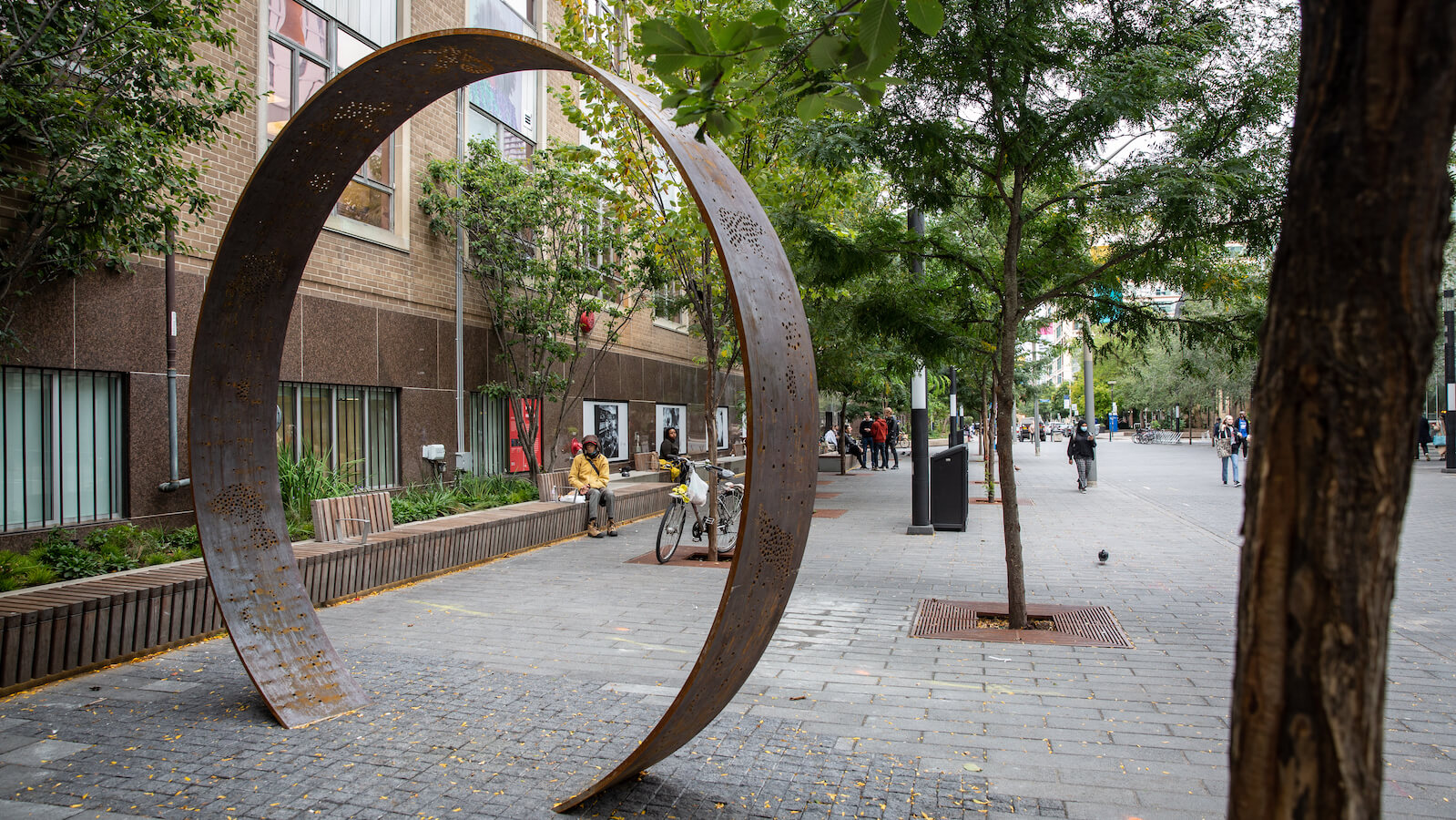 A Corten-Steel Circle Honours the Dish With One Spoon Territory

Neither the university nor the artwork has a name. As for the latter, it’s a striking three-metre-high steel sculpture mounted just east of where Gould Street meets Nelson Mandela Walk in downtown Tkaronto (Toronto).

“We’ve taken to affectionately calling it ‘The Ring’,” says Two Row Architect Principal Matthew Hickey, describing the circular installation he designed with Jacqueline Daniel and the university’s Indigenous community. Unveiled just ahead of Canada’s National Day for Truth and Reconciliation, it honours the Dish With One Spoon Territory on which the colonial metropolis was built.

As for the school? It was founded in 1948 as Ryerson University, after Egerton Ryerson, a 19th-century Methodist educator whose writings guided the creation of Canada’s genocidal residential school system for Indigenous Peoples. Following discoveries this year of over 1,300 unmarked graves in former residential schools across Canada — and the subsequent toppling of Egerton Ryerson’s campus statue in protest — the university announced that it will be renamed, though its new identity has yet to be decided. 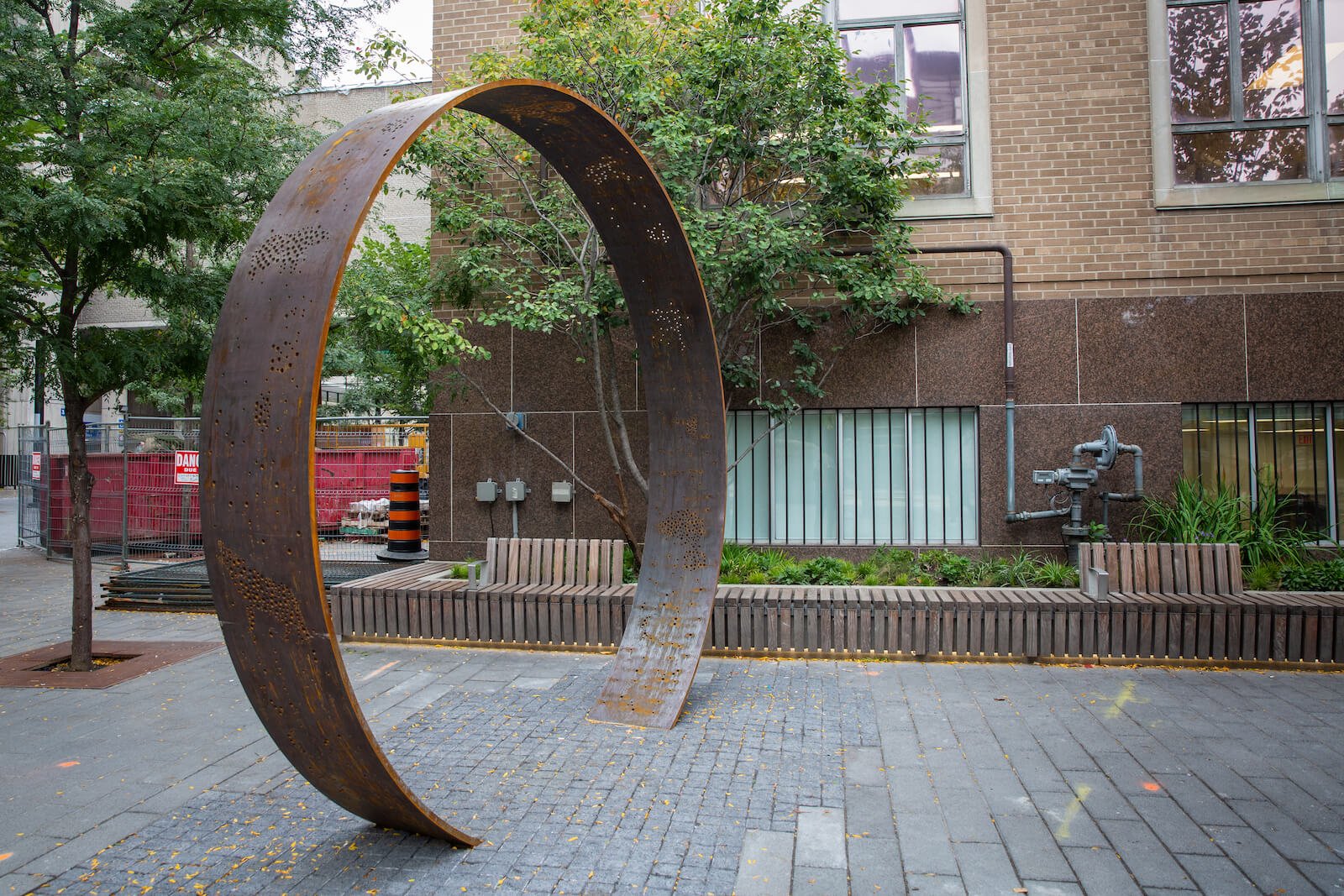 While the school’s lack of name reflects a temporary institutional limbo, the absence of a formal title for Two Row’s sculpture has a more intentional genesis. As Hickey explains, the installation is “the culmination of a process that began well before the university’s decision,” beginning as part of a larger project to adopt recommendations from the university’s own Truth and Reconciliation Report from 2018.

That year, Two Row was commissioned to help facilitate a year-long consultation process that would shape the creation of a public land acknowledgement to recognize the site’s Indigenous history. “Comprising Indigenous students, staff, faculty and elders, the group convened a series of Talking Circles, followed by smaller sessions where ideas were refined,” Hickey explains.

“Initially, the university was thinking about installing a plaque,” says Hickey, “but we felt that would reflect a colonial mindset.” Instead of sharing a lineage with the commemorations to colonial conquest that still comprise many historical plaques, Two Row and the school’s Indigenous community championed “a more universal and inclusive visual language,” but one firmly grounded in Indigenous teachings. 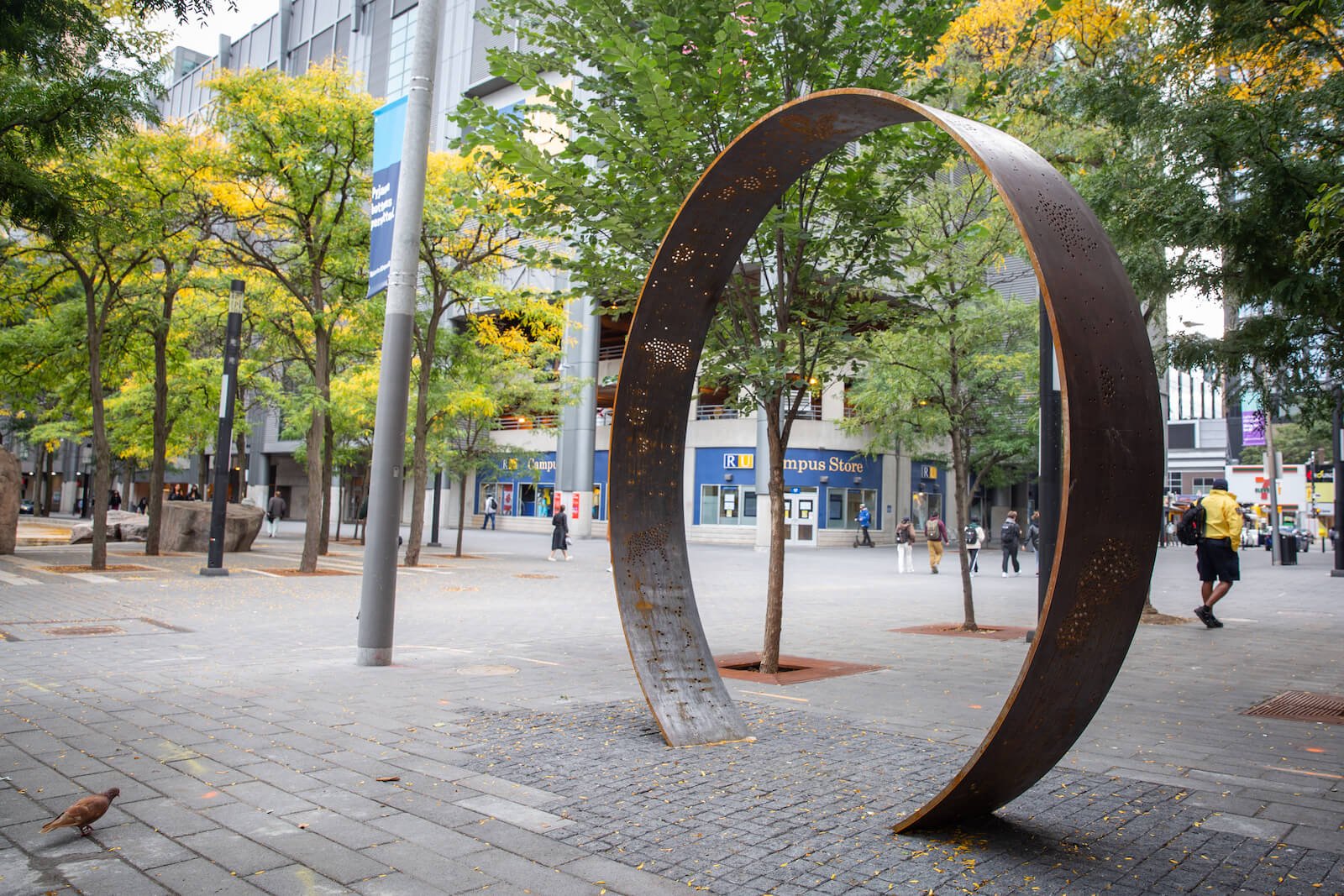 The result is a Corten-steel design perforated with a series of pictographs that represent the Anishinaabe Seven Grandparent teachings. “Passed down from generation to generation, First Nations communities have long referred to the Seven Grandparent teachings as a guide for their cultural foundation, human conduct and survival,” explains Joanne Okimawininew Dallaire, elder (Ke Shay Hayo) and co-chair of Ryerson’s Truth and Reconciliation Strategic Working Group — and a Talking Circle participant.

Depicting the animal symbols that correspond with each of the Seven Grandparent teachings, the pictographs are surrounded by stars and lunar cycles that align with celestial bodies.

The ring itself is also oriented according to the cardinal directions: the path through the ring faces true east, representing creation and recreation, and true west, representing knowledge and wisdom. 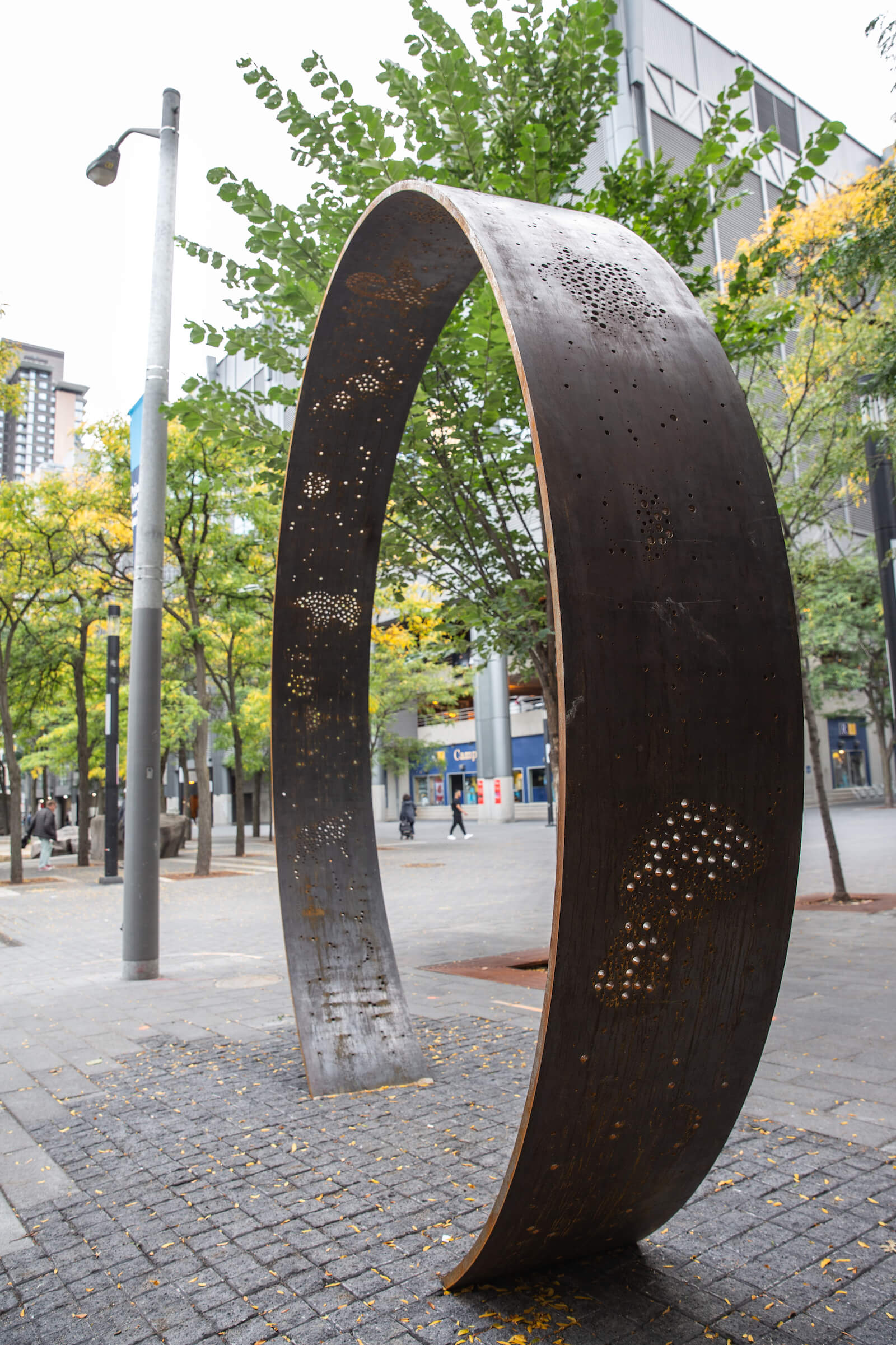 For Two Row, an Indigenous-owned and operated firm headquartered on the Six Nations of the Grand River reserve, the installation is rooted in an effort to decolonize both the Tkaronto landscape and the design process. “This is not from me and Jacqueline,” says Hickey, describing the design as the fruit of a collaborative, community-driven process. “Two Row is just a facilitator, and the result emerges from the ideas we gathered. The more people we spoke to, the more consultation we had, the easier it was to design this.”

Just as Two Row consciously resists the colonial paradigm of sole architectural authorship, “The Ring” has — so far — avoided the attachment of a formal label. “Maybe it will one day have an official name,” Hickey muses, “but it doesn’t necessarily need one, and it certainly doesn’t need an explanatory plaque next to it.” In lieu of an officially branded, quantifiable and SEO-friendly campus icon, the sculpture is an elemental presence on the landscape. “It feels like it’s always been there,” says Hickey. And like it always will.