A Digital Culture Lab in an Old Sawmill
In Madrid, Langarita Navarro Arquitectos have inserted a colour-morphing volume - which they call “The Thing” - into a 1920s building to create a new creative hub. 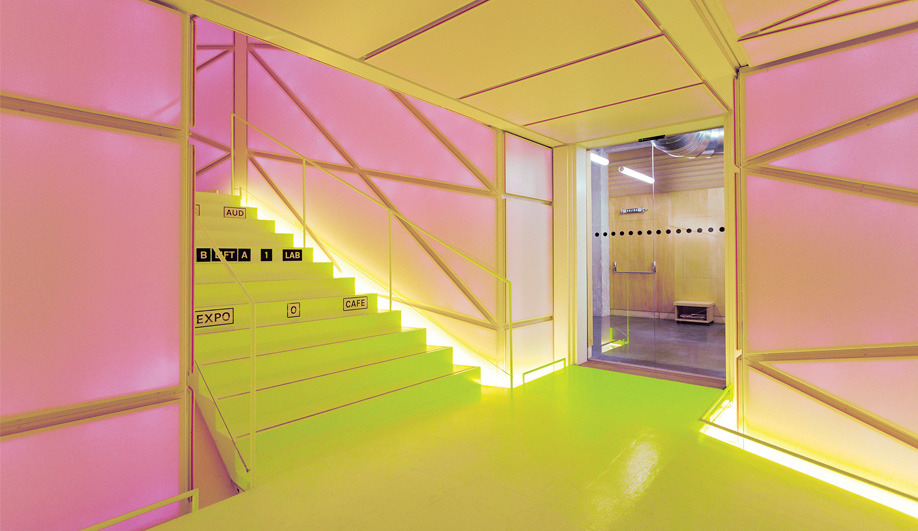 The mesh of LEDs in each panel can be programmed with a computer. “It’s designed for artistic intervention,” says architect Víctor Navarro. 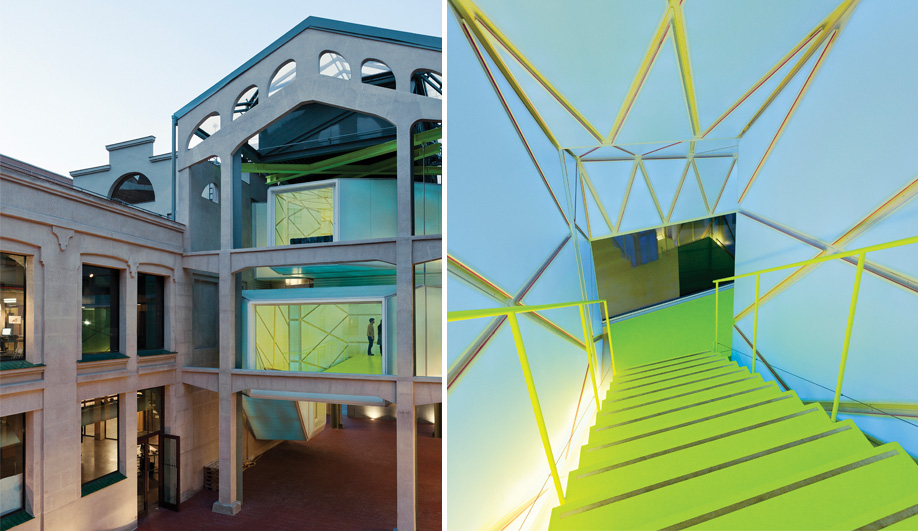 Left: “The Thing,” inserted within the original 1920s building, is suspended by I‑beams and Macalloy cables. Right: Five flights of steel stairs are covered in a pattern of rhomboid canvas panels embedded with LEDs. 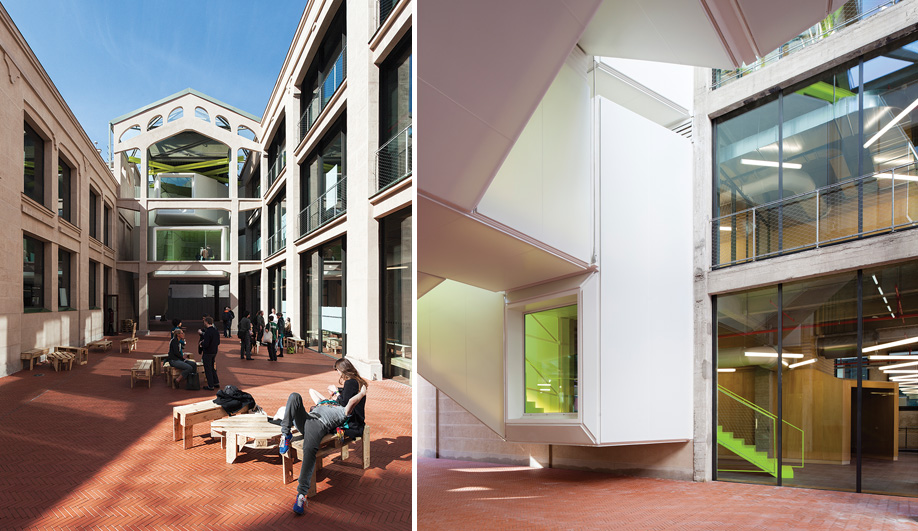 Left: The red-brick courtyard faces onto a busy street, and offers rnan inviting spot to just hang out. Right: Visitors can access the central stair via stairways within the adjacent buildings. 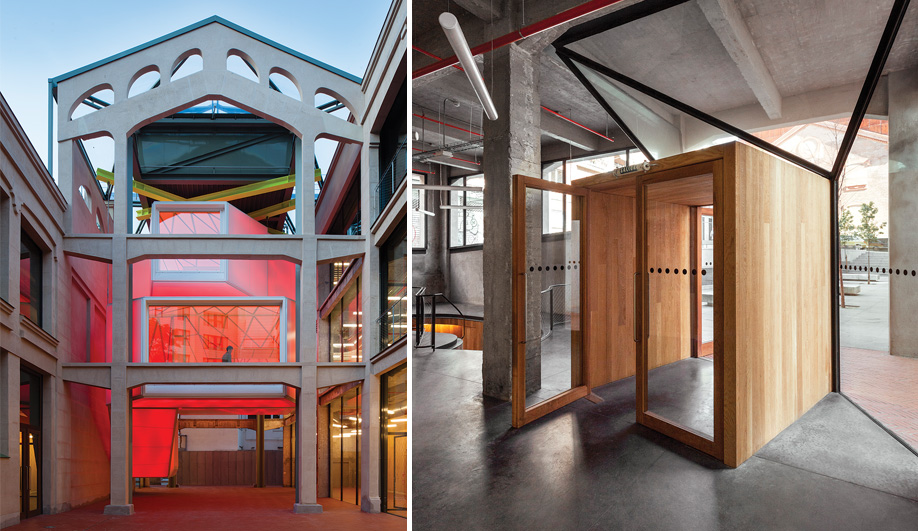 Left: The architects played up the contrast of old and new by only using lightweight, removable materials. Right: Smaller elements and insertions within the building, like this encased entryway, visually unify the project. 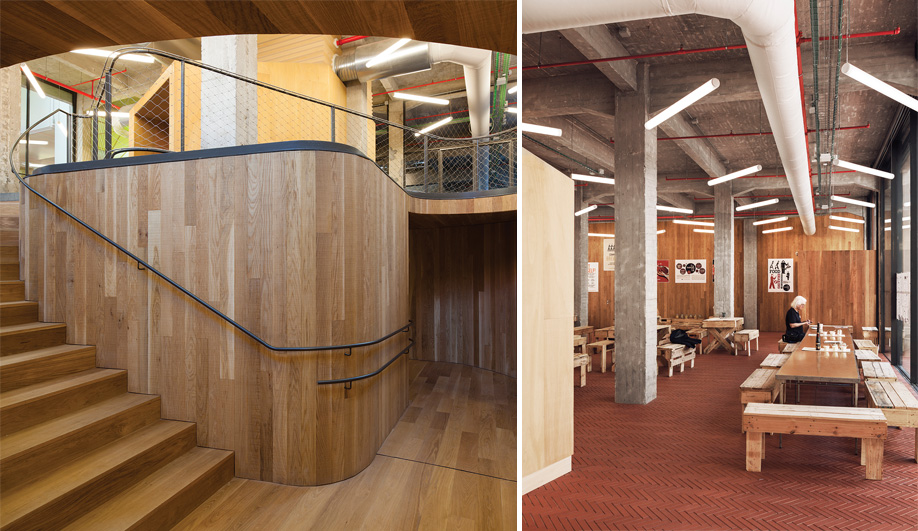 Left: Most of the building was stripped to its original surfaces, with new mechanical additions and stairways clad in birch. Right: One of the lab’s various multi-purpose rooms, fur­nished with rudimentary worktables and benches. 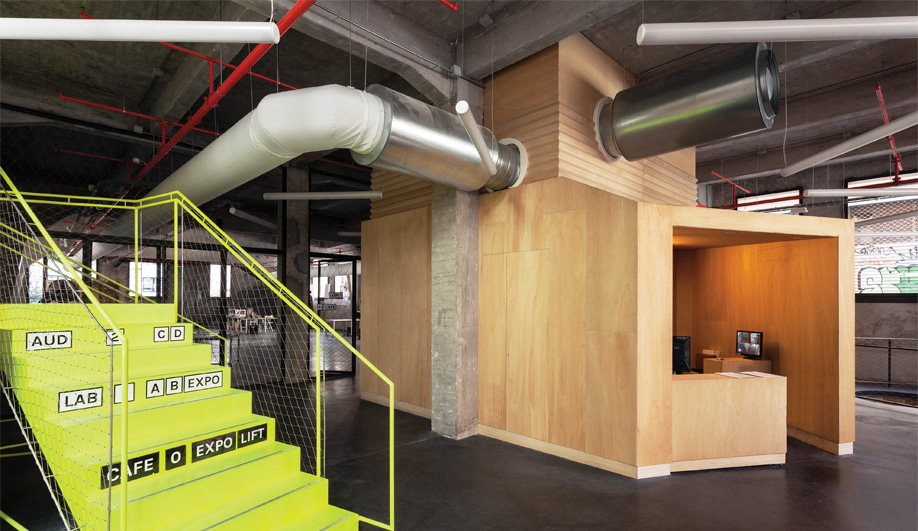 One thing becomes immediately apparent when approaching MediaLab-Prado. There is no confusing old with new. The architectural contrast of La Serrería Belga (the Belgian Sawmill) – among the first buildings in Madrid constructed from reinforced concrete – and “the Thing,” which is how architects María Langarita and Víctor Navarro refer to their intervention, is stark indeed: aged, cast-in-place concrete versus a neon-hued stair tower embedded with colour-changing LEDs. The two extremes seem like character foils in an action movie (the Thing was actually inspired by the video game Street Fighter ).

“To modernize the serrería, we wanted to complement the existing structure with something radically different, something lightweight as opposed to heavy, and dismountable as opposed to permanent,” said Navarro during a recent tour of the building, which opened to the public in April.

Besides the luminous stairwell, the Thing contains other, albeit more understated, insertions throughout the U‑shaped complex. Vertical birch planks, for instance, cover some of the mechanical and electrical upgrades and the various facilities. Entryways sport boxy wooden frames around glass doors, to give them more definition and so visitors can experience a grander sense of entering the space. The stairwell, though, is what grabs the eye, resembling a living creature cocooned in a concrete shell.

Local firm Langarita Navarro Arquitectos is well known for bringing a particular kind of playful drama to its projects. A recent design for the Red Bull Music Academy in Madrid – with soundproof studios built out of sandbags, and wild gardens surrounding wooden A-frame spaces – earned a special mention last year from the Mies van der Rohe Awards, which are handed out biannually in Barcelona. At 4,500 square metres, MediaLab-Prado is the eight-year-old firm’s largest, most complex project to date.

Funded by the city, the lab is intended to spark creative interactions through a mixed bag of workshops, residencies and multimedia experimentation in the digital field. Visitors, in turn, are encouraged to participate actively. In that regard, MediaLab-Prado serves as a foil to the cultural institutions that surround it, such as the Prado, Reina Sofía, and Thyssen museums.

By comparison, admission here is free, and the central courtyard provides an inviting, tranquil pathway through an otherwise densely built city block. The grounds, defined by red brick pavers laid in a herringbone pattern, are just one of many features that make the place welcoming and accessible. The café has a kitchen island anyone can use, and one of the basement areas contains 3‑D printing equipment, available for public use.

However, the biggest sign that the space is designed for innovative thinking is the stair tower suspended within the old sawmill’s central gabled building. To create the insertion, the architects stripped the three-storey structure down to the beams and columns and installed two criss-crossed I‑beams at the roofline, with Macalloy cables to hold the stair frame in place. The steps rise five levels, and are clad inside and out with a dramatic pattern of rhomboid panels made from stretched canvas. These are embedded with a programmable mesh of LEDs that gently transition between shades of green and blue to warm pinks and reds.

Within the adjoining buildings, Langarita and Navarro added accent features to visually link the lab’s raw open spaces back to the central stair. Utility chase ways sport bright green electrical wiring and fire engine red sprinkler pipes, and industrial metal steps are painted in matching phosphorescent yellow. In the attic of one building, three furnished apartments are in use by artists-in-residence.

The rest of the building remains minimally restored, to reveal the original concrete construction. “It is merely a layer we’ve added,” says Navarro of the Thing. “The intention is for this space to accept more layers and transformations in the future.”