A Fine Balance
An earthquake-ravaged medieval tower in Umbria, Italy, is reimagined with a dramatic steel spine. 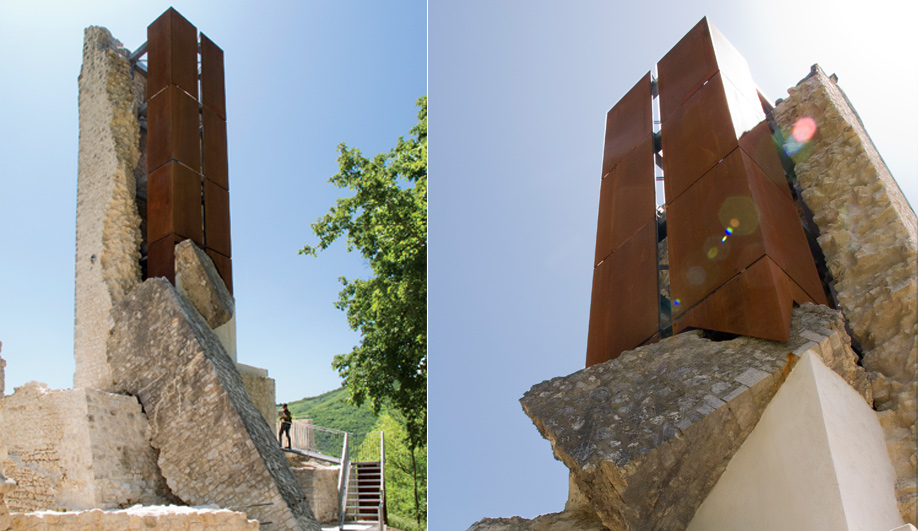 The 680-kilogram Corten brace holds the monumental tower’s ruins together.

On September 26, 1997, a magnitude 5.5 earthquake struck the Italian region of Umbria, killing 10 people and leaving several medieval structures in ruin. Among them was the Tower of Triponzo, which became a symbol of local grief. After hearing of the disaster, German architect Martin Stubenrauch set out to restore the tower, as a tribute to the earthquake victims. But his goodwill project would be fraught with controversy and logistical nightmares.

After he received state funding and the blessing of several bureaucratic authorities, his design drew outrage from the locals. Instead of demolishing and rebuilding the tower, he and his collaborators – architect Moreno Orazi and engineer Fabrizio Menghini – kept the ruins, planning to support their weight via a spine-like steel structure with exterior Corten bracing, which would climb what used to be the tower’s central shaft – an elegant, functional design, without ornament. “People hated me for it,” says Stubenrauch. “No tower of the fifty that once existed ever got funding for revitalization. And I had decided to leave the ruin, monumentalizing their tragedy.”

There was also danger in stabilizing the crumbling structure. Using cranes with baskets, the crew had to secure each of the loose stones – some the size of boulders – from top to bottom, tying the walls together with nylon ropes. “We were terrorized,” said Stubenrauch. “When the first major tremor hit, we had consolidated the walls but had not placed the steel support. Four workers were up on the scaffolding when the entire thing was moving like a swing.” They then drilled eight holes 20 metres deep into the tower’s solid rock foundation, enabling them to install the 680-­kilogram Corten brace.

With the work now complete, Stu­benrauch looks on his 12-year passion project with pride. “It’s beautiful to see that people have started to understand the inner logic of the work,” he says. From its inception, the tower revitalization has represented humanity’s resolve against nature’s destructive forces. One can now say that it also symbolizes the resolve of an uncompromising architect.