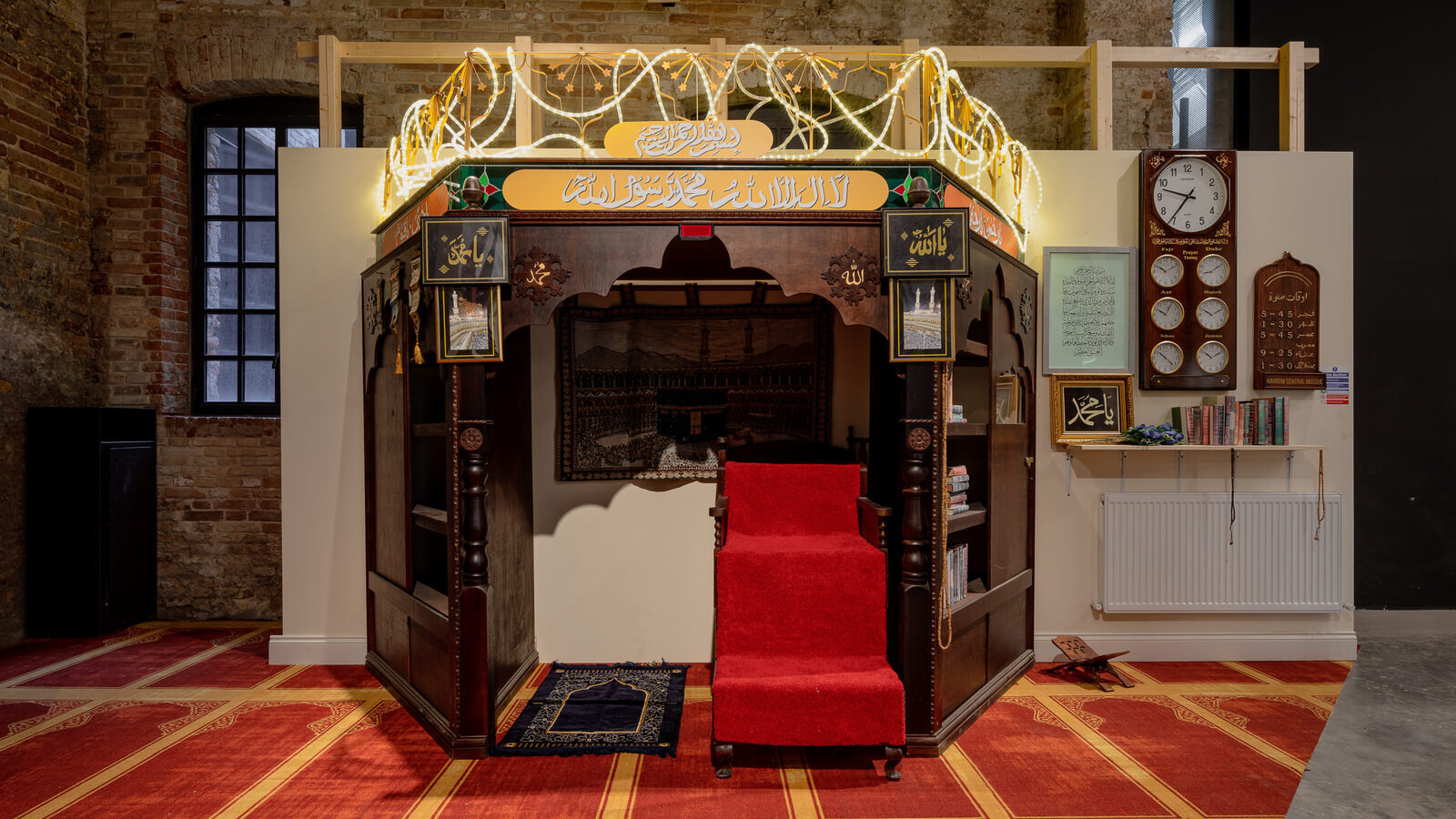 The history of architecture is told through fragments. From the artifacts lining the walls of Sir John Soane’s house-museum to the early presentations of architecture in America and the archival-driven mountings of today, the curators of London’s Victoria & Albert Museum are keenly aware of this fact. Since 2016, the institution has organized its own exhibition within the larger showcase of the Venice Architecture Biennale as part of the Applied Arts Pavilion Special Project. For the third edition, the British institution tapped architect, researcher and author Shahed Saleem of Makespace to collaborate on what would become “Three British Mosques” — a proto-archeology of adapted structures of worship in the country. 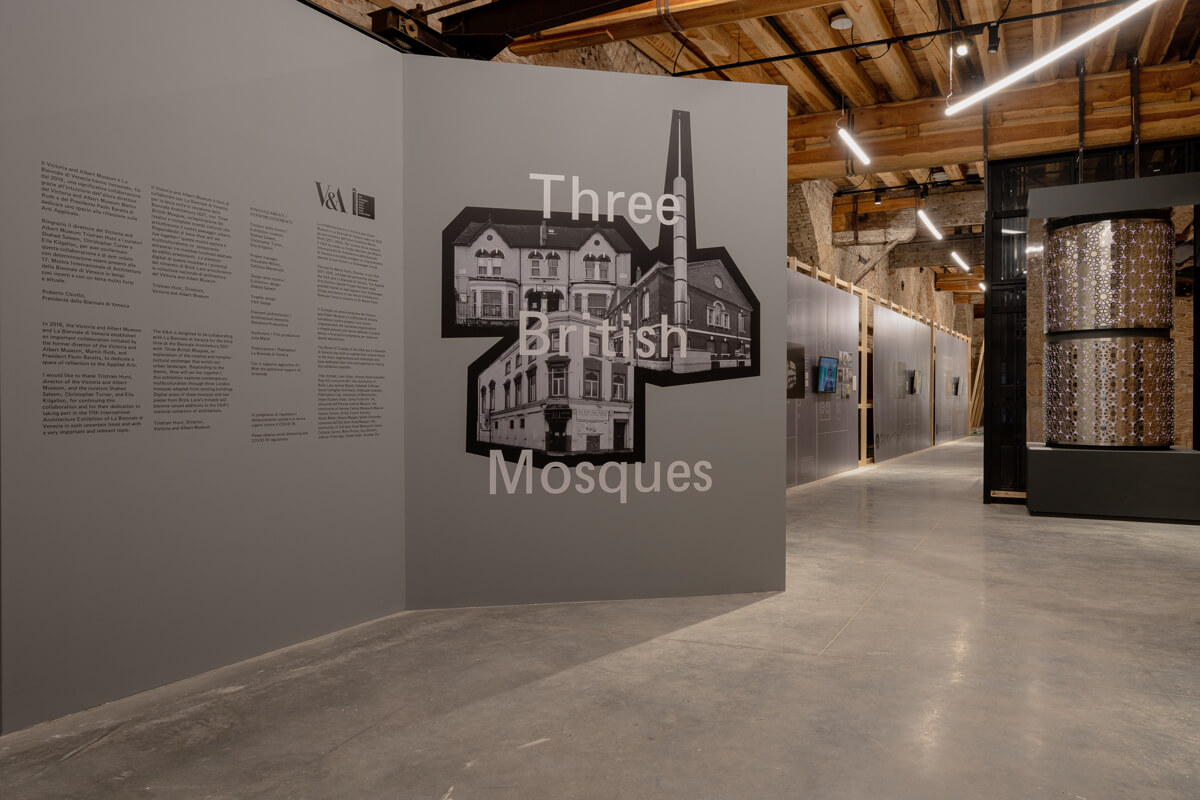 Taking the earliest known mosque in Britain — an 1889 renovation of a terraced house Liverpool — as a departure point, Saleem, with curators Christopher Turner and Ella Kilgallon, created full-scale replicas of three improvised spaces of the over 1,800 sites in Britain used by the Bangladeshi, Nigerian and Pakistani communities. “Most mosques in Britain are grass-roots, crowdsourced, community projects,” explain the curators, “that exemplify creative reuse.” Combining near-forensic accuracy with drawings, interviews and photographic documentation, the three-part installation delves into the depths of adaptation and appropriation as strategies of community building. 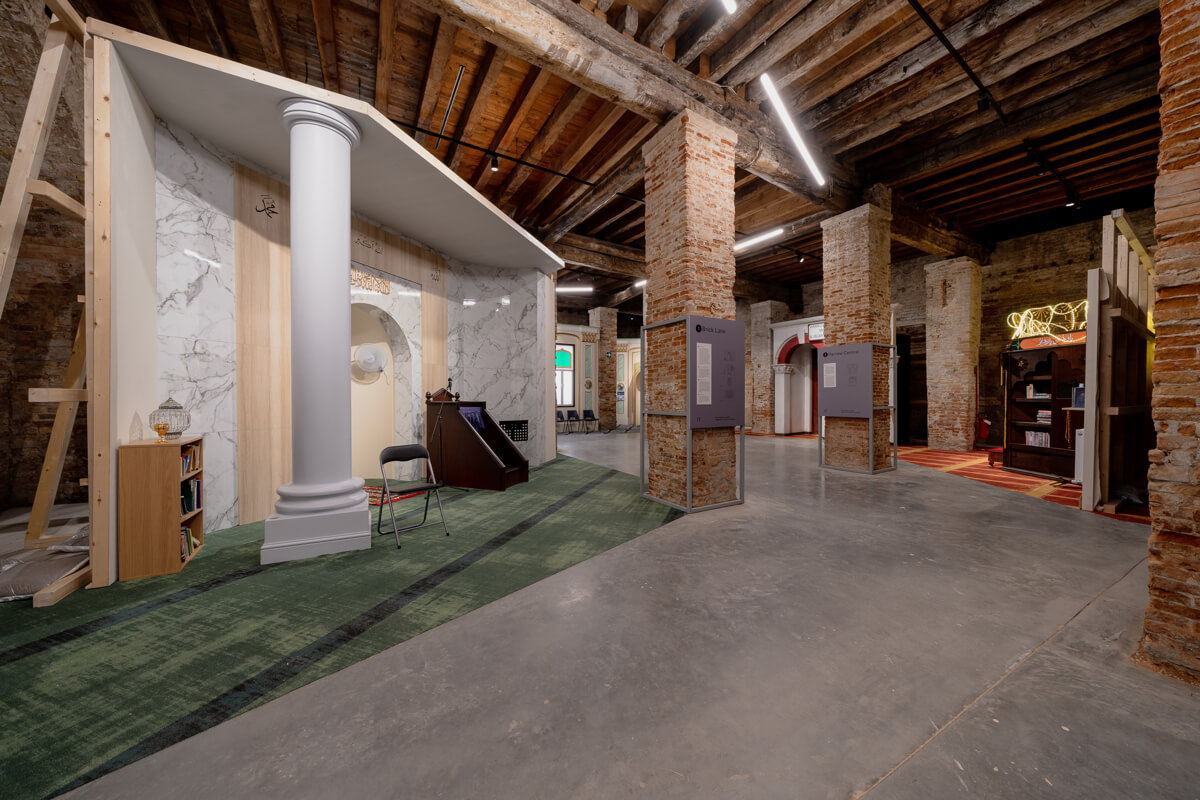 The first full-scale recording centres on the two-storey Brick Street mosque, a former Protestant chapel turned synagogue in London’s Whitechapel neighbourhood. In each, the mihrab (a niche within the mosque that points towards Mecca) is highlighted. 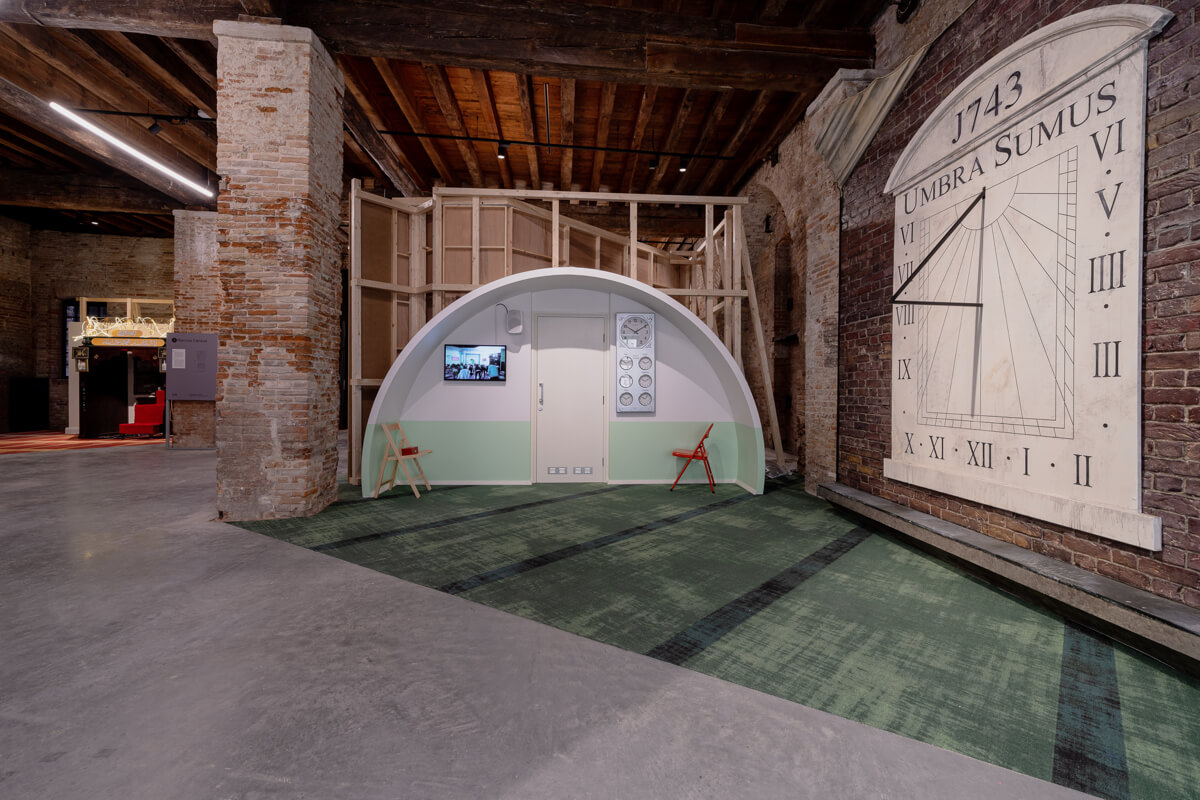 Here, the marble-clad archway — complete with a model of one of the doric columns of the central hall and a replica of its carpeting — is placed in front of a semi-circular portal. Hints of the wood substructure beyond nod to their fabricated nature, while a didactic panel across features scans of the structure coupled with additional drawings and interviews to unpack these strange yet familiar architectural elements. 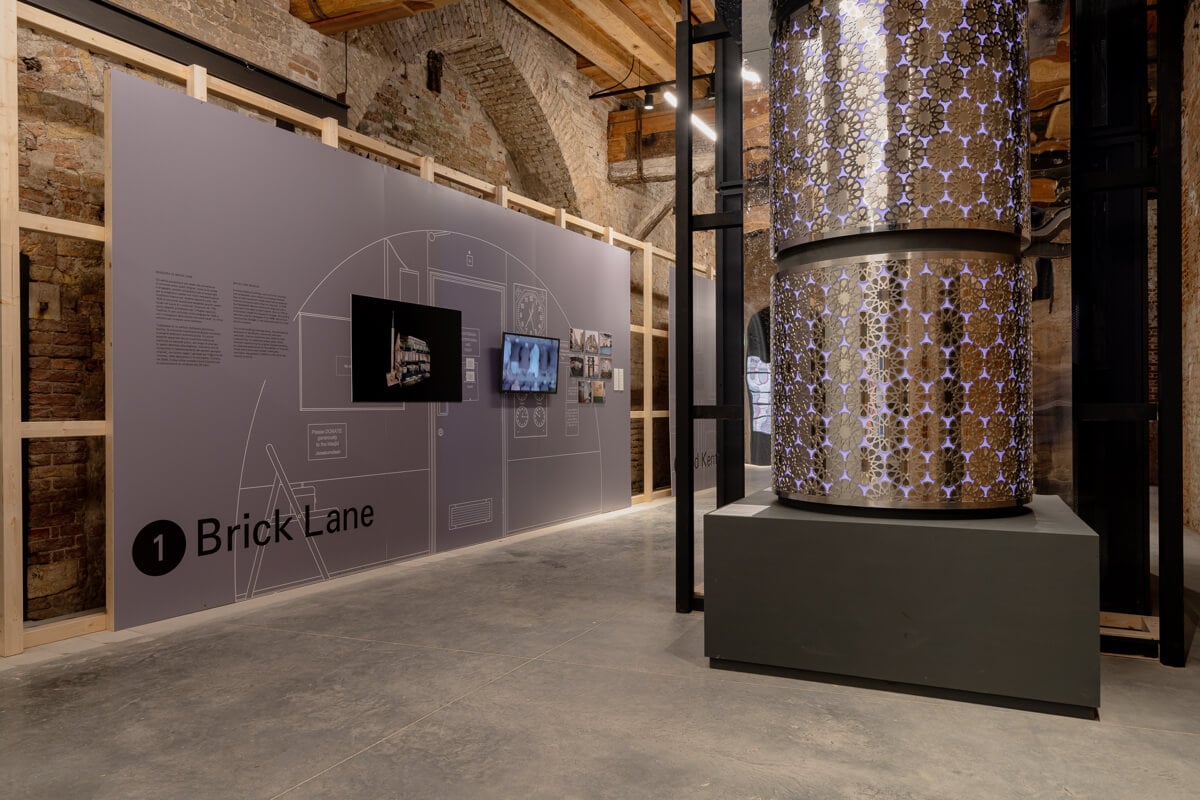 Nearby, Saleem also included the building’s monumental exterior column, enclosed in an intricate geometric sheath, as well as the sundial that tops the building to similarly relay the ways in which the Bangladeshi Muslim community has strategically reimagined the base building as a reflection of their cultural and religious values. 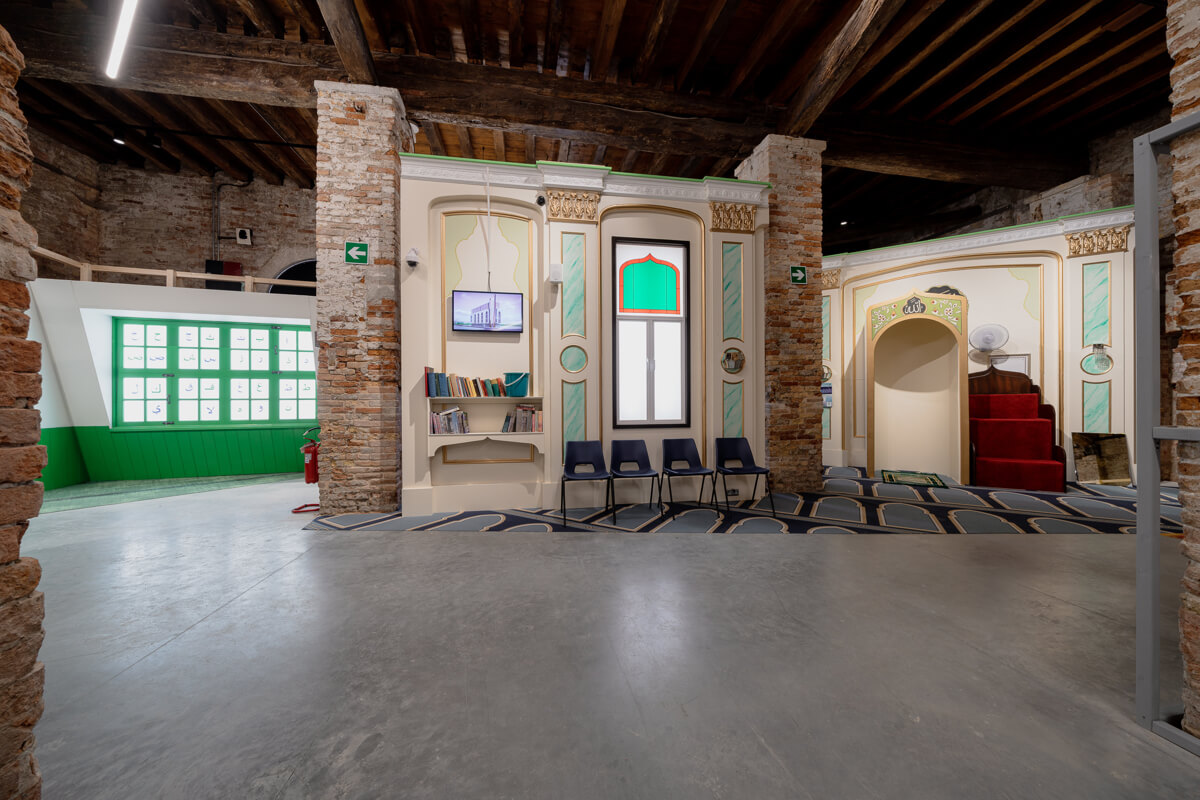 The second installation adds to this premise, centring on a place of worship along Old Kent Road in the Bermondsey neighbourhood patronized by London’s Nigerian community. In addition to documentary photography of the three-storey structure, two walls of the former pub appear in the exhibition hall. Their intricate mouldings and golden corinthian capital-topped pilasters are juxtaposed against ogee arches, quatrefoil carpeting and other details that capture the nuances of the architectural appropriation. 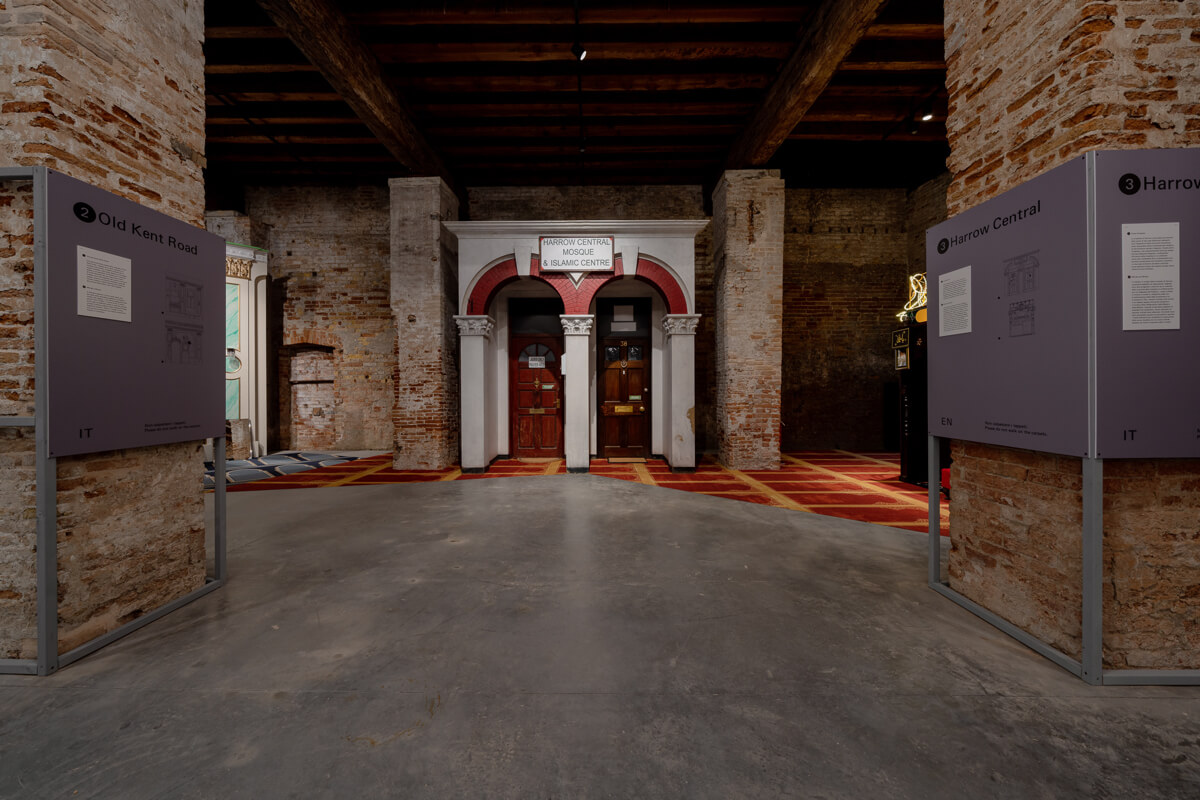 An analysis of two converted semi-detached homes in Harrow, a community absorbed as part of Greater London, rounds out the project. Alongside charming artifacts that reflect its residential context, namely a pair of entrance doors recessed behind a pair of classicizing arches, the intricate dark wood mihrab captures the shared strategies leveraged by the Pakistani communtiy. 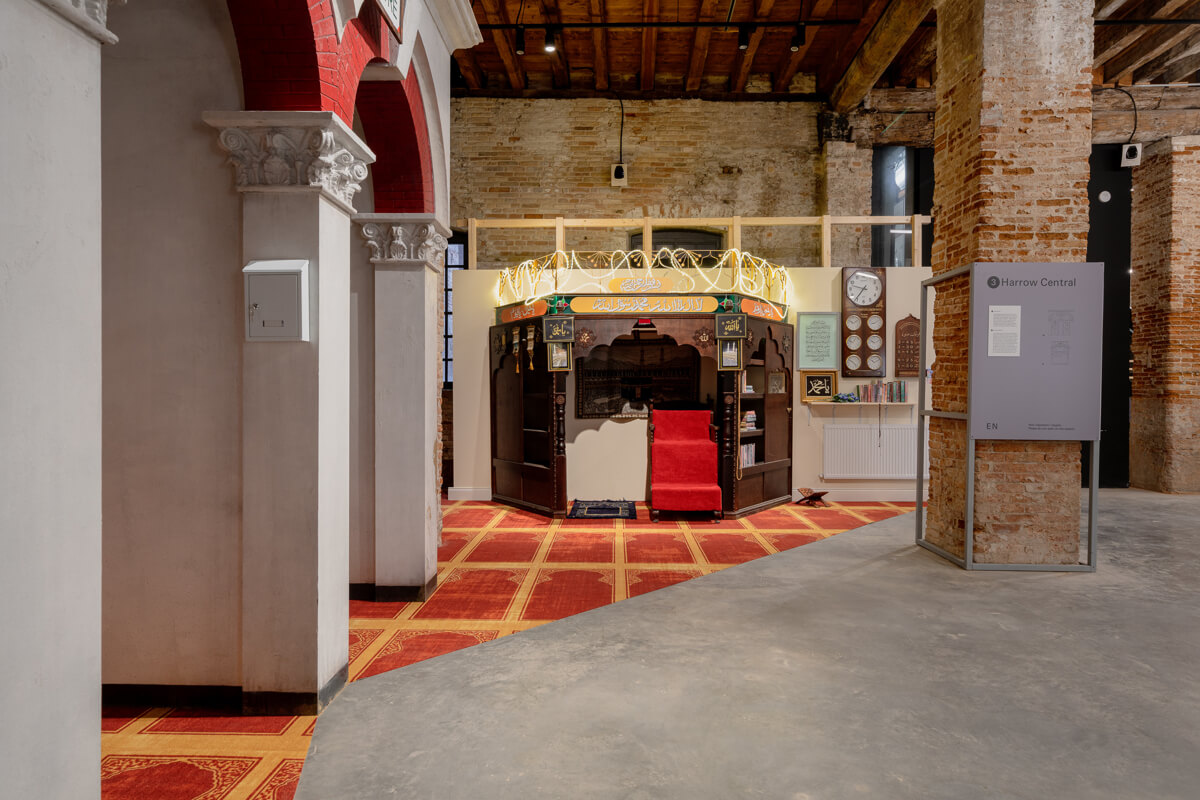 Together, “Three British Mosques” not only highlights the portability and malleability of Islam itself, but the unique spatial strategies that are coupled with the movement of ideas and people from place to place. Though the exhibition represents only a fraction of Saleem’s research into such structures in the U.K., it’s a compelling look at the architectures of migration and a reminder of the latent potential for transformation inherent in everything from a house to a pub.