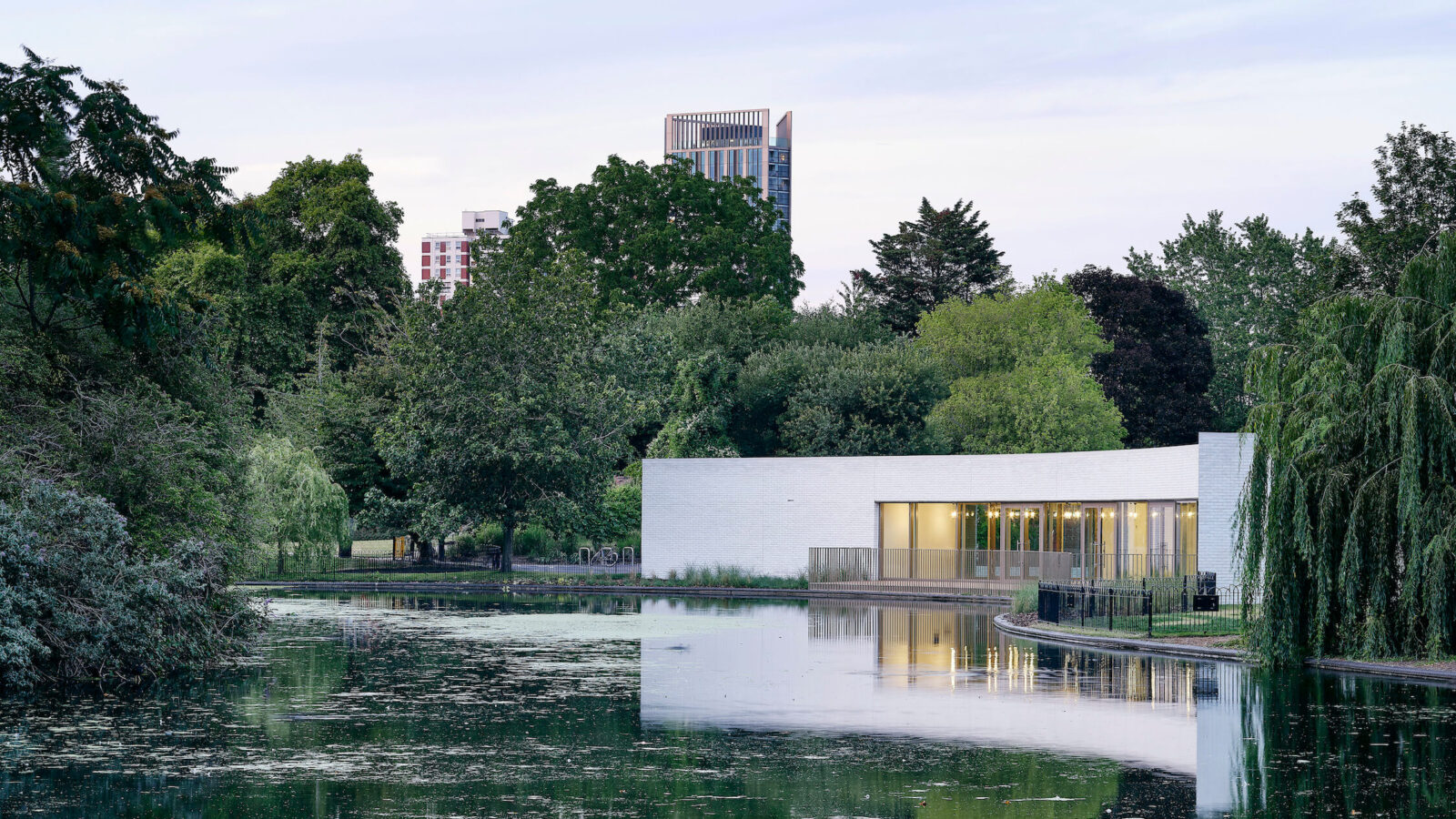 Bell Phillips Architects introduces an elegant gathering spot that feels of a piece with the landscape.

At the turn of the year, the final touches were still being applied to the interior spaces of the new pavilion at the heart of Rotherhithe’s Southwark Park in southeast London. The café, offices and public amenities were being readied for their official opening in early February. From the park, however, the pavilion already felt of a piece with the landscape around it. It’s a testament to the contextual refinement of Bell Phillips Architects‘ elegant new design in southeast London. Clad in white brick, the single-storey building follows the contours of the park’s walking paths and small lake.

The four-metre-tall structure stakes a humble presence that takes its cues from the landscape around it. Triangular in form, the pavilion meets the park from multiple vantage points with a softly curved face. While the café overlooks the lake to the west, public washrooms and back-of-house uses are accessed via the slightly quieter east frontage.

Viewed from across the lake, the pavilion’s curves seem to melt into the topography. By contrast, the white brick facade stands apart from its natural surroundings with an almost immaculately monolithic presence. Thanks to its rigorous material simplicity, however, it does not overwhelm its setting.

“Our aim for the Southwark Park Pavilion was to create a distinct addition to the historic park,” says Hari Phillips, director at Bell Phillips Architects. “Through our collaboration with local residents, and our attention to the existing qualities of the site, we believe we have done that.”

The building is the centrepiece of a larger masterplan for the park, which is being led by Kinnear Landscape Architects (KLA). KLA also oversaw the landscaping that frames the building, deftly extending its gathering spaces into the park. Neighbouring the pavilion, the park also features a small artist-led gallery devoted to contemporary works, with the older cultural hub now complemented by a more casual hangout and gathering spot.

“For us the pavilion is about excitement and delight, and we hope that future users can benefit for years to come,” says Phillips.

Bell Phillips Architects introduces an elegant gathering spot that feels of a piece with the landscape.