A Big Hit in Europe, Sweden’s Solar Egg Lands in North America
Bigert & Bergström's monumental sculpture-cum-sauna will be in Minneapolis until April 28. 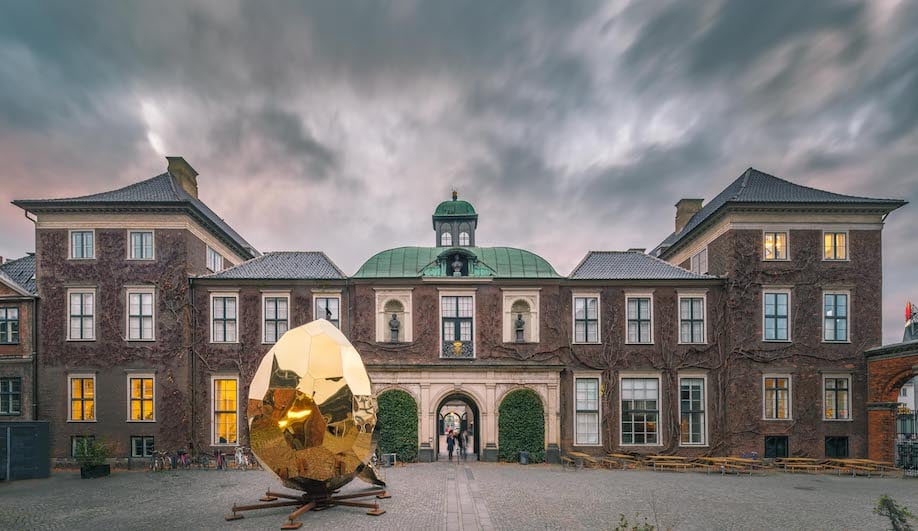 Since Sweden’s instantly iconic Solar Egg was erected on a windswept site in Lapland in 2017, it has travelled to such cities as Copenhagen and Paris, drawing both design lovers and health buffs (the sculpture is also a functioning sauna) in the process. 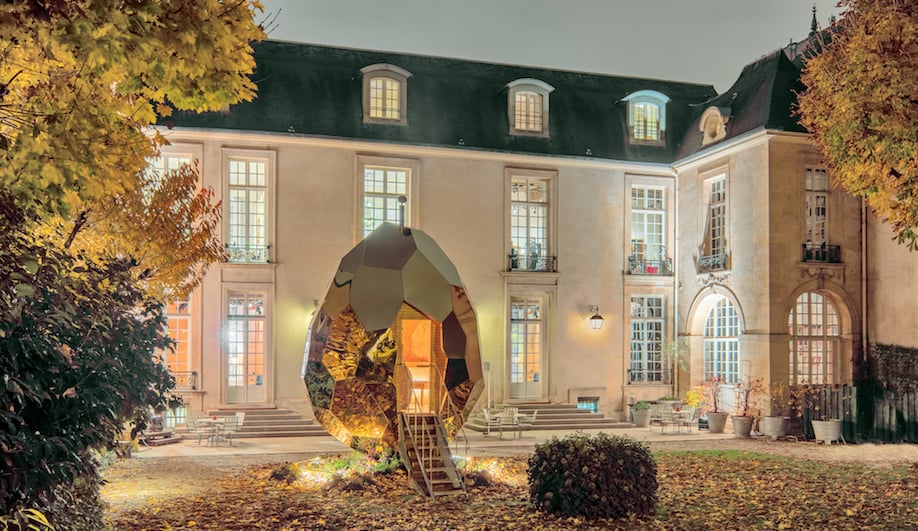 Before coming to America, the five-metre-high Solar Egg alighted in France.

Now, the five-metre-tall, gold-toned installation by artists Mats Bigert and Lars Bergström is making its North American debut, having landed at the American Swedish Institute in Minneapolis for an extended stay. Its transatlantic crossing marks the first time that the work has left Europe. The Egg will sit in the ASI’s outdoor courtyard until April 28.

“We are thrilled to put it on display in the U.S. for the very first time, welcoming visitors to take a traditional Swedish sauna bath,” says Mathias Sandberg, head of marketing and sales at Riksbyggen, a cooperative company that develops new housing in Sweden. 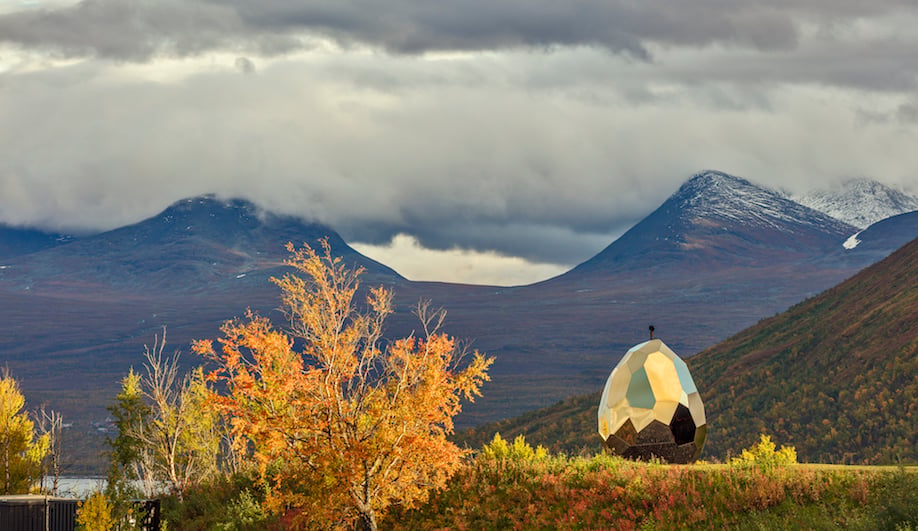 Designed by Bigert & Bergström, the Egg was first installed in Kiruna, Sweden.

Riksbyggen had initially commissioned the sculpture for the town of Kiruna, a remote northern mining community that is currently being relocated in its entirety because of unstable ground and other environmental hazards at its original site.

Boasting a faceted reflective exterior made of stainless gold mirror sheeting and a wood-paneled interior anchored by a wood-fired, heart-shaped stove, the structure was designed to bring both physical and emotional succor to the transplanted citizens of the town, serving as both “a chamber for conversation” and “a symbol of new beginnings.” 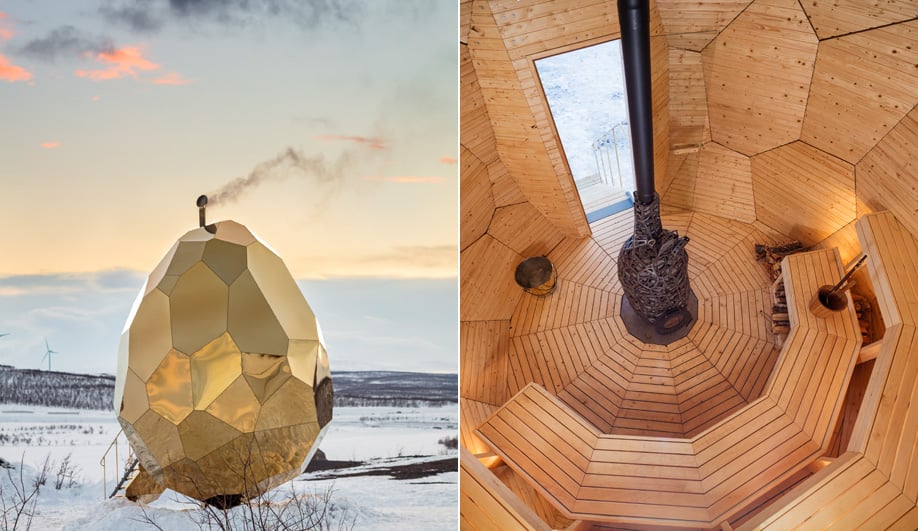 The faceted golden structure contains a wood-fired sauna inside. Photos by Jean-Baptiste Béranger

“One of the reasons Riksbyggen commissioned the Solar Egg from Bigert & Bergström was to put Kiruna on the map,” says Sandberg. “In this [goal], we have surpassed all our expectations.”

In preparation for its American sojourn, the Egg was disassembled in Europe and crossed the Atlantic in pieces. Reassembling its 69 golden plates required 1,512 bolts and took four to five days. 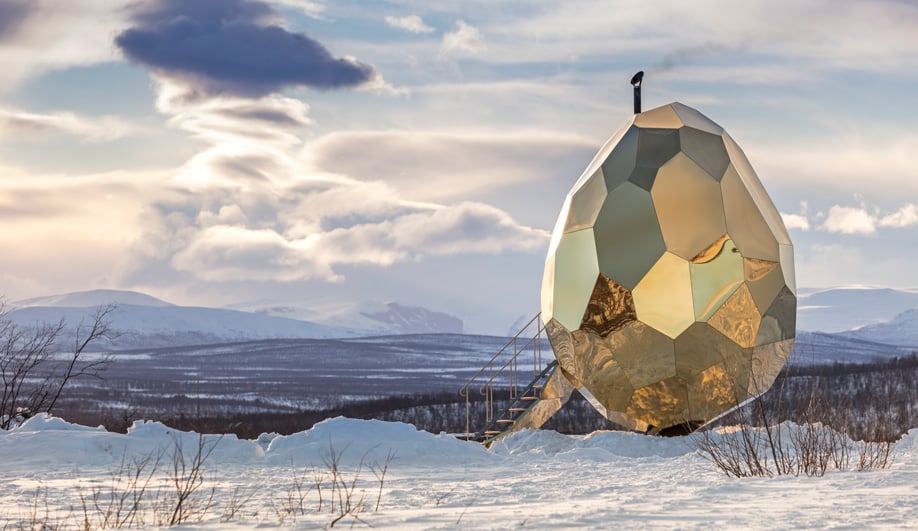 In Kiruna, the Egg served as a place for conversation and a symbol of new beginnings. Photo by Jean-Baptiste Béranger

Bigert & Bergström, whose experiential public works are frequently centred around environmental and climate-change issues, were on hand for the ASI unveiling on March 6 and 7, when they helped fire up the sauna stove and screened two of their climate-based films.

For the rest of the Egg’s stay in Minnesota, visitors will be able to book sauna sessions (the wood burners provide a “comfortable” 176° F setting, museum officials say) via the ASI website. The ASI is located at 2600 Park Avenue near downtown Minneapolis.