A Lacy Addition to a Marseilles Museum
Rudy Ricciotti's bold new building - wrapped in a delicate veil of ultra-tough concrete - brings the Museum of Civilisations into the modern era. 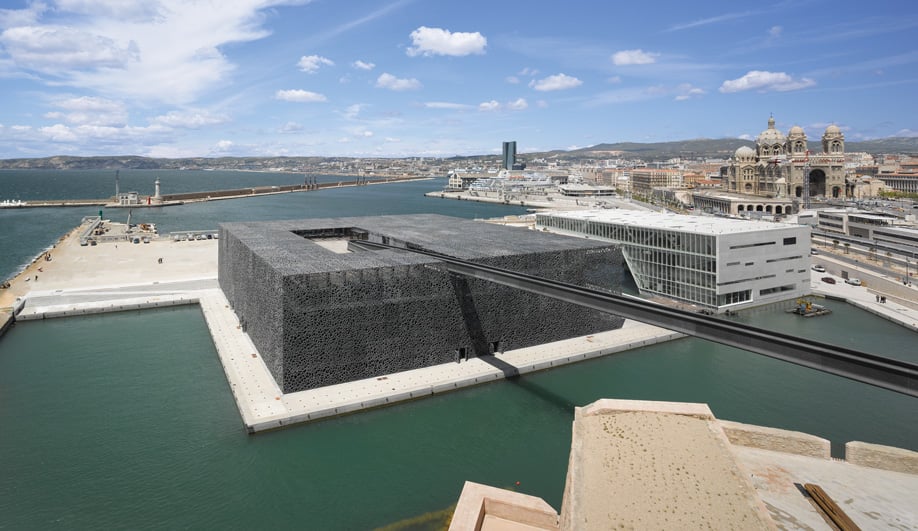 A vertiginous footbridge connects the new structure to Fort Saint-Jean. 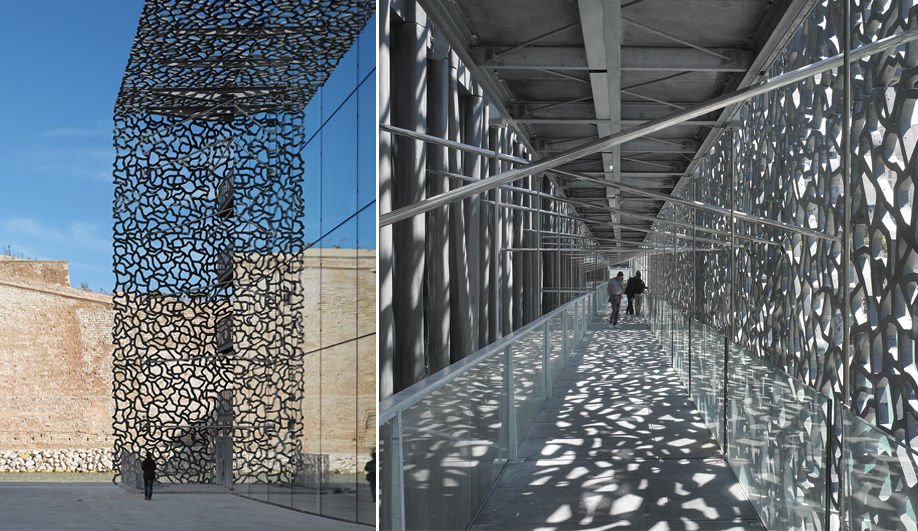 Left: Veil-like concrete cladding envelops the glass box of the museum. Right: One of the circulation routes that wind through the facility.

Where the city meets the sea in Marseilles, France, a new building by architect Rudy Ricciotti, in collaboration with Roland Carta, stands in dramatic contrast to its heavily reinforced neighbour, Fort Saint-Jean, which was built in the 1660s to deter revolutionaries. Infinitely more porous than its pre­decessor, the strict square box is sheathed in a diaphanous curtain of free-form concrete that recalls local fishermen’s nets.

Despite the obvious juxtaposition, both buildings constitute part of the new Museum of Civilisations from Europe and the Mediterranean (MuCEM), which has some 250,000 objects in its collection, from 16th‑century reliquaries to a Pink Floyd mixing console. Tying the structures together, a 115-metre-long, vertigo-inducing ribbon of a footbridge offers a sky-high stroll above the port; and a third building nearby serves as the museum’s conservation centre.

Although the 15,500-square-metre addition, named J4, is undeniably eye catching, the architects sought to defer to the area’s historical architecture. “MuCEM’s dematerialization is in response to the massiveness of the fortifications,” says Ricciotti. “The result is friendly with Fort Saint-Jean.”

The concrete’s matte finish is subdued, he notes, and the overall form doesn’t cry out for attention. Yet the addition stands out among other recent architectural developments. As the European Capital of Culture 2013, Marseilles has inaugurated several striking new projects, including the Vieux Port pavilion by London’s Foster + Partners, and the Villa Méditerranée by Milan’s Boeri Studio.

While the city’s history shaped it, J4 also showcases contemporary French material technology, says Ricciotti. It is constructed largely from ultra-high-performance concrete, a French invention by Ductal Lafarge. Stronger, more watertight, and more versatile than the ordinary kind, the substance was pushed to its limits on this project. “It follows a long chain of expertise, from concrete chemists and structural engineers to prefab and pre-loading specialists,” he says.

Beneath the lacy curtain, circulation ramps wind around the building’s heart, an interior glass box supported by a branching concrete structure. Within that transparent container are two levels of permanent and temporary exhibition spaces, a 325-seat auditorium, a bookstore, a restaurant, and administrative areas. In the end, says Ricciotti, J4 is unmistakably of its place: “It is bony, feminine, fragile and mannered – also provincial, local, Provençal.”

SHARE
Twitter, Facebook, LinkedIn, Pinterest, Email
TAGS
Commercial, Cultural,
AZURE is an independent magazine working to bring you the best in design, architecture and interiors. We rely on advertising revenue to support the creative content on our site. Please consider whitelisting our site in your settings, or pausing your adblocker while stopping by.