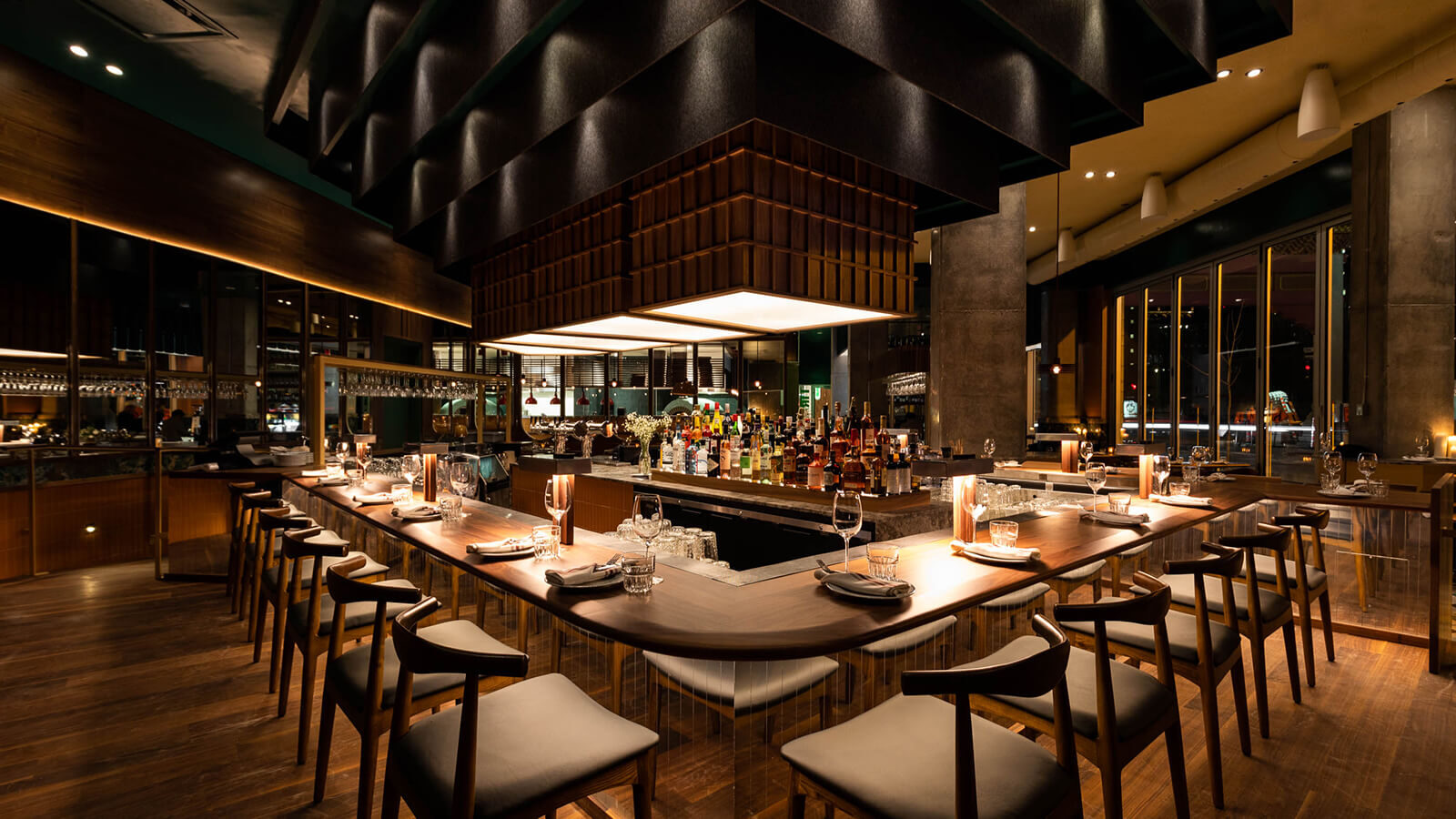 Chinatown might be the last place you’d expect to find Montreal’s newest Italian eatery. But step inside Tiramisu, a recently opened restaurant on the ground floor of the Hilton Hotel, and you might be surprised at how well the union works. It all starts with the menu — an assortment of classic Italian dishes, each with a hint of Japanese flair (think white soy panacotta or sushi rice arancini). The marriage of these contrasting cuisines serves as a natural departure point for the restaurant’s interior, designed by local firm Ménard Dworkind.

The pair are no strangers to Montreal’s hospitality scene — they’ve produced a number of the city’s design hits in recent years, from Vinvinvin wine bar to Vesta pizzeria and Ryú sushi bar. With Tiramisu, the prolific duo add another iconic Montreal hotspot to their portfolio. 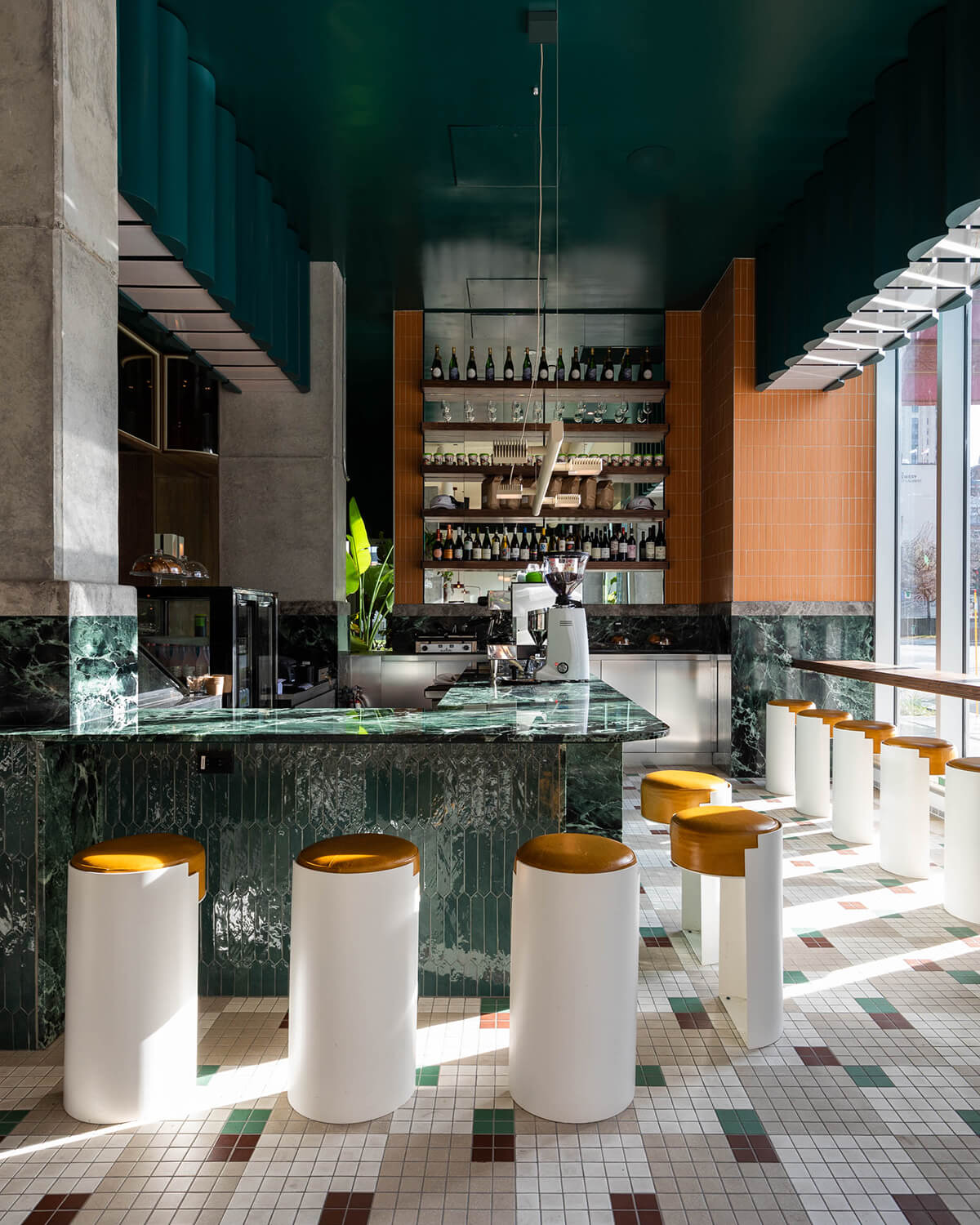 “Our design follows the balance of the menu,” the designers explain, “mostly Italian with a twist of Japanese.” Case in point: an eclectic material palette draws on the inherent contrasts between the two cultures. Towards the entrance, an opulent green marble bar is balanced by slick white counter stools, while in the main dining space, mosaic floors, wooden furniture and arched motifs evoke a distinctly European sensibility — drawing from Italian interiors of the 1960s. 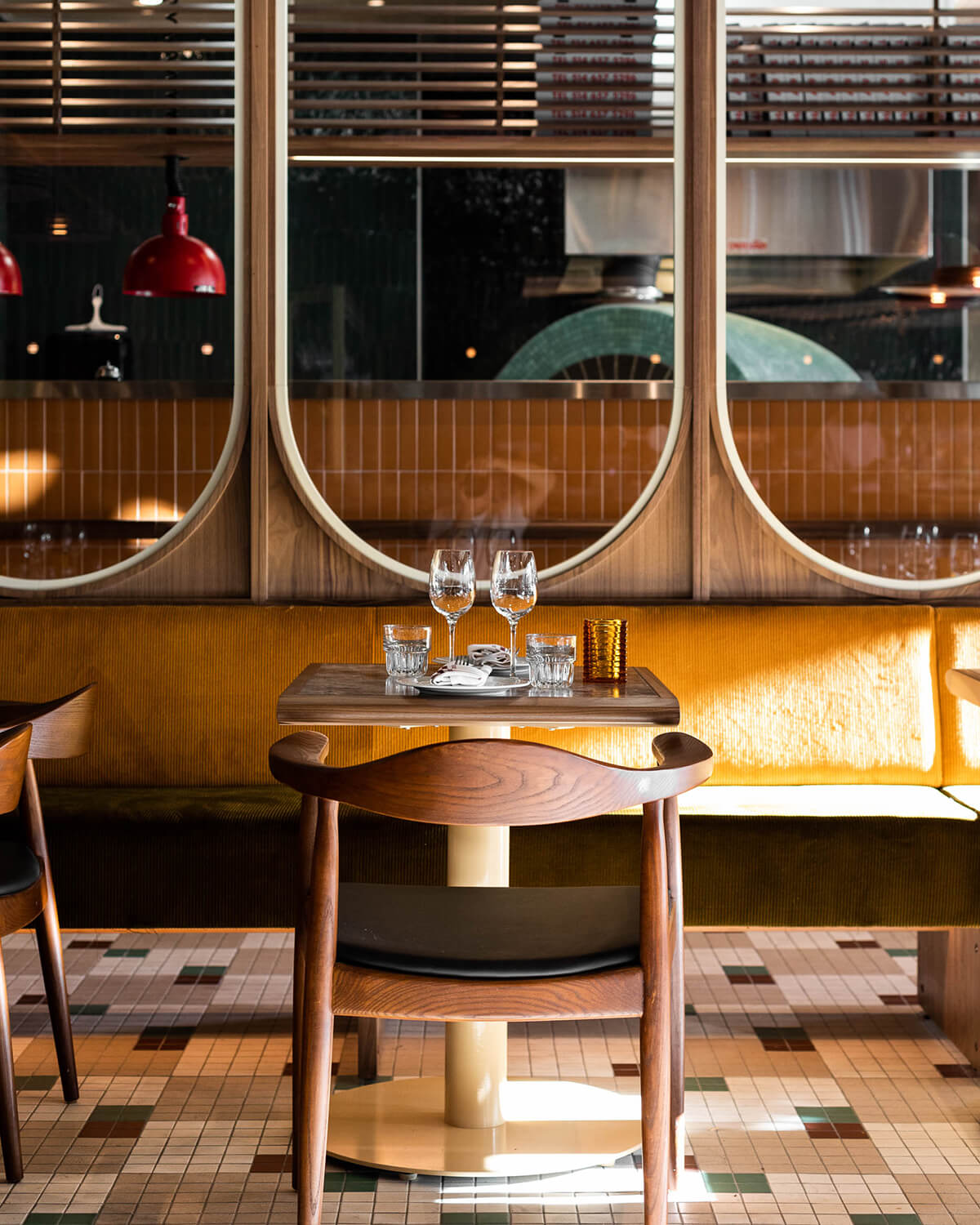 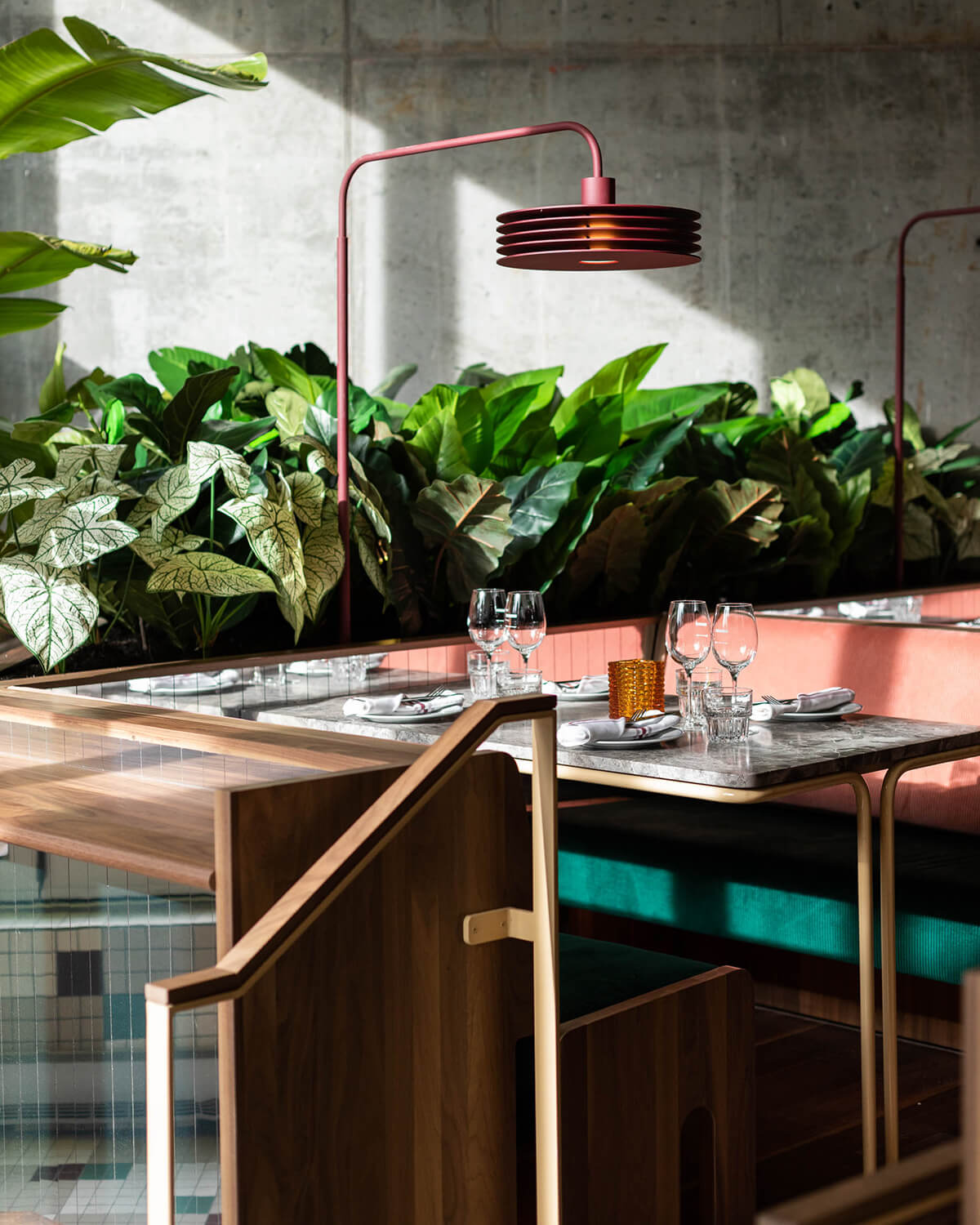 Past the hotel lobby, a narrow entryway leads into the 1,190-square-metre dining space, flooded with natural light. Further inside, a reflective mirrored bar and chrome finishes amplify the effect, casting a warm glow throughout the restaurant. The room’s 23-metre-long glazed facade is also fully operable, allowing the restaurant to open up in clement weather, merging with the busy streets of Montreal. 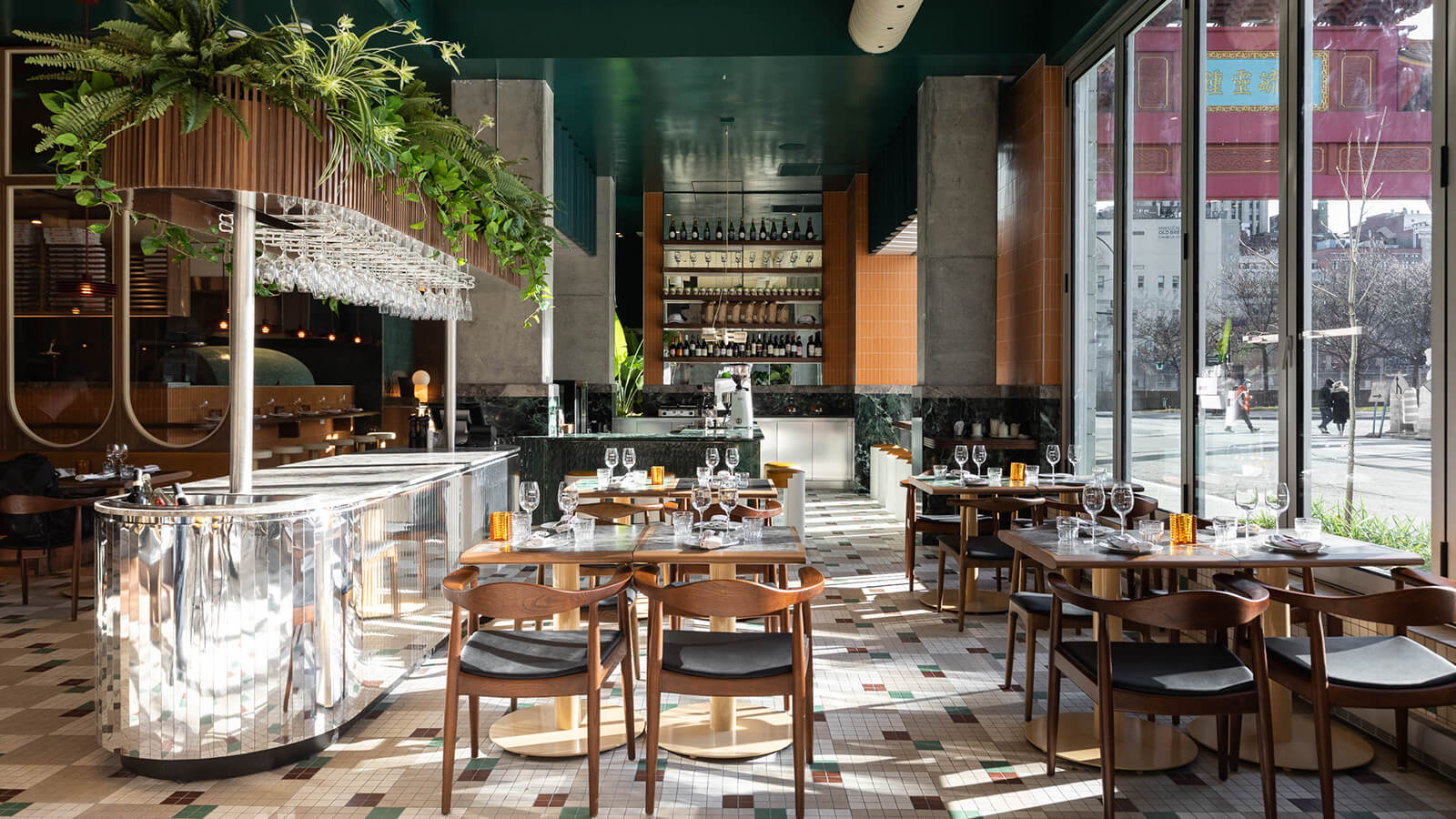 Towards the centre of the room, a striking asymmetrical bar punctuates the space. Here, Japanese design influences take a more obvious hold, with an inverted pyramid that hangs from the ceiling, wrapped in acoustic felt. Below, a series of black walnut light boxes illuminate the bar, inspired by “the densely gridded window frames of Japanese tea houses.” 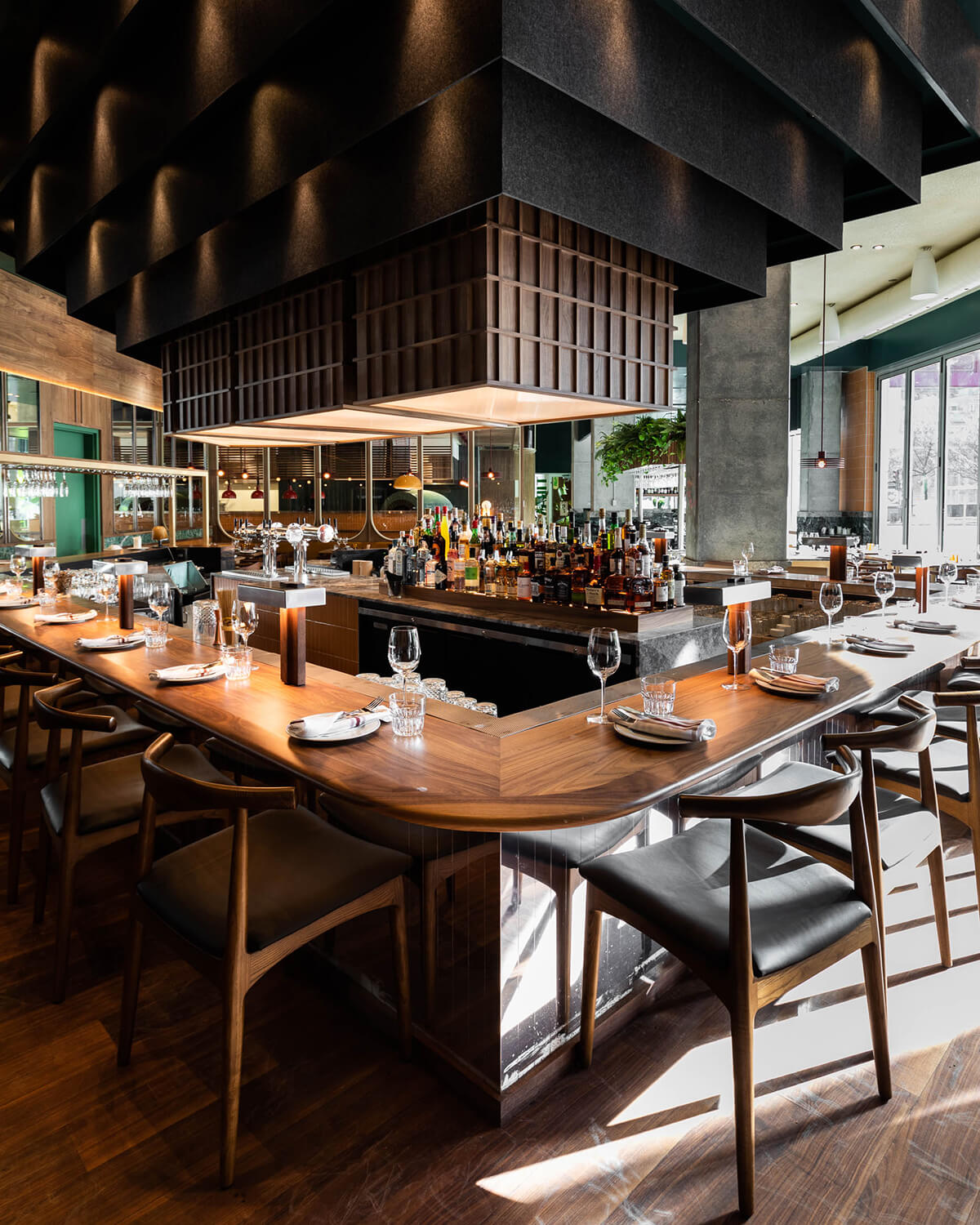 To add to the ambiance, Ménard Dworkind leaned on local lighting design studio Lambert & Fils, a frequent collaborator on many of their hospitality projects. For Tiramisu, the brand created a set of bespoke pendants, each made from five powder-coated stacked disks in deep red. Accenting the interior, the fixtures “create an interesting play of light and shadow throughout the restaurant.” Table lamps made from chromed aluminum and black walnut set the tone at the showpiece bar. 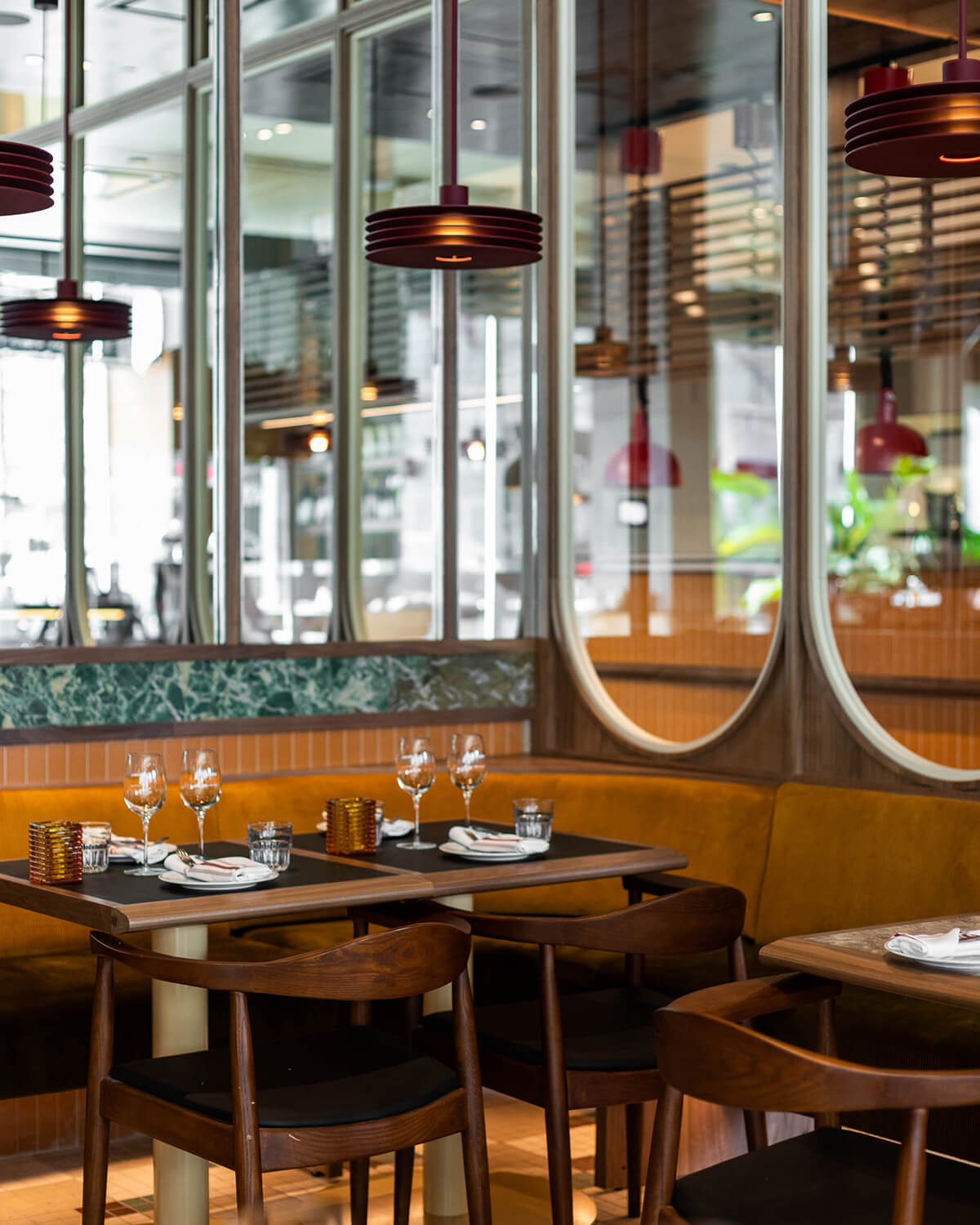 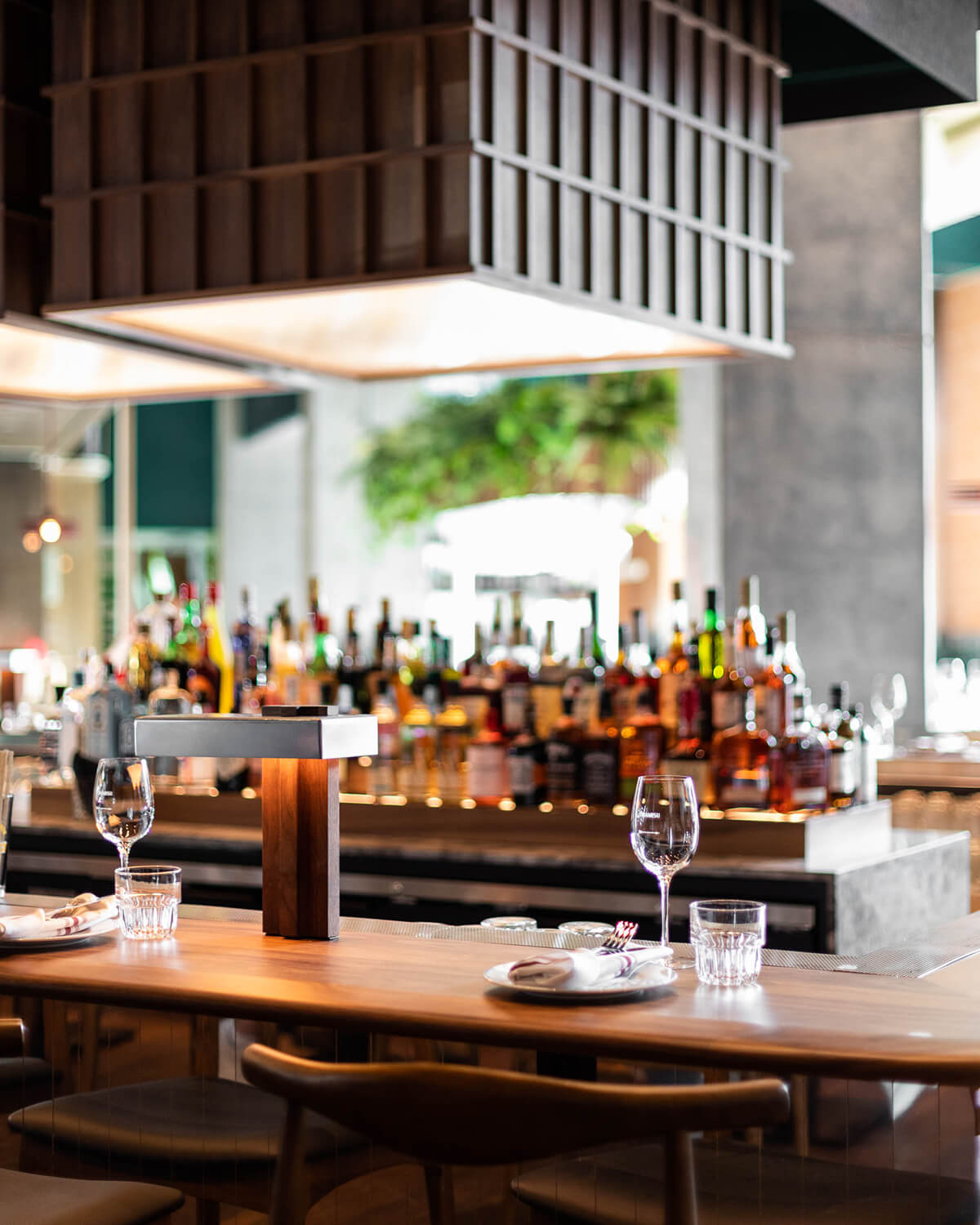 Designing a restaurant amid the pandemic was not without its challenges, however. Influenced by the onslaught of dining restrictions that emerged during the lockdown, the designers wanted to create a space that could easily adapt if indoor dining became restricted once again. 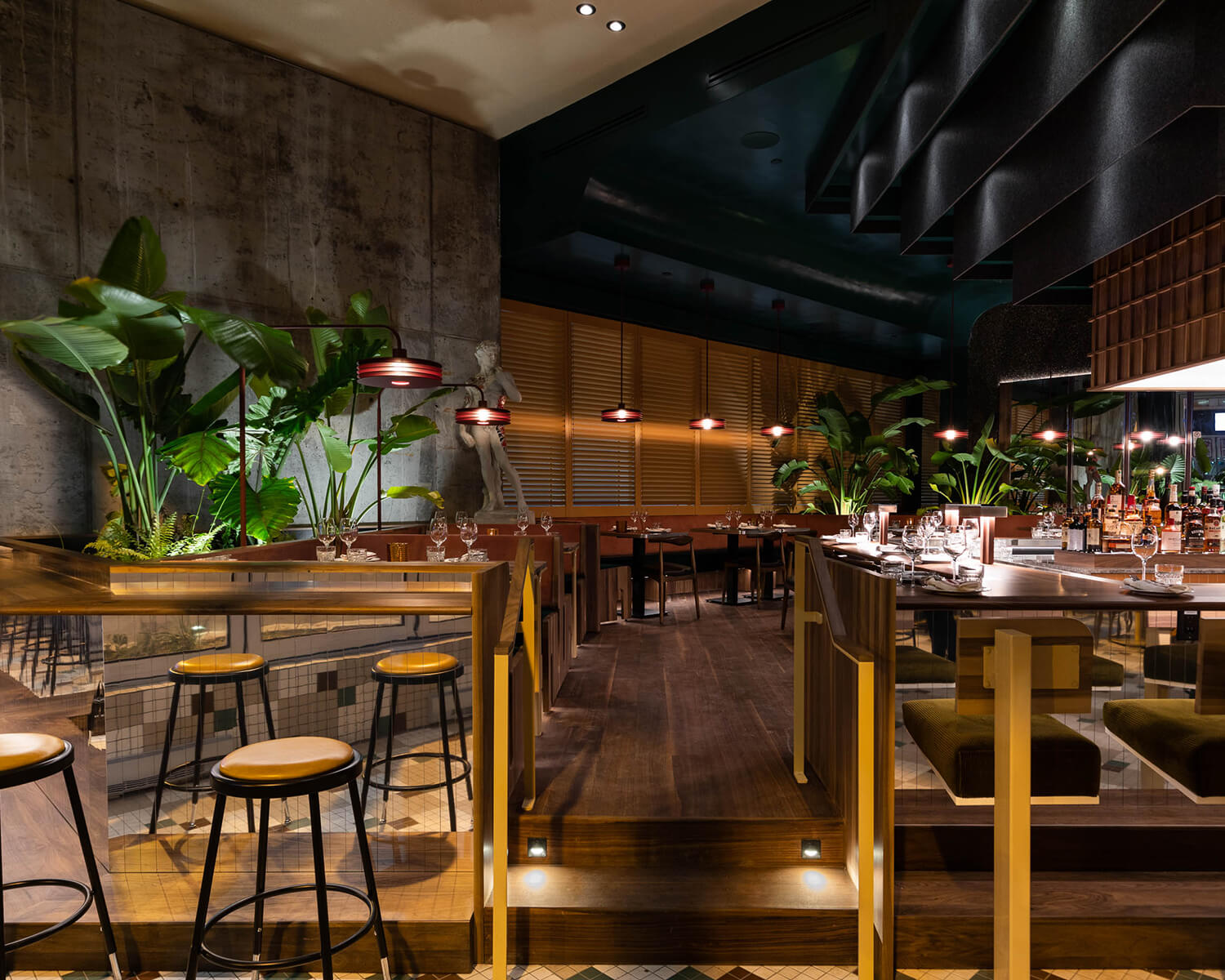 The solution: a quick-service café called MISU and a pizza counter located at the restaurant entrance. According to the designers, this move enables diners to pick up take-out without walking through a “large empty (depressing) dining room,” an experience that became all too familiar during the height of the pandemic. With the addition of a take-out window, the space can now be experienced in all its intended glory. 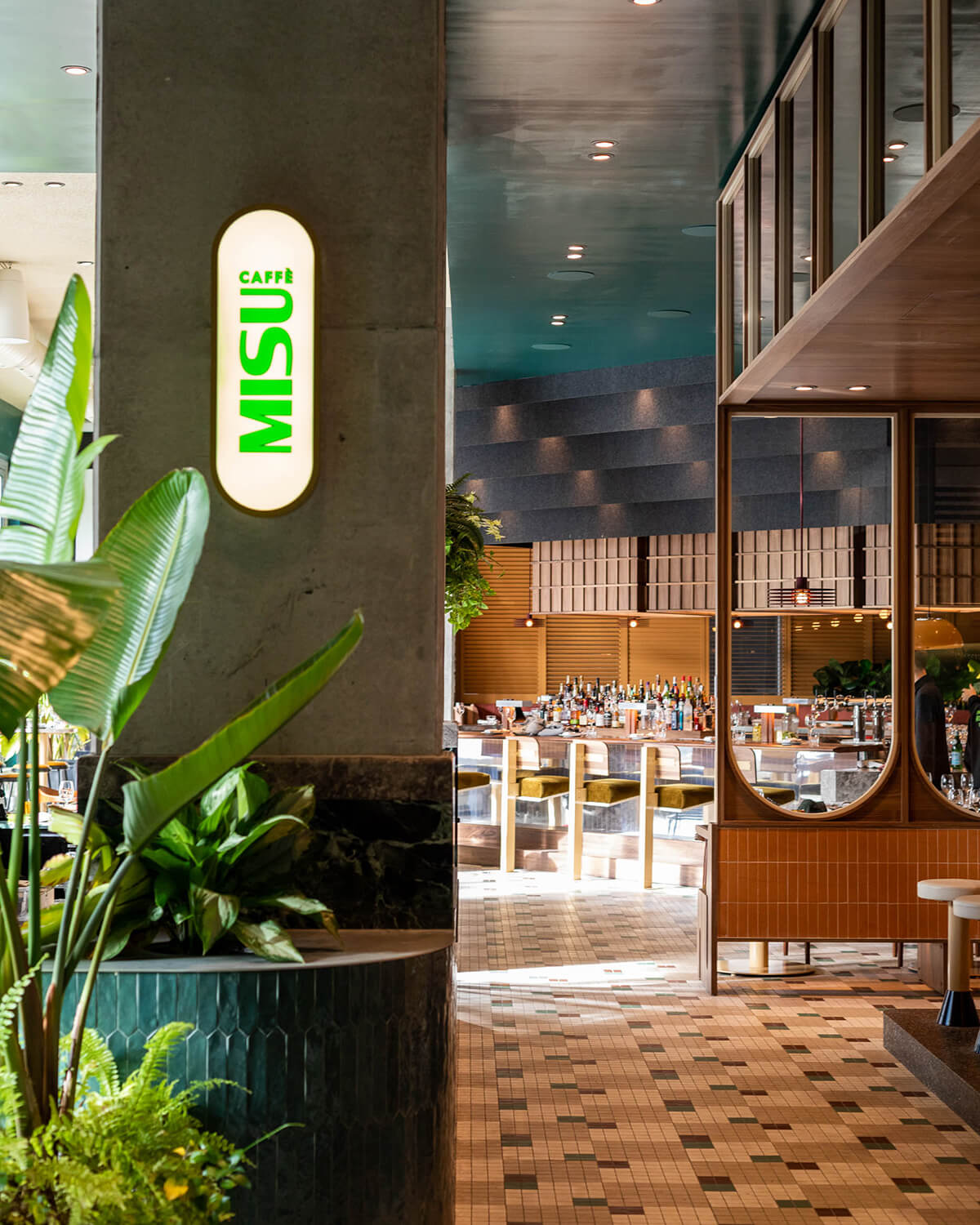 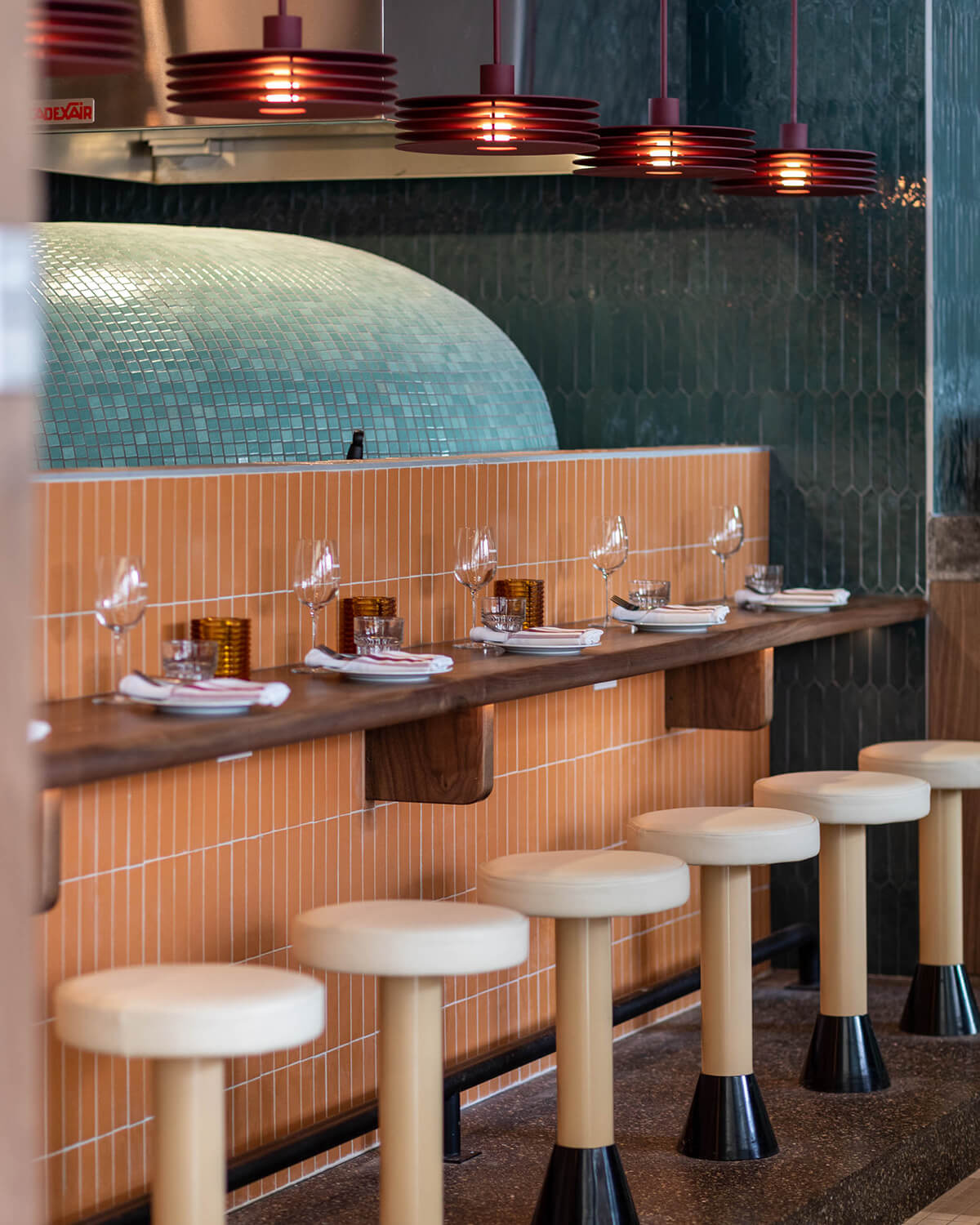