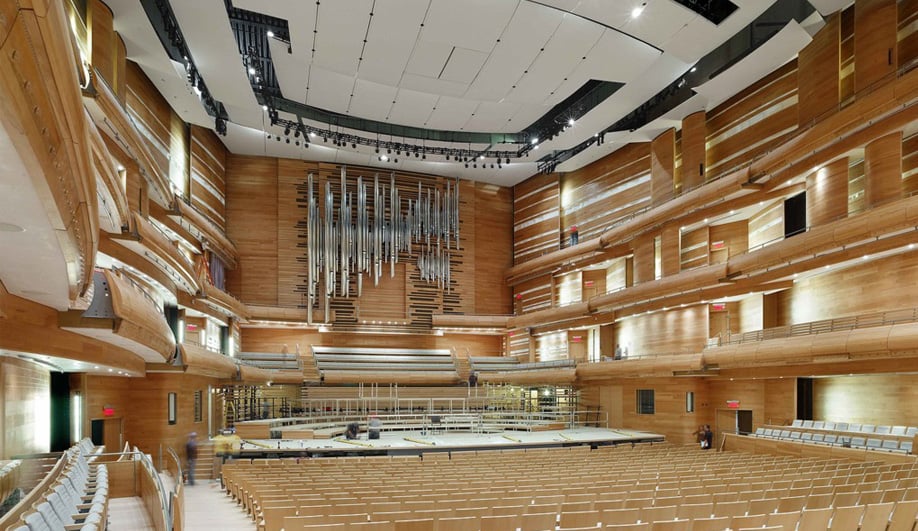 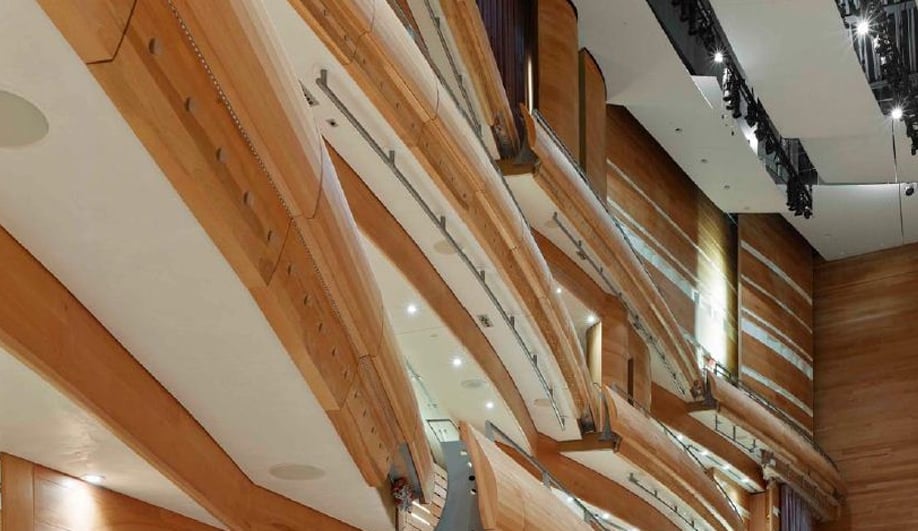 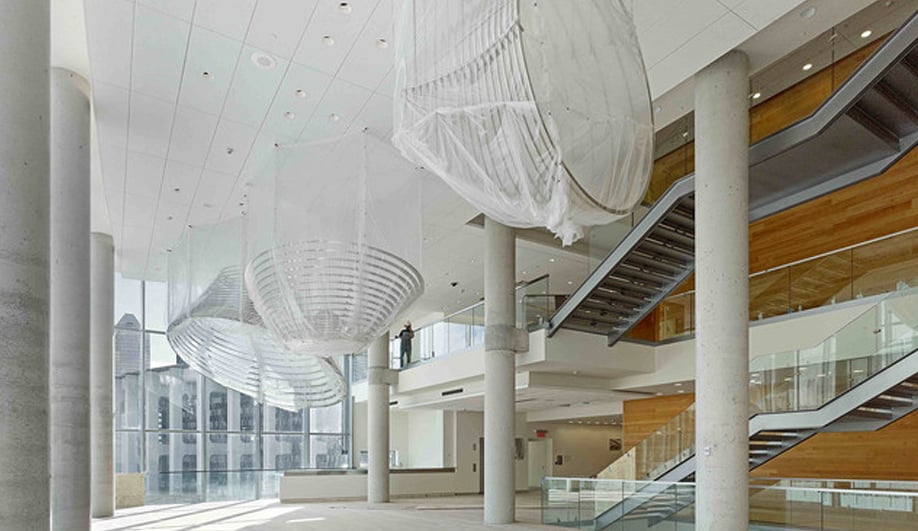 Lighting elements are added to the reception area 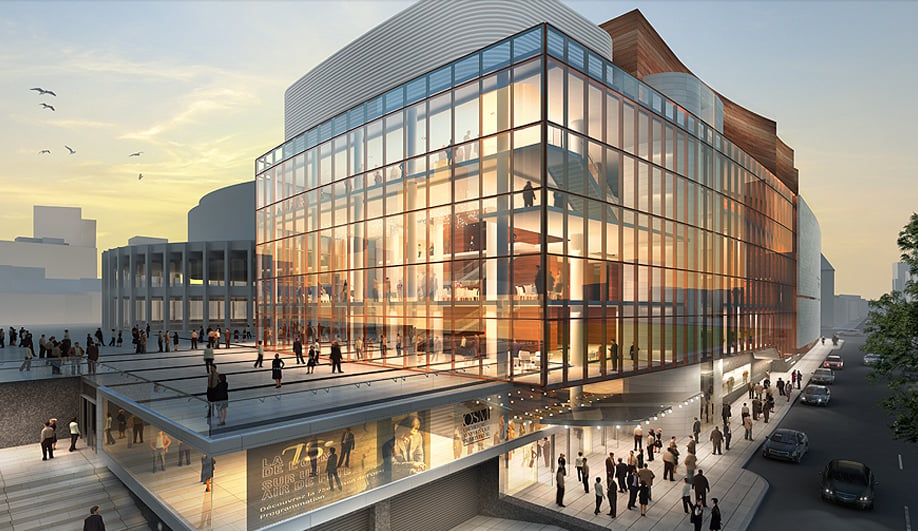 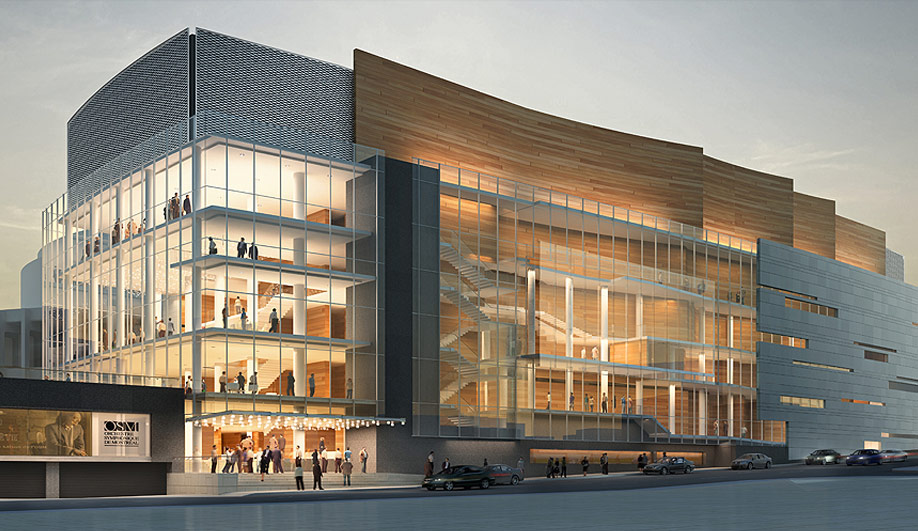 The Montreal Symphony Orchestra recently inaugurated a brand new performing arts centre, the Maison Symphonique, that will now hold down the Place-des-Arts cultural hub in the city’s east downtown. The centre’s shoebox-style auditorium looks simple, but it’s actually a feat of sound engineering: its stage is not only at grade, sitting even with ground level – it’s also just metres from a subway line, underground parking lot and busy roadway.

Keeping the stage at grade while eliminating intrusive noise was the guiding concern for the building plans. The team, fronted by lead architect Jack Diamond and project architect Matthew Lella, worked closely with architects at SNC-Lavalin and Ædifica, and with Sound Space Designs and Artec (specialists in acoustic design), to keep the ambient noise within the space below the threshold of human hearing – a tall order for a structure with so many noisy neighbours.

Most of the techniques they used to keep out unwanted sounds are hidden in the walls and duct systems, with the entire auditorium constructed as a “box within a box” that rests on 180 rubber isolator pads, to absorb shock and reduce vibration. In the auditorium, each seat is individually air-conditioned, a step taken to eliminate the noise from centralized ventilation and maximize comfort. Even the exterior glazing is set deeper and heavier in an effort to cut back on intrusive noise.

Overlapping convex panels of locally sourced beech and plaster were bonded directly to the masonry and accented with hand-sized gypsum tiles – a variance in the scale of interior finishes engineered to span the audible spectrum, further deepening the richness of the sounds within.

To fine-tune the acoustics even more, the ceiling features nine individually motorized acoustic baffles, panels that can be raised and lowered to adjust the timbre of the sound: low for a smaller-space sound befitting smaller groups performing jazz or chamber music, and high to create the sound of a larger hall for symphonic works. Raising the ceiling also admits the use of a lighting grid for effects during pop concerts.

The stage can accommodate 120 musicians or 220 choristers, and from the front of this stage to the upper balcony, an expanse of only 39 meters, can accommodate 1900 audience members on the ground floor and three tiers of balconies. A monochrome palette inside the auditorium creates visual unity, and a striking sculptural organ was designed by Diamond with Casavant Frères, a Quebec-based company that has been making pipe organs since 1879.

All this is contained in a comely exterior of beech and grey limestone on a black granite foundation. Glass reception decks frame the exterior walls, extending the full five-storey height of the building. At the conclusion of the first public performance recently, the orchestra’s rendition of Ode To Joy brought down the house, attesting to the fact that Montreal’s music lovers have something to be joyous about.