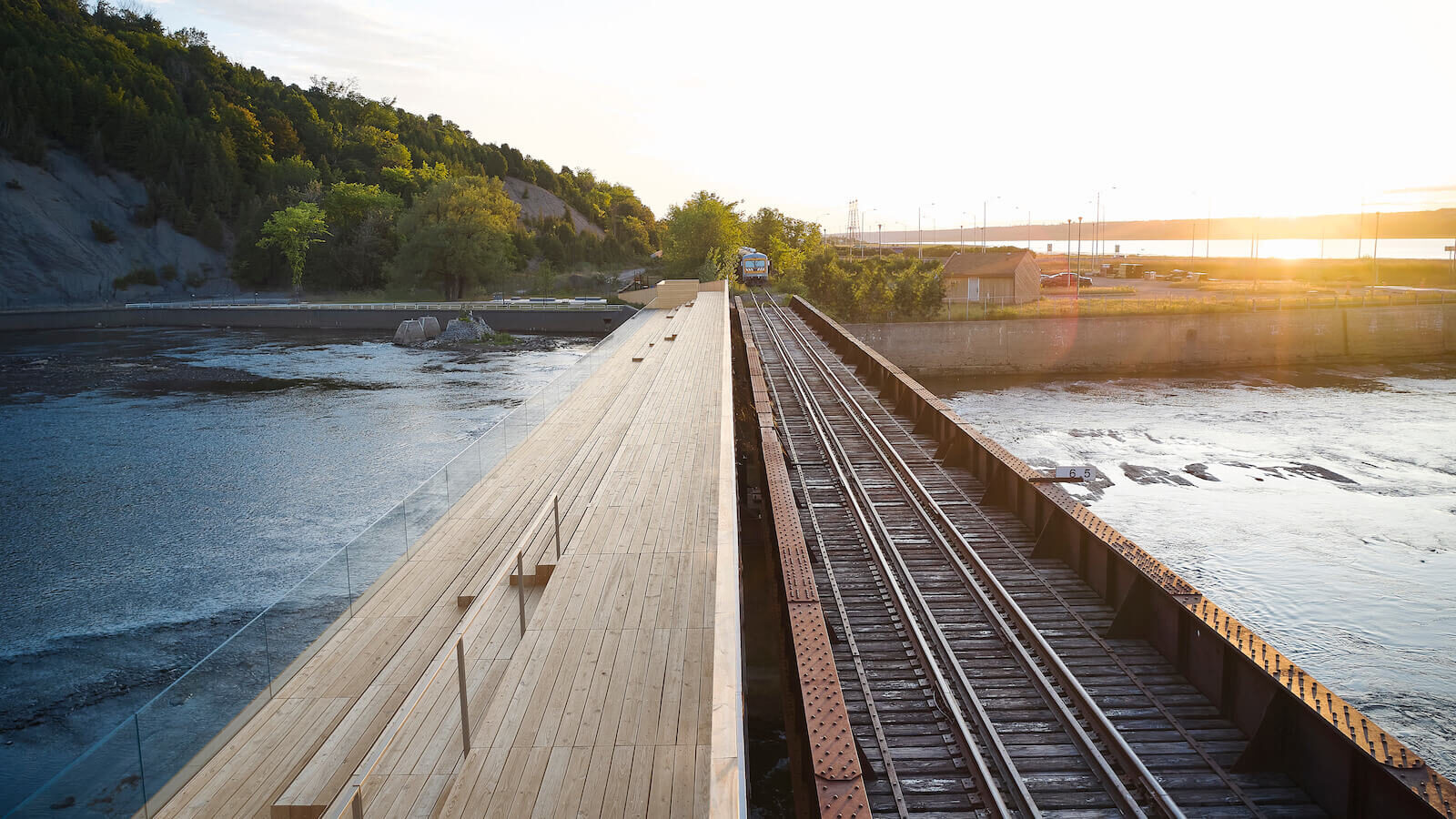 A Quebec City Footbridge Connects to the Past and Future

The renovated footbridge below Quebec City’s Montmorency Falls now does more than span the river. Once a skinny walkway mounted on the railway bridge and hemmed by a mix of guardrails and fences, it is now a generous, timber-lined walkway, named the Contemplative Footbridge, replete with terraced seating facing the waterfall. It offers a moment to relax and appreciate the view among the rumble of passing trains and the distant thunder of crashing water. 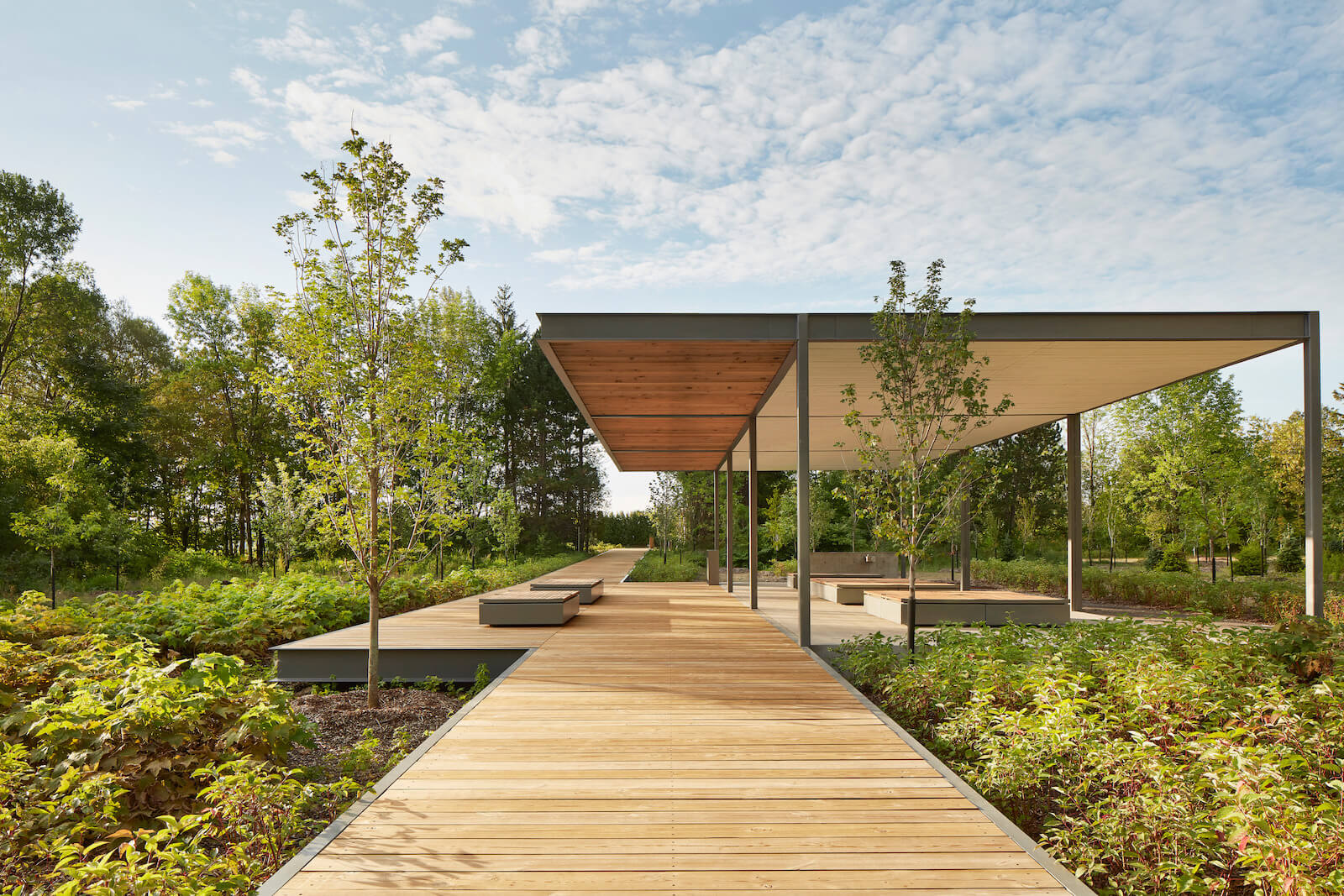 Funded by Sépaq, Quebec’s agency governing parks and wildlife reservations, the Experience Chute hopes to reimagine the base of Montmorency Falls with a full and accessible circuit around the river basin, revitalizing existing infrastructure and adding new components along the way. Over 800,000 people visit the Quebec City park each year to view the 83-metre cascade of the Montmorency River as it approaches the St. Lawrence. But although the top of the escarpment boasts among its amenities a suspension bridge, the Manoir Montmorency (a 1994 replica of a historic manor house) and ziplining, the base of the escarpment has mainly offered trails. 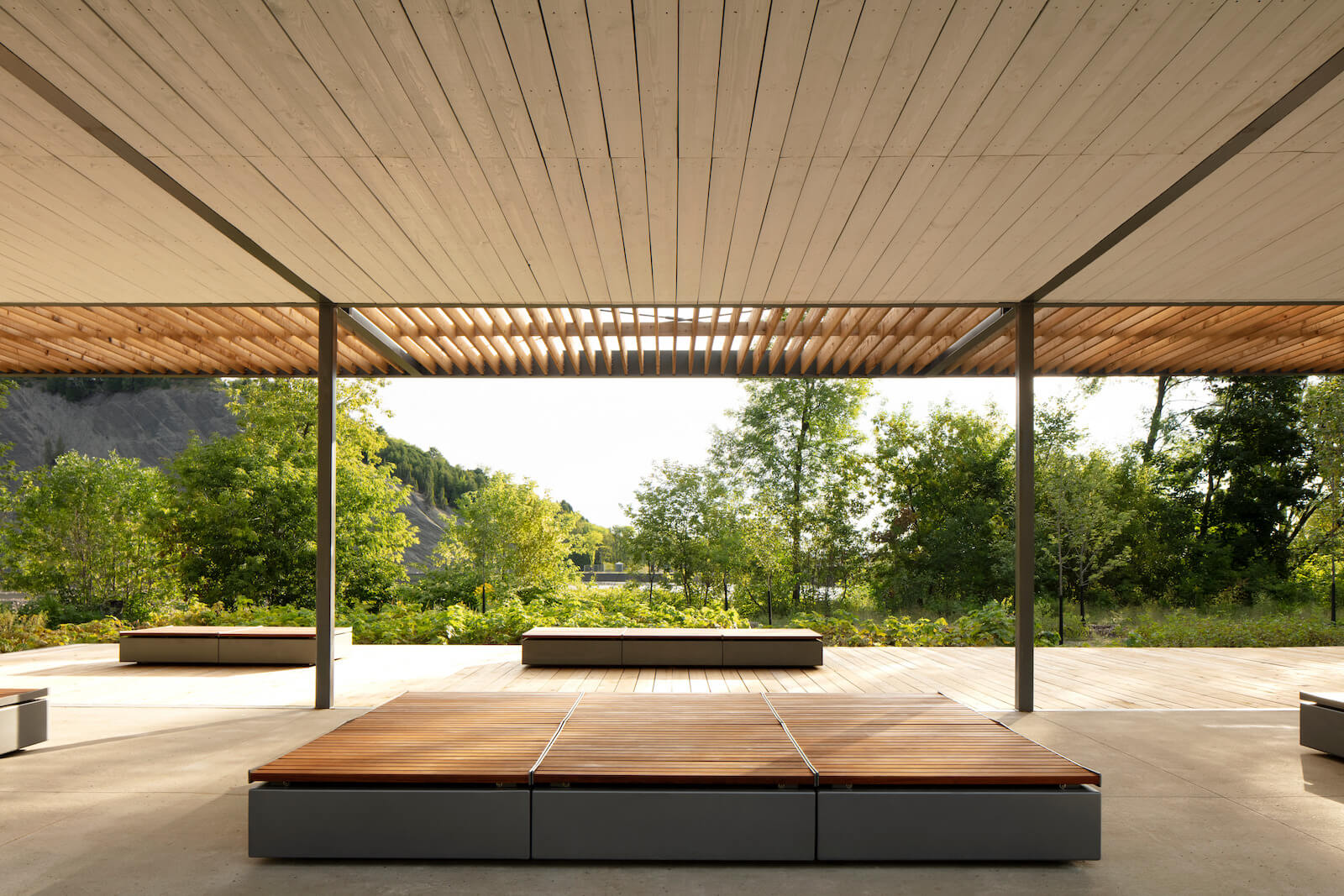 “From the beginning of the project, our goal was to keep the waterfall the main attraction and to magnify the scenery,” Daoust Lestage Lizotte Stecker explains. And the resulting masterplan supports that; it consists predominantly of new and renovated trails interspersed with small, careful interventions.

The elegant and open Welcome Pavilion provides an anchor and focal point near the entry to the lower Parc de la Chute-Montmorency. Designed with minimal impact to the landscape, it took advantage of an already-cleared site that once was home to an electrical substation. The pavilion leads to the Nature Path, a new boardwalk elevated to further minimize its footprint on the basin’s rustic western shore, which Daoust Lestage Lizotte Stecker has planted with native species to promote further renaturalization. 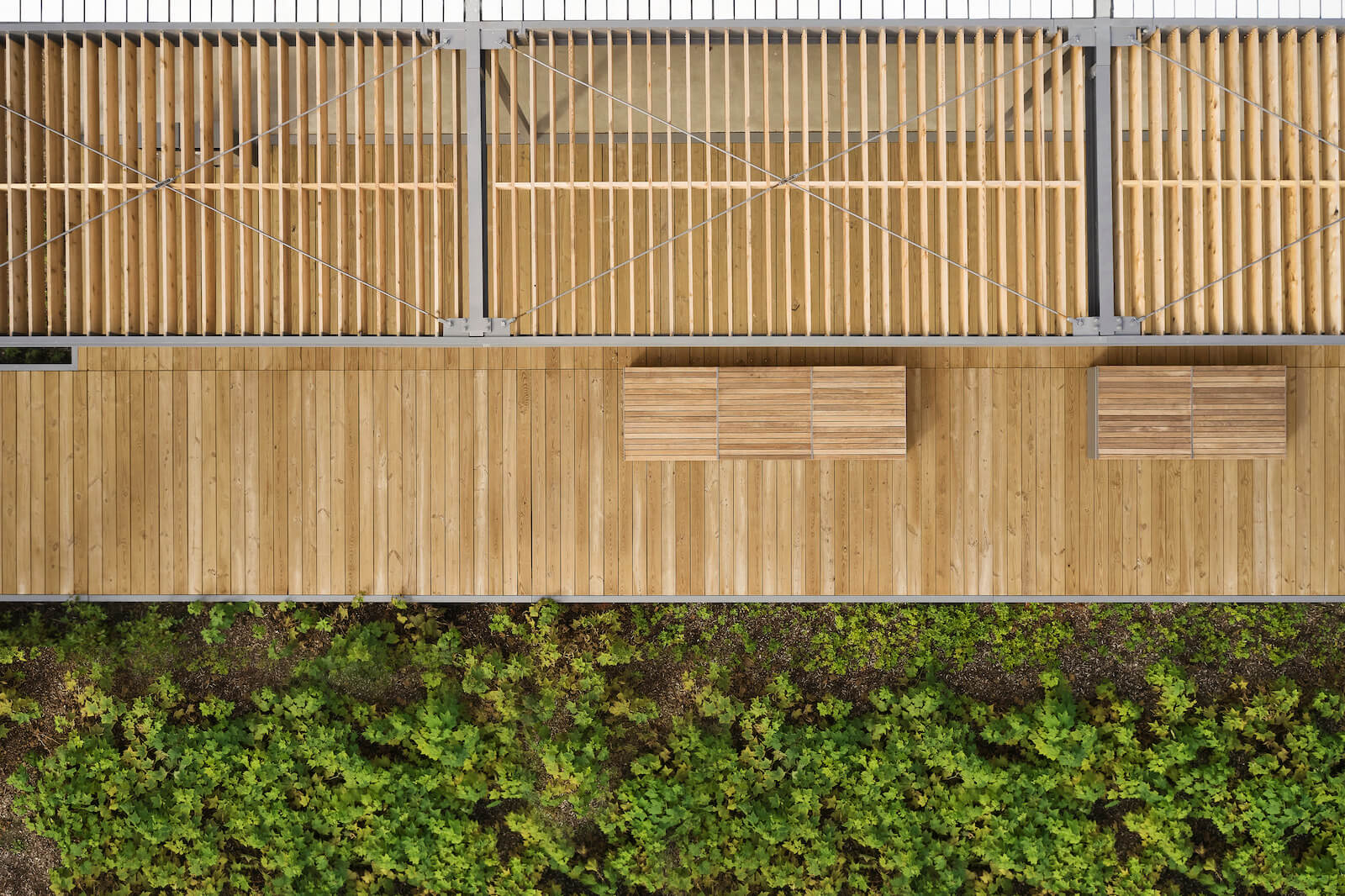 As the most recent manifestation of the overhaul, the Contemplative Footbridge links the Welcome Pavilion with the eastern shore’s picnic area and planned Mineral Path, the renovation of an existing concrete walkway and belvedere. At the north end of the loop, the ambitious, semi-submerged passerelle is planned to cross the river again, though this time just under the surface of the Montmorency River, allowing visitors to “approach the waterfall and feel its hydraulic power,” according to the firm. “The passerelle floats and adapts to the water level of the basin. It is a great technical feat; a real innovation.” 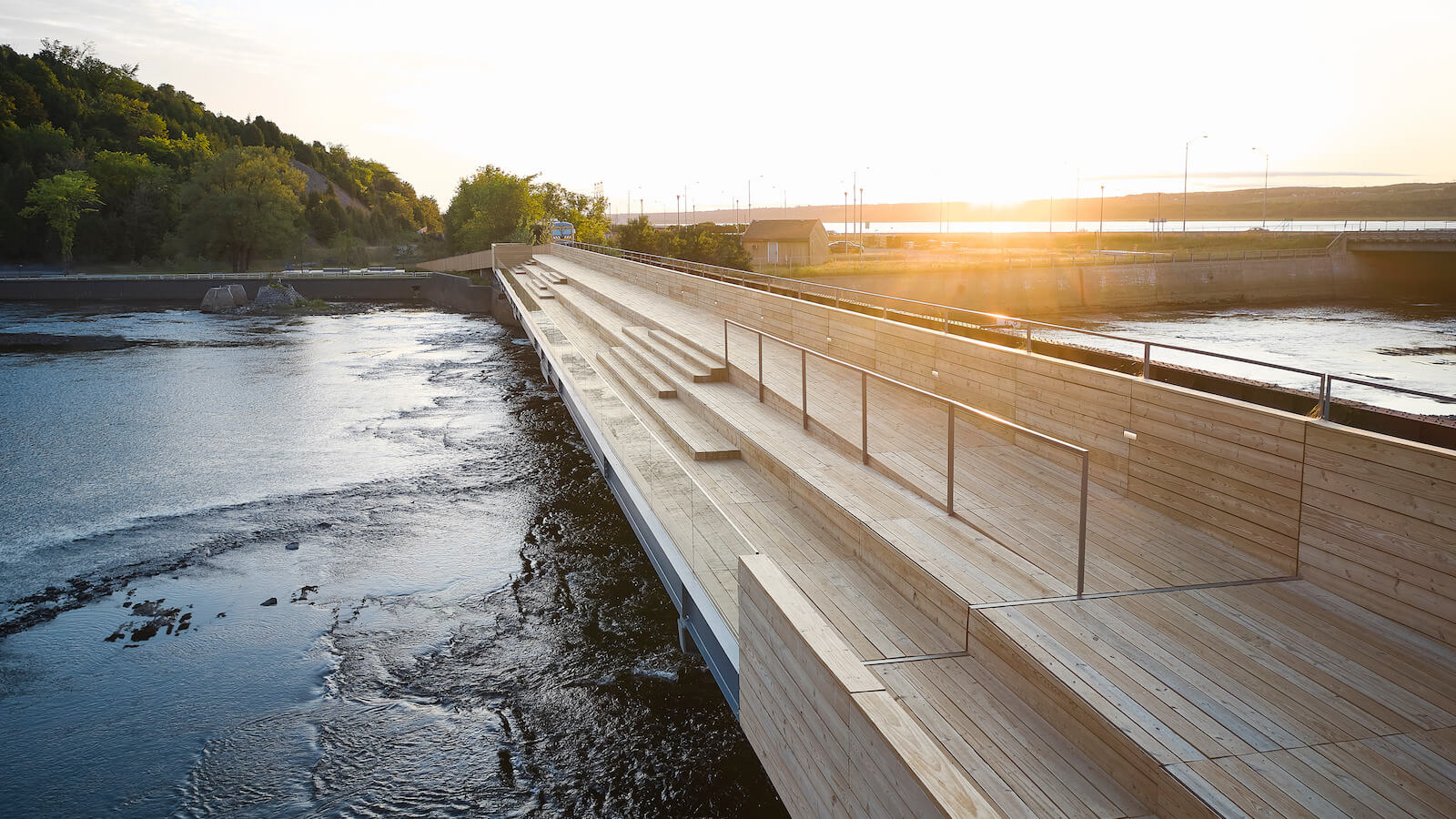 The fine-grain changes, both built and planned, represent a potential shift in the identity of the park, but Daoust Lestage Lizotte Stecker view their work as another step in the historic evolution of the site. “The foot of the falls is representative of the layers of urbanization specific to the banks of Quebec City,” the firm explains.  “From a natural site where the St. Lawrence River came to touch the foot of the cliff, it was gradually modified by human interventions to develop its military, energy, and industrial potential.”

That the firm recognizes how the existing fabric occupies the public’s collective imagination enables it to slot its designs comfortably into place as familiar extensions of the site’s history. The footbridge and boardwalks’ timber cladding recalls the stacked lumber, log drive and sawmills which characterized the area in the 19th century. Even the placement of the Welcome Pavilion provides a moment of reference, as it coincides with a viewpoint used by 19th-century painter Cornelius Krieghoff. 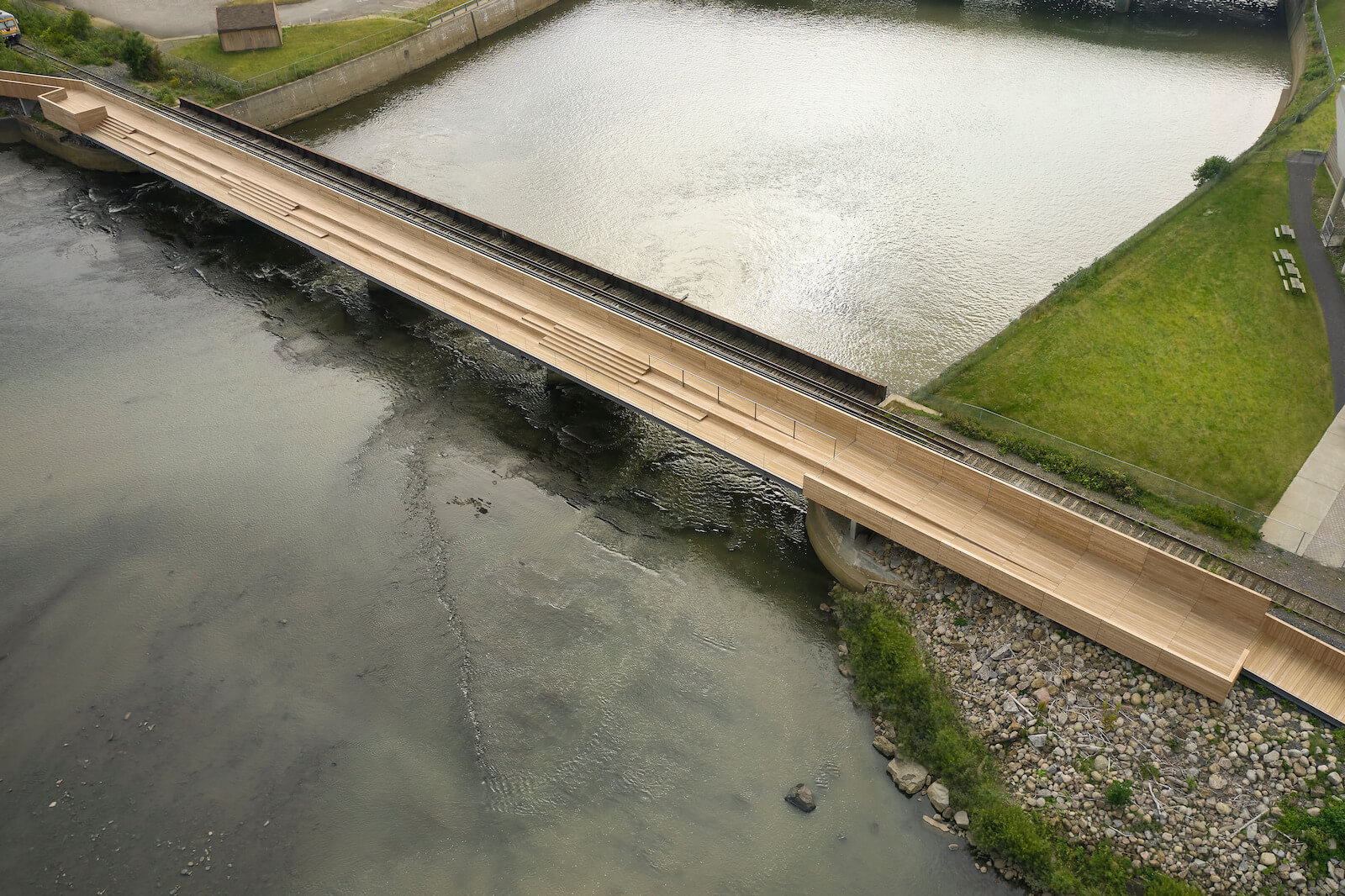 While the tight wood joints, minimalist rooflines, and barely-there glass handrails might be unexpected in a public park, they are deployed to serve a similar purpose. “Since the project had to be discreet, humble and well-controlled,” the firm explains, “the detailing eliminates all unnecessary elements that could affect the landscape and interfere with visitors’ attention, resulting in a resolutely contemporary project.” 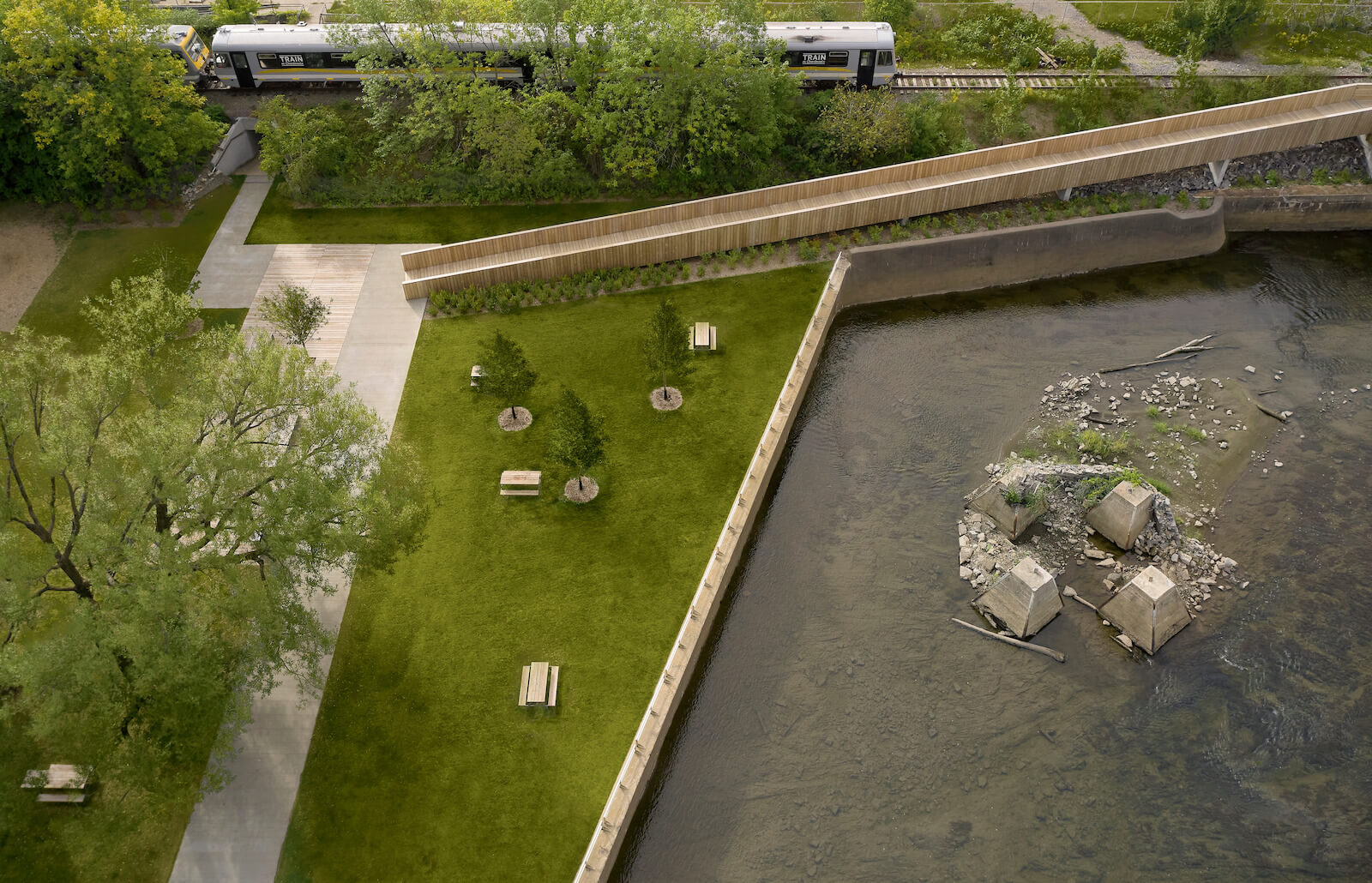 There is still work to be done. The remaining elements of Experience Chute – the Mineral Path and semi-submerged passerelle – are slated for completion in 2022 despite recent news of rising construction fees. It appears those additional costs will be managed through cuts to a planned visitors’ reception area, intended to include several new gardens and a renewed parking lot.

Regardless of what will result from the continued renovations, the completed Experience Chute works have already had an impact. For a site with many overlapping histories of use and modification, this newest stage, borne of exciting and careful design, is a deserved reinterpretation.