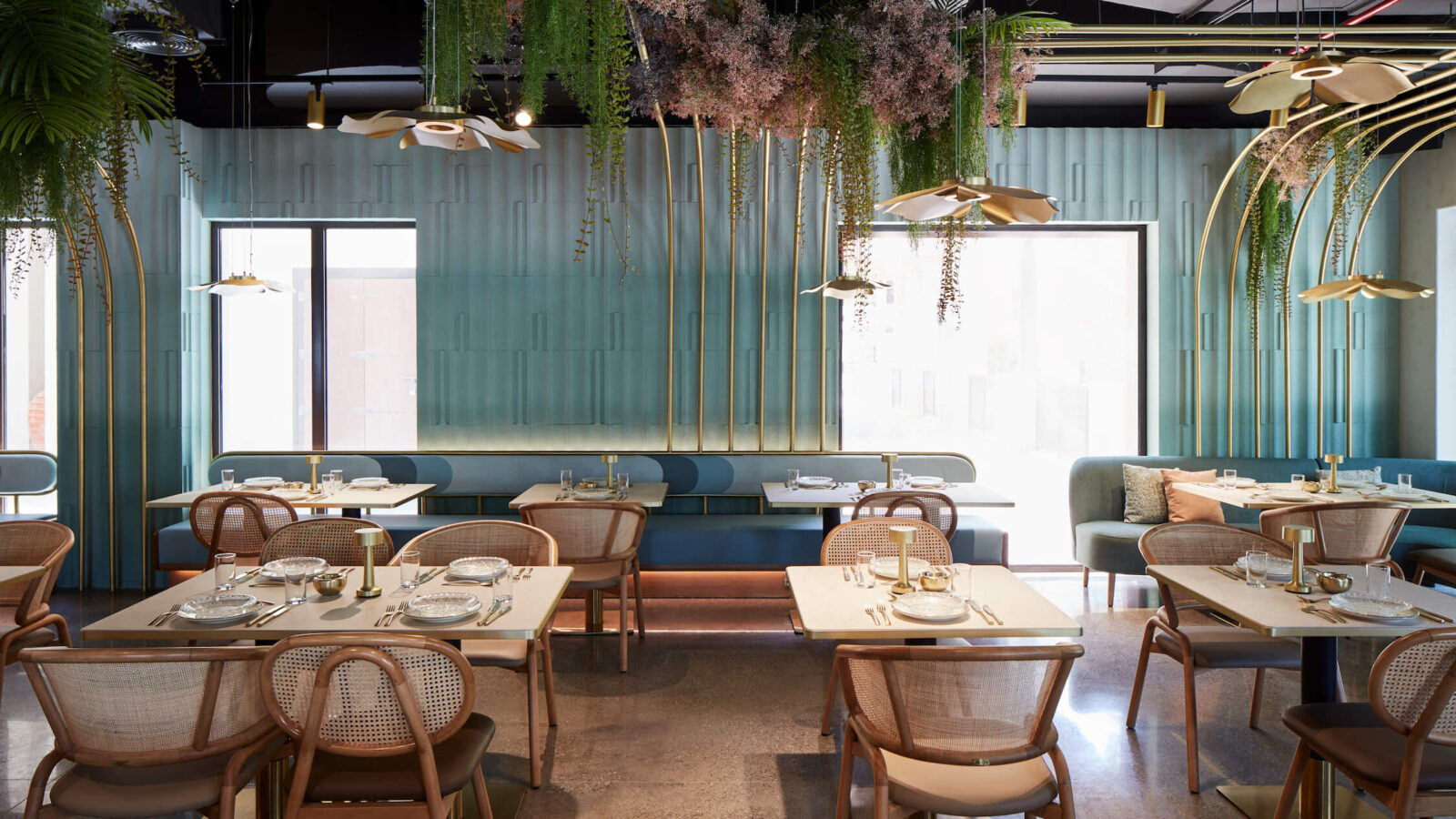 Since it first opened its doors nearly 20 years ago, Mezza House in Dubai has become one of the desert city’s most popular gathering spots, its Levantine dishes attracting foodies to its dining room and outdoor terrace from across the U.A.E. But after two decades, the landmark establishment, which specializes in the cuisines of Syria, Lebanon, Palestine and Jordan, needed a refresh. Enter Indian-born, Dubai-based Pallavi Dean of the interior design firm Roar, which swapped a dated colour scheme and decidedly early-aughts aesthetic for sleeker finishes, biophilic gestures and a palette more reflective of the eatery’s culinary touchstones.

“During concept development, we kept coming back to the Yarmouk River Valley,” Dean recalls, referring to the lush mountainous area straddling Syria and Jordan. “It is a designer’s dream: The landscape offers an incredible array of textures and colours as inspiration. Our client wanted to redefine what a contemporary Levantine restaurant should look and feel like in Dubai today, so we thought the Yarmouk River Valley, with its vast diversity, [provides] the perfect connotations.”

In particular, a softer tonal palette composed of rose and green hues was adopted by the design team, the pinks evoking “the Anatolian Orchid that thrives by the Yarmouk River” and the green shades suggesting “the leaves of the emblematic Atlantic Pistachio Tree that is found in the Valley.”

“Ombre or colour gradation is present throughout, once again a theme we have borrowed from nature,” Dean explains further. “If you stand at the bottom of the Yarmouk River Valley and look around your feet, you can see the vibrant colours of the grass, the plants and the shrubs. As you raise your eyes to the skies, the palette changes to the more neutral grey and beige rocks at the top of the mountains. The textures also shift from soft, smooth and round to rough, jagged and angular. We deliberately incorporated these contrasts all around Mezza House, from the back of the seats to the art on the wall.”

Sporting fabric by Kvadrat, the custom-made seating ranges from colourful upholstered banquettes to a variety of rattan chairs, while some of the wall art and pendant lighting draws on floral motifs, including those Anatolian orchids.

Connecting it all is a “labyrinthine network of golden pipes that runs across the restaurant, visually structuring the different areas and mapping out the guests’ journey.”

In addition to having an anchoring effect, the piping also provides a framework for actual greenery: lush eruptions of feathery fronds and trailing tendrils that cascade from the walls and ceilings.

Overall, the redesign is transporting, creating a space that’s both chic and contemporary yet rooted in nature — not to mention a fitting setting for hummus and grilled halloumi. “I have been a fan of Mezza House since it opened in the early 2000s,” enthuses Dean. “We wanted our design narrative to tell the original story of this iconic restaurant and retain its legacy, yet reimagine it for the next decade.”