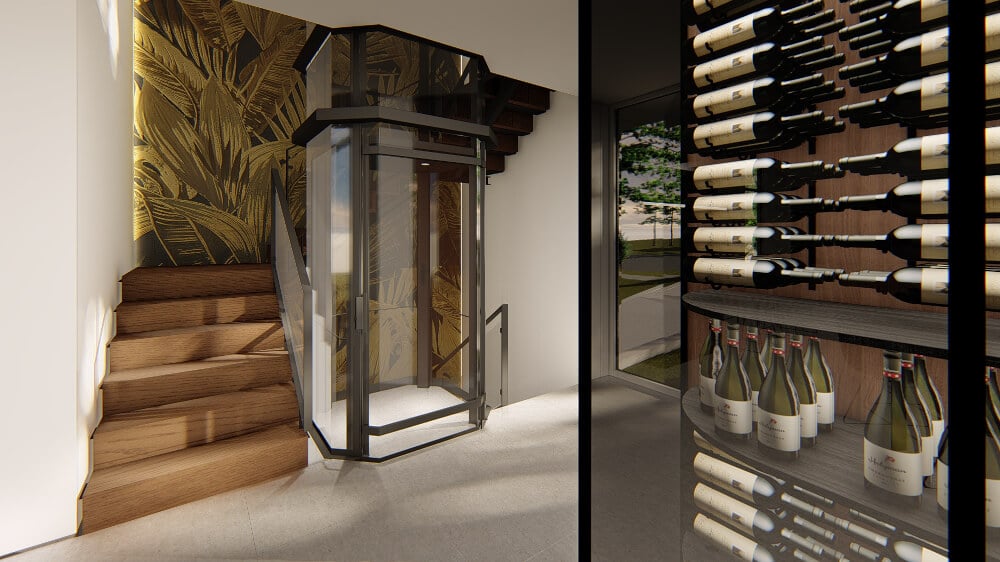 A Room With a Vuelift: Savaria’s Octagonal Elevator Completes a Montreal Home

“We’ve designed many homes that incorporate an elevator,” says architect Jean-Sébastien Herr, “but this is the first one where the elevator will be the centerpiece of the home’s design.” A co-founder of Montreal’s MU Architecture — which he established alongside Charles Côté – Herr’s embrace of Savaria‘s Vuelift technology reflects a wealth of experience and a penchant for innovation.

With a mix of North American projects and experience working in Vienna, Barcelona and Dubai, MU Architecture’s diverse portfolio regularly draws on technology to improve everyday life and the built environment. So it’s no surprise that Herr’s “contemporary interpretation of a modern mid-century house” currently under construction in Montreal should include an octagonally shaped, panoramic glass elevator running vertically right through the middle of the home.

“Our original plan was to have a traditional elevator in the home. Then the owner suggested the Savaria Vuelift glass elevator, and once we saw it, we knew we had to make it a focal point of the design,” says Herr. “We ended up centering the elevator in the main stair, and on the ground floor it lets out into the foyer of the main entrance. It’s striking.”

Unlike traditional elevators, where visual appeal is limited to finishes inside the cab – and the lift itself is typically hidden in a closed shaft – Savaria’s Vuelift makes the mechanism itself into an aesthetic showpiece. “With the Vuelift, you want to put it in a position where it will be seen,” says Herr. “It’s beautiful both inside and outside. Even the small part of the elevator mechanics that are visible with this unit just adds a touch of industrial chic.”

To provide a backdrop to the lift and visual interest to passengers, Herr and Côté designed a mural for the wall behind the staircase that unrolls upwards as the elevator travels from basement to top floor. “The mural really adds some texture to the architecture. Here is this glass lift with a steel frame, with the mural behind it, and the movement of the lift creates a sense of movement in the mural. They work very well together,” he says.

The glass elevator’s ability to both reflect and dissipate light also intrigued the designers. “The glass hoistway reflects natural light from windows into other spaces in the home,” Herr says. “It was really interesting to play with layers of glass between the elevator and the staircase around it, and how it affected the light, especially near East-facing windows. We can’t wait to see the final effect in real life.”

Vuelift Octagonal Glass Elevator
A sleek panoramic elevator with an integrated hoistway, Vuelift Octagonal Glass elevator is an all-in-one residential design. That means its placement on the floorplan is incredibly flexible, whether it is installed in the middle of the room, through the floor, attached to a mezzanine or centred in a switch-back staircase. Bringing the elevator out of […]
Read More

The only point of contention between architects and client on the project? “Charles and I originally wanted the Round model,” Herr laughs. “But once we got hold of the BIMs of the Vuelift Octagon and started modelling and got deeper into the design of the project, we realized the Octagon is a really architectural shape to work with in a residential project. We were sold from that point on.”

The Montreal home now under construction may have been the firm’s first project using a panoramic elevator, but it’s unlikely to be the last. “We have another project coming up in Mont Tremblant, in prime Quebec ski country. We’re already looking at the possibility of using the Vuelift Mini for that home, because of its small footprint of only 50 inches,” says Herr. “It’s exciting to try putting that round elevator inside a spiral staircase.”

This content was published by Azure on behalf of Savaria.