A Sculptural Toronto House Made For Living In
This minimalist yet warm home by Atelier Kastelic Buffey brings a touch of the contemporary to a picturesque neighbourhood in the shadow of Toronto's Casa Loma. 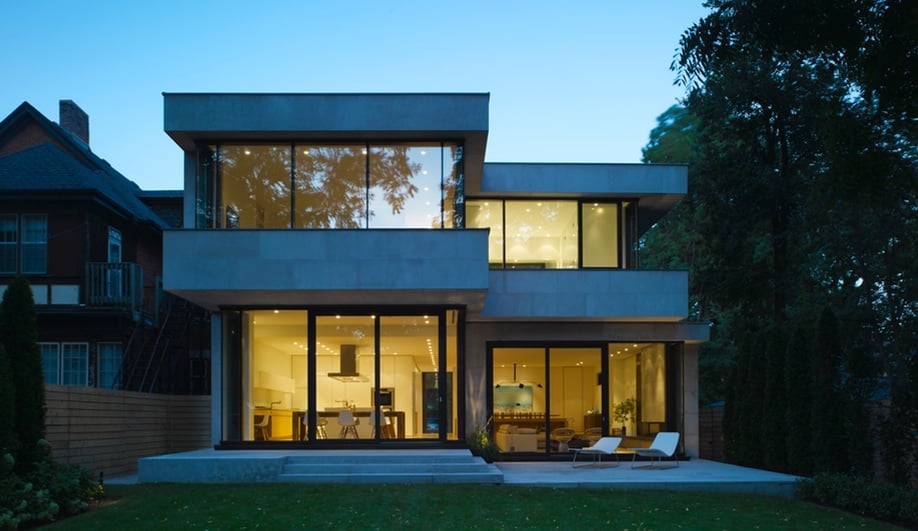 Large plate glass windows overlook a back yard with an inviting terrace. 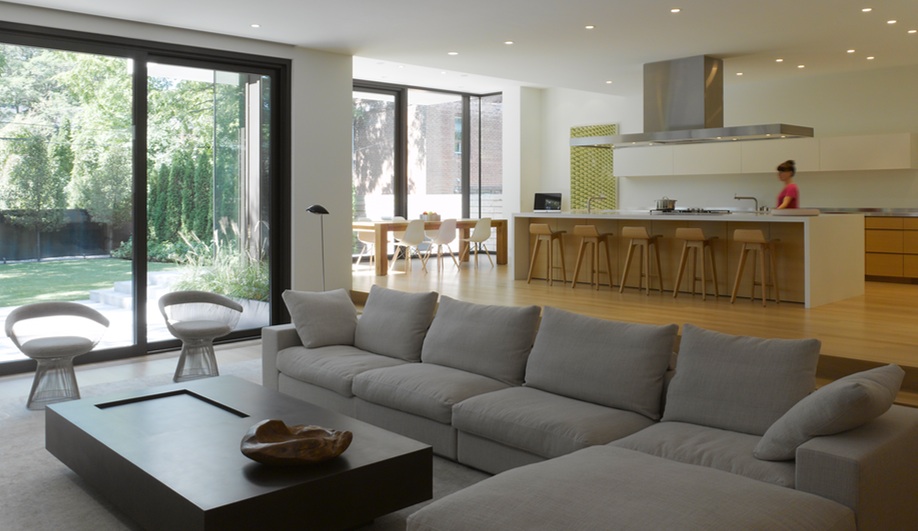 The living room, featuring Flexform’s Groundpiece sectional sofa, is sunken below the level of the adjacent kitchen and dining areas. 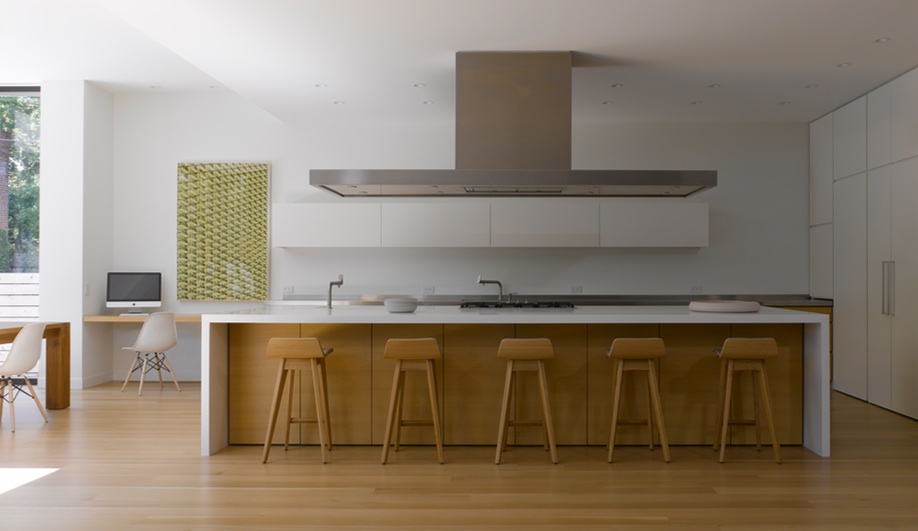 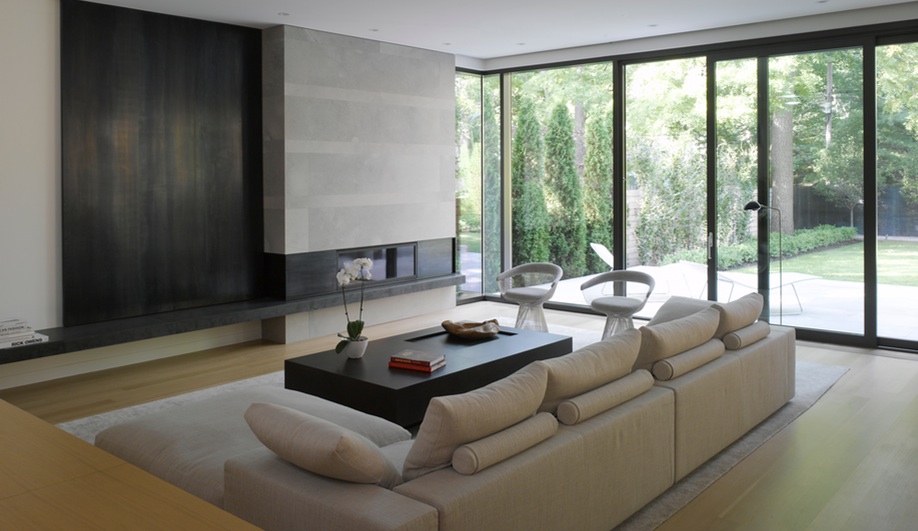 To tie the interior spaces to the outdoors, the Loir Limestone fireplace surround is a visual match for the house’s exterior cladding, and sliding glass walls provide full access to the back terrace. The Platner Wire Chairs are from Knoll. 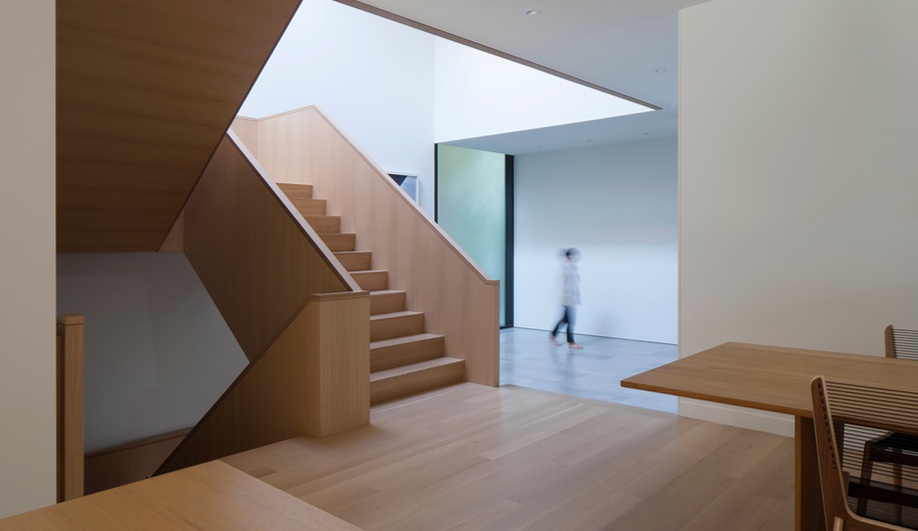 The double-height foyer is framed by the rift-cut white oak panels that tie the floating staircase to the dining room floor. At right, the Light dining table by Riva 1920 is paired with Jacques Guillon’s mid-century Cord chairs, reissued by Avenue Road. 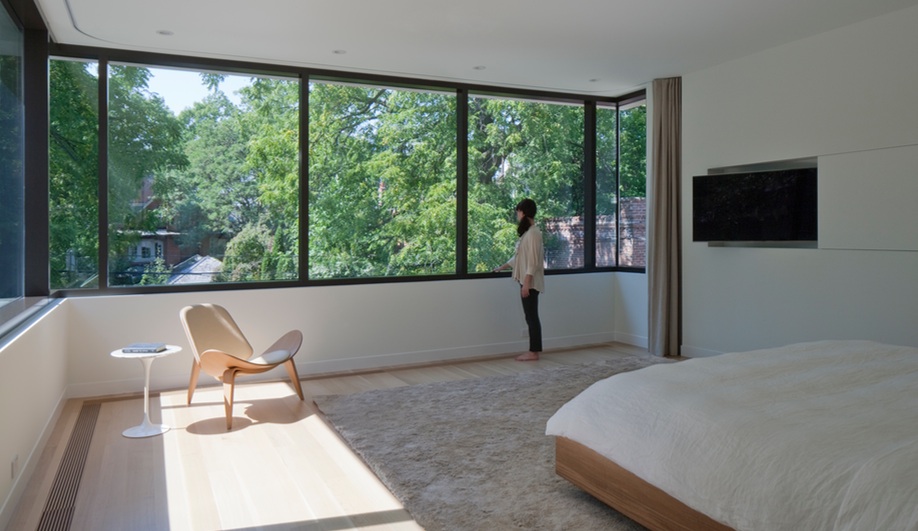 Runners set flush into the ceiling allow drapes to be drawn across the bedroom’s expansive windows, or virtually disappear into a nook when not in use. The CH07 shell chair is by Carl Hansen, accompanied by a Saarinen Marble Tulip Table. 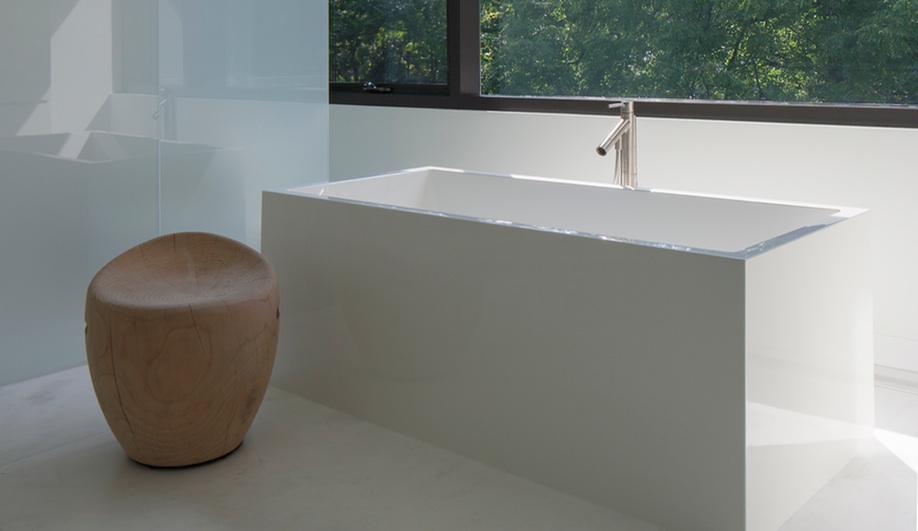 The master bath shares the copious glazing found throughout the house, while the Cube bathtub by WetStyle mirrors the structure’s orthogonal lines. The solid cedar Queen stool is by Riva 1920.

Large plate glass windows overlook a back yard with an inviting terrace. 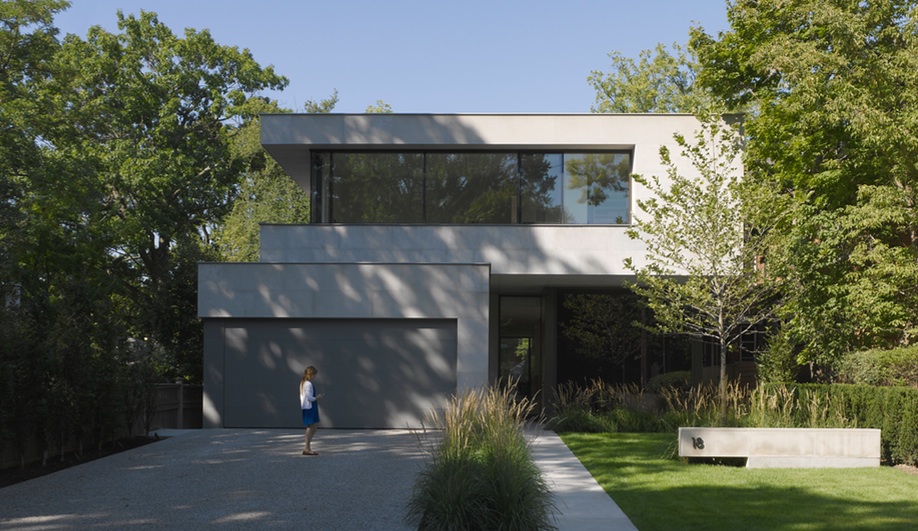 When Atelier Kastelic Buffey was approached to design a home for a family of five, the firm was asked to achieve that elusive balance: a clean, contemporary house but one that eschews the glassy frigidity of the archetypal Modernist cube. “The white cube school of thought has a place in contemporary architecture,” says principal Kelly Buffey, “but it should be re-thought in a new way that incorporates current lifestyles and living patterns.”

Now complete, the house – two solid blocks, one cantilevered sculpturally over the other – is an elegant monolith with a modern sensibility that nonetheless manages to blend into a street lined with Edwardian, Tudor and Georgian Revival-era homes. The choice of cladding was key in achieving this. AKB selected a limestone that matches the stone of the surrounding structures, even while the house’s form does not. It clads the entire surface, including the underside of the soffits, intensifying the impression that the house was carved out of a single block of stone.

Designed in collaboration with Ashley Botten Design, the 490-square-metre interior is as fuss-free as the exterior. Its surprisingly open plan was achieved through the use of a concealed steel structure. “Despite the size of this open area, it doesn’t feel vacuous because the proportions are well balanced, and defined by changes in floor level and differences in the millwork,” Buffey explains. The sides of the house are essentially window-free; instead, the front and back of the home feature ample glazing, looking onto the street and a lushly cultivated backyard, respectively.

The double-height entrance foyer, topped by a skylight, is bordered on one side by a wood-clad floating staircase. The adjacent dining room occupies part of an L-shaped area that sweeps around the sunken living room to include the kitchen and breakfast nook, which look directly through ceiling-height windows into the backyard. This glazing extends the entire width of the house via sliding doors that allow the living area to be opened to the back terrace to form a continuous space.

Defined as much by what’s hidden as by what’s revealed, the interior is remarkably clutter-free – especially impressive for a family of five. This is thanks to abundant storage: the television in the living room is concealed behind a sliding panel, and camouflaged doors off the kitchen lead to a large mudroom and a walk-in pantry. Upstairs, this visual tranquility is extended into the master bedroom by a television set that tucks away when not in use, and wraparound privacy curtains that can disappear into a dedicated wall space.

Both inside the house and out, materials were chosen for durability, and limited to just a few choices to create consistency throughout. “The proportion and composition of the materials also affects one’s experience of the space,” Buffey says, “and if harmonious, they will evoke a feeling of calm.”