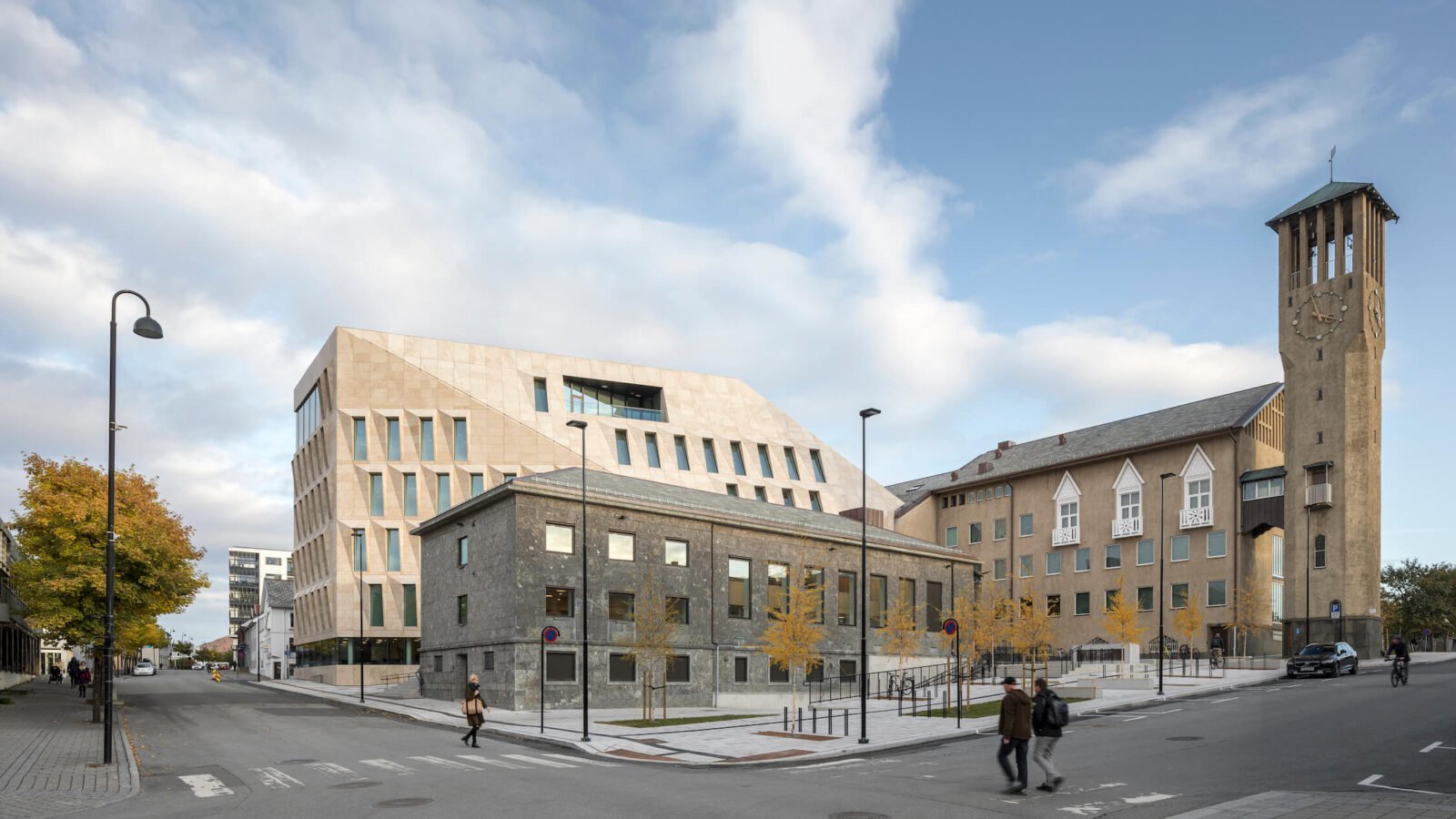 A Striking Town Hall for Bodø, Above the Arctic Circle

In the month of June, the sun never sets on Bodø. But in mid-to-late December, it seldom shows itself – emerging beyond the horizon to grace the northern Norwegian town for less than an hour. The Arctic Circle city of some 40,000 residents experiences extreme contrasts in sunlight and temperature. At the heart of this uncommon urban context, the elegant new Bodø Town Hall responds to both climate and local culture with assertive grace.

Designed by Denmark’s Atelier Lorentzen Langkilde (ALL), the striking six-storey town hall (which replaces a low-slung 20th century building) joins a pair of important civic structures – the former town hall and a handsome heritage bank building – and bridges the space between them on a small urban block.

The angular building commands the prominent block while displaying a sense of contextual deference. The bold diagonal lines of its folded form, which seems to swell expansively from its narrow facade, underscore an unmistakably contemporary intervention. But ALL’s design also deftly continues the slanted datum line of the old town hall. And the dramatically contoured upper levels also create a dialogue with Bodø’s pitched rooflines.

Declarative limestone cladding also conveys a sense of material continuity with the surrounding urban context. Lighter in tone than its neighbours, the building exudes a subtly energetic spirit that nonetheless feels of a piece with Bodø’s architectural character. Punctuated by faceted windows, the angled fenestration is designed to maximize natural light while protecting the building from solar heat gain during northern Norway’s endless – and surprisingly warm – summer days.

Inside, a six-storey atrium dominates the space. Clad in blond wood tones and bathed in natural light from the angled windows above, the spectacularly breathable room forms Bodø’s grandest civic space. Dubbed a “citizens forum,” it is open to the public, with ample seating at the heart of the ground floor. In the dark winter months, it is a jolt of warmth and vitality.

The atrium is accented with a thought-provoking art installation by Norwegian artist Per Kristian Nygård. Dubbed Dikt till Byråkriatiet (Poem for the Bureaucracy), the installation is made up of a series of tables and chairs affixed vertically up a wall. It’s a playfully disorienting artwork that speaks to the nature of bureaucracy and (perhaps) the reality of living in a place of sunlit nights and lightless days.

Nygård’s artwork reaches beyond the building’s meeting rooms and workspaces, stretching nearly all the way up to the sixth storey’s glass ceiling. There, another grand room awaits: a cafeteria that overlooks the landscape through panoramic windows. Above the ode to bureaucracy, it’s an ode to Norway’s natural beauty.