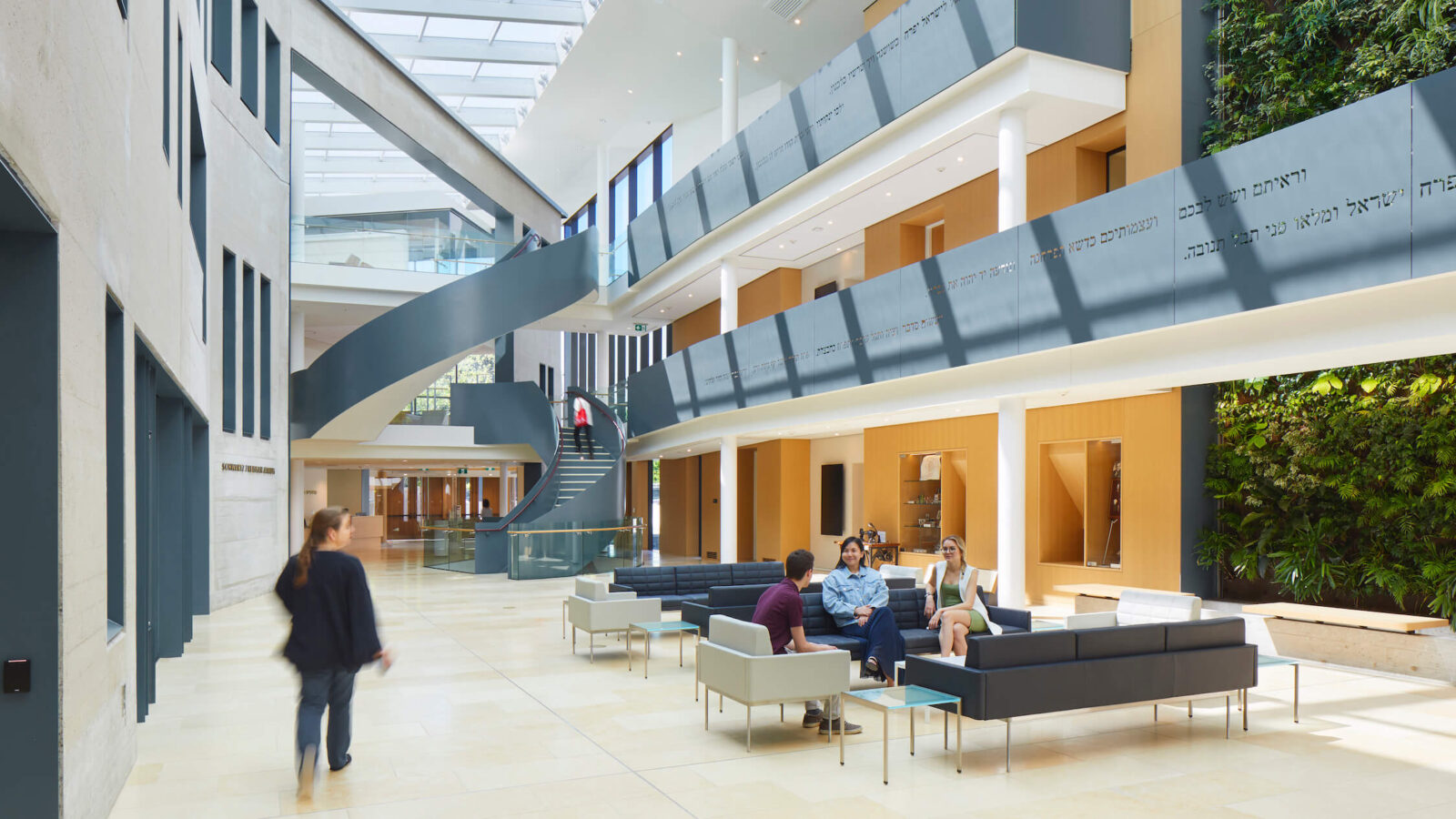 The new heart of Toronto’s Holy Blossom Temple is nestled between two cultural and architectural histories. To its west, the temple’s romanesque revival sanctuary dates to 1938, when architects Chapman and Oxley unveiled the grand room that still serves as the synagogue’s spiritual centre. To its east, a modernist 1960 school building by John B. Parkin complements the older building’s liturgical sanctity with an educational mandate. And in the middle, the light-filled new atrium by Diamond Schmitt Architects carves out a space for community.

Prior to Diamond Schmitt’s intervention, the site was a narrow courtyard between Holy Blossom’s two existing buildings. It was an awkward liminal space, occupied only by a pair of corridors that linked the sanctuary to the school. The two passageways offered little opportunity for social interaction and activity – and inadvertently created a somewhat maze-like circulation through the complex. The new space changes all of that. 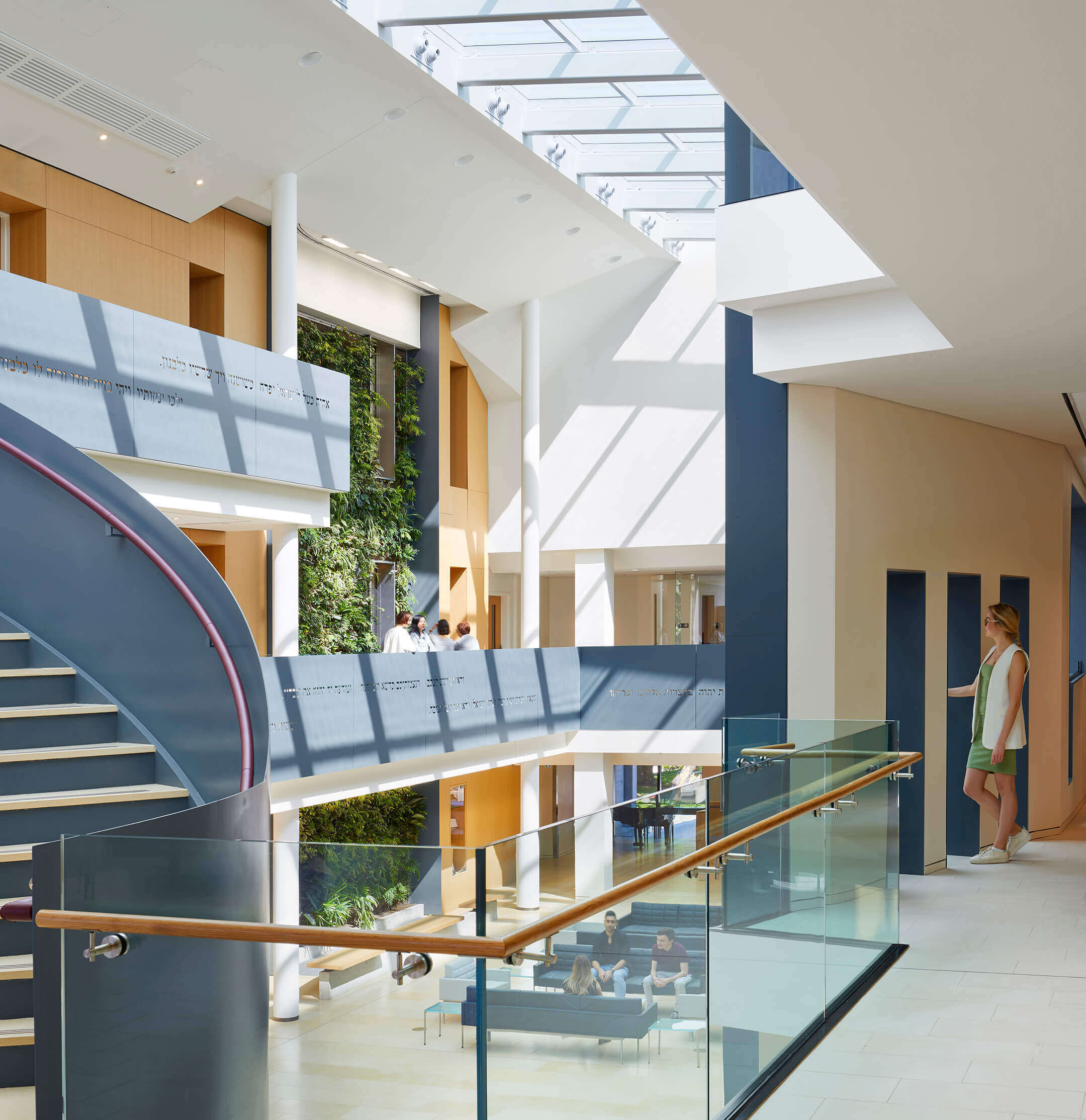 Clad in a transparent glass envelope, the atrium is an airy counterpart to the unyielding concrete structures that flank it. Flooded with natural light, the new four-storey room drastically improves circulation while creating a spacious, breathable gathering space. Offering new ingresses between the older buildings – both of which were renovated as part of the project – both ends of the atrium also open out to new street-level entrances. 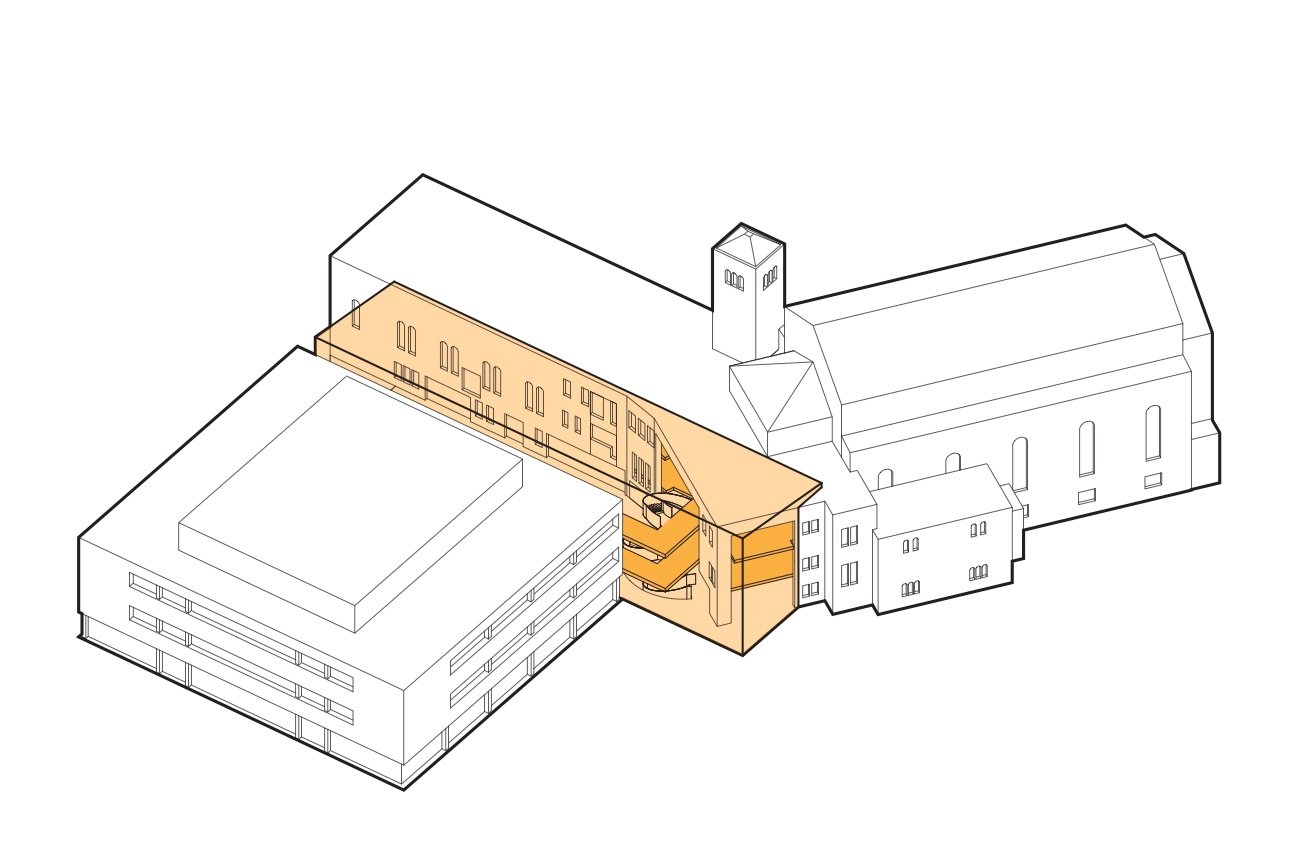 A diagram of the site highlighting the new atrium in between the 1960 school building (left) and the 1938 sanctuary (right).

The lush living wall that accents the central room is paired with blonde wood finishes that add a touch of warmth. Meanwhile, the opposite side of the atrium retains the board-formed concrete facade of Chapman and Oxley’s sanctuary building. 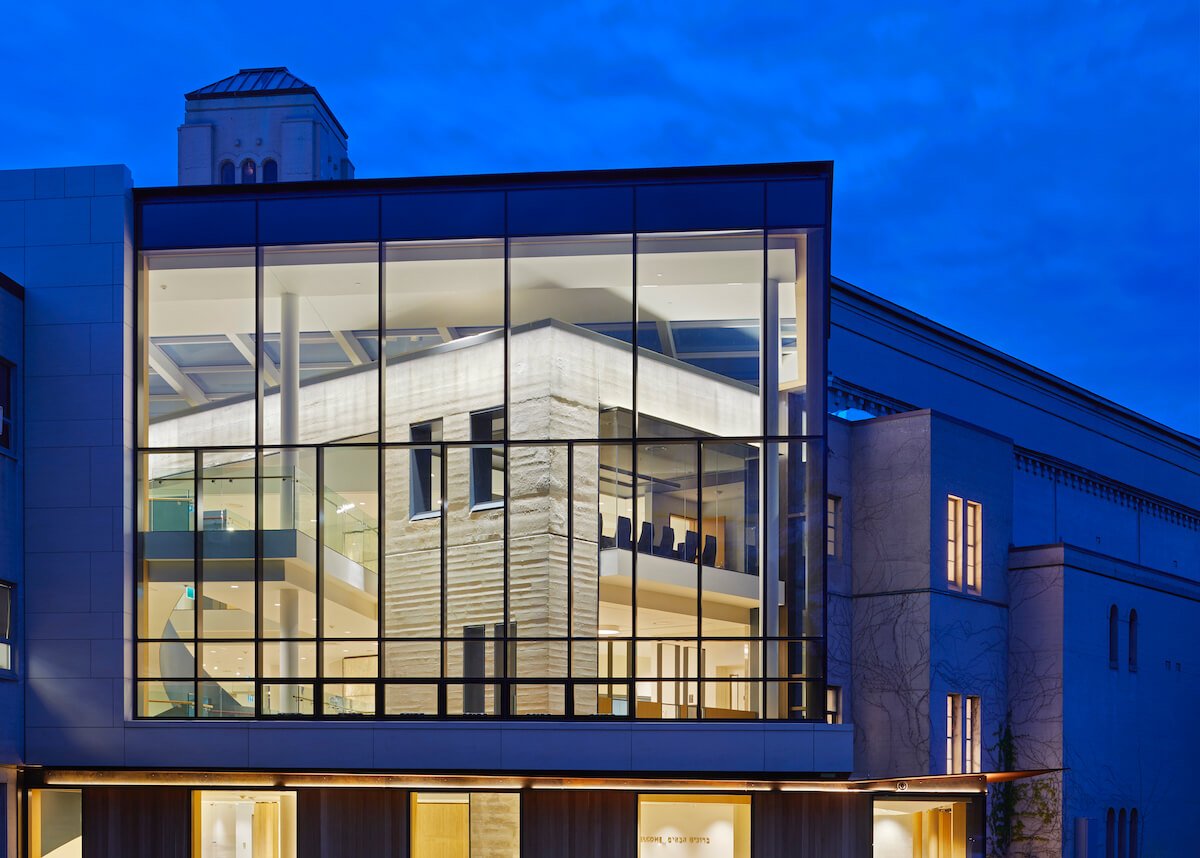 While parts of the administrative areas of the 1938 building were extensively reconfigured, Diamond Schmitt’s intervention faithfully maintains the shell of the structure, with part of the angular concrete facade now encased by the atrium’s transparent glass envelope. Here, the deferential lightness and transparency of Diamond Schmitt’s addition accentuates – and celebrates – the weighty presence of Chapman and Oxley’s raw concrete. 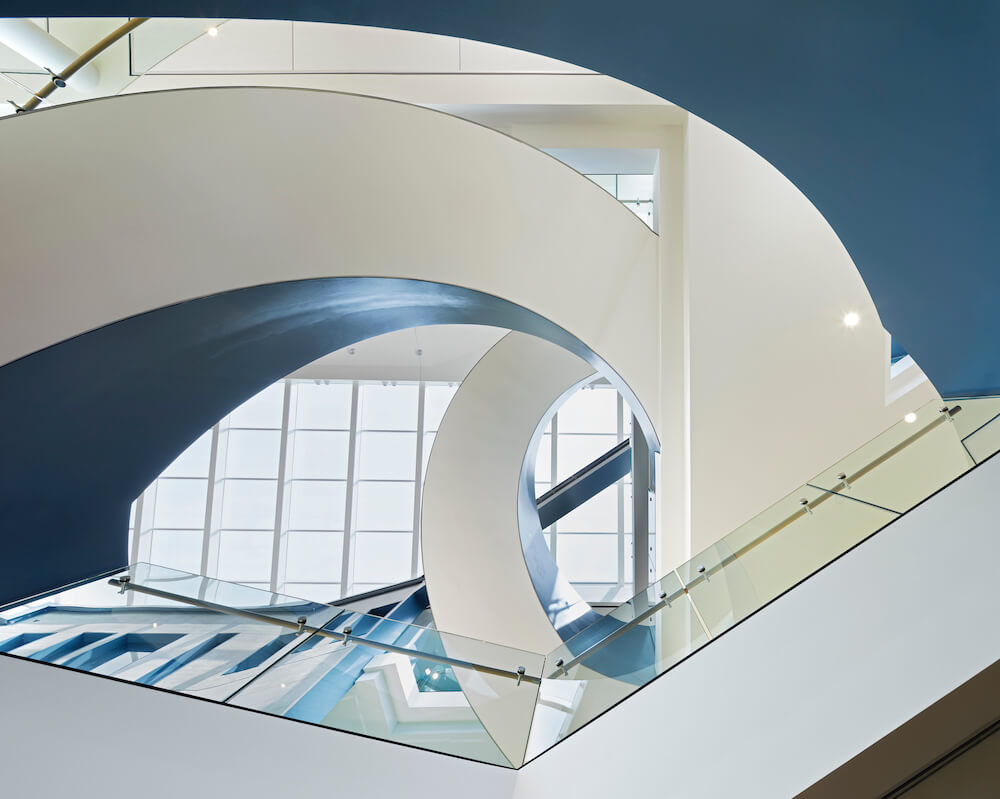 Inside, the angularity of the 1938 building envelope is paired with the sinuous curves of a new staircase. A deft counterpoint to the linear composition of Holy Blossom’s 1938 and 1960 facades, the stairs reference the curve of the sanctuary’s inner apse. The blue metal railing is extended across the atrium’s balcony rails – which are carved with Hebrew scripture – and also accents windows and soffits to create a sense of continuity and cohesion. 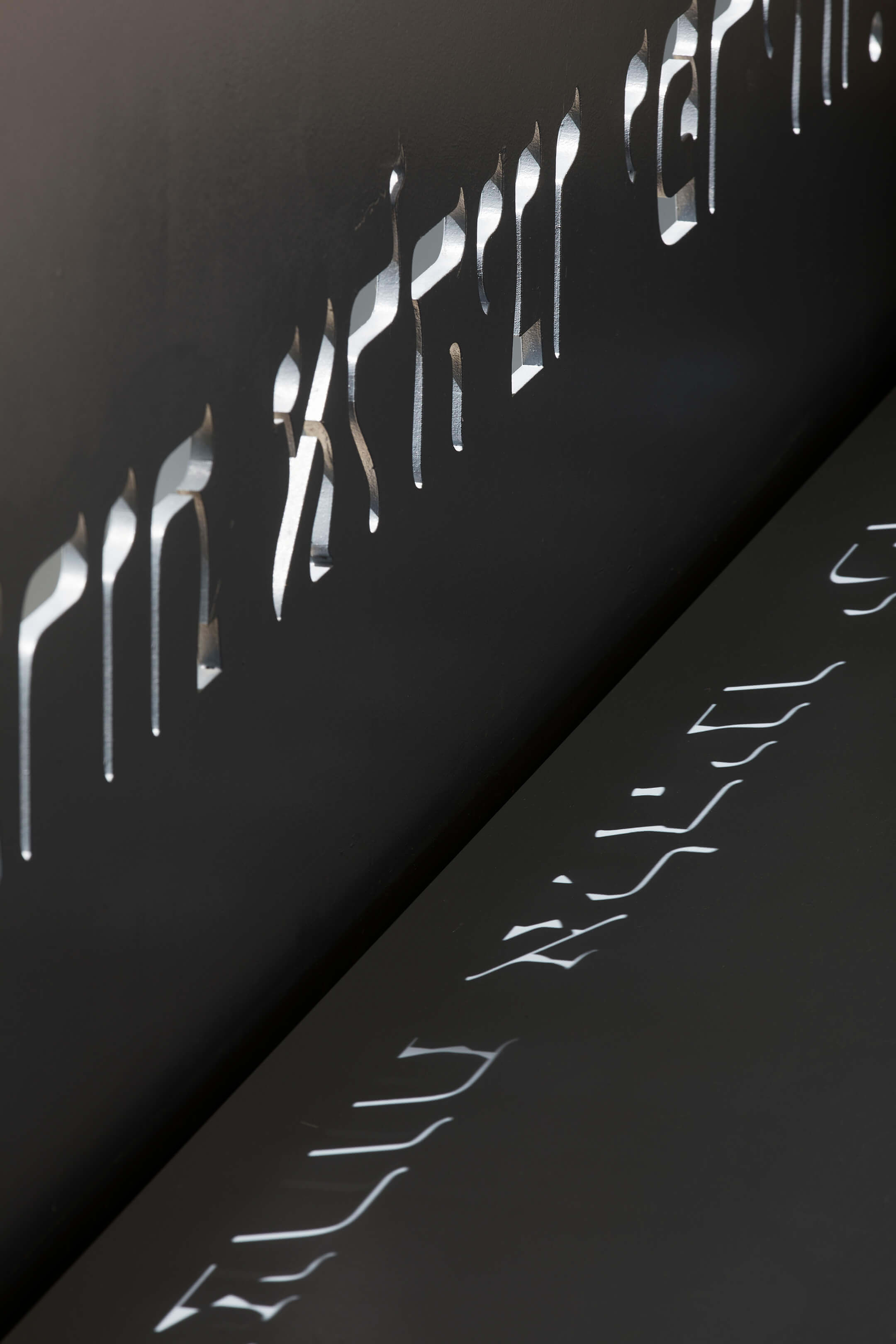 While the atrium’s airy living room ambiance dominates Holy Blossom’s new wing, Diamond Schmitt’s addition also incorporates several smaller multi-purpose spaces, as well as administrative offices. On the ground floor, a small café is joined by a Judaica shop and a library, while the upper floors are home to a series of multi-purpose rooms. The 1,100-seat sanctuary is now flanked by a series of benches and semi-enclosed spaces, allowing moments of private respite for members of the congregation. It’s a vital amenity for parents of young children.

For the synagogue – which ranks as the largest Reform congregation in Canada – the dual emphasis on public life and private comfort was a priority. Speaking to the Toronto Star ahead of the project’s 2015 groundbreaking, Senior Rabbi Yael Splansky explained that “the mortar and brick work we are preparing for is being matched by a more private, more communal and intimate way of connecting.” 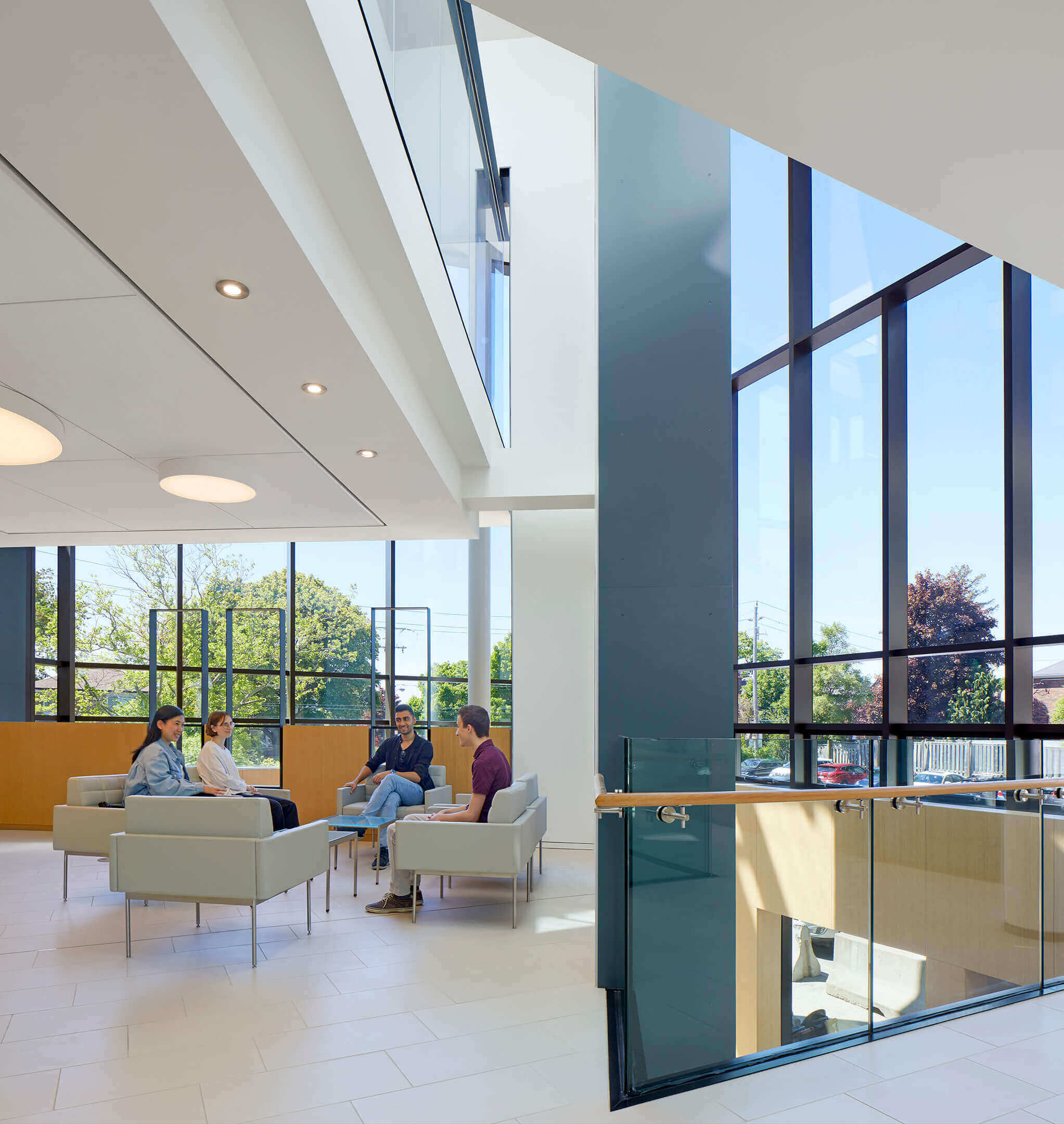 During my tour of the construction site in 2016, Diamond Schmitt’s Weng-ying Lu noted that the design approach was jointly informed by a survey of the congregation – who voiced an urgent need for family-friendly communal spaces – and an understanding of Jewish tradition.

“The three main pillars of a Synagogue are the House of Prayer (Beit Tefillah), House of Study (Beit Midrash), and the House of Gathering (Beit Knesset),” she told me, adding that each of the synagogue’s three wings reflect a pillar. While the 1938 sanctuary offers an appropriately awe-inspiring space of prayer and the modernist school provides an unadorned place of study, the new expansion is a conduit for public life. 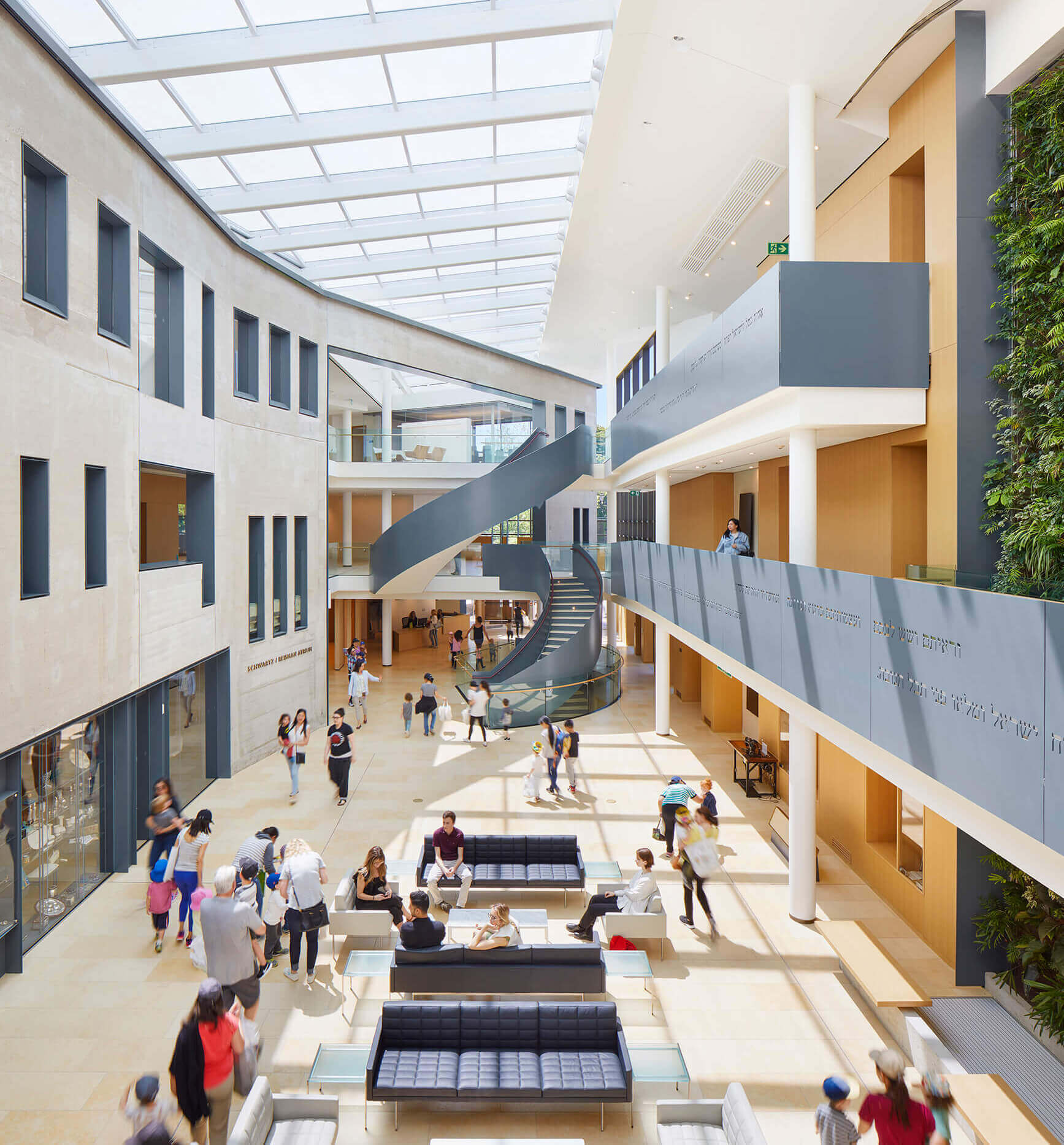 It’s a design rooted in Jewish tradition, but its lessons are universal. By providing spaces for friendship, family and gathering, the temple weaves spirituality into the fabric of daily life – and vice-versa. With membership in churches, synagogues, and mosques at an all-time low in North America, it’s a form of outreach that merits consideration. In transforming the overlooked space between the synagogue’s 20th century buildings, Holy Blossom has laid out a roadmap for spiritual life in the 21st.