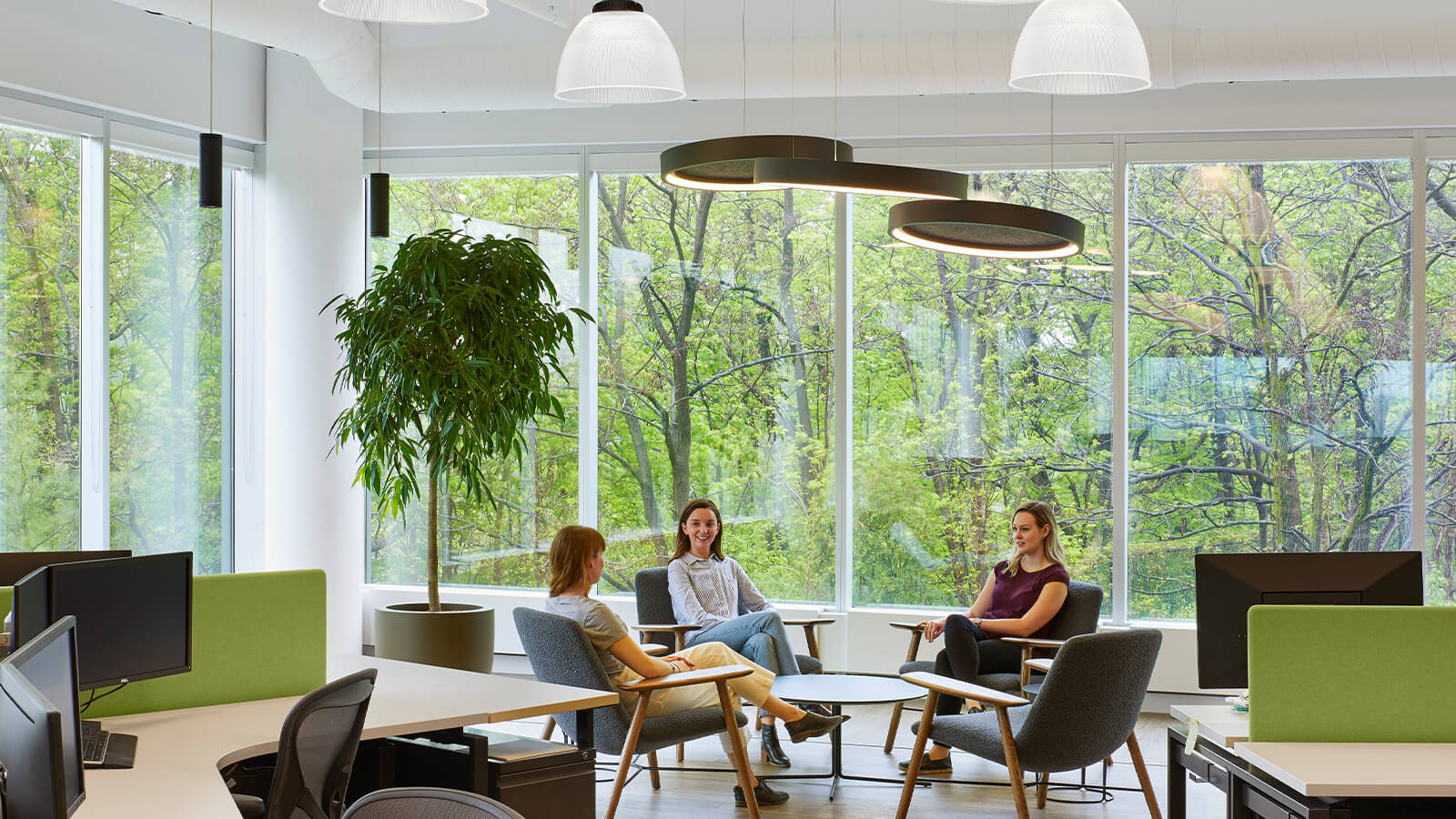 When Toronto tech firm Volaris moved its headquarters from the fifth floor of a building with unenvious views to the city’s airport and surrounding traffic-clogged roadways to a ground-floor, window-wrapped office looking onto a forested ravine, it recognized an opportunity to embrace a more relaxed and comfortable pace. To help turn this idea into reality, the company called on local interior and architectural design firm Bartlett & Associates (B|A), who has long taken a biophilic and holistic approach to its work. 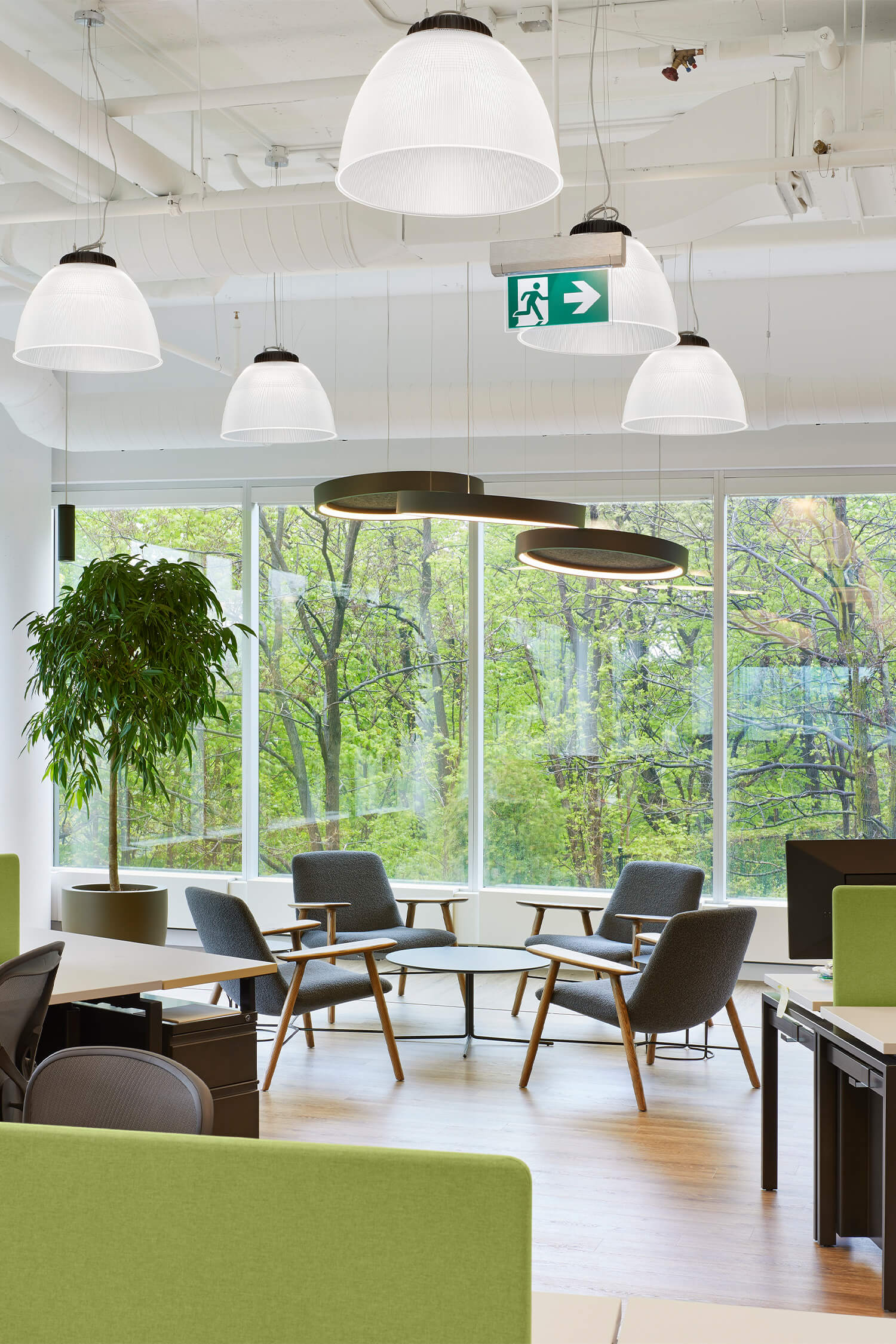 For Volaris, the B|A team, led by founder and president Inger Bartlett, was tasked with creating a space that not only emphasized a connection to nature but also one that was flexible, fostered creative collaboration while also supporting focused, heads-down work and broke apart the hierarchal setup of its previous layout by eliminating all private offices and placing all employees – from the CEO to the newest hire – on the same level. 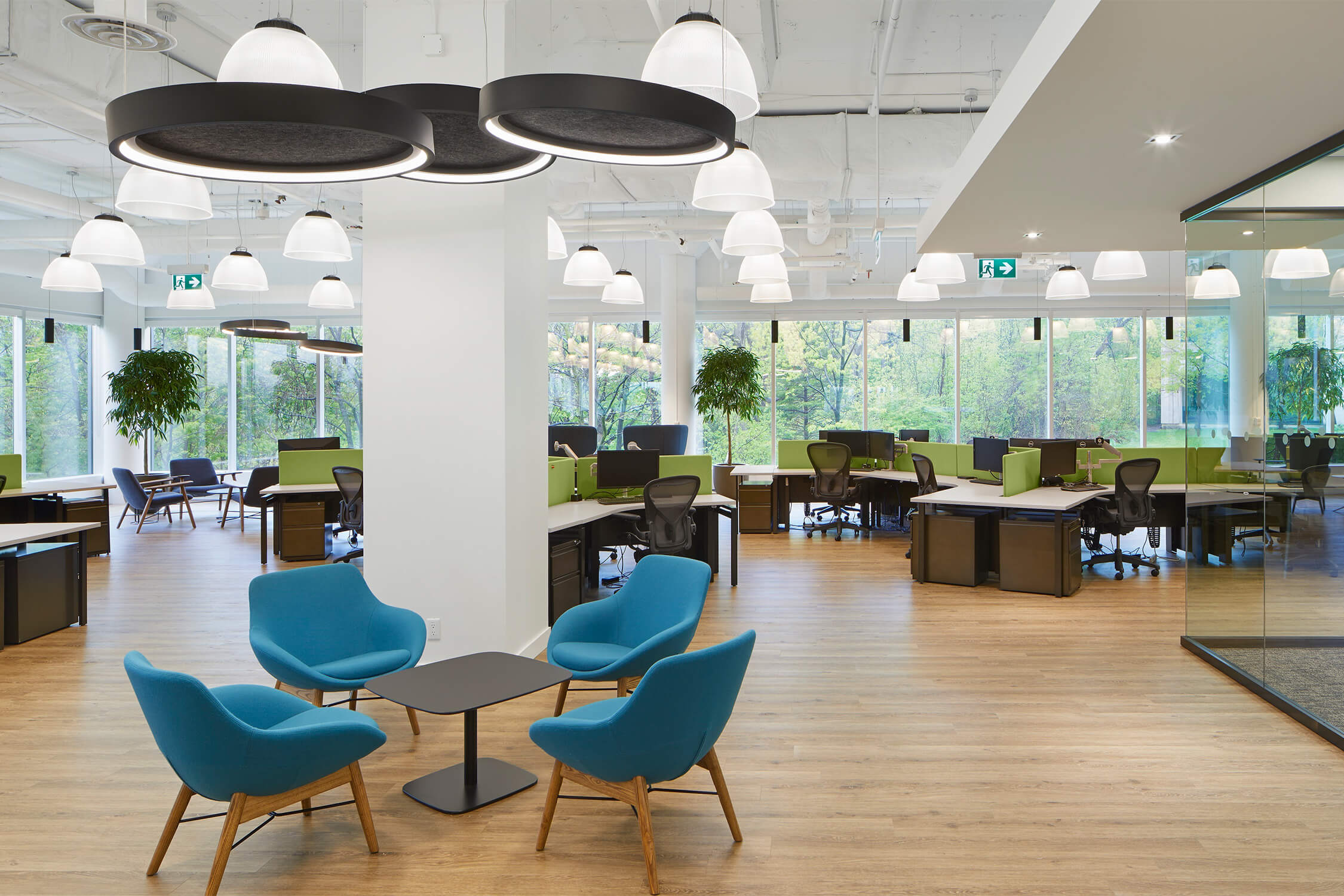 “As a studio, B|A always tries to create links to nature in our workspace projects,” says Bartlett, referencing the “everyday architecture of Scandinavian cities” and its ability to connect with the natural world through “materiality or views, large-scale or small elements” as inspiration for the Volaris space. To maximize that relationship to the outdoors, Bartlett et al utilized a well-considered palette of organic materials, soothing colourways and other subtle indicators.

Rather than a rigid formation of desks for the 75 employees (some of whom are currently working remotely), B|A instead arranged a series of 120-degree workstations from Inscape in a circuitous layout at the centre of the 1,124-square-metre space that promotes movement akin to walking the trails found in the conservation area beyond the floor-to-ceiling windows. “We wanted people to move through the space in a way that reflects those paths, that feels like a nature walk they might take at lunch,” says Bartlett. “It’s very purpose-driven – when people are walking through a strict grid layout, they tend to stick to the same paths and move quickly, whereas this more organic flow of movement promotes more relaxed behaviour, more interaction and spontaneity.” 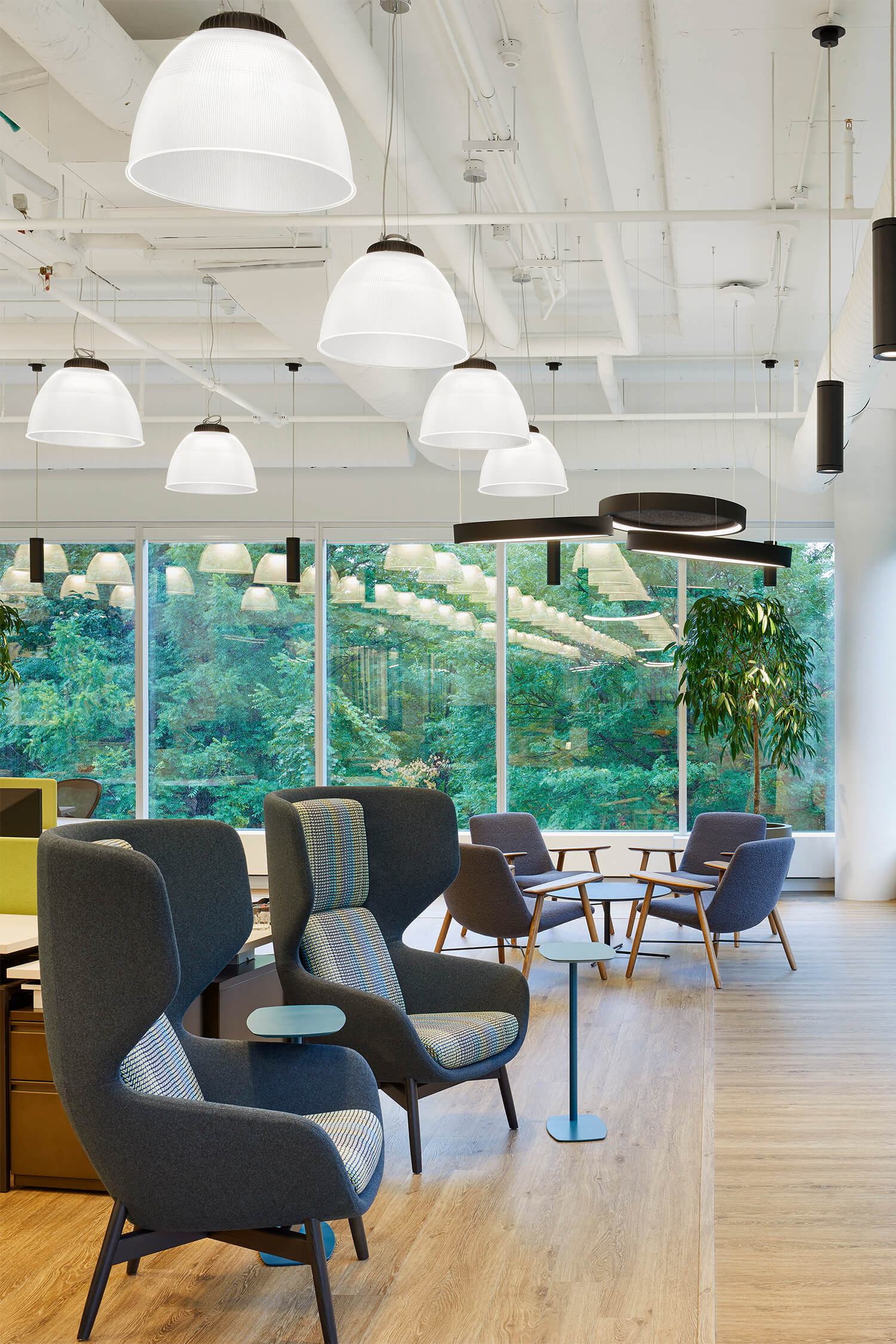 Corralling the workstations at the core also made way for a 1.6-metre “boardwalk” that rings the perimeter. Demarcated by a change in orientation of the Torlys wood-plank flooring, the pathway is dotted with small breakout zones for two to four (furnished with soft seating and tables from Keilhauer) that are accessible to all and ensure every employee benefits from views to the outside; the shared amenity also plays up the overall physical transparency that Bartlett wanted to integrate to further openness and interaction. 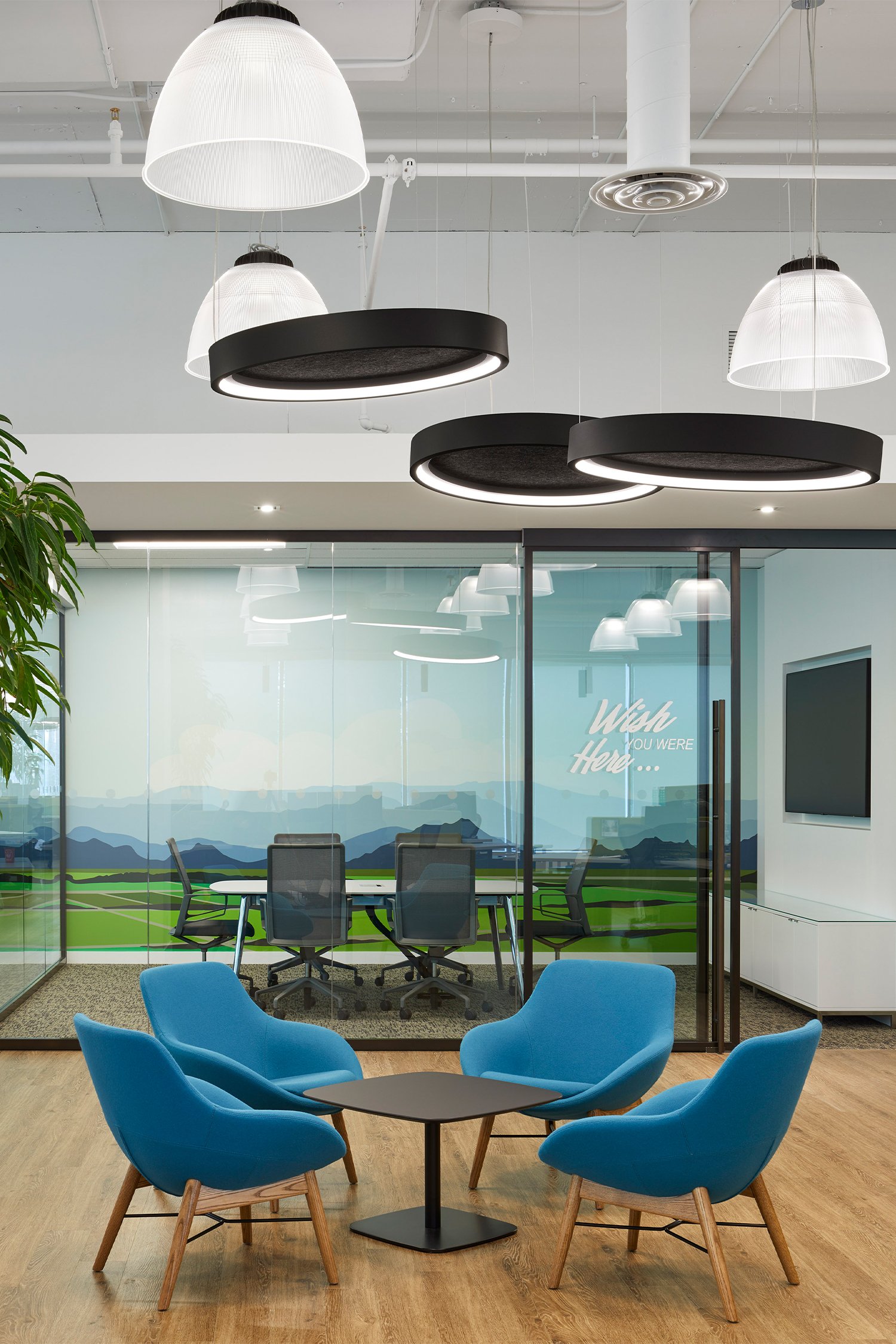 For large gatherings or scenarios when privacy is a must, like meetings and confidential or personal phone calls, eight glassed-in rooms line three walls to form an L-shaped bank, each positioned to maintain views to the outside. Running along one wall of three meeting rooms, a mural by Maharam depicts an abstracted mountainous landscape that playfully references the natural surroundings. 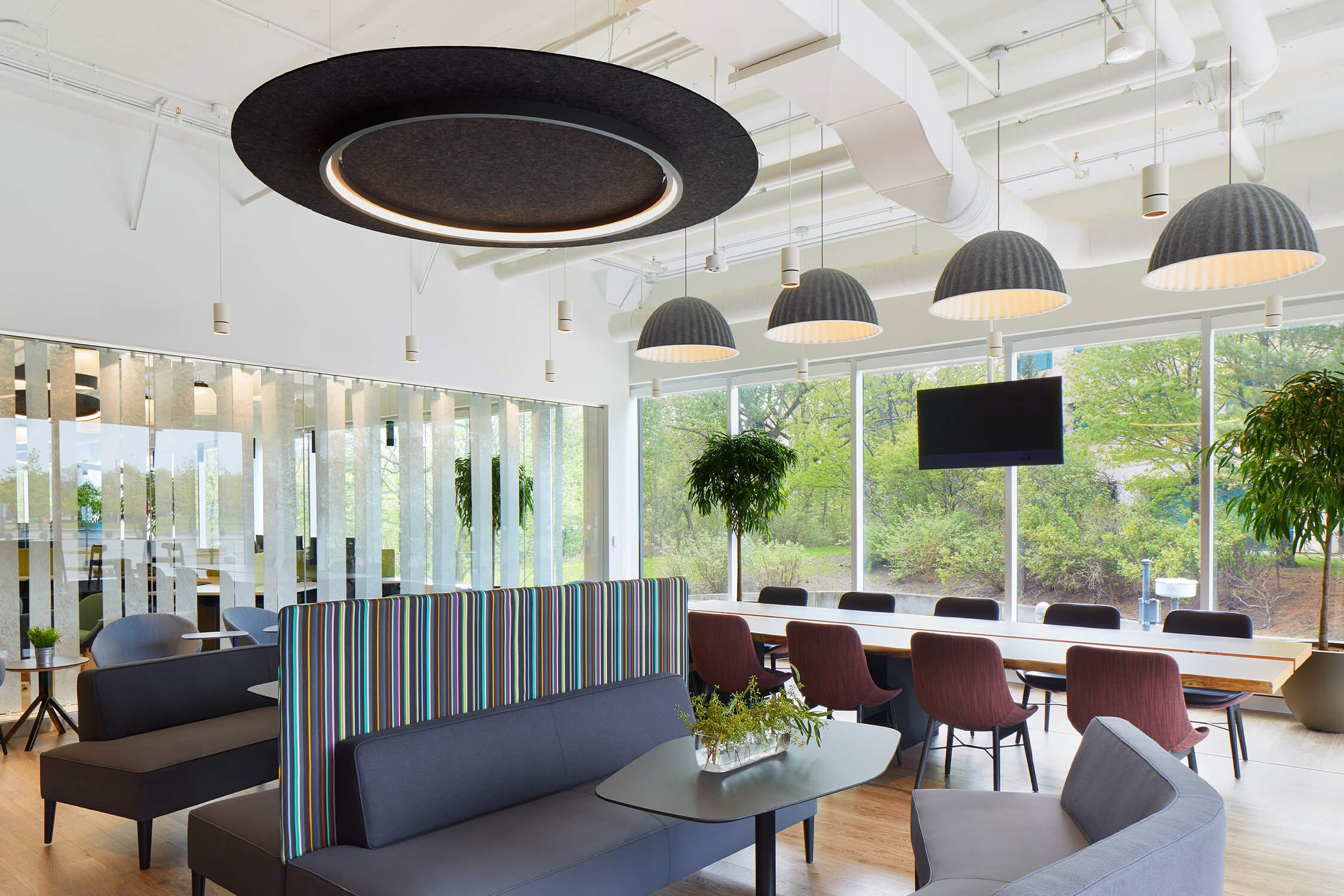 At one end, the communal lunchroom is separated from the buzz of activity by a glass wall fitted with fixed 3form resin panels angled to provide a visual separation while still allowing light and filtered views to come through. 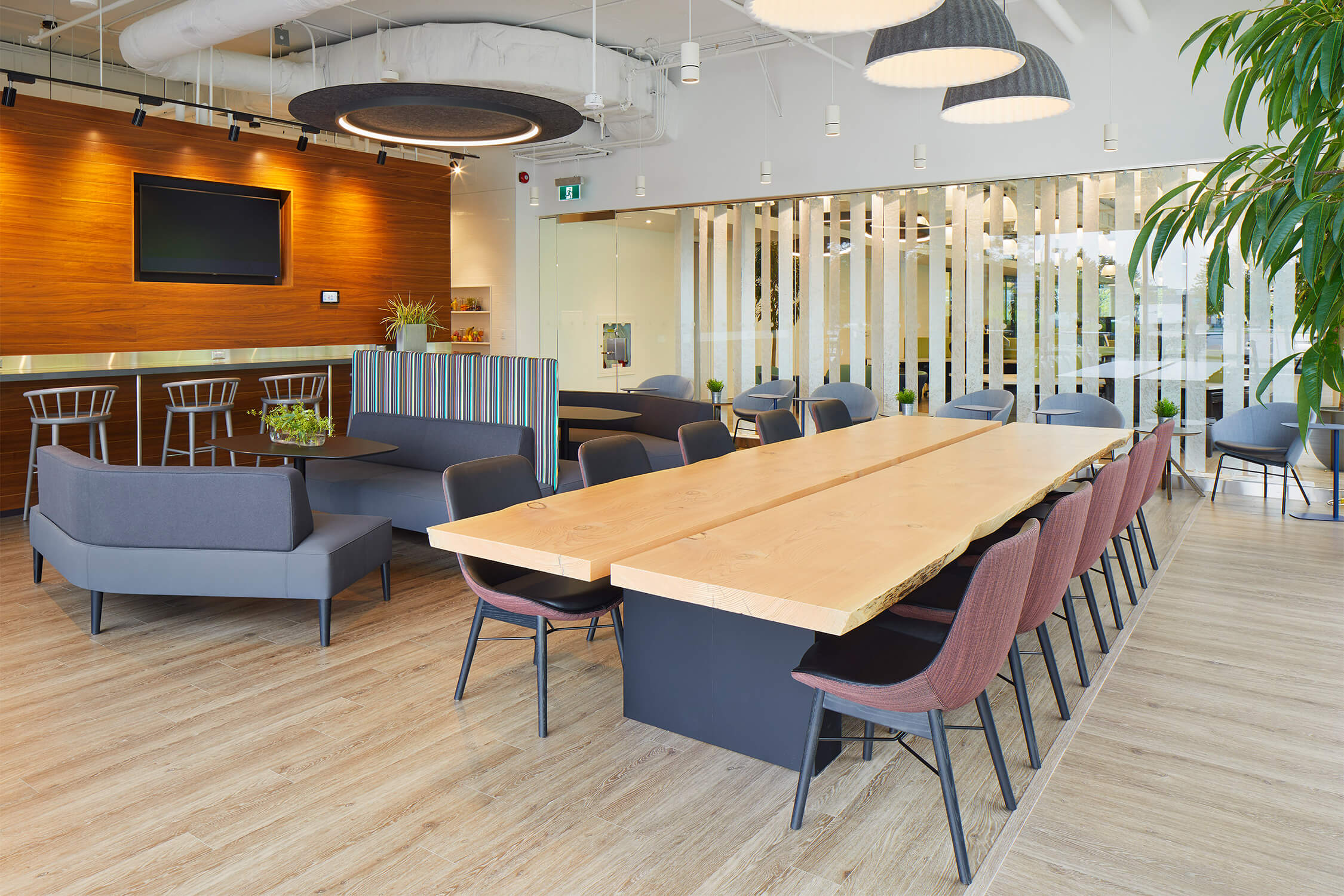 Here, a solid walnut-clad wall creates a warm, home-like atmosphere that is enhanced by an expansive live-edge Douglas fir harvest table (both custom milled by MCM) and generous amounts of soft seating in the form upholstered banquettes and dining chairs. 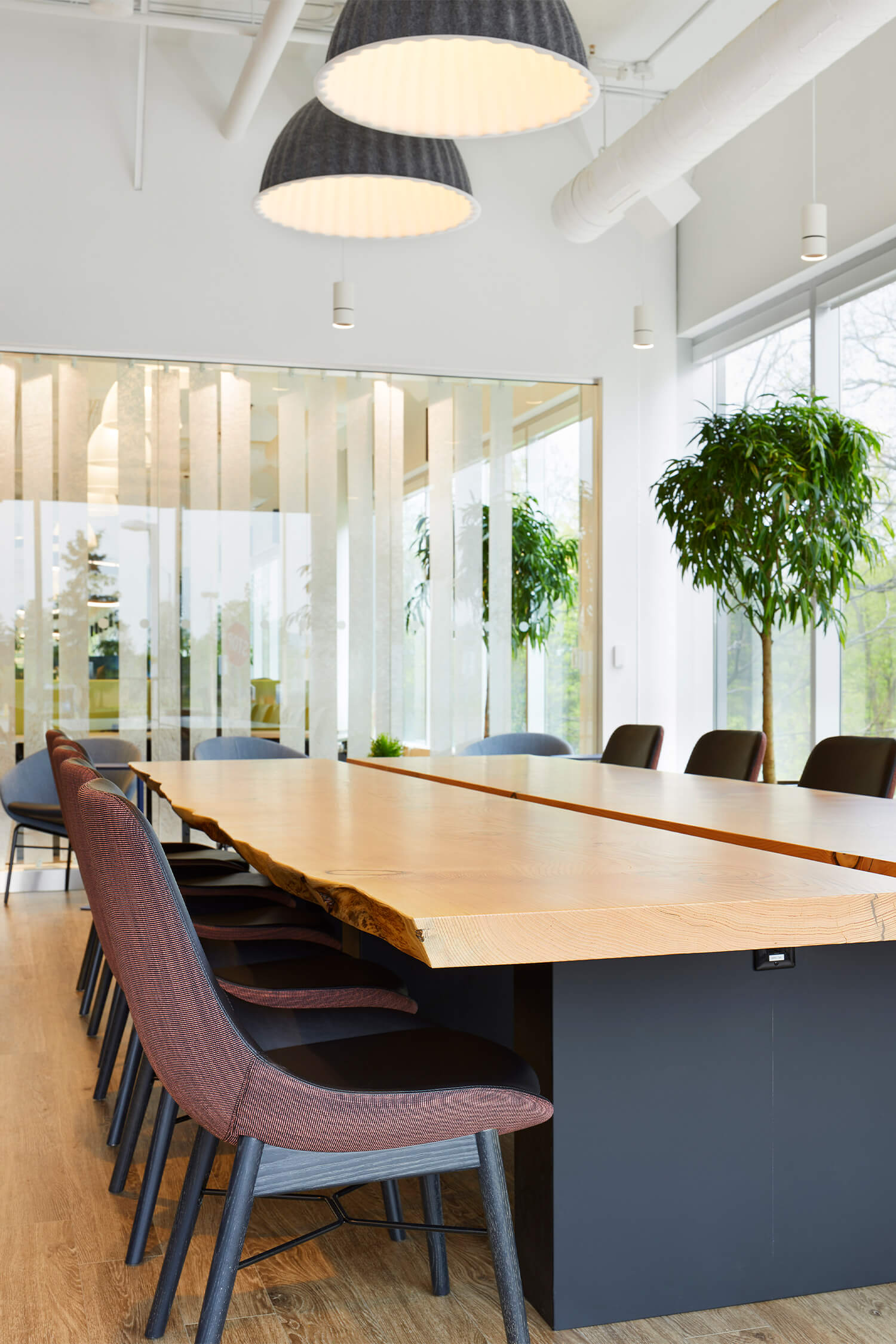 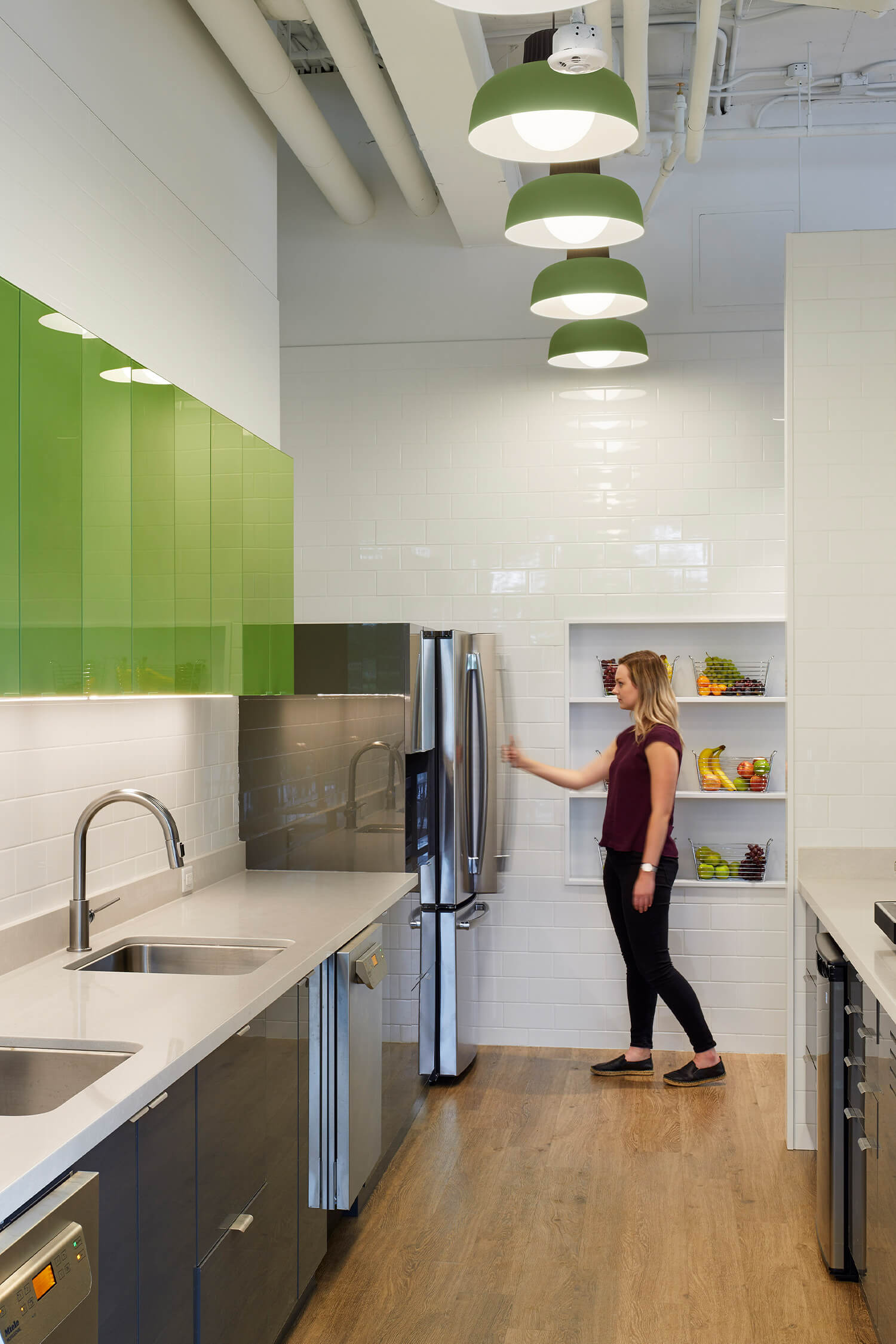 The working kitchen is concealed behind the wood wall, which buffers the clatter of food prep and clean up from the tranquil lunch spot; green back-painted glass cabinets extend the nature-inspired palette to the office’s only windowless space.

Overhead, the ceiling was stripped back to reveal its mechanical components and then painted a clean white. While an industrial touch, it’s one that also manages to “allude to nature,” according to Bartlett, by its lack of pretense, and helps to open up the space, making it feel larger, brighter and airier. To soften the raw structure, felted acoustic lighting fixtures are strategically placed throughout. Whereas Volaris’s previous office created a day-to-day pace that felt rushed, chaotic and unfocused, the new space – recently the winner of a Value of Design Award by Interior Designers of Canada and short-listed for the SPID International Design Awards – has had a positive impact on the occupants, providing them with a place where they feel much more socially and professionally connected and one that is flexible and better equipped to navigate the current and future working environment.