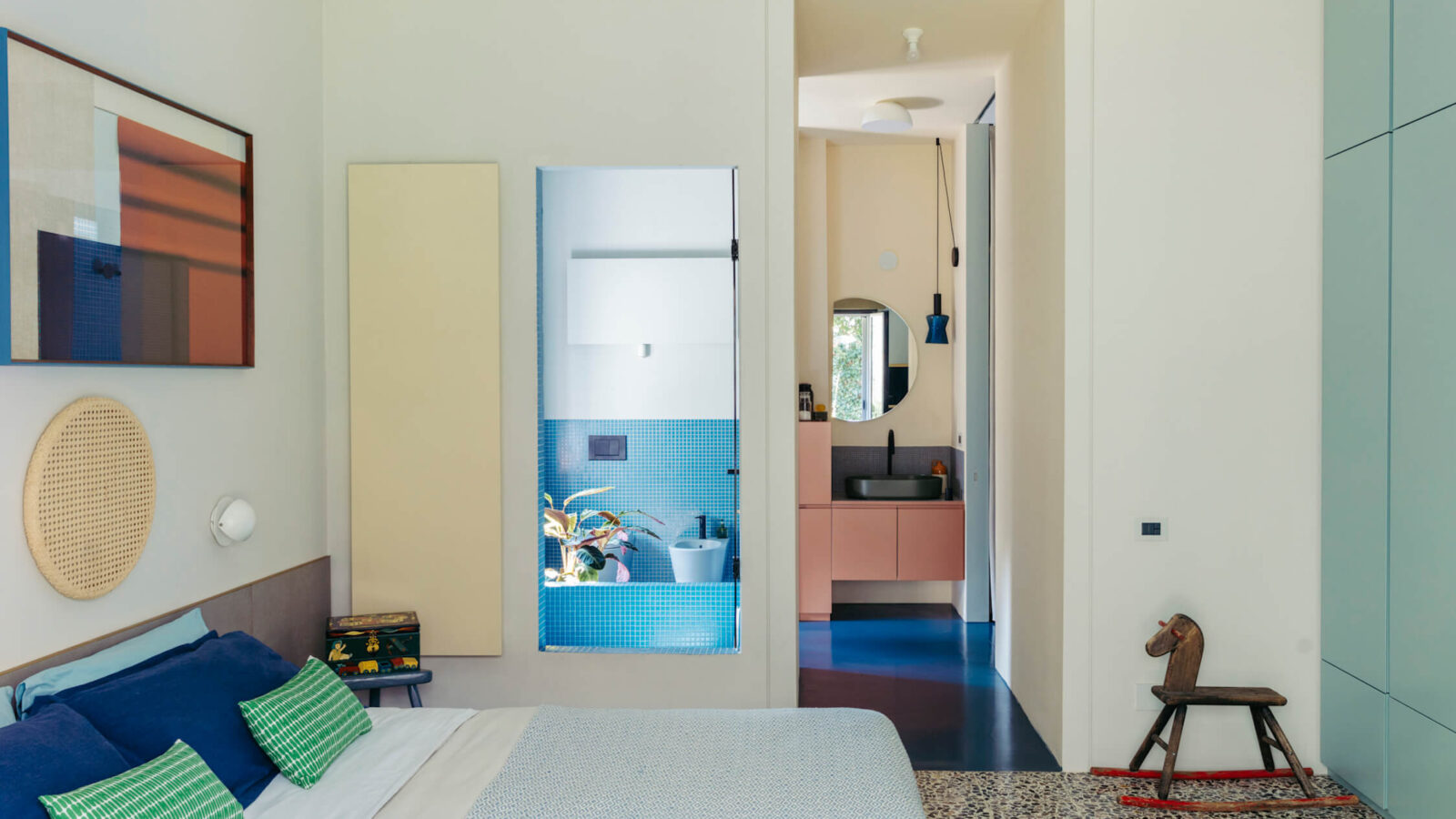 A Turin Apartment Where Colour is King

In a long-abandoned apartment inside a 1960s residential building on the foothills of Turin, the studio PlaC and the set designer Hyemin Ro found a diamond in the rough. Yes, the original layout was odd: The entrance area and living room were in the back, overlooking a sloped terrain, while the bedrooms – along with the kitchen and one bathroom – faced the front of the building, with its wraparound view of the city. So, the first thing they did was invert the 110-square-metre plan.

In the new apartment, the day zone brings together the living room and the kitchen at the front of the building, where they “exploit the panoramic, 180-degree view over the city,” say the designers. The night zone places the bedrooms at the back of the apartment, where they enjoy less intrusive, more calming views onto nature.

This organization was key to creating an uninterrupted flow and sight line from the entrance, where as soon as one enters the apartment they can take in the gardens at the rear and side, as well as the city in the front. To accentuate this sense of the harmonic whole, the designers used full-height sliding doors throughout, as well as a novel intervention – sliding curtains, suspended from ceiling-mounted rail systems – to delineate or dissolve the separations between kitchen and living area, desk and bookshelf, storage cupboard and corridor.

These curtains are in unabashed hues of yellow and blue, highlighting an interior palette that does not shy away from colour. In most of the apartment, blue epoxy resin was used for the flooring. The only exceptions were the bedroom, where the original graniglia tiles were kept intact, and the entrance, with its existing terrazzo. These relics were picked up by the designers as accents for the custom furniture they created: the same chunky terrazzo shows up on the countertop for the red kitchen island.

Also designed by Studio PlaC + Hyemin Ro, the main kitchen cabinetry is made of lacquered MDF with a top in PaperStone (a natural material made by combining recycled paperboard and natural resins). It’s a rare use of a subtle white tone in a space that embraces the full spectrum – even for the walls. “We used a grey Farrow & Ball paint, which perfectly reflects the green of the hill and the warm red and orange colours of the Torinese sunsets,” says PlaC architect Chiara Bertetti.

The interior’s smaller details also deserve attention: the sculptural coffee table, with its glass top and coloured-concrete legs resembling ocean-smoothed stones; the ensuite shower, directly accessed from the bedroom via an elevated door sliced into the bright blue tile; the corner-mounted custom desk painted a forest green. In moves big and small, PlaC and Hyemin Ro have created a home that will be treasured – and, one imagines, jealously guarded – for many years to come.