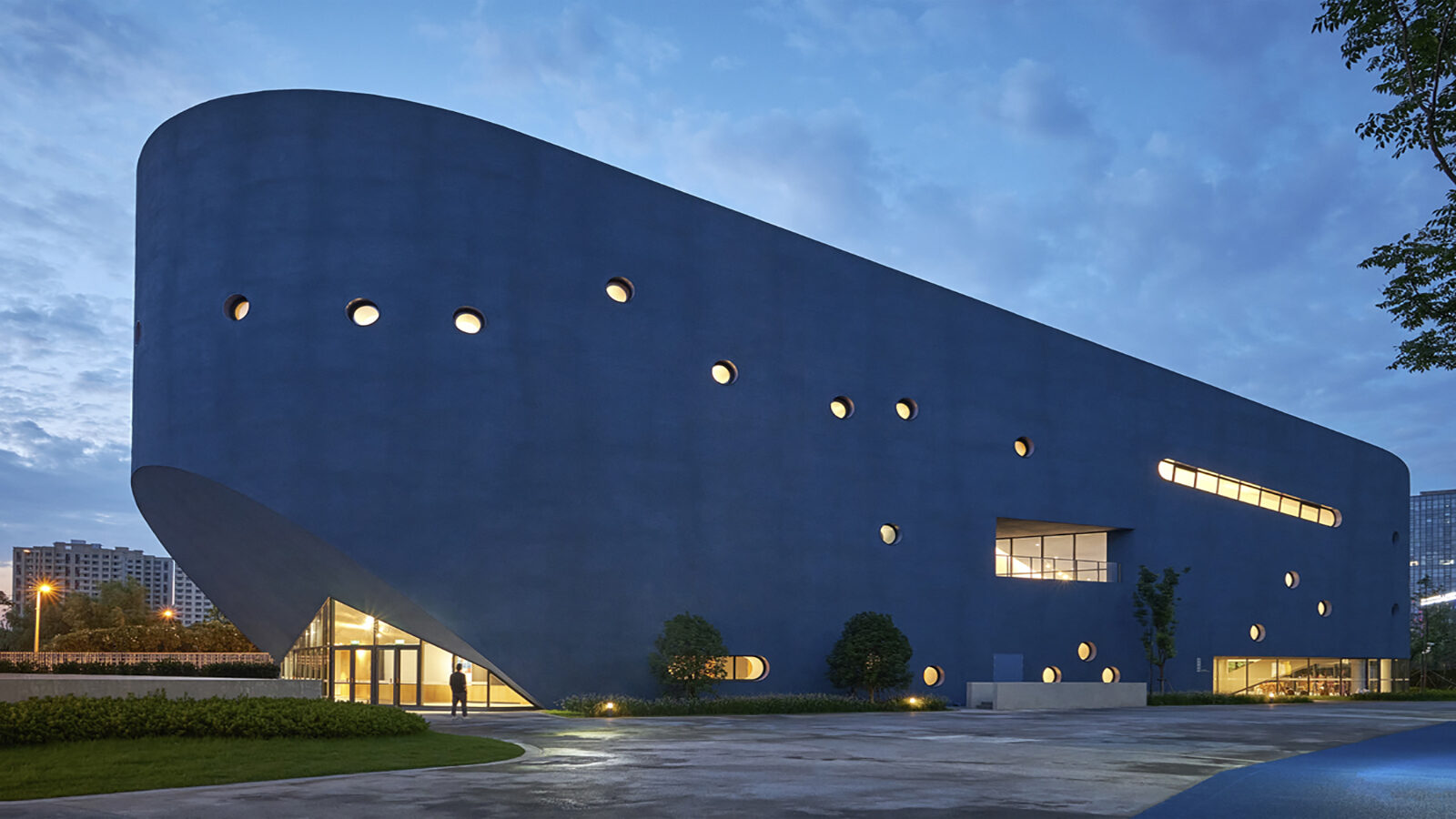 A Whale of a Library Lands in Shanghai

The OPEN Architecture project, known by some as the Blue Whale, is a library, theatre venue and community hub in one.

For such an imposing, monolithic structure, Pinghe Bibliotheater — the cornerstone building in a new Shanghai school complex by OPEN Architecture of Beijing — is surprisingly versatile both functionally and symbolically.

Anchoring one edge of the “village-like” campus, on a site where a major highway meets an ancient canal, the 5,372-square-metre facility, which has been nicknamed the Blue Whale for its size, shape and colour, integrates various typologies “like a Chinese puzzle.” Among them are a library, a 500-seat theatre, a 150-seat black box space, a cafe and a roof garden. According to the design team, which eschewed creating a megaschool in favour of multiple buildings, the Bibliotheater not only gives an identity to the newly realized precinct, which serves some 2,000 students aged three to 18, but telegraphs the importance of the activities inside. 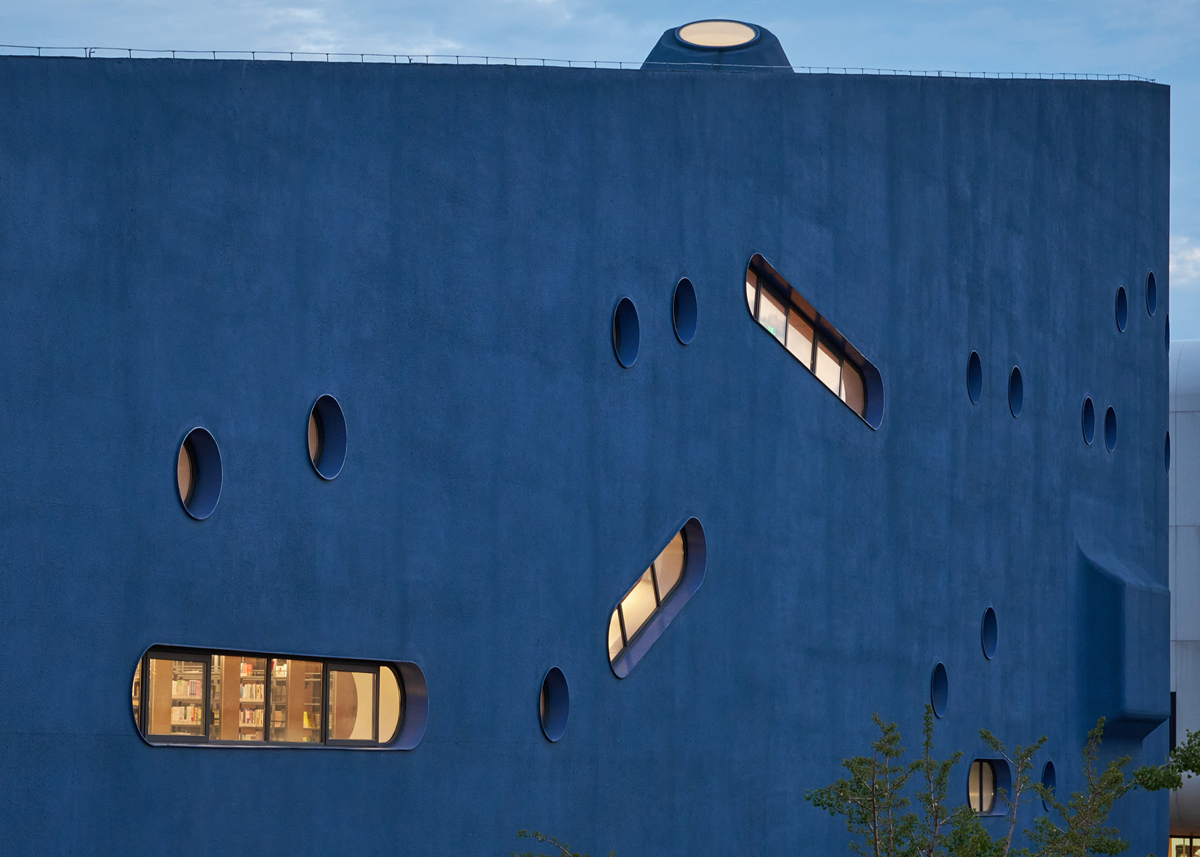 “The marriage of library and theatre,” says the firm, “came from the architects’ belief that the act of extensive reading and thinking, [plus] the act of expression through performances, should be critical components of education. The distinctive qualities of these two programs, and the respective physical needs, came to inspire the design of the building.” 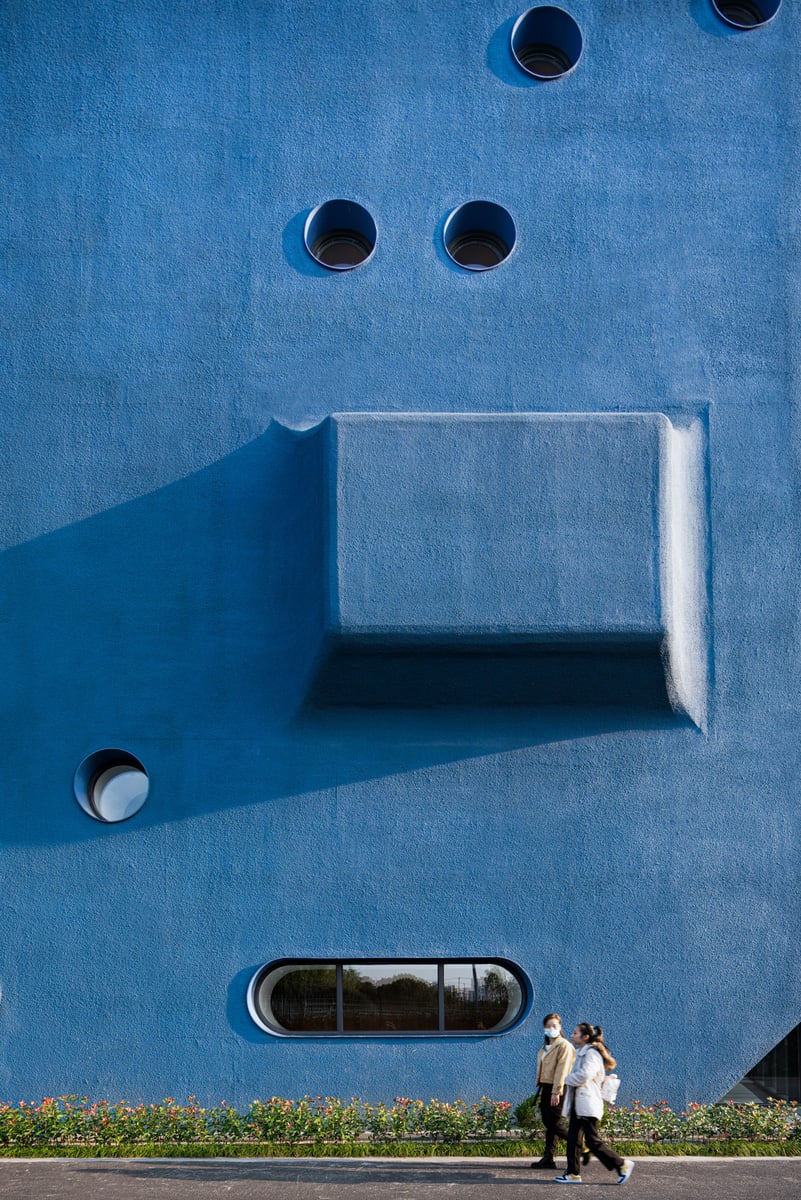 Externally, that means an eye-catching blue building envelope distinguished by a gaping mouth-like entrance and a slanted roof studded with protruding skylights, including an oculus resembling a spout. Many of the structure’s windows are round and evoke portholes, prompting some to liken the building to an ocean liner as well as a whale. The whole, in any case, creates “a strong impression for passersby.” And like those of both whales and seafaring vessels, the building’s activities extend above and below ground level. 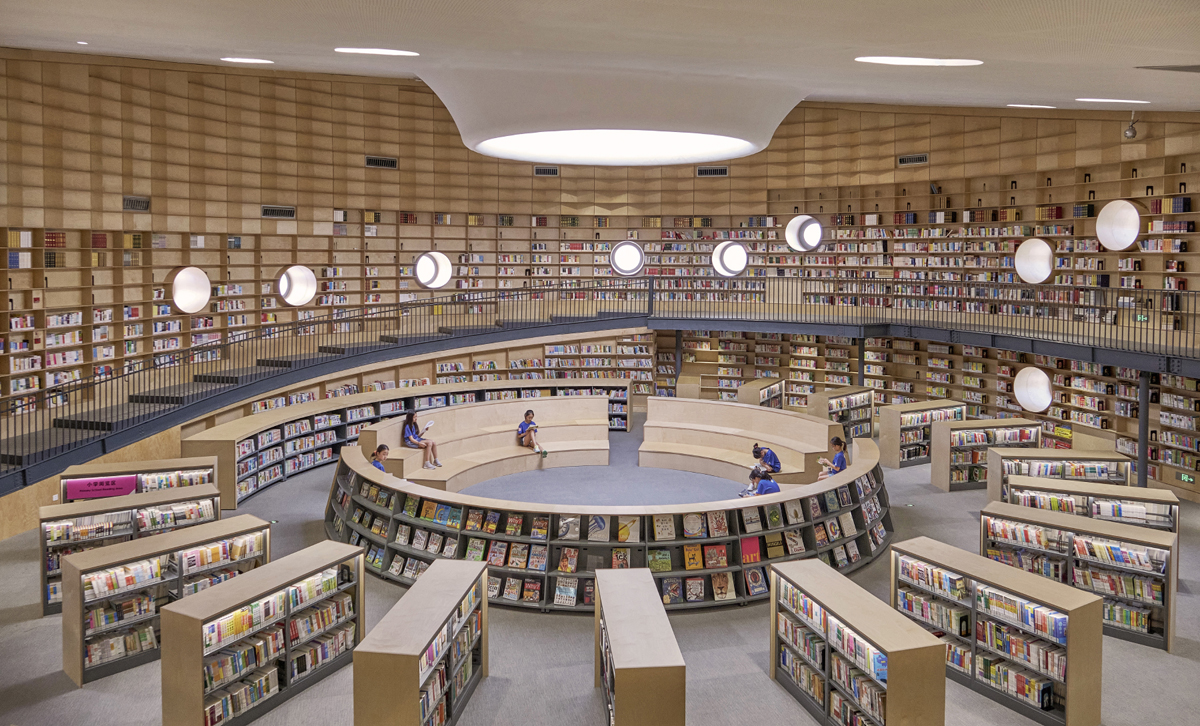 The proscenium theatre and the black box performance space, for instance, require the least amount of natural light plus acoustic isolation, so are located in the lower part and a deep central area of the building. The library, conversely, occupies the upper levels, where a loop of different reading spaces rises and drops according to the varying heights of the theatre volumes below. This terraced spatial sequence climaxes in a central reading area surrounded by books and light. 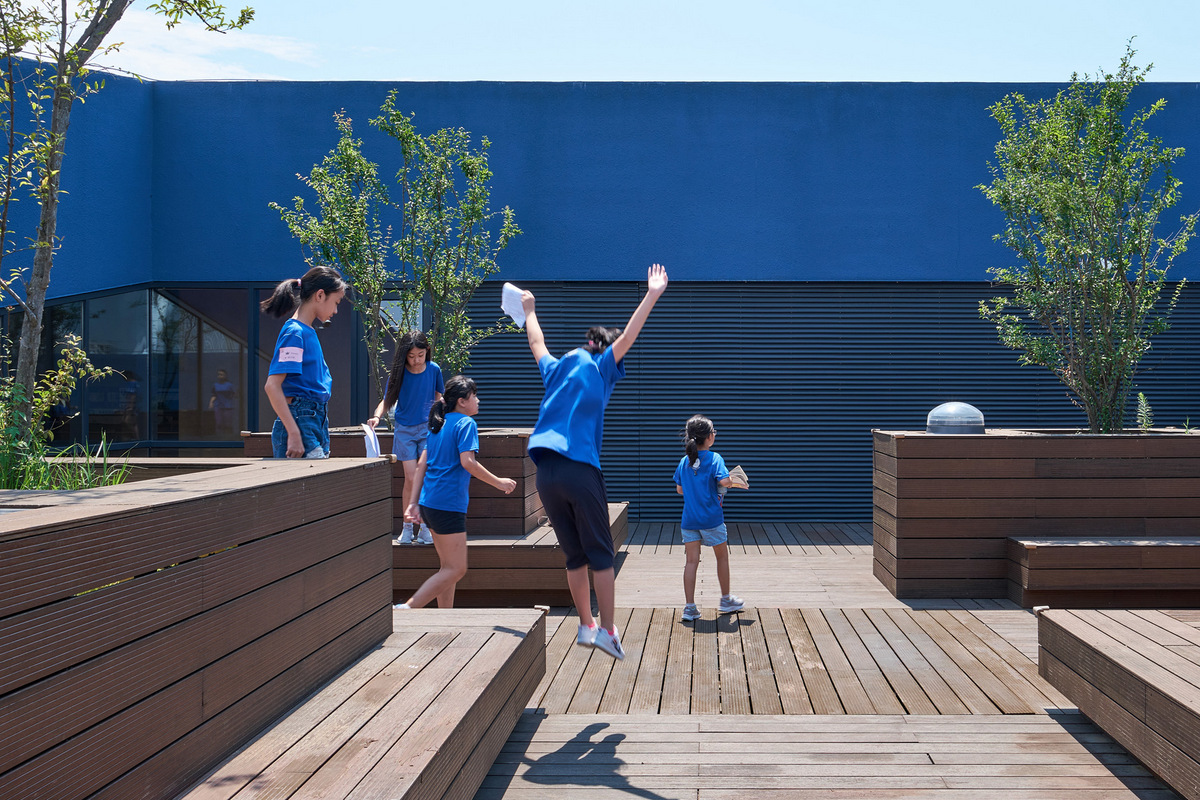 In addition to these various quiet zones, a sunken roof garden atop the building gives students access to fresh air and an outdoor reading area when the weather permits. 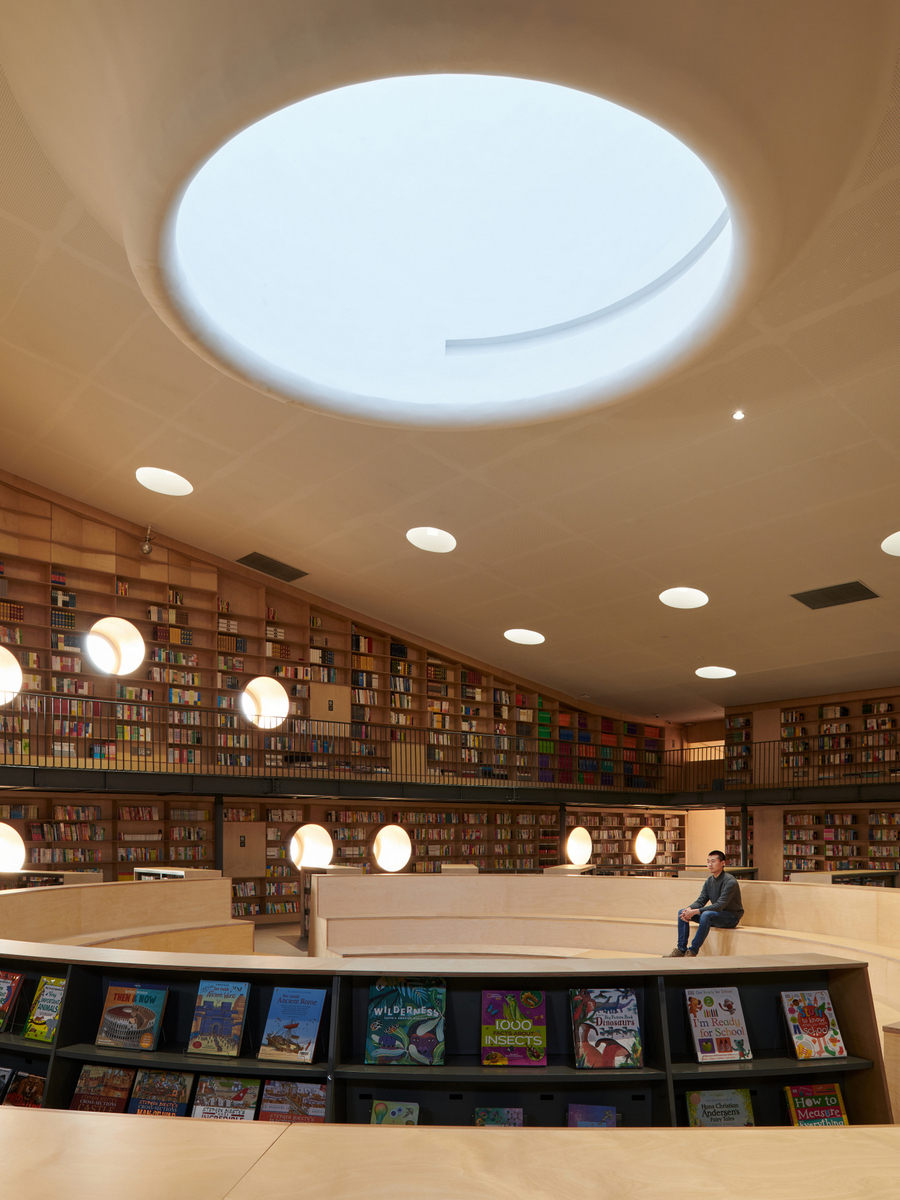 For all of its whimsy and charm, however, the Bibliotheater is devoted to serious learning, encompassing activities both solitary and extroverted. The oculus that augments the library’s otherwise filtered light, for example, drops down from the ceiling to illuminate the central reading space “in an almost spiritual way,” while the juxtaposition of warm wood panels and deep blue walls produces a stimulating tension where appropriate. 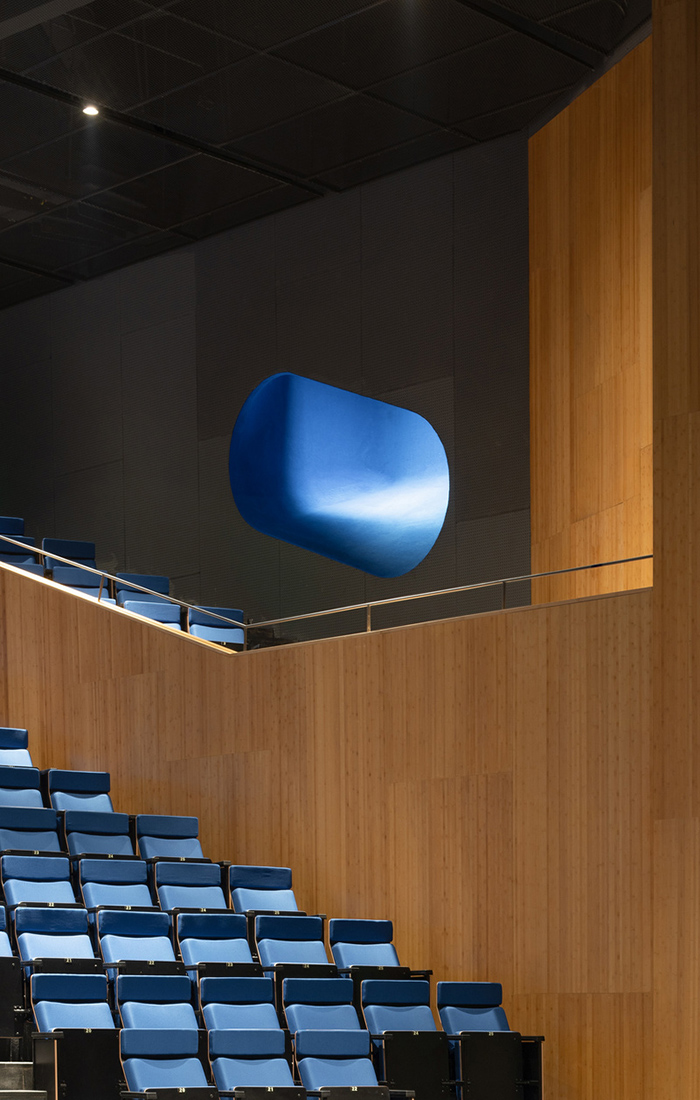 Within the performance spaces themselves, meanwhile, natural light has been extinguished altogether, with the artificial lighting carefully designed to meet the creative requirements of anyone using them.

“In a sense, the Bibilotheater was conceived of more broadly as a cultural centre for not only the school but also the surrounding communities,” says the team at OPEN. “Carefully placed near the secondary entrance of the campus, the building may be used independently without disturbing the campus management. It was the architects’ hope that the Bibliotheater will become [a] social energizer,” bringing together students and parents with the community at large.

The OPEN Architecture project, known by some as the Blue Whale, is a library, theatre venue and community hub in one.