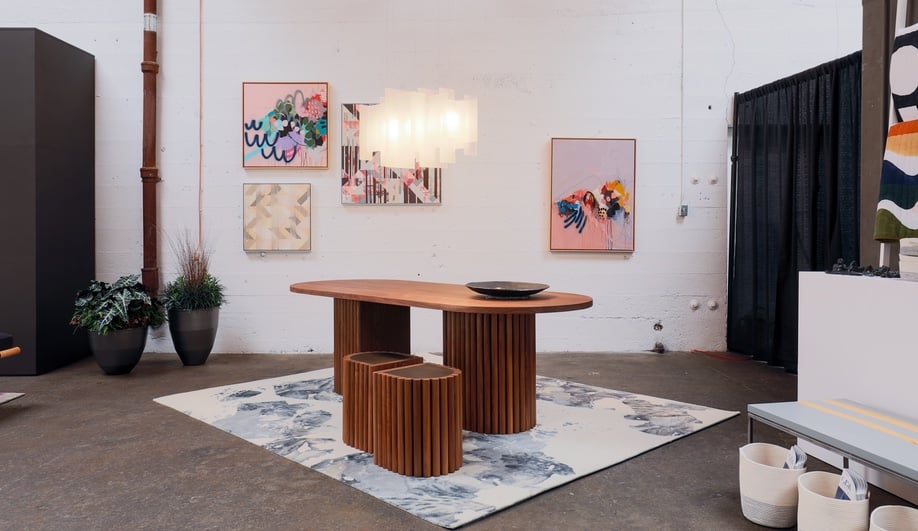 Well-crafted pieces made of honest materials – wood, metal and stone – abounded at Address Assembly, the annual showcase of where West Coast design-craft is at. Part-gallery, part-pop-up shop, and part-showroom, the event at the Settlement Building in the trendy Railtown District has been produced by Kate Duncan, a Vancouver-based furniture designer/maker (it’s curated by interior designer Amber Kingsnorth from Māk Interiors) since 2014. Duncan’s own work was the most impressive. She debuted a handsome bed and a hefty table with stools that played with the depth of wood – thick cylindrical dowels clad the surfaces in an ornamental yet restrained way.

“My last collection was inspired by the craft of woodworking. I focused on traditional joinery and a modern, minimal aesthetic leaning in to mid-century modern design and Japanese influences,” Duncan says. “In this newer body of work I wanted to lean into craft in general, not just woodwork. I looked at sculpture, ceramics, architecture (specifically, the Brutalist Movement and Le Corbusier’s work), lighting and even textiles to inform my aesthetic approach while still remaining true to the craft of woodwork from a manufacturing perspective with the use of tabor and dovetails throughout.”

Here is a look at her work and that of her contemporaries. 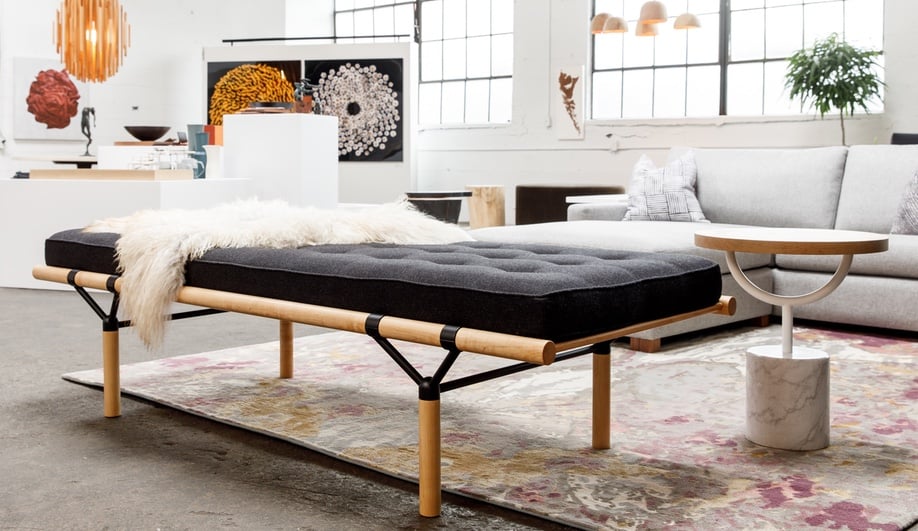 One of our favourite new designers was Will Morrison, who launched his minimal Split Collar daybed and Stratum table. The metal joinery on the daybed literally elevates the piece, whose dowel legs are complemented by the table’s base. 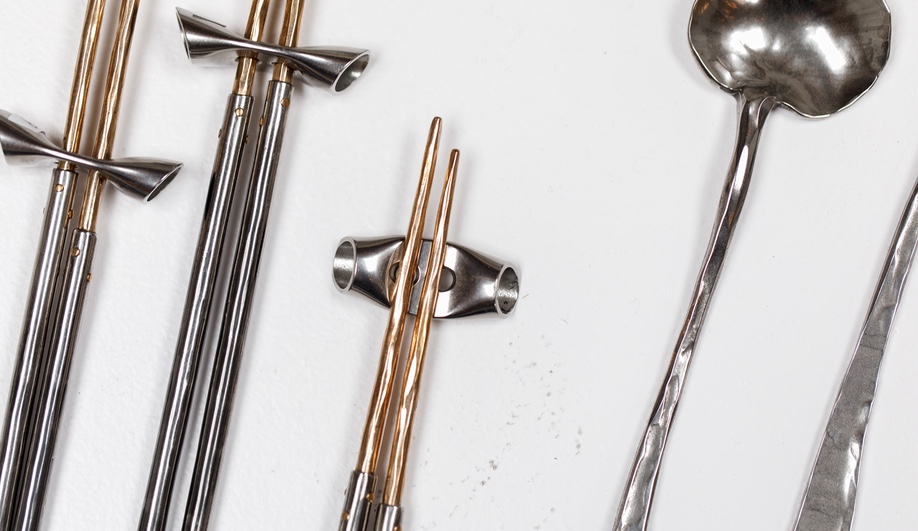 Stefanie Dueck is a Vancouver-based metal artist specializing in hand-forged flatware – including chopsticks that feel like instant heirlooms – custom hardware, and sculpture. The imperfections are what make her pieces a stand out. 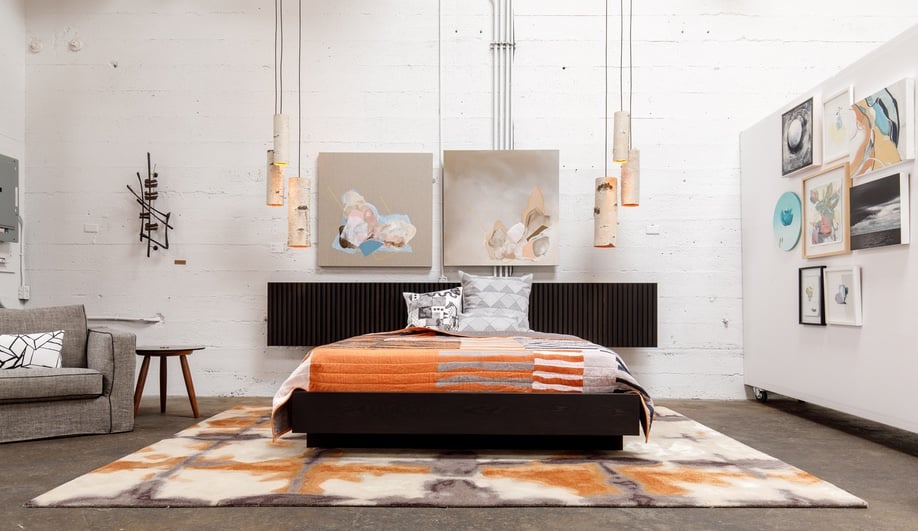 The headrest on Duncan’s bed (above) and the table base and stools (below) are clad in wood dowels. The pieces feel at once important and ornamental. 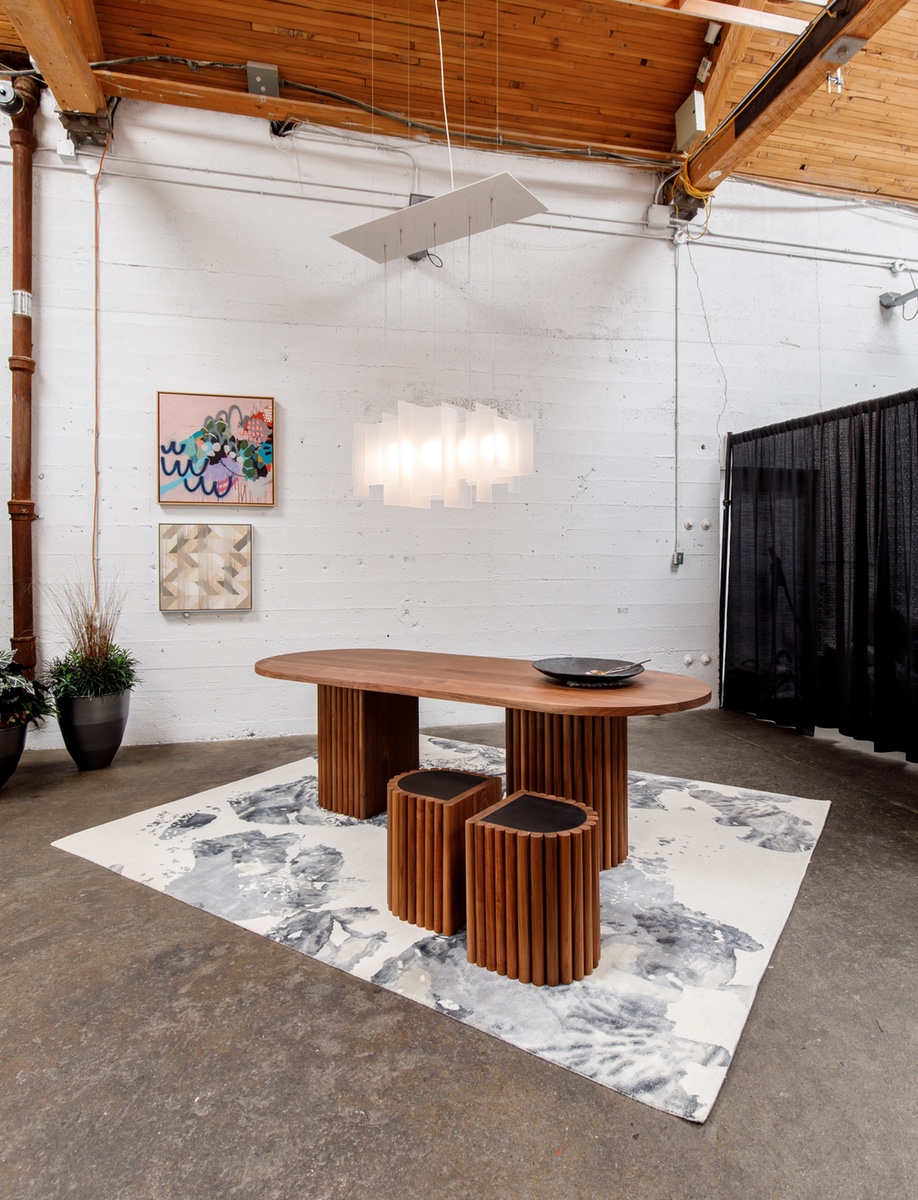 Brent Comber also showed off new work, including his Pesuta chair (below, far right), inspired by a ship wreck off the coast of Haida Gwaii – its angular form mimicking the ship’s wooden body, as it juts from its final resting place in the sand – and the Flow Side table, with its ripple glass top and basalt base. 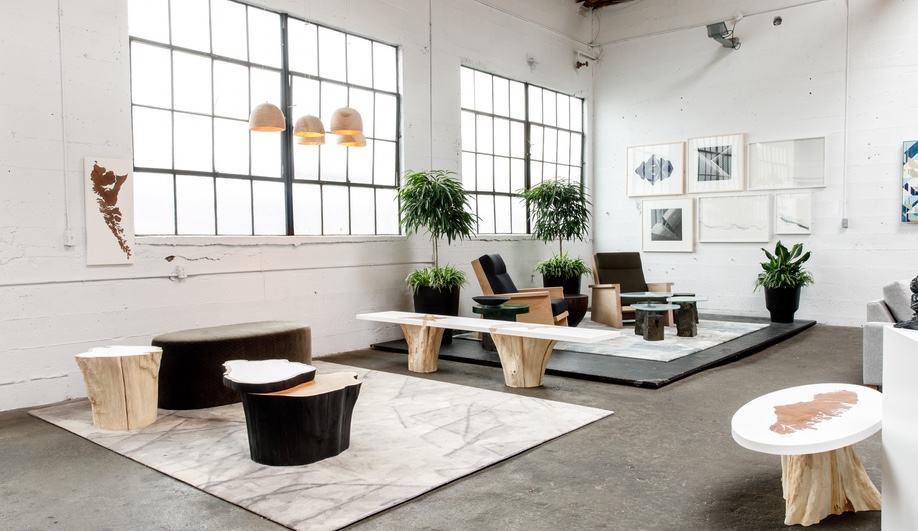 A detail of the tops of the Flow Side table, which resemble iced-over glass. 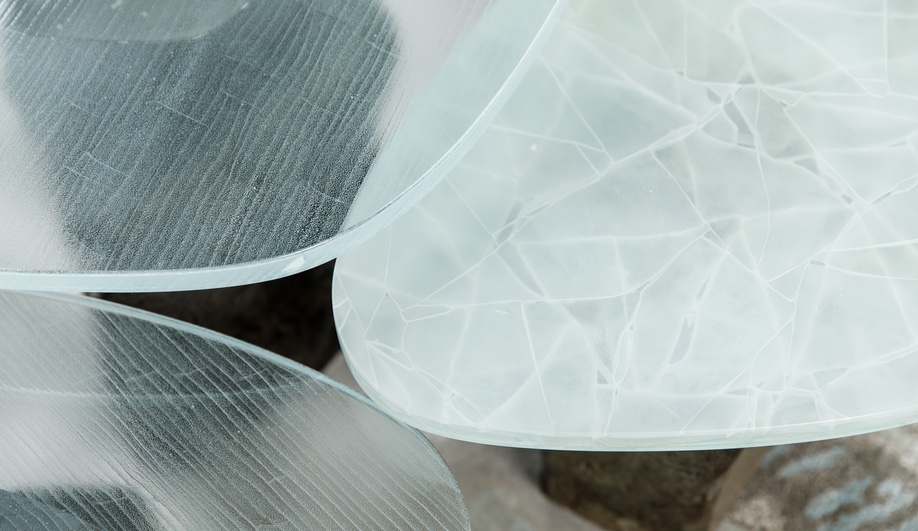 Another familiar name, Propeller Design, strung up its Turn lights, made of oak harvested from downed Vancouver street trees. The lighting studio had a number of other fixtures on display, both at IDS Vancouver and at Address Assembly, but these were notable for their rough-hewn exterior and warm inner glow. 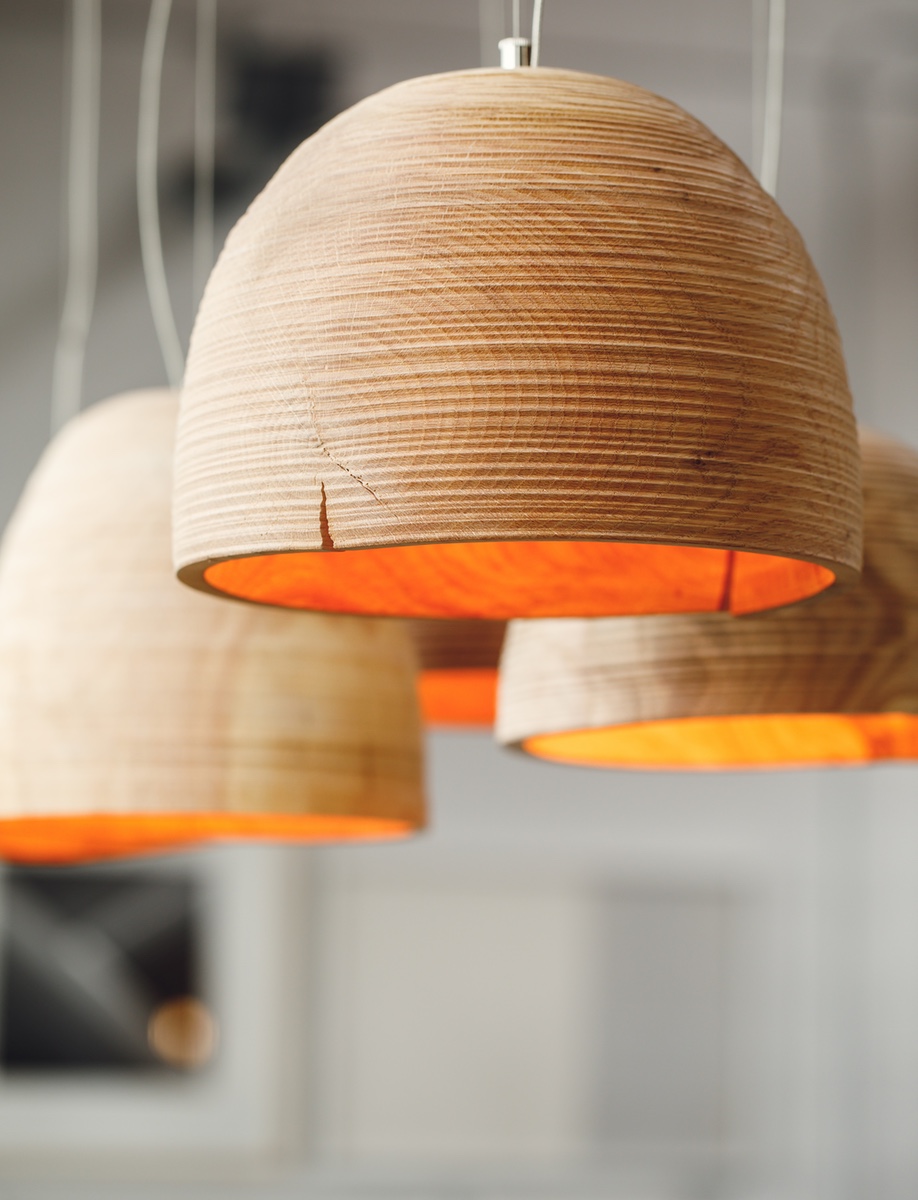 Nicholas Purcell showed off the Finn series of bronze pieces, which were incredibly heavy and seemed destined for a sophisticated hotel lobby. 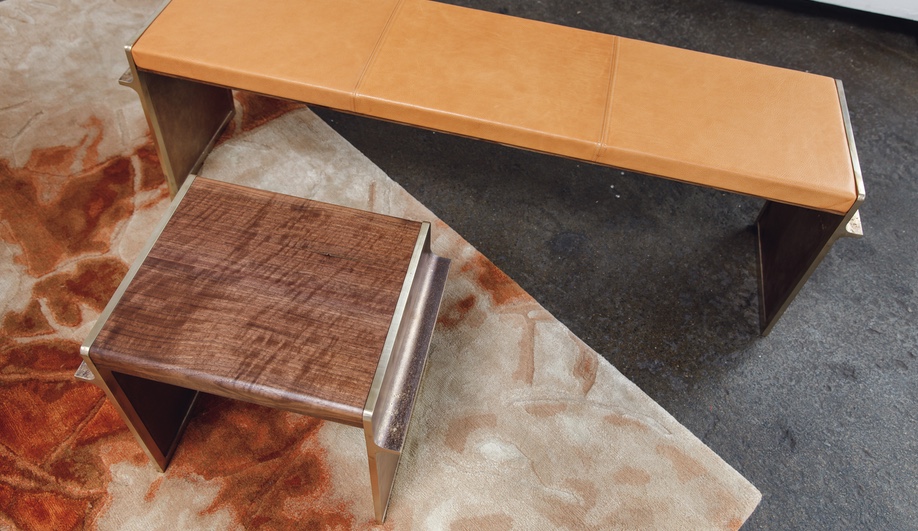