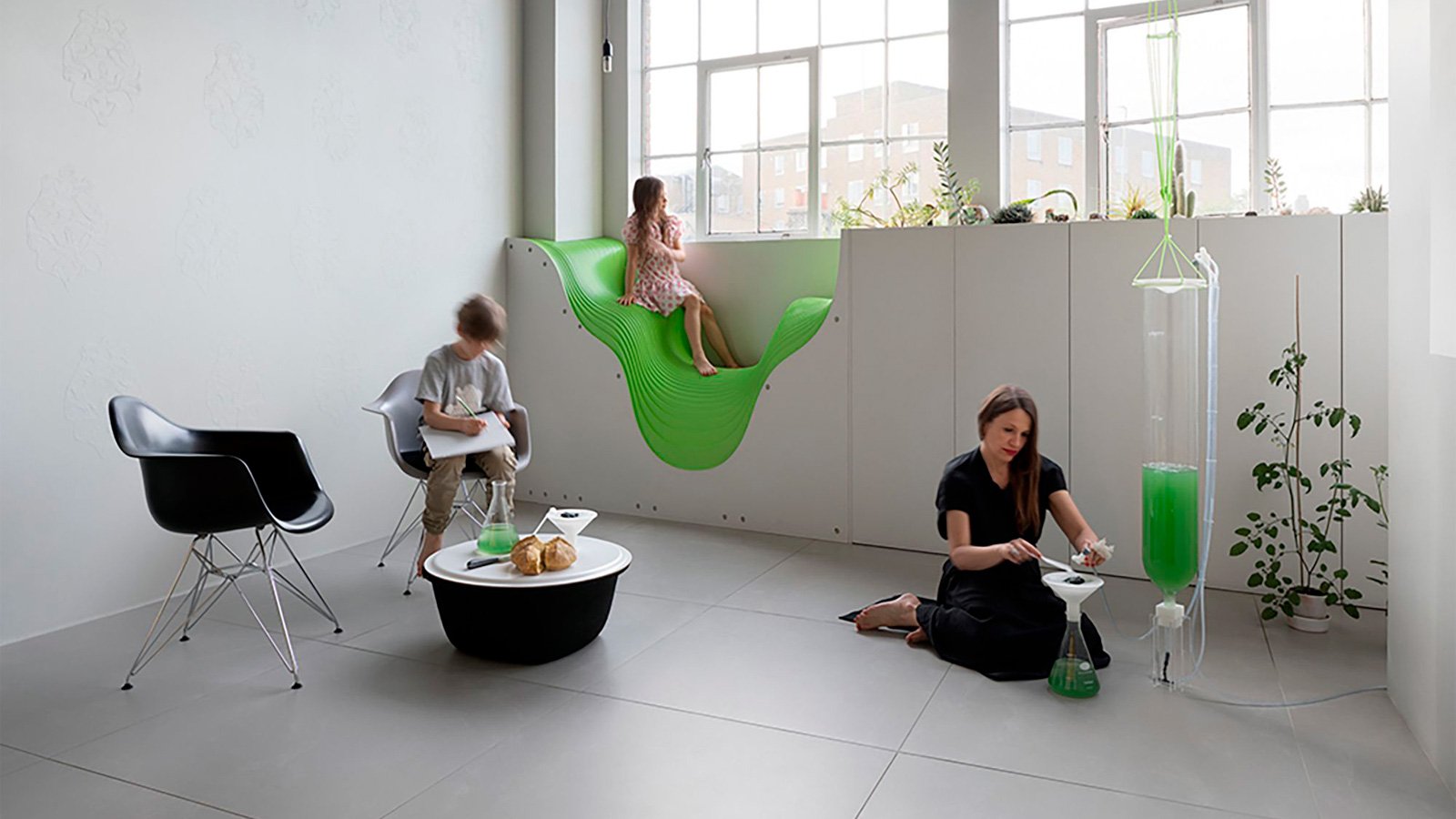 Called BioBombola, the easy-to-assemble photobioreactor produces as much oxygen as seven house plants — not to mention delicious seaweed.

The family that grows together…grows closer together? That’s the guiding spirit behind a pioneering indoor algae garden developed by a pair of U.K.-based architects who cultivated the air-filtering project with the input of their two young children.

During London’s recent COVID-19 lockdown, Claudia Pasquero and Marco Poletto of the architecture and urban design firm ecoLogicStudio cycled daily with their offspring, Giacomo and Lulu, between their home in Broadway Market and the studio’s bio-lab in the East End. Over those weeks, the kids spontaneously became involved in the couple’s seaweed research, helping to grow the algae (aka Spirulina) and collecting data on air pollution. Their experiment, which Pasquero and Poletto have evolved into a DIY garden kit that any household can adapt, proved how effective Spirulina can be for improving indoor air quality. The algae also happened to be delicious. 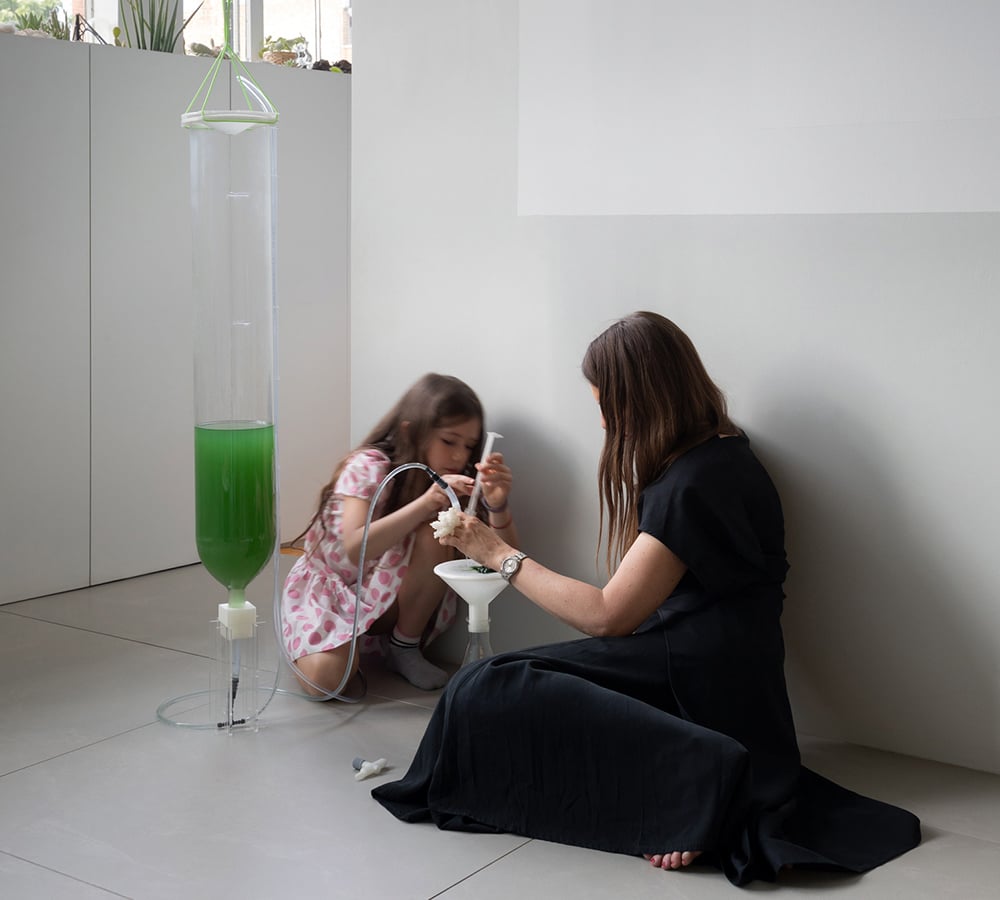 “The kids love harvesting Spirulina,” says Pasquero. “We make vegetable protein bread every week with it now. Spirulina has quite a sharp taste, somewhere between grass and nuts.” 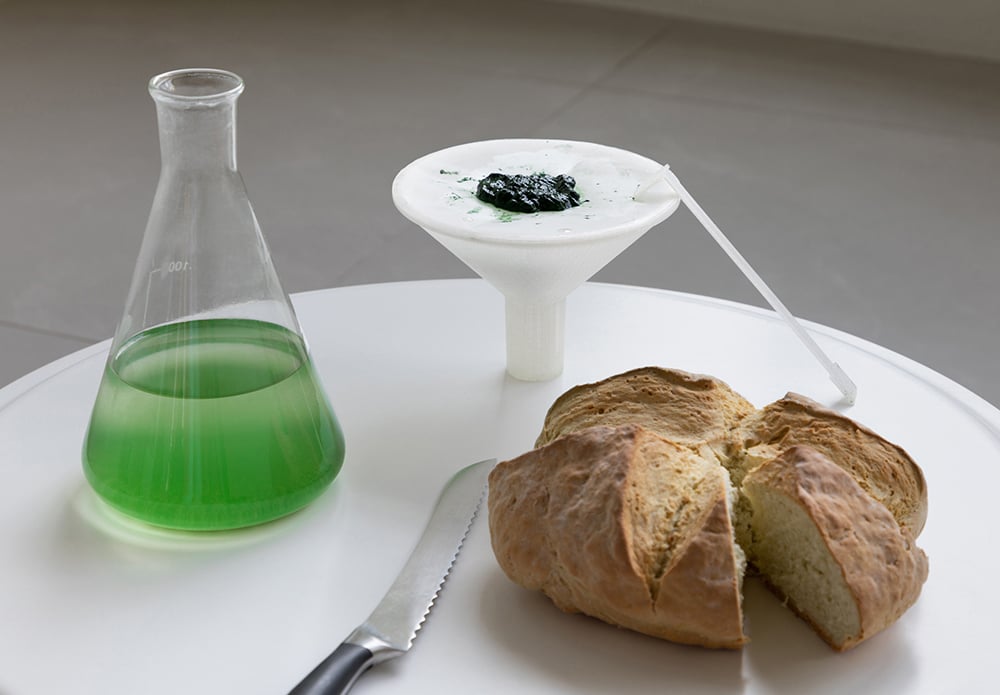 The centrepiece of their at-home growing kit, which includes a nutrients bag and a starter batch of Spirulina cells, is a photobioreactor called the BioBombola. Standing a metre tall, this lab-grade glass container (bombola means “cylinder” or “bottle” in Italian) can accommodate up to 15 litres of living blue-green algae (plus a culture medium with nutrients). It also includes an air piping system and a small air pump that constantly stirs the medium. The gentle bubbling fostered by this system keeps the algae afloat, aids oxygenation and produces a calming sound. 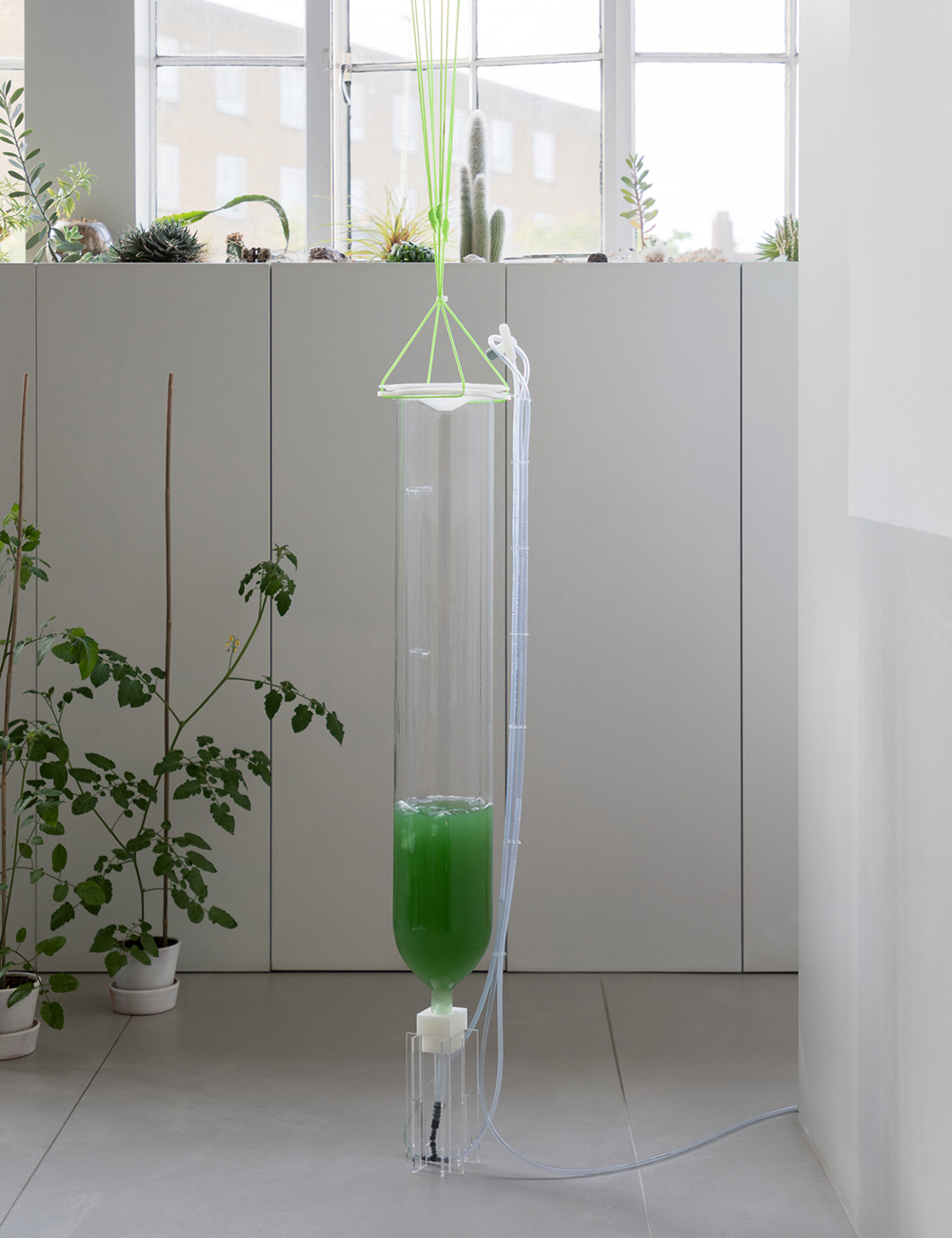 Harvesting the algae, as the Pasquero-Poletto clan discovered, is a “simple” yet “entertaining” process, involving its collection on a de facto serving dish atop a separate beaker-like vessel several times a week. Easy to assemble and dismantle (it just needs to be positioned in direct sunlight or next to a grow lamp), the BioBombola yields up to seven grams — or one tablespoon — of Spirulina a day, which is the daily recommended intake for a family of four. Besides producing the same amount of oxygen as seven indoor plants, the photobioreactor also absorbs as much carbon dioxide as two young trees.

“If we, collectively, transform air pollutants into highly nutritious aliment, there will be fewer opportunities for viruses to exploit unsustainable food supply chains and for polluted atmospheres to reach and attach to us,” say the designers, their memories of the BioBombola’s lockdown evolution still fresh in their minds. 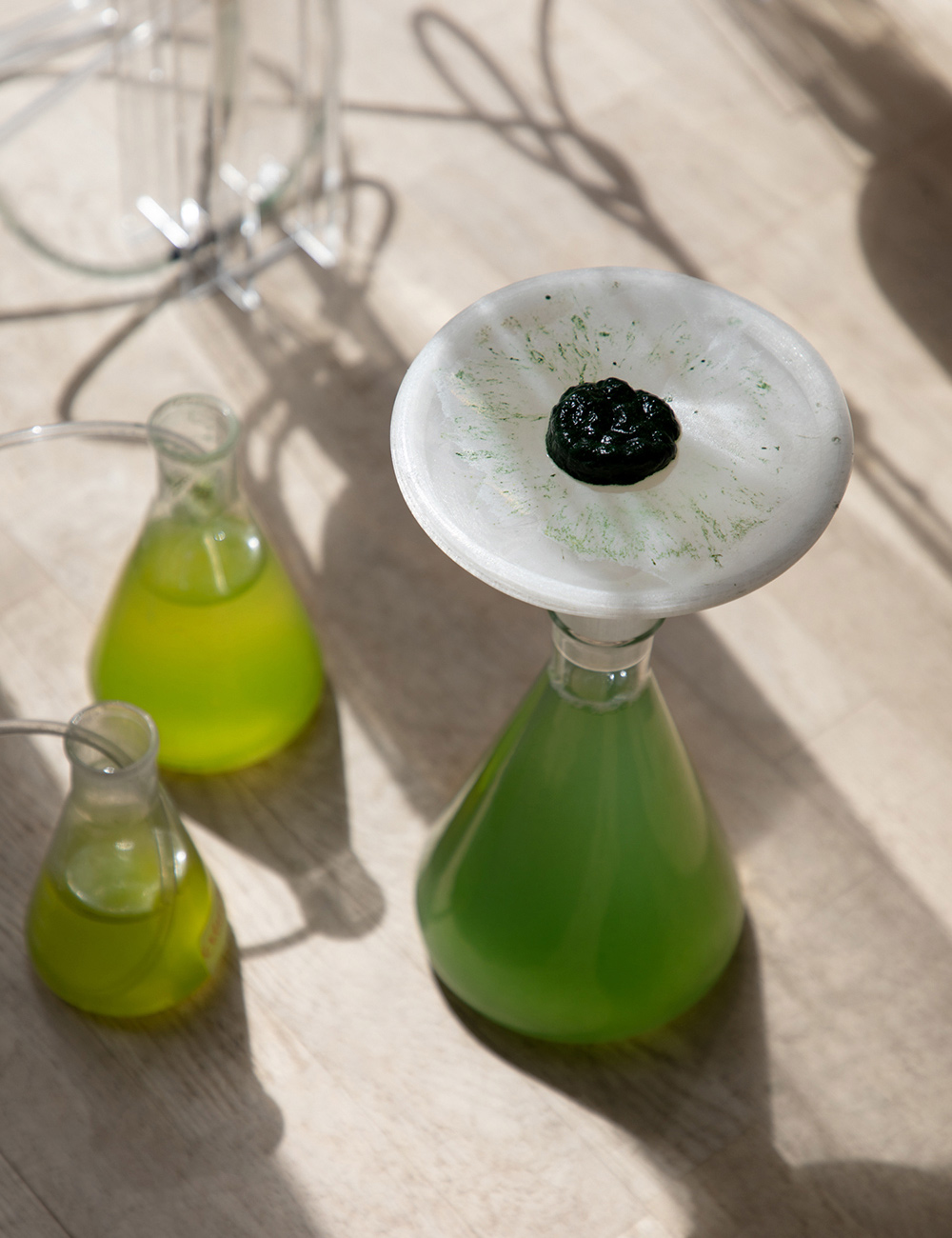 Indeed, the photobioreactor is but one of ecoLogicStudio’s ongoing efforts “to introduce high-tech cultivation into the urban context by encouraging direct interaction with city dwellers’ everyday lives.” Their BioBombola is part of Photo.Synth.Etica, a two-year-old research program developed by the firm with the Urban Morphogenesis Lab BPRO of The Bartlett UCL and the Synthetic Landscape Lab of the University of Innsbruck, two schools the designers are affiliated with as researchers and instructors.

In a recent collaboration with the United Nations Development Program, ecoLogicStudio has been testing the potential of AI to develop Deep Green, a new green planning interface. That team is also working on a Photo.Synth.Etica curtain for post-pandemic use in retail and commercial spaces. 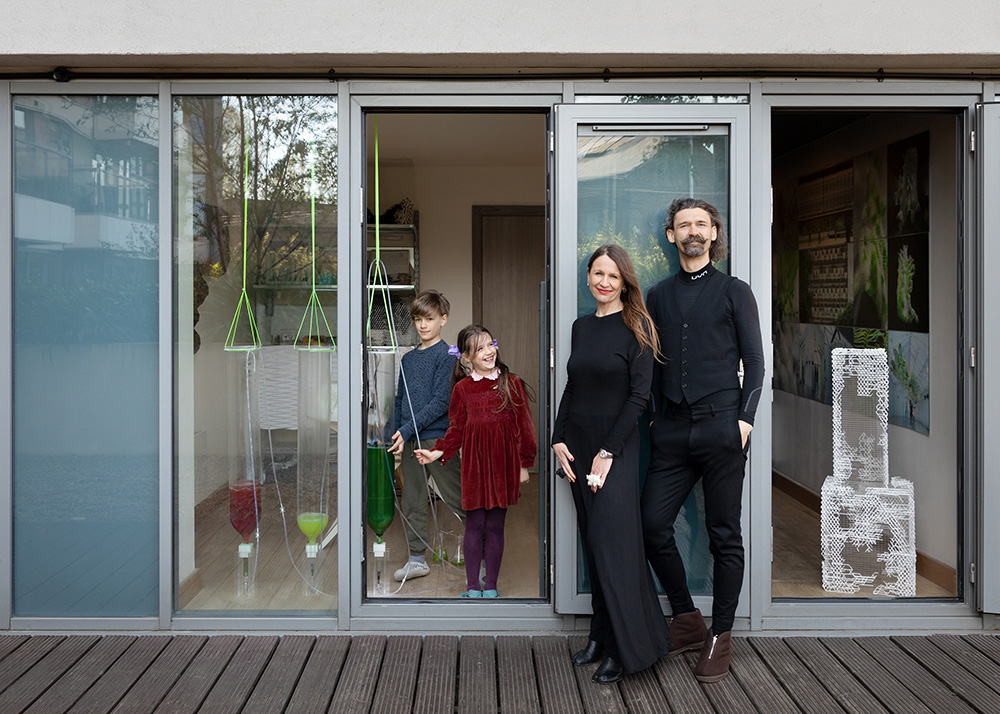 The BioBombola, however, is among Pasquero and Poletto’s most accessible — and personal — projects to date. “We believe that this product will contribute to re-designing some of the logic that led us to the current health crisis,” enthuse the architects.

The kids, as they say, are already onboard.

Called BioBombola, the easy-to-assemble photobioreactor produces as much oxygen as seven house plants — not to mention delicious seaweed.