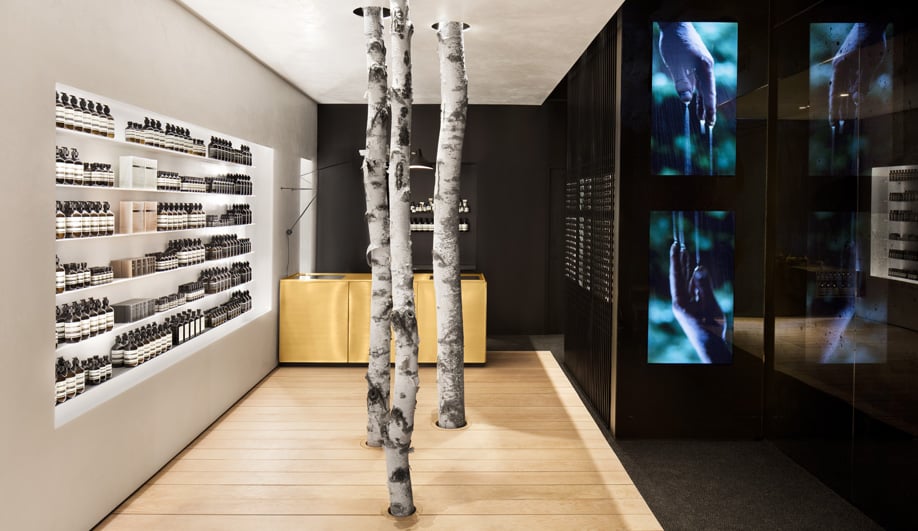 With a string of beautiful retail spaces recently opened – including this one in Toronto – Aesop has proven itself time and again a design-forward company. The Australian brand, which has been around since 1987, is taking its botanical skin, hair and body products worldwide with stores that translate the local culture into modern spaces, connecting the dots between the consumer and the street-side aesthetic. Each new retail store reflects the area in which it is located, yet maintains the cool, reserved persona of Aesop and its laboratory-like packaging. 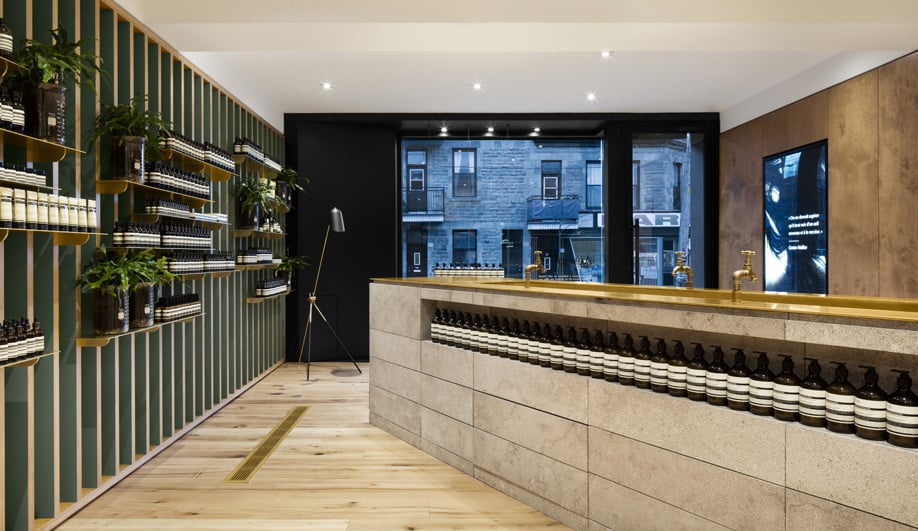 For its two Montreal spaces, one in the city’s vibrant and eclectic Mile End neighbourhood, the other in picturesque and up-market Westmount, the company hired two local architects. In Mile End, Naturehumaine, led by Stéphane Rasselet, used Quebec limestone to clad a long, imposing sink that, set diagonally, ignites the space with a sense of movement.

The firm is known for using natural materials in its innovative retail and residential projects that often break convention (take, for example, its In Suspension House). Here, that viewpoint unfolds as thin plywood sheets, open-stud walls, with the studs painted grey on one side and a calming green on the other. Thin brass shelving iterates the line’s polished vibe and beautifully recedes to give the products top billing. It’s a uniquely comfortable mix of humble and luxurious materials, a feeling that likely allows shoppers to browse uninhibited. 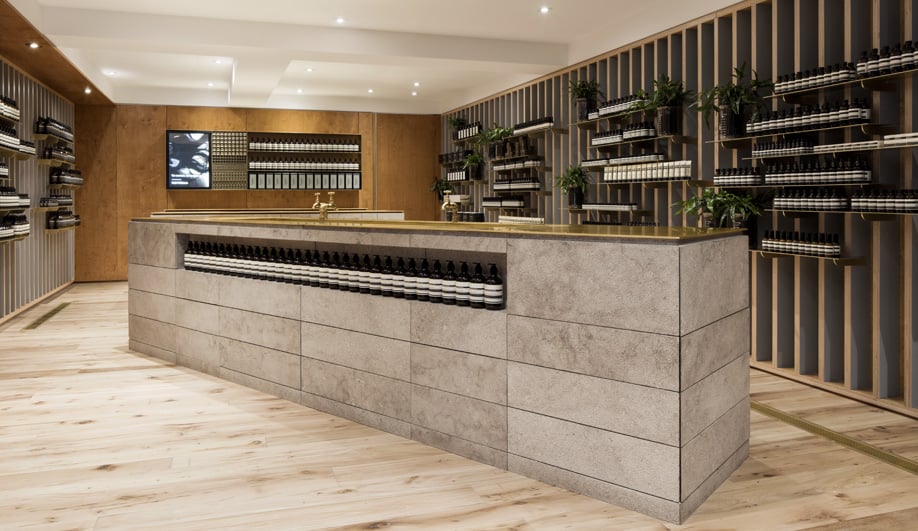 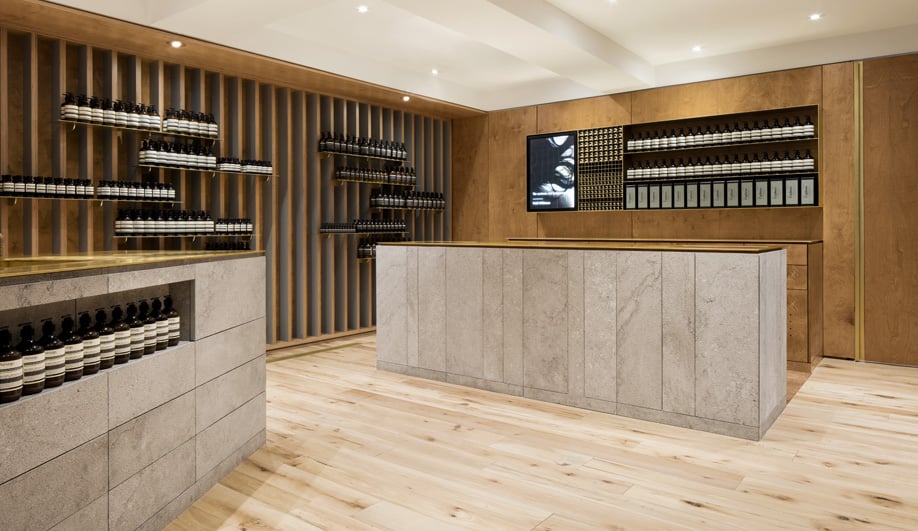 The company’s other foray into the Montreal market is by Alain Carle, a local architect known for inventive, site-specific residential projects, often with bold, graphic lines (like this home in Wentworth-Nord, Quebec, that won a 2014 AZ Award of Merit).

Here, Carle has layered in representations of water, using art and literature as inspiration. An installation by artist Pascal Grandmaison incites the ritual of cleansing, while three sculptural birch trees stand in the centre of the room — gestures that impart the importance of both culture and nature. A wall of black glass mirror visually doubles the size of the space with a room-sized reflection of eye-pleasing white stucco, black walls, great swaths of brass, and a “floating” wood platform floor. 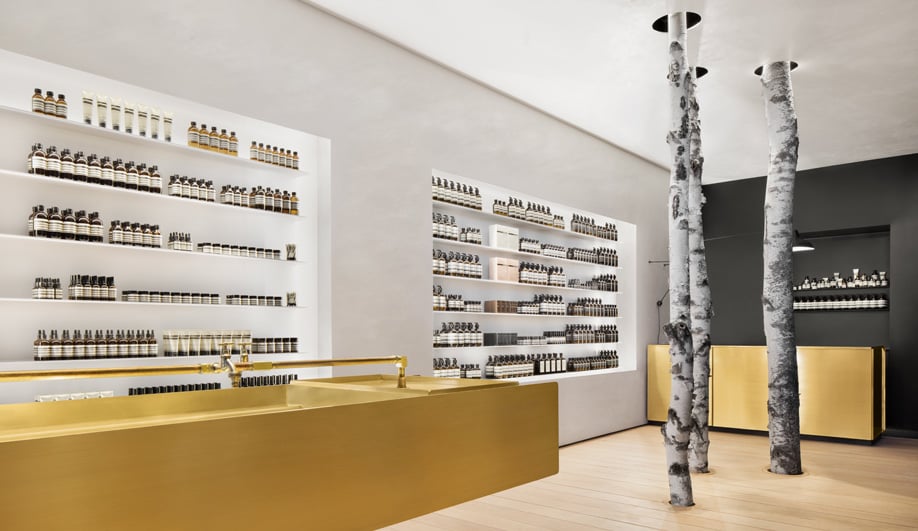 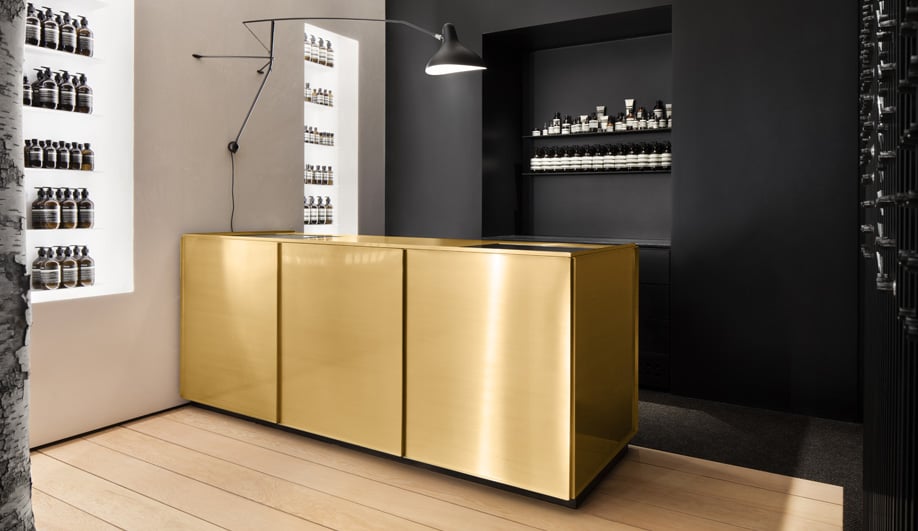