Masterworks: Amanda Levete and the Museum of Art, Architecture and Technology
Amanda Levete has built a sublime masterpiece on the shores of the Tagus River - one that’s set to turn Lisbon into Europe’s hottest tourist destination for contemporary art and design. 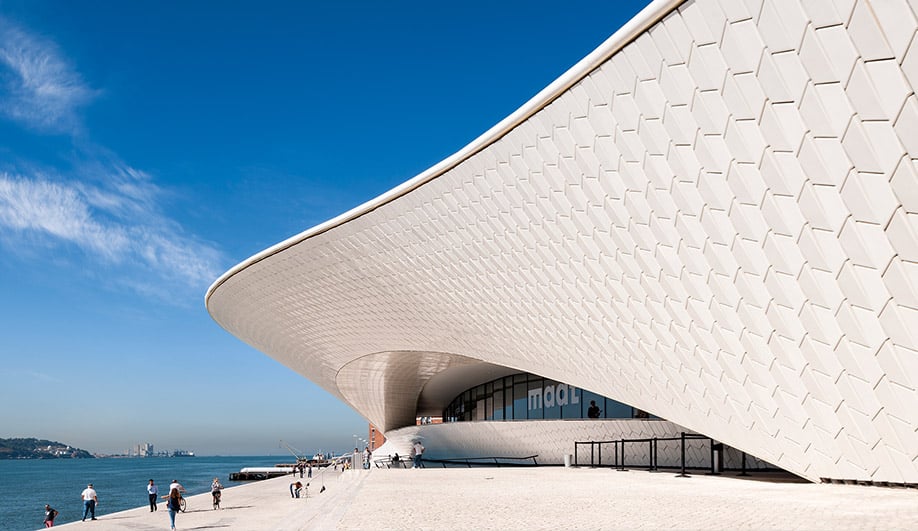 The all-white facade is made up of 15,000 crackle-glazed, three-dimensional tiles that catch the Iberian light. 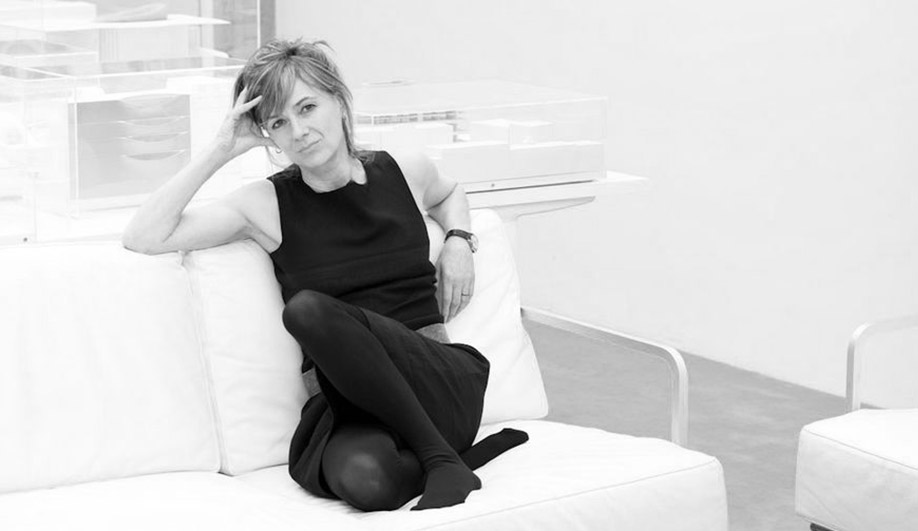 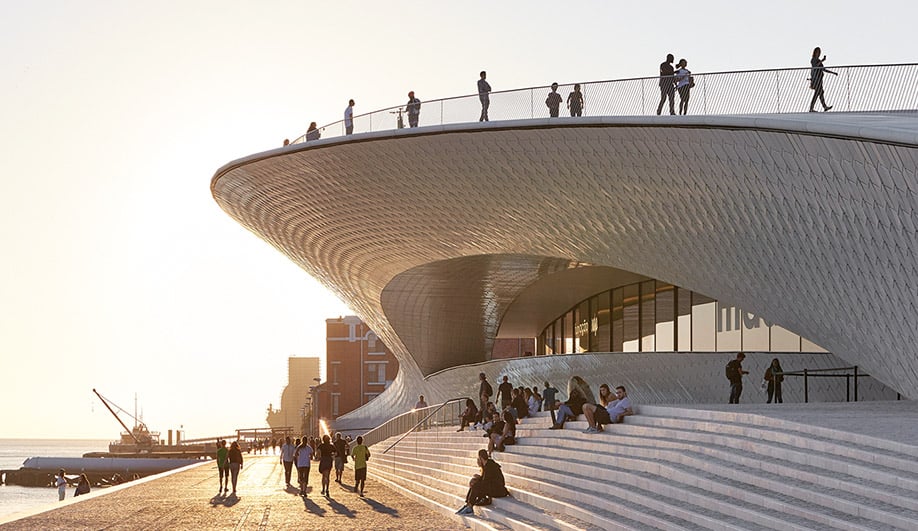 A view of the entrance from the river’s edge. 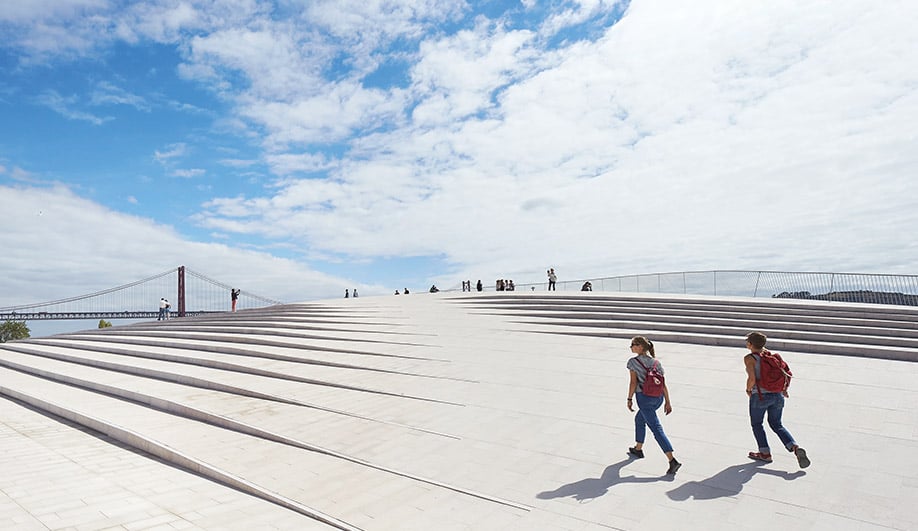 The sloping rooftop rises 12.4 metres and is a destination in its own right. 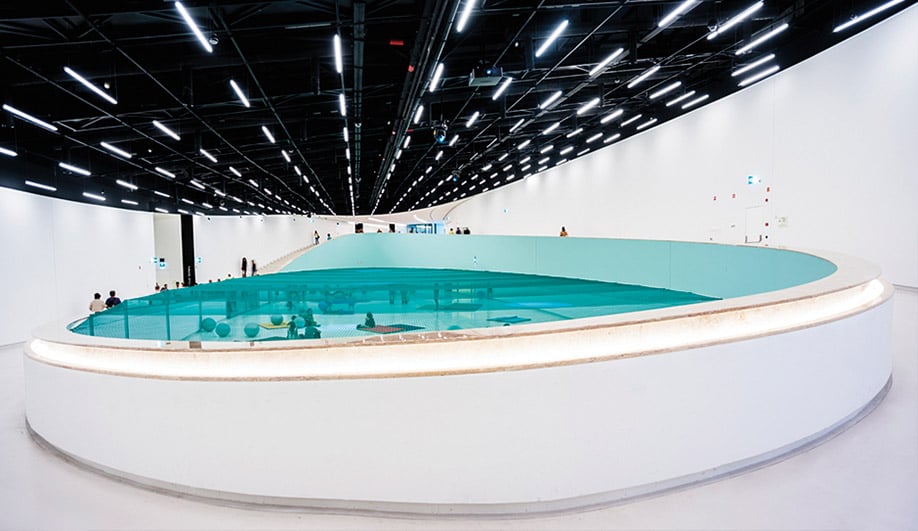 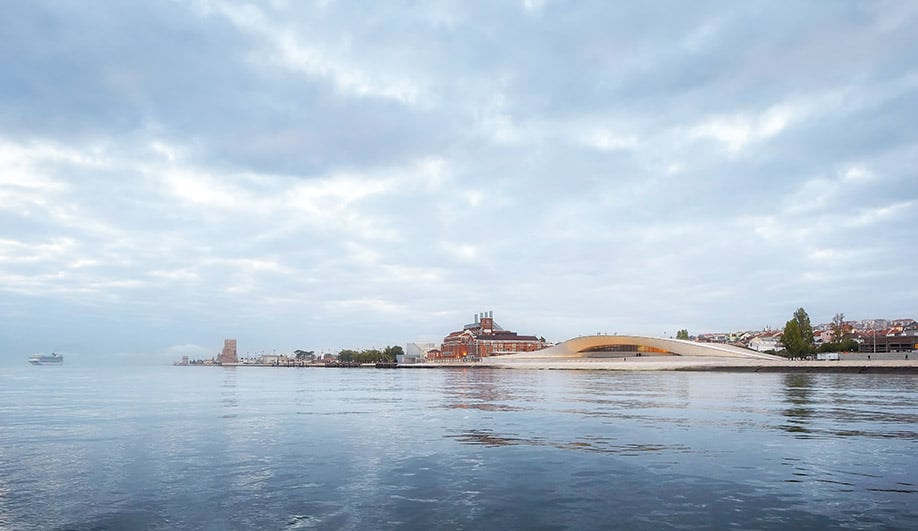 When it is finally complete in March, the Museum of Art, Architecture and Technology in Lisbon will include a park by Lebanese landscape architect Vladimir Djurovic as well as a restaurant and shop.

Amanda Levete has built a sublime masterpiece on the shores of the Tagus River – one that’s set to turn Lisbon into Europe’s hottest tourist destination for contemporary art and design.

Even on a clear day, cruising along Lisbon’s Tagus River, it would be easy to miss the Museum of Art, Architecture and Technology. With the same humpbacked profile as a stingray, the sleek museum, known simply as MAAT, spreads out along a generous boardwalk. Covered in three-dimensional ceramic tiles that soak up the Iberian light, the low-lying form changes appearance from minute to minute like a chameleon. Whether approached by land or water, the structure is both ominous and sublime.

Already wildly popular with locals, MAAT is fated to become a major tourist destination in a city that attracts nearly seven million visitors annually. It is also a significant project for the firm that designed it: AL_A of London, headed by Amanda Levete. Since launching in 2009, the studio has built up an impressive C.V. that runs the gamut, from mega-projects that have taken years to complete, to ultra-modest endeavours. The Central Embassy in Bangkok, for instance, is a shopping complex opened in 2014 that will have a 36-storey hotel attached to it later this year. By contrast, a few years ago, just for fun, Levete and her team designed a pop-up restaurant called Tincan that featured nothing but canned seafood.

An expansive boulevard along the Tagus River leads to the MAATu2019s crescent-shaped entrance. Leveteu2019s design allows people to walk in, through and on top of the building.

Beyond its swooping profile, the Lisbon project stands out for its visionary ambition. Labelled a kunsthalle, MAAT will dedicate ample space to site-specific installations in disciplines ranging from architecture to science to new media. Opening in March, phase two includes a park by Vladimir Djurovic Landscape Architecture and an elegant pedestrian bridge, by AL_A, that lands on the museum’s roof, uniting the building and the waterfront with the city.

Just weeks after the museum’s opening, I met up with Levete at her studio, housed in a former depot in north London. While many architecture offices are filled with black-clad staffers staring intently at screens, Levete’s is vast, white and airy. But what most sets it apart is the pile of shoes at reception. Often photographed barefoot and seated in a semi-cross-legged position, Levete is famous for her no-shoes policy. “I think it sends a powerful message,” she says of her preference for only bare feet. “It says something about who we are – you see this messy pile of shoes and you see the individuality of people, and it gives a sense of a common endeavour. You leave behind your preconceptions and start to work.”

It’s hard to disagree with the metaphor. It’s also an effective way to describe the grander story of Levete in charge of a 50-person team. Too big to be a family, but small enough for her to know everyone by name.

Her career began in the 1980s with a stint at Richard Rogers’s office. After that, she joined Future Systems, a studio (at that time run by the late Jan Kaplický) that made its mark with the opening of a media centre at Lord’s Cricket Ground in London. The all-aluminum structure became a symbol of the late 1990s, when Britpop was in full swing. Kaplický, whom Levete later married, was a different kind of creative thinker. While he loved to conceptualize projects, she was good at building them. “For me, a project’s realization is part of the thrill,” Levete says. “Your vision has to be plastic, because if you start with an idea that can’t be changed, you will fail. Therein lies the compromise.”

The goal was to create something totally different: a building that attracts tourists and reconnects the city to the river.

The commission to design MAAT came in 2011, directly from António Mexia, chief executive officer of Portuguese energy giant EDP (whose philanthropic EDP Foundation owns the museum). Mexia and Levete collaborated on both the architecture and the concept. Physically, the 7,400-square-metre building is intended to be a vital link between the city and the water. Like many port cities, Lisbon ignored its coastal connections for decades. But it has recently begun to see the waterfront’s cultural and economic potential and added such people-friendly touches as bike paths and bridges. The MAAT’s roof, which rises 12.4 metres at its highest point and doubles as a piazza, is a destination in its own right. A stepped grade leads to an idyllic lookout, with the water in one direction and the city in the other.

The subterranean galleries are characteristically all-white, from floor to ceiling.

“Reconciling the degree of separation [between water and land] became the most important driver,” Levete says. “It’s what shapes the building. It was very counterintuitive to put the galleries below the water table.” Yet, when one enters the interior, the river-city connection is almost lost. Visitors are led down a ramp that loops around the central exhibition space and into a series of subterranean rooms that have a uniform look of polished white floors and curving walls. Natural light, which is integral to the exterior’s appearance, is channelled into only one of the galleries through a single skylight. The space feels like a world of its own. The effect isn’t disappointing, though. Without much contact with the outside, attention is focused on the art.

Visitors enter the elliptical central gallery via a ramp. Standing in the space is an experience in itself, and it will no doubt be a challenge for artists to negotiate the gallery’s scale and oval form. For the inaugural exhibit, French artist Dominique Gonzalez-Foerster suspended green mesh across the entire 1,000-square-metre expanse and scattered exercise balls and rectangular mats across the floor. The installation, titled Pynchon Park, is described ominously as “an enclosure where aliens would be able to observe human behaviour in optimal conditions.” Inside the gym-like space, most visitors were comfortable taking a break, resting alone or in small groups across the mats.

The rooftop doubles as a piazza at the wateru2019s edge.

The people of Lisbon are already chuffed with their new cultural hub; its curved rooftop is continually occupied with strollers, joggers and dog-walkers alike. If success can be measured in Instagram posts, then Levete’s Portuguese clients must be very happy. Yet Levete is slightly wary of her building’s hashtag popularity. “I think the consequence is that it makes us more superficial,” she says. “One-liners take on greater importance above any deeper examination. It’s a problem, where you can’t actually see the work behind it.” Levete’s main objective might have been to reawaken a neglected shoreline; what she ended up making in the process is a building that suits our image culture to a tee.

SHARE
Twitter, Facebook, LinkedIn, Pinterest, Email
TAGS
Architecture, Cultural,
AZURE is an independent magazine working to bring you the best in design, architecture and interiors. We rely on advertising revenue to support the creative content on our site. Please consider whitelisting our site in your settings, or pausing your adblocker while stopping by.