An Amsterdam Office Meets the Harbour with Quiet Drama

East of the city’s historic centre, the industrial vestiges of a century-old Amsterdam wharf are gradually giving way to a new milieu of intimately scaled urban neighbourhoods. At the confluence of two eras, Amvest’s new office stands out – literally – as a harbinger of a city in the making.

Cantilevered over the water’s edge, the glass and steel office sits above the harbour. Designed by Rietveld Architects, the structurally daring building is immediately defined by a floating horizontal volume that’s seemingly held aloft by a glass elevator shaft. It’s a commanding presence.

While Amvest’s suspended offices draw the eye, the cantilevered spectacle is complemented with deference to the public realm below. On the ground, the compact footprint allows pedestrian access to the water, carving out an open and permeable space. Here, an employee cafeteria doubles as a public bistro that quietly animates the street level.

Atop its discrete base, the building accommodates almost 15,000 square feet of office space. Inside, the three-storey office interior by Firm Architects offers an exceptionally breathable work environment. A clever layout nests the smaller third storey on a podium within the central volume, framing both levels with generous double-height windows. Topping the building, a discrete fourth storey overlooks an accessible green roof. 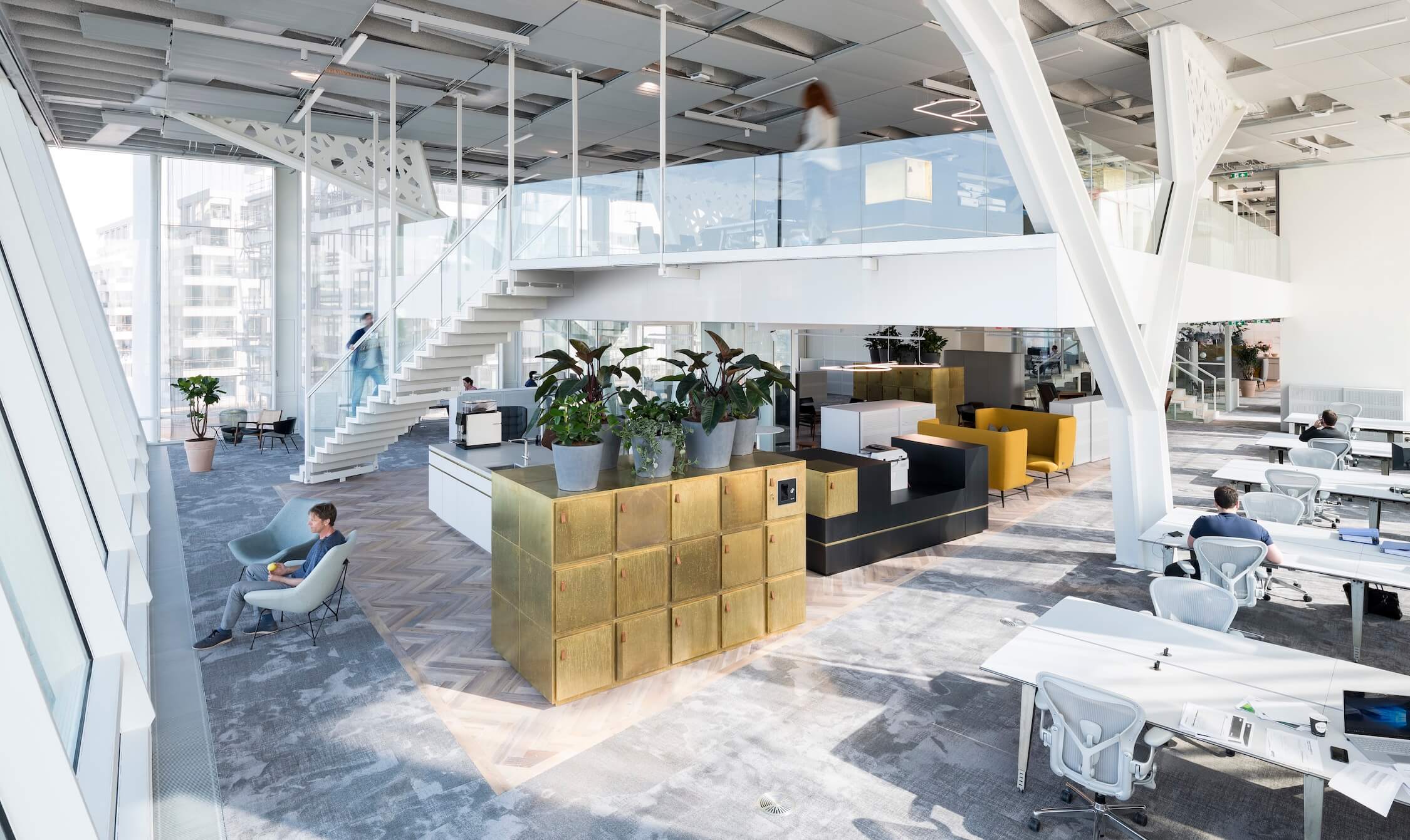 The three levels each host a distinct program. Workspaces are all clustered on the second floor, with desks arranged by the windows and slightly more casual spaces tucked underneath the third storey podium. The middle level is devoted to a conference space, as well as small glass-enclosed meeting rooms, and a pantry. Upstairs, a flexible open room – featuring benches that slide down from the ceiling at the push of a button – completes Amvest’s new hub.

At the heart of the building, the glazed elevator volume ties it all together. While the elevator itself is a vital accessibility feature, it’s designed to move slowly, offering moments of private interlude and conversation. Each landing is also filled with ample greenery that humanizes the building’s high-tech design.

With the elevator intentionally slowed, employees are encouraged to take the adjacent stairs. Bathed in light, the central triple helix staircase is highlighted as a prominent – and inviting – architectural feature. At Amvest, the back of house is front and centre.

In a building where the elevator is the only fully enclosed space (even the bathrooms have windows), the office is a very, very open one. But is that for the best? An environment where everything is designed to encourage interaction and collaboration makes privacy and quiet hard to come by. What’s more, a double-height space where noise and activity is coming from above – and all around – risks creating a feeling of exposure. Fortunately, there are moments of respite, if too few.

Softened by elegant details – including the striking acid-aged brass employee lockers – the interior nonetheless evokes a sense of comfort that belies its radical openness. In a boardroom, a mid-century table by Osvaldo Borsani is well paired with leather Arper Catifa chairs and Oblure’s Mondo light pendants. The furnishings introduce a sense of place to a transparent room.

Back outside, the building itself pairs structural drama with surprising grace notes. The elegantly resolved exoskeleton underlines a sense of aesthetic balance, while the chain mail curtains lining the double-height windows complement the sleek glass and steel structure with a bit of texture. (Together with the extruded steel fins, the metal curtains also mitigate solar heat gain, making for a thermally efficient building envelope).

The result is a building that’s both bold and contextually attuned. For an emerging neighbourhood, that’s an auspicious enough start.