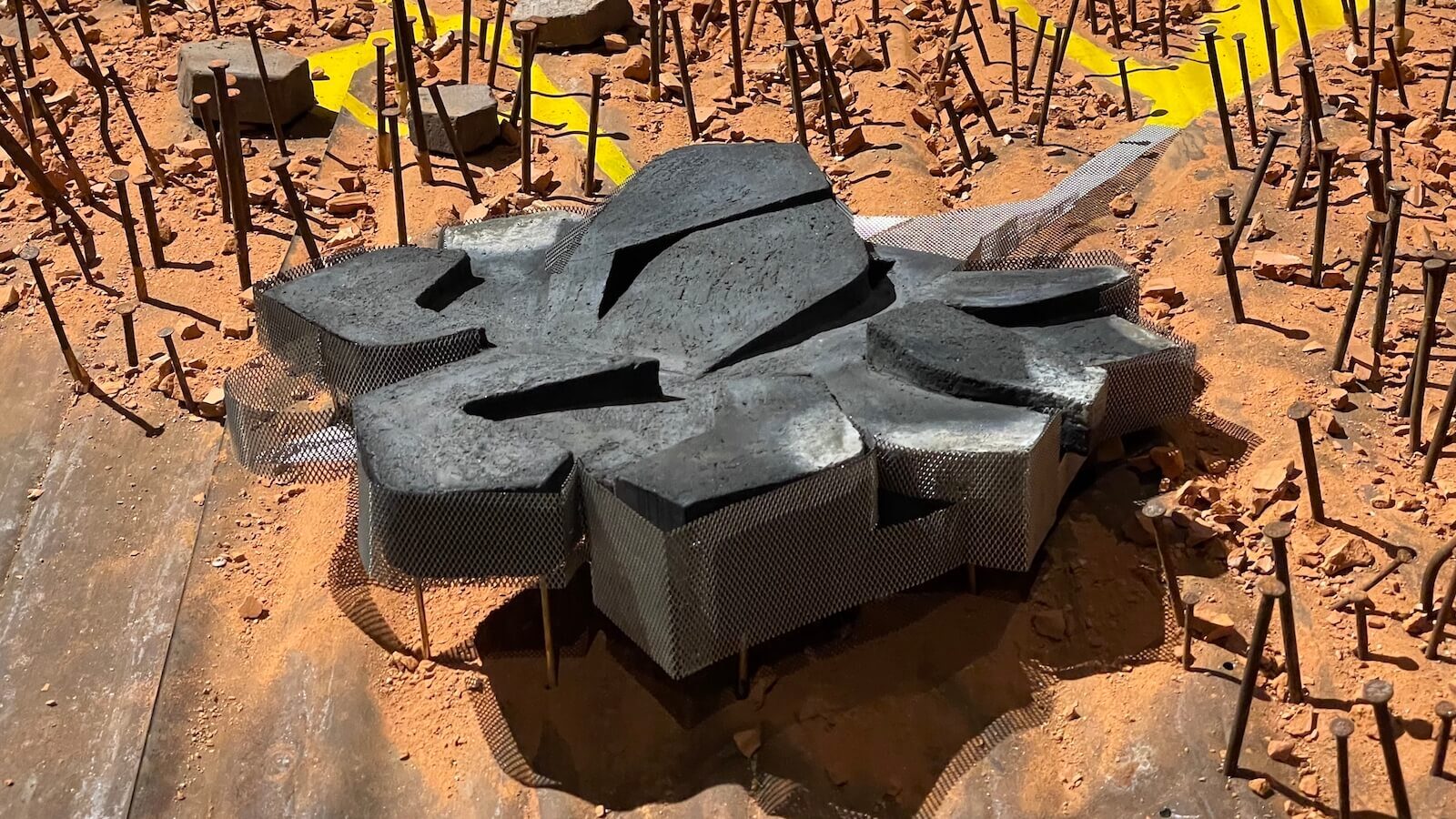 An Indigenous Film School in Ontario Goes to Venice

The new architectural vision for the Weengushk Film Institute on Manitoulin Island is on view at the Venice biennale.

On Manitoulin Island, a modest building serves as the home of the Weengushk Film Institute, dedicated to teaching movie and television arts to Indigenous youth. The institute was founded in 2002 by Dr. Shirley Cheechoo, a multi-award-winning Cree actor, artist and filmmaker who wrote, directed and starred in the 2001 film Bearwalker, the first dramatic feature film to be made by an Indigenous person in Canada. She was motivated to establish WFI by her “frustration as a mother and as a native woman, in seeing the constant failure of Aboriginal people to thrive and live, dream and hope.” Dr. Cheechoo is also a survivor of Canada’s horrific residential schools. Through her efforts over the years, the institute has partnered with Brock University and has also launched an international film festival, the latter “as a way to express our voices, our issues, our storytelling – and to be able to help with the whole truth and reconciliation and also help people with decolonization in the country.”

This goal might now receive even broader attention on the global stage.

Of all places, Weengushk Film Institute is being showcased in the Italian pavilion at the Venice architecture biennale. There, a new architectural form for the institute designed by Stefano Pujatti and Elastico Farm is being presented. Because, while the school’s program is nothing short of inspiring – and its lush surroundings on the world’s largest freshwater lake island undeniably beautiful – its current home is not quite as uplifting. Dr. Cheechoo’s vision is to transform it into the physical place it deserves to be. 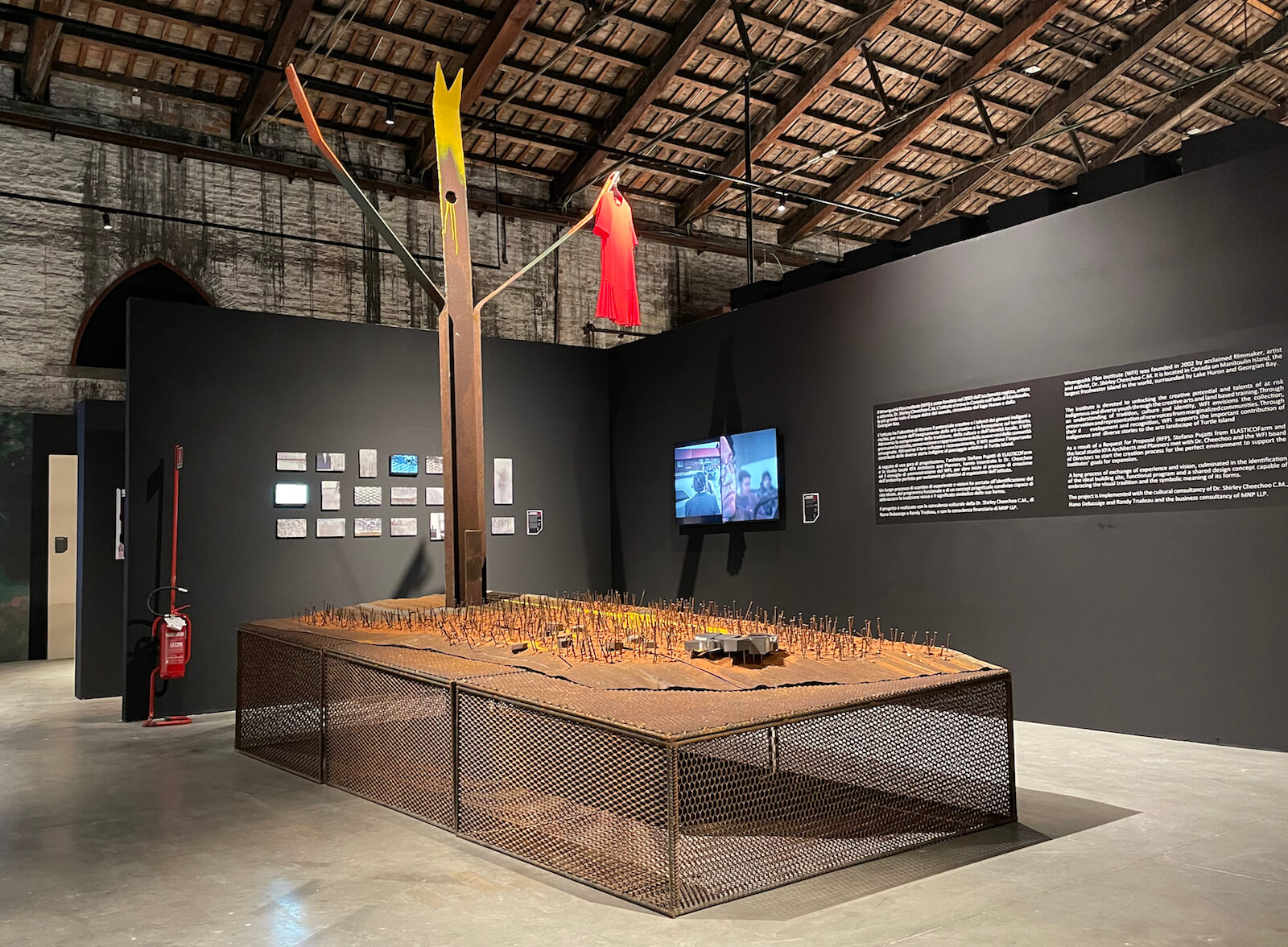 The design for the new building, which is still seeking funding, is in the shape of a turtle lifted off the ground on stilts. Carrying its home – and the world, metaphorically – on its back, the turtle has enormous significance for Indigenous Peoples, for whom North America is Turtle Island. The idea came from Dr. Cheechoo and was interpreted by Pujatti. “The question,” he says, “was how to make a building that is a turtle so that users can symbolically identify with it and at the same time have it make sense architecturally.” As a biophilic design, the building takes the turtle’s circular form – and the arrangements of the scutes on its carapace – as spatial components. In the centre of the building would be the main theatre, which could also host social events, with all other interior spaces, including labs and classrooms, radiating from it. The model shown at the biennale was created with burnt terracotta. In practice, the structure will be constructed with local materials: wood, stone from Manitoulin’s quarries and ice. Yes, ice.

While conceptualizing a cutting-edge house in Toronto a number of years back, Pujatti explored how ice enclosures could be naturally insulating. For Weengushk, that idea is applied to devise a micro-climate for the building. By surrounding the structure in metal mesh, an ice crust would form around its north, east and west sides to buffer the building from the cold climate – and link it back to the landscape. The roof would be accessible – another place for performances, as is the space below the elevated building – while cuts in the turtle’s shell would bring light deep inside. 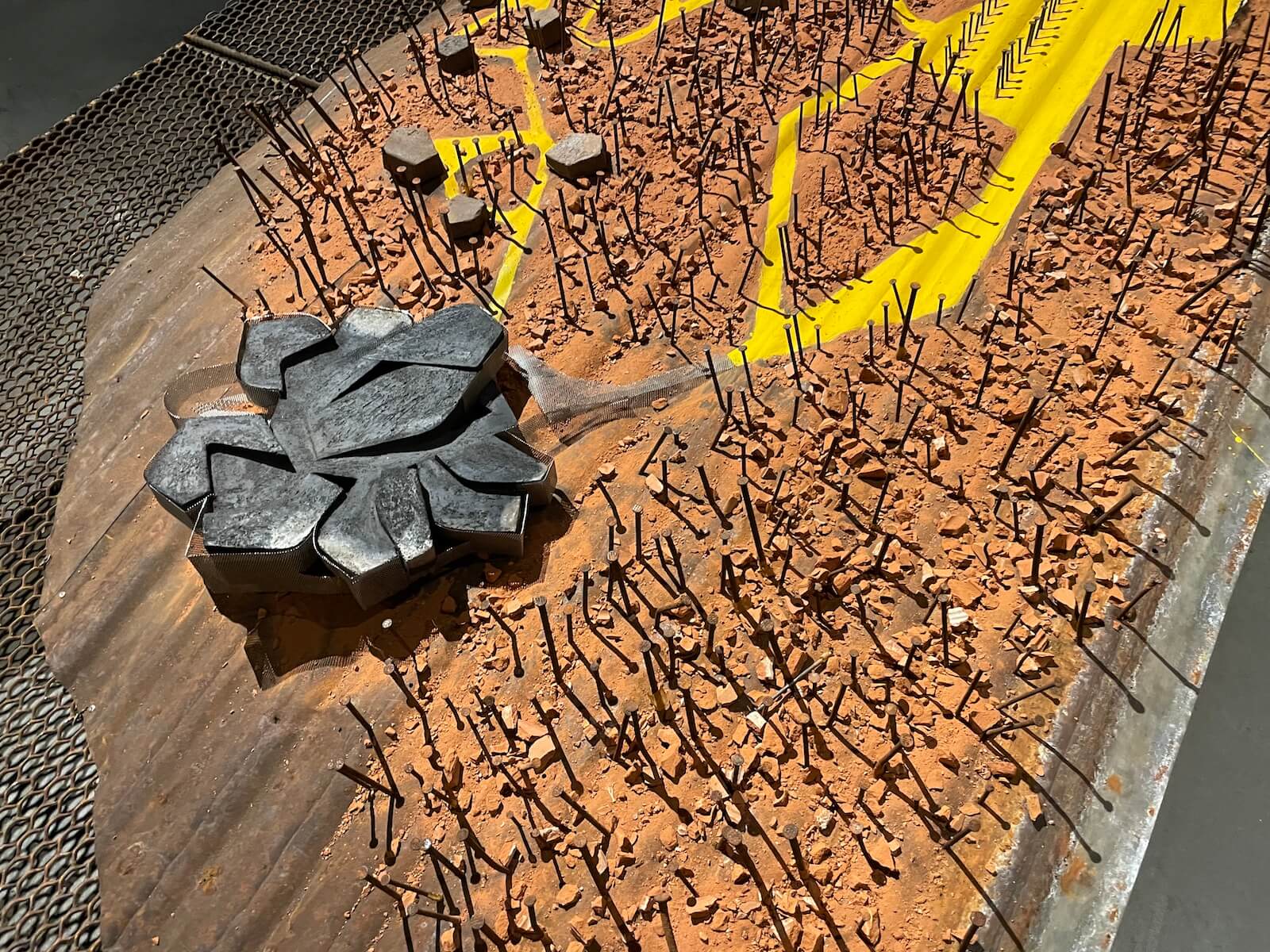 The journey to the new home for the institute – and that concept’s inclusion in the Venice biennale – began around the time when Pujatti, who works in Italy and Canada, created an installation called We Are the Bear for EDIT (a 2017 Toronto design festival where, full disclosure, I was programming director) with the aim to auction off its central sculpture in order to raise funds for WFI. (The school decided they’d rather have the bear sculpture instead.) He had learned about the institute through friends and became interested in its program, later meeting with Dr. Shirley Cheechoo, at the same time that he began immersing himself in issues of importance to Indigenous Peoples. In 2019 he visited WFI. “The program was so interesting – it’s giving voice to this youth that is at risk. I saw a lot of energy from the teachers, the students and the organization,” Pujatti recalls. So, when WFI launched an RFP, his firm, Elastico Farm in partnership with KFA Architects, entered. It won, and Pujatti set about meeting with the school and with Elders to get to work. 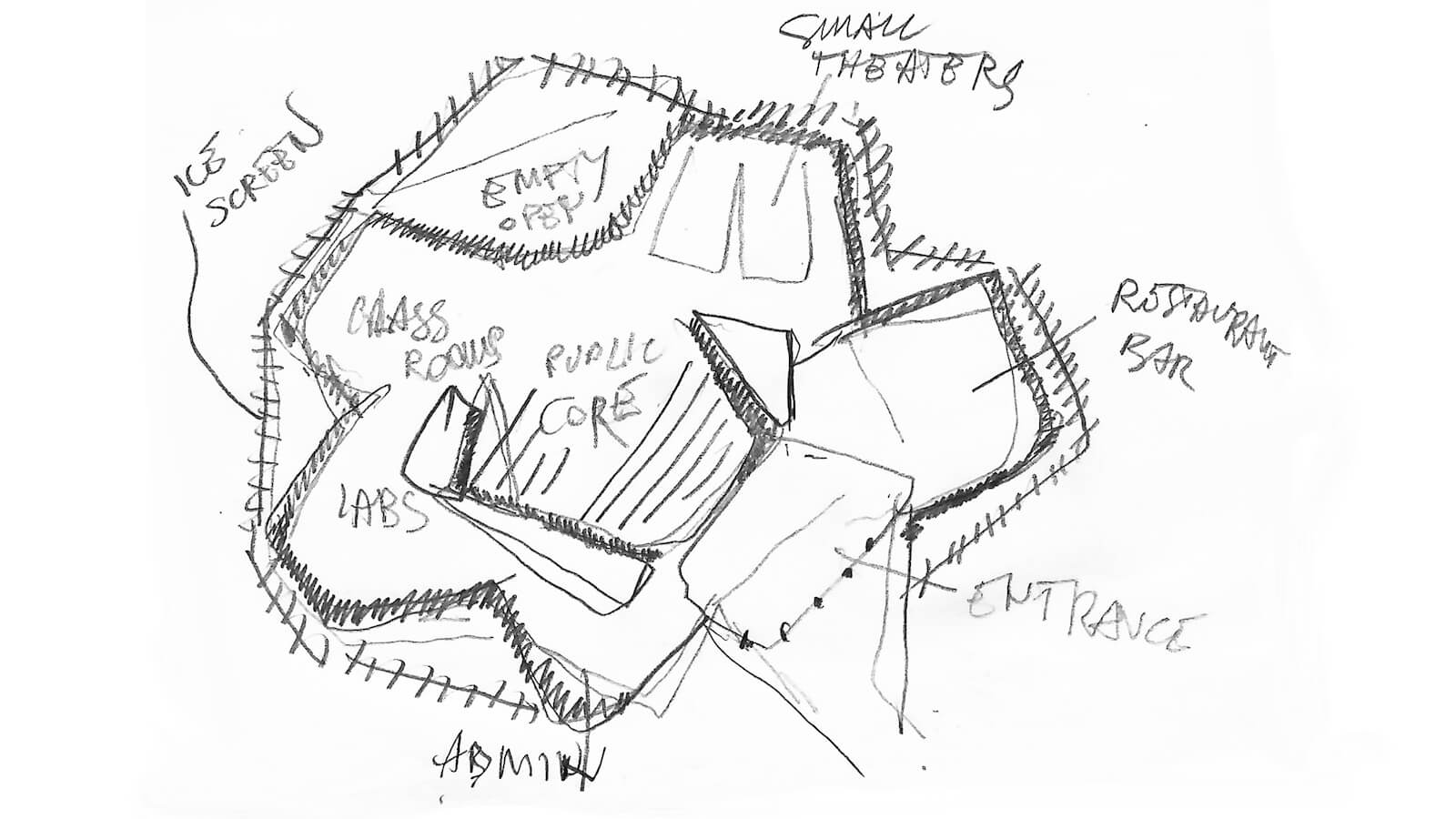 For the architect, presenting the project (still in gestation) in Venice was important in order to bring international recognition to the new architectural vision – but mainly to the school itself and its role in reconciliation. In the first weeks that the biennale was open, visitors would come by and see the project, one of a multitude in the Italian pavilion, and view the film made for it, in which Dr. Shirley Cheechoo speaks about WFI, and of her experience in residential schools. After the remains of 215 children were discovered under the grounds of a residential school in Kamloops, British Columbia – victims of a horrific genocide with many more burial grounds around the country – many returned to the installation with a better understanding, both of Dr. Cheechoo’s message and of the profound significance of her work. 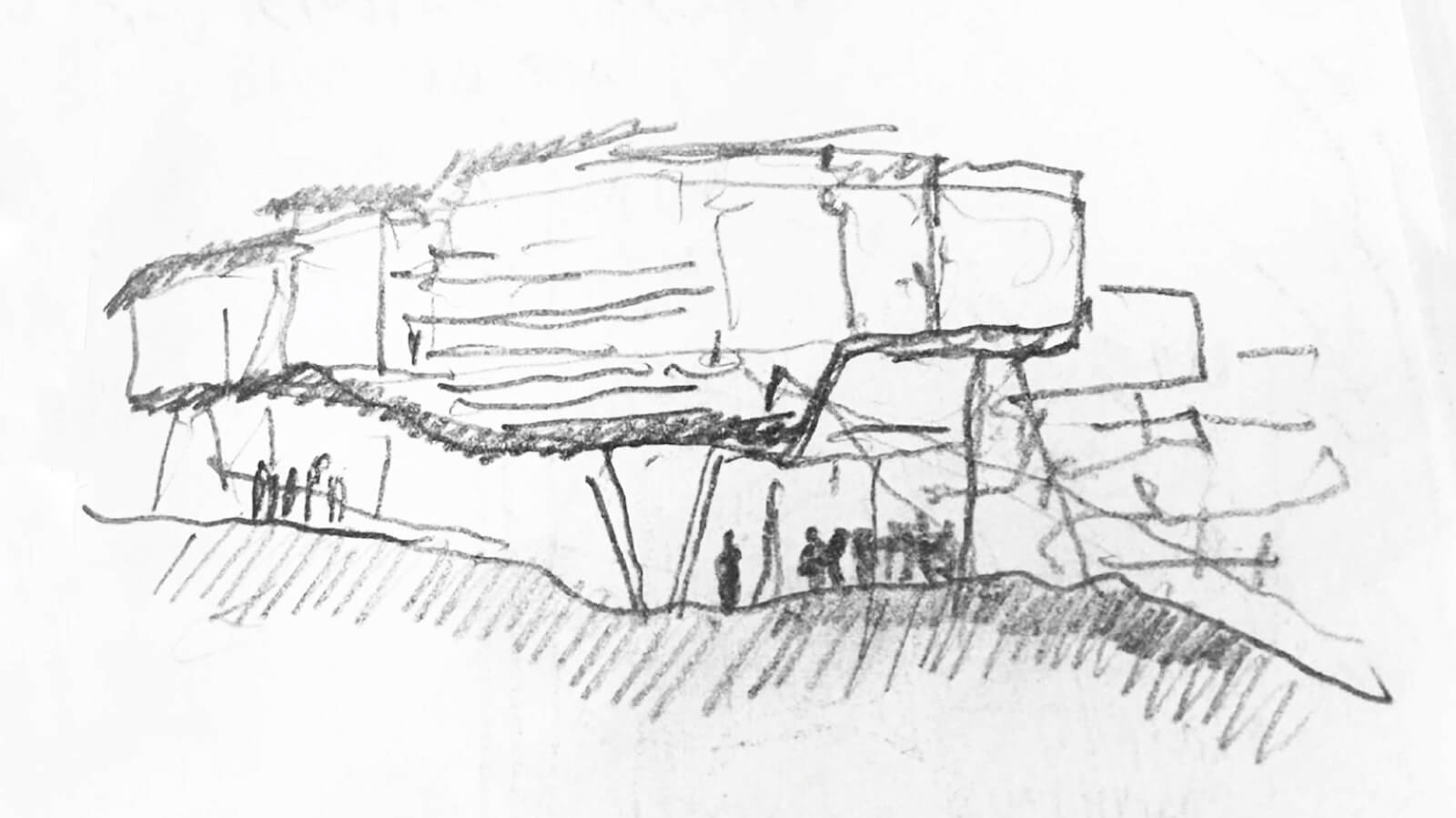 The new architectural vision for the Weengushk Film Institute on Manitoulin Island is on view at the Venice biennale.