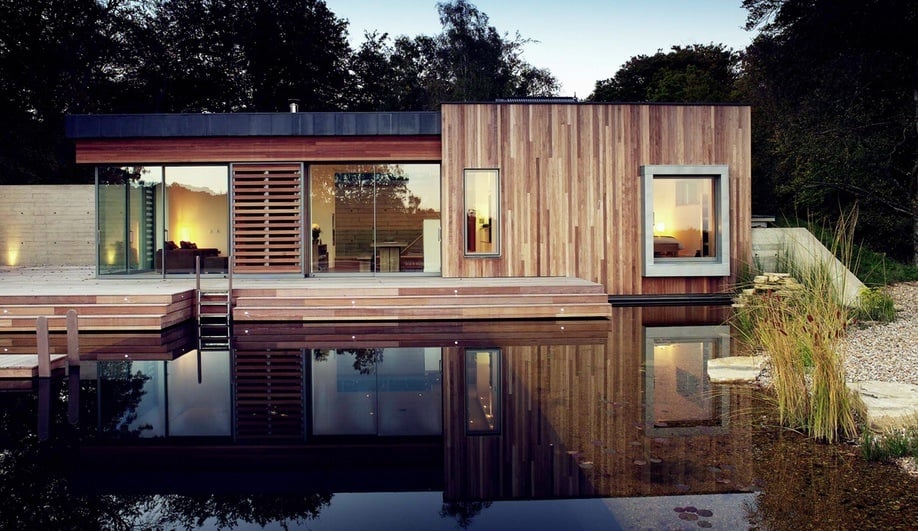 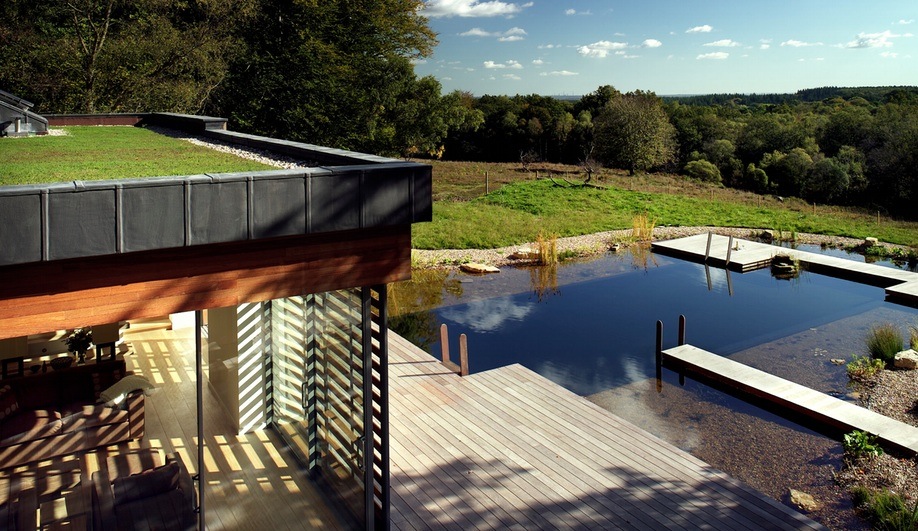 The green roof is planted with sedum native to the Southampton region. The site offers views to the strait of Solent and the Isle of Wight beyond. Photography by Nigel Rigden. 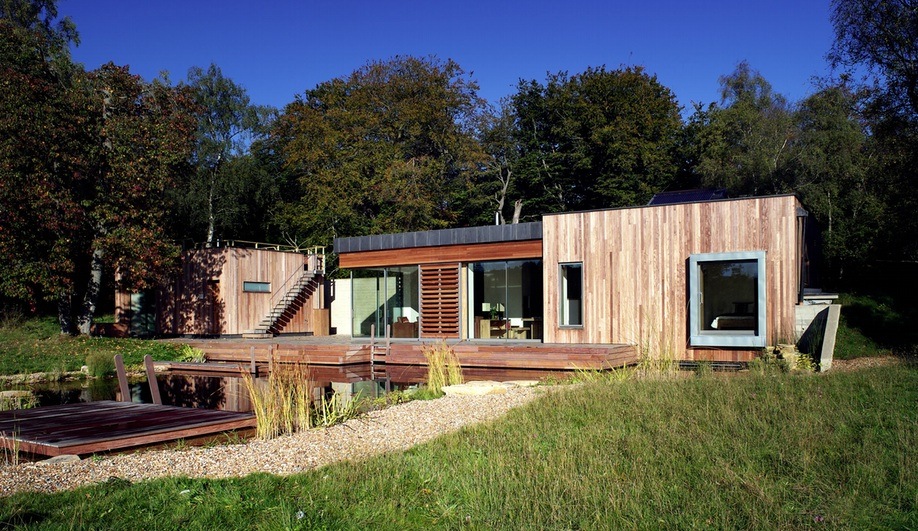 A natural swimming pond hosts a variety of local fauna. At left, the annexe holds the guest bedroom, with cantilevered stairs to a rooftop lookout. Photography by Nigel Rigden. 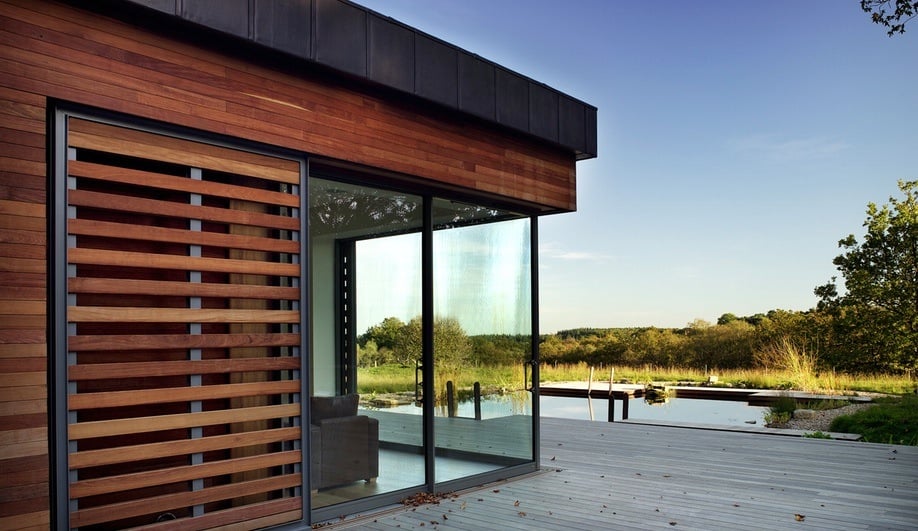 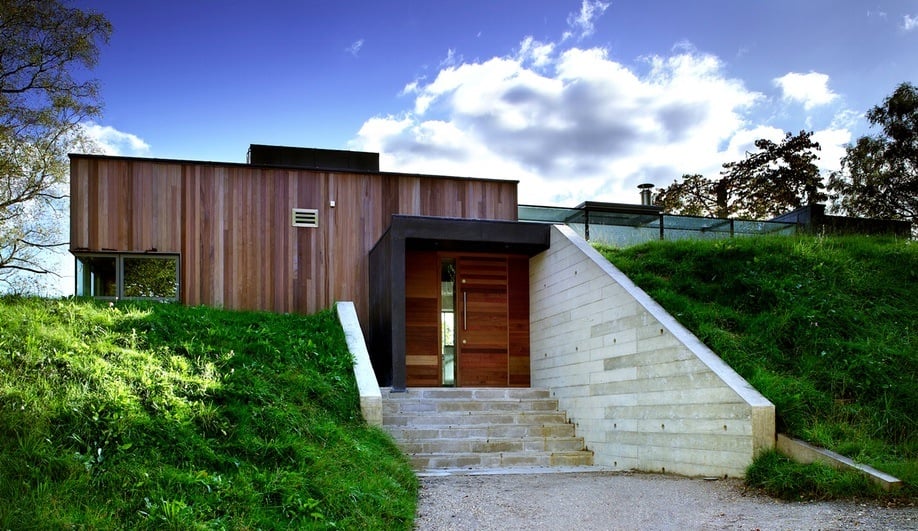 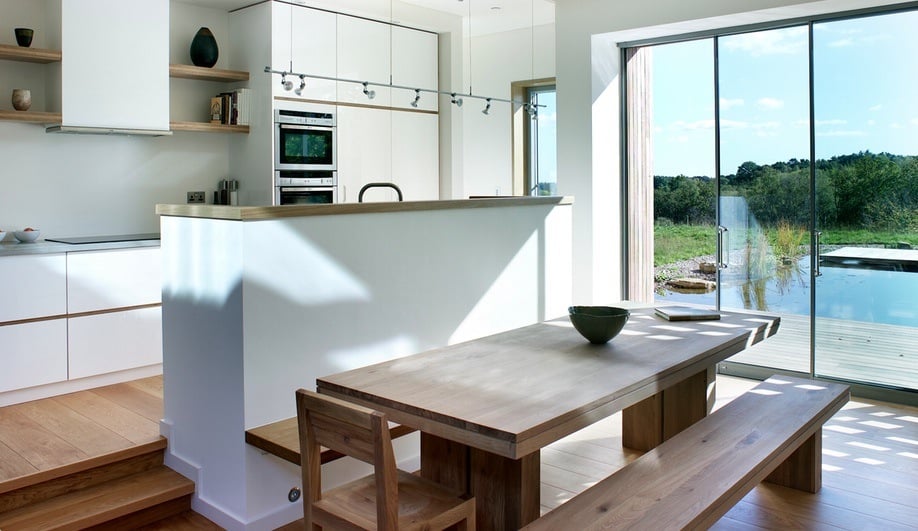 Large windows overlook the swimming pond at the top of the sloping site. Photography by Nigel Rigden. 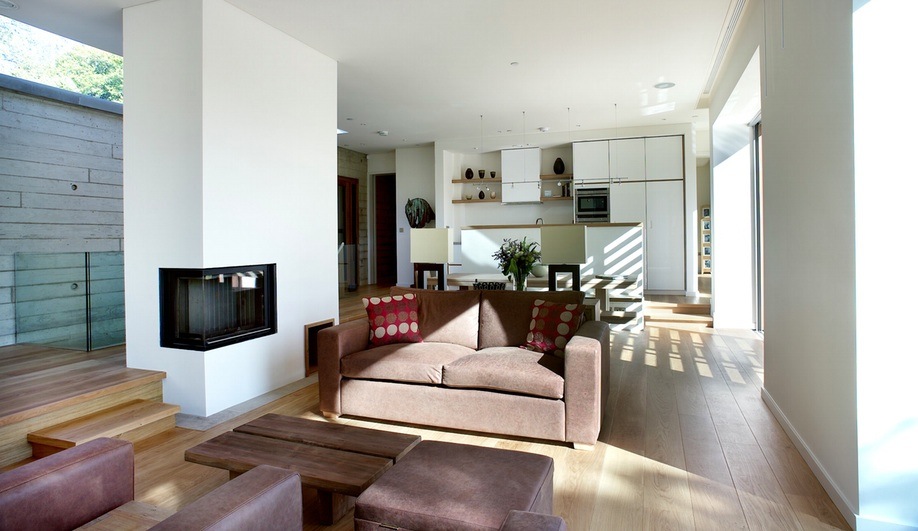 The great room and kitchen are flooded with daylight; at left, a light well allows light into the basement level. Photography by Nigel Rigden.

While their aging cottage nestled among beech trees was undeniably charming, the owners of a property near Southampton, U.K., felt it wasn’t meeting their sustainability and accessibility requirements. So the couple, both in their 50s, commissioned PAD to design a modern home on a delicate site – a 7.5-hectare plot of wooded and boggy heath in New Forest National Par designated as a Site of Special Scientific Interest for its diversity of fauna.

The new house, meant as a retirement home, comprises simple, timber-clad boxes aligned with a concrete “spine.” The main structure, with its basement, living area and kitchen, and two bedrooms and bathrooms, juxtaposes against an annex holding the guest bedroom and bath. Conservationist regulations limited the footprint to 120 square metres – only 30 per cent larger than the pre-existing two-bedroom cottage. Stoney Cross House meets other strict requirements as well, especially when it comes to sustainability.

PAD began by orienting the house to the south, maximizing daylight with broad windows behind retractable shutters, and increasing solar gain to heat the home’s water. Thermal massing also plays an important role: PAD added a basement and thick concrete walls to moderate temperature swings, and an earth berm (made from the dirt excavated to create the basement) rises up the height of the northern facade, further insulating against cold winds and traffic noise. A ground source heat pump heats the floor in winter, and disperses heat during the summer months.

And in a gesture sure to be appreciated in a home that is currently only intermittently occupied, the heating and hot water can be activated remotely, ensuring both are ready to receive occupants when they arrive – without wasting energy.

Sensitivity to the location informed the material choices as well, from the native sedum chosen for the green roof to the planks of Douglas fir used to cast the concrete wall; sourced from within 3.5 kilometres of the site, these planks were reused during the casting process, and repurposed after construction. Also, instead of a chlorinated pool, a natural swimming pond welcomes local reptiles, which were carefully relocated and fenced out of the site during construction.

Accessibility, for the owners and their elderly parents who visit often, was also of paramount concern. PAD replaced the stepped entrance with a more level, graded gangway. Throughout, they levelled the thresholds over the sliding doors, and inserted a removable ramp for access over the two steps separating the living area from the bed- and bathrooms. Overall, this is a house design that respects its surroundings and its occupants.

SHARE
Twitter, Facebook, LinkedIn, Pinterest, Email
TAGS
Green Design, Residential,
AZURE is an independent magazine working to bring you the best in design, architecture and interiors. We rely on advertising revenue to support the creative content on our site. Please consider whitelisting our site in your settings, or pausing your adblocker while stopping by.