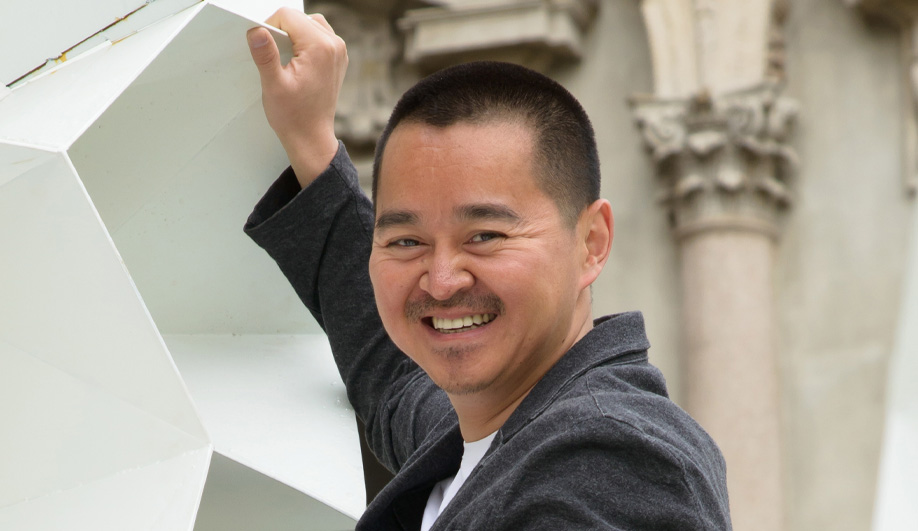 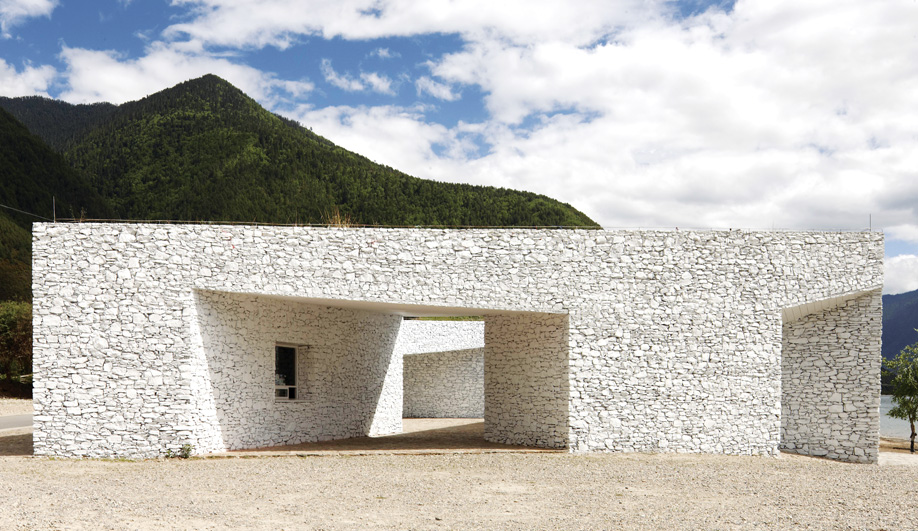 The Niyang River visitor centre, in Nyingchi, Tibet, is a collaboration with Zhao­ Yang Studio. The irregular shape of the 430-square-metre building, which houses amenities for hikers, is further carved so that light filters through in surprising ways. 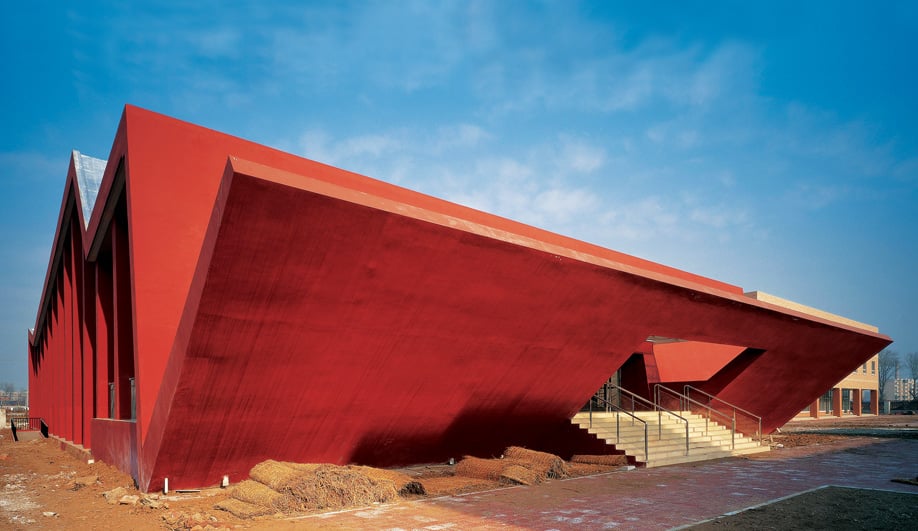 With its accordian-like red roof, the Wuyi primary school auditorium, in Beijing, is the project that put Standardarchitecture on the map. The multi-purpose concrete hall serves both the Wuyi housing community and its elementary school in Tongzhou, a suburb of Beijing. 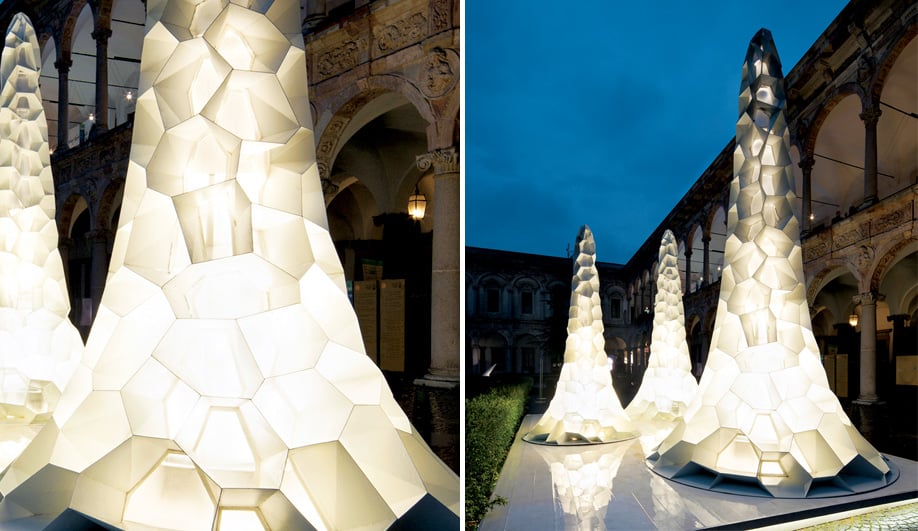 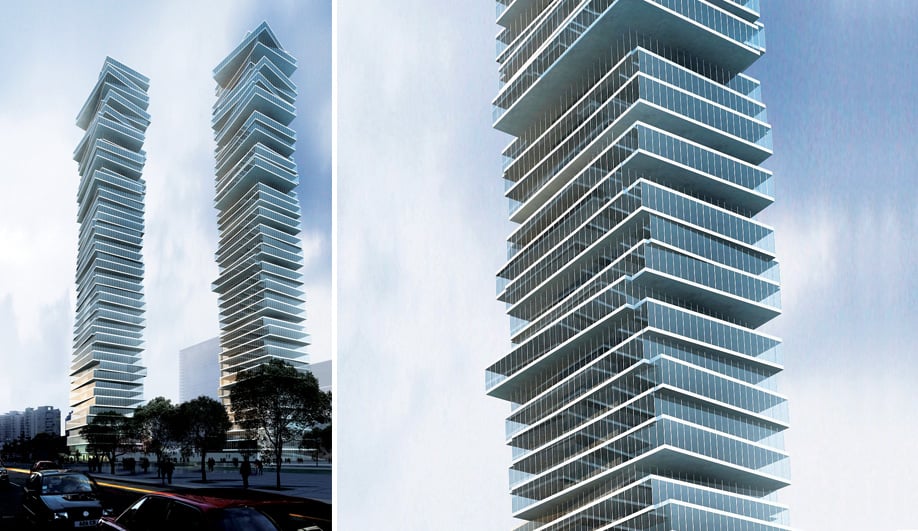 The Dancing Book Towers concept was proposed for the historical Wuchang district in downtown Wuhan, China. The towers evoke slender, delicately balanced stacks of volumes, due to their slightly offset floor plates. 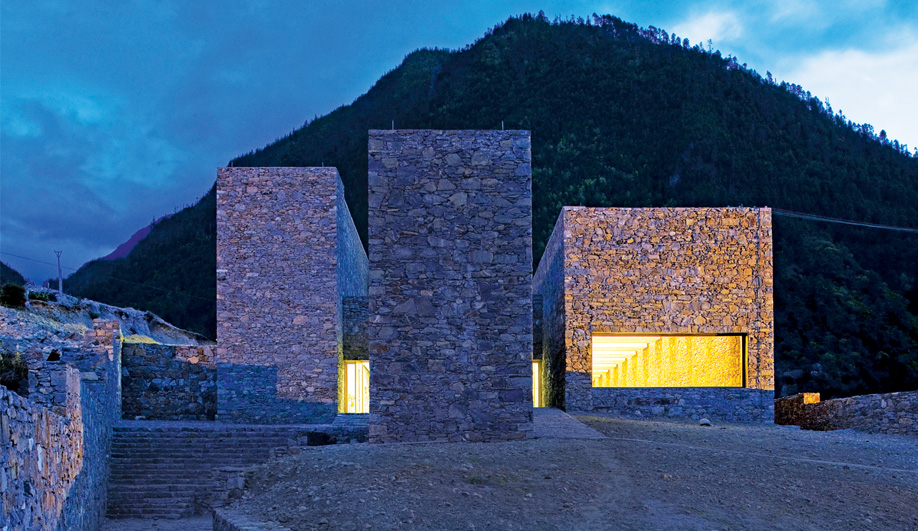 The Namchabawa Visitor Centre, in Nyingchi, Tibet, serves as the community centre for the village of Pai Town and as a visitor centre for tourists. The minimalist abstract composition is designed to blend into the landscape, with blank masonry faces modelled on local retaining walls. 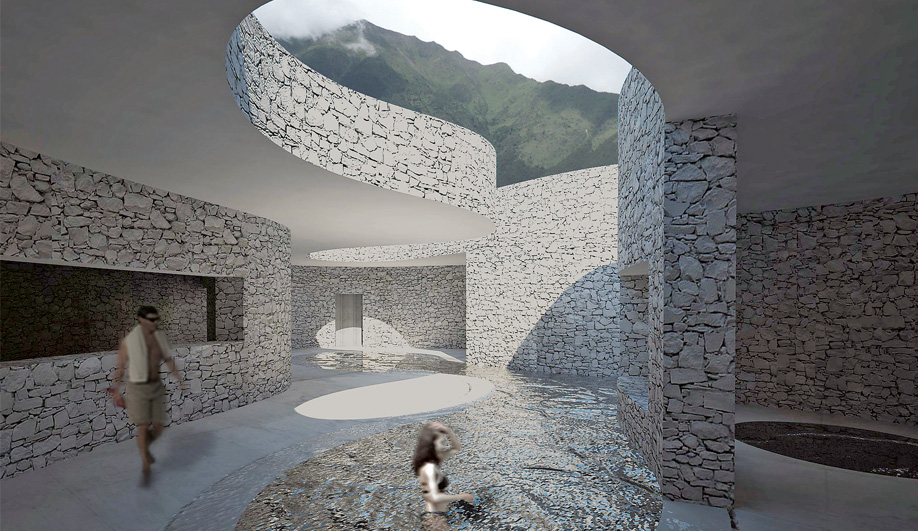 Gega spa, in Nyingchi, Tibet, will be buried in the hillside, with only a discreet path and an amoeba-shaped courtyard visible from the surface. The cavelike space – all interior and no exterior – is shaped by layers of curving walls, built with a rough local stone. 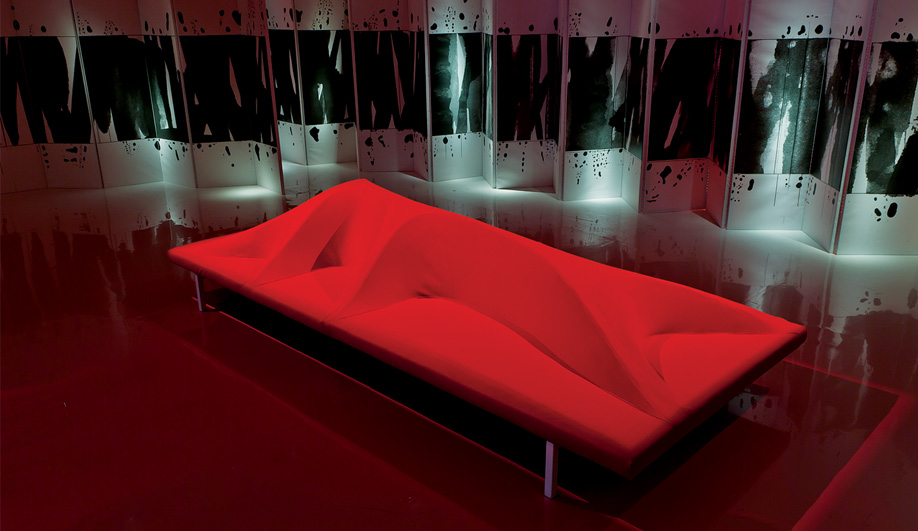 The Hidden Dragon sofa was designed for Moroso’s 60th anniversary. It was part of The Way of the Water Dragon, a multi-sensory installation in Milan. 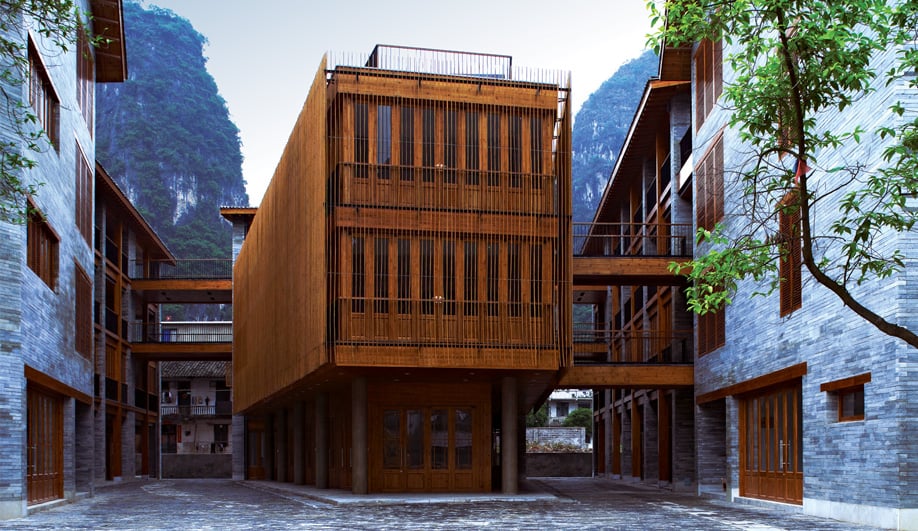 The Yangshuo storefronts, in Yangshuo, occupy an entire block in a small town near Guilin. The bamboo-clad structure in the centre is surrounded by six retail buildings clad in blue-green local stone. 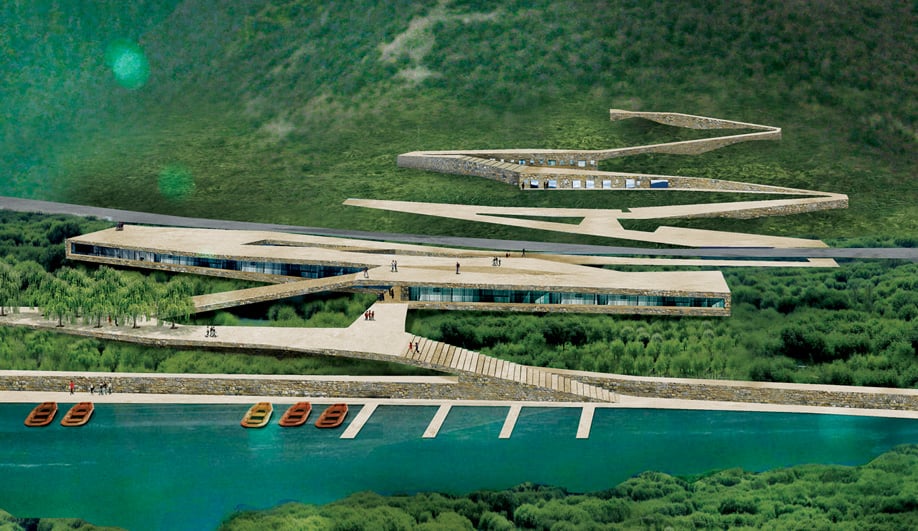 Niangou Boat Terminal II, located along the bank of rnthe Yaluntzangpu River, is a network of tourism infrastructure designed in collaboration with Portuguese office Embaixada.

Backstory
Zhang Ke counts himself among the first generation that fully benefited from the reform policies of Deng Xiaoping, the Chinese Communist Party leader who ushered in an era of greater economic liberty and openness toward the West in the 1980s. After completing his architecture degree in the U.S., at the Harvard Graduate School of Design, Zhang Ke was able to return to a prosperous Beijing and establish Standardarchitecture in 2001. Yet he differed from most of his compatriots, who have a tendency to transition from studying to building before their ideas can gestate properly. The result, as he scornfully puts it, is “pirate copies” of foreign models.

Completed in 2003, the firm’s first significant building, the Wuyi Primary School Auditorium in Beijing, announced a fresh sensibility. The concrete roofline zigzags down to form the front entrance, in a bold, vaguely autographic gesture, and the entire structure is painted in Forbidden City red. With this project, the practice positioned itself visibly within a crowded field, yet it struggled to sustain a consistent and original vision in its eclectic and productive early years.

The Qingcheng Mountain Tea House, completed in Chengdu in 2007, established the most promising path, combining traditional wood and stone construction with formal and structural invention. In this tight grouping of five rectilinear courtyard enclosures, three are meant for tea ceremonies, and all are punctured with dynamically positioned apertures.

Tipping Point
While the Tea House won the respect of locals, Standardarchitecture began attracting international attention in 2008 for a series of small structures along the Yaluntzangpu River in Tibet. These tourist pavilions, meant to accommodate hikers and boaters, showed Zhang Ke and his associates Zhang Hong, Hou Zhenghua and Claudia Taborcla developing a mature language.

The first was the Yaluntzangpu Boat Terminal. A wedge-like structure that rises gently from its site, it houses a waiting lounge, a ticket office, washrooms, and overnight lodging connected by ramps out of which grow poplar trees. It bridges land and river with such grace and sensitivity to terrain that it stood out amid the frenzy of construction in the larger region, which saw entire cities designed and built virtually overnight. Around this time, the firm started winning its first accolades, including the Best Young Architect Prize in 2008 from the China Architecture Media Awards.

Elsewhere along this scenic route, Standardarchitecture consistently hit the mark with strange yet uncannily familiar structures, including the Namchabawa and Niyang River Visitor Centres. In both buildings, the prismatic massing, the minimalist abstraction, the all-white surfaces and the spatial inventiveness seem alien to the region, but they are of the place: the buildings are made of stones found nearby, and built by local craftspeople working with traditional Tibetan methods. They call to mind the old stone structures and ruins of Buddhist monasteries in the Himalayas.

Unlike Chinese architectural practices that translate classical forms into concrete and steel, Standardarchitecture employs vernacular know-how to realize original and unconventional buildings; and its use of local resources is a commitment to pragmatism, rather than to cultural symbols and identity.

R+D
While the firm’s work is primarily in China and Tibet, it has stayed active on the international stage, participating in biennales and collaborating with such furniture and product manufacturers as Moroso and Alessi. In its speculative projects, the firm explores housing ideas in two radically divergent motifs. One is the egg, a cocoonlike environment for single occupation; three versions of these dwellings appeared at the Shenzhen/Hong Kong Biennale in 2009 a year after an intern at the firm tested out a bamboo prototype (measuring just two by three by two metres) as his temporary – and illegal – home on the streets of Beijing.

But the firm’s favourite recurring theme is the artificial mountain, which made its first appearance as Urban Void at the 2007 Shenzhen/Hong Kong Biennale and has returned in different guises, including as Village Mountains at Milan Design Week in 2012. Wherever these fractal stalagmite structures go up, the firm provides accompanying drawings showing them at a colossal scale, with each of the inner cells teeming with architecture: a vertical village.

The purpose is to combine categories that are sometimes difficult if not altogether impossible to reconcile: nature with urbanization, landscape with architecture. While Le Corbusier lifted his buildings on pilotis to enable the continuity of the greenscape below, Standardarchitecture lifts the landscape instead, and drapes it over the building, substituting a dramatic mountain­scape for the pastoral green.

On the Books
The Niangou Boat Terminal II, the latest and most ambitious in the Tibetan series, is now complete. It consists of a system of terraces and ramps that extend the river edge up to a lookout point on the hillside, accommodating various amenities and rest areas along the way. Its staple application of vernacular is put to even more radical use in a proposal for another Tibetan project, the Gega Spa. This grotto-like space is carved into the hill and lined with a rugged local stone – its swooping curvature a nod to Zaha Hadid, its heavy rustication pure Tibet.