Architecture Education: The School of Odile Decq
"I hope they will change the world." French architect Odile Decq has high hopes for the students of La Confluence, in Lyon, the school she has just founded that rethinks everything about preparing students for their careers. 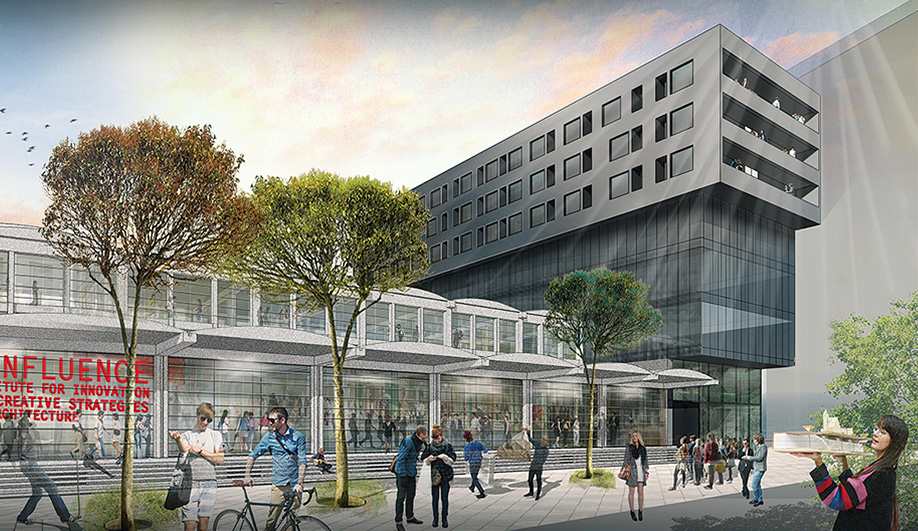 Although the campus is now under construction, the first 10 students enrolled at La Confluence in September. Paris architects Odile Decq and Matteo Cainer founded the school.

With her punk rock persona, French architect Odile Decq often bucks convention. Her portfolio includes the award-winning Opera Garnier restaurant in Paris, a vibrant red and white interior she created by enclosing an outdoor space – where aristocrats once parked their horse-drawn carriages – with an undulating glass curtain. A teacher for the past 22 years and former director at École Spéciale d’Architecture, Decq finally decided to launch a new kind of school, in Lyon, France, liberated from institutional traditions.

“I hope they will build a new world,” she says of La Confluence’s future graduates. Named after a revitalized district of Lyon where such brash buildings as Jakob + MacFarlane’s Orange Cube have reanimated the Rhone and Saône Rivers in recent years (Decq’s own Dark Point building is down the street), the institute’s bilingual program focuses on five themes: neurosciences, new technologies, social action, visual art and physics. As at other architecture schools in France, students will graduate from a five-year program in two diploma cycles of three and two years, as well as an advanced research cycle.

What makes La Confluence unique is how it merges theory and hands-on learning in a dynamic program, where students experiment in architecture, visual arts, film and myriad other disciplines. They also participate in internships and form associations to conduct research and network with architecture programs around the world, either virtually or in situ.

Situated in a retrofitted marketplace, with Decq’s own design for new residences now under construction, La Confluence includes a fabrication lab that is open to the public on Saturdays, “to be more inserted in the city,” says Decq. These facilities are supplemented by local masterpieces: the inaugural class of 10, which arrived this fall, took in classes at Le Corbusier’s La Tourette, a Dominican priory in Éveux. Eventually, Decq hopes to increase enrolment to 200 students.

One of the main reasons she founded La Confluence, along with co-director Matteo Cainer, was to engage students with the social and technological aspects of their field, and nurture a generation of architects who can provide the world with much-needed architectural thinking. “Design is superficial. Architecture is much more powerful. It’s outside and inside, and it deals with questions of complexity and different scales,” she says. “The duty of architects is to help people live better – and they have a lot of work to do.” Decq and Cainer have already attracted an impressive faculty, including Alfredo Brillembourg of Urban-Think Tank; architect Jenny Sabin; and sustainable technology innovator Sheila Kennedy.