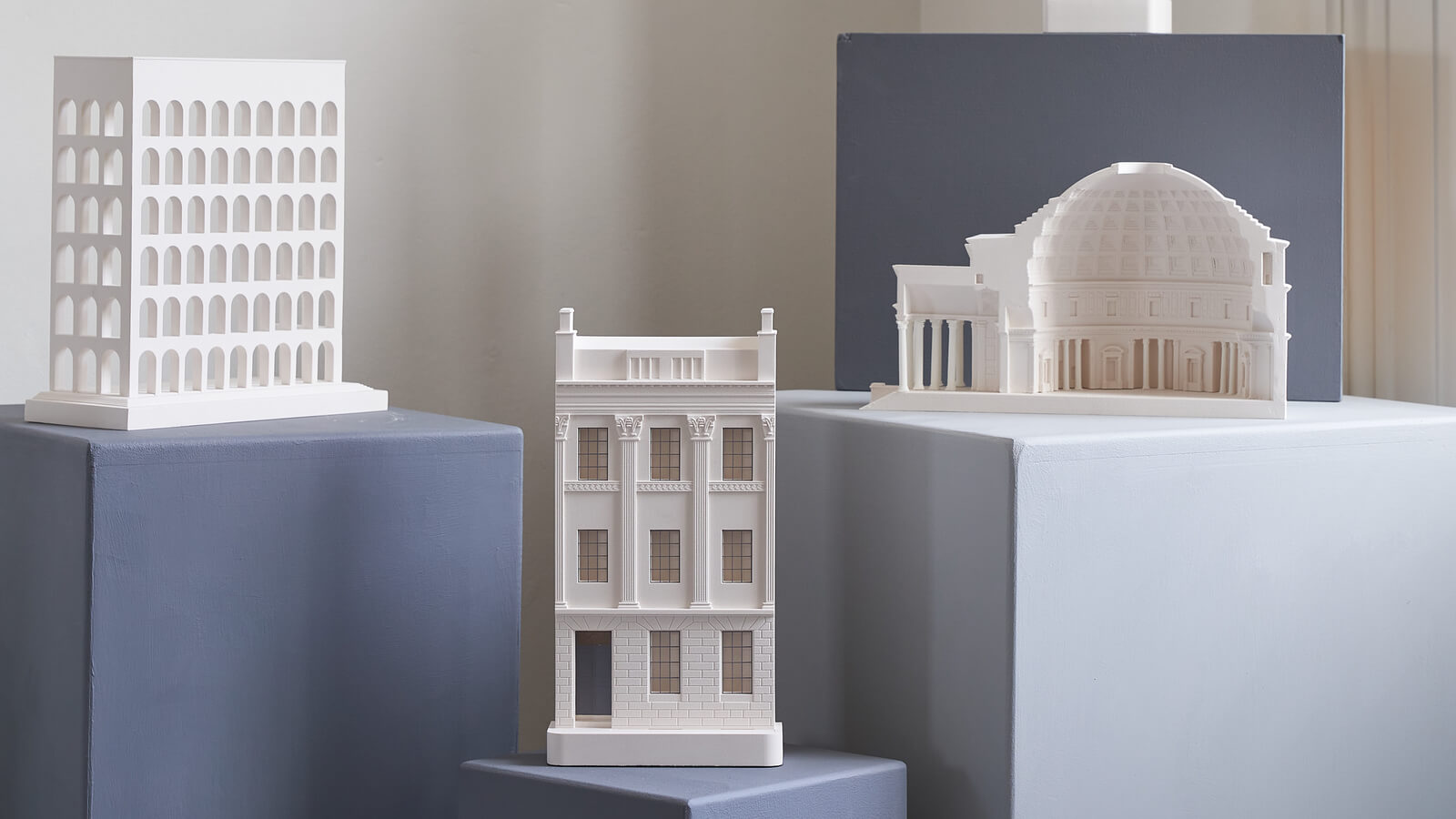 Architecture in Miniature: 3 Iconic Structures as Seen by Chisel & Mouse

Known for its detailed plaster replicas of cityscapes and architectural landmarks, the British studio has released a trio of new models with stories to tell.

The Bauhaus Dessau. Adolf Loos’ Villa Müller. Helsinki Central Library. Since 2011, brothers Robert and Gavin Paisley of Chisel & Mouse have been expertly (and painstakingly) crafting evocative scale versions of notable structures and vibrant cityscapes out of plaster. Like its moniker suggests, the process involves a distinct negotiation of analogue and digital tools — combining advanced modelling with the fine execution of artisanal techniques. With over 70 structures under their belts, the British outfit’s latest trio of models delves deeper into the rich terrain of architectural history. From Rome to London, here are stories behind this new cohort of designs in miniature: 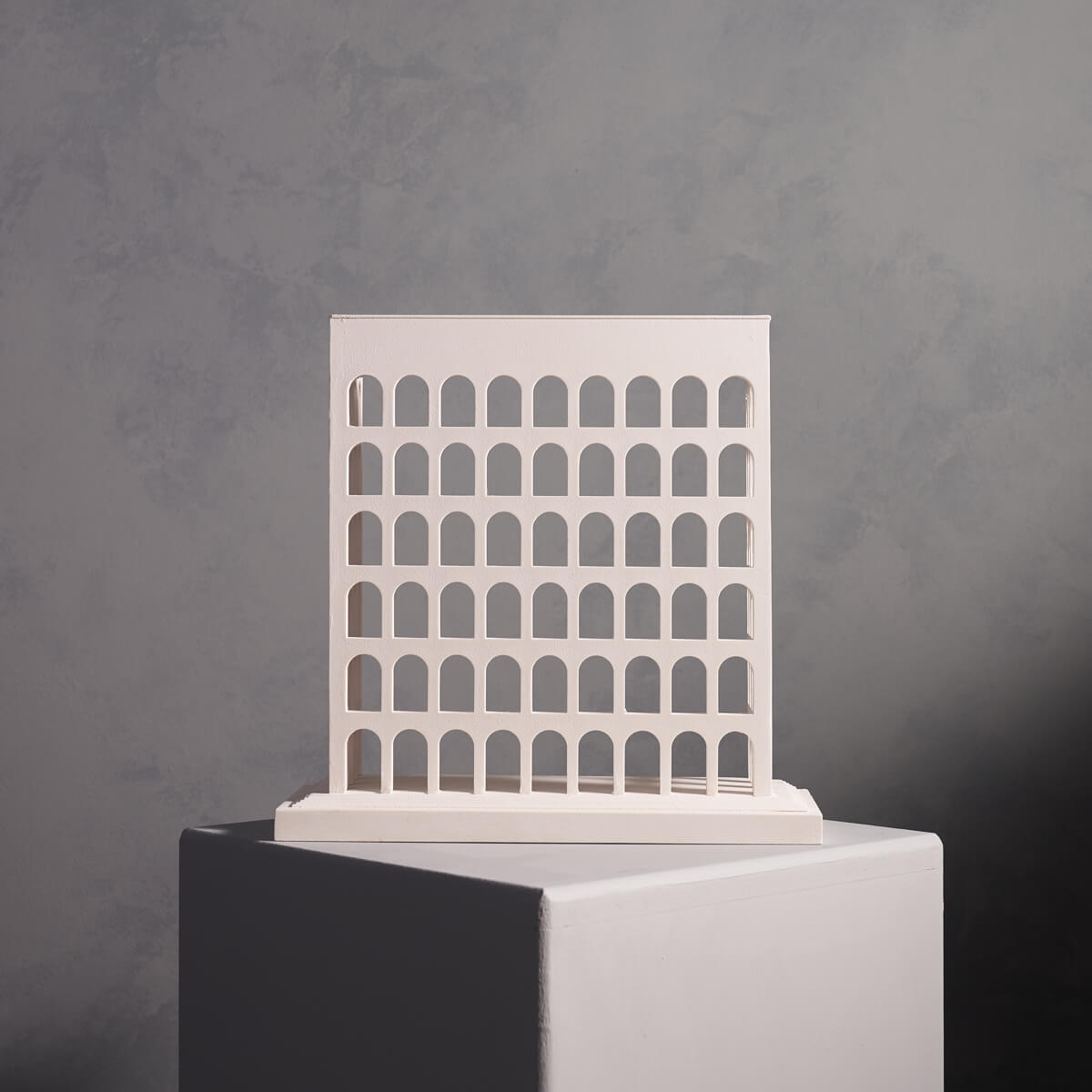 Designed in 1937 by Italian architects Giovanni Guerrini, Ernesto Bruno La Padula and Mario Romano, Rome’s Colosseo Quadrato was originally conceived for the 1942 World Fair. Much of the building’s construction was halted in the outbreak of the Second World War and the festivities were ultimately suspended.

When the structure finally opened its doors to the public in 1953, its intended symbolism as a centrepiece of the Esposizione Universale Roma (EUR) — a “Fascist wonderland” or modern city begun at the height of Mussolini’s regime — was abandoned. With the dictator no longer in power, the site was instead inaugurated with the city’s agricultural exhibition during that same year and later used for the 1960 Olympics. 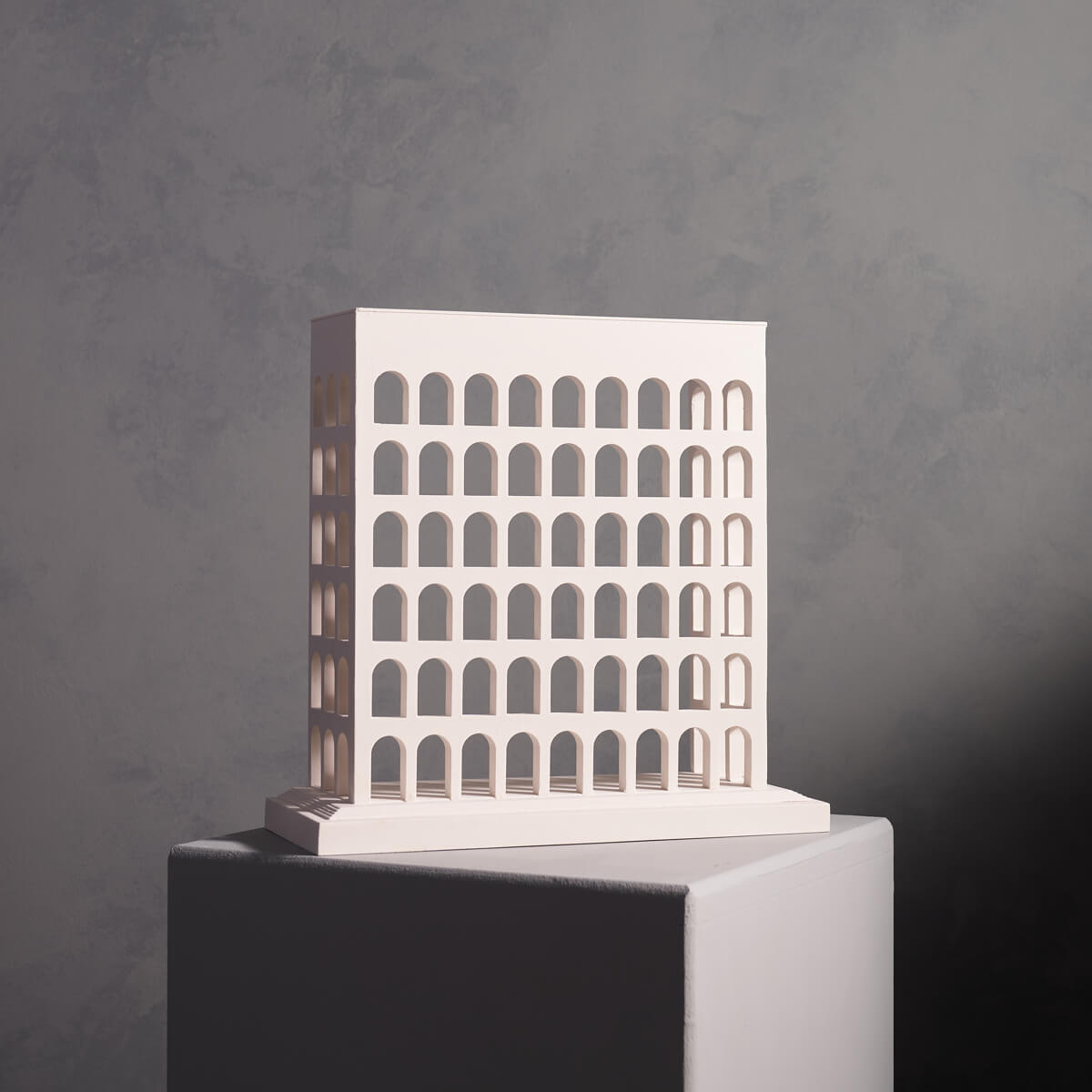 Recalling the icons of ancient Rome, particularly the Colosseum, the travertine-clad, six-storey Colosseo Quadrato deliberately evoked the splendor and power of the city’s past, referencing the nation’s architectural heritage while speaking to its present and, ultimately, its future. The 7,368-square metre complex rises 50 metres from its tiered base and is wrapped entirely by a continuous colonnade of gridded archways in dialogue with its historic precedent.

Though the real thing was acquired by fashion brand Fendi as its HQ in 2015 (it also appeared in films including 1999’s Titus and 2016’s Zoolander 2), the 25-by-15-centimetre Chisel & Mouse version reimagines the “square colosseum” as a three-sided echo of its imposing presence. In so doing, the model appears as a kind of ghost: a spectre of Colosseo Quadrato’s Fascist imaginary that is nonetheless haunting in its rational beauty. 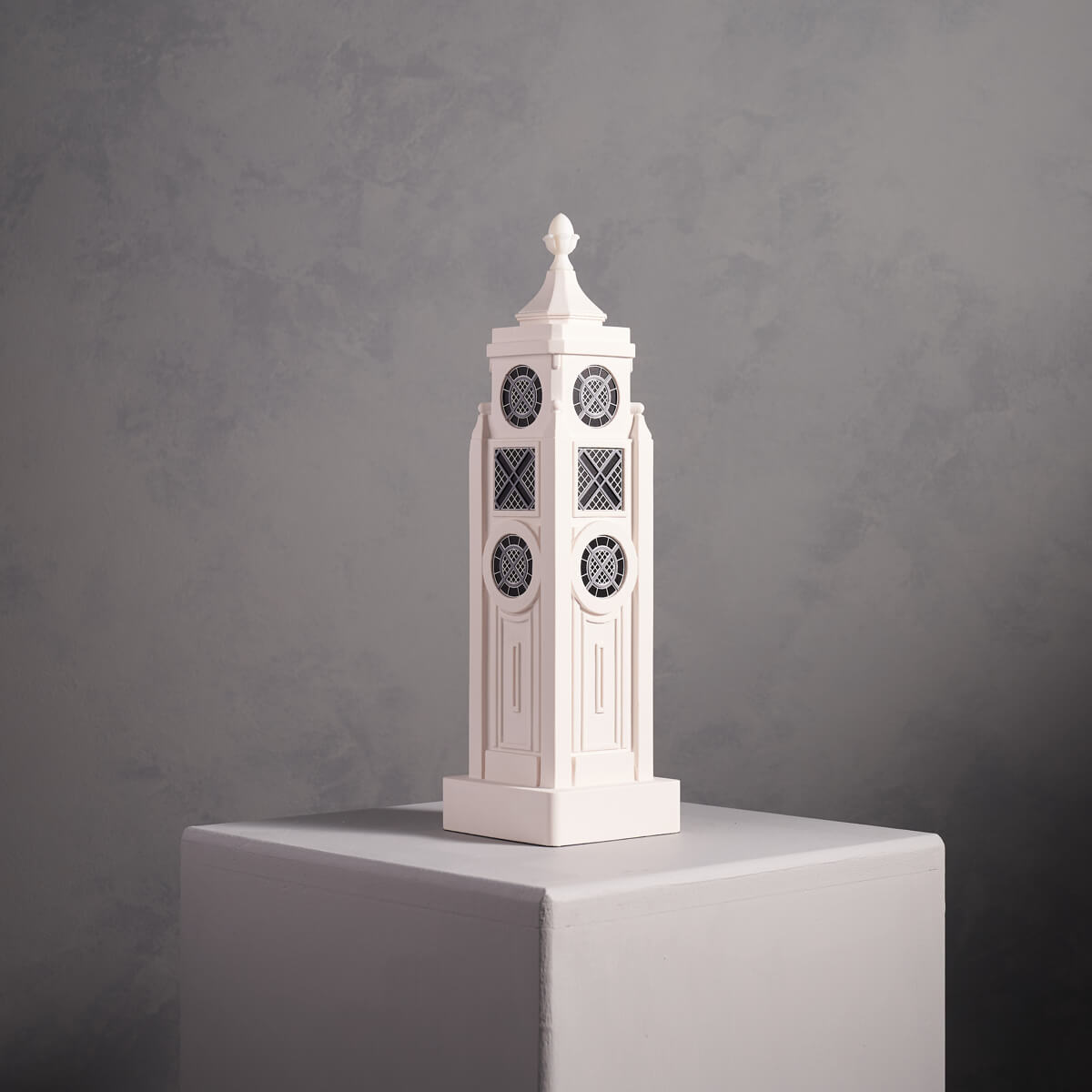 Epitomizing art deco elegance on London’s South Bank, the Oxo Tower is a quiet yet evocative landmark. The Oxo company had acquired the site in the 1920s, and set about commissioning local architect Albert Moore to drastically update the original building, a one-time power station that supplied energy to the post office. Begun in 1928 and completed the following year, the renewed tower rises 53.3 metres, presiding over the Thames River and the city skyline.

As part of the redevelopment, the brand had intended to have significant advertising appear on the facade. When the city rejected this proposal, the architect incorporated into the design the building’s trademark oversized circular and square windows. Fittingly, Chisel & Mouse’s model features etched metal elements to represent these now-iconic features.

While ownership of the tower has changed hands over the years, today the site is home to an assortment of programs including the contemporary art space [email protected] as well as shops, studios and the bustling OXO Tower Restaurant, Bar and Brasserie on the eighth floor. 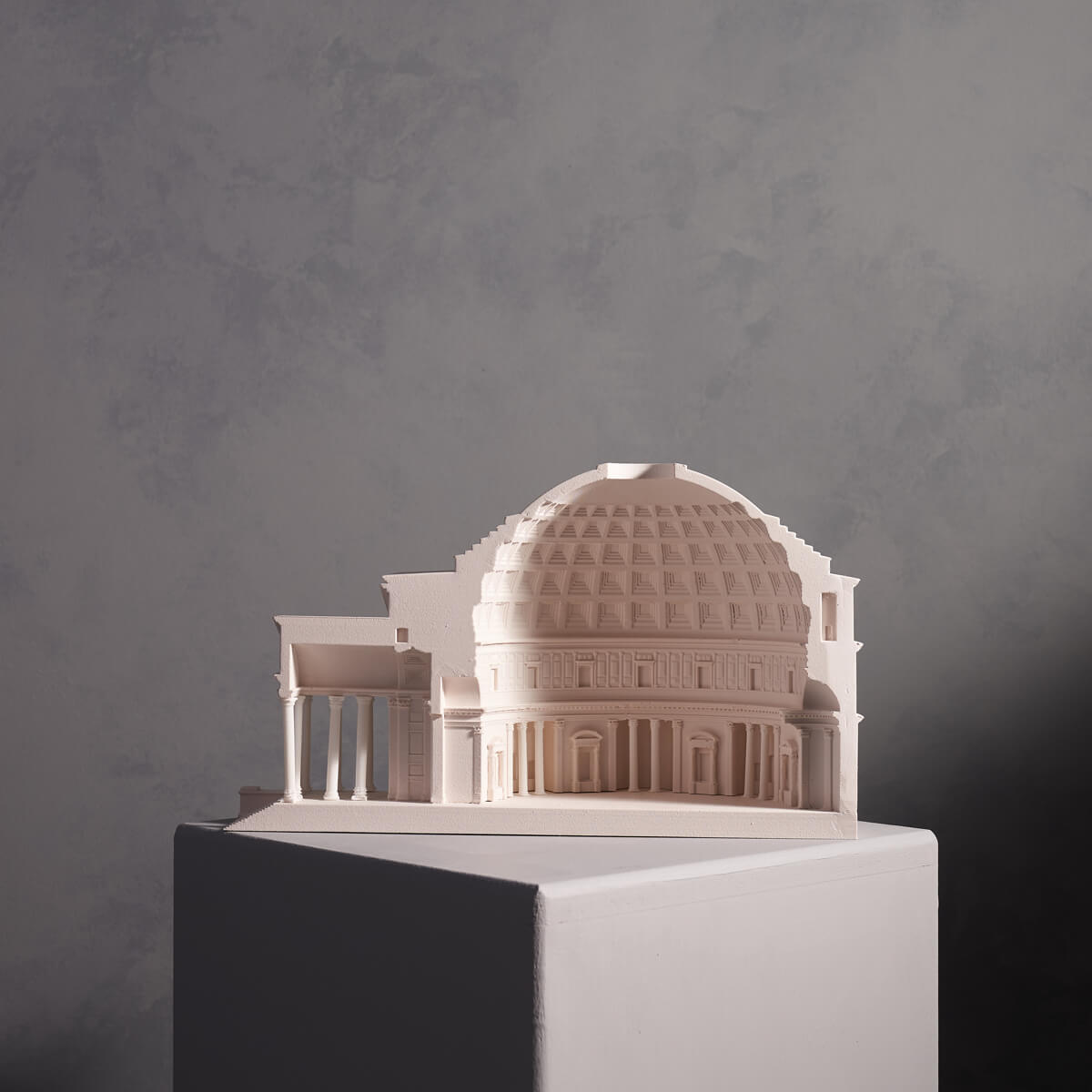 Another Roman landmark, the Pantheon is not only an icon of the ancient empire (the most well-preserved at that) but one of very few buildings with such an illustrious and storied past.

Constructed between 113 and 125 A.D. under the auspices of Emperor Hadrian, the structure was originally a temple to the gods (fitted with sculptures of the deities throughout) and later sanctified to be made into a church before its current iteration as a celebrated tourist site. Though its striking temple front is supported by solid marble columns sourced from Egypt and capped with ornate corinthian capitals, the Pantheon’s interior is the real attraction. 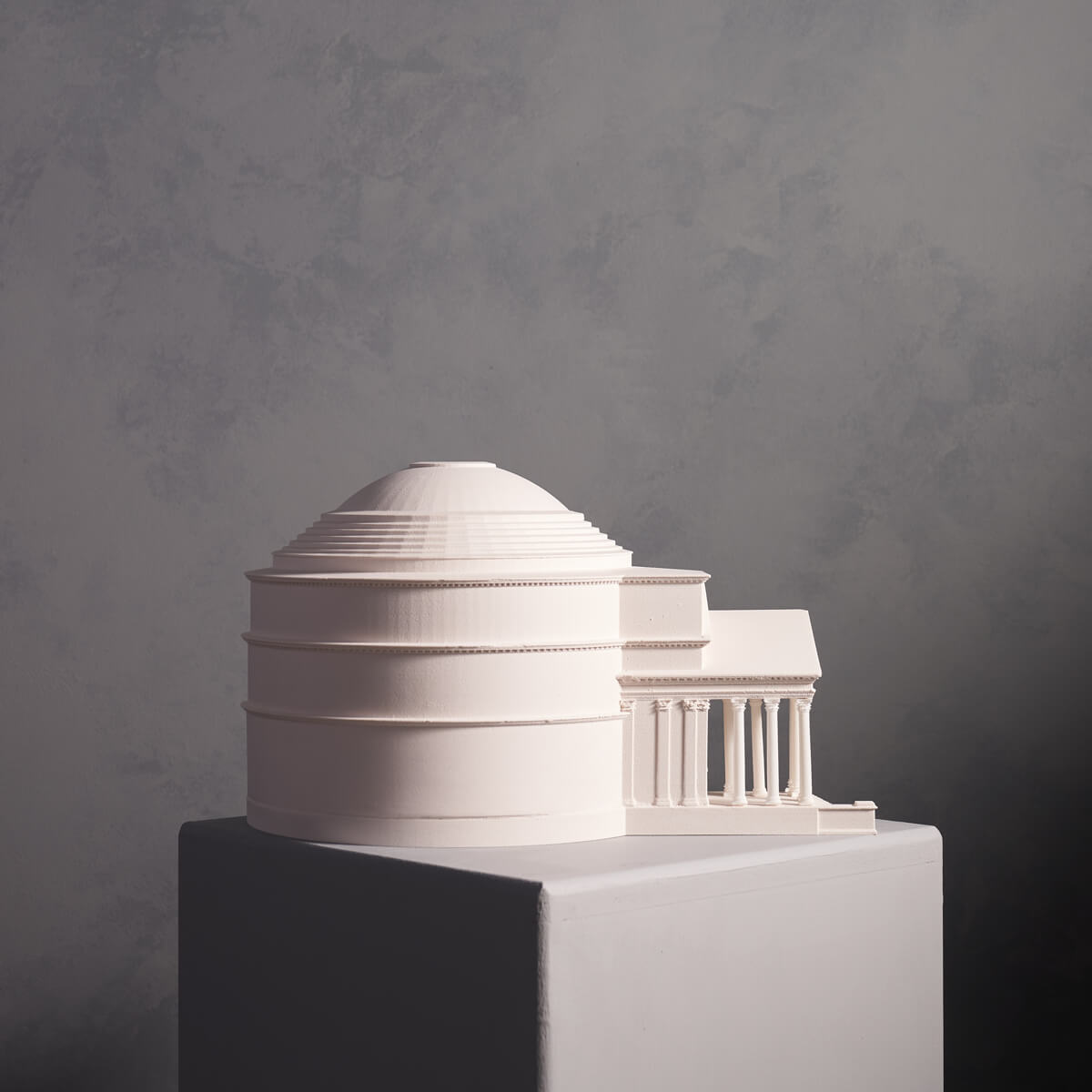 Behind a pair of bronze doors is a vast spherical space that encapsulates the classical world’s interest in ideal geometries. Here, a massive concrete and brick barrel supports a soaring 43-metre-high coffered dome. Lining the walls and floor are inlaid circular and square marble elements sourced from across the Roman empire (a nod to Hadrian’s expansive control). Perhaps the most striking feature, however, is the imposing oculus, which ushers sunlight into the 1,520-square-metre interior while also tracing the movements of the sun across the dome, barrel and floors during the course of the day. “It’s about the earthly sphere meeting the heavenly sphere,” concludes art historian Beth Harris of the building’s connection to the celestial bodies.

The Pantheon is also one of the most celebrated and replicated structures in architectural history. Traces of its design can be found across the world from Paris to Charlottesville and, with Chisel & Mouse’s detailed 13-by-21.5-centimetre section model, even your home.

Known for its detailed plaster replicas of cityscapes and architectural landmarks, the British studio has released a trio of new models with stories to tell.