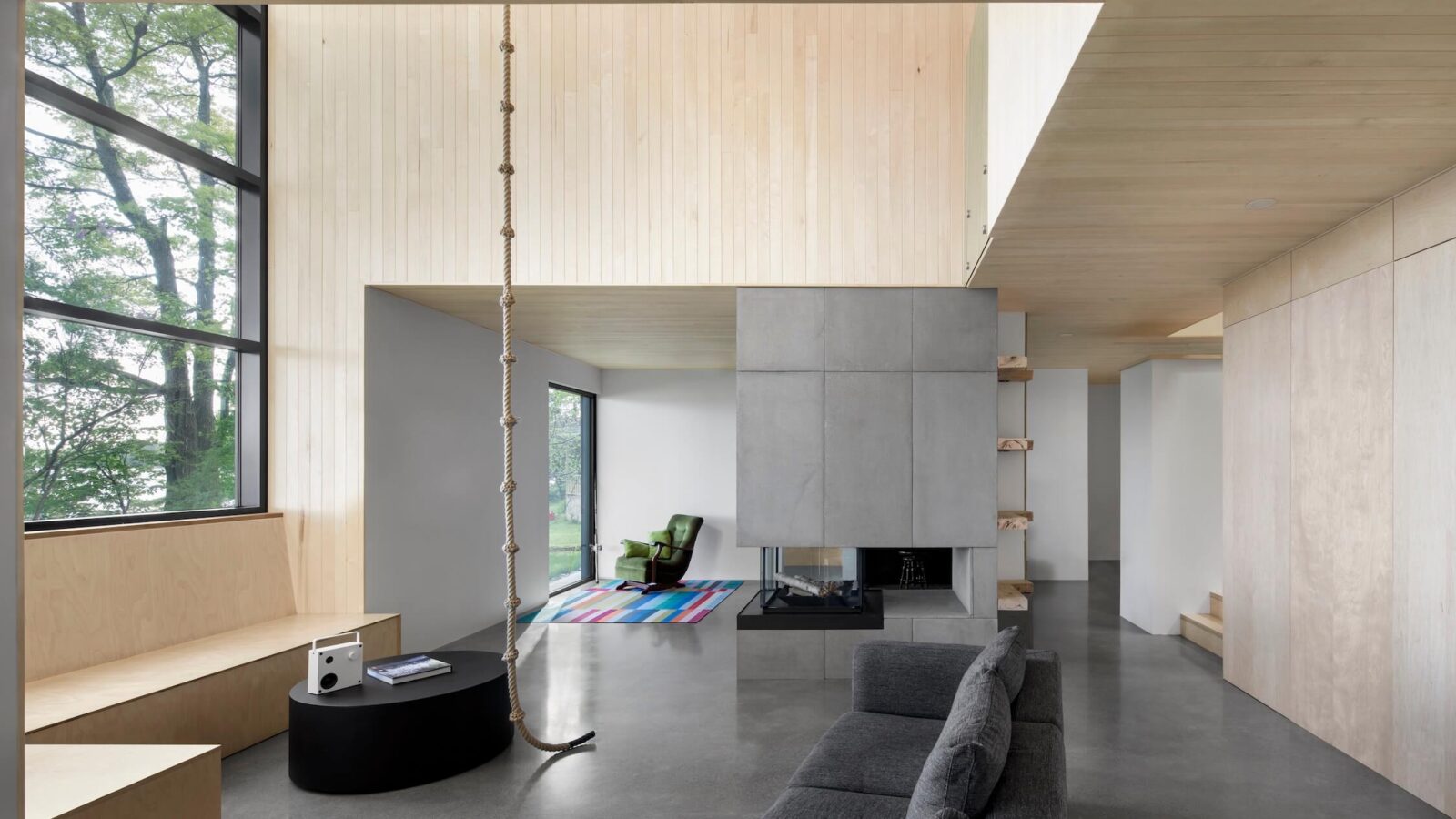 Located in Quebec, the house plays with an archetypal form – but injects a whole lot of fun into it.

What’s immediately striking about a new lakeside cabin in Quebec’s Eastern Townships, by Montreal’s Atelier Schwimmer, is its subversion of form. From certain angles, its shape conjures the archetypical pitched-roof abode, complete with charred-larch cladding. Then an entrance comes into view, its massing sliced to create a cantilever over a narrow terrace lined in blond wood. Wrapped in glass, this covered corner is actually one of three distinctly dramatic entrances – there is also a loggia at the front and another at the back of the house. The interior, which is boldly visible from the outside, also hews to the classically modern. It features blond millwork, carved, intersecting planes and majestic openings that bring in beautiful views. Then there’s that climbing rope, hanging from the ceiling.

Felix Schwimmer, who designed the almost-300-square-metre cabin together with Francesca Fiaschi, explains that the house was created for two brothers who co-own a marketing company. “One is more artistic and the other more pragmatic. The artistic brother led the project coordination with me. His knowledge of both the creative process and construction, combined with his trust in my work, made it very fun.” Both siblings enjoy the great outdoors and all it has to offer, from skiing and snow-shoeing to fishing.

The design process was collaborative. “I did a few handmade sketches to get a feel of the clients’ desire and of the topography. The initial phase was about getting to know each other – I like to understand the lifestyle. So instead of asking about the required spaces, I want to analyze what they do, how, with whom, their past and present activities and their aspirations for the future.”

The site logistics were another story altogether. Lake Cabin is situated among neighbouring homes on Lake Brome, on a plot that the family has owned for a long time. (The project entailed demolishing an existing building that had been erected without a foundation and was crumbling.) But the firm had to adhere to multiple regulations: regarding the placement of the septic tanks relative to the water well; the home’s proximity to the lake; and even how to access the site, which was complicated by a hill and a parking lot.

These conditions limited the house’s footprint and proposed position. But once they were taken into account, the project took off. “The form was a response to site, views, practicality and passive house principals,” says Schwimmer, who cites summer shade, winter heat gain and insulation.

But the project is also very much centred on the sculpted interior, and its light-filled, triple-height atrium, which, in effect, “cuts the volume in two.” Right in the middle of the poured and polished concrete floor, a tall concrete fireplace anchors this capacious space and delineates its living and dining spaces. Upstairs, a bridge connects four bedrooms. 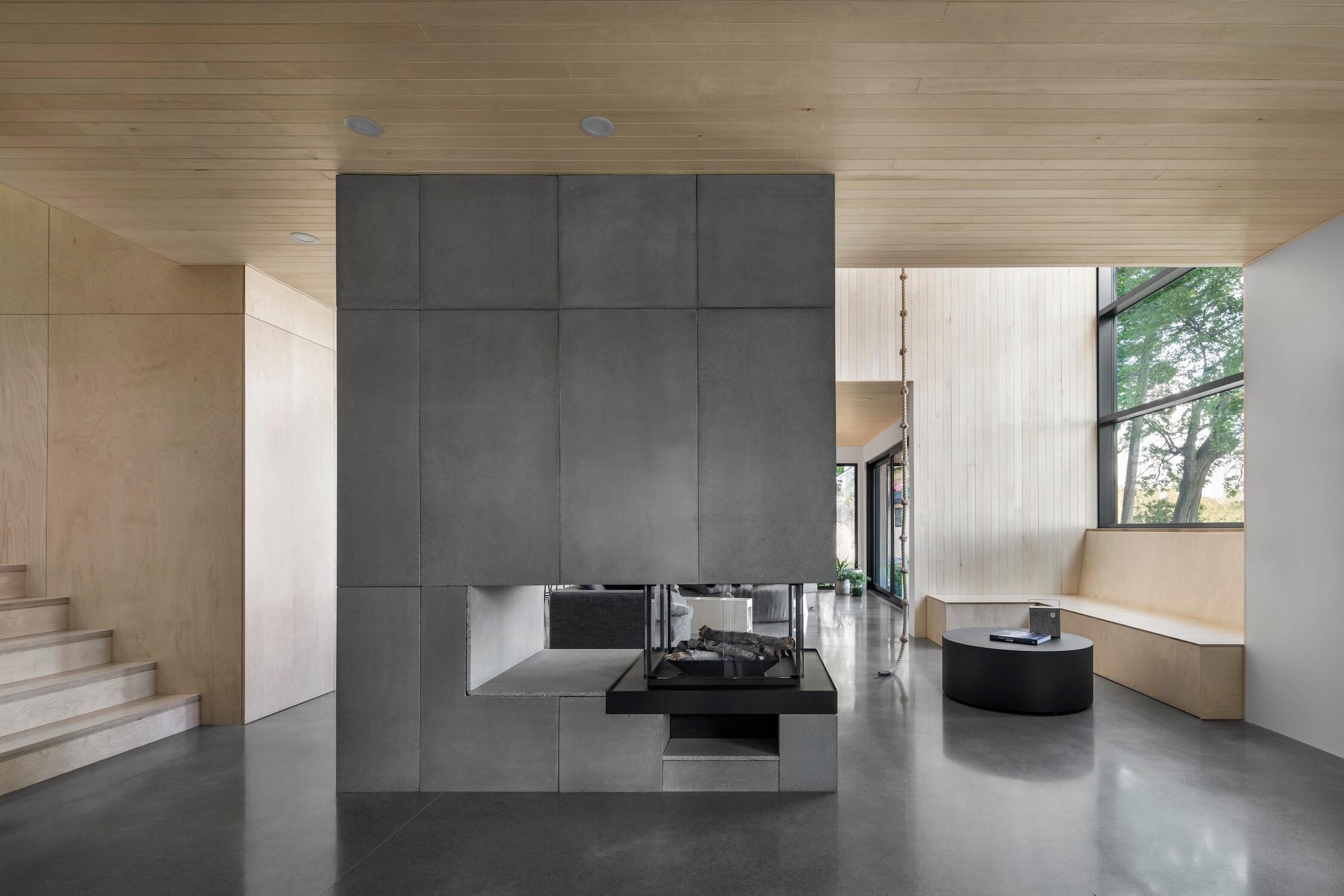 “Everything was custom made,” says Schwimmer, who notes that the concrete fireplace, featuring core elements from the existing, dismantled fireplace, was re-skinned with a smooth-grey slab. “The benches, the staircase, the pantry – even the mechanical room under the stairs – were all designed as ‘a functional block’.”

The one detail that wasn’t the firm’s idea: the climbing rope. “The client added it at the end of the project – they love the outdoors and are very playful. It activates the central living area – everyone wants to try it. I love it.”

Located in Quebec, the house plays with an archetypal form – but injects a whole lot of fun into it.