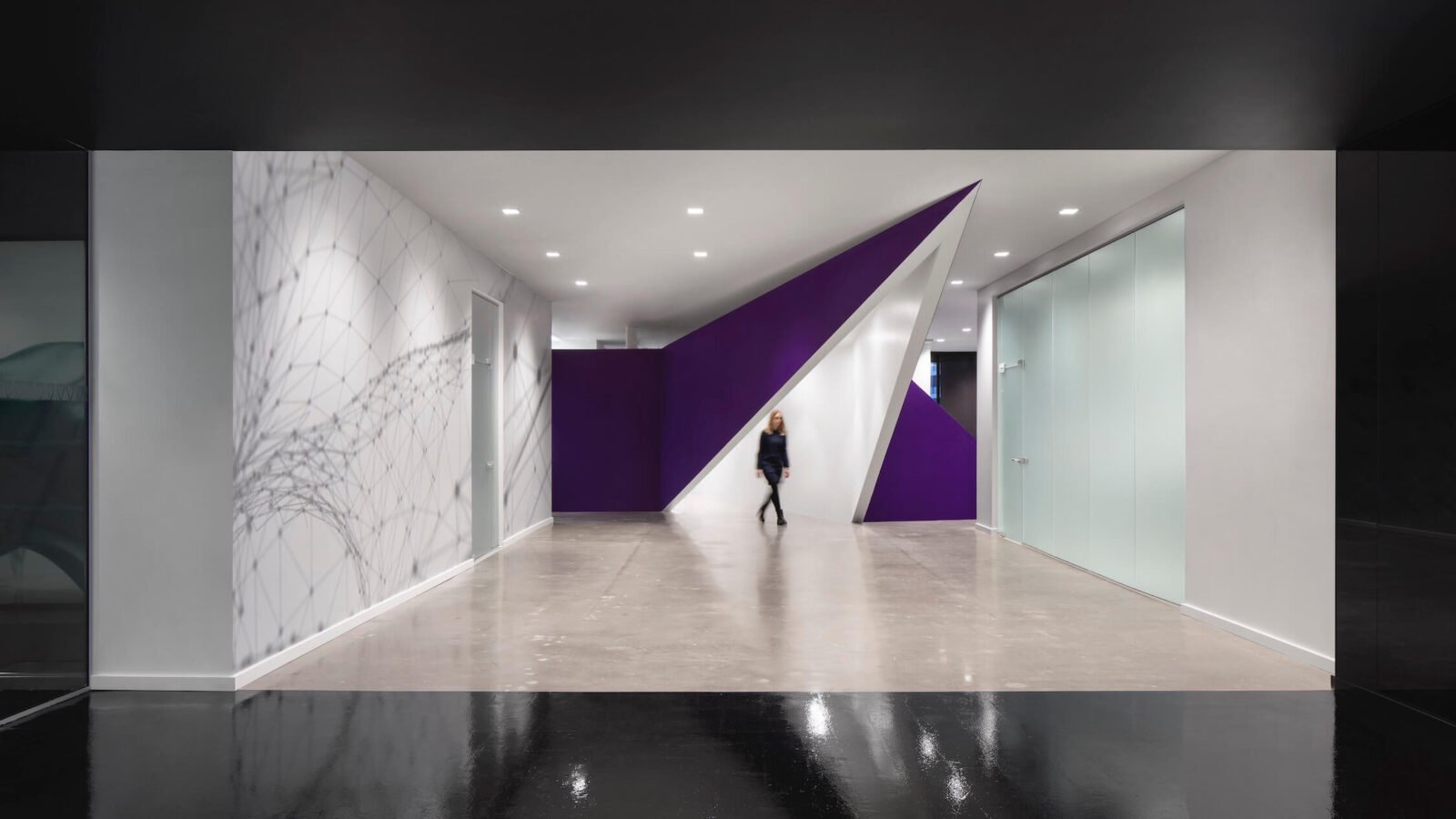 ACDF Architecture looked to the architectural software company’s own tools to devise a vibrant headquarters with an open layout.

AutoCad. Revit. Developed by design technology giant Autodesk, these software suites are (nearly) as fundamental to contemporary architectural practice as the rows of drafting boards and T-squares that dominated studios not so long ago. But unlike their analogue predecessors, today’s drafting tools live only in computers. In imagining the company’s Montreal office, however, ACDF Architecture has created a space that expresses Autodesk’s generative design as a part of the design process – and an aesthetic in its own right.

Housed in an adapted industrial building in the city’s rapidly developing Griffintown neighbourhood, Autodesk’s new Canadian headquarters is accented by a bold interplay of sharp angles and vivid colours.

Spanning two storeys and over 3,700 square metres, it houses some 200 employees in an open layout, alongside a series of private offices, meeting rooms, breakout areas, a game room, a media gallery and multi-functional event spaces.

Tasked with creating a space to represent the brand, ACDF began by scanning the floorplate using Revit to create a detailed 3D model of the building’s rooms. The scan helped the designers to minimize interior demolition, preserving existing partitions to reduce the project’s carbon footprint.

“We made some of the existing spaces work for them, and then we designed some new spaces that are the heart and soul of the project,” explains Veronica Lalli, architect and project manager at ACDF. “For instance, we were able to preserve a large portion of the enclosed rooms on the main floor, which now serves as their service block, addressing their needs in the space.”

According to a release describing the project, the design team used the functions of AutoCad as an inspiration for the design. “They embraced the concept of generating architectural shapes, and then morphing them to create volumes using control points and Autodesk ‘digital modifying commands’,” notes the release.

While the sharp volumes lend the space a distinctly kinetic energy, colour was used to underline an individual identity for each work zone. To create a sense of separation between quieter work zones and communal areas, ACDF applied transparent glass – occasionally paired with a layer of translucent film – to divide spaces while maintaining a sense of openness. Throughout the office, each corridor leads to a different object and colour scheme, with six colour zones spread across the two floors.

“The idea was to create a flowing space where, in any corridor, you can turn to objects and colours to reference where you are,” says Lalli. “We didn’t want people to find themselves in an unrecognizable spot on the floor plan, not being able to situate themselves, which is something that often happens in open layout offices.”

ACDF Architecture looked to the architectural software company’s own tools to devise a vibrant headquarters with an open layout.