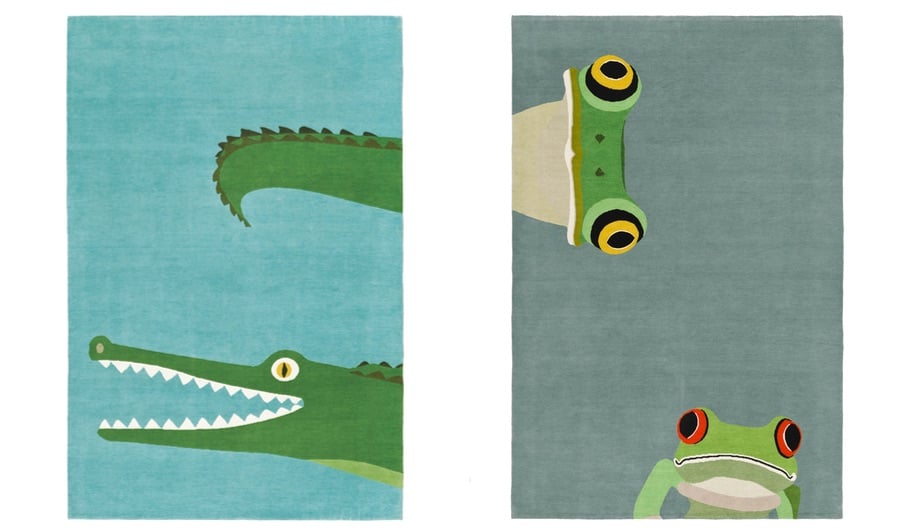 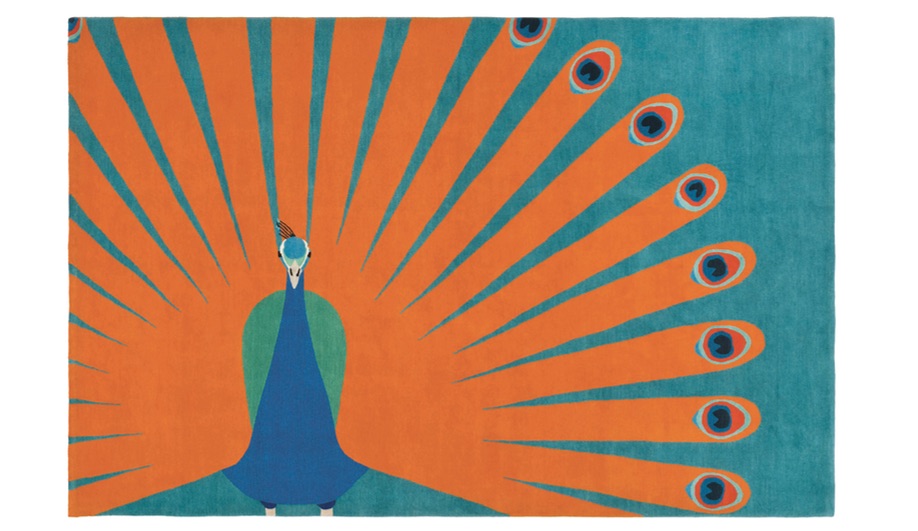 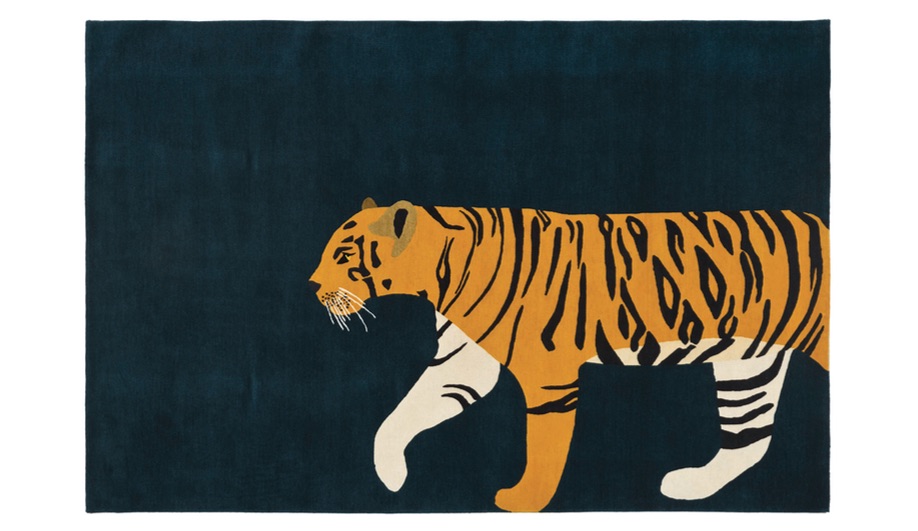 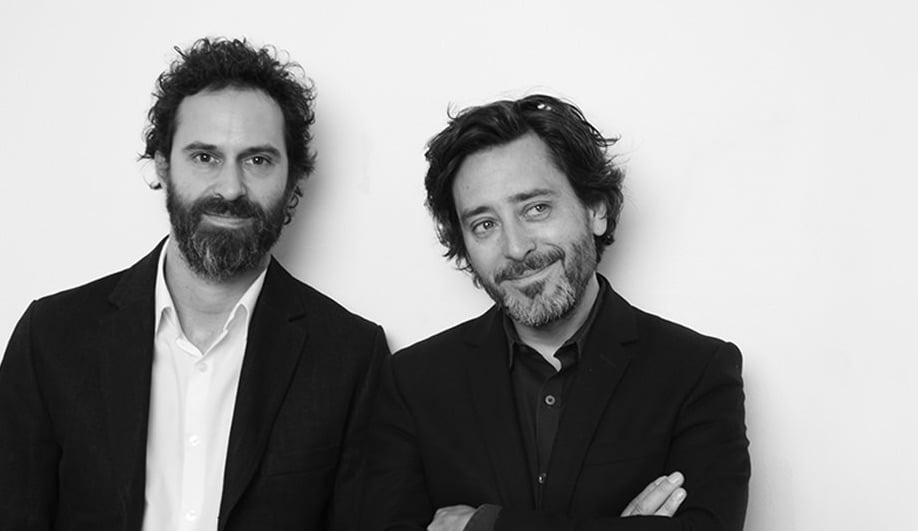 Azure: How did this collaboration come about?

Jay Osgerby: It started about 10 years ago when Ed Barber and I designed Stella McCartney’s first store. We had designed hexagonal ceramic tiles for the interior – the first thing that we had done that was in any way decorative or graphic. Chris had seen it published and gave us a call and said “I really like what you’ve done, this could be the start of a rug. Are you interested?” That’s when we met, and we became friends pretty quickly. And since we only really work with people we like, we started a collaboration.

AZ: Is that how The Rug Company typically finds collaborators?

Christopher Sharp: We’re always on the lookout for ideas. For us, the idea is more important than the person. And we’re always trying to add to the collection in an interesting way, trying not to repeat ourselves. To produce a rug takes a couple of years – it’s a massive investment – so it’s really important to us that everything we do is great work, and adds to the overall collection.

AZ: From hexagonal tiles to animals is quite a leap. How did you move from doing something purely decorative to something so….

JO: Playful? Our studio is based on the idea of never doing the same thing twice. And we thought that while a lot The Rug Company’s collections are incredibly beautiful, they’re very grown up. There was an opportunity to do something that was a bit more playful, aimed at adults and kids alike. I have kids, Ed has kids, Chris has kids – and we thought that there was a gap in the market for something which appealed to everybody.

CS: They started off with one idea for one animal rug, and we absolutely loved it. It sounds bizarre, but this is one of the most challenging projects we’ve done, because to take something which could end up as being kitsch and make it beautiful – with an animal – is difficult. And generally, when we’re doing rugs we’re looking for symmetry, thinking about how it’s going to work with furniture; with these, we’ve abandoned that completely.

AZ: How did you arrive at these four designs?

JO: All of us submit hundreds of ideas, and only a fraction of them ever see the light of day. Along the way, we’ve presented some pretty scary-looking things, which we agreed needed moderating. The tiger was initially a panther, black on dark blue with a yellow eye –

CS: It was really wonderful – really terrifying. But we imagined children with big bags under their eyes, going to school not having slept.

JO: It was just a bit too frightening. It was difficult to find the balance between too cartoony and too real. Even now, they range; the tiger is more illustrative, while the crocodile is slightly more storybook. We’ve cropped them to indicate the direction of movement, like we’ve just caught them as they’re moving in and out of the frame.

I’ve got a file of sketches a foot high. Then we edit them in Illustrator or in our sketchbooks. Sampling takes four months – to send the artwork out and get it back, look at it again, to get the wool colour right – it’s shockingly complex.

AZ: How are the rugs manufactured?

CS: These come in a fixed size, 230 centimetres by 150. That’s the best size for the purpose – you’re not going to cover it with stuff. It is a piece of art; you put it down and you’re going to want to enjoy it. So it needs to be a size that enables you to do that.

The wool we use comes from the Tibetan plateau, over the mountains in a truck to Nepal where it’s washed in the streams that come off the Himalayas – the water’s icy, icy cold, and as clean as can be. They lay it out to dry so the banks are just covered with wool, and then it goes to Katmandu where it’s hand-spun. Each rug has 20 different people involved in its manufacture. From the time you get the spun wool, it takes four months to make each rug, thereabouts.

If you look after the wool, and keep its oil all the way through its manufacturing, you end up with something really good. These rugs will last 200 years. I say that Jay will be remembered as a rug designer because in 300 years, his rugs will still be around, but his other stuff might not.

JO: The way they’re made also adds three-dimensionality, so they’re not 2D objects. The way the unbleached wool is dyed, you get real variation and movement in it, called abrash.

AZ: How does it feel to get a product in your hands after not working on it or thinking about it for four months – looking at it with fresh eyes?

JO: It’s exactly that. And that’s really healthy, actually. I love that distance – we don’t have that with any other manufacturer. It’s like Christmas, when they come back, because it’s like a gift.

AZ: You said these rugs might be around for 200 years. Does that change the way you approach the design?

JO: No. That’s absolutely what we do on everything we design. That’s one of the guiding principles of the studio, really – everything that we design ought to outlive us.

AZ: As a result this collection feels very timeless.

JO: I hope so. The animals are not overly stylized. In a way, it’s a reductive process of capturing their characteristics. The crocodile strikes me that it could have fallen out of a Kipling book. Currently, it’s my favourite.

CS: I love that frog at the bottom. There’s something so wonderful about him.

JO: You expect his tongue to come out and whip your hair.

SHARE
Twitter, Facebook, LinkedIn, Pinterest, Email
TAGS
Product Design, Q & A,
AZURE is an independent magazine working to bring you the best in design, architecture and interiors. We rely on advertising revenue to support the creative content on our site. Please consider whitelisting our site in your settings, or pausing your adblocker while stopping by.