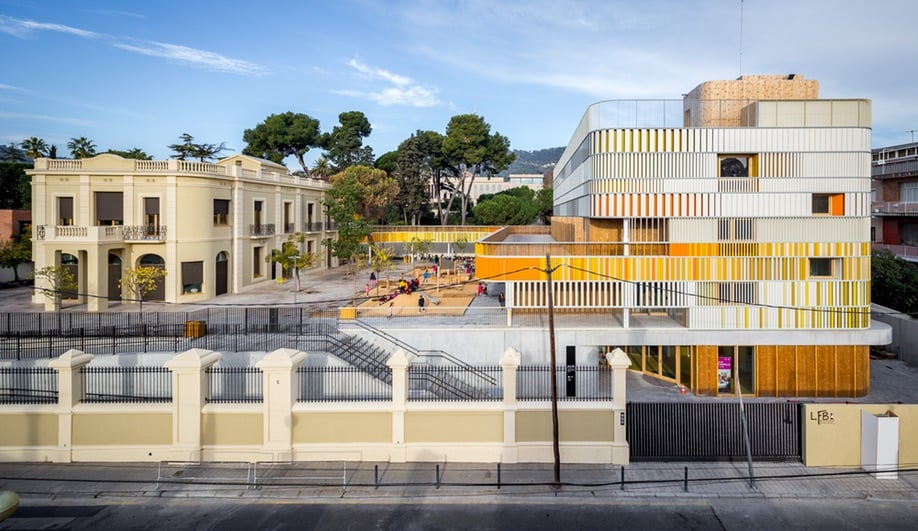 In Barcelona, pre-school students at Lycée Français Maternelle, an international French school, have something exciting to return to: a bright contemporary addition by Madrid / Barcelona architecture firm b720 Fermín Vázquez Arquitectos. 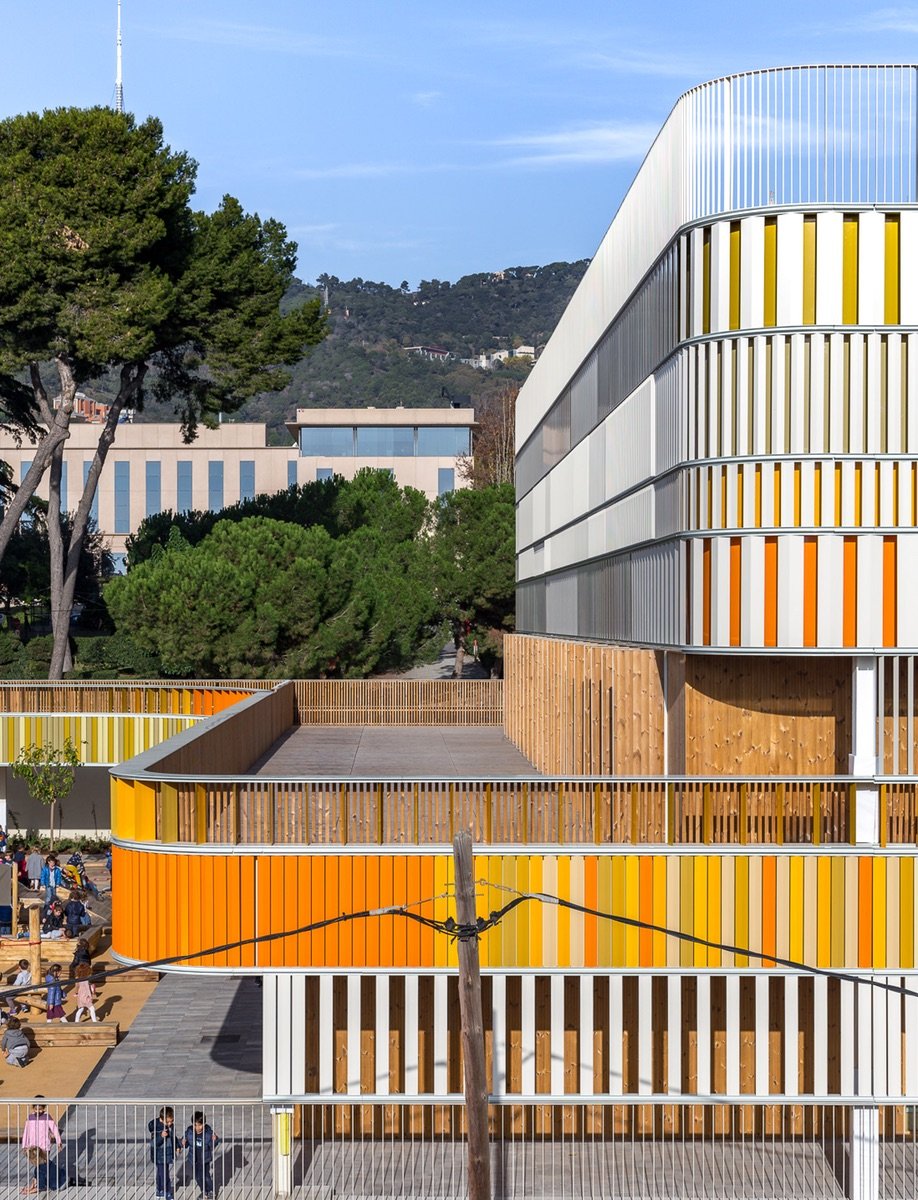 Founded in 1924, the school is operated by the Agency for French Education Abroad. As the institution grew, it struggled to accommodate its rising number of students – and like many schools, relied on temporary buildings to supplement the original academic facilities. So it elected to build a more permanent solution, and the new kid in class is a 3,400-square-metre addition that, in dialogue with the pre-existing buildings, creates an ample courtyard. 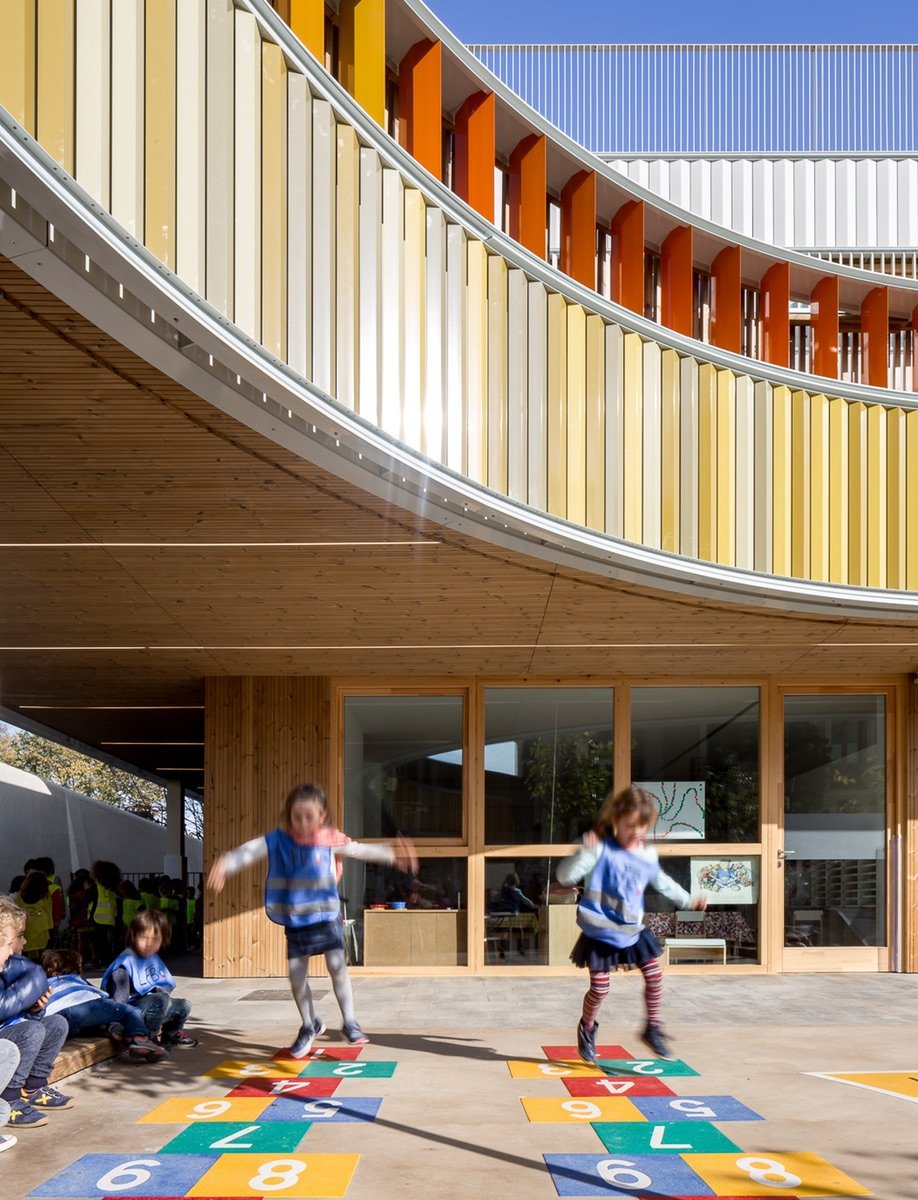 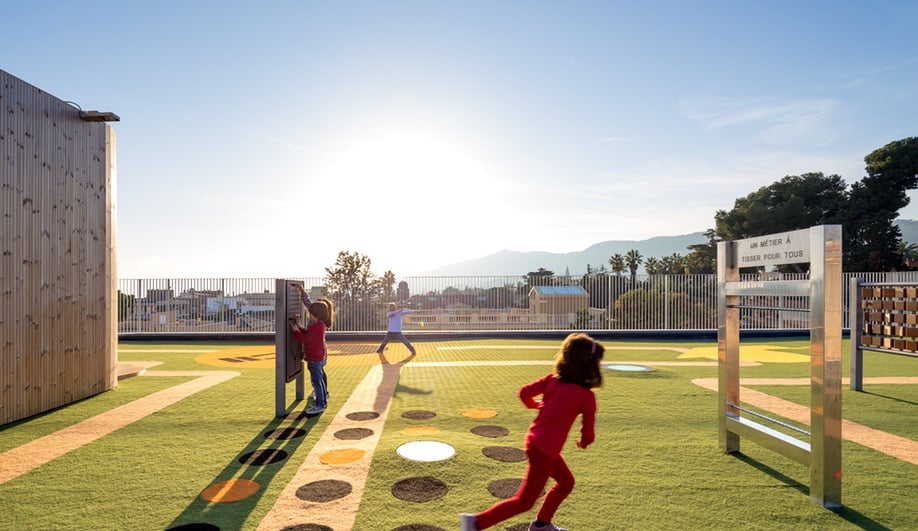 From afar, the curvilinear building is defined by a colourful slatted envelope, which runs around the new building’s perimeter. The steel slats were chosen for their efficiency and durability – they provide insulation and protection from the sun. But, as the firm notes, it also adds an element of playfulness. “The chromatic and proportional [elements of the envelope] are the result of a useful and continuous dialogue with the client, who have a clear will of including colour in the project,” says the firm.

The steel envelope sits atop thermowood cladding by Lunawood, which adds dimensional stability, all-weather resistance and thermal insulation to the building. 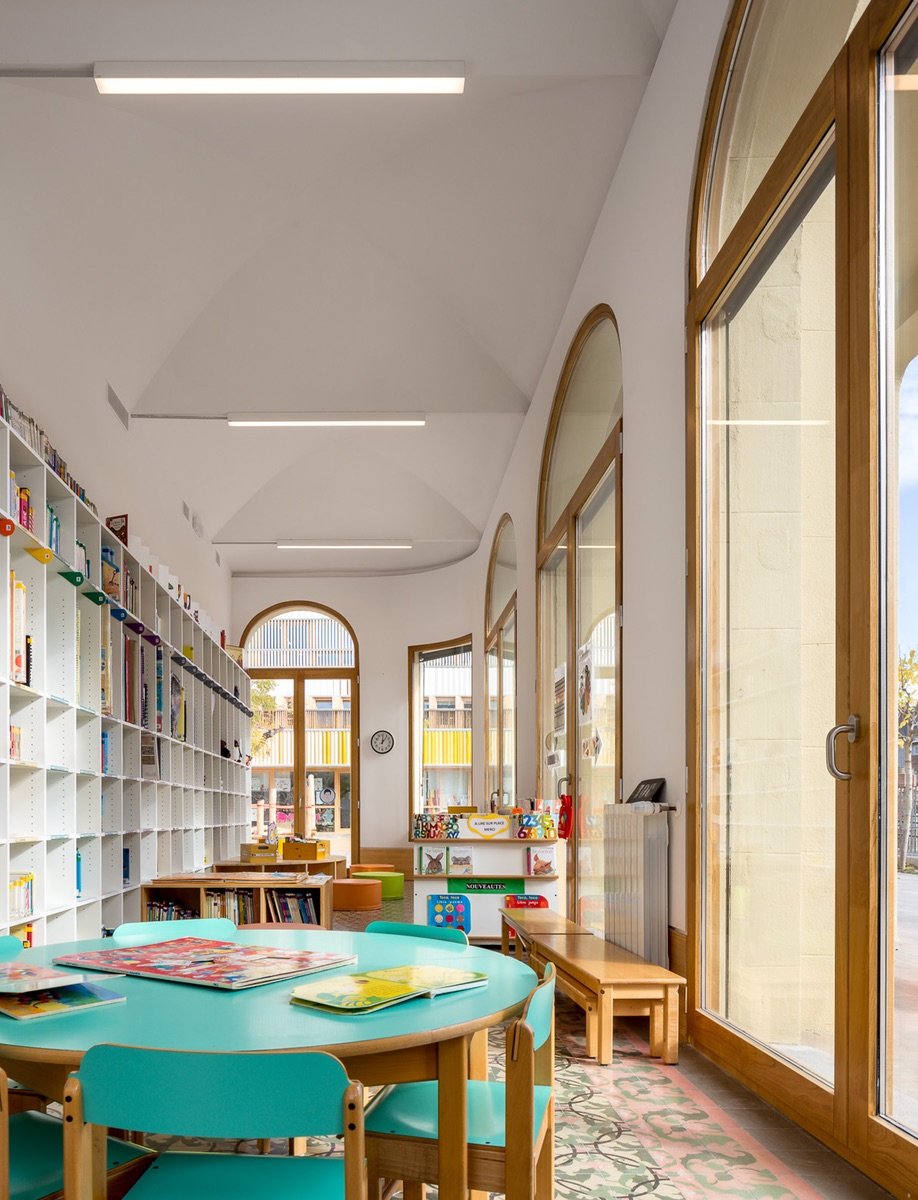 The addition’s squircular form was a nod to Lycée Français Maternelle’s original building. All the classrooms are now contained in the new building – the original early 20th-century villa is now used for administration, a media library (above) and music facilities – which gestures to its neighbour with a ground-level porch and second-storey bridge. 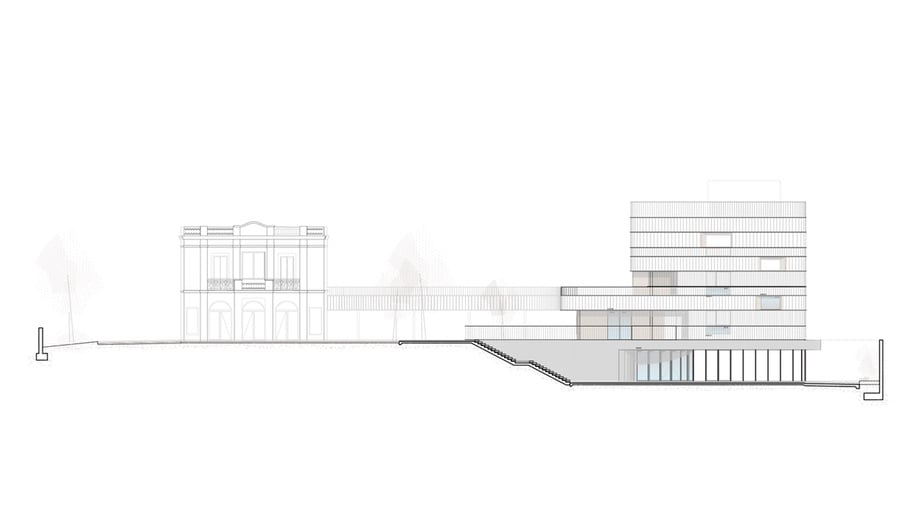 For b720, establishing this relationship was important, but adding contemporaneity was also a priority. “The formal resolution of the new building evokes the volumetric shapes of the villas through the rounding of its corners establishing a formal relationship without necessarily subordinating itself to a historicist imitation,” the firm says. 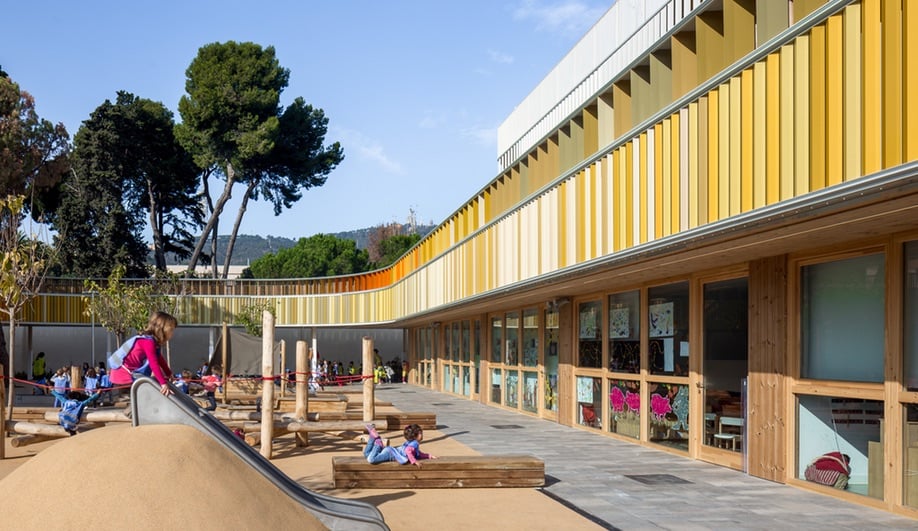 b720, whose three-person design team consists of Peco Mulet, Gemma Ojea, Javier Artieda, responded to the site’s irregular, sloping shape by creating a four-level building with ample outdoor spaces and shading from the elements. A basement area, visible at the image atop this page, creates an outdoor waiting area for families and children.

A set of stairs (or ramp) rises to its ground level, which lines the playground / garden area with light-filled classrooms. From here, the building steps back, simultaneously creating shaded areas on the ground level and a generous terrace on the second storey. The final two storeys contain classrooms, with the building topping out with a rooftop garden. In the project drawings above, the rooftop is demarcated for study of flora and fauna – depicted adorably with a snail. 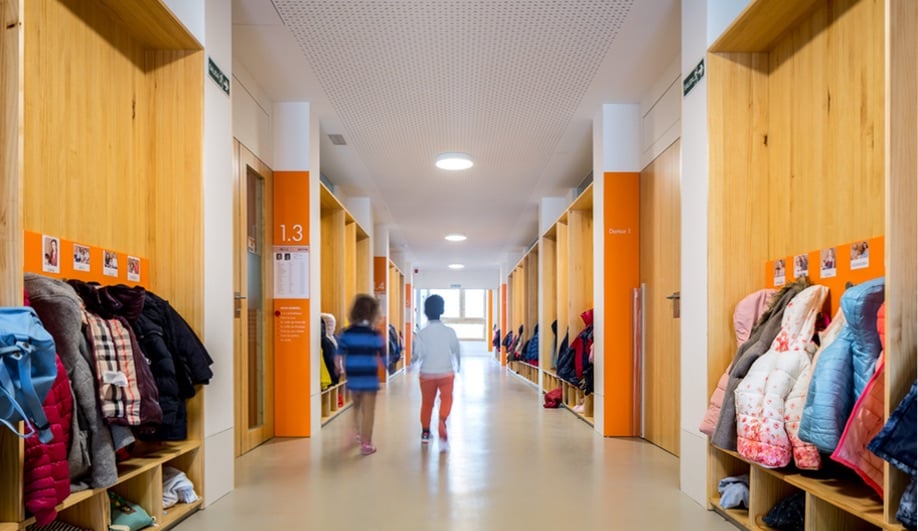 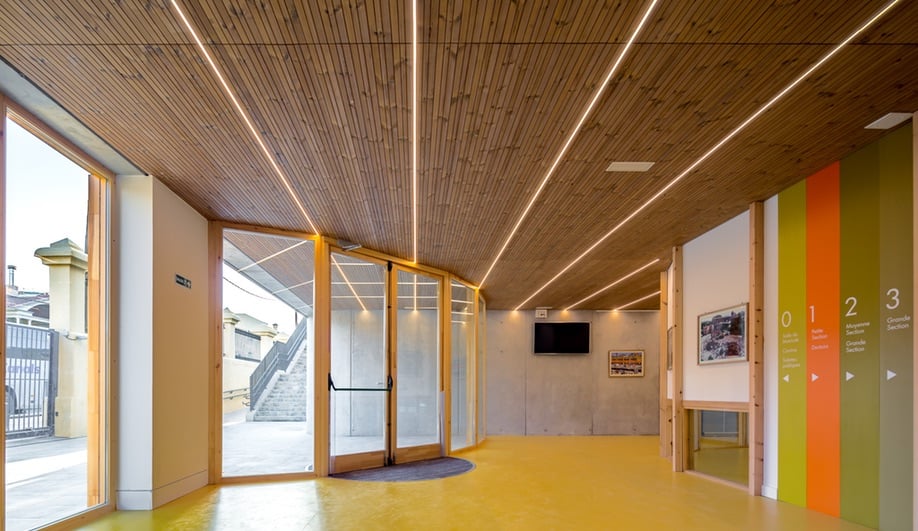 Inside, the bold oranges and yellows of Lycée Français Maternelle’s steel envelope are repeated, ensuring visual consistency. These colours can be found in flooring and wayfinding elements; the pale Lunawood palette is repeated here, too, in the building’s ceilings, which are lit by LED strips.

The result, the firm says, is a “visual and programmatic relationship” that pays homage to site’s history – while infusing a liberal amount of pre-school playfulness. Welcome back, students. 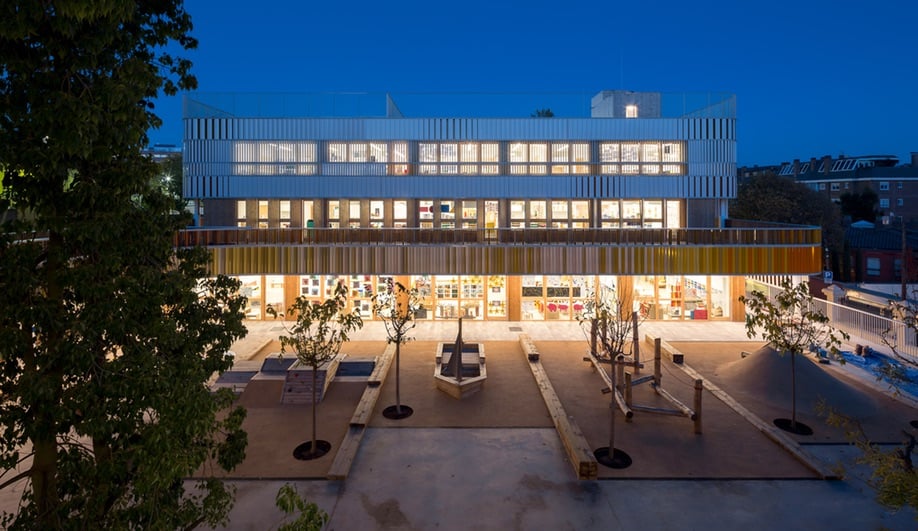