The 10 Brightest, Boldest and Best Ideas of 2018
Big ideas can change the world - and so can small ones. Here, Azure's editors select the concepts that stood out in 2018, including tiny wind turbines, pop-up parks and air-filtering textiles. 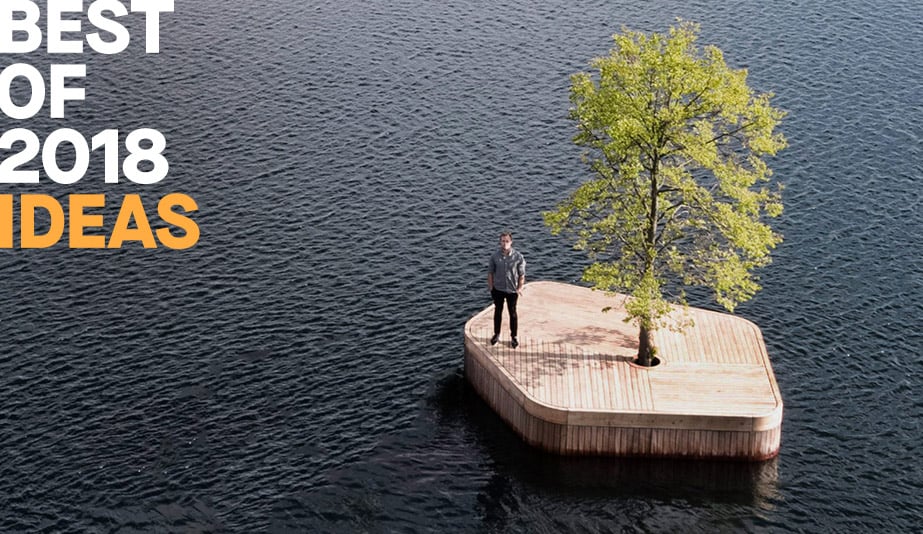 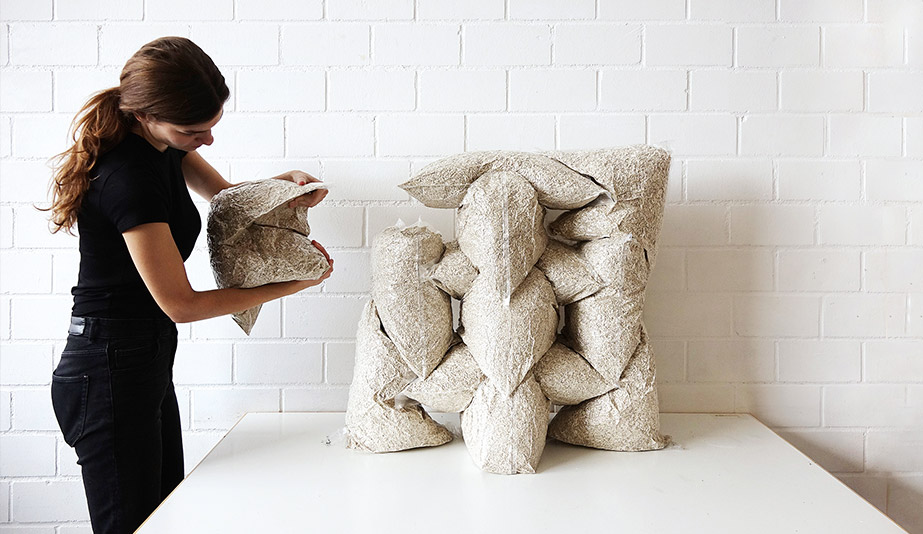 We see a lot of exciting new approaches to materials and building processes, but one in particular really grabbed our attention this year – and that of our 2018 AZ Awards jury, which recognized it with the A+ Student Award. Tangible Formations by University of Stuttgart students Kyriaki Goti and Shir Katz is an ingenious system of building blocks that relies on little more than wood chips, clear plastic bags and granular jamming (a process that applies vacuum pressure to convert loosely packed particles into a sturdy solid module). AZ Awards jurist Claire Weisz pointed out how the idea explores the “potential in looking at things that are generally hard, and then imagining them soft.” 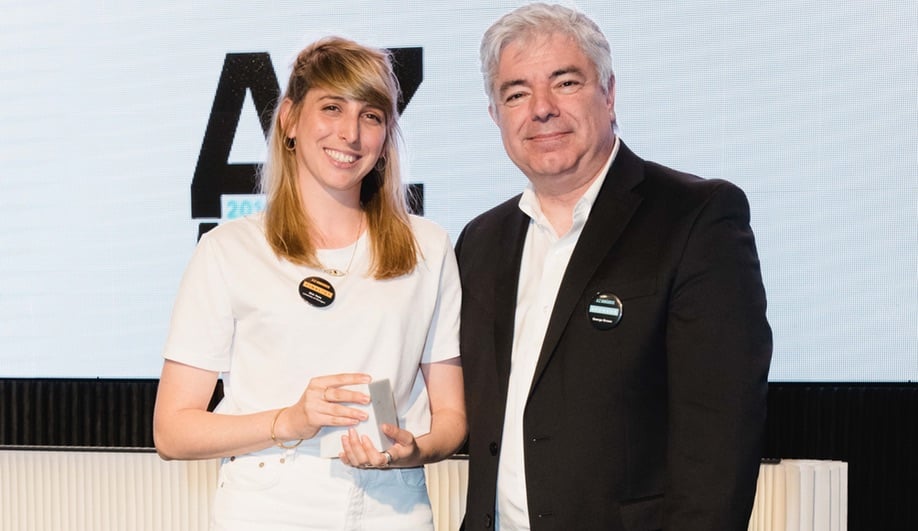 Shir Katz, picking up the A+ Award from George Brown’s Luigi Ferrara, for her and University of Stuttgart classmate Kyriaki Goti’s Tangible Formations project

While in a supple state, the material can be squeezed, twisted and mashed to achieve a wide variety of shapes. Then, once vacuum-sealed, the pieces can in turn be locked together to form walls, arches, cantilevers and more. The duo furthered the process by scanning the formations using a hand-held HTC VIVE controller to develop an accessible digital archive of possible geometries.

Why we like it: While rethinking and repurposing waste material is not new, Tangible Formations elevates the idea by presenting a fully formed and well-thought out system that even non-professionals could use. 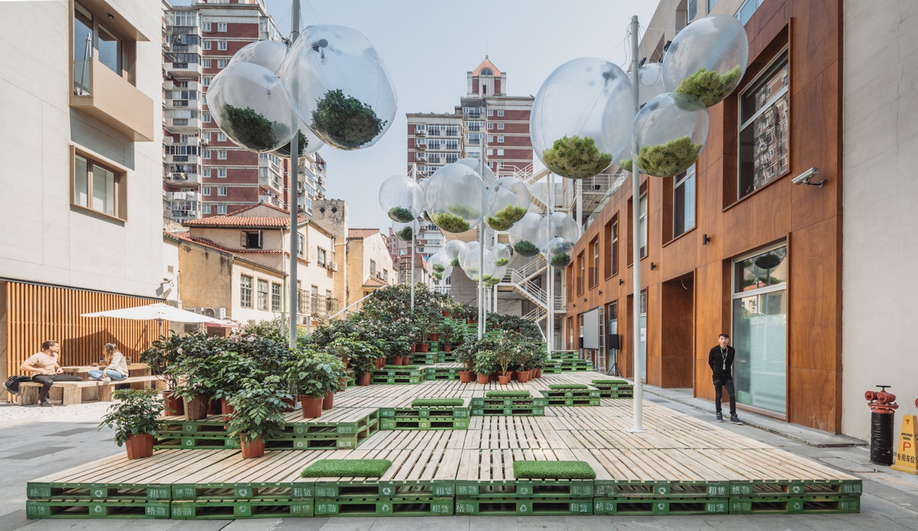 Public parks are massive infrastructure projects. But on Shanghai’s bustling Anfu Road, AIM Architecture and Urban Matters proved that green space needn’t be so complicated with Urban Bloom, a pop-up park made entirely from repurposed city waste. Like traditional parks, the project features a rolling topography, a green canopy and ample space to gather. But unlike traditional parks, the 330-square-metre Urban Bloom sprouted in a vacant parking lot, activating unused space between offices and residential buildings. 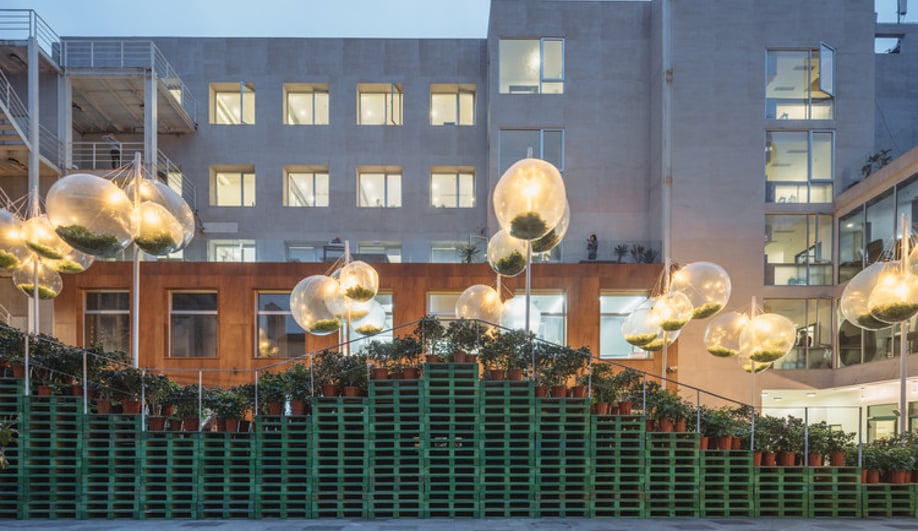 Here, the undulating landscape is made from stacks of discarded wood pallets, the shrubbery is assembled from potted plants and the canopy is made from foliage-filled balloons. It’s striking, to be certain, but proof that enjoyable, flexible urban spaces can be erected quickly and cheaply. “Urban Bloom is an experiment in urban space and activities taking precedent over a design’s intention or infrastructure’s needs,” say its designers. “The only need here was for freedom, and the intention is joy.” 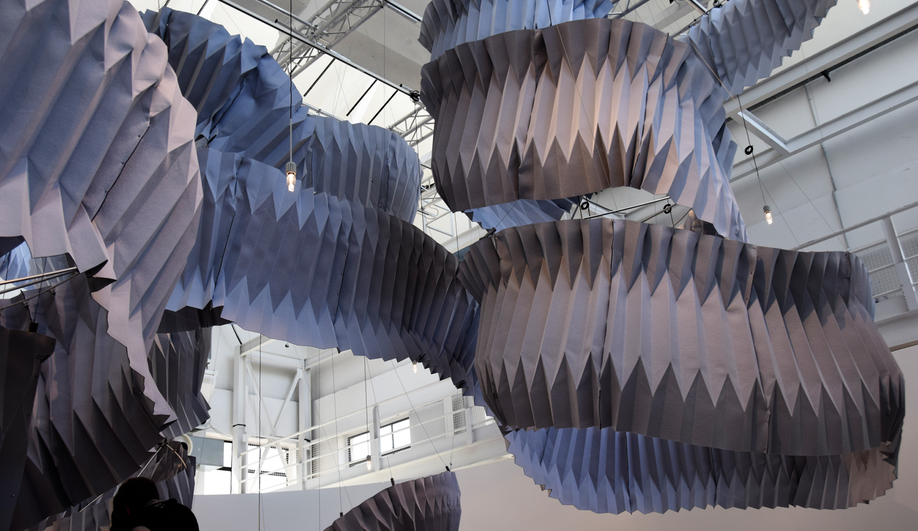 During last April’s Milan Design Week, Japanese architect Kengo Kuma demonstrated a remarkable new technology from Italian startup Anemotech. The Breath is an innovative air-filtering textile that captures molecular toxins and carcinogens. Comprising three layers – including printable, water-repellant and bactericidal surfaces on the front and back and a carbon mesh core that absorbs odours and pollution – the fabric is suitable for indoor or outdoor applications. 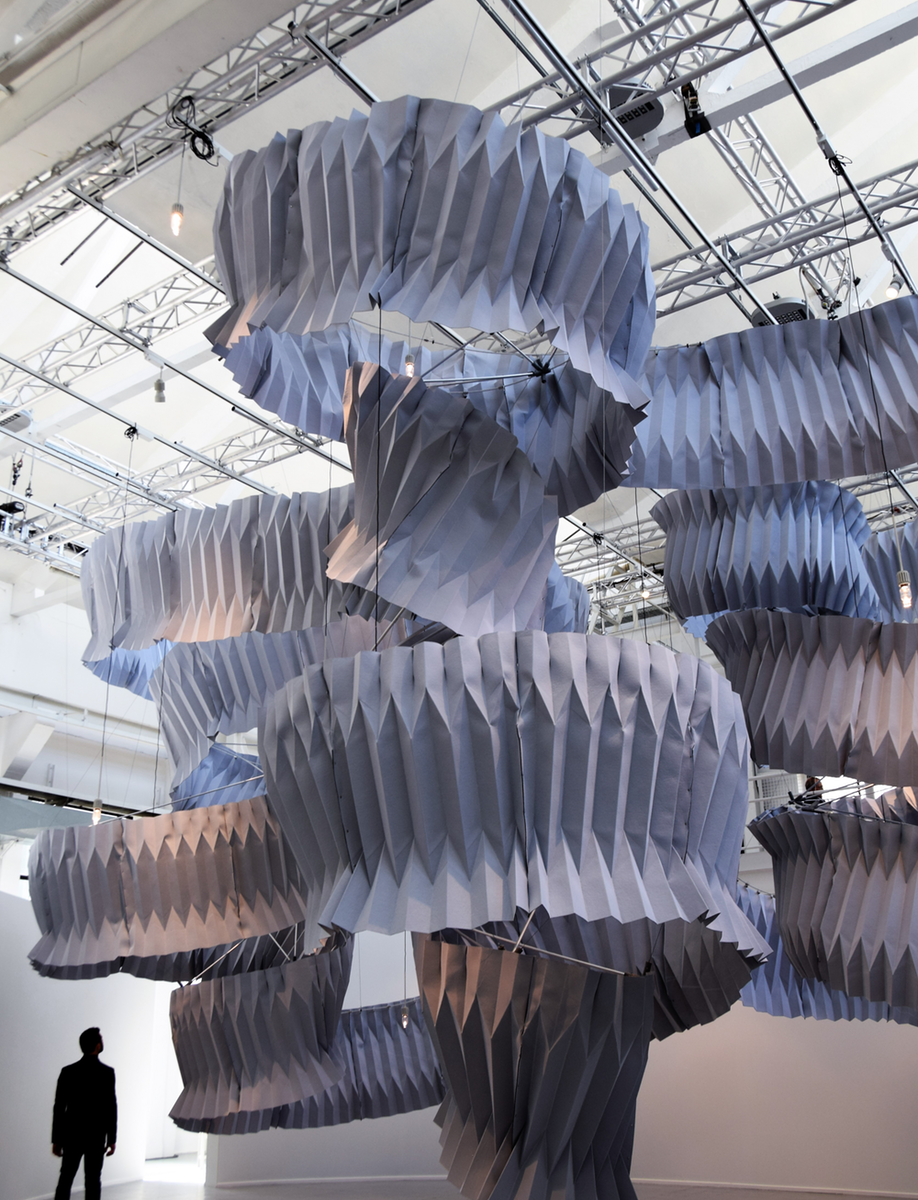 Kuma worked with 3D software company Dassault Systèmes to form a pleated and folded sculpture that maximizes the surface effectiveness. The 175 square metres of fabric used to create the installation could absorb the emissions created by 90,000 cars, over the span of a year.

Why we like it: Clean air is awesome. Until we can design those 90,000 cars right off the road, we will need as many solutions like this as we can dream up. 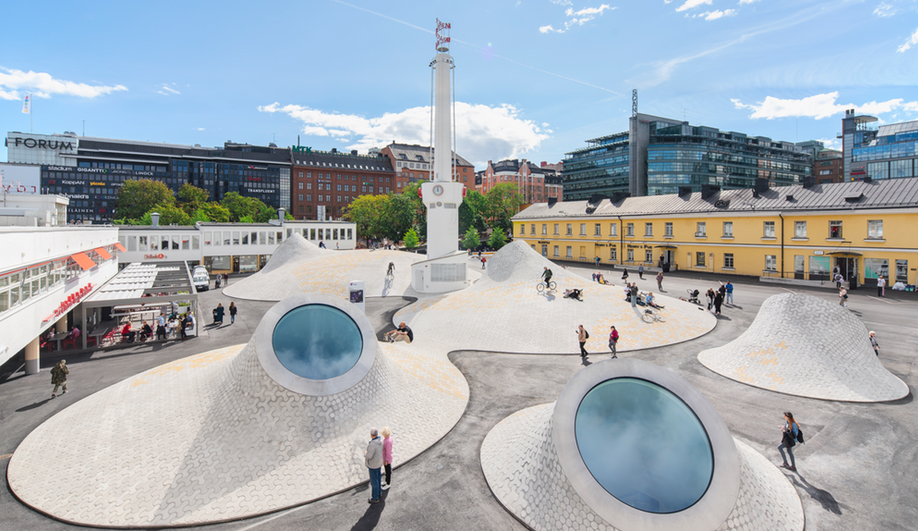 The commission to build a new art museum in the heart of Helsinki came with one major caveat – the land allocated to house the museum, a historically listed former military parade ground, had to remain an unbuilt open public space. Taking the challenge in stride, Finnish firm JKMM Architects dug deep and submerged the 6,230-square-metre gallery below Lasipalatsi Square, topping it with an undulating roofscape punctured by alien-looking skylights. 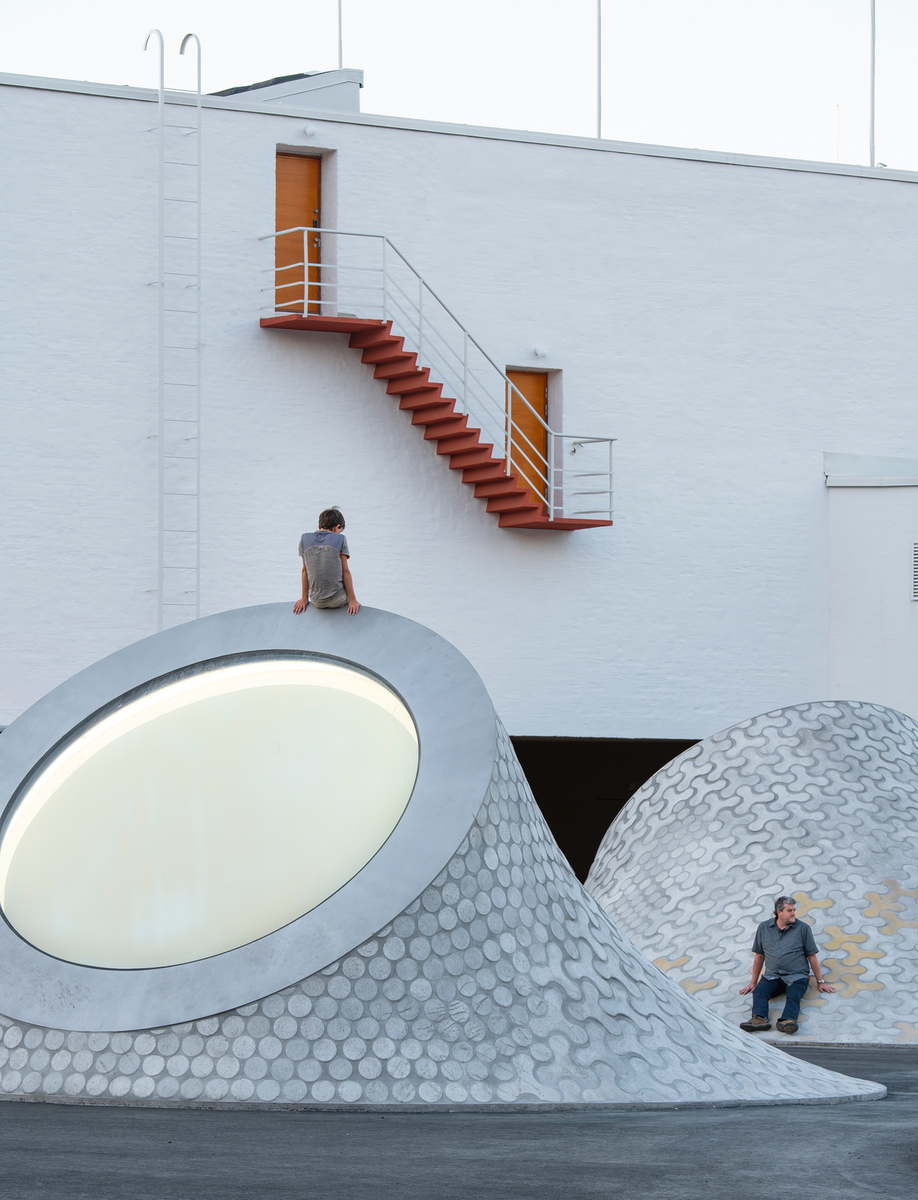 While the main function of the reinforced concrete domed windows is to pull sunlight into the far reaches of the gallery, the firm also transformed the plaza into an offbeat urban park for the citizens, one that maintains the integrity of the historic grounds.

Why we like it: Amos Rex is a brilliant example of rising above building constraints and delivering an adventurous piece of architecture. 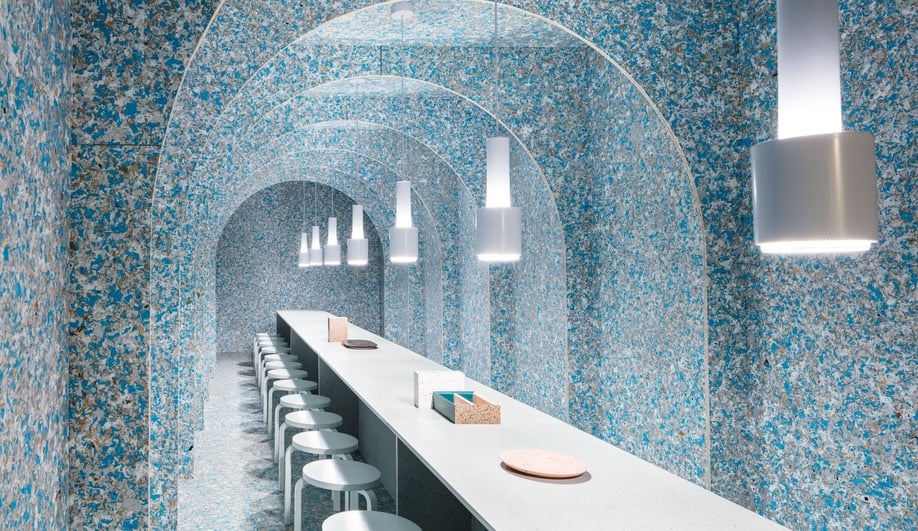 Azure executive editor Elizabeth Pagliacolo described Zero Waste Bistro, on display at NYCxDesign last spring, as “entering the nave of a tiny, minimalist, Scandinavian church.” The compact eatery, which recreated Helsinki’s Nolla in WantedDesign Manhattan using recycled materials, was nothing short of stunning: its arches, made from ReWall (a product manufactured from crushed Tetra Paks), resembled alien marble, and its speckled table, made from Durat (comprising recycled plastic) span the length of the space. The locally sourced menu – featuring black sea bass and oyster mushrooms – was served on tableware supplied by the Finnish Design Shop. And takeaways were packaged in recyclable coffee cups by Kotkamills and sustainable-wood food containers by Sulapac. 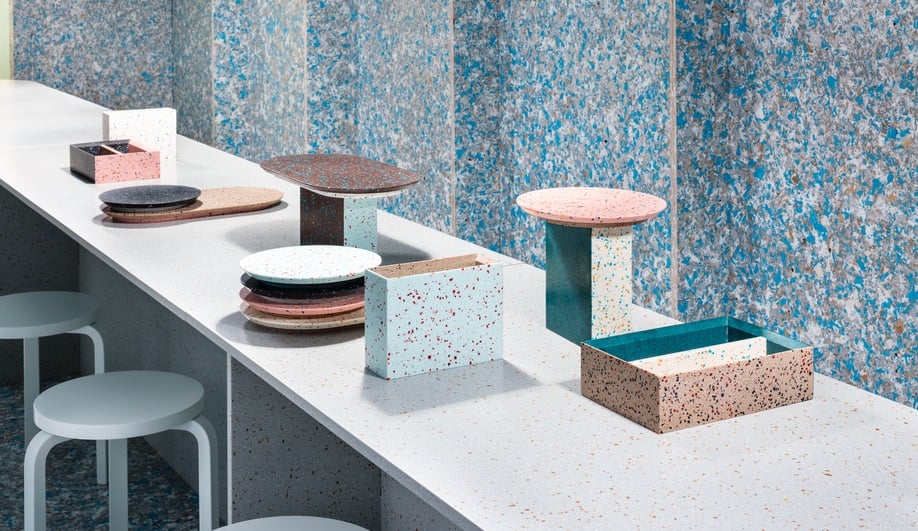 The experience suggested that the restaurant’s philosophy – “refusing, reducing, reusing and (only as the last resource) recycling” – can be extended to food, furniture and even interiors.

Why we like it: Zero Waste Bistro proved that the circular economy can be downright enchanting – and delicious. 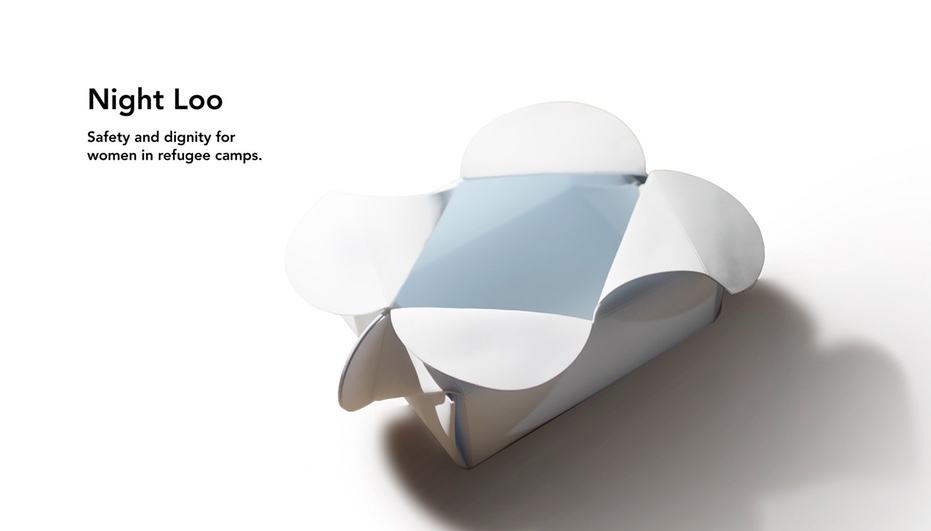 Rape is pervasive in refugee camps. So much so that women and girls avoid using communal latrines at night for fear of being attacked. Instead, they limit their food and drink intake, hold their urine, or pee outside their tents – all terrible choices to have to make. Anna Meddaugh, a student at the ArtCenter College of Design in Pasadena, California, studied the problem and explored a few solutions before coming up with Night Loo.

The reusable silicone loo, which flat packs for easy delivery to camps, features petals that open up to create a splash guard and then close up for easy transport. The product would come with pre-measured packets of super-absorbent polymer, or SAP, which absorbs both liquid and odour, basically turning urine into a powder. In this way, it allows a user to wait until daylight to dispose of their waste at the communal latrine. The project was named a national runner-up in this year’s James Dyson Awards, and Meddaugh plans to start making the prototype a reality: “My goal is to work with refugee-serving agencies (such as UNHCR) to distribute to as many women as possible.”

Why we like it: We especially appreciate the design’s intentions to preserve dignity and protect from harm as well as its very necessary aim to be practical and simple to use. 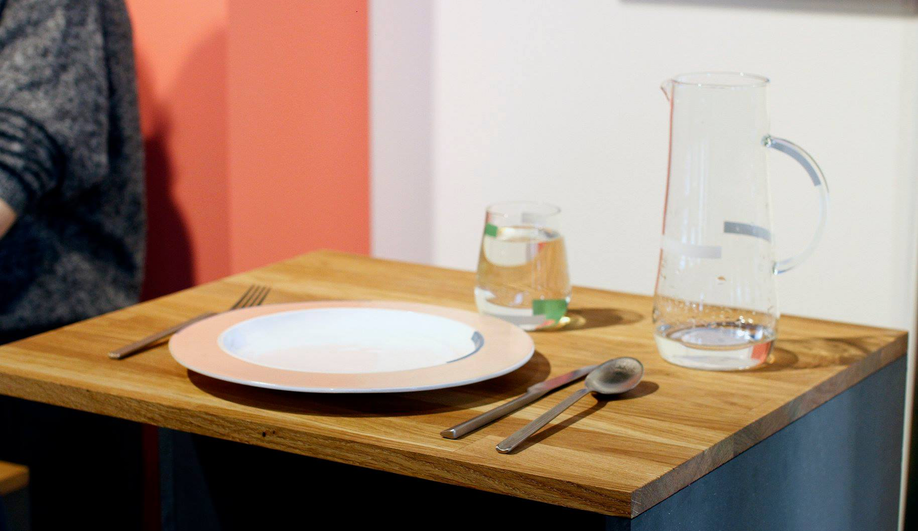 Technology for the visually impaired is continually evolving, becoming more sophisticated, powerful and discrete. See-Eat-Through, a tableware set created by Aurore Brard and presented at Dutch Design Week, a reminder that the best design solutions are often breathtakingly simple. The Design Academy Eindhoven grad created a set of dishes, jugs and glasses designed for people with impaired vision and tested it at Eindhoven’s Oogcafé with assistance from people with between 0 and 30 per cent vision.

Some pieces, like cutlery, are defined by ridges and tactile markings, while ceramic dishes and glasses use bands of colour to contrast against white or clear surfaces. The effect is most dramatic in the jugs and glasses: when water is poured, the coloured strips activate, appearing magnified.

Why we like it: It’s a simple solution to a complex problem. That, and like Emilios Farrington-Arnas’ Maptic, it’s both beautiful and discrete. 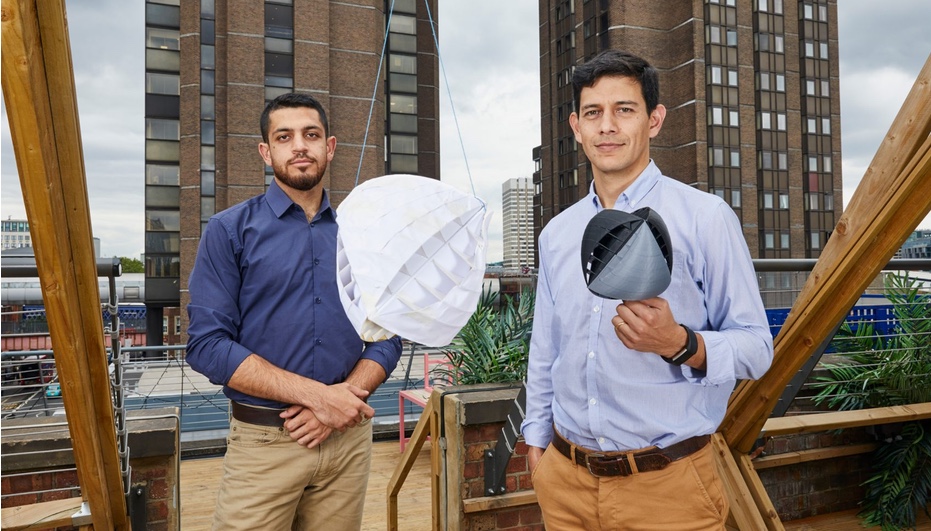 The O-Wind Turbine promises to provide a way for urbanites to generate their own electricity. Developed for “apartment-dwellers,” the prototype by Nicolas Gonzalo Orellana Olguin and Yasneen Noorani of Lancaster University, in the U.K., was named the international winner of the James Dyson Awards (a font of brilliant, problem-solving designs). Inspired by NASA’s efforts to engineer wind-driven balls for Mars exploration, and taking its shape from alveolar kites, the multi-faceted polygon is lined with vents that allow air to exit and enter.

Propelled by cross-winds from both horizontal and vertical directions – the “O” stands for omnidirectional and refers to the unpredictable winds in cities – this polygon rotates on a single axis to power a generator. It all sounds very complex, yet, like all good design, O-Wind Turbine combines all of that technology into an attractive and compact package, one that could help feed more green energy into the grid.

Why we like it: This could be a game-changer, finally addressing how wind energy can be harvested in cities. 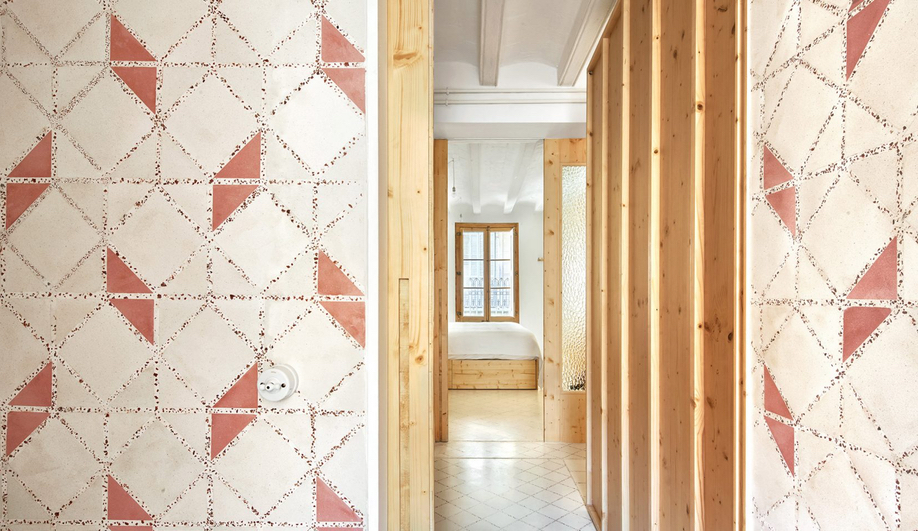 It’s not often you want to stop and admire what’s happening between a floor’s tiles. Grout lines aren’t typically an interior detail to which we pay attention – at least in between cleanings. But TEd’A arquitectes recently used these narrow spaces to squeeze a bit of eye-catching innovation into a residential reno. The clients – who own Spanish tile brand Huguet – loved the character of the home’s original terracotta flooring, but realized it was too damaged to be refurbished and decided to recover the floors, as well as some of the walls, with their own products. 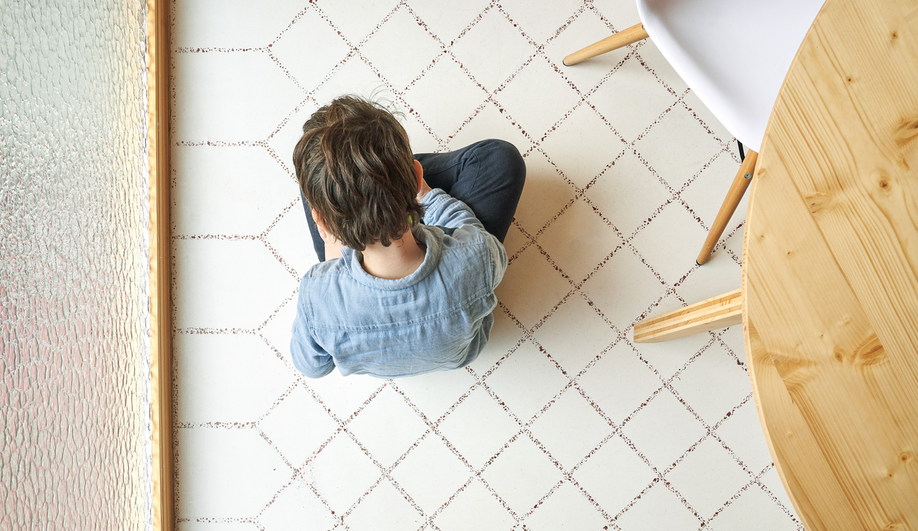 The architects and the Huguets worked together to reimagine the original tile as a new terrazzo grout, grinding them into a multi-sized aggregate and sprinkling it into white mortar. The result is a one-centimetre strip of terracotta sprinkles that add a dash of colour and enliven monochromatic white floors and walls. Why we like it: Sometimes the simplest innovations are the best.

In dense cities like Copenhagen, outdoor public spaces can be hard to come by – an issue compounded by the fact that the city, perched on the Baltic Sea, is crisscrossed by waterways and canals. But architects Marshall Blecher and Magnus Maarbjerg have a solution in CPH-Ø1, a 20-square-metre island made from a recycled wood deck, a lattice of recycled plastic bottles and a Linden tree, chosen for its symmetrical growth patterns.

Along with being a flexible public space – who wouldn’t want their own island for an afternoon? – island modules can be joined in “parkipelagos” and transported, activating under-used parts of the city. CPH-Ø1’s designers say the islands can be used for stages, gardens, saunas and mussel farms. Island life, it turns out, is good.

Why we like it: With sea levels set to rise 70 centimetres by 2100, CPH-Ø1 is a future-forward idea for the coastal cities of tomorrow.