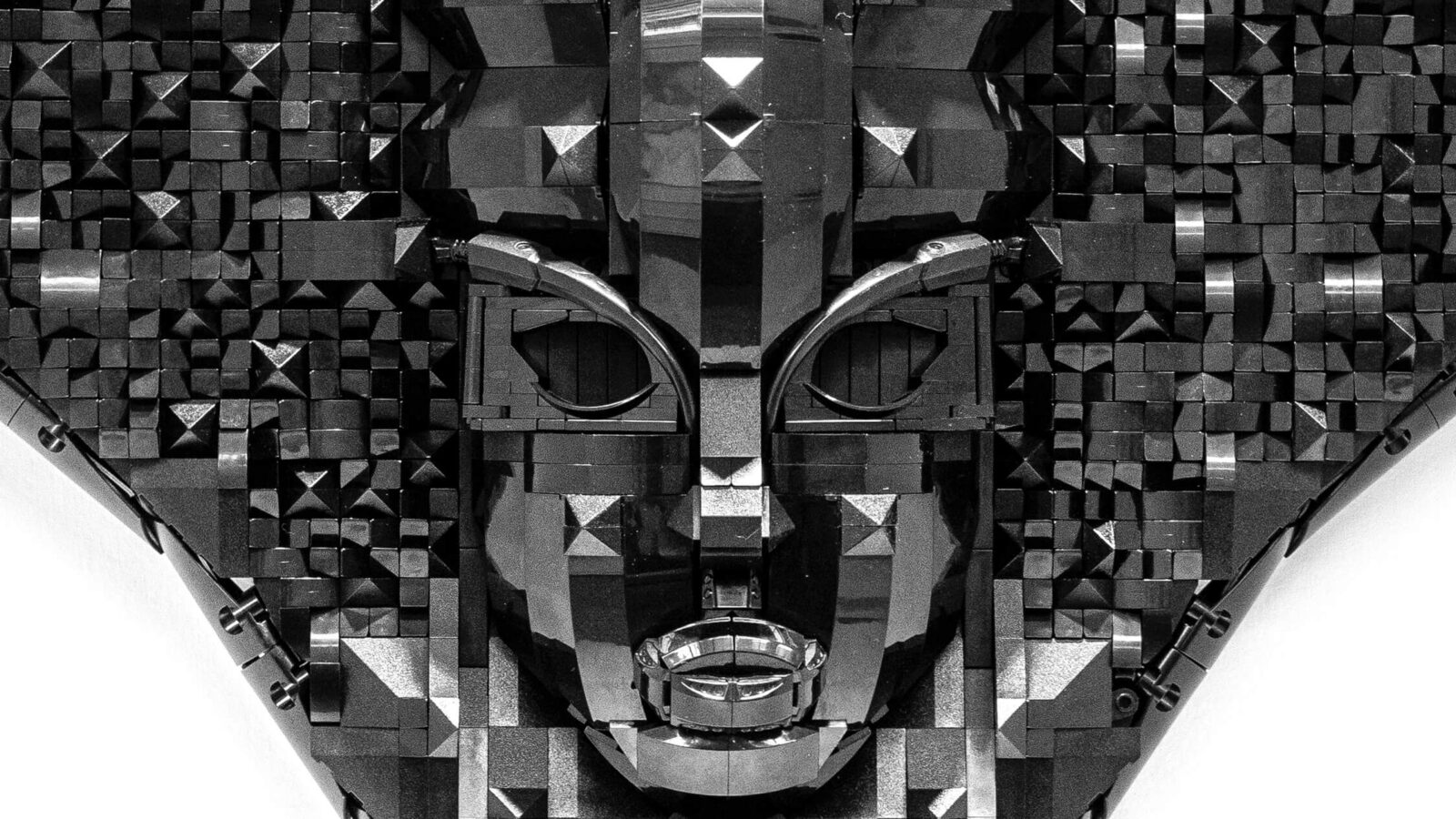 First launched in 1949 as “Automatic Binding Bricks” by Denmark-based Ole Kirk Christiansen and his company The Lego Group, these interlocking plastic modules would eventually become one of the most popular toys in the world: LEGO. “It’s not something you associate with Blackness or Black culture in any regard,” explains Toronto-based Ekow Nimako of the Danish juggernaut. But that’s precisely the point.

Coinciding with Black History Month celebrations across the city, Nimako’s latest exhibition, Building Black: AMORPHIA is on now at Toronto’s Harbourfront Centre. The Ghanian-Canadian visual artist and sculptor has crafted a series of eight masks made solely of jet-black LEGO components (over 50,000 to be exact).

“Growing up — whether I was playing with LEGO or watching cartoons or movies or [reading] comic books — representation was always an issue,” Nimako says. “You’re surrounded in whiteness with everything that you consume.” Using toys that permeate popular culture, the artist not only explores how constructions of race are entangled within such quotidian objects, but addresses, quite literally, how they might be used to build a different future.

Curated by Ashley McKenzie-Barnes (also responsible for the surrounding programming of the 25th Kuumba, Toronto’s longest running celebration of Black History Month), the show spotlights the artist’s process of re-contextualizing the seemingly ubiquitous toys in a host of new works, which draw formal references from flora and fauna into hybrid creatures with armour-like features – all comprised of the mass-produced LEGO parts.

In the graphic Khartoum, the qualities of an elephant (trunk and all) are visible. Nearby, Simis approximates the profile of a gorilla with feather-like appendages adorn its brow and cheeks. The pronounced ears of Fennyx frame a cascade of plastic components that suggest leaves and scales. And, emerging from the spine of what appears to be mechanical manta ray, Mantawutu‘s cyborg portrait — with geometric lips, dramatic brows and faceted skin that creates an angular facial structure — takes a noticeably more anthropomorphic approach.

Together, the futuristic visages create an “amorphous and fantastical tapestry” that Nimako describes as “haunting” and “simultaneously traditional.”

Mask have a long tradition in West African culture, one that is also deeply interwoven with the history of Art. “The mask is a symbol of coming of age, death, birth and rebirth” and has a “cultural, spiritual, and political role,” explains the exhibition’s didactics. And their form is far from simply aesthetic. As Nimako reveals in his self-described “afrosurrealist” works – inspired by African masquerades and carnival traditions – they are links to both the spiritual and ancestral.

The series is only a small part of Nimako’s ongoing body of work, Building Black, which explores Black identity through the medium of LEGO bricks — from the 100,000 blocks used to imagine a Ghanian metropolis in the year 3020 (recently exhibited at the Aga Khan Museum) to Cavalier Noir, a life-sized unicorn and rider composed of over 80,000 pieces.

Nimako keeps abreast of the latest additions to LEGO’s lines, and the ever-expanding medium informs the final work as new parts open up additional possibilities and inspiration. Yet, as much as his medium ebbs and flows, the artist remains committed to the singular current underlying his work: deftly blending history, industry, race and technology to provide a powerful Afrofuturist vision that is distinctly Black.

Building Black: AMORPHIA continues until June 7, 2020 and is part of the 25th anniversary of Kuumba, Toronto’s longest running celebration of Black History Month.