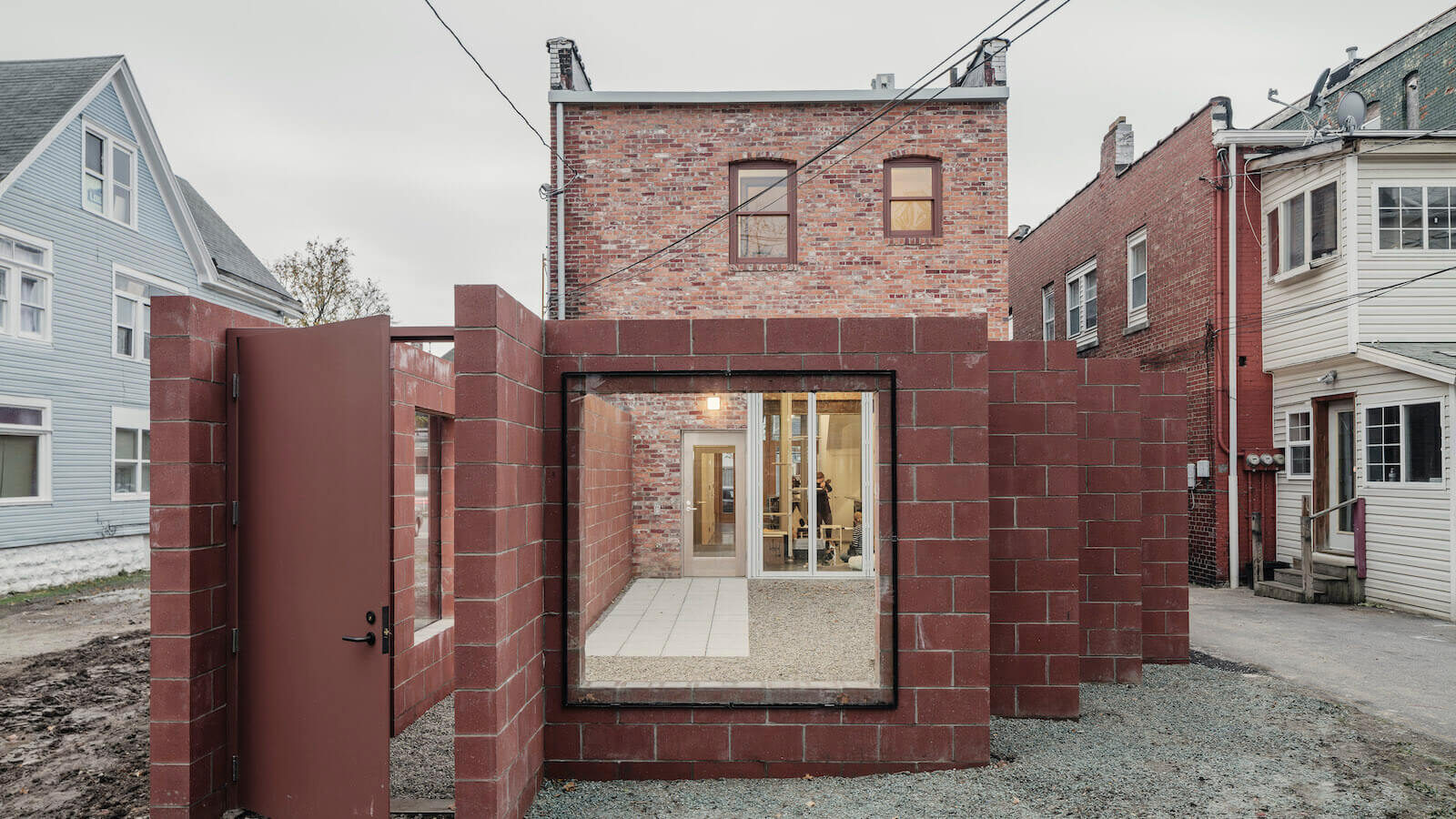 Davidson Rafailidis adapts a heritage building into a resilient springboard for “continual construction.”

In the 120-odd years since its construction, the two-storey brick building in Buffalo’s Lower West Side has been a grocery store, attorney’s office, strip club, hair salon (to name just a few businesses) and lately a vacant, boarded up shell. But thanks to a playful intervention by local design studio Davidson Rafailidis, the historic structure has been re-invented yet again as an elegant cat café – and a springboard for nourishing a continually evolving urban milieu.

The building now home to Buckminster’s Cat Café was refurbished with a clear, air-tight separation of spaces in order to ensure a sanitary buffer between cats and coffee drinkers. For the architects, however, the unique logistical constraints were not a problem to overcome so much as an organizing principle to embrace. Their introduction of partitioned spaces was the fulcrum for a design that welcomes changing uses as well as incremental densification.

But first, the felines. While visitors enter the café through the front entrance, cats occupy a quieter rear space. Featuring a series of ledges and a climbing post, this active feline social hub is accessed via a secondary entrance that emerges onto an enclosed outdoor area affectionately dubbed the “catio” (more on that in a bit). The front and back zones are rendered discrete by a series of transparent glass partitions. These zig-zag glass walls foster a dynamic interaction between the two spaces and species, giving cats a choice of comfortable nooks and corners with views to the wider world. And when rest and privacy are the priority, the cats can disappear from (human) view behind an elegant blond wood partition.

Meanwhile, for café guests and potential adopters – a main raison d’être of the cat café – the tranquil back catio encourages al fresco inter-species interaction. Framed in brick, the outdoor space is also enclosed by the café’s accordion-like aluminum and glass facade – its form hinting at the zig-zag pattern of the interior partitions — which can open to create a seamless transition outside in warmer weather.

While the program is defined by a clear division of uses, the interplay between the disparate zones feels both friendly and aesthetically seamless. Inside, black terrazzo tiles line the floor on both sides of the glass partition, with matching terrazzo benches and counters similarly reaching across the divide. Simple, durable finishes round out the interior; stainless steel and anodized aluminum hardware is paired with light oak plywood and poplar accents and white and light grey paint. From front to back, clear, open sight-lines foster a unified, light-filled whole. It makes for an elegant, unfussy space that stands up to wear from hands, shoes and claws in equal measure.

It’s also surprisingly flexible. A cat café imposes rigid typological constraints, but Davidson Rafailidis saw this an invitation instead of a limitation. “We are interested in connecting activities that are otherwise problematic to come together,” says Stephanie Davidson, co-principal of Davidson Rafailidis. While the architecture is tailored to the café, the design scheme can just as easily accomodate any number of dual scenarios, from laptop and non-laptop zones, loud and quiet areas, or even a timely separation of COVID antibody carriers and non-antibody carriers.

With an eye to the future, Davidson Rafailidis designed an interior as versatile and hardy as the building’s century-old bones. “The idea was to use resilient materials like terrazzo, so that the inside could withstand time as well as the outside brick shell has,” says Davidson. The aesthetically understated interior also allows each new occupant to define the space on their own terms. “The subdued palette is meant to highlight whatever specific, programmatic elements end up being planted in the space,” says Davidson.

The design recognizes the inherent evolution of urban retail: For now, it’s a cat café. But, as the building’s history shows, the space exists in an itinerant state, which is a fundamental reality of city life everywhere. Davidson Rafailidis, however, has presented a stark contrast to the way design-driven retail and hospitality spaces are typically conceived in nearby global cities like New York and Toronto, which requires much (wasteful) building, gutting and rebuilding. Their intervention maintains the building as a resilient, sustainable canvas for evolution – and creates a beautiful space in its own right.

And there’s still more to come. Responding to a recent change in the Buffalo zoning code that encourages modest infill density through greater lot coverage, the architects designed the space to accommodate future expansion. The catio, for instance, is enclosed by sturdy masonry engineered to allow for the addition of a second storey. (In the back of the site, the bricks for a future expansion have already been delivered). 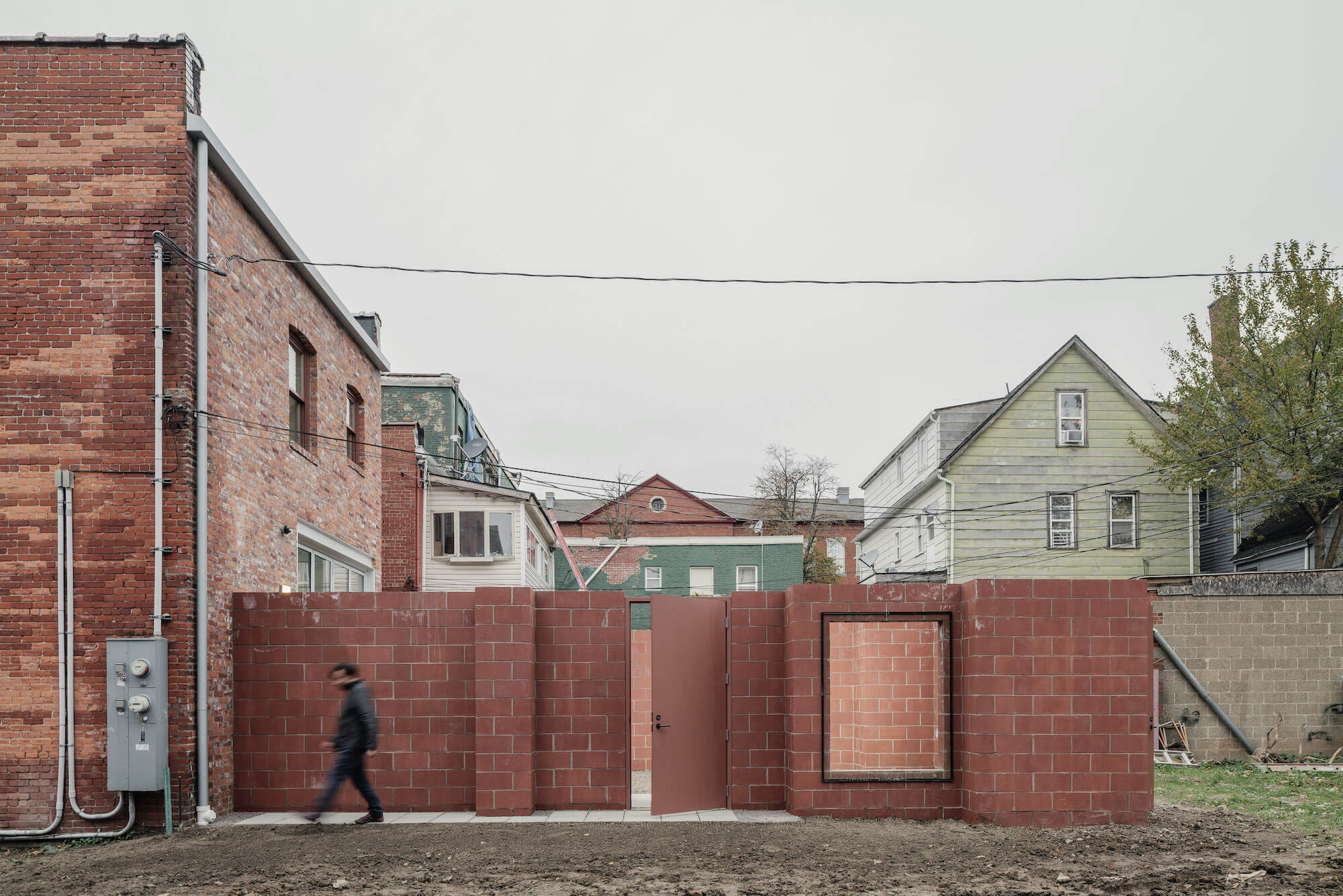 In fact, the newly adapted building is just the first step in an iterative plan to redevelop the whole of the narrow lot, which measures some 8.2 by 40 metres. In collaboration with the site’s owner, the firm is planning a typologically diverse series of mixed-use structures interspersed with green space, ranging from a carport topped by a small living area to a chicken coop, daycare or massage clinic, with the individual stages proceeding as funds are available and new community needs arise. What’s more, the spatial separation that already divides the building means that small-scale construction and renovation can take place in one part of the complex without disturbing activity elsewhere. 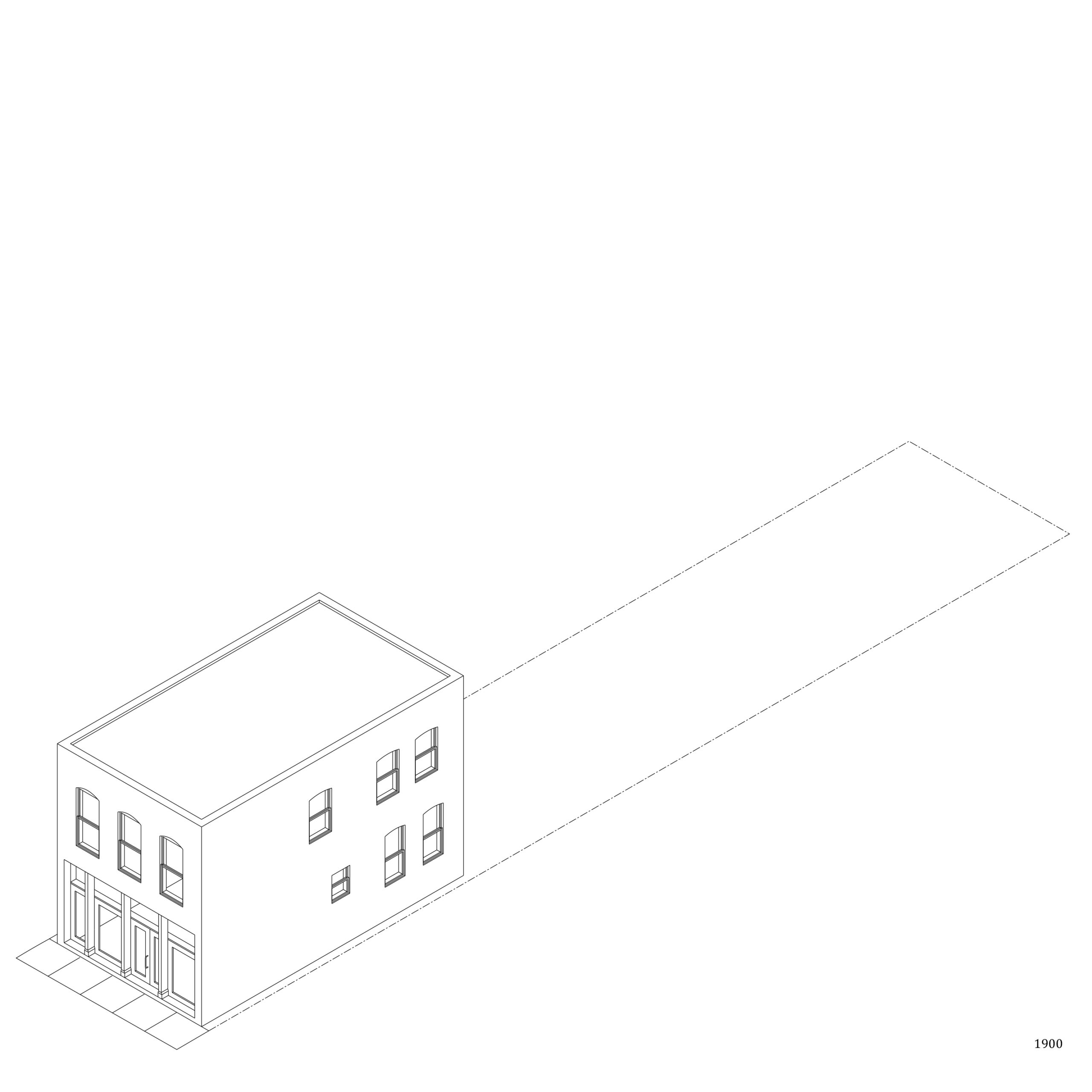 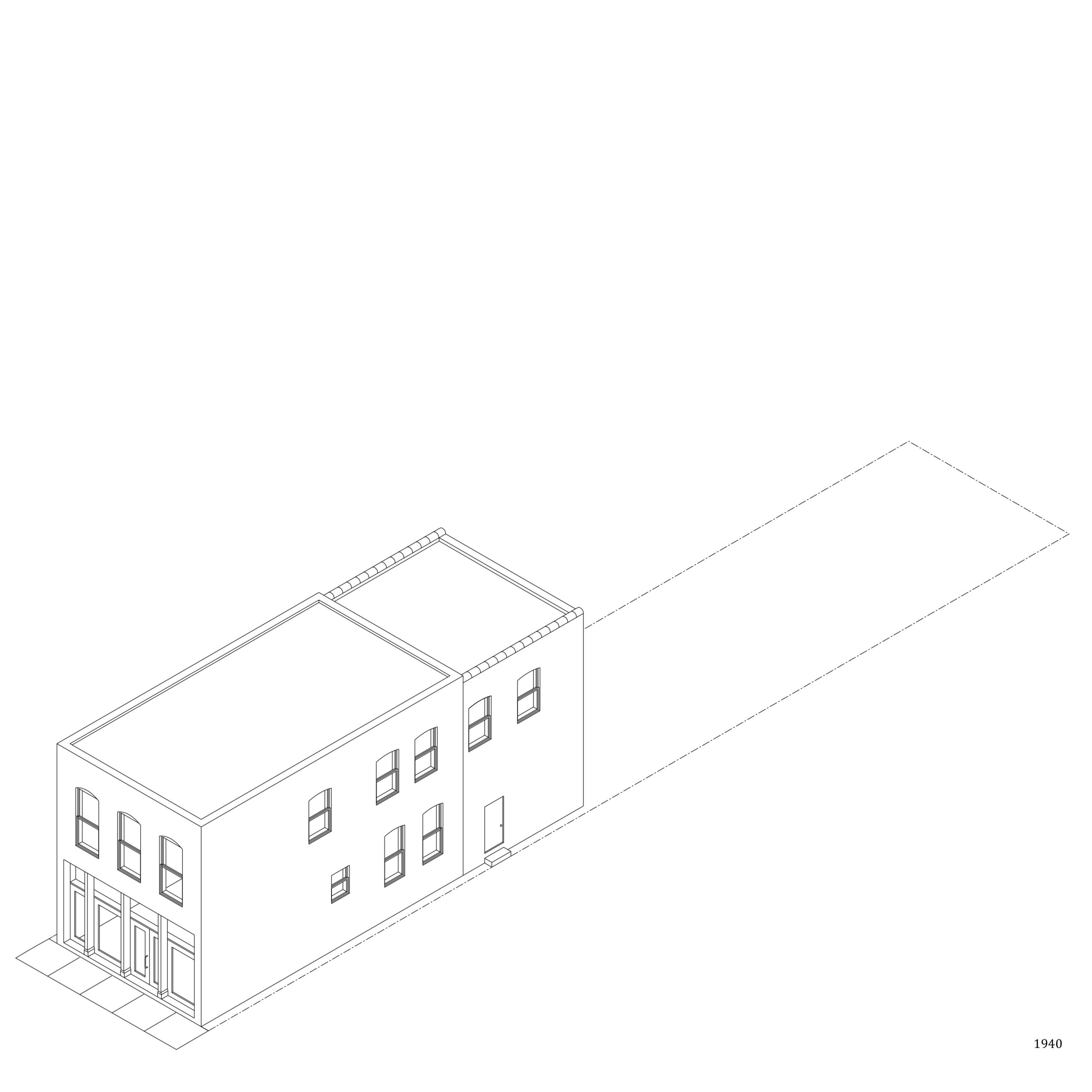 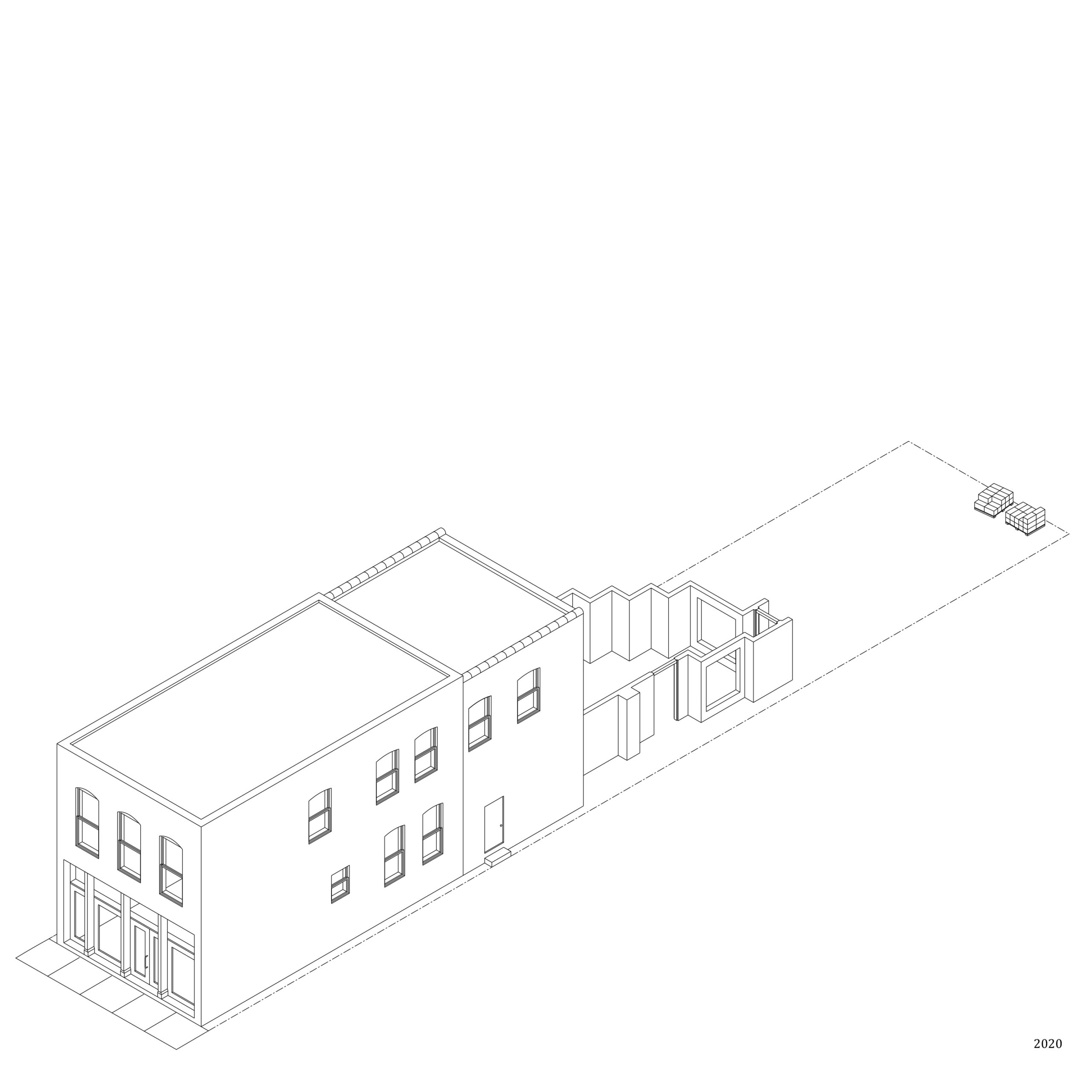 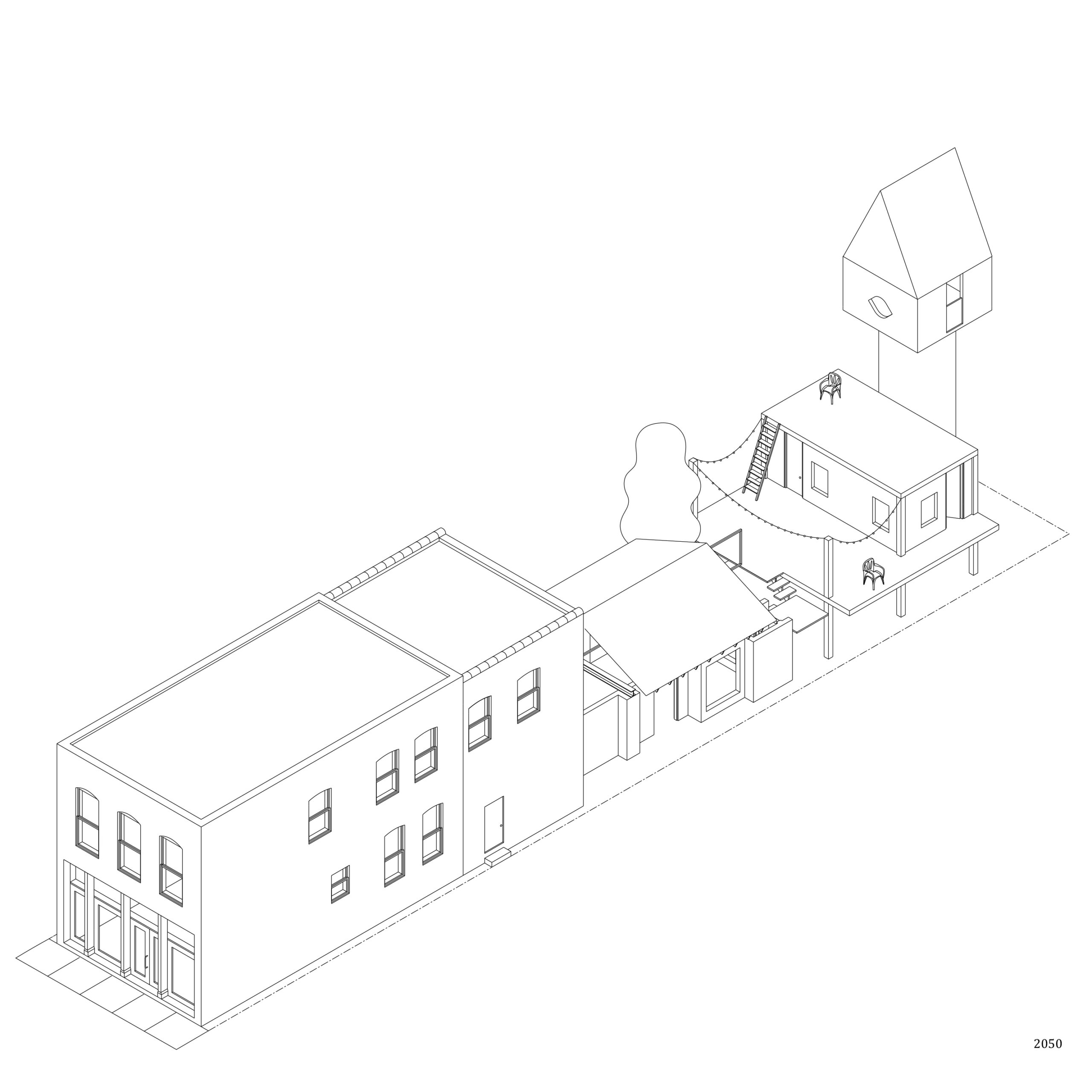 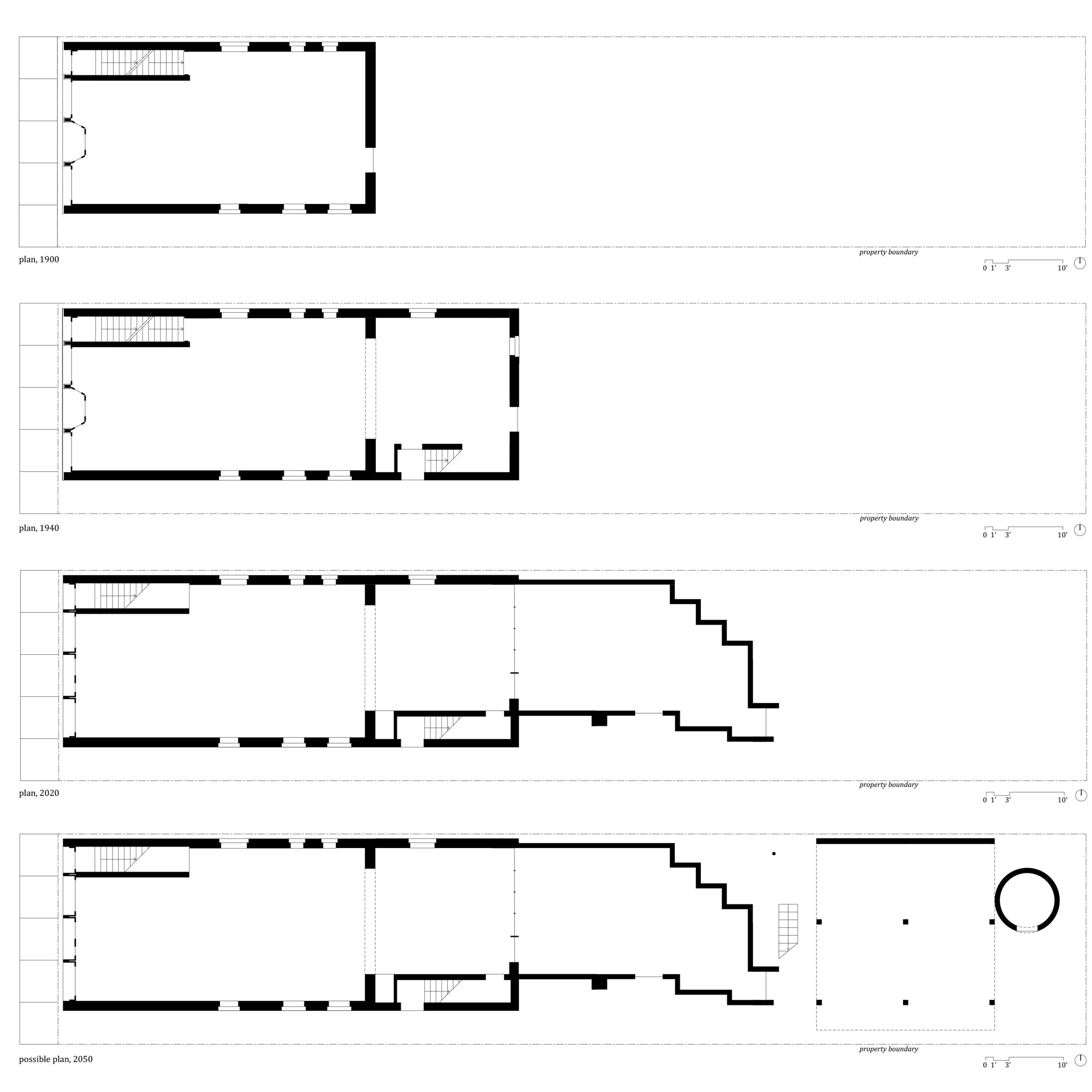 “The so-far realized form is a part of a future whole,” says Davidson. “We asked: Could a project — a building — be thought of as a continual construction instead of a single expense incurred all at once?”

It is a question answered with aplomb. It all remains unfinished, and it probably always will, but Davidson Rafailidis have already done plenty. Here, architecture is best understood as process. On that level, it is a riveting accomplishment – and more importantly, an accomplishment in the making.

Davidson Rafailidis adapts a heritage building into a resilient springboard for “continual construction.”