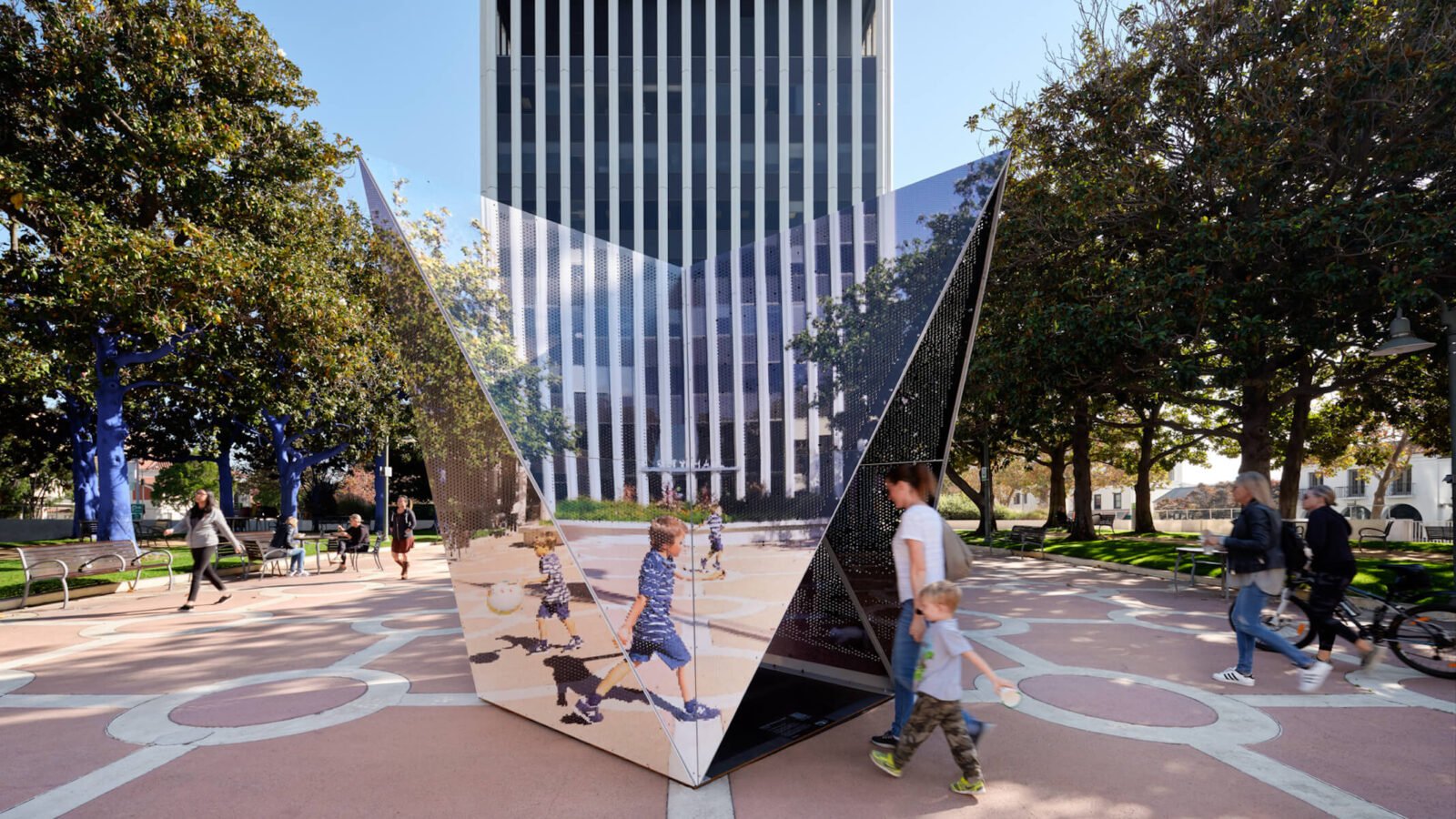 The public art piece is by the trompe-l’oeil masters at FreelandBuck.

From a distance, it appears almost transparent. But look closer: the deceptively vivid sculpture is emblazoned with printed images. In Palo Alto, California’s King Square, Cache Me if You Can is not a distorted view of the present but a chronicle of the recent past – presenting a series of snapshots of urban life taken on May 31, 2019.

On that late spring day, New York and Los Angeles-based designers FreelandBuck took photos of King Square, and people passing through it, at different points throughout the day. The images were used to create a projected pattern that was then printed onto the 10 identical perforated triangular PVC panels that comprise the installation. 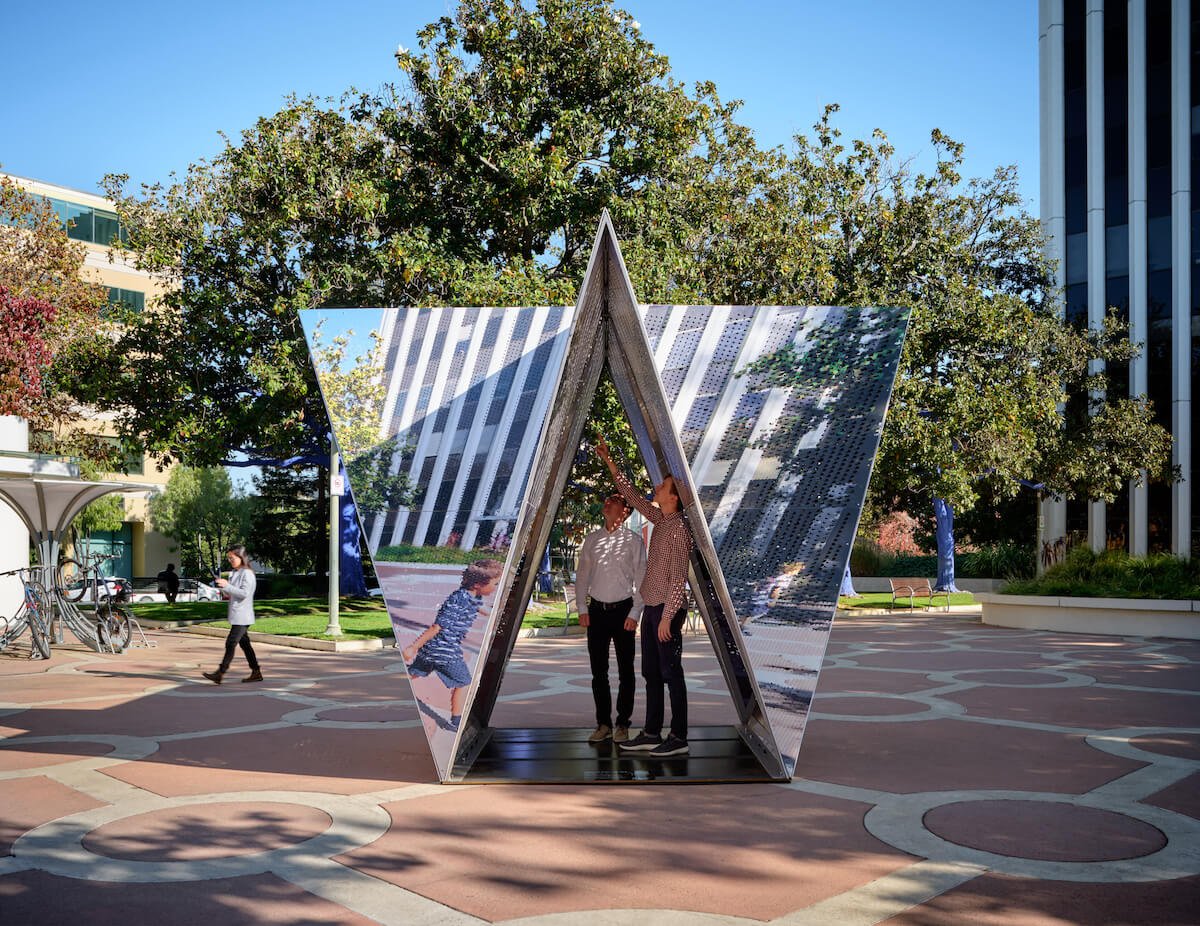 Each of the plastic sheets is printed on both sides, with the panels arranged to create a passageway through the angular sculpture. Seen head on from the front, the images on each panel align with their surroundings, making the sculpture read almost as an extension of the park – and the Palo Alto city hall behind it. It’s a surreal aesthetic, but one that spills over into psychedelia when the installation is viewed from other angles. The images begin to appear stretched and folded, at once undermining and amplifying the sculpture’s presence. 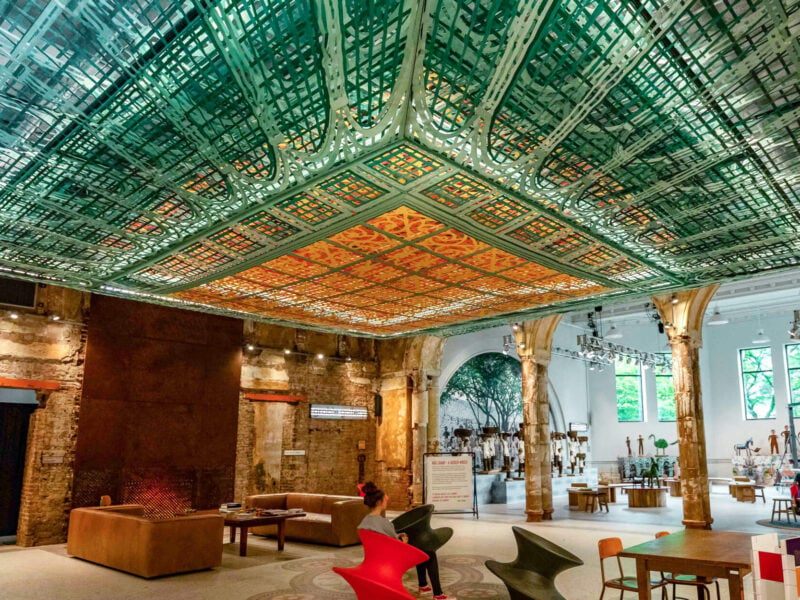 The Wonderful Trompe-l’œil Ceiling at the Children’s Museum of Pittsburgh
Both provocative and contemporary, Freelandbuck’s take on trompe-l’œil mesmerizes.
Read More 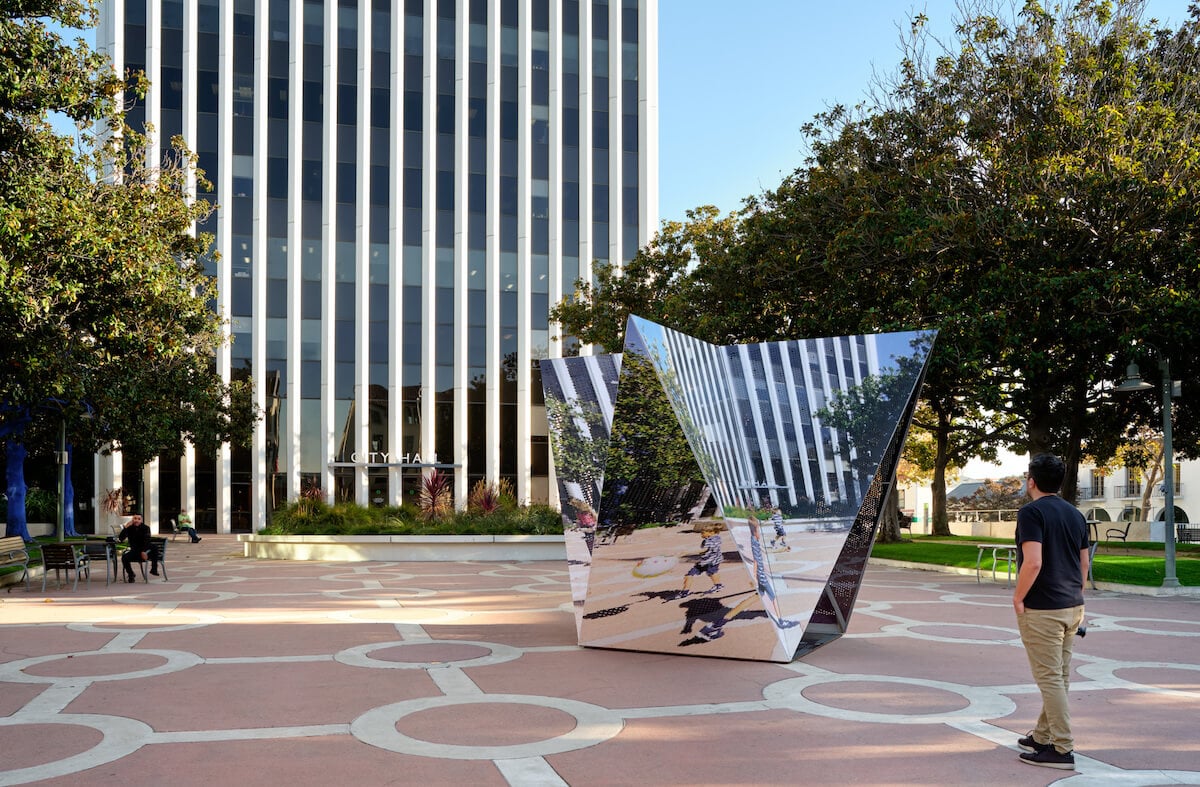 “From a distance, the photograph is clear, but up close, the surface of the pavilion disintegrates into an abstract pattern of vibrating discs,” says FreelandBuck principal Brennan Buck. 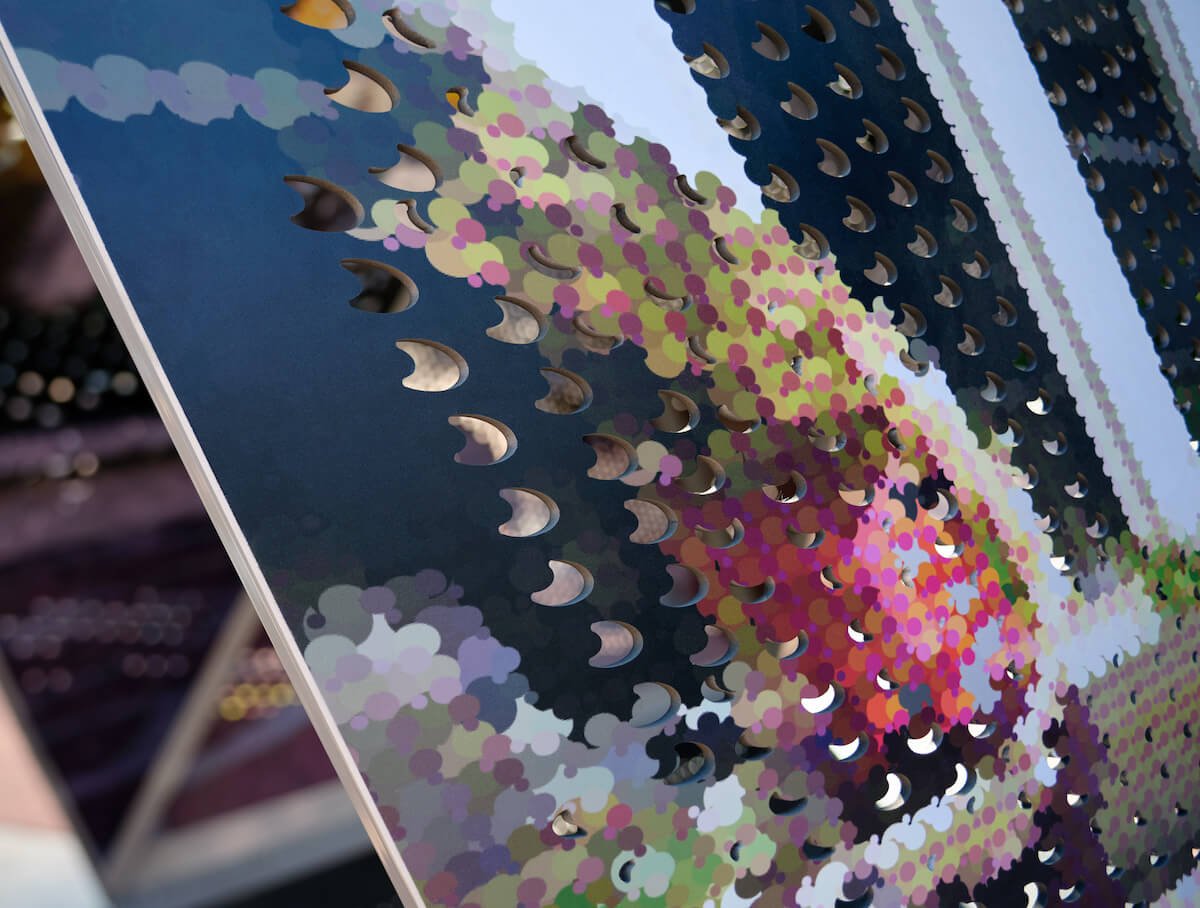 It gets weirder. Inside the installation, the extreme close-up view of printed sheets contorts the seemingly photorealistic images into an abstracted play of light and colour. From here, the outside world is framed in a kaleidoscope of shapes and shadows. 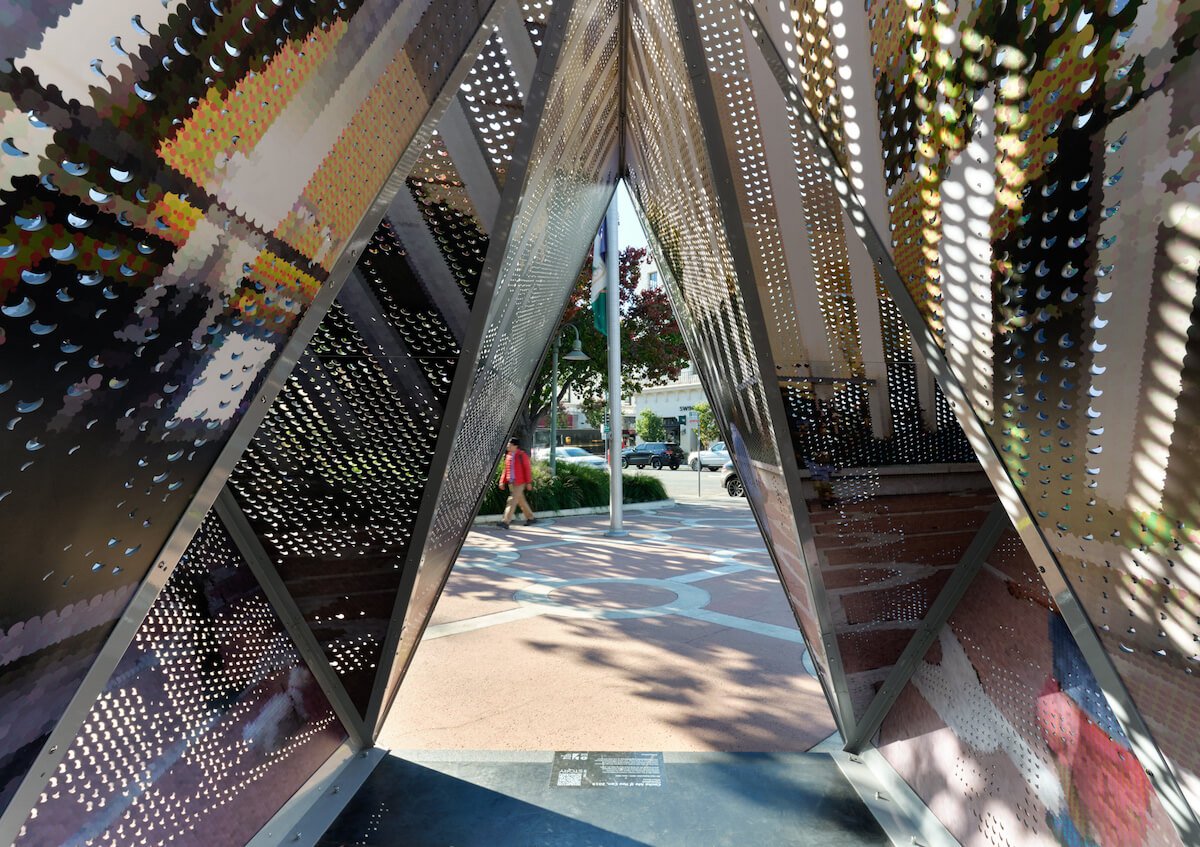 Even from afar, however, subtle variations in light and shadows create a rich canvas – and a counterpoint – to the faster pace of human activity captured in the images. It’s an effect that examines the simplest realities of daily life. Cache Me if You Can draws out complex layers of narrative from something as simple as the changing of the light. 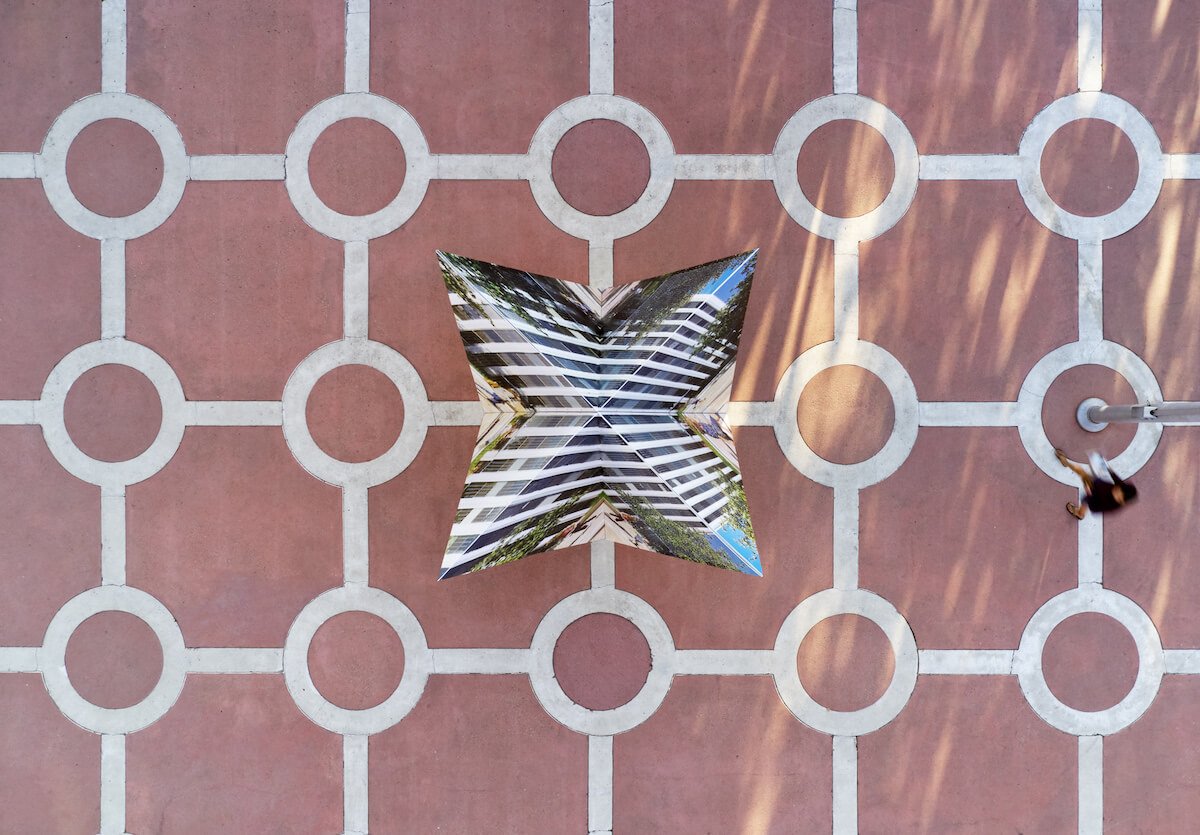 The public art piece is by the trompe-l’oeil masters at FreelandBuck.