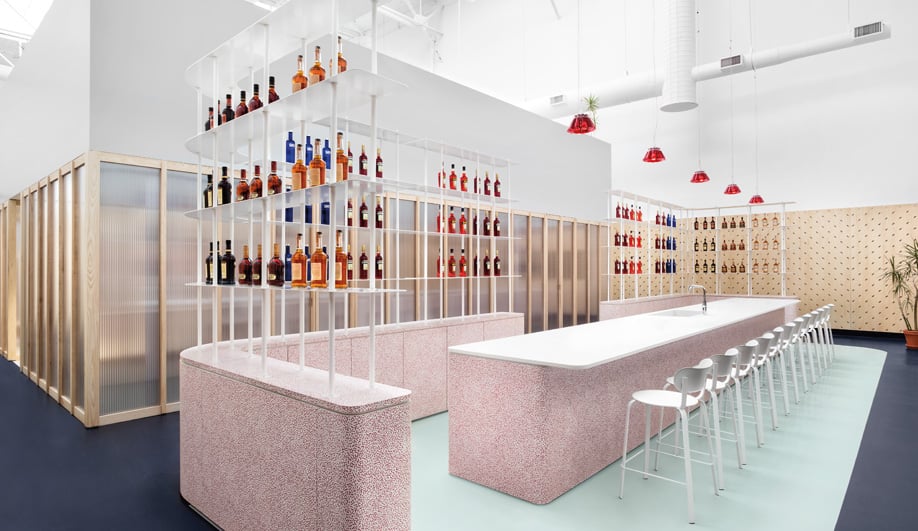 The laminated bar is clad in Bacterio, a pattern designed by Ettore Sottsass in the 1980s.

Toronto firm I-V sets the bar high with a dramatic office for the Italian brand known for its ruby aperitif.

Campari’s first office was in a basement in central Milan – or at least that was where Gaspare Campari distilled the bracing concoction his wife served in the bar upstairs. But that was over a century and a half ago. For the opening of its Canadian office (its 24th internationally), Gruppo Campari wanted something ambitious, audacious, even a little celebratory.

Tucked away on a dead-end street in Toronto’s Liberty Village, a trendy locus for start-ups, tech companies and advertising firms, the office had been a film studio and before that a foundry. At first, it didn’t look like much: it had no windows, no partitions, no ventilation. The space was “a horrible black hole,” as Massimo Mottura, president of Campari Canada, describes it. But that 890-square-metre void allowed innovative local design firm I‑V to literally rip it up and start again. 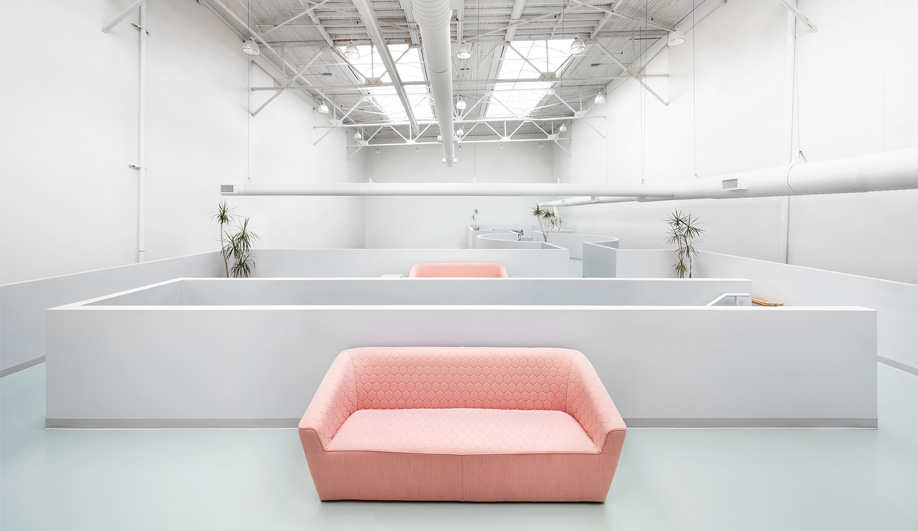 Although the office has no windows, it’s flooded with natural light from above.

The result – open concept seating, informal and formal meeting areas, a flexible event space, a Ping-Pong table – ticks off all the requirements of the modern office. It’s collaborative, pragmatic, creative. And with its chill-out zones, cool palette and a five-metre bar, it also feels like a fabulous nightclub of the future.

As in any exclusive club, the entranceway is nondescript, and the low-ceilinged reception area could easily double as a coat check. Then you step into a gleaming white space with 12-metre ceilings. “It’s almost like walking into a cave and discovering something really magical,” says Emil Teleki, founder and designer at I‑V. Shelves of wildly coloured liquor bottles glow in the light that streams down from rows of skylights. Ventilation ducts snake through the space like supersize pneumatic tubes. Translucent polycarbonate sheeting screens off the rest of the space, forming an ad hoc VIP zone. Behind the bar, it’s all business. 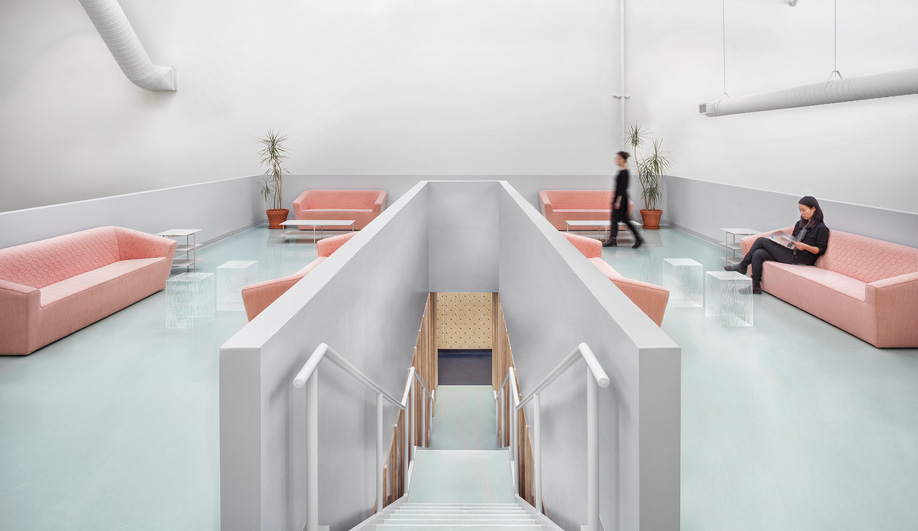 The inspiration came from an old Campari ad, created by Italian futurist Fortunato Depero, wherein the figure of a man and his chosen drink are distilled down to pure geometries. “We basically looked at that as the reference point,” says Teleki. “When we started to look at the space planning, we saw that we had this rectangular box, and we actually drew circles, squares and rectangles in the box. It was really as simple as that.” 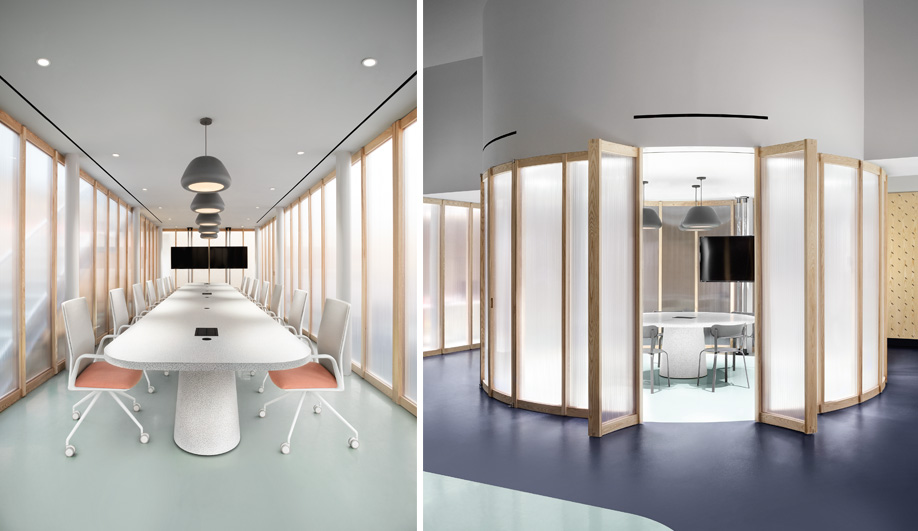 That translucent screening forms the walls of the main boardroom, a round meeting room, and the executive offices, which frame a large bank of open workspaces. To make the most of the sky-high ceilings, Teleki and designer Ebrahim Olia added steel support beams to repeat the same shapes up on the mezzanine, resulting in fantastic sightlines – a spindly tree at the end of a hall, the curve of a wall or the sculptural quality of a heating duct.

“We like to identify themes and abstract them until they are nothing more than patterns and textures,” explains Teleki. Using the cascarilla plant, one of the few confirmed ingredients in Campari (the full recipe is a closely guarded secret), I‑V created a leaf pattern on the white ash plywood panelling. In a nod to the cochineal beetle, which gave Campari its trademark hue, all of the custom desks and tables are topped with a squiggly Memphis pattern. Fittingly, Ingo Maurer’s Campari pendants, which are each made of 10 Campari Soda bottles, light up the bar. 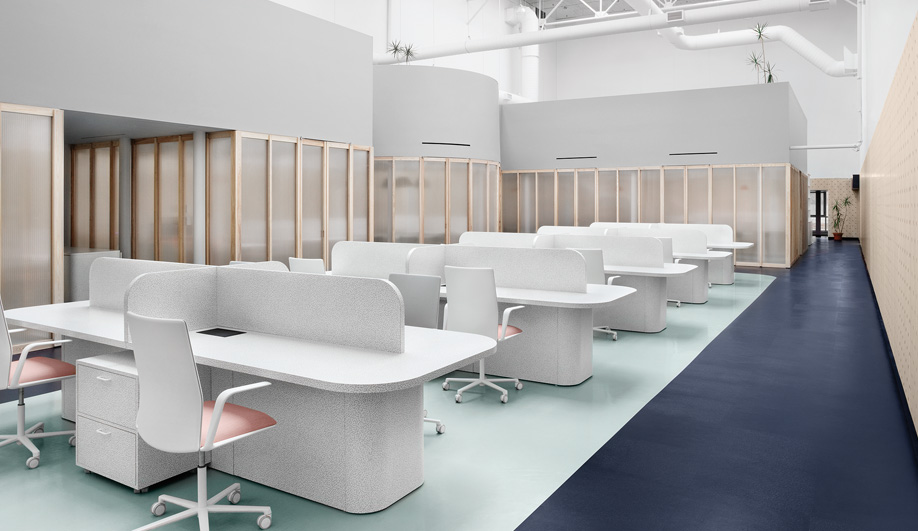 The 12-metre-high ceilings allowed for a mezzanine, which overlooks the open-concept workspaces.

These flourishes soften the stark minimalism so the overall effect is sprightly, rather than stark. Tellingly, the front bar, which will be used for events, training sessions and tastings, has already become a favourite gathering spot at lunch. It’s a space that draws people together – the mark of any good bar, or office.