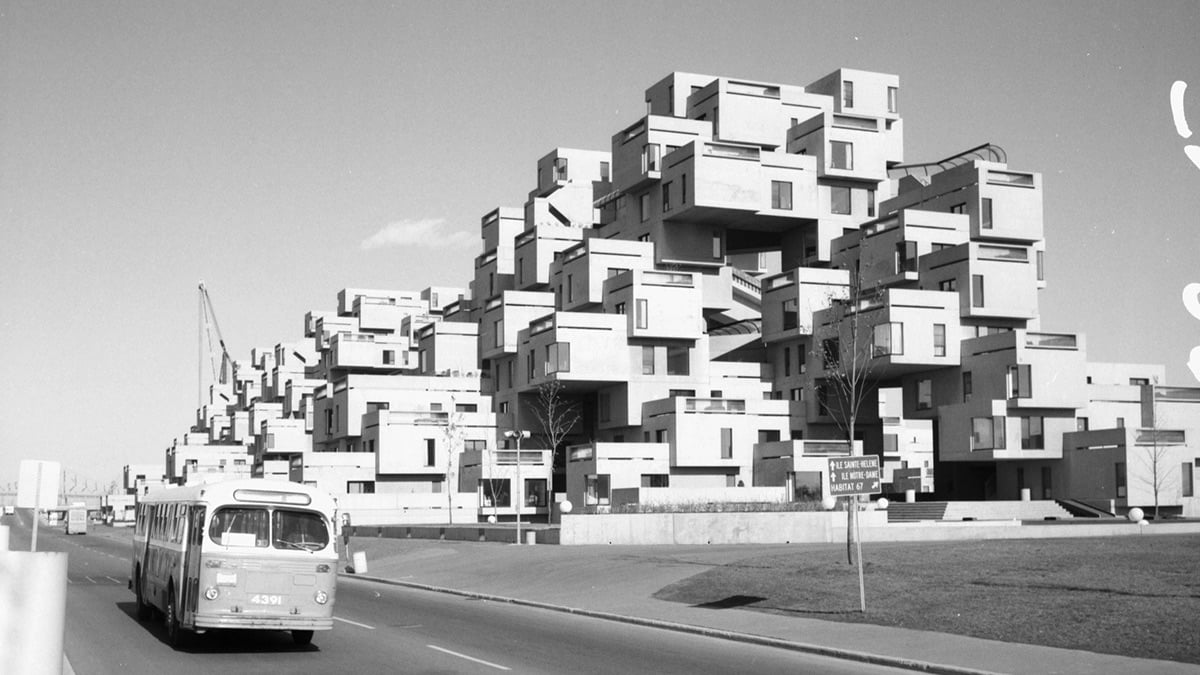 1967 to Now: New Anthology Tackles Half a Century of Canadian Architecture

The answer, then, might be more temporal than geographic. Canada’s modernist movement came to global attention in 1967, which is where Canadian Modern Architecture, 1967 to the Present begins, cataloguing over half a century of design starting from the country’s centennial year. Edited by Elsa Lam (a former colleague of mine at Canadian Architect) and Graham Livesey, the anthology explores some of the places and movements that have shaped the nation in 15 chapters by 17 authors, and some 500 pages. It takes a stab at understanding what we built – and why we built it. 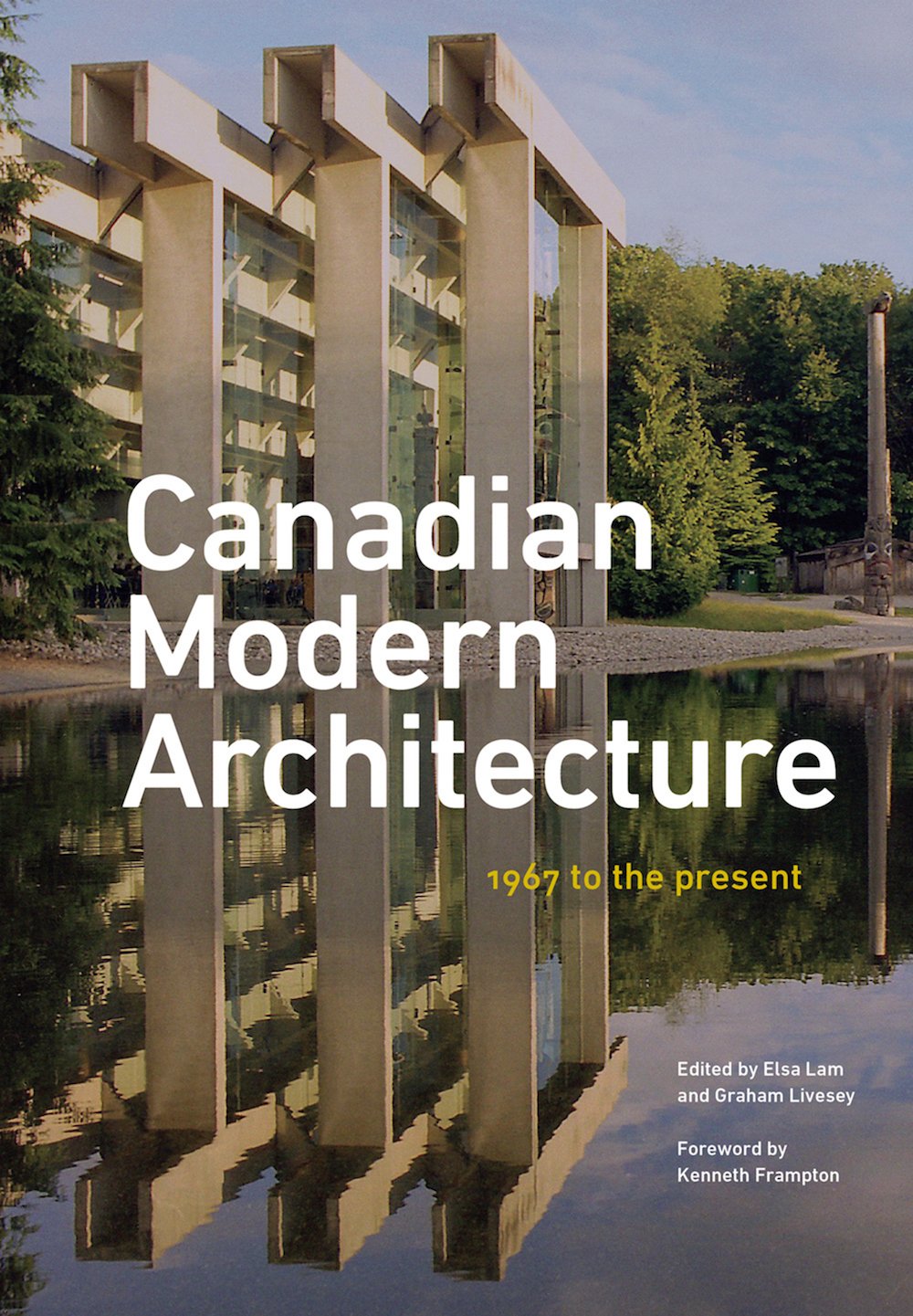 While the ambition of Canada’s centennial – and Expo 67 – offers a symbolic point of genesis, the book acknowledges an earlier beginning. In the opening chapter, Marco Polo and Colin Ripley highlight the government policies that spurred the creation of Canada’s architectural icons. Via a series of progressive programs – from the establishment of the Massey Commission in 1949 to the eventual creation of the Canada Council for the Arts (1957) and the Centennial Commission (1961) – the Canadian government looked to catapult the country onto the world stage.

It worked. Federal investment in architecture competitions resulted in modern, expressive public buildings across the country. The dream coalesced in Montreal, where the 1967 World Expo introduced a new Canada to the world. “Here was a representation of Canada as a modern nation, built from the ground up,” Polo and Ripley write.

The zeitgeist is epitomized by Moshe Safdie’s now-legendary Habitat 67 on the Saint Lawrence River. The architect famously developed the concept as a 24-year-old graduate student, subsequently winning a government commission and completing the building before his 30th birthday. It’s a remarkable story, yet one that seems impossible in today’s Canada. Why?

As Polo and Ripley put it, Centennial-era buildings “can be read as relics of a time when architecture was understood to play an essential role in Canadian culture.” No longer. Following separatist turmoil, the oil shocks of the 1970s, and the subsequent “emergence of a neoliberal political order,” the ambitions of mid-century policies have gradually eroded, giving way to “a view that buildings themselves have little value as cultural objects, but serve only as vessels for other content.” 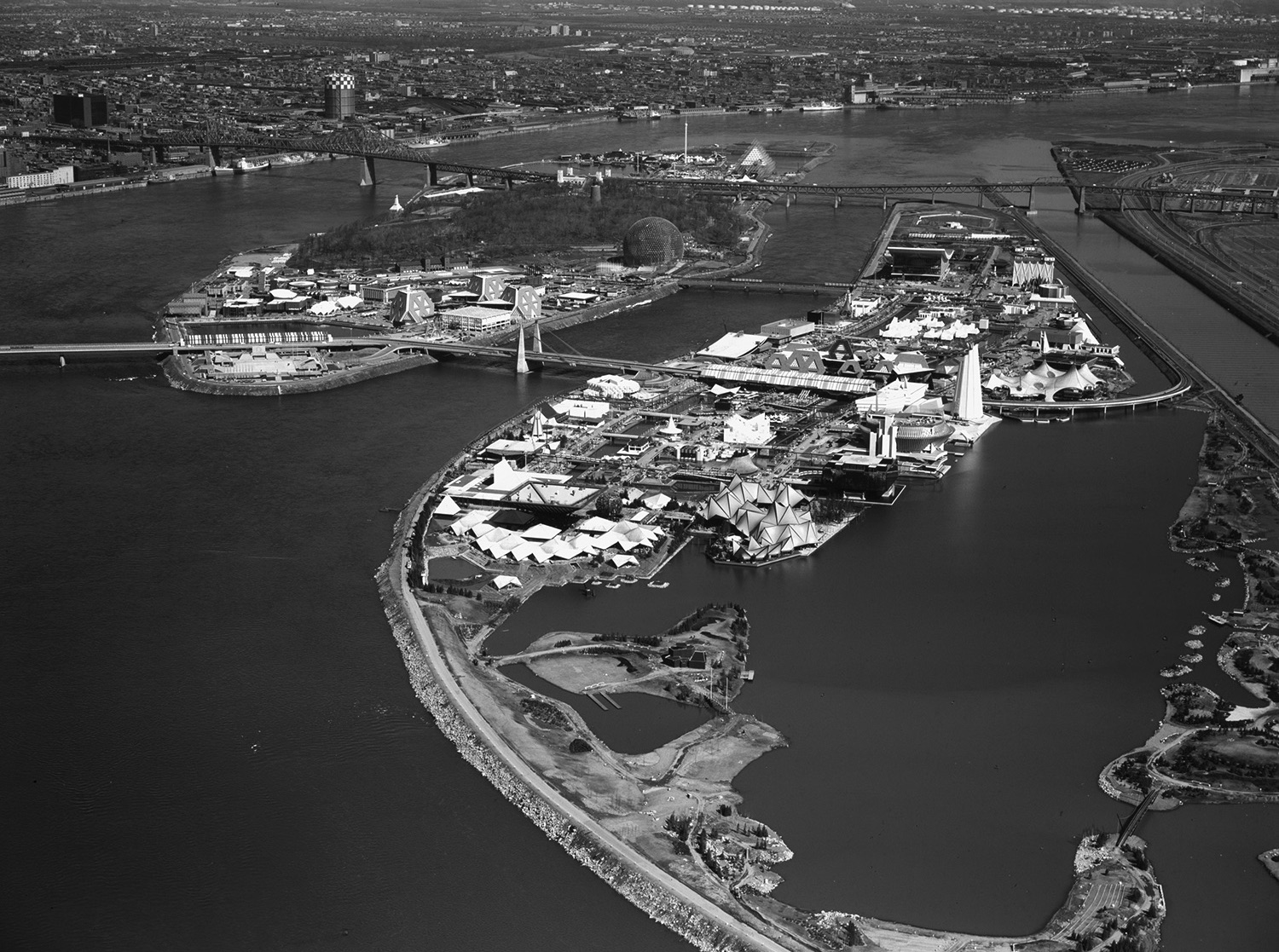 It’s a perspective that carries through all 15 chapters. While the book is diverse in scope and authorship, the role of public policy and investment is consistently foregrounded. Chapters on critical regionalism, urban revitalization and public institutions collectively tell a story of mid-century ambition giving way to the federal government’s gradual retreat from architectural advocacy in the decades since. Today’s cost-driven – yet chronically inefficient – RFP protocols and Public-Private-Partnerships “have led to shifts in the role of the architect from designer to project manager,” writes George Thomas Kapelos. Too often, it means that “mediocrity upstages excellence.”

The meta-narrative of government advocacy is the book’s greatest strength – and the source of its most obvious oversights. While a compelling argument for the return of robust federal and provincial support elegantly ties together a far-reaching anthology, the narrow focus on public architecture policy omits too many of the buildings that have most acutely shaped Canadian life.

In 1967, as Centennial celebrations ushered in a new vision of Canada, a quieter architectural trend profoundly transformed the country. From 1955 to 1979, thousands of high-rise slab towers rose in cities and suburbs from Halifax to Victoria. “The dwelling that’s most Canadian, in its sheer numbers and popularity, is the slab farm,” writes Doug Saunders in the Globe and Mail. If the fact comes as a surprise, it’s because these buildings have largely been excluded from cultural narratives of Canadian life – including this one. Even towers designed by the likes of Uno Prii, Peter Dickinson, and Jerome Markson largely miss the cut.

Fortunately, Ian Chodikoff’s chapter on urban revitalization takes a look at how high-density communities are being designed today. Charting the reinvention of communities like Toronto’s Regent Park and Vancouver’s Granville Island, Chodikoff’s essay outlines the rebirth of social housing communities as mixed-use, mixed-income urban hubs. Here, we get a glimpse of urban life beyond museums, galleries, pavilions and public institutions. It’s a vitally important chapter – especially given the severe dearth of public housing in Canadian cities. However, the scores of typologically similar buildings built without direct government involvement are left out. 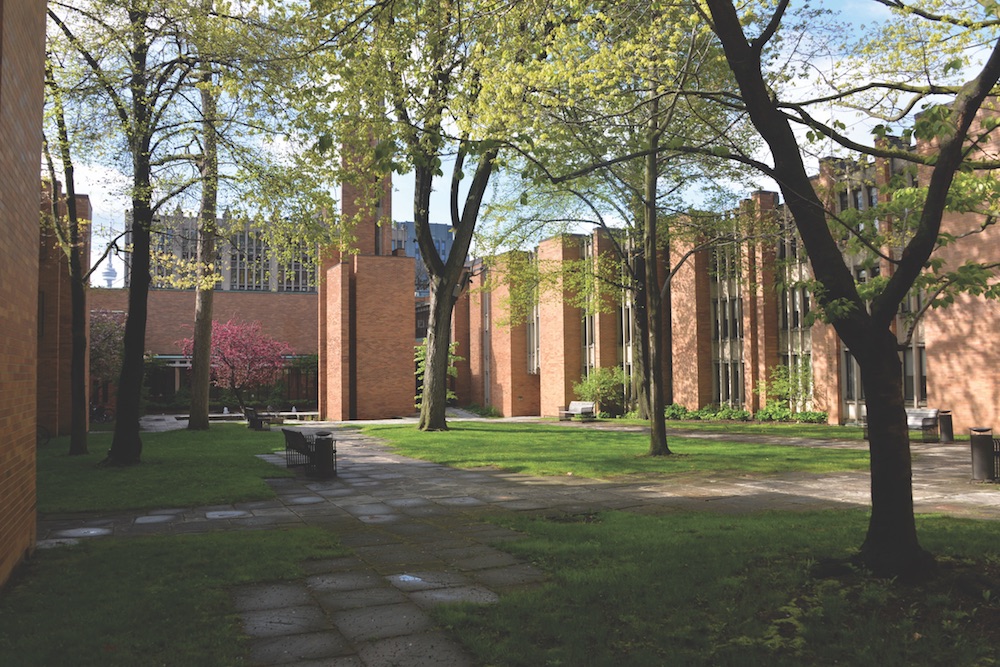 Today, high-rises are once again altering the fabric of Canadian life. In the 21st century, Vancouver, Montreal, Calgary and – especially – Toronto have led North America in high-rise development. In Toronto, kitchen-table debates about the impacts of new condo towers are a ubiquitous part of the city’s culture, transcending architectural circles. Are these buildings any good? Are there too many of them? Are they being built in the right places?

In an otherwise astute chapter on Toronto, Lam pays relatively little attention to the high-rise podium-and-point-tower condo typology that accounts for most of the city’s explosive growth. Given its sameness and general architectural mediocrity, overlooking this reality is an understandable – if worrying – choice.

For example, architectsAlliance is profiled with two elegant and modestly scaled projects: Twenty Niagara Condos and District Lofts. While Lam’s selections are typologically inventive and aesthetically refined, the firm’s high-rise portfolio arguably merits greater attention by virtue of its sheer scale and influence. To my mind, it has probably contributed more to Toronto’s new architectural landscape than any other, radically transforming the city with projects like SP!RE, 18 Yorkville, X, and Murano. They may not be masterpieces, but they represent much of the architectural fabric of 21st century Toronto.

Canadian Modern Architecture‘s approach is a contrast to smaller – and less academic – recent books. In Rise and Sprawl (2016), Partisans and Hans Ibeling charted the scope of Toronto’s condo boom, delving into the dispiriting mediocrity of new towers in fascinating detail. Meanwhile, Alex Bozikovic and Patricia McHugh’s recently updated Toronto Architecture: A City Guide, takes a refreshingly inclusive approach, calling out a massive 78-storey condo tower as “titanically bad.” But whether we like them or not, these new buildings are coming to define how millions of Canadians live. Even if most residential high-rises are – to borrow Polo and Ripley’s phrase – mere “vessels for content,” their continued exclusion from the canon bodes poorly for architecture’s cultural relevance. (And if we want today’s towers to evolve into something better, taking them seriously is a good start). 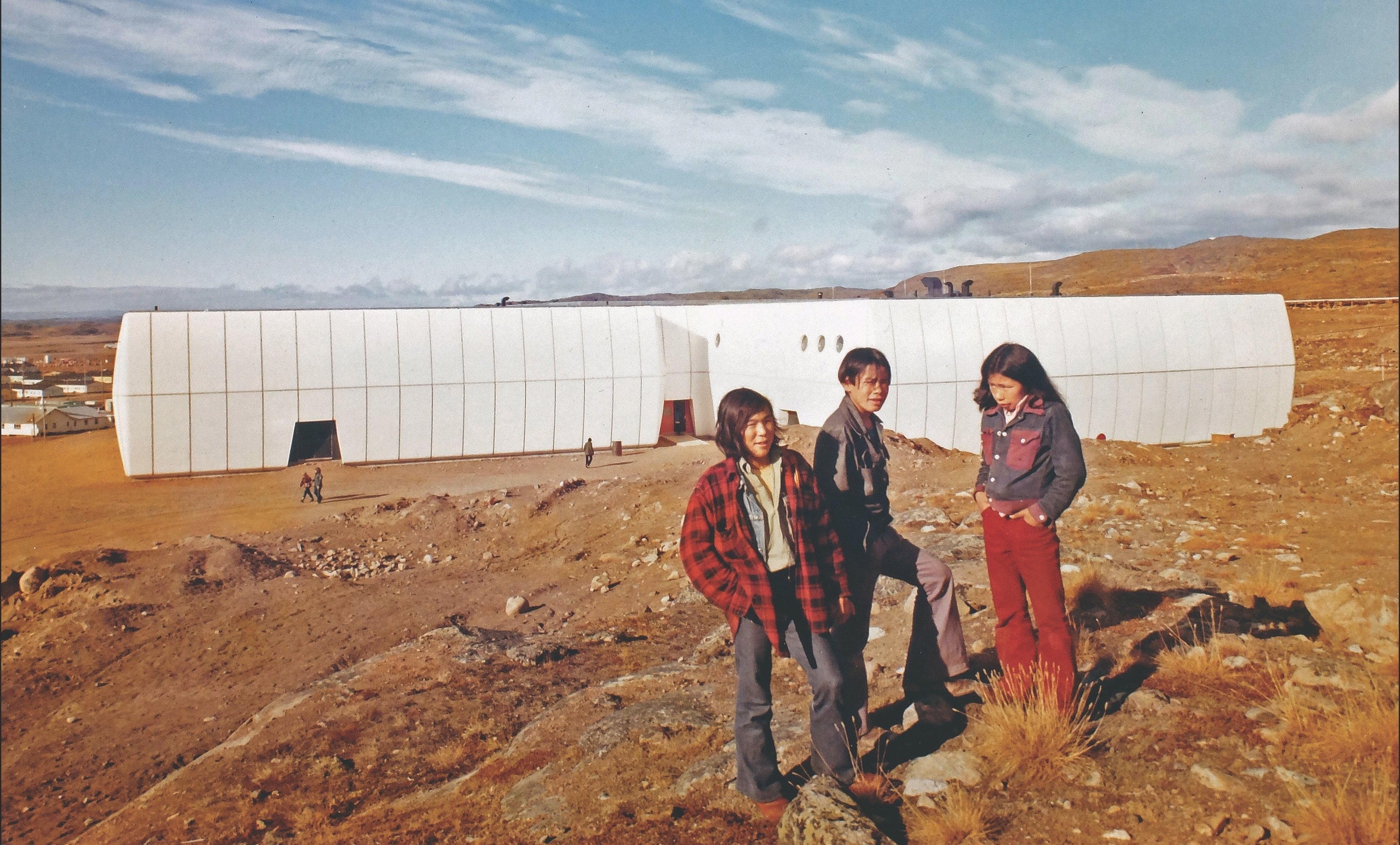 But no anthology can ever be complete; it’s impossible to transcend the messy politics of building a canon. Inevitably, something gets left out. Assessing the book, Phyllis Lambert writes that “the arguments presented by this volume are substantial enough to argue with, and to add to.” It may not sound like it, but it’s high – and highly deserved – praise. To that end, the critiques of Canadian Modern Architecture are a credit to its importance. This is a vital and well-researched work, representing the “first comprehensive review of Canadian architecture in many years.”

In fact, it’s been 25 years. In the book’s introduction, Lam and Livesey reflect on the last Canadian anthology of comparable scope. “In his magisterial A History of Canadian Architecture, Harold Kalman devotes only one of fifteen chapters to modern architecture,” they write. Canadian Modern Architecture, 1967 to the present is a necessary and long-awaited corrective to Kalman’s 1994 opus. But how long will we wait for another magisterial volume to expand the canon again – and to make its own mistakes?