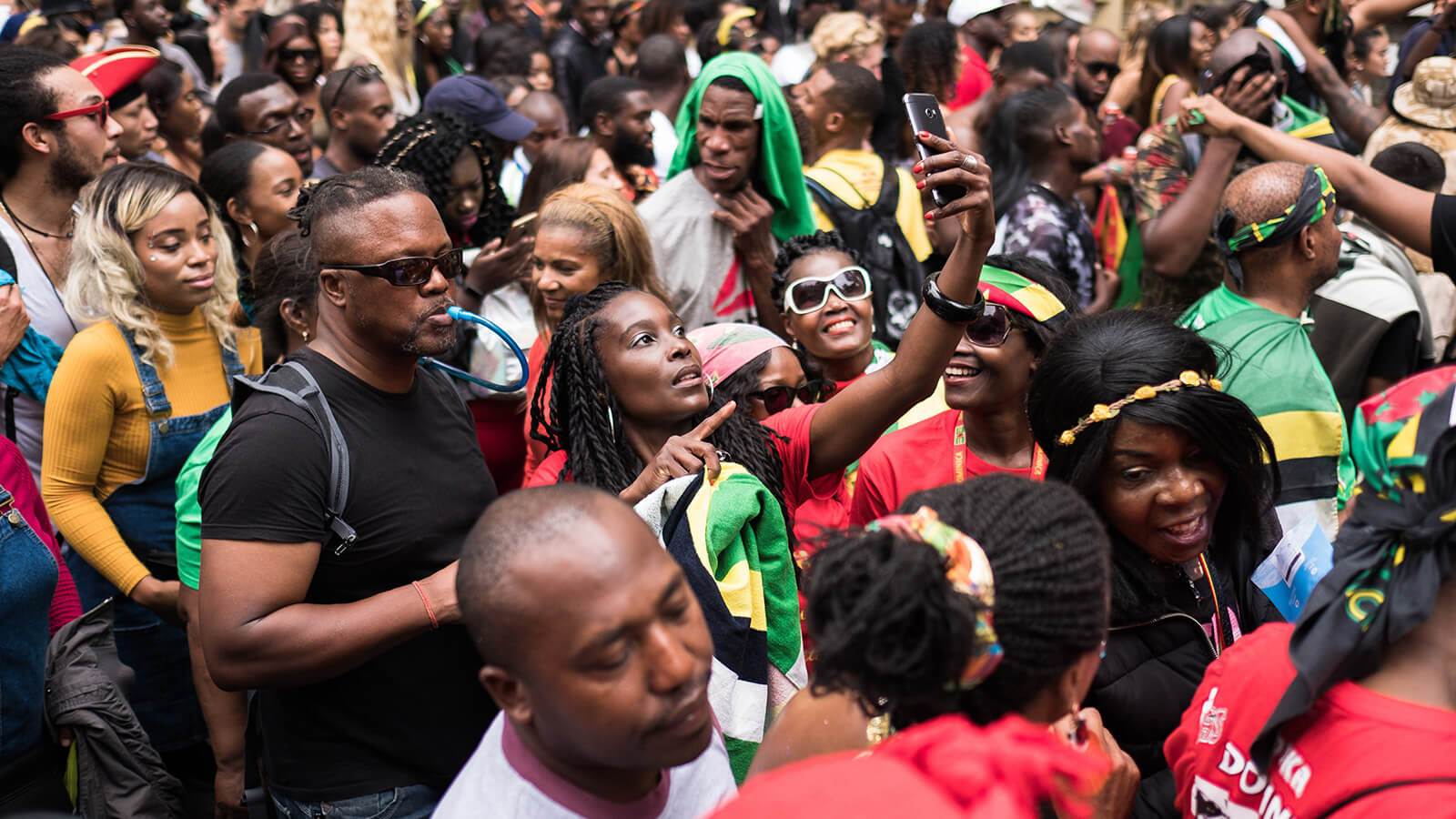 Carnival, Blackness and the Precarity of Public Safety

Sharine Taylor on the role of Carnivals in nourishing public health, cultural vitality and Black liberation.

It’s in the streets that we both find and create our liberation. Historically, they have been among the many sites where Black people across the diaspora have turned to in order to relieve their collective anxieties with and within the state and its systems. The streets are where we have fought for and achieved our rights, dreams, desires and needs. One of the myriad ways that we can see this in practice is through Carnival.

For the unacquainted, the Afro-Caribbean roots of contemporary Carnival reflect an ancestral tradition grounded in our journey towards emancipation and enacted as a means to reclaim our time during the colonial era. Although the histories and conceptions of Carnival vary among countries within the region, once-enslaved Black people collectively invested in their immediate and future joy, as well as in the protection and safety of their communities, using music and dance to score their movements in the streets. 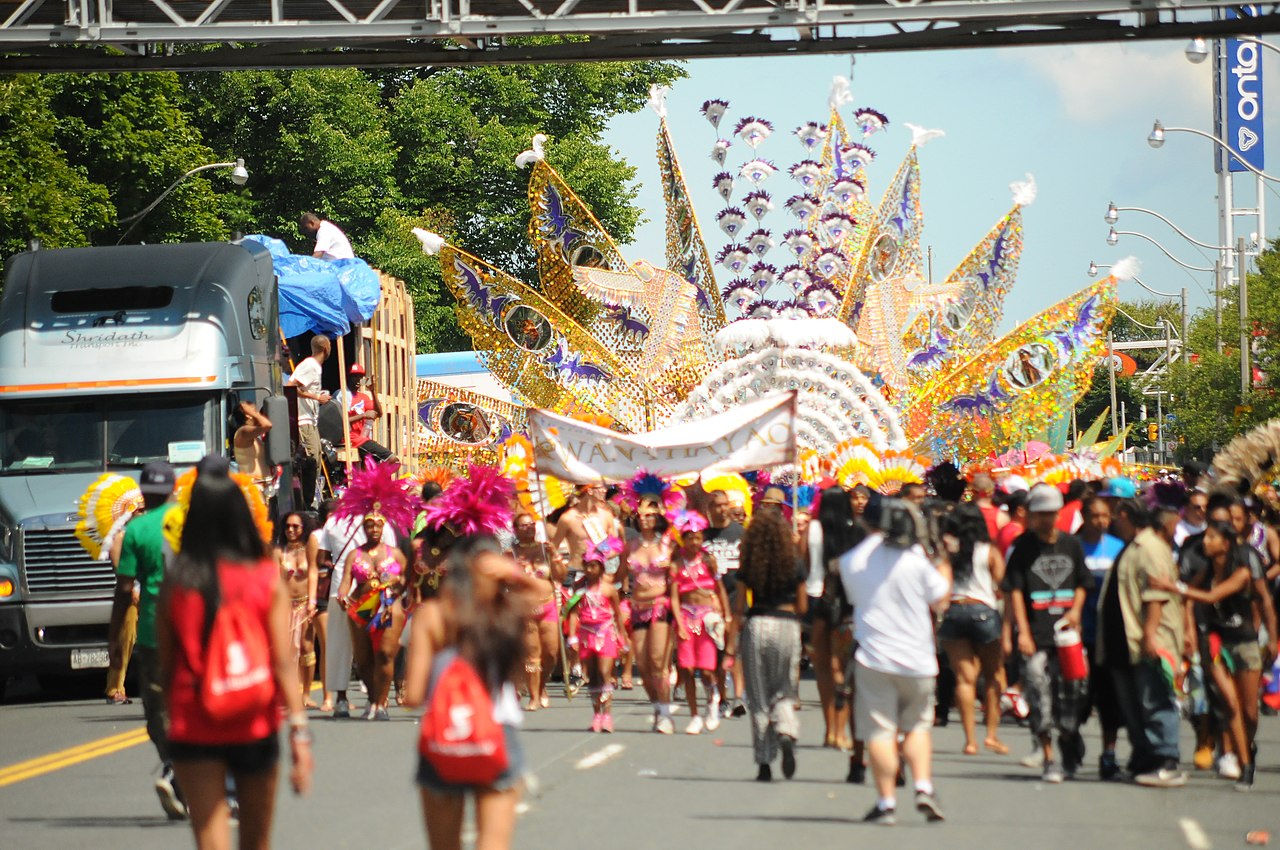 In contemporary iterations, descendants of those same people pay homage and celebrate the legacy of their countryfolk from the past by playing mas. The roads and streets that connect the city are temporarily transformed into a catalyst for masqueraders to connect with each other.

Large feathers and magnificent jewelled costumes uniform the jovial song, wine, wukkup, dance and total abandonment of life’s worries. The lore of work, school, family, friends and obligations fades away. In the diaspora, particularly in cities like London (with its Notting Hill Carnival), New York (the West Indian Day Parade) and in my own city of Toronto (Caribana), we recreate feelings of home as we claim space in our new geographies, honouring and acknowledging the labour of our ancestors and reimagining what our liberation could be.

This is why prioritizing the safety of the people who participate in this practise — particularly Black people — is a public health issue. When our safety is negated and our means for engaging in this practise is disrupted, our health and ability to express our culture is at stake. Simply put, if our streets are not safe to play mas, then we are not safe to play mas.

Safe in Public Space is a Bentway initiative that takes a deep, critical look at safety and equity in public spaces everywhere. It unites a passionate group of creators, artists, activists, researchers and other partners working together to develop new practices and strategies to ensure safer public spaces for all. The initiative includes a series of critical essays co-published with Azure. For more information, visit: http://thebentway.ca/safe 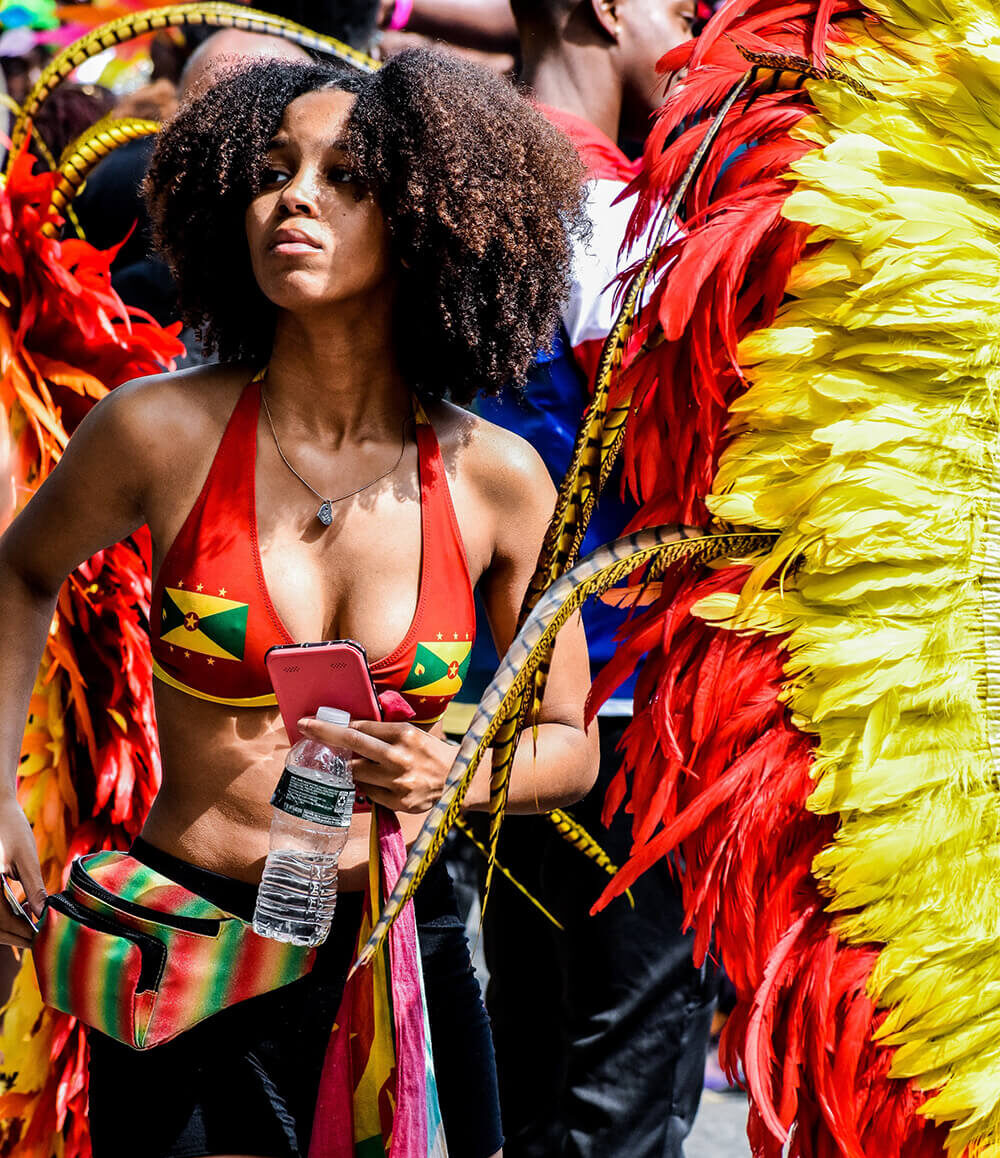 Despite the endurance of our cultural production around the world, Blackness and the precarity of safety are inextricably linked. As a Black person and woman, this has been my experience in private spaces – and one heightened in public ones. Especially so as a person with Caribbean heritage who participates in Carnival. Playing mas has always been an opportunity for me to experience euphoric salvation. Black-skinned, sun-dipped and soca drenched, I make my way through the host city. But even with the gleeful illusion of safety, I’m always reminded of my Blackness, I’m always reminded of my womanhood.

I don’t ask these questions to pander to decency or to consider what answers may form under the white gaze. I ask these questions because they relate to material consequences. Outside of Carnival, our conception of safety is already fragmented. Each year I adorn myself in a costume, I contemplate the tension and fragility between what solace and violence playing mas on the road may bring.

In Caribbean parlance, “stormers” — people who attend the parade in plain clothes with intentions of damaging costumes and infringing on the personal space of masqueraders — are a mainstay in many carnivals, particularly Toronto’s Caribana. In an effort to curtail their actions, fences ranging from four to twelve feet tall were first erected in 2009, effectively placing masqueraders within the boundaries of tall steel barriers along our route. Under the guise of security, Black bodies in movement became a spectacle to a mostly white audience who paid admission to gaze, to watch, to stare, to interrogate, to smile, to laugh, to point, to fetishize. 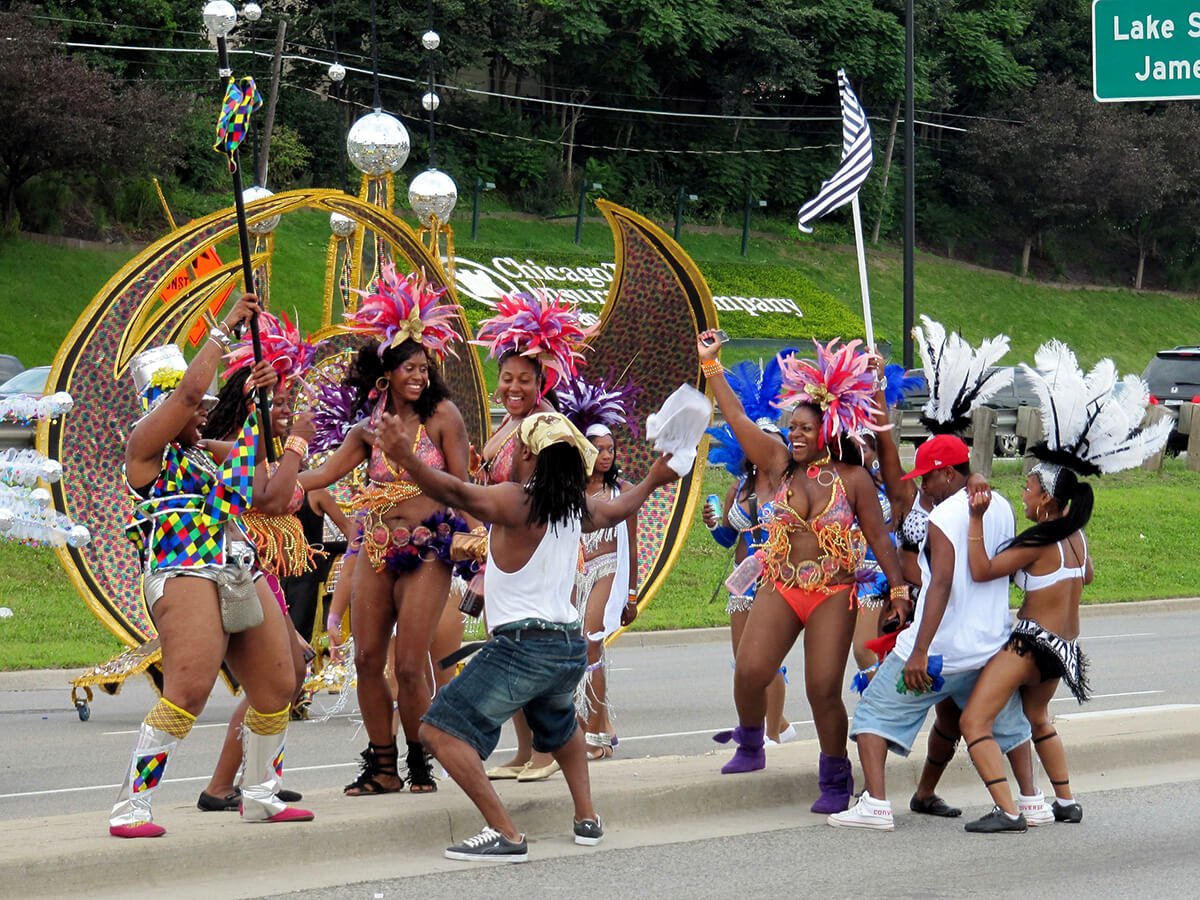 The optics are bad and the feelings are familiar. And while Toronto’s crude steel structures were removed eight years later, the question of our safety still lingers with each passing summer.

Carnival is a place bound up in possibility. Individually and collectively, the roads and streets that we march along embody this ethos. Yet at any given time, a public official or a government document can reclaim streets as property, asserting the state’s power to deem what is and is not permissible. But Black people across the world, despite their circumstances, have mastered the art of subversion to create alternative realities — ways of living and ways of knowing — so we may find peace, joy and community in whatever spaces are available to us.

Mundane roads become vital public forums where Black people engage in reclamation, championing the futures they seek for themselves and future generations. In 2020, the streets became pathways to freedom as demonstrations for collective liberation became the fuel that powered a global movement. Saying the names of people slain by the state, Black people around the world took to the streets for our revolution.

But we were met with resistance from the state and from groups whose views and goals were antithetical to ours. So when the state met us with violence, harm and threats to “take back the streets,” we were shown who is and is not meant to be seen, who is and is not meant to be protected and what activity should and should not happen in public space. Because even when we try to reimagine or create new temporal realities, our new worlds often end up becoming microcosms of an unjust society, in turn perpetuating the same kind of violence we stand against. The irony is much more jarring when we consider the roots of many Carnival processions as a direct pushback against injustice. 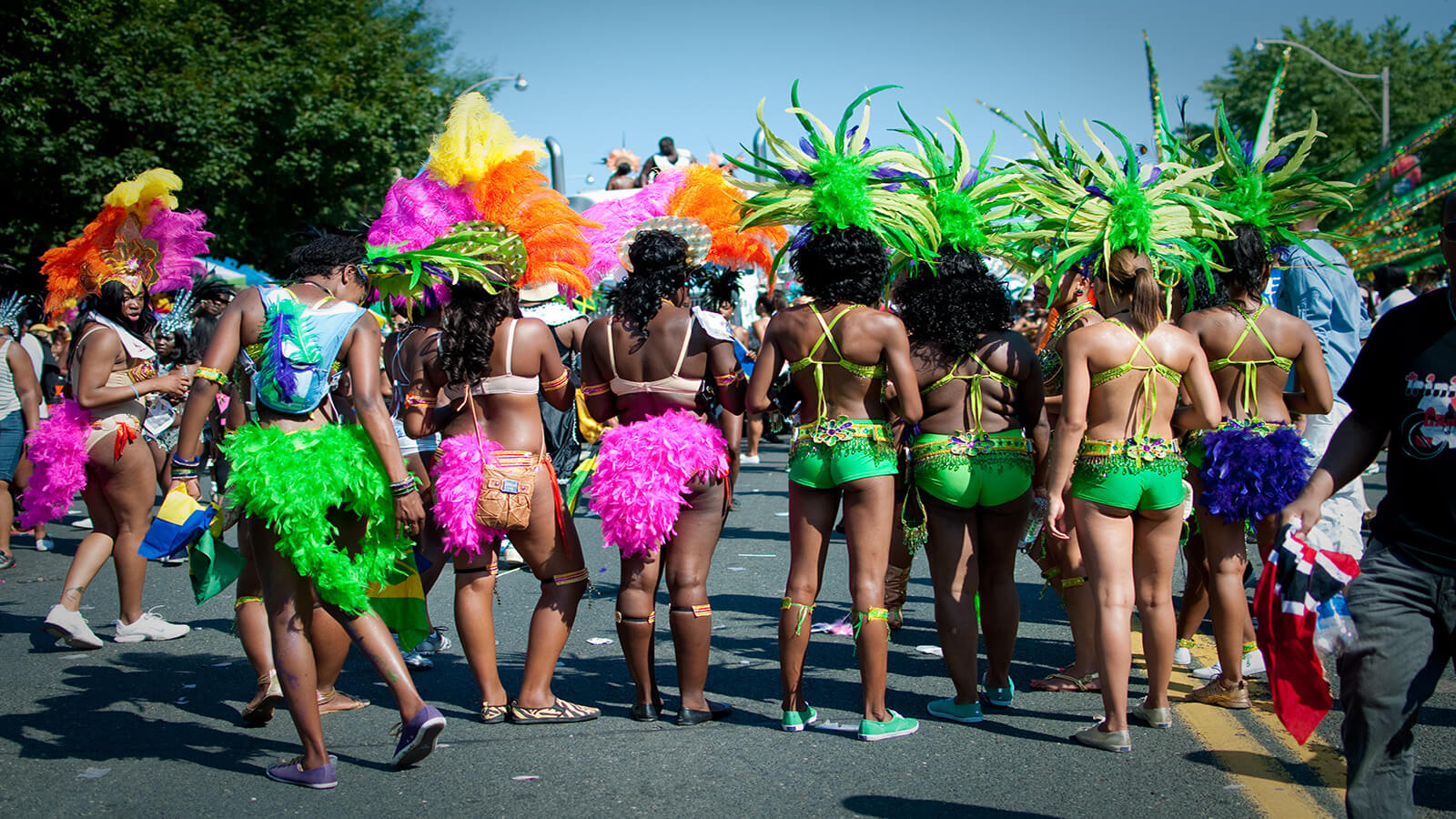 Sometimes we end up travelling paths familiar to us even if we’ve never walked down them before.

With dwindling spaces in the city for its Black residents to call their own, Toronto’s Caribana exists as among the last vestiges that many of us have to express our culture on a public scale. But with Carnivals around the world (including Caribana) cancelled over the past year and into this one, the pause gives us a moment to see how we can actualize our wants and needs for safer spaces for us to participate in our traditions. If a fraught set of negotiations concerning our safety persists, it not only ruptures our attachment to the city, it also stifles our ability to engage with and continue the traditions of the people before us.

It is clear that much is at stake. Streets and roads are a lifeline, offering a vital conduit for Carnivals the world over. It is imperative that we mobilize towards honing in on what safety means for masqueraders. Prioritizing true safety is not just a means of ensuring the physical welfare of participants, it is a commitment to preserving and protecting people and culture.

Sharine Taylor (she/her/hers) is an award-winning, Toronto-based writer, critic, editor, producer and director, as well as the Editor-in-Chief and Publisher of BASHY Magazine.

Sharine Taylor on the role of Carnivals in nourishing public health, cultural vitality and Black liberation.