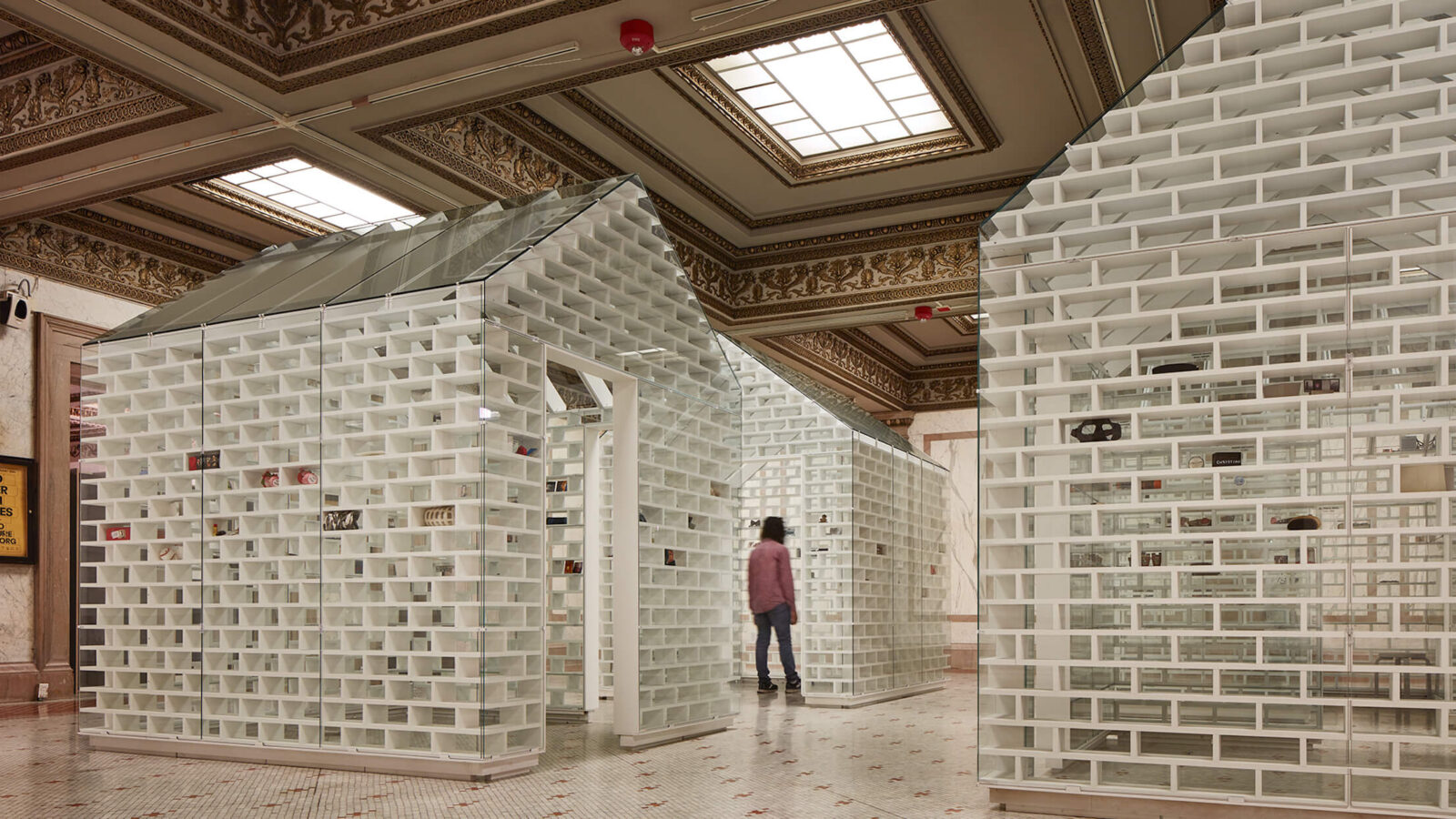 Opened this week, the biennial’s third edition examines architecture as a social and political force.

On the grand stairway of the ornate Chicago Cultural Center, the text of a new Land Acknowledgment opens with a sober proclamation. “Chicago is part of the traditional homelands of the Council of the Three Fires: the Odawa, Ojibwe and Potawatomi nations,” it reads, reminding visitors to the 2019 Chicago Architecture Biennial, which is headquartered in the building, of the city’s original occupants. In doing so, it sets a powerful context for understanding both Chicago and the exhibition inside.

The 2019 edition of the biennial marks its third iteration under the theme “… and other such stories.” The curatorial team describes the event as a prism “through which to reflect upon social, geopolitical and ecological processes.” In other words, this is not a biennial of technical drawings, scale models and architectural jargon. Bringing together 80 exhibitors from 22 countries, the ongoing Chicago Architecture Biennial is a provocative – and essential – interrogation of architecture as a social and political force. Here are five standout installations that reflect that mandate.

We’ve seen a number of “innovative” responses to gun violence of late – bullet-proof backpacks, school buildings designed to minimize deaths during mass shootings – that can only be described as defeatist and depressing. Designers are clearly struggling with a brief that should really be the domain of policymakers. One bright light in the fight against gun violence, however, is the activism being undertaken by survivors, victims’ families and ordinary citizens: The Gun Violence Memorial Project, a powerful expression of activism and awareness, was co-created by MASS Design Group (best known for the National Memorial for Peace and Justice in Montgomery, Alabama) and New York artist Hank Willis Thomas. Created in partnership with the gun-control advocacy groups Everytown for Gun Safety and Purpose Over Pain, the installation takes the shape of four pitch-roofed, glass-sheathed houses – safety, fragility and Americana coalesced into a heartening statement.

The building blocks are voids representing the number of gun-related deaths that occur in a single week in the U.S. (in Chicago alone, 363 people have been killed by firearms since the beginning of 2019) and members of the public are invited to fill them with their mementos. “Every time someone is killed by a gun in this country, there is a ripple effect of quiet collective trauma that billows through our society,” Thomas wrote on Instagram. “We see this installation as a call to action and reflection. Our hope is to create a space for public healing, atonement and acknowledgment that we as a society can and will do more to honor the lives of those lost to this epidemic and change the future.”

The issue of private and public rights of Chicago’s lakefront are actualized in Three Trees: Jackson, Obama, Washington by Walter J. Hood. The outdoor installation speaks to the ongoing controversy surrounding Chicago’s planned Obama Presidential Center. Local preservationists sued the city, fighting against the decision to build the the presidential library in Jackson Park. The case was ultimately dismissed, but Walter’s Hood Design Studios is a subtle reflection of the lingering tensions.

With the aim of making “urban spaces and their objects act as public sculpture” and of eliciting feelings of renewal and memory, the trees used were transplanted from Chicago’s South Side to the Chicago Cultural Center. Emerging “out of the mulch of decay,” as Hood puts it, the trees embody a sense of renewal while exploring how cultural memory can reside in landscape and survive being uprooted.

What a difference a century makes. These days, public libraries are among the first institutions targeted by neo-fascist politicians looking to cut costs. At the turn of the 20th century, by contrast, governments and wealthy philanthropists were actually erecting libraries in order to educate the masses. Sure, many of these buildings were often completed in an attempt to “civilize” a mixed bag of immigrants, workers, socialists and anarchists seen as societal threats. But still the powers that were saw the value of such investments, perhaps not realizing that knowledge is power and that more knowledge can lead to even more individual power.

It was with an eye on subjugation that, in part, the Windy City’s first central library, the Chicago Cultural Center, was opened in 1897. That’s what makes the landmark edifice the ideal site for Adrian Blackwell’s Anarchitectural Library, a pop-up resource centre containing material that the Toronto artist and theorist solicited from 20 organizations and individuals “committed to combatting the erasure of Chicago’s common spaces,” from libraries and schools to social housing, manufacturing districts and parks. In addition to promoting what these people and groups are doing to stem that tide, Blackwell’s handsomely designed, judiciously stocked installation equips visitors, through information and inspiration, to contribute themselves, making it the perfect combination of cause and context, rumination and rallying cry. And, like many of the Canadian’s visionary projects, a must-visit.

With no centre and no sense of resolution, labyrinths are inherently unsettling; in a maze, there is nowhere to settle. The initial sense of discomfort, though, gives way to new perspectives. The journey through the rootless space challenges notions of “settlement” – and by implication citizenship – as visitors move through the space. What happens to our identity when we are divorced from context and from a sense of place?

Inspired by the notion of an anti-materialist, “placeless” labyrinth city envisioned by the mid-century Situationist International movement, Belgian artist Vincent Meessen’s SIISIS suggests that identity can be predicated on movement rather than heritage and roots. It’s an oblique and provocative notion, but one that takes on immediate meaning when interpreted through the lens of refugee rights and citizenship. Shouldn’t being there be enough to belong? Perhaps there is liberation in the labyrinth.

How Together is a process. Centred around an open communal space, the installation is designed to host public programs and workshops throughout the biennial’s four-month run. Framed by a striking public wall that displays the voices of various contributors as well as visitors and members of the public, the living exhibit continually evolves as more voices are added.

A spirit of grassroots activism pervades the space, with boldly painted quotes and questions (in multiple languages) surrounding the central agora. Design firm ConstructLab also provides a manual – described as an anti-manual – to help users transform the experience. The installation’s spirit of community-led interrogation is central to to the Chicago Architecture Biennial’s ethos of participatory creation.

The Chicago Architecture Biennial is on until January 5.

Opened this week, the biennial’s third edition examines architecture as a social and political force.