The Art Installation that Took Over Coachella
Reflection Field, which artist Phillip K. Smith III erected at Coachella in April, transformed the music festival into a visual spectacle. 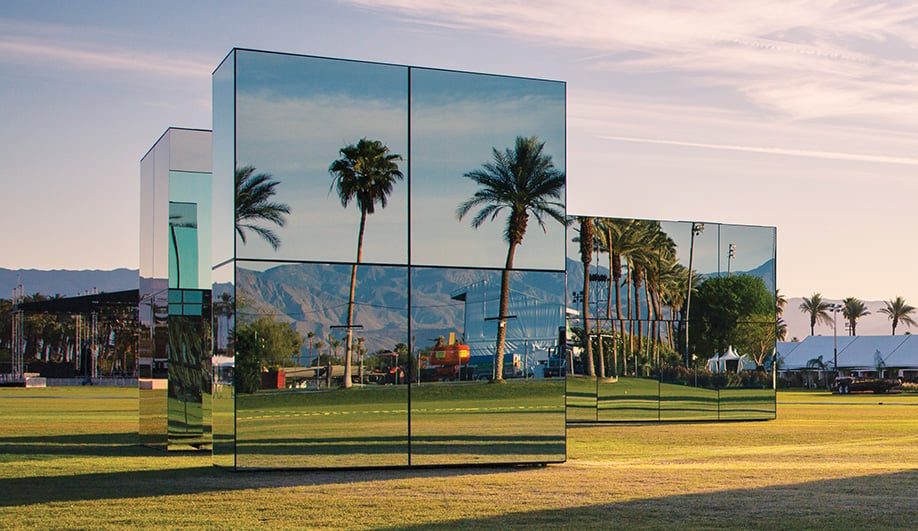 For the first time since the Coachella Valley Music and Arts Festival’s inception in 1999, this year’s event poster announced visual artists alongside long-celebrated bands and DJs.

Installed on the polo field that serves as the main stage, Reflection Field justified the prominent billing. The commission, by local artist Phillip K. Smith III, comprised five mirror-clad steel frames reaching over five metres into the sky. LEDs hidden inside the volumes illuminated the mirrored shells, with the tiny lights projecting gradients and sequences of colour according to programming created by Smith.

Besides rivalling the main stage, and per­form­ers ranging from rockers Graveyard to vocalist Lorde, the totems proved as thought provoking as any song. By day, they acted as screens, virtually multiplying hundreds of thousands of ticket holders; come nightfall, the glowing beacons served as a landmark. Throughout the event concertgoers flocked to the volumes with phones outstretched; yet after snapping selfies, they quietly beheld the reflected sea of activity and the immense desert enveloping it.

The monoliths inspired internal reflection as well, perhaps most palpably at sunrise and sunset, when the washes of LED light merged with images of the crowd and the natural spectacle taking place overhead. While this restrained introspection recalls James Turrell, Robert Irwin and other modern masters of perception, it also evokes much older precedents, such as The Arnolfini Portrait (in which medieval painter Jan van Eyck inserted himself in the reflection of his subjects’ convex mirror), suggesting that, regardless of time or medium, art strives to explain our place in a wider world.