This Compact Home Holds the Key to Densifying an Australian Suburb
On a suburban lot in Western Australia, architect Kate FitzGerald and her firm, Whispering Smith, craft a lean, design-forward house – with room for one or two more. 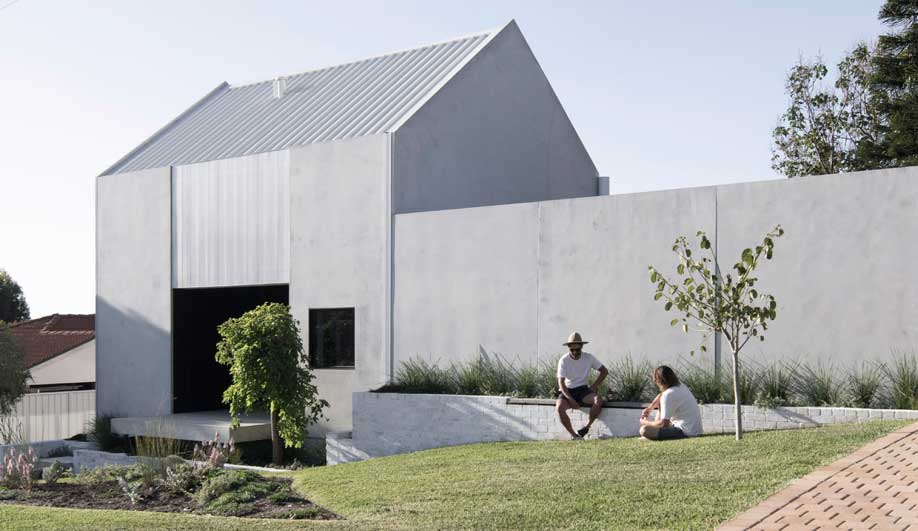 On a suburban lot in Western Australia, architect Kate FitzGerald and her firm, Whispering Smith, craft a lean, design-forward house – with room for one or two more.

As you travel through the seaside city of Scarborough, just outside Perth in Western Australia, you encounter the tell-tale emblems of suburbia: large bungalows and two-storey homes with expansive front lawns. Then you notice a light-grey silhouette poking through the tile roofscape. Perched on a hill overlooking the coastline, the house is so slender it resembles an envelope pushed skyward. Look closer and you’ll discover that the dwelling is, in fact, all about pushing envelopes. 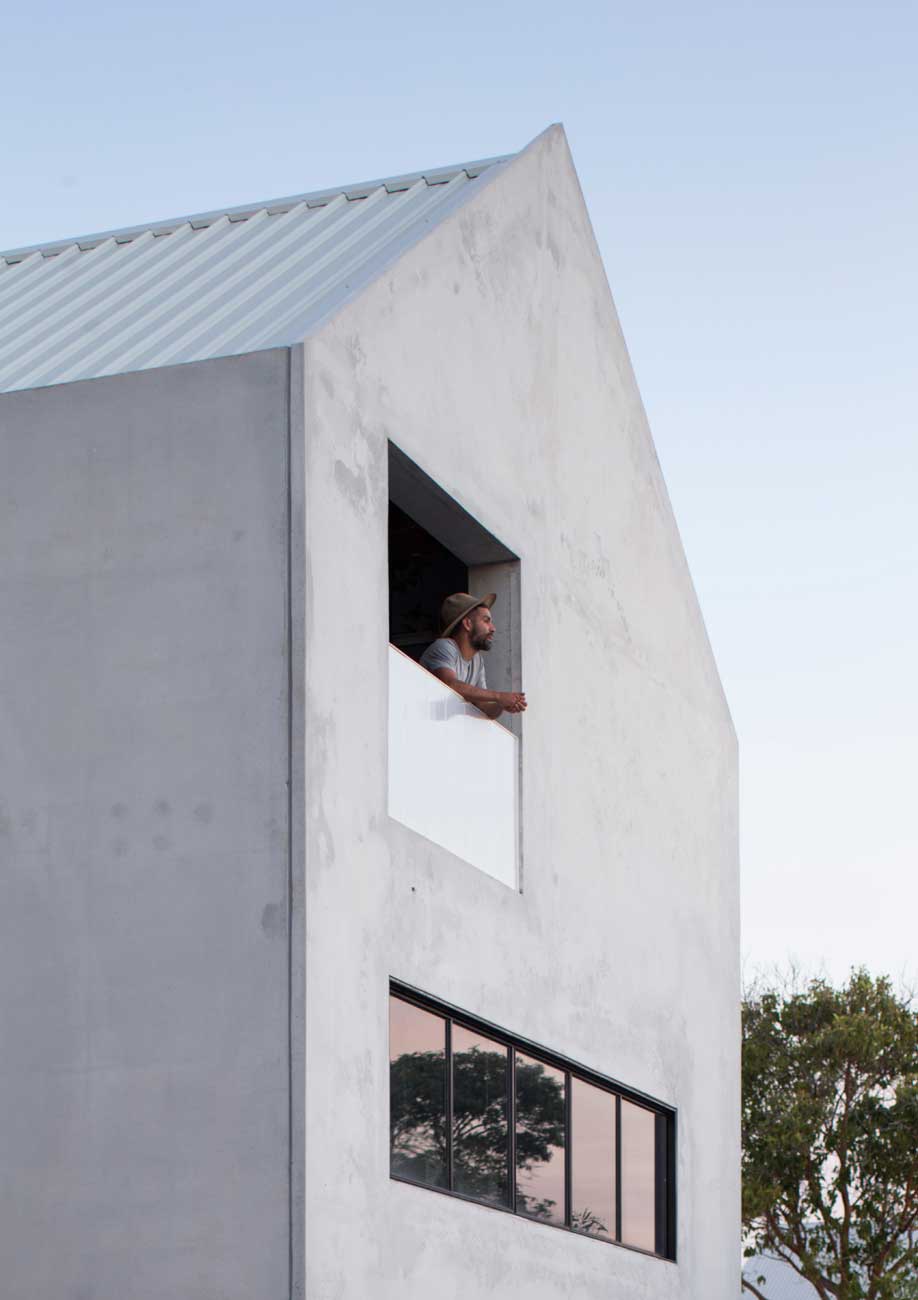 Both the envelope and interiors of House A, with its concrete massing, corrugated metal roof and polycarbonate screens, emphasize hardworking, unfinished materials.

Designed by Kate FitzGerald, founder of Perth-based studio Whispering Smith, for herself and her partner, Matt, House A, as it’s known, is a single-bedroom home with a single-minded focus on testing new ideas. Every design decision – from the carefully considered floor plan and the simple, durable materials to the minimal colour palette and the unadorned surfaces – makes the point that less really can be more in a culture that tends to equate bigger with better. “The reality,” says FitzGerald, “is that young people today can’t afford big houses or big land.” She and her partner, both in their early thirties, were no exception. So, to create their ideal house, they turned every unwritten rule on its head. 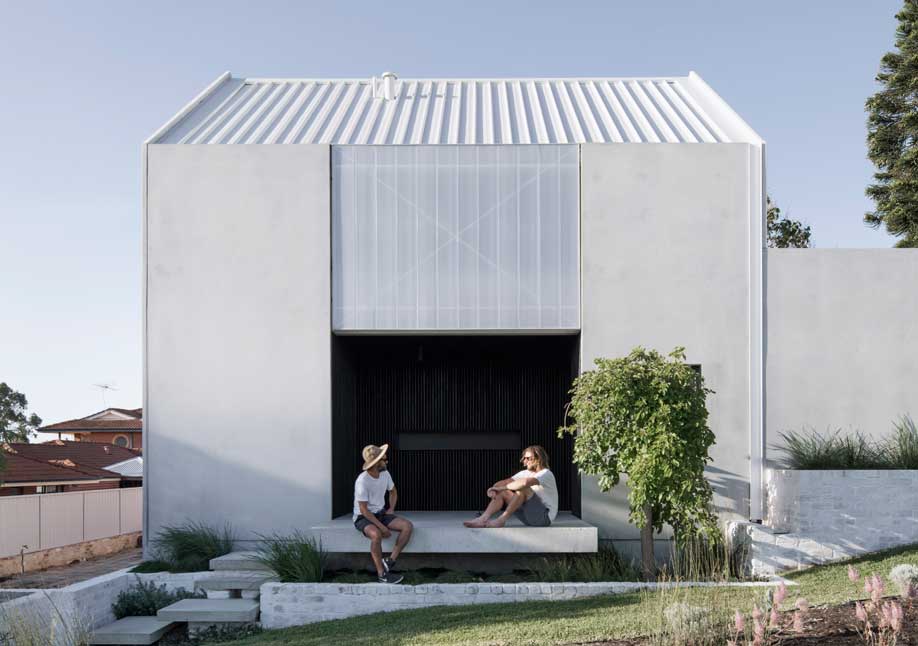 Built on the subdivided lot of an existing property, House A breaks the boundaries of the acceptable lot size by shrinking them. “The debate about density in Perth is raging,” says FitzGerald. “It’s very political, because people don’t want to be inundated with more bad housing that isn’t designed to fit smaller sites.” She explains that the 1950s house originally on the lot, which she and her partner bought with the help of her father and which is currently under renovation as House B, had the typical suburban swath of lawn.

“We split the front portion of the yard off into a 175-square-metre parcel for House A,” she says. As a result, the house is more accessible and better connected to the street than the existing structure was. Another new build, House C, is now in the works on the same lot. Developing three houses on a single tract while maximizing quality and sustainability has made FitzGerald’s ongoing project a case study in densification and a model for government bodies and designers alike. 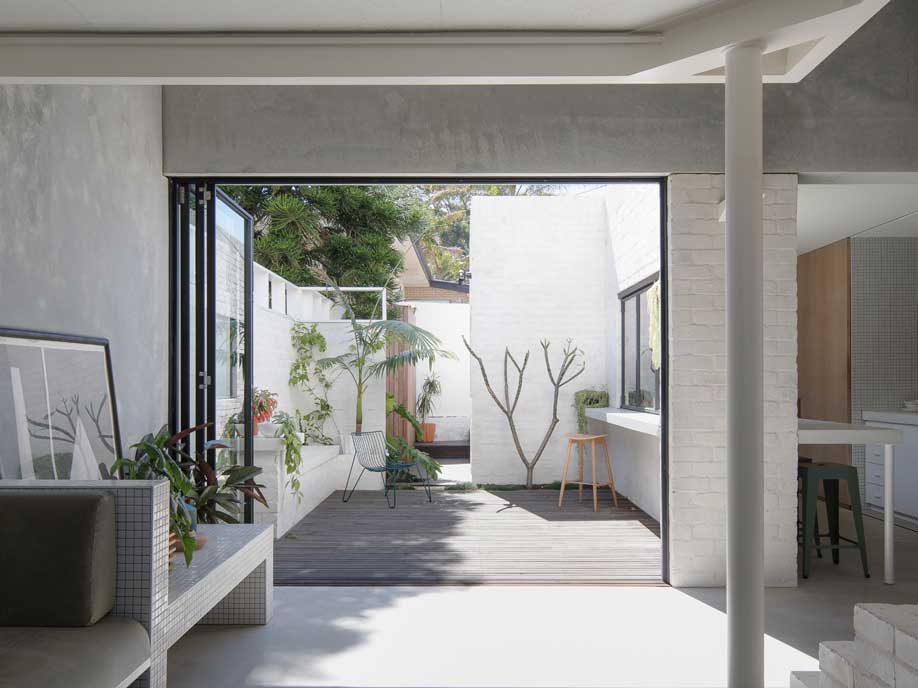 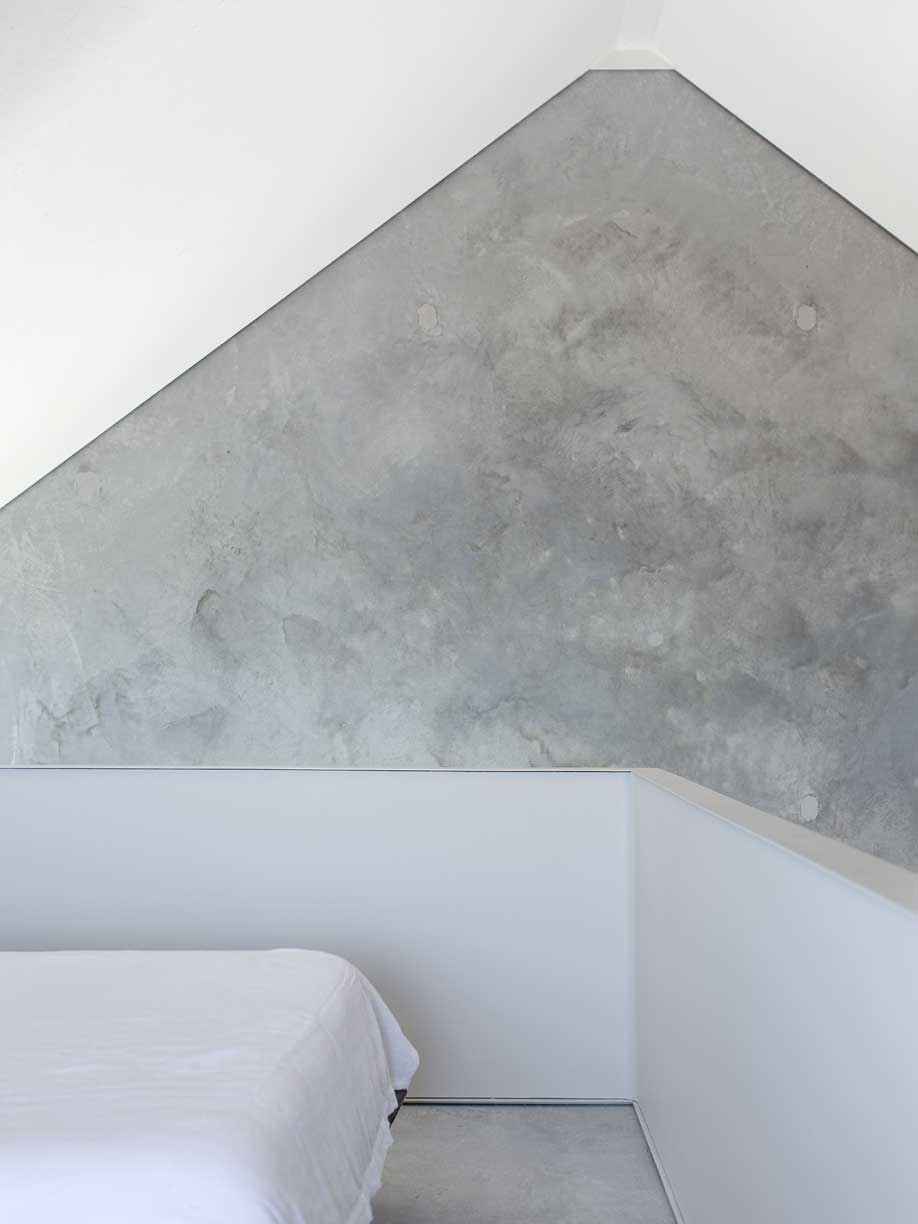 Located on the mezzanine, the single bedroom is, like the rest of the home, doorless and open plan.

The focus on making the most of a small footprint continues inside House A’s slim concrete envelope. High ceilings and a mezzanine level make the 70-square-metre home feel bigger, while the open plan allows views from one room to another. On the ground level, the public areas spill into one another over a narrow layout – the recessed timber entrance (accessed via a generous cut in the concrete facade) and adjacent living room flow into the kitchen, beyond which, around a corner, is a study or second bedroom.

Natural light and cooling breezes stream in through the central courtyard, which is walled-in, fenestrated and connects to a deck that wraps around the study/bedroom. Thanks to these passive design measures, the carbon-neutral interior requires no artificial lighting or air conditioning. On the mezzanine, the bedroom and ensuite bathroom receive natural light through the translucent polycarbonate screens that shade the openings and elevate the home’s modern quotient. 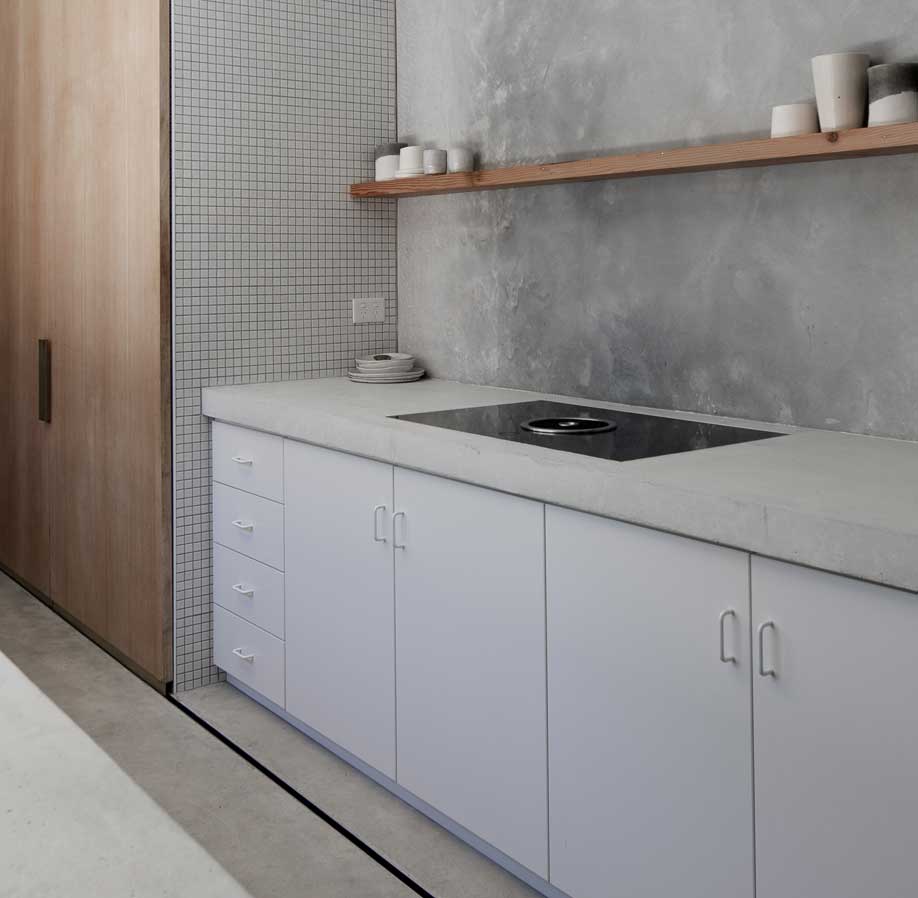 The main level’s kitchen exemplifies the architects’ use of a muted material palette: untreated wood, tile and concrete. 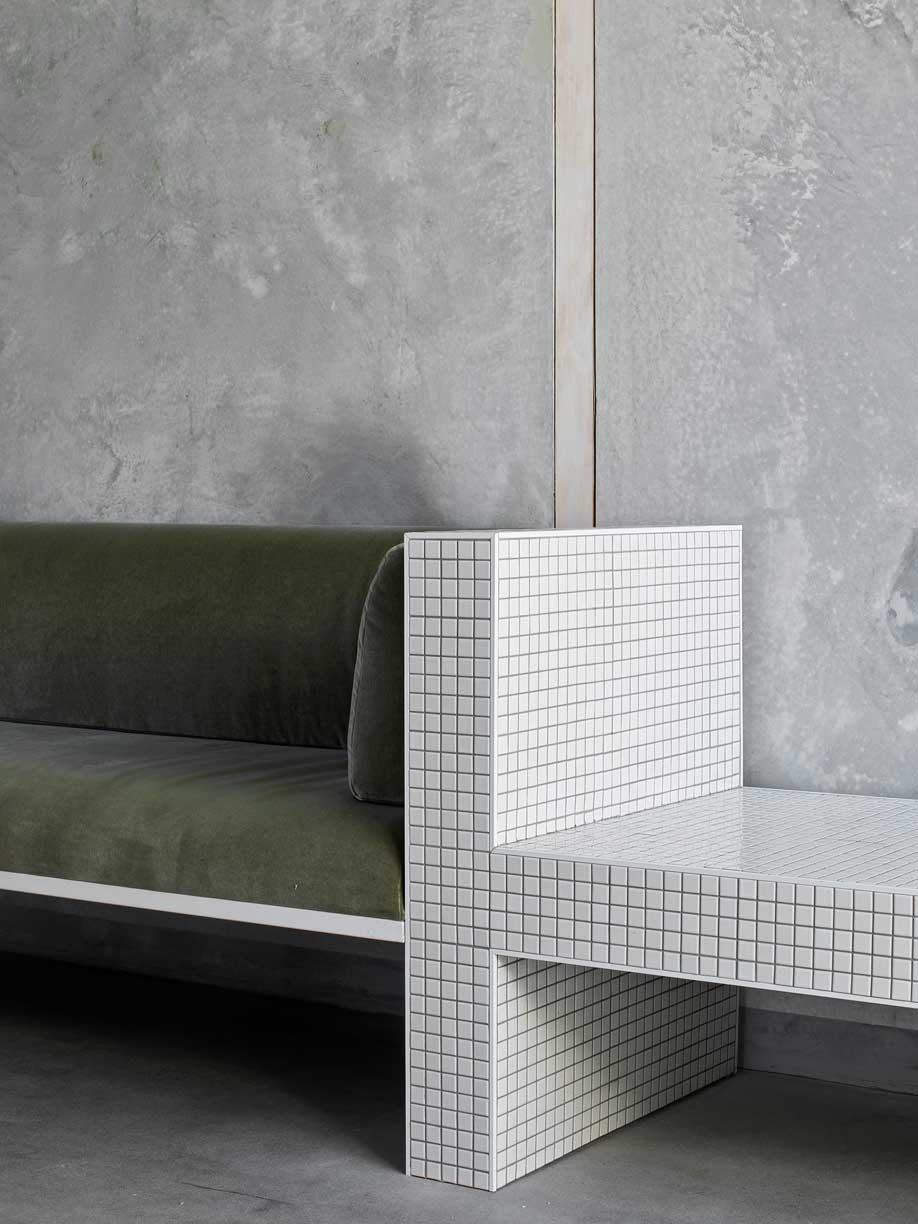 The custom-created furniture has an art-gallery vibe thanks to the creative use of tile.

Throughout the project, the team used eco-friendly materials that look best unfinished. “If you design with great attention to such details as textures and junctions between surfaces, there is no need to cover up your work with, for example, drywall. Instead, we used natural materials that were left bare,” FitzGerald says. This is how they created a warm and soft feel despite using a simple palette of recycled brick for the walls, untreated wood for cabinetry and tile and concrete for much of the custom-built furniture. “The tile was a way to add polish without fussiness,” explains FitzGerald. 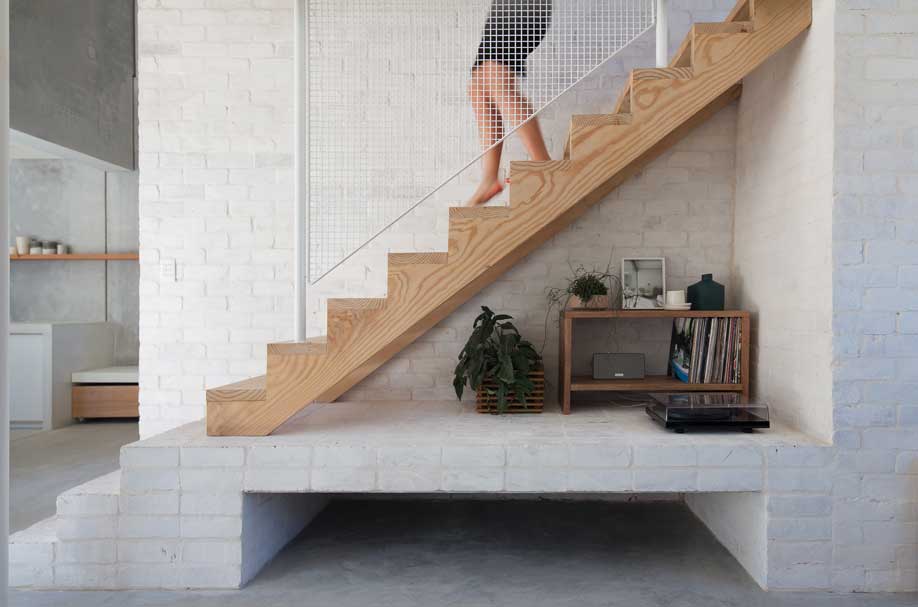 Just beyond the entrance, the white-brick and wood stairway leading to the mezzanine feature a railing made of wire mesh.

Poured on-site and lifted into place, the concrete panels that embrace the house incorporate a high amount of slag and fly ash. “Concrete is carbon intensive; with this aggregate, we were able to reduce the carbon footprint,” she says. “I think those panels might be the feature I’m most proud of. There are no air gaps; they’re the same on the outside as on the inside. For a massive structure, they are so thin – yet they’re monolithic.”

Already, House A has become a sort of monolith in its own right – a new paradigm, typology and prototype to move architecture and housing developments in Western Australia forward. As FitzGerald puts it, she and the team behind House A aren’t just change-makers: “We are future-makers.”