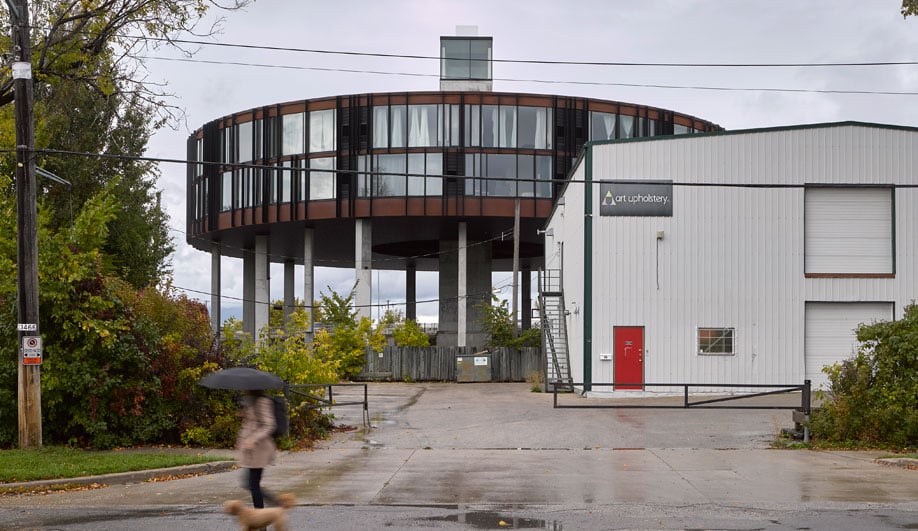 Consisting of 40 prefab wedge-shaped units (not to mention Winnipeg’s coolest Airbnb suite), a uniquely circular condo building by 5468796 Architecture has become an unlikely icon on the Prairie city’s skyline.

Everyone in Winnipeg has their own name for it – the flying saucer, the UFO, even the hockey puck. But the official name of the floating disc on the fringes of the city’s downtown, which happens to be a condominium complex, is 62M. Designed by 5468796 Architecture, a local firm led by partners Johanna Hurme, Sasa Radulovic and Colin Neufeld, the building is composed of two layers of 20 pie-shaped apartments resembling Trivial Pursuit game pieces, scaled up to a diameter of 42.7 metres and then planted on 20 sculptural columns (each column is 9.8 metres tall) radiating around the building’s perimeter.

Developed to house entry-level condos of just under 57 square metres each, the uniquely shaped structure is one of the most innovative residential buildings to have been built in Winnipeg in a long time – and has become an unexpected fixture on the city’s skyline. 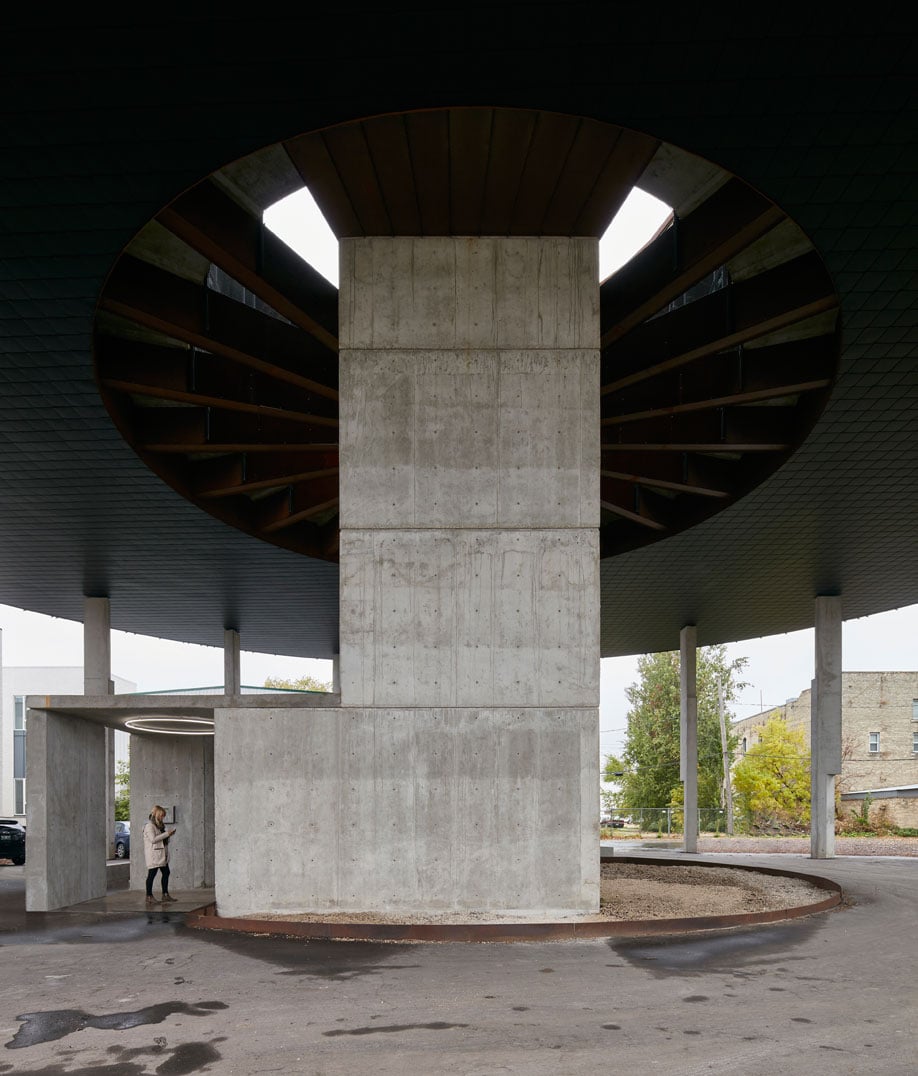 Entry to the 62M condo complex is through its central concrete column, which houses a stairwell, an elevator and a mechanical shaft. The residences are perched on 20 pillars nearly 10 metres tall.

“We weren’t chasing iconography,” Radulovic insists. “The distinct shape came from trying to resolve the challenges of both the site and budget.”

“In fact,” Hurme adds, reinforcing the point, “we hated the idea at first. Who is going to propose a round thing on stilts? The more we studied it, though, the more sense it made.” 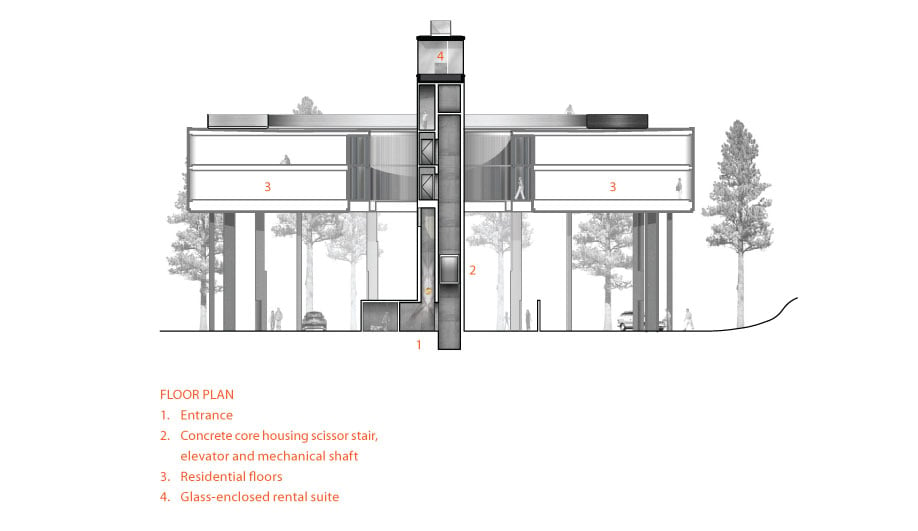 The design challenge began with the building’s marginal site, wedged between industrial sheds and other low-rise buildings at the base of an elevated freeway. Its only access is provided by a small dead-end lane purchased by the developer from the city for a pittance. 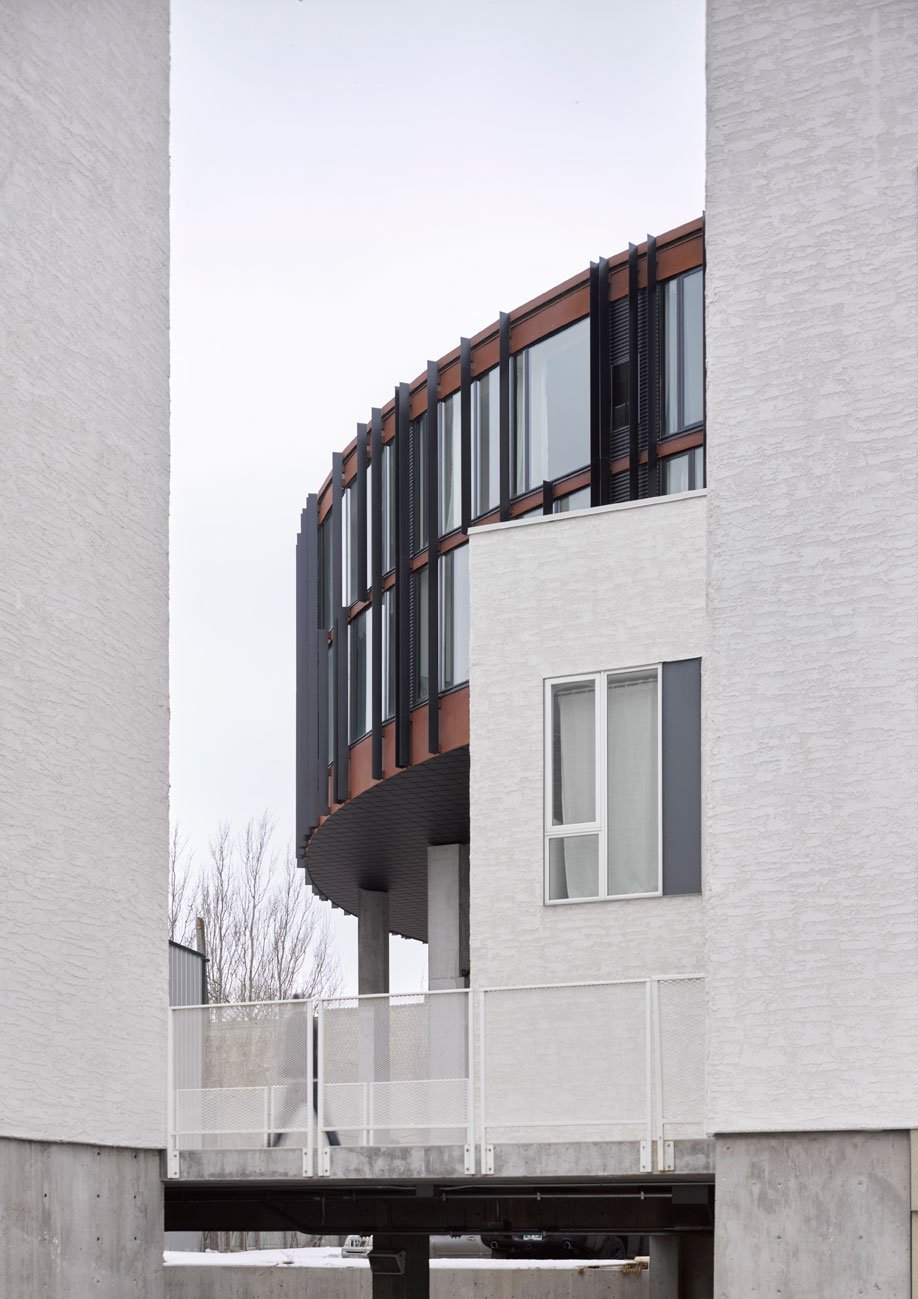 The metal fins circling the facade appear randomly spaced but were carefully configured to avoid a faceted look.

The designers’ first big move (associate Ken Borton was also on the team) was to elevate the building from its landlocked cavern to provide access to the daylight and views appropriate for a residential building. This radical solution, however, immediately created other challenges, cost being the most prohibitive. To make the budget work, efficiency became critical. After exploring several different configurations, it was determined that a circular building could enclose the required square meterage using 30 per cent less exterior envelope than rectilinear shapes would need.

This configuration also allowed the widest part of the pie-shaped suites to be at the exterior wall, offering panoramic views through almost six metres of floor-to-ceiling glass, with each suite only requiring 2.3 metres of common corridor at the narrow end. 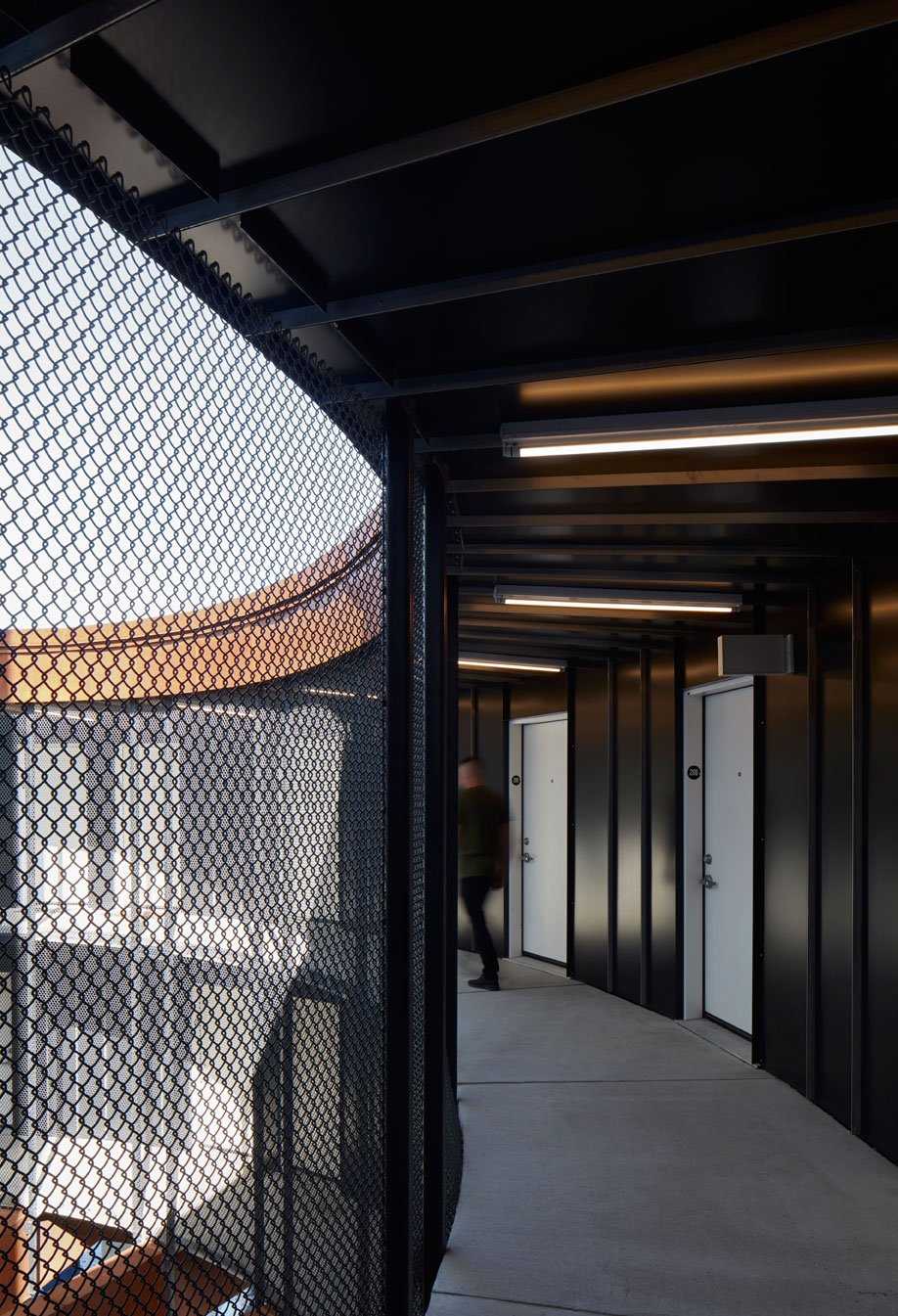 “Our next challenge was to convince trades and contractors that, once you got up to the platform, the cost shouldn’t change because it would be no different than building on the ground,” Hurme explains. “Prefabrication became the key to making this work.”

Indeed, the uniformity of 40 identical pie-shaped units made prefab an ideal construction solution. A rectangular concrete core – housing a central scissor stair, elevator and mechanical shaft – provides support for the raised circular steel platform. The prefab wall and floor panels, constructed off-site by Holz Custom Prefab, were organized into manageable, transportable segments that were raised and installed individually to form the units. 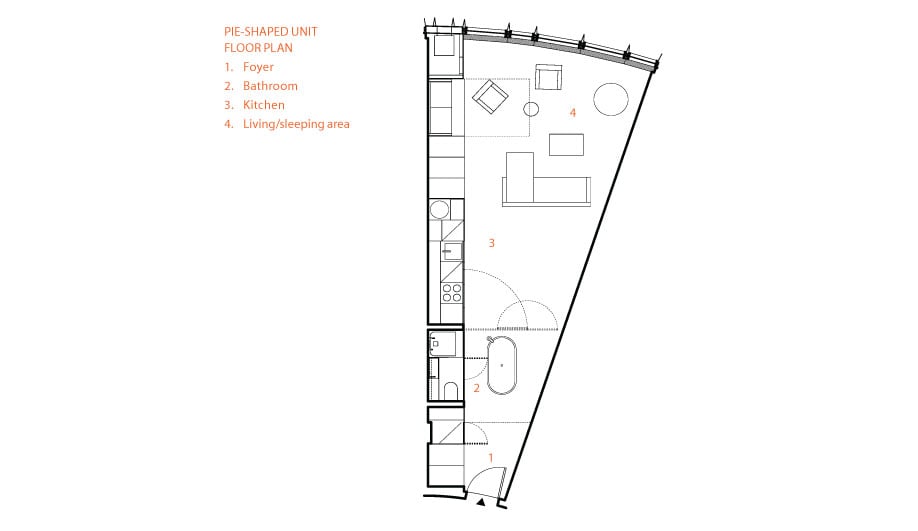 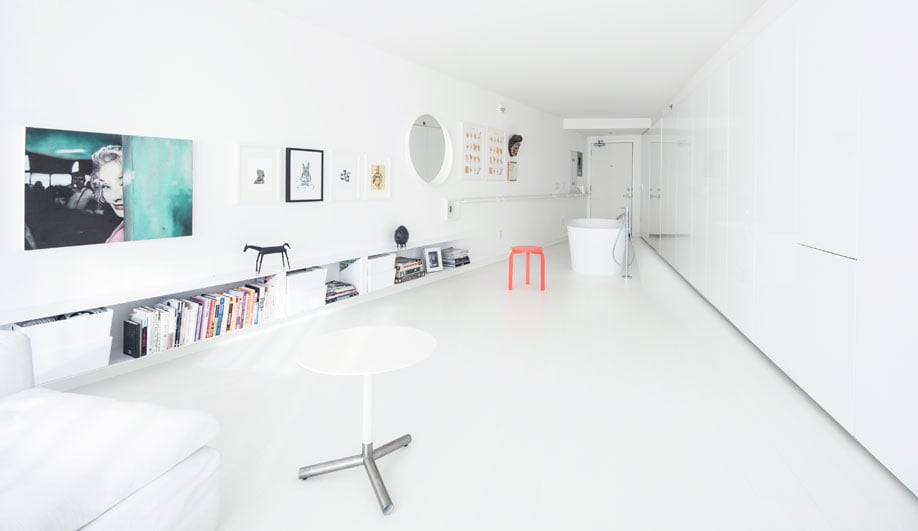 Although the wedge-shaped units range from open-concept models to suites with defined spaces, the washrooms, kitchens, laundry facilities and storage areas in each are aligned along a single wall.

The finished suite configurations range from an open loft style to more defined interior spaces, each with services, storage, a full kitchen, a laundry area and a washroom all aligned along one wall. The refined, clean lines of the suites are contrasted by a raw palette of materials on the exterior. Weathering steel and chain-link fencing along the open-air corridors work together to create an edgy feel, fitting the building’s industrial surroundings. Metal fins circling the facade provide a layer of articulation that creates shadow lines and adds depth to the exterior, helping to visually smooth its segmented construction. 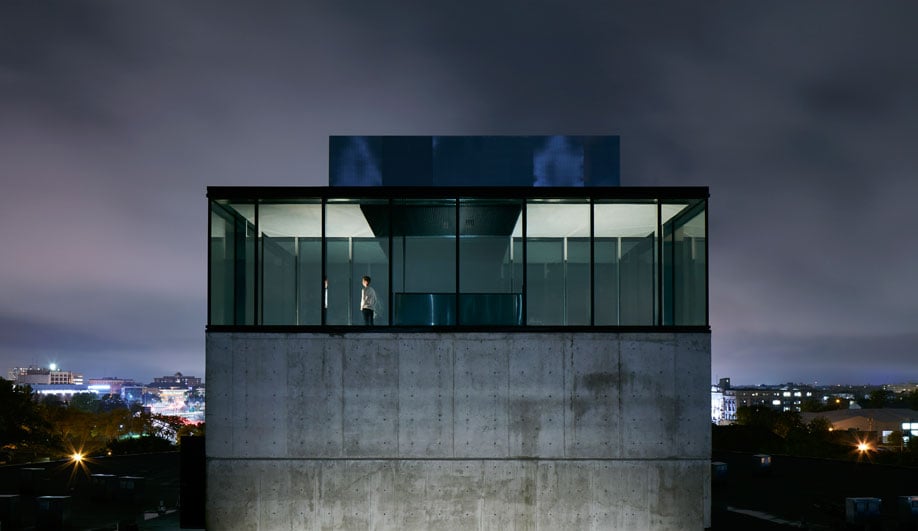 One final design move came just as construction of the building began. Realizing that the top of the central shaft offered an opportunity to create something special, the architects incorporated a two-level, glass-enclosed jewel box rising from the core. This single, luxurious suite – owned jointly by the architects and the developer – offers 360-degree views of the city and is let out for temporary stays, making it Winnipeg’s most unique Airbnb unit. 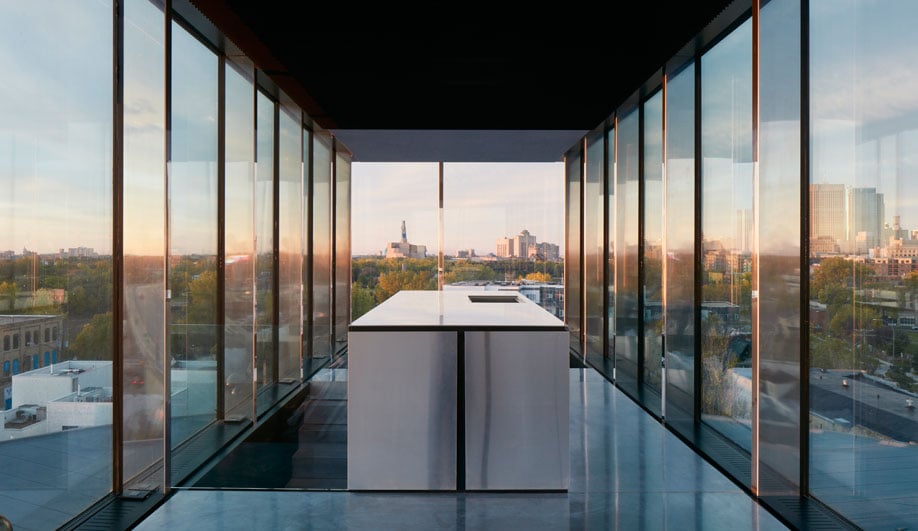 An inspired afterthought, the jewel-like unit atop the building’s core includes a glass-walled kitchen with panoramic views. The suite is rented out for short-term stays.

As its refined glass cap suggests, 62M is full of surprises, revealing itself in unexpected ways, from between neighbouring buildings and down narrow alleyways, to thousands of commuters as they speed along the freeway each day. Possibly the biggest surprise to the designers is that the most interesting views from the building aren’t toward the city’s skyline or the nearby Red River, but over the road, where the synchronized choreography of the moving vehicles can be an entrancing sight.

“That was something we all agreed on,” says Hurme, “but didn’t realize until we were able to stand there and experience it.”