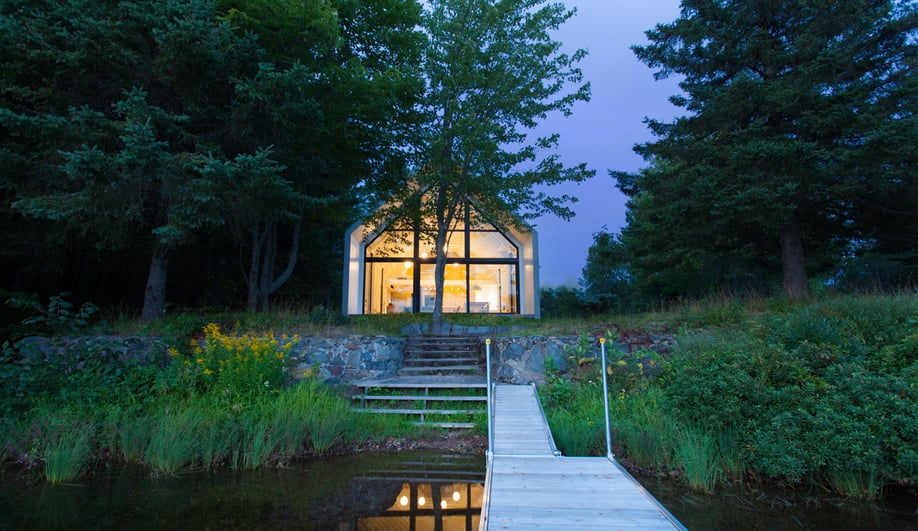 In Canada, cottages – or cabins, or summer homes, or chalets – are a way of life. The ritual of escaping into the (sometimes posh) wilderness is such a part of Canadian lore, in fact, that the Vancouver Art Gallery is hosting Cabin Fever, an exhibit exploring cottages, their architecture and their long-standing cultural impact. We expect it will be well-attended.

Yet the role cottages play in the Canadian psyche varies: the experience, as in Ontario’s Muskokas, can be well-heeled, only a short drive from artisanal tacos. On the coasts, cabins can be seaside retreats. In the mountains of Quebec and Alberta, chalets provide a gateway into year-round activities – expect them to be heavily trafficked in the wintertime, when ski season’s in full swing. Many have also become four-season homes – and real-estate investments for those priced out of cities.

Indeed, cabin fever impacts people across the country, but it’s hardly a singular experience. Here are five projects that highlight the diversity and beauty of the contemporary Canadian cottage. 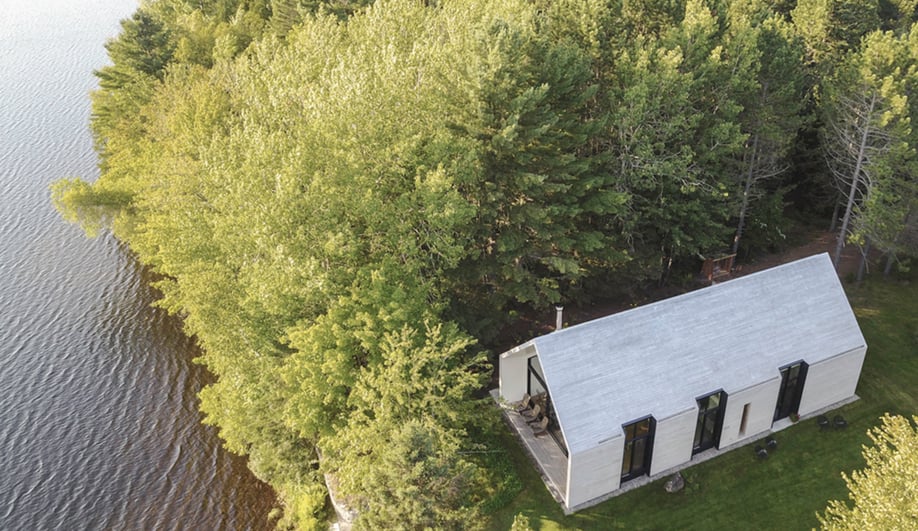 Window on the Lake (YH2 Architecture)

For Window on the Lake, in Quebec’s Mauricie region, YH2 wanted to distill a cottage to its very essence. Led by Loukas Yiacouvakis and Marie-Claude Hamelin, the Montreal architecture firm sought to spotlight the project’s site: a clearing shrouded by mature trees with an unbeatable view of Lac Plaisant. That view would become critical to the cottage design. 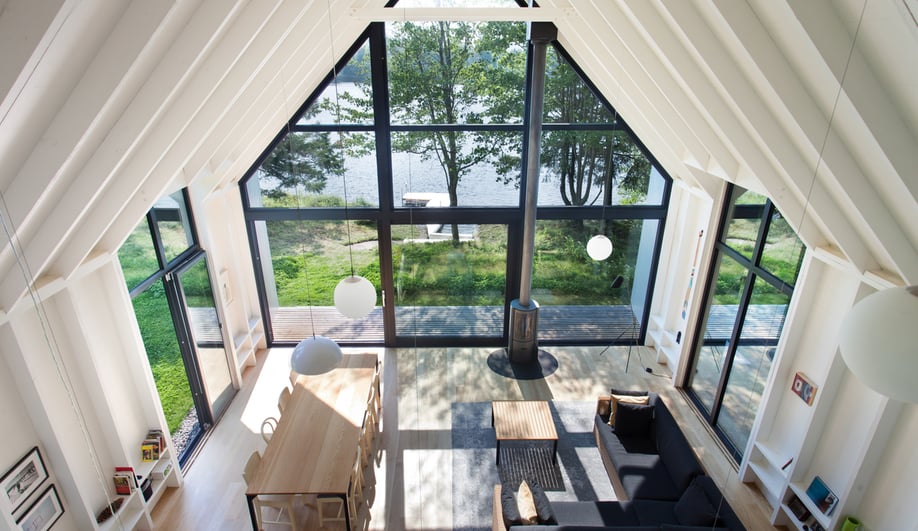 Like the cabins of yore, wood was essential to the construction of Window on the Lake. Mimicking the basic form of a pitched-roof house, the cottage is clad in unassuming white cedar boards. A balloon frame was used, and if you look closely, its studs are clearly visible. Glass strips provide eastern and western exposure, but from the interior perspective it’s the view south that dominates, thanks to an all-glass wall that brings the lake inside.

From a distance, the cottage appears to be a glassy volume hovering above the water. 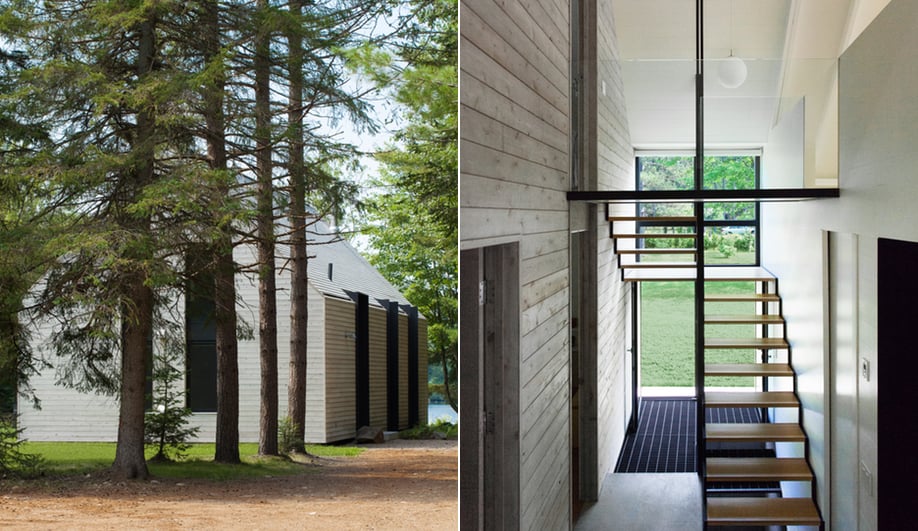 The rest of the house is wonderfully simple: its main floor has two bedrooms that adjoin to an open-concept living area, while it second storey accommodates 12 people in an open sleeping loft. It’s the successful articulation of YH2’s mission to present cottaging at its simplest: a window on the lake. 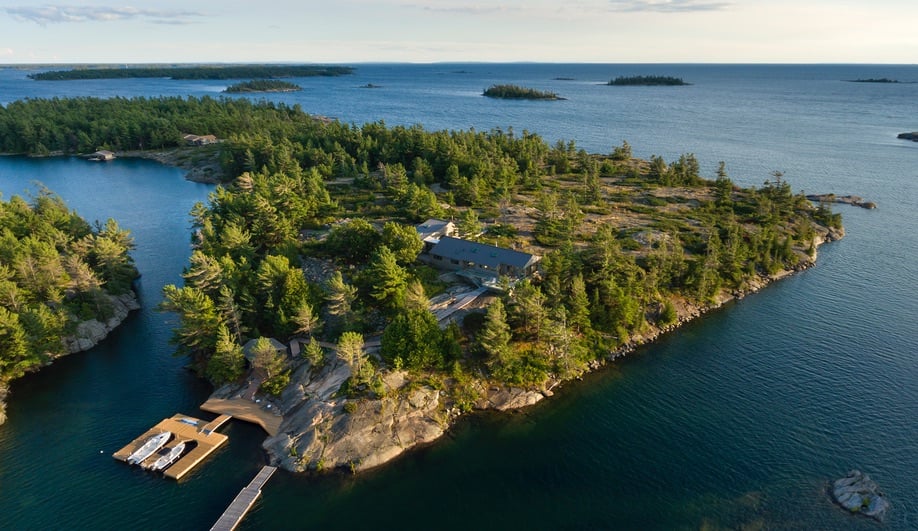 House on the Archipelago (Superkül)

Though House on the Archipelago boasts a dramatic site – it’s located on, yes, an archipelago, and is only accessible by boat – this Superkül renovation kept things deliberately modest. The Toronto architectural firm was tasked with updating a preexisting 1980s-era cottage, but instead of building a mega-house on a wide-open property, it elected to take inspiration from humbler sources. Namely, the Canadian Shield that surrounds the Georgian Bay dwelling. 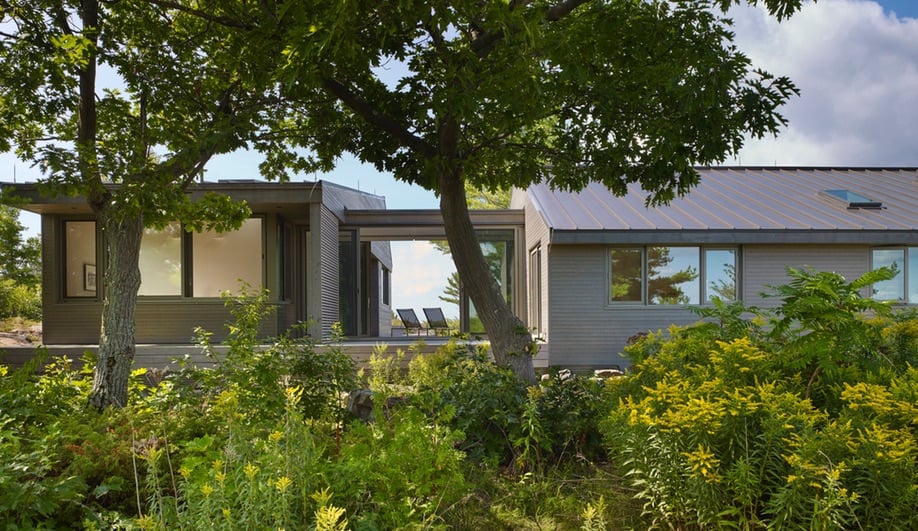 Superkül added an additional volume to the preexisting cottage, housing a master bedroom and office, and linked it with a glazed corridor that offers 360-degree views of Georgian Bay. Glass doors and patios were added to both sides of the breezeway, effectively blurring the lines between indoors and outdoors. Elsewhere, the firm reconfigured the site’s layout to add three bedrooms and a sun room. 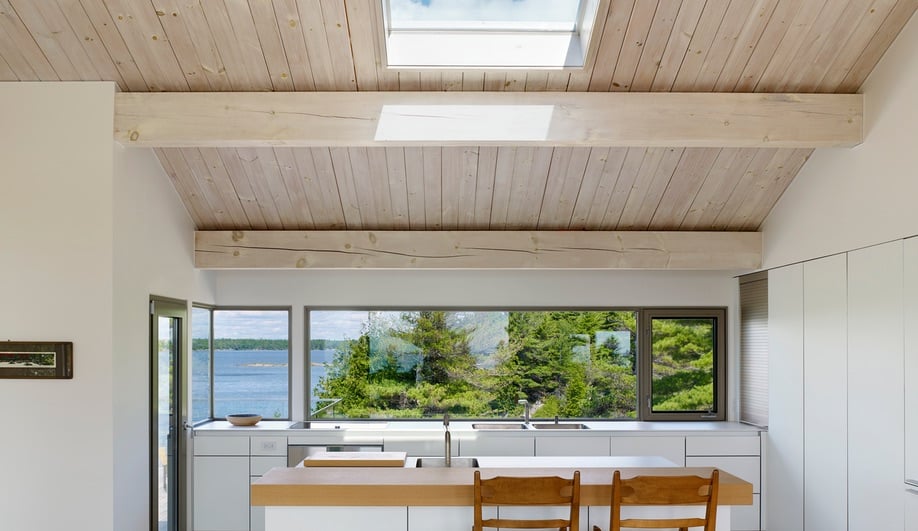 The cottage’s footprint increased dramatically – it now stands at 3,150 square feet – but the firm deliberately maintained the cottage’s low-lying form. Clad in grey-stained cedar to mirror the granite bedrock it sits upon, the home was designed to “organically emerge from the ground.” Inside, finishes nod to the home’s evergreen surroundings: white-stained fir planks connect both volumes, and clear cedar is used throughout. It’s hardly rustic, but it’s a clear nod to the language of the traditional Canadian cabin. 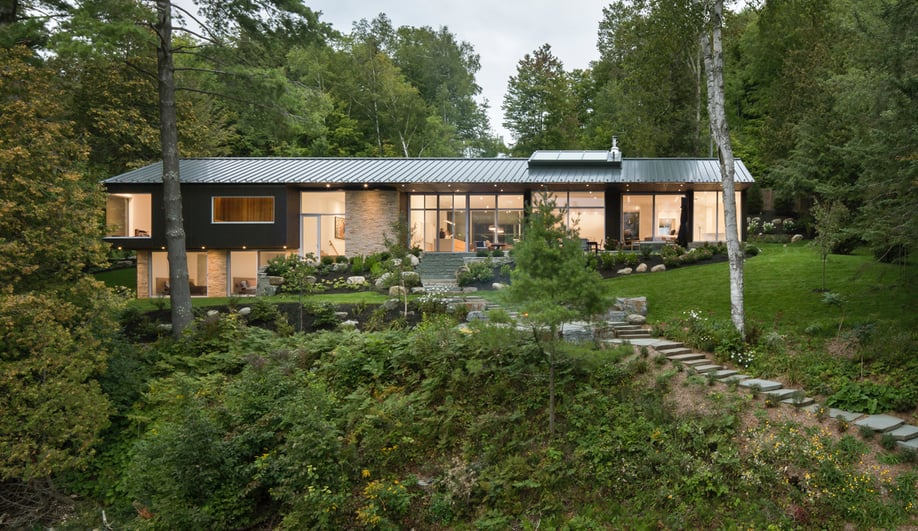 If Window on the Lake is a reinterpretation of the cottage’s traditional form, Slender House draws it inspiration from somewhere very different – namely, 1960s bungalows. Located in Quebec’s Eastern Townships, the residence by Montreal-based MU Architecture looms large: at 4,500 square feet, it is built on an incline with a 111-foot bladed roof that, the firm says, serves as a “fifth facade.” Due to the site’s steepness, retaining walls were installed onsite, and they double as hanging gardens. 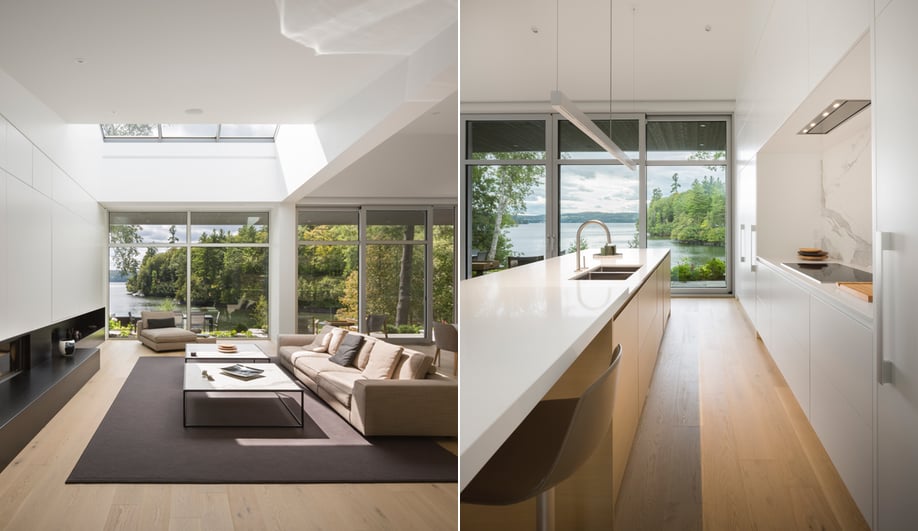 The sloping site provides this project with two key features: a commanding view of nearby Lake Memphremagog and soaring ceilings, which, in places, stretch to 25 feet. True to its name, the summer home is slender: its three suites are arranged in a linear row atop a garage, laundry room, pantry and service area. The living space (above left), lit by a dramatic skylight, provides sweeping views of skies, trees and water. The house also features a sauna, gym and a kitchen with custom built-in furniture (above right). 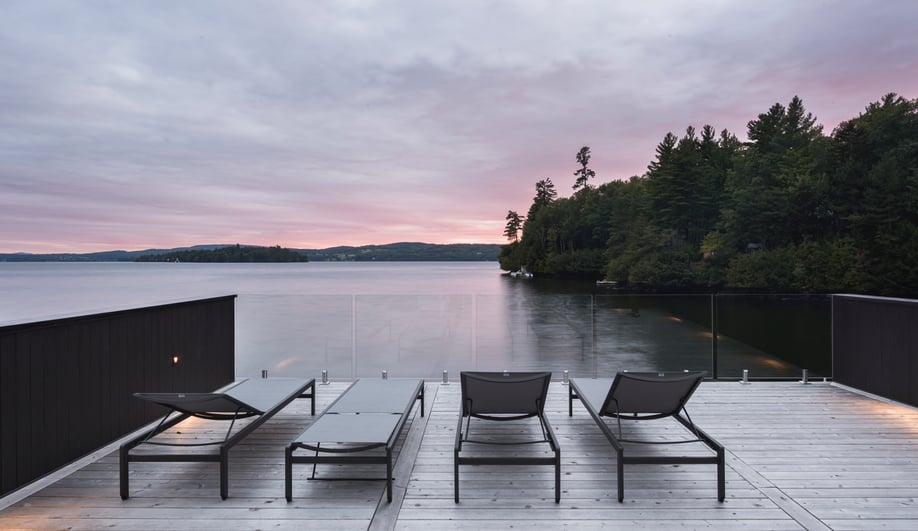 The property doesn’t end there: at the lake, MU Architecture also designed a bunkie-meets-boathouse, which features an additional kitchenette, a rooftop terrace and the ultimate amenity: a pristine sunset view of the lake. 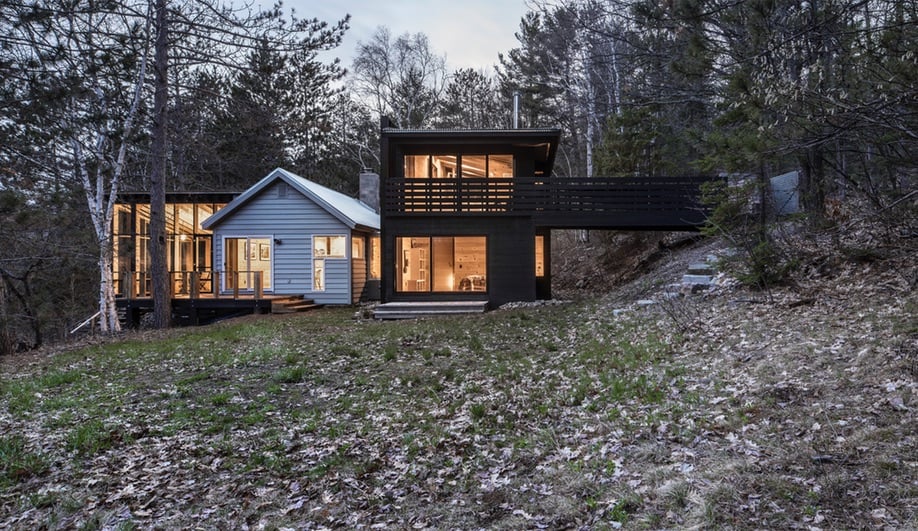 In Ontario, the Algonquin region is perennially popular for its four-season versatility: in the summer, its lakes and campsites beckon. In the wintertime, hiking and ski trails offer a respite from the city. So for Algonquin Waters, Toronto architecture firm Agathom Co. designed a cottage expansion that could accommodate a wide range of activities, while being inspired by an Algonquin pastime that resonates year round: a stroll through the woods. 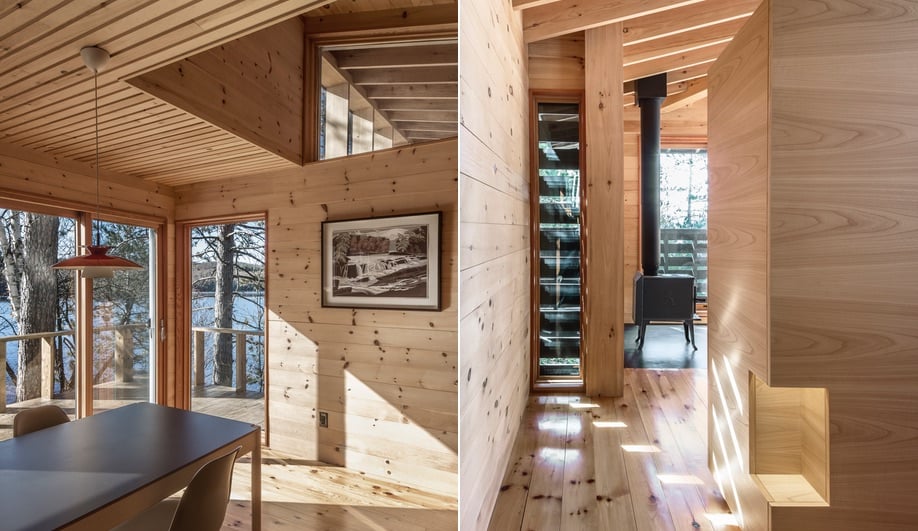 The result is wonderfully unexpected. Along with the original gabled-roof structure, the firm, led by co-founders Adam Thom and Katja Aga Sachse Thom, added a screened porch – facing the lake – and a new wing connected by a glass corridor, housing bedrooms, a study and bathrooms. As the cottage is built on a hillside, the second-storey master bedroom features a bridge that connects to the nearby forest. 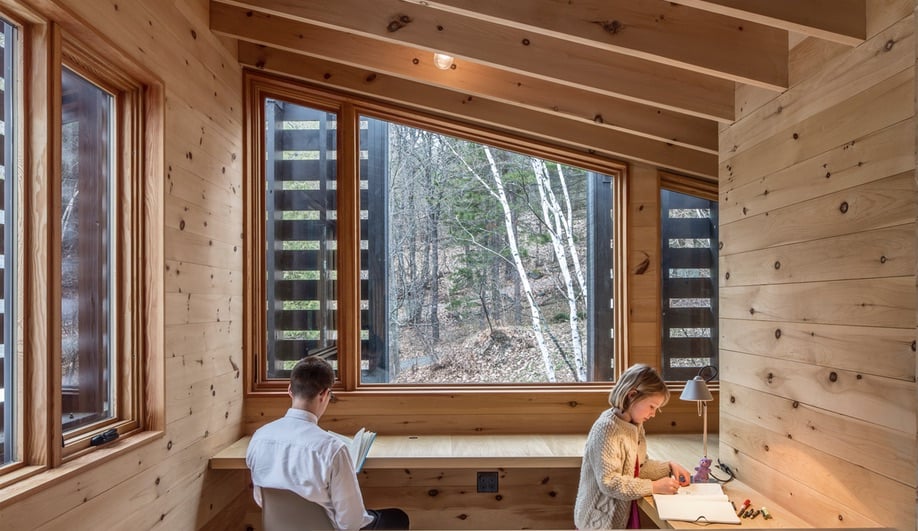 The journey through the house, the firm says, was conceived as “a set of dramatic sectional experiences.” As one moves from room to room, unexpected windows emerge, exposed-truss ceilings soar and and “canopies of structure” reveal themselves – an experience that brings the Algonquin forest indoors. 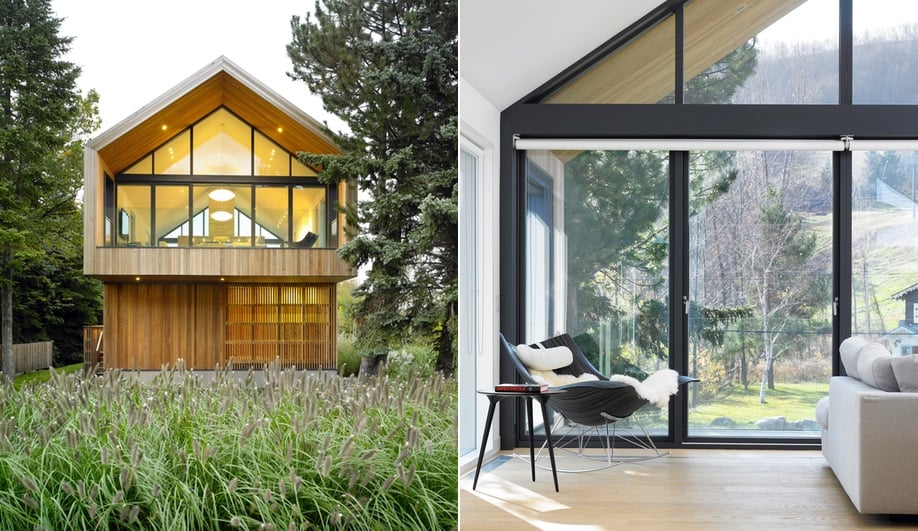 Earlier this year, Atelier Kastelic Buffey‘s Alta Chalet, a Collingwood, Ontario home that transformed a barn’s typology into a minimalist gem, was shortlisted for an OAA Award for Design Excellence. Their artful interpretation of time-honoured forms also extends to Maison Glissade, which inventively interprets the language of nearby chalets and agricultural buildings. 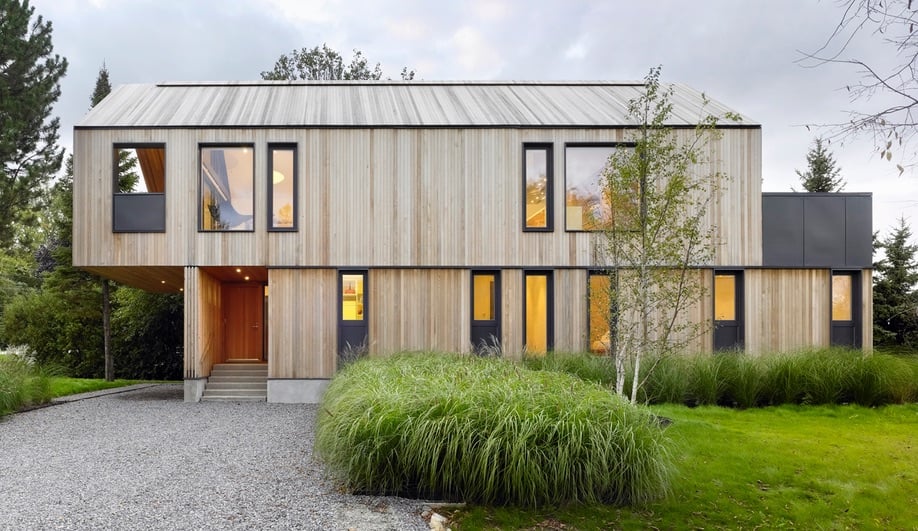 Located between the Niagara Escarpment and Georgian Bay in Southern Ontario, the house consists of two stacked volumes; the upper features a gabled roof, a nod to nearby residences. Inspired by a skiing technique called a glissade, AKB slid the upper volume forward, resulting in both a cantilever and a void. It allowed the firm to create two additional spaces – an additional second-storey balcony and a ground-level shaded terrace – without increasing the house’s overall footprint. 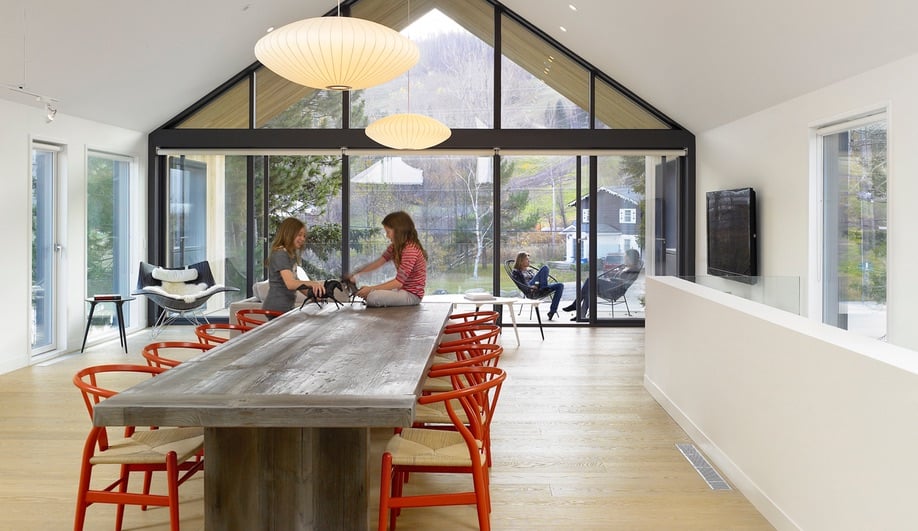 The firm developed an efficient ground-floor layout – big enough to house critical amenities for a family of five – that emphasized communal gathering in the upper volume. The second storey houses a kitchen, dining area and living room defined by towering glass walls. Along with providing stunning views (the southern view, above, points the eye towards a ski hill) these windows reduce the need for artificial lighting, while using the sun to passively heat the house. Sliding doors and tilt-turn windows allow for ventilation during the hotter months, too. 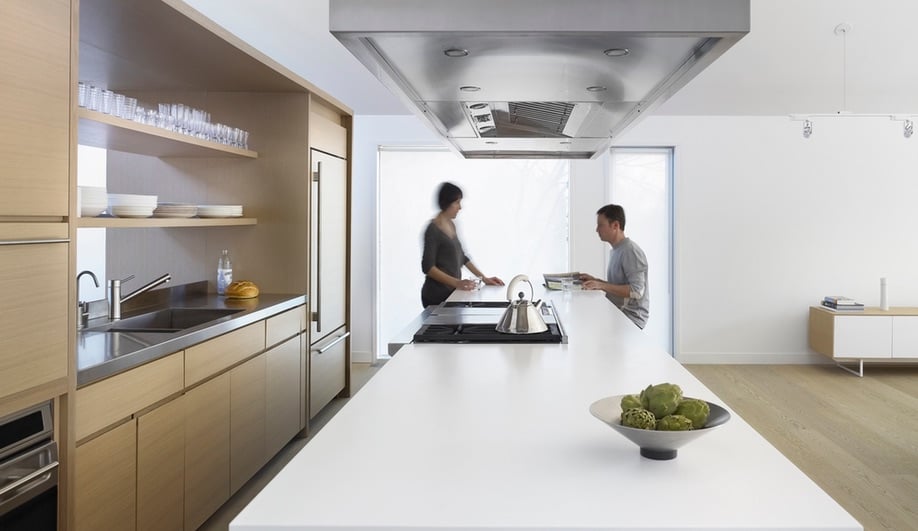 Unlike many other cottages, Maison Glissade isn’t perched on water – but with views like these, one could hardly complain.