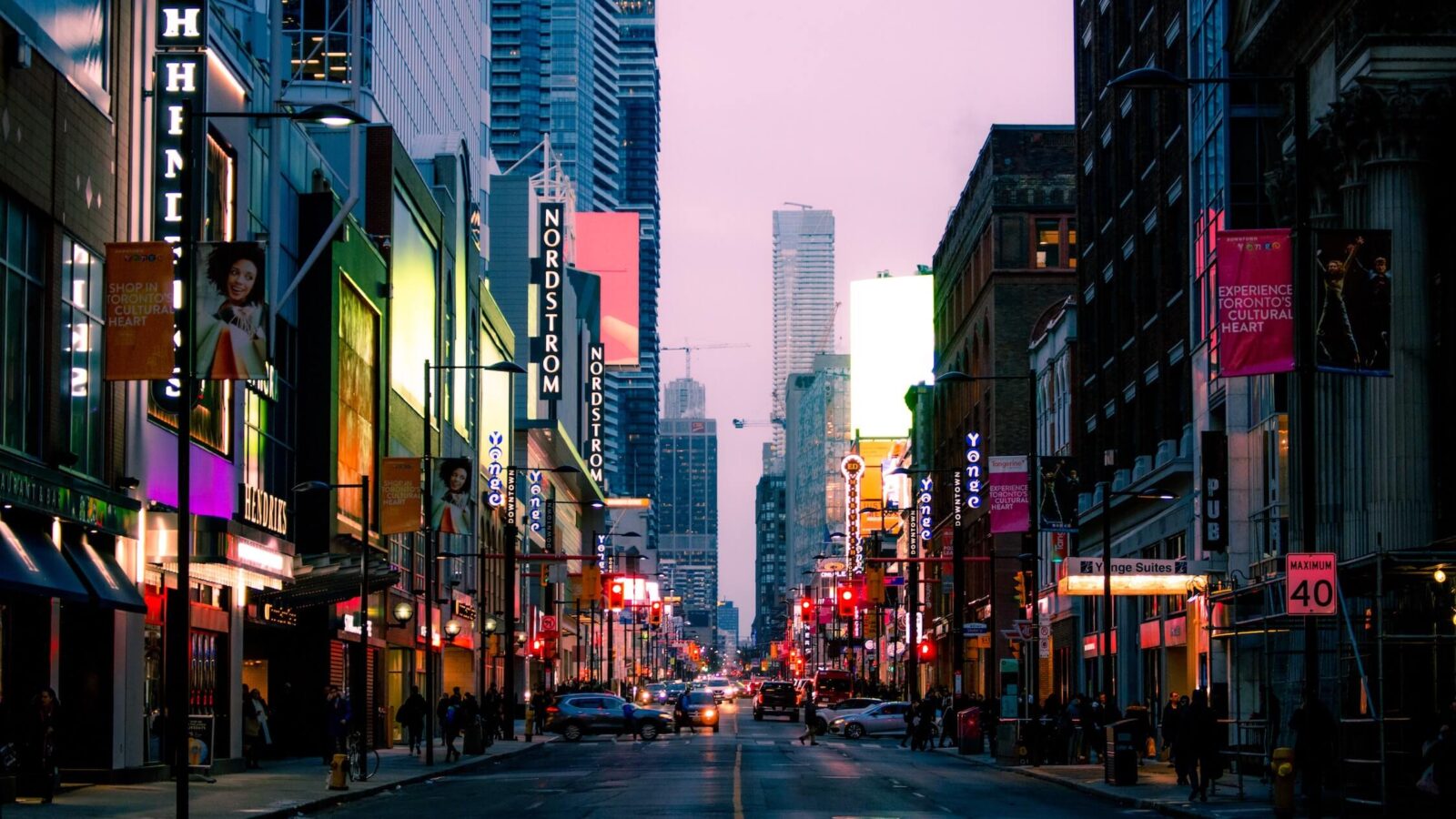 For pedestrians, Toronto is dangerous at the best of times. In 2019, 42 pedestrians were killed on the streets of Canada’s largest city. Hundreds more were injured, with an average of six people hit by a car each day of the year. 2020 is different. While COVID-19 means there are fewer cars on the roads, the pandemic poses an acute epidemiological peril – one that most sidewalks aren’t nearly wide enough to alleviate.

My own walk to the grocery store is a weekly brush with danger. From my Keele Street apartment to the nearest grocer at Bloor and Dundas West, the short trip unfolds in a pattern of zig-zags to keep at least two metres of space from other people. On Toronto’s narrow sidewalks, maintaining the social distance prescribed by public health authorities often leaves pedestrians no option but to repeatedly step out onto the road and into harm’s way. It’s an uncomfortable calculus: Risk the spread of contagion or the hood of a car?

Daniel Rotsztain has experienced the same problem. The Toronto resident and urban geographer built what he describes as a “social distancing machine” to demonstrate the difficulty of navigating the city on foot. Rigged up from plastic and pink rubber tubing, his contraption creates a two-metre ring around the wearer. In a playful yet arresting video, Rotzstain’s camera follows collaborator Bobby Gadda as he attempts to navigate downtown Toronto with a two-metre radius. The results are alarming.

Over the course of the minute-long video, Gadda is repeatedly left with no choice but to step out to the middle of the road. Even with Yonge Street (usually the city’s pedestrian spine) all but emptied of people, the narrow sidewalks force Gadda into traffic. And on a street full of everything from mailboxes, sidewalk advertising and telephone poles to garbage cans and construction hoarding, Rotsztain’s device illustrates the paucity of real pedestrian space.

The obverse of Rotsztain’s argument for more room to manoeuvre is expressed in an open letter by Toronto’s Medical Officer of Health, Dr. Eileen De Vila. She argues that the “closing of lanes to provide more space for pedestrians and cyclists could have the impact of inducing pedestrian and cyclist usage.” In other words, creating more space only invites more street life, exacerbating the risk of viral transmission. The city’s sidewalks tell another story.

If Rotsztain’s experiment, which attracted a wealth of local and international press, laid bare the everyday challenges of social distancing in the downtown core with eclectic humour, architect Julie Bogdanowicz’s impromptu chalk measurements of sidewalks document a mean residential public realm with elegant clarity. In order for two or more people to safely pass, someone has to step into the street. And though Dr. De Vila’s warning about increased walking and cycling merits consideration, the status quo endangers pedestrians at every turn. Induced demand or not, how can people be expected to keep two metres apart on 1.5-metre sidewalks?

I was having trouble visualizing 2m, so I drew it up outside my home. Our public realm wasn’t prepared for this either. Stay safe friends. pic.twitter.com/RctM5GlK47

Toronto’s inaction is a contrast to other cities around the world. From Mexico City, Milan, Oakland, Berlin and Budapest to Minneapolis, Austin and Auckland, widened sidewalks, new temporary bike lanes and pedestrianized roads have opened up vital space for physical distancing. While Canadian cities as a whole are lagging behind their international counterparts, Toronto’s response pales in comparison to Vancouver, Montreal and Winnipeg, where select streets have been wholly or partially shut to car traffic. In Ottawa, a pilot project has closed the Queen Elizabeth Driveway to daily vehicle traffic between 8 a.m. and 8 p.m.

But we needn’t turn our gaze even that far afield. Some of the Greater Toronto Area’s other municipalities have taken more proactive measures. In an effort to create “safe active transportation opportunities,” the City of Brampton has temporarily closed two curb lanes to vehicle traffic, creating interim bike lanes along the Vodden Street corridor. Compared to Toronto’s passivity, even these decidedly modest measures seem bold.

UPDATE: On Monday, April 27 the City of Toronto announced that widened sidewalks will be implemented in select locations by temporarily blocking off sections of curb lanes.

But if the city has failed to act, it hasn’t been for lack of advocacy. From urbanist Twitter to legacy media, Toronto’s municipal government has resisted a chorus of calls to open streets and roll back closures of parks and playgrounds. Led by local councillor Kristyn Wong-Tam, the unsuccessful campaign to open part of downtown Yonge Street has been covered by the CBC, Toronto Star, National Post and Globe and Mail. The broader disenchantment with lack of pedestrian space has also garnered substantial media coverage, with a recent Globe and Mail editorial outlining “an immediate need to open up space in densely populated areas of Canada’s cities,” citing downtown Yonge Street as “an obvious starting point.”

While Toronto’s city council has rightly been criticized for failing to take more proactive measures, the focused push for downtown walkability has itself fostered a narrow urban discourse. As placemaker and author Jay Pitter points out in her recent Azure essay, “mainstream urbanists are loudly advocating to widen sidewalks and public parks,” all while “individuals living in forgotten densities are pleading to have their urgent concerns heard.”

From public housing communities and seniors’ residences to favelas and mobile home parks, Pitter’s forgotten densities describe the people and places left out of mainstream narratives of urban life. A pedestrianized Yonge Street would be a welcome amenity for downtown condo-dwellers, but it doesn’t mean much for those living in Toronto’s geographic and socio-economic margins.

Speaking to the Canadian Press, Edmonton-based urban neuroscientist Robin Mazumder points out that life during the COVID-19 pandemic “varies with class and income.” While lower-income people are less likely to have “a house with a big backyard,” Mazumder notes that the temporary street closures adopted on Edmonton’s Victoria Park Drive and Saskatchewan Road will mostly serve wealthy residents who already benefit from private green space and easy access to deliveries and essential services.

For Toronto – and cities across North America – Edmonton’s experience offers a cautionary tale. Even if Yonge Street (and other downtown corridors) are closed to traffic, these necessary measures may exacerbate the already unequal impacts of COVID-19 across racial and class divides. With the pandemic only poised to widen existing inequalities, a progressive urban response must work to correct these disparities.

For starters, the push to pedestrianize streets needs to include dense urban communities outside the downtown core. Toronto’s uniquely high concentration of suburban high-rise apartments – mostly built according to a Corbusian model of isolated towers – means that many of our least pedestrian-friendly neighbourhoods are also among the most dense. Downtown Yonge Street should be pedestrianized, but – perhaps more importantly – so too should stretches of North York and Scarborough. 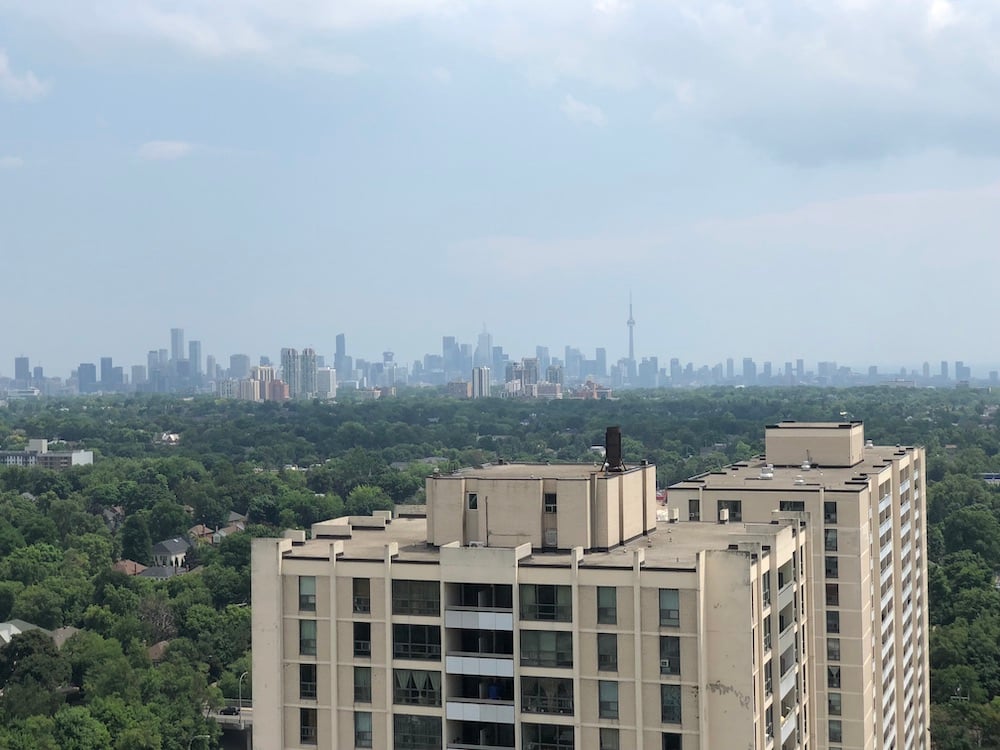 Pitter’s incisive essay also points to the obvious deficiencies that afflicted Toronto’s public housing stock long before COVID-19. From foyers “too small for social distancing” to a building where “two of the three elevators are chronically out-of-service, and the sole operating lift is often sullied with urine and feces,” scores of Torontonians face much more acute dangers than crowded sidewalks. In April 2019 alone, dysfunctional elevators in Toronto Community Housing (TCH) buildings meant that a 15-year-old student was unable to attend school because his wheelchair could not fit into the building’s sole operating lift, and a 45-year-old man suffered injuries after falling down an open elevator shaft in his downtown apartment building.

As a more pedestrian-friendly Yonge Street continues to be debated, immediate funding for elevator repair and building maintenance is needed for the city’s chronically underfunded social housing communities. More regular cleaning for hallways, lobbies and balconies – many of which have become unusable due to pigeon infestations – is also an urgent but uncomplicated priority, with the pandemic only intensifying the need to address the broader problems of TCH’s ageing housing stock and $1.6 billion repair backlog.

The built environment is only part of the equation. Toronto’s reticence to open sidewalks and parks has been paired with a culture of punitive surveillance. Playgrounds and park amenities have been cordoned off with yellow tape, and a “social distancing blitz” saw police and bylaw officers issue almost 500 tickets of $750 each between April 3 and 20. With access to big backyards and private green space divided across racial and class lines, the structure of the blitz – and the associated social shaming of park users – risks regressively punishing those who need public amenities most. And given Toronto’s long history of racialized and discriminatory policing, the only difference between illegal “lingering” and legal “resting purposes” may be an officer’s judgement.

On April 22, Deputy Mayor Ana Bailão announced that fines for merely sitting on benches will no longer be issued – though penalties for using park amenities and gathering in groups remain in effect. To make matters worse, the City of Toronto’s dedicated “snitch line” is another example of surveillance tied to enforcement. While the online non-compliance form allows for the collection of important complaints – such as price-gouging and unsafe business practices – the invitation to report “large gatherings” and “use of parks amenities” is fraught with potential for abuse. 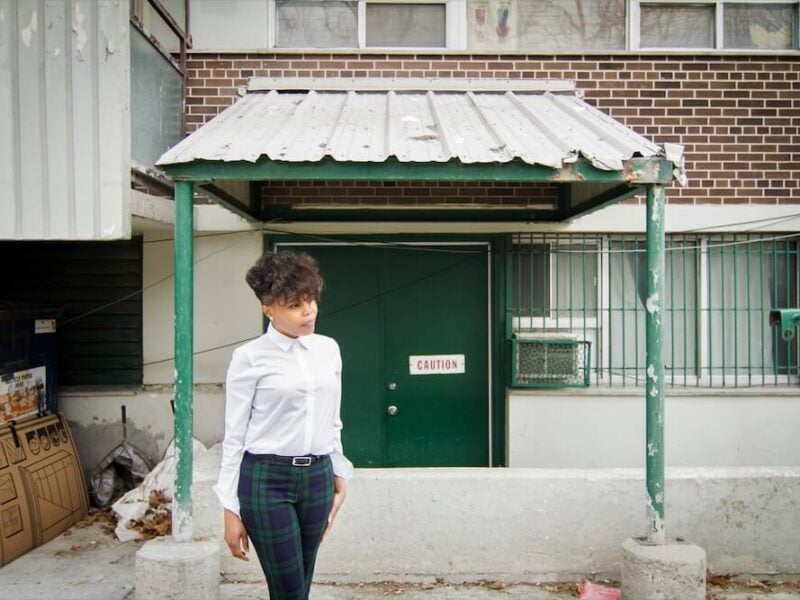 Urban Density: Confronting the Distance Between Desire and Disparity
Placemaker and author Jay Pitter argues for an equity-based understanding of urban density during the COVID-19 crisis and beyond.
Read More

According to data gathered in American states and cities, racialized communities have disproportionately faced impacts of COVID-19. (In Michigan, for example, Black people account for some 40 per cent of COVID-19 deaths, despite making up 14 per cent of the overall population.) By contrast, the City of Toronto only announced a program to start collecting race-based COVID-19 data as of April 21, while the Province of Ontario continues to argue that such measures are wholly unnecessary. It’s a startling position, especially considering a Toronto Star report that “organizations serving Canada’s urban Indigenous population are sounding alarm bells about the growing needs of this vulnerable group,” while criticizing a “sluggish and inadequate” response from the government. In a pandemic, Toronto’s chronic failure to tackle homelessness is also proving deadlier than ever.

Amid all of this, urbanist discourse – and media coverage – during the pandemic has remained too fixated on widening downtown sidewalks and opening parks. As an urbanist and a journalist, I have been as guilty as anyone: After reading Pitter’s essay, I was struck by how people living in forgotten densities were overlooked in my own analysis of COVID-19 and urban density. This has to change. During the pandemic and beyond, every call to expand pedestrian infrastructure and parks must be matched by an equally strong push for urbanism at the margins – and creating space for forgotten communities as city builders.

Racial and class disparities are deeply enmeshed into the geographic and cultural fabric of North American society, and the COVID-19 crisis is making the differences more keenly felt. These injustices are rooted in much more than urbanism, and the process of untangling them will require near-revolutionary social changes – continuing decades after the pandemic. For now, at least, it’ll help if the elevators are running.