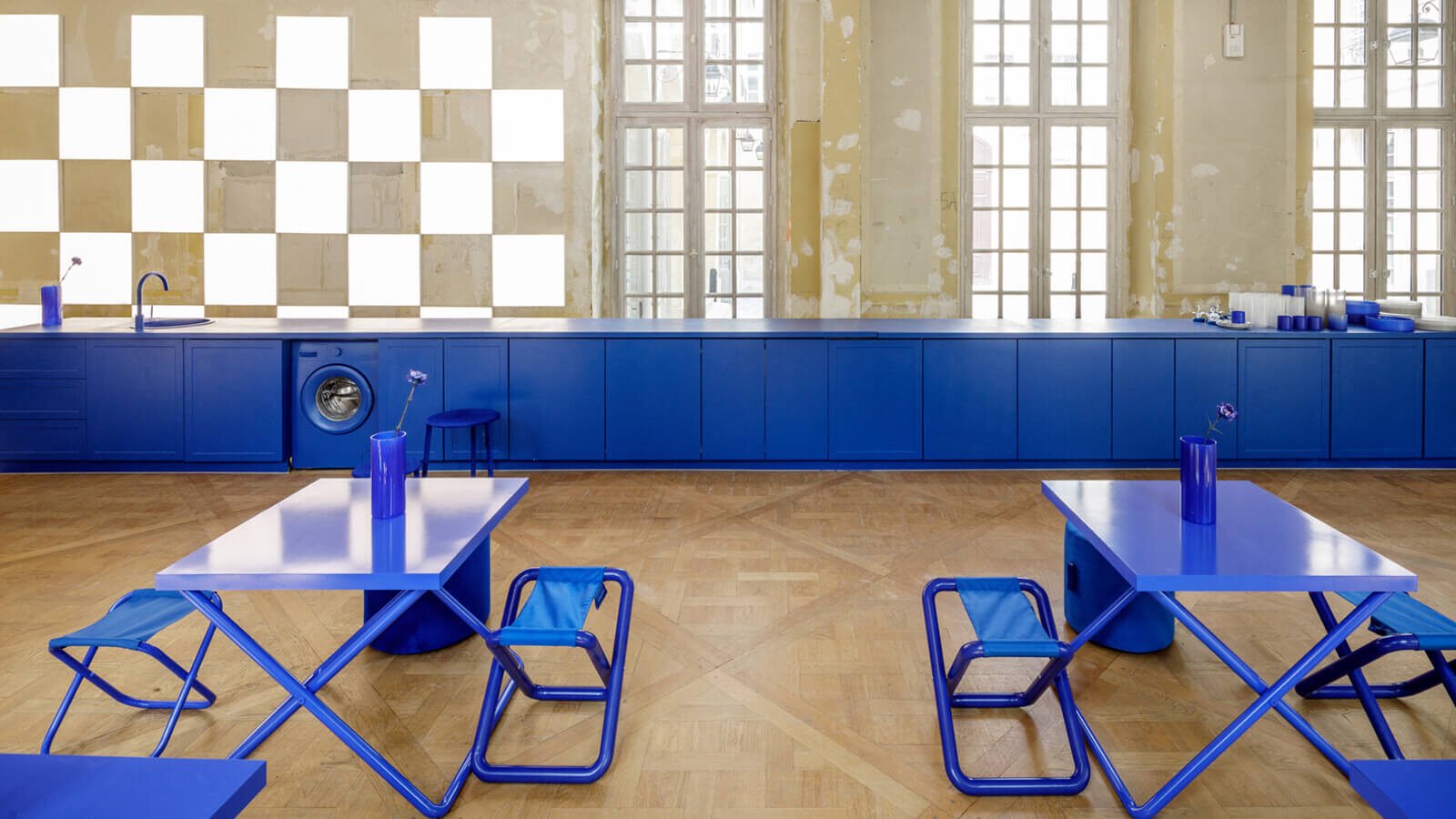 In 2014, Paris’ mayor Anne Hidalgo issued a call to architects and designers from across the world to reimagine the future of the city. Two years later, 23 submissions from the likes of Sou Fujimoto, David Chipperfield and more were chosen as experimental beacons for the metropolis’s next stage of development. Among those selected was 3537: a community initiative and outgrowth of Avant-Garde retailer Dover Street Market that programs exhibitions, concerts, events and more in and around its headquarters in the Hôtel de Coulanges. Now, the 17th-century mansion has a bold new addition: The Crosby Cafe. 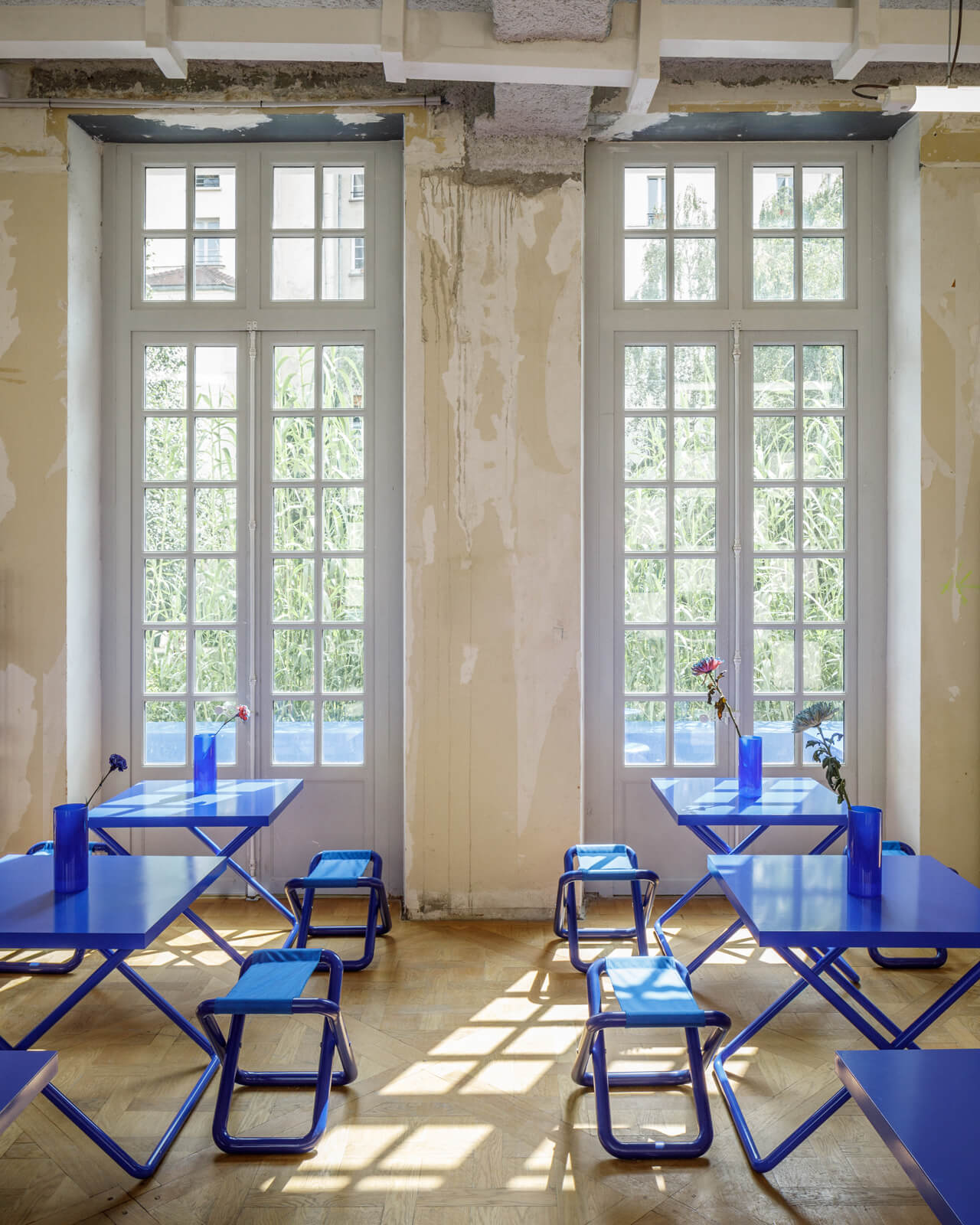 Conceived by New York- and Moscow-based artist and architect Harry Nuriev of Crosby Studios, the space doubles as both a hospitality venue and showroom for the designer’s latest furniture collection. “Crosby Café stems from 3537’s mission as a platform for community exchange,” says Nuriev, “a vision I share in my mixed-use concept spaces I create. Crosby Café is a place to enter an alternate reality within a traditional Parisian mansion where you can get inspired, enjoy a coffee or hang out.” 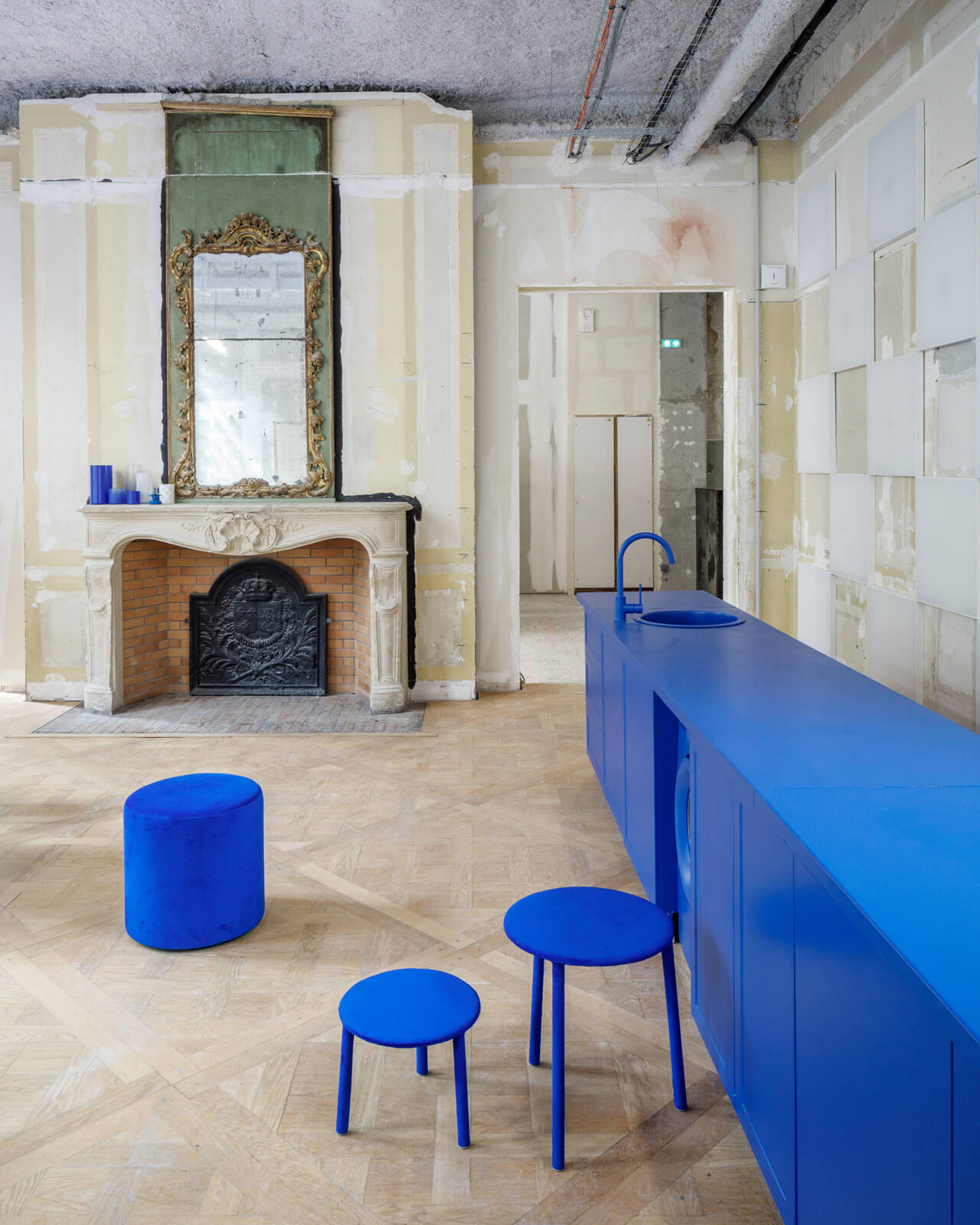 To that end, the designer deliberately kept the base-building as is, appearing almost mid-construction with exposed ceilings and walls. Animating the interior, instead, are a suite of cobalt-blue millwork elements and furnishings that create a dramatic contrast against the historic foil. A long monochromatic island occupies the structure’s main space (formerly a palatial foyer) and is flanked by a series of matching folding tables and chairs as well as rearrangeable stools and poufs from Nuriev’s new home collection. 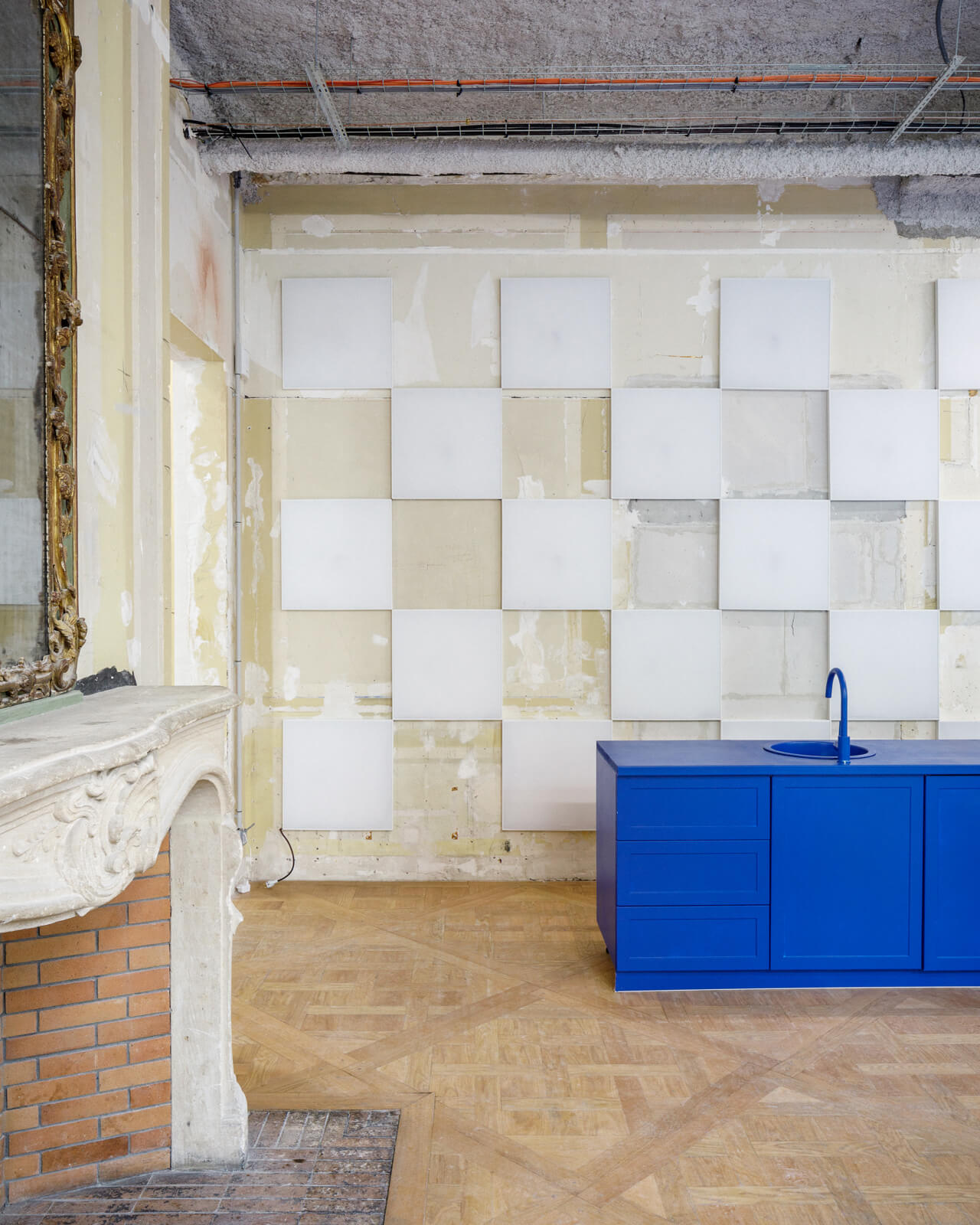 Behind the counter, which includes ample storage and even a laundry unit, a series of illuminated squares form a checkerboard pattern against the exposed drywall in a nod to the designer’s collection further within. (The treatment also recalls the Versaille scheme of the blonde wood floors.) 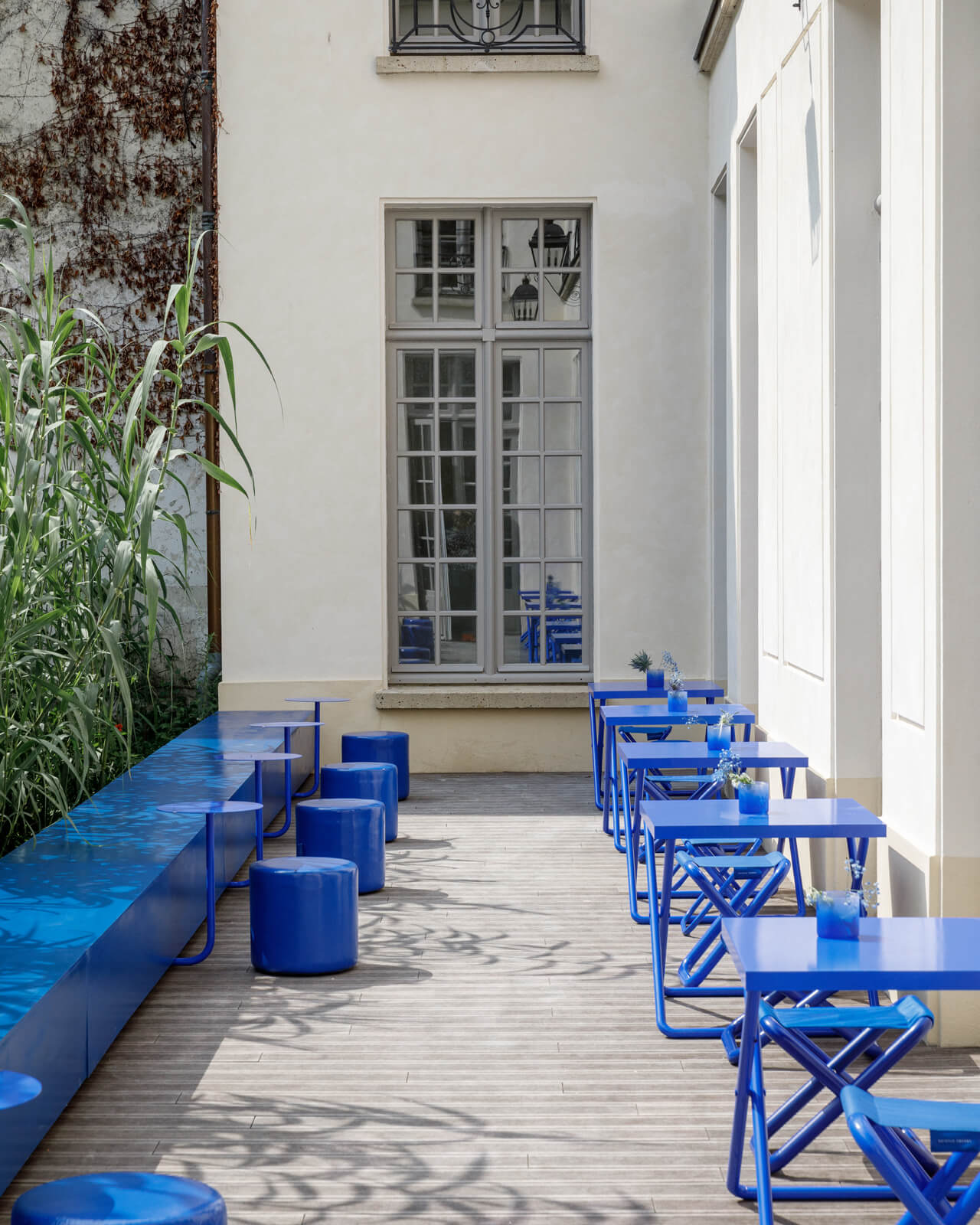 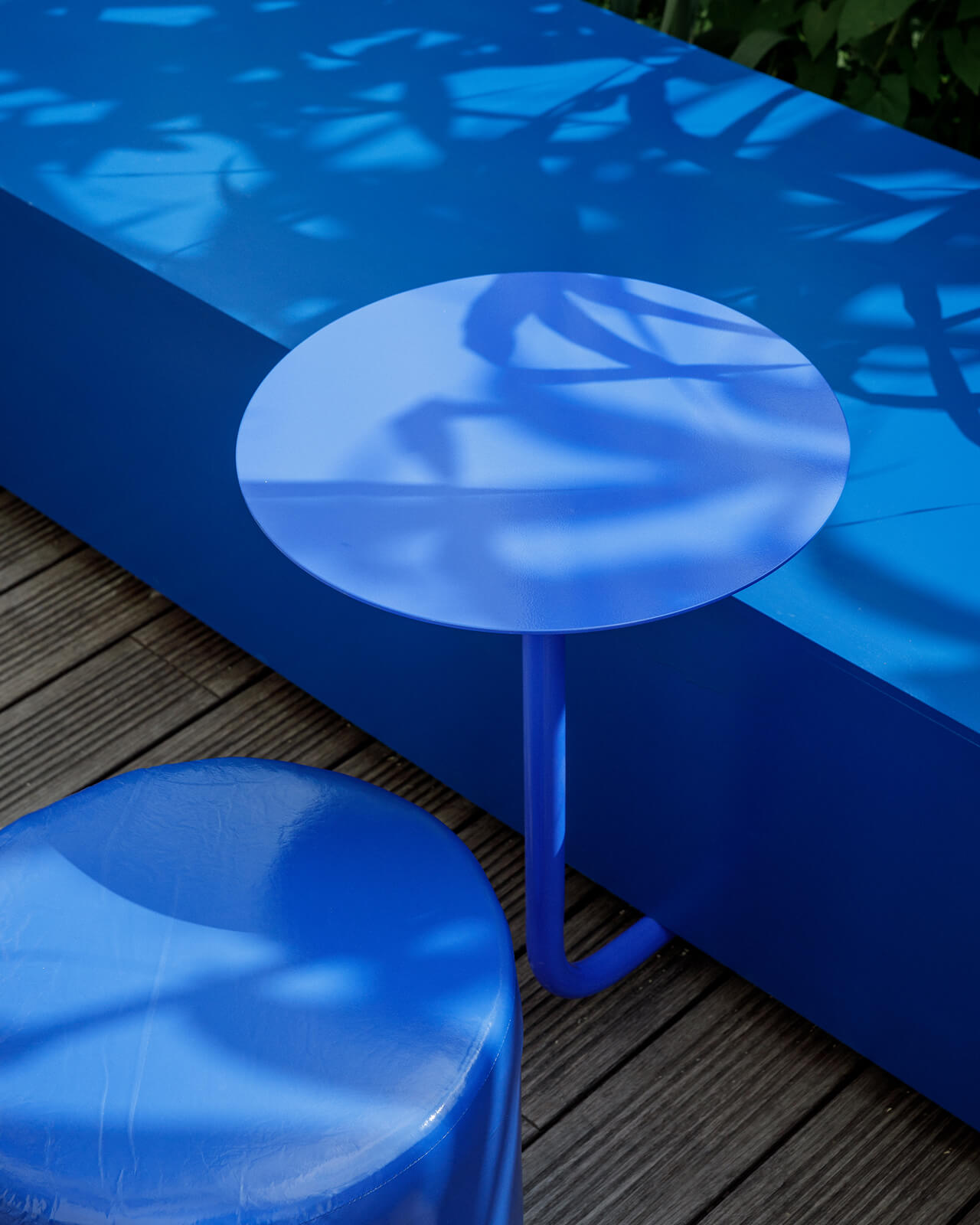 For additional seating, the floor-to-ceiling windows open onto a narrow veranda populated with identical stools and tables as well as a low-slung bench with small circular ledges. It offers generous views into the Jardin des Rosiers Joseph Migneret while sipping on a coffee from Ten Belles or a bite from Rose Bakery — two local enterprises providing the cafe with its food and beverages. 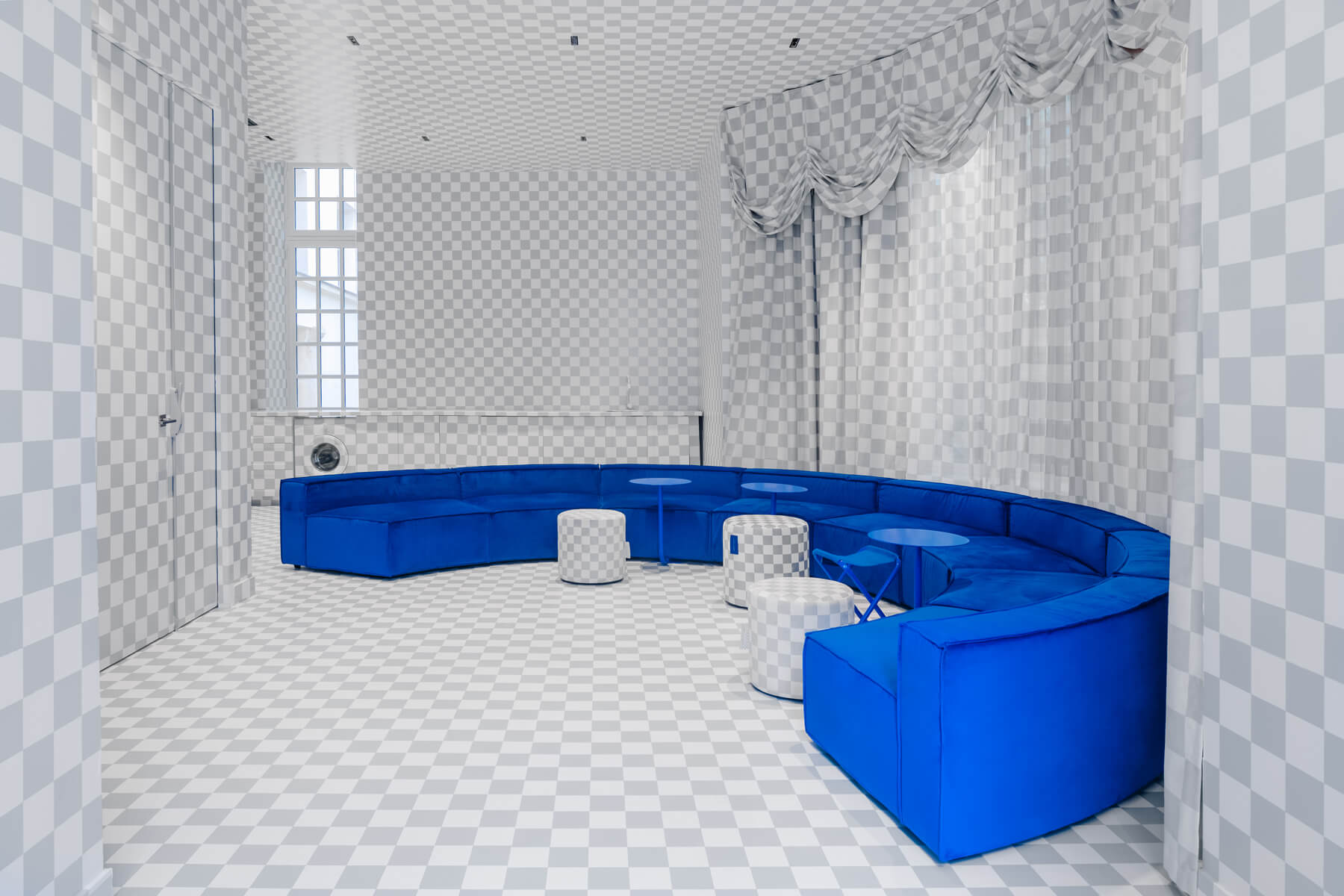 Deeper inside, the complex also plays host to an immersive hangout lounge-cum-showcase of the firm’s recently launched lifestyle brand: Crosby Studios Home. Lined entirely in a surface treatment referencing the photoshop transparency grid (curtains included), the room is anchored by an electric blue modular sofa in the same shade seen elsewhere. Together, the installation deliberately blends physical with digital, creating a sensation akin to moving through a virtual environment in the material world. 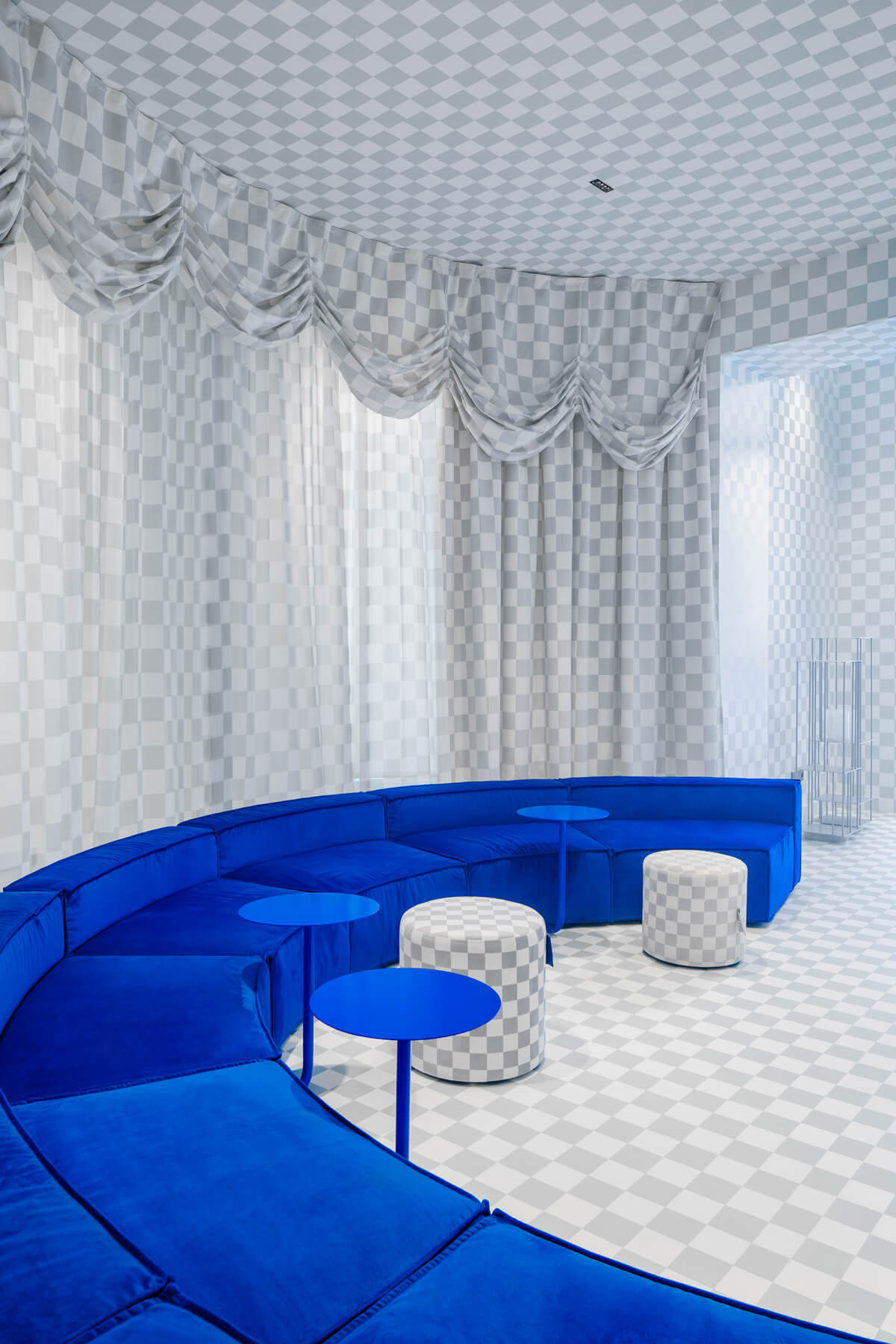 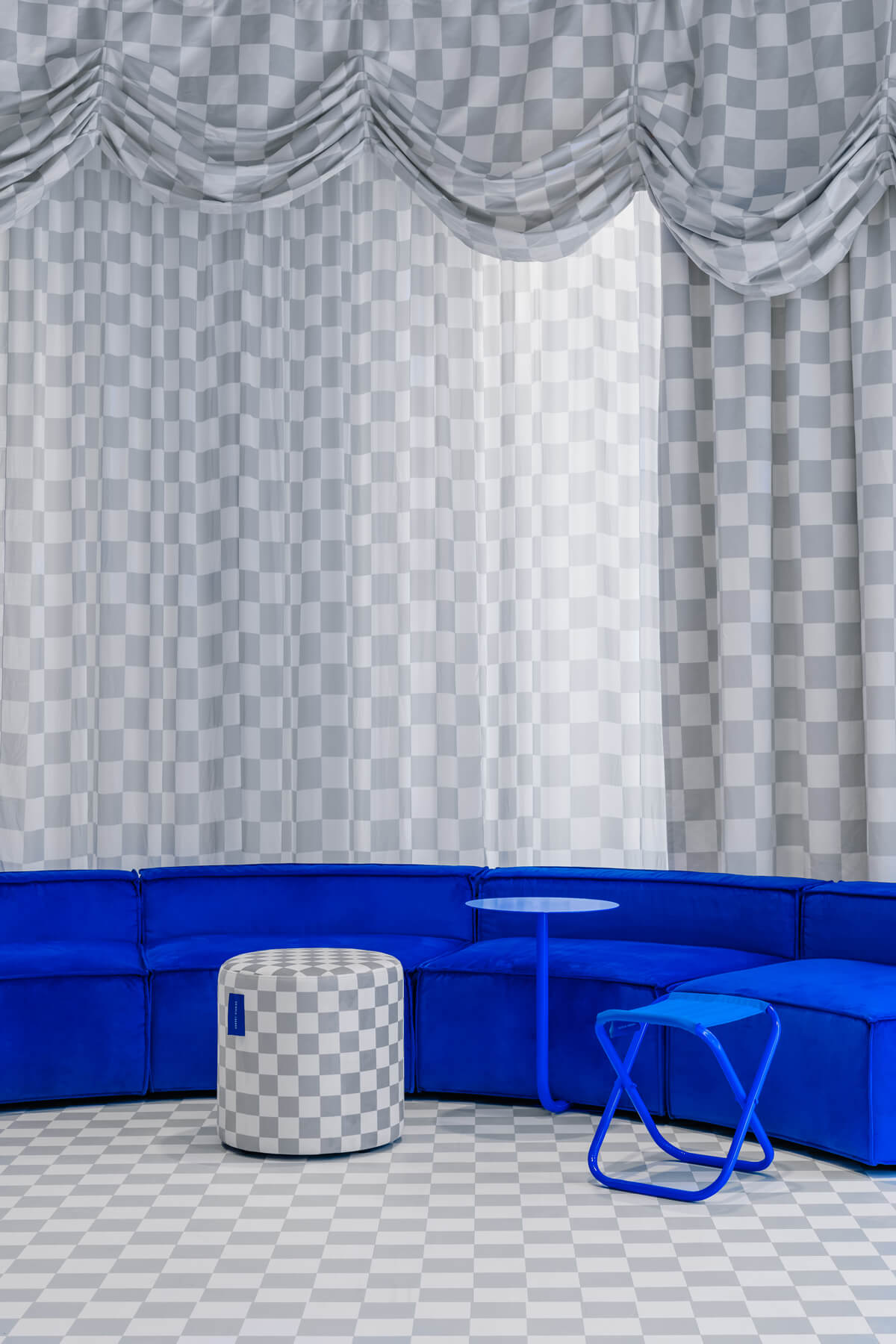 “The first time I entered Dover Street Market years ago, I experienced a new, unorthodox way of shopping that infused fashion with art,” says the designer. “Paris is my power spot where I feel free, and I always knew I wanted to collaborate with Dover Street Market on something special.” With the launch of Crosby Cafe, Nuriev has added to this lineage, providing a one-of-a-kind hospitality concept that blends physical and digital space for an entirely singular experience.