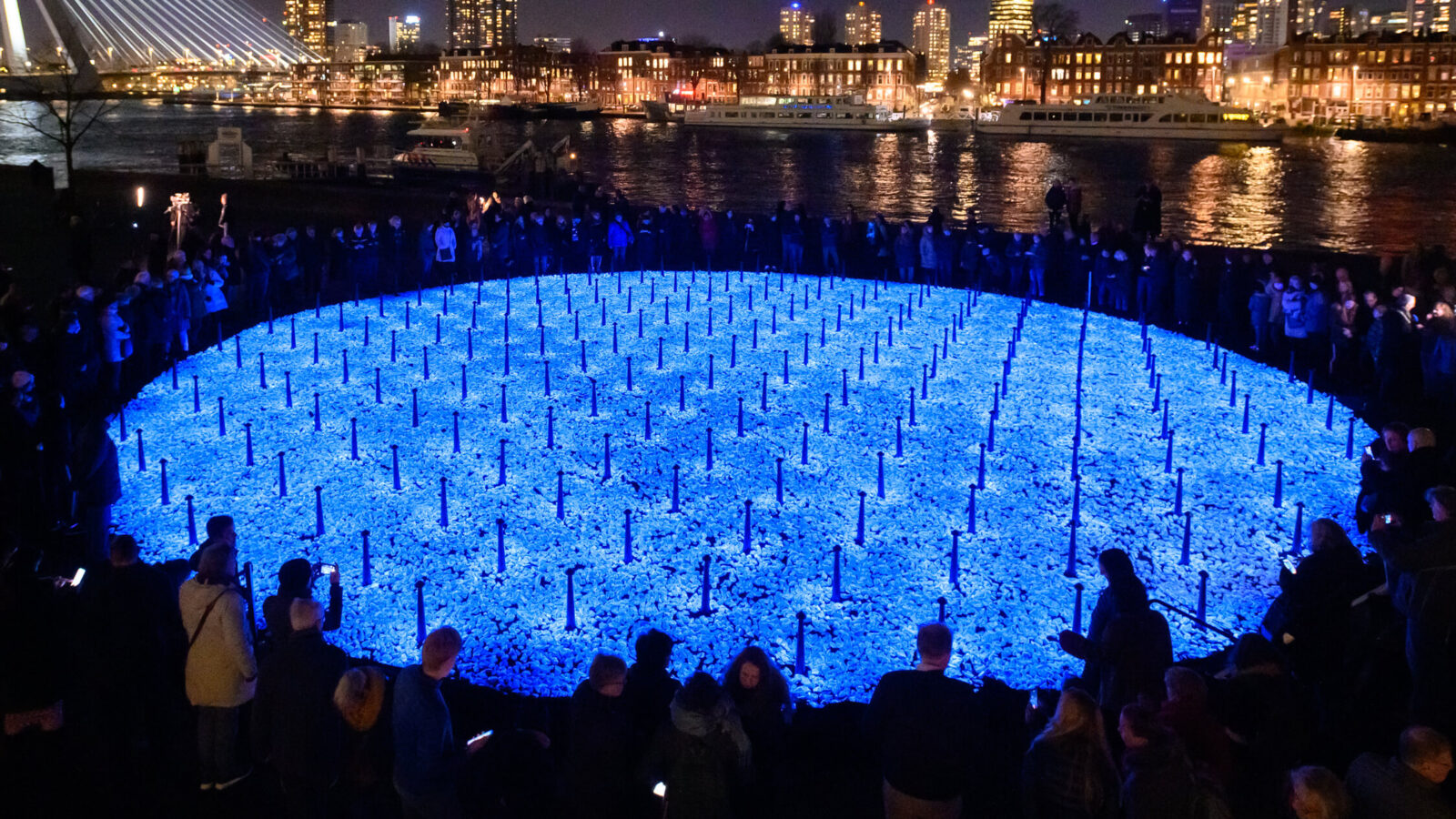 The artist has assembled 104,000 phosphorescent stones to shed light on the lives lost during the Second World War.

The fallout from the British election. Increased tensions in European countries. A violent attack in front of a synagogue in Halle, Germany, that claimed two lives. Far-right extremists in America and beyond. On the eve of the 75th anniversary of the liberation of the Auschwitz-Birkenau extermination camp, a tide of antisemitism is palpable across the world – but so is the resistance. Marking the January 27 milestone, artist/designer Daan Roosegaarde of Studio Roosegaarde has installed a temporary Holocaust monument in Rotterdam to commemorate and shed light on the Netherlandish people who were “persecuted, deported and murdered during the Second World War.”

Titled Levenslicht, the monument is composed of 104,000 memorial stones – each representing a Dutch victim of the Holocaust – arranged in a circular formation on the banks of the Maas River where local Jews, Roma and Sinti were collected and deported in the late 1940s.

In Jewish cemeteries across the world, stones, rocks and pebbles populate gravesites to represent the permanence of memory, while in Roma tradition, stones bear talismanic characteristics and are even considered an extension of their owners. These highly symbolic properties informed Roosegaarde’s resulting monument, with each stone coated in fluorescent pigment that glows under the invisible ultraviolet light emanating from a series of conical fixtures dispersed throughout the installation. Together, the stones cast a vibrant, phosphorescent blue hue that waxes and wanes “like a breath in light,” according to the studio.

“Levenslicht is a place for everyone where we remember the past,” explains Roosegaarde, “but also think about what the future may look like.” Following its inaugural installation in Rotterdam on January 16, portions of the monument will travel to some 170 communities throughout the Netherlands between January 22 and February 2 to disperse the collective memory of those lost across the nation.

Studio Rooosegaarde’s work builds on similar anti-monuments – including Peter Eisenman’s vast 2005 Holocaust Memorial in Berlin – that capture the immense weight of such losses through symbolic abstraction. It is also is part of continued efforts (such as the current renovation and extension to Germany’s oldest independent Jewish museum in Frankfurt) to preserve a record of history in the face of racist and nationalist sentiments.

Remembering is a complicated and difficult task – one that requires active engagement – and Roosegaarde’s fleeting monument asks visitors to participate in this work, literally cradling loss in their palms. “A memory must be held in order to keep it from moving or fading,” argues media theorist Wendy Chun. But perhaps, in the case of Levinslicht, such memories might also be illuminated to prevent them from dimming. Perhaps they may even light the way forward.

The artist has assembled 104,000 phosphorescent stones to shed light on the lives lost during the Second World War.