A Glass House Under the Big Blue Sky
The client asked for a New York loft transposed onto a California landscape. Deegan Day Design delivered a home that blurs the line between dwelling and landscape. 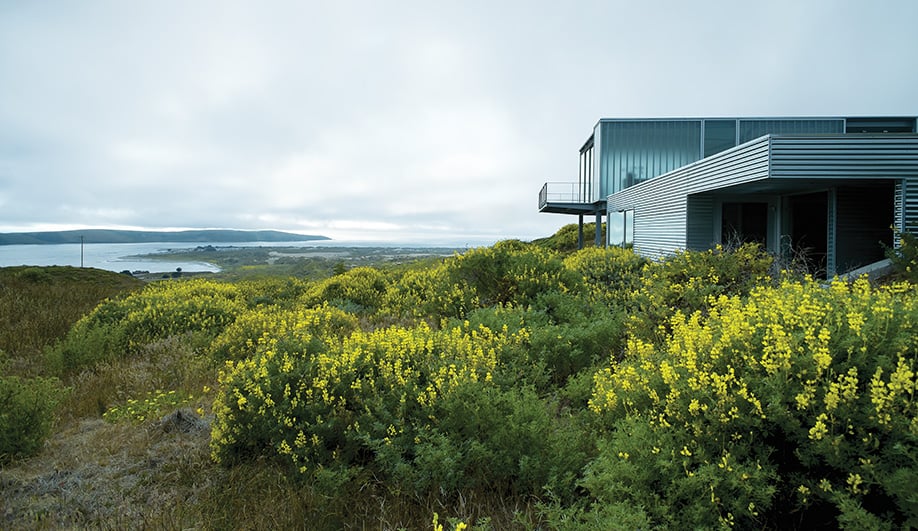 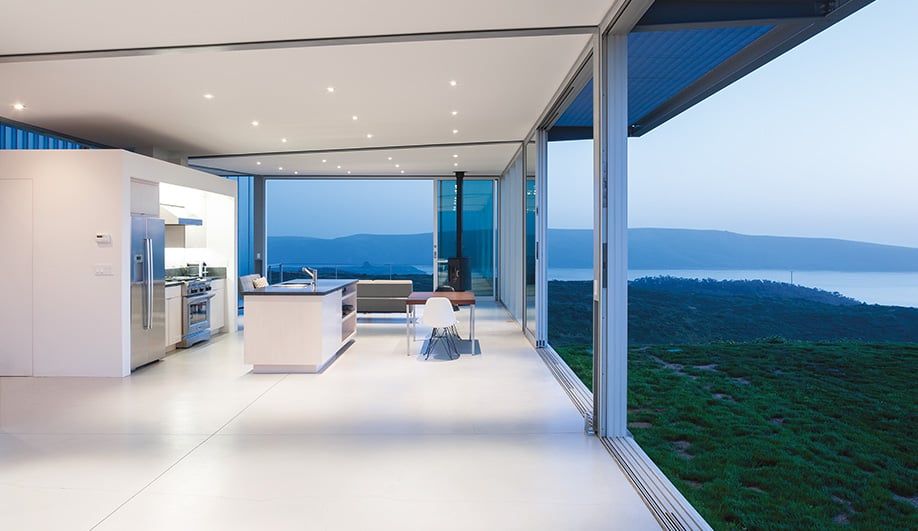 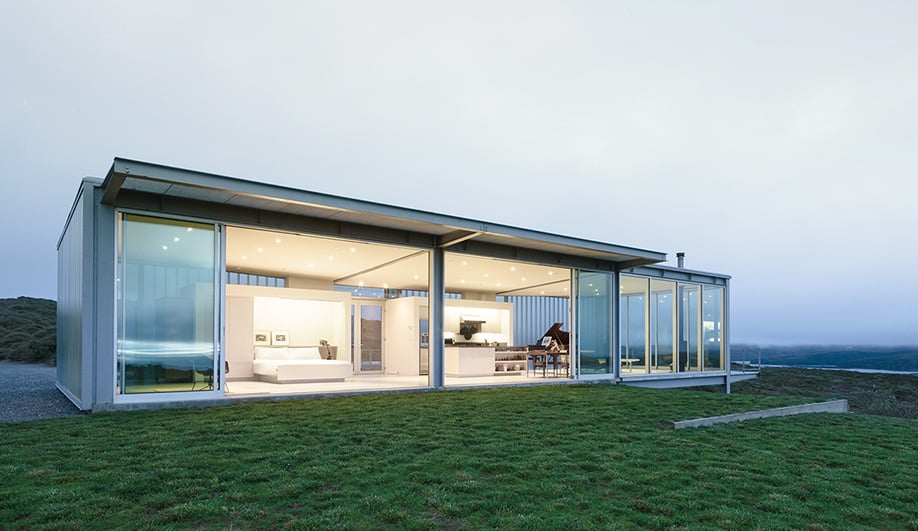 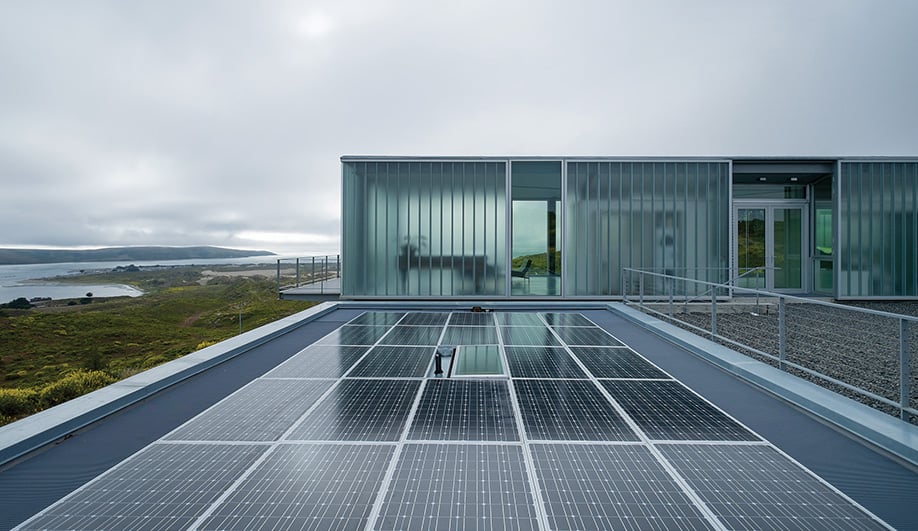 The subterranean guest house, nearly invisible from the driveway, is topped with solar panels by Sunpower.rn 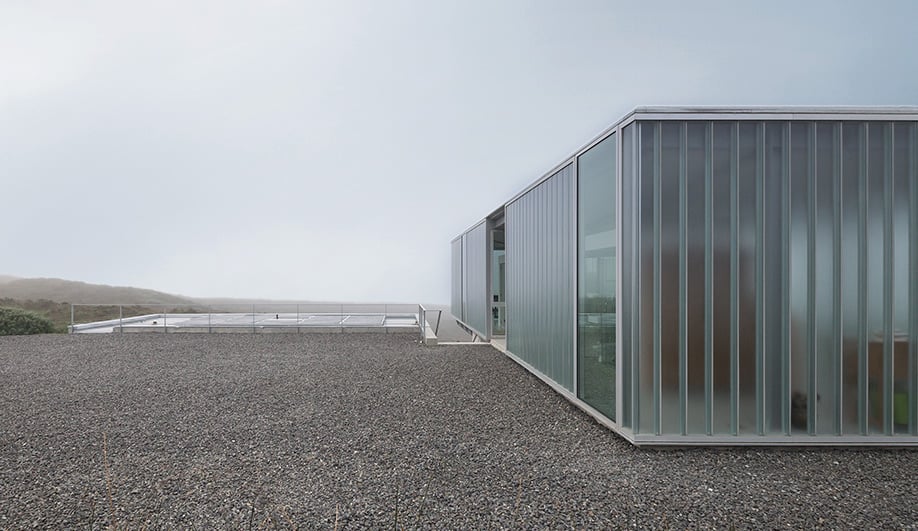 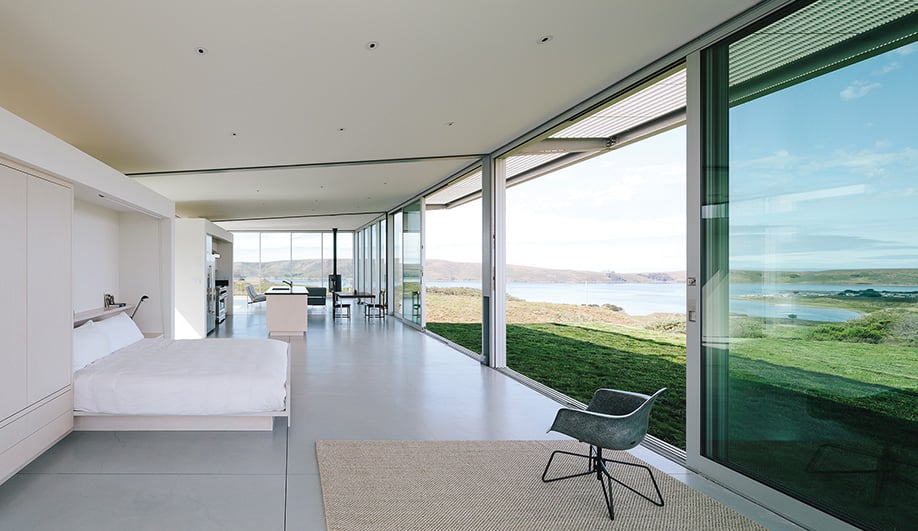 The cabinetry, including the kitchen island and a built-in bed, is made of birch plywood with a white pickle finish. Pulls by Sugatsune. 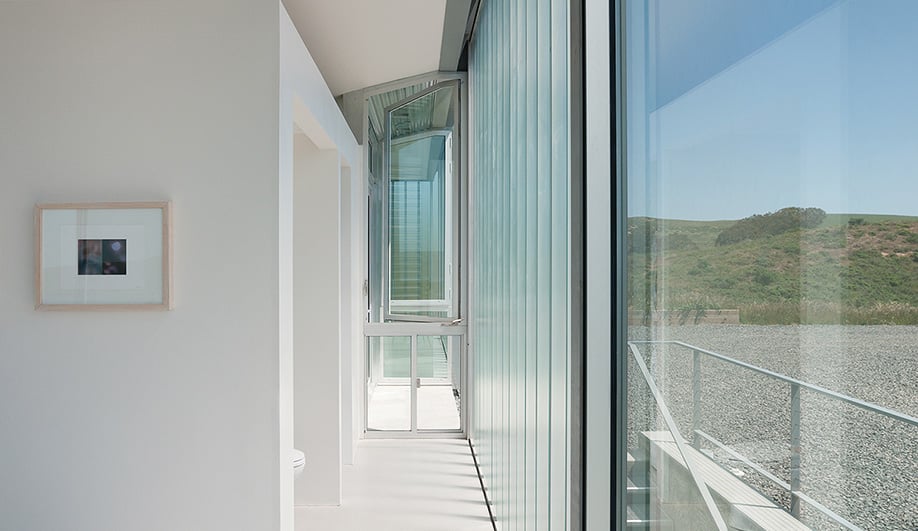 The bathroom and laundry area are hidden from view off the main space.

A day at C-Glass House begins with morning sunlight cresting the hillside and hitting the main structure’s eastward-facing translucent glass walls. Meanwhile, the two fully transparent western sides offer a clear, expansive view of Tomales Bay as it opens into the shimmering waters of the Pacific Ocean. Here on the coast of California, site selection, orientation, and material choices by Deegan Day Design come together in a house that both frames and adapts to the terrain. Call it architecture in landscape.

The remote 23‑hectare lot – located an hour north of San Fran­cis­co and surrounded by cattle and turkey ranches – was purchased in the mid-1990s by the client, Margarete Hachigian. She commissioned Joe Day, also her son-in-law, to come up with a design that would become her retirement home. The gist of the brief: a New York loft-type living space transposed onto a California landscape. “She wanted a minimal level of barrier between herself and the environment,” says Day.

The residence took more than a decade from conception to completion (Hachigian lived in an Airstream on the property during construction). It sits not on the water’s edge but on a compacted sand dune near a hilltop, all the better to capture the views. The total footprint is split between the 140-square-metre main house and a newly completed 55‑square-metre guest house, organized in a detached L shape with the former living space one level above the latter.

The upper volume consists of a single-level steel frame rectangle clad in glass. Rather than orienting the long axis of the shoebox toward the bay, Day angled a corner in that direction. The two sides that open up to the ocean feature full-height glass panels by Fleetwood, with three sets of sliding inset panels that allow you to watch turkey vultures soaring beyond, and to smell the sea on the stiff breezes that pass through the naturally ventilated space.

The sides that overlook the approaching dirt road feature double panes of pebbled, alkali-cast channel glass panels. The entire structure, which clearly echoes Mies van der Rohe’s Farnsworth House or Philip Johnson’s Glass House (take your pick), forms one contiguous space punctuated by two vertical columns. Bathrooms and laundry are hidden on the translucent side, while a bed and an open kitchen face the water.

The guest house is accessed by an external stair, giving visitors their own retreat. “Margarete liked her autonomy,” says Day. Where the upper volume partly rests upon columns above the dune, the guest house is built directly into the hill. Its rear side is the original retaining wall built to contain the granite gravel used for the driveway.

Concrete walls and Douglas fir ceiling beams lend a more cavernous country feel than the open minimalism upstairs, and the facade is clad in corrugated metal with just a few windows. As a result, the guest house feels more closely linked to the abundant chaparral than does the wide-open top portion.

The coastal climate can be rugged, with plenty of rain and fog, and winds that surpass 100 kilometres per hour. “With all the glass, you sometimes end up right in the middle of weather, like the reverse of an aquarium,” says Day. Because of the prevalent salt-kissed moisture, the external steel structural elements require regular repainting with Dunn-Edwards rust-bonding paint, more typically used on boat hulls. A five-by-five grid of
245-watt SunPower solar panels atop the guest house means that energy use amounts to less than $10 a month.

Sadly, Margarete Hachigian died in 2013, so the house has become a retreat for her children and their families. Still, Day has upheld her philosophy that the glass house have no curtains. As the sun sets over Tomales Point, layering stunning oranges and pinks against the skyline, darkness and stillness sweep over the outside world. The remote landscape that the architect sought to capture in daytime provides its own privacy at night. A glass house is not for peering into, after all, but for looking out of. ­