Designer Profile: Neri&Hu
Partners in both marriage and practice, Lyndon Neri and Rossana Hu nurture a whole new sensibility for China that crosses cultures and boundaries. 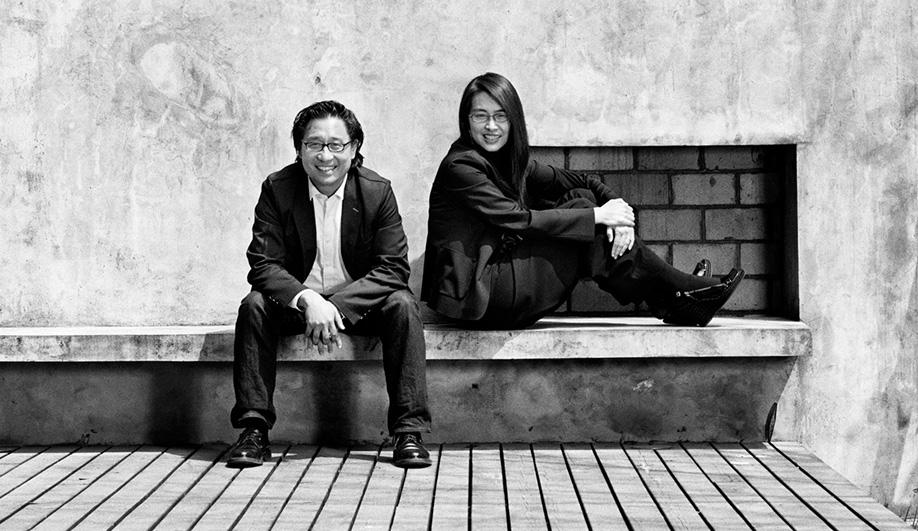 The couple met while studying architecture at the University of California, Berkeley. They both worked for architect Michael Graves before moving to Shanghai. 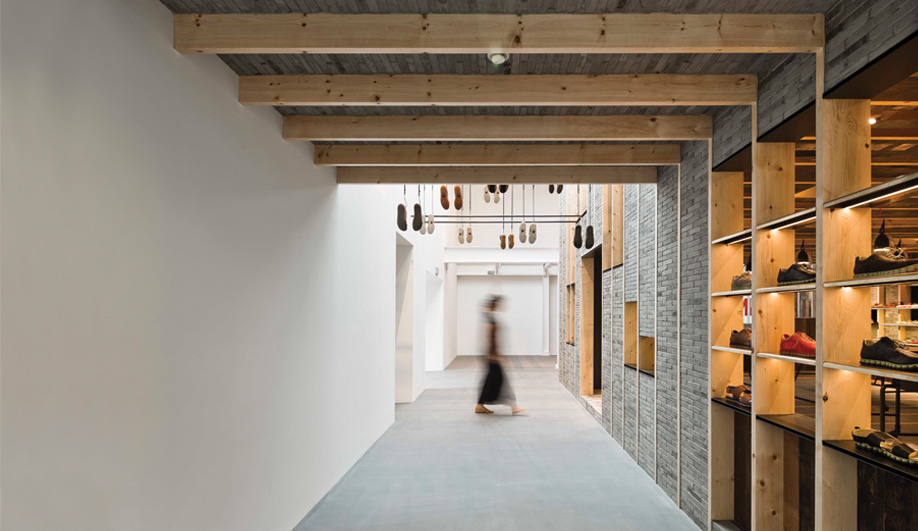 The new Camper store in Shanghai uses reclaimed wood and grey bricks, which are reminiscent of the city’s ancient alleyways. 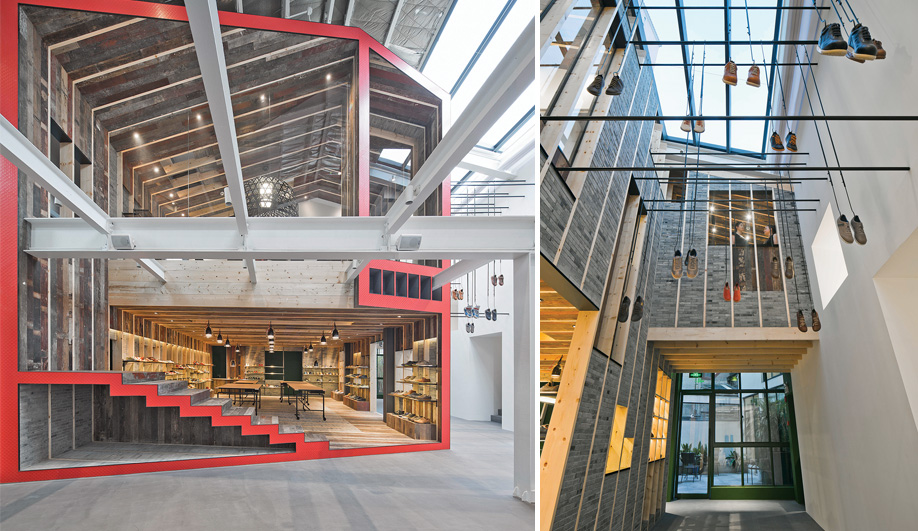 Left: The firm prefers a palette of natural tones and materials. Red is one of the few colours it uses regularly. Right: Camper shoes hang from steel rods, a gesture that references the old-world practice of hanging clothes between buildings to dry. 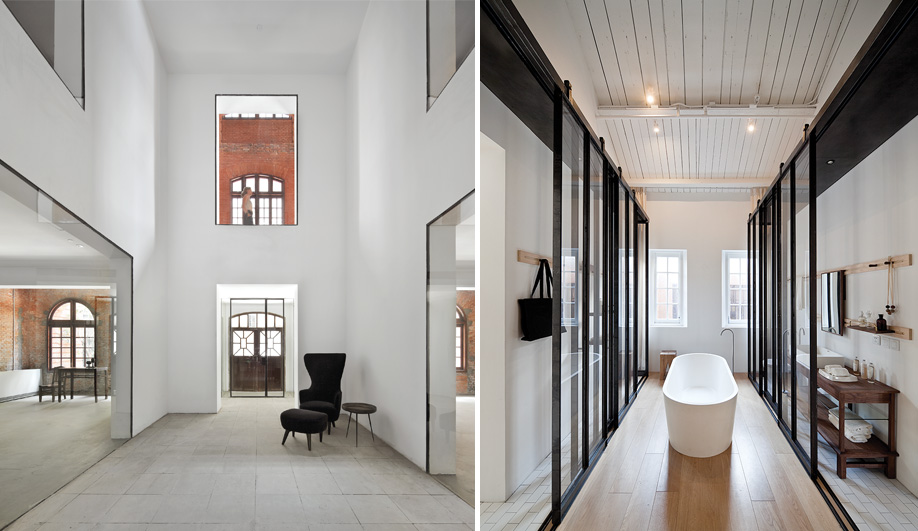 Design Republic is the retail arm of the multi-pronged business, with three locations in Shanghai selling international brands, along with the firm’s own product lines. 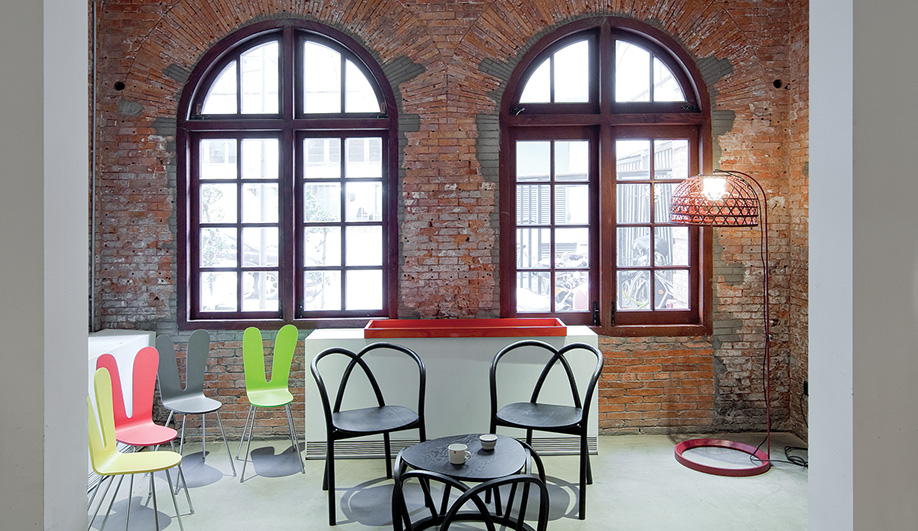 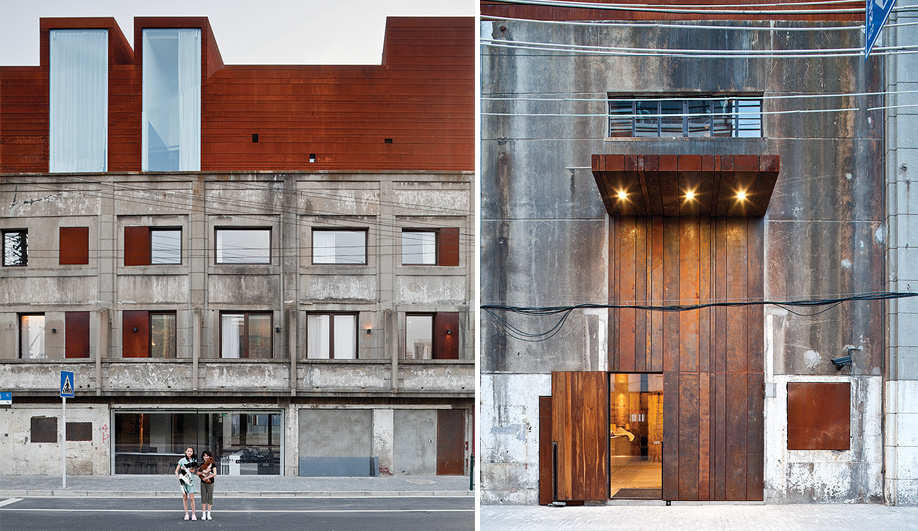 The Waterhouse boutique hotel in Shanghai was a landmark project for Neri&Hu, defining its sensibility for merging old with new. 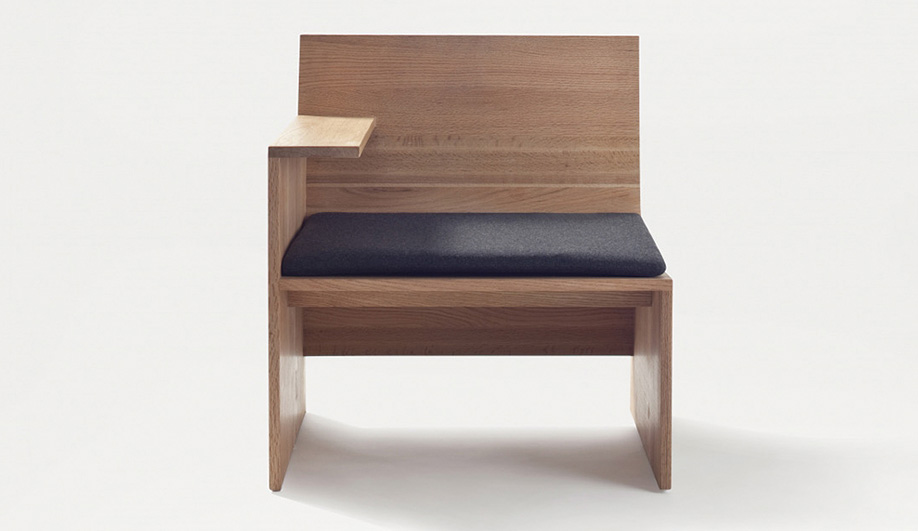 The firm designs furniture for various brands, but it also has its own line, which includes the Mu chair. 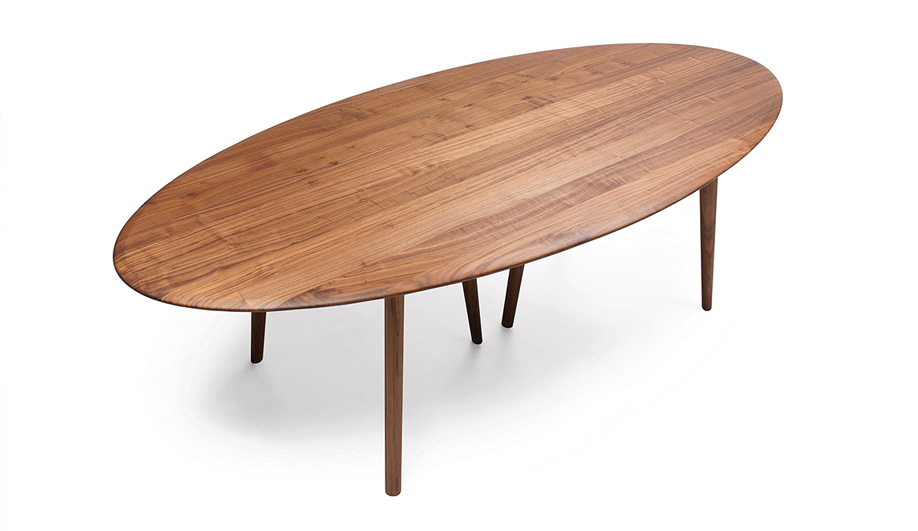 Solo Table is part of a larger family of wood furnishings including chairs and sofa, now manufactured by De La Espada. 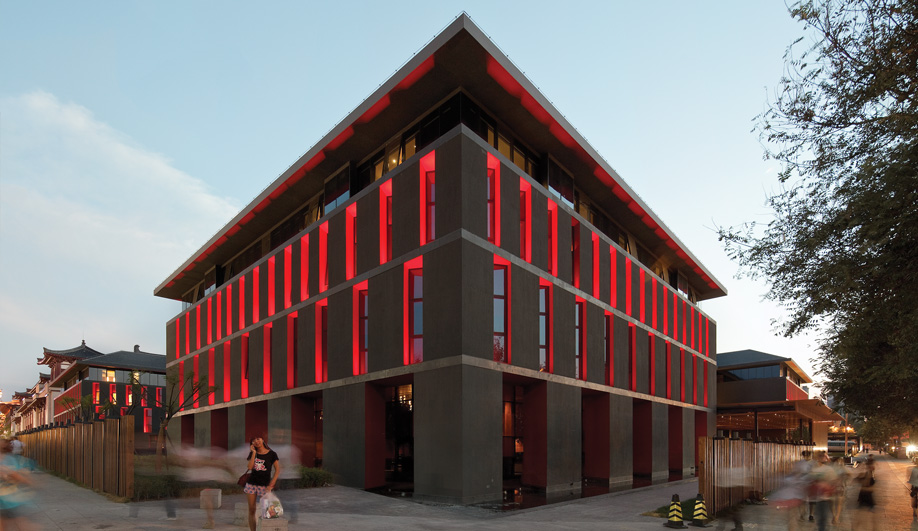 The Westin Hotel in Xi’an, the city renowned for its Terracotta Warriors. To reflect that ancient history Neri&Hu drew from the region’s vernacular, with bold red detailing and gently sloping rooflines.

Left: Inside the hotel, the surfaces are left raw, reflecting the building’s former role as a military base for the occupying Japanese army during World War II. Right: The hotel’s re­cep­tion area echoes traditional Chinese courtyards in the atrium, which is flooded with natural light. 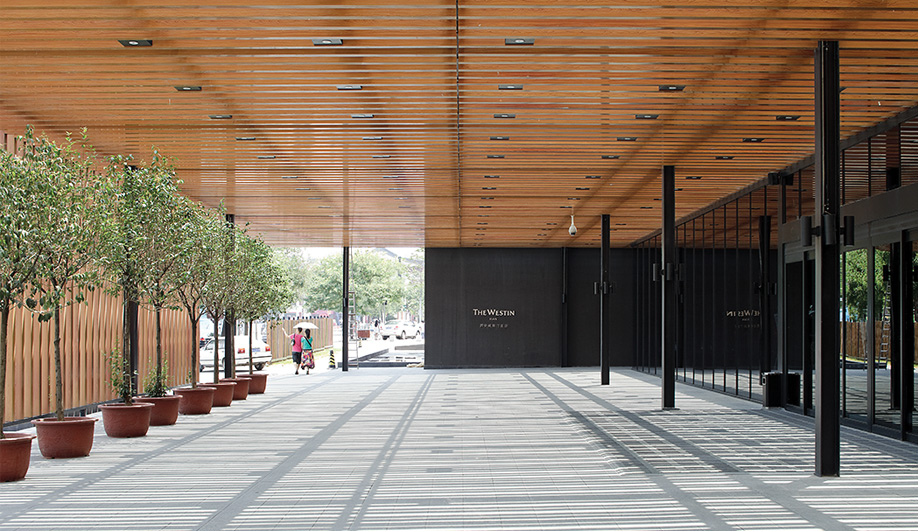 The 329-room hotel’s exterior heaviness is countered inside by canopies of wooden slats and wall screens that filter light through the interior. 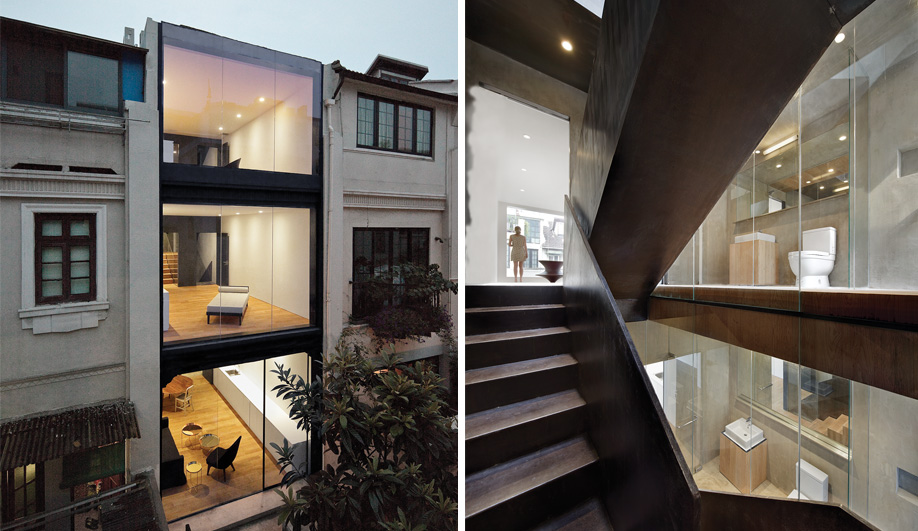 For a recent renovation of a 1930s townhouse in Shanghai, the back wall was removed and replaced with glass on all three floors. 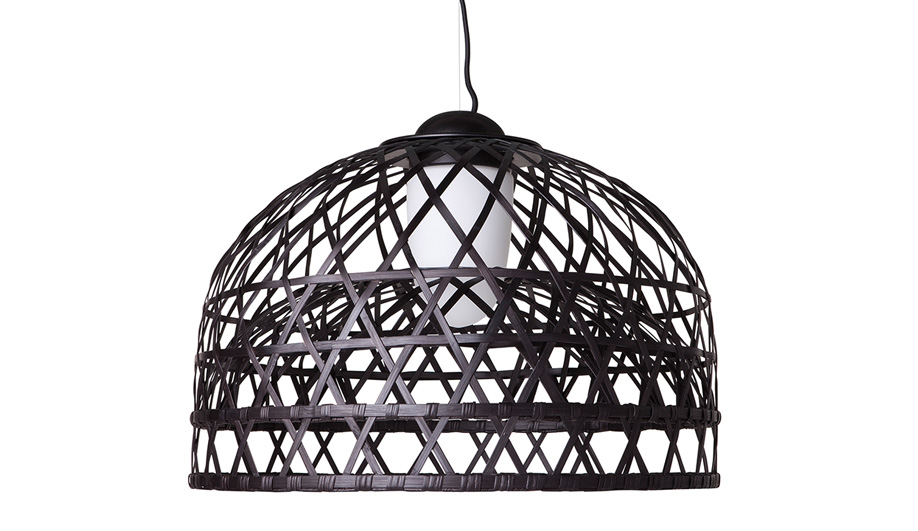 A bamboo rattan pendant based on bird cages, and a series of red stools that reference the ubiquitous seat-of-choice in China, are both new for Moooi. 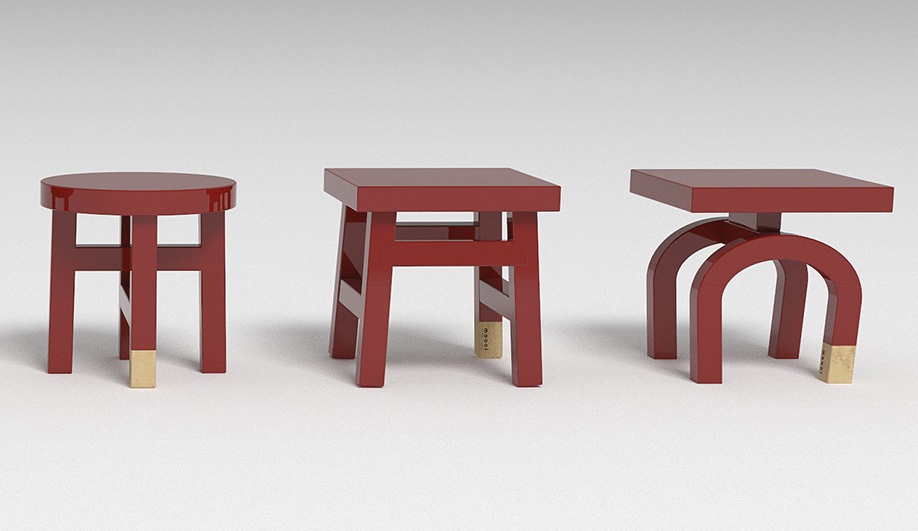 Lyndon Neri and Rossana Hu’s offices occupy a building called the Black Box. Located amid a row of white stucco residences in Shanghai’s former French Concession, its ink-hued facade is practically a billboard for the contemporary design produced inside. Large windows poke out of the five-storey structure, capturing views of the rapidly changing city.

Or maybe those windows are letting the people of Shanghai have a look inside one of the most dynamic architecture and design studios now working in China. The founding principals of Neri&Hu Design and Research Office have set up various businesses, everything from architecture and interior design to furniture design and retail venues. A branch of their Design Republic store occupies the ground level, while offices for a staff of 90 fill the floors above.

All of the detailing within the Black Box – including its warm wood entrance and rough-hewn ceilings, even the foam core models that fill a portion of a conference room – is carefully coordinated toward a singular look that is distinctly Neri&Hu. Even the bicycles lined up on the sidewalk out front seem part of a signature style that marries spare yet tactile materials with complex spatial layers and warm shades of brown and grey.

The patina look can be found in the numerous restaurants, hotels and residences the duo has designed since founding the studio in 2004. It can also be seen in their furniture designs for such international brands as Moooi, Classicon and Swarovski. “The way we look at material and form,” says Hu of their various projects, “it’s like everything is a little building.”

Other architects may dabble in product design, but Neri&Hu is well known in both worlds. The studio’s ability to seamlessly transcend boundaries may stem from the couple’s own cross-continental upbringings. Neri grew up in the Philippines and Hu in Taiwan. Both are ethnically Chinese, and both moved to the United States in their early teens, went to high school in California, and studied architecture at the University of California, Berkeley, where they first met. Eventually, they landed jobs at industrial designer Michael Graves’ studio in Princeton, New Jersey.

In 2001, the interior renovation of a concession-era building Graves was working on in Shanghai led the couple and their three children back to China. “People often ask me, when are you going back home,” says Neri, “but home is where Rossana and the kids are, and where we are contributing to the society. For now, that’s Shanghai.”

After the project finished, they began focusing on products. Venturing into product design was a welcome next step, and after collaborating with Graves they found that it came naturally. “We were tired from working on a brutal architectural project,” says Neri of the Graves job, “so we were looking for something that could be done quickly and that was immediately tangible.”

In 2006, they released Zisha Tea Project, a tea service made of zisha (purple sand) from Jiangsu Province, outside Shanghai. It embodied many qualities that now define all of their work, a merging of old techniques and textures within a contemporary milieu. “We were interested in natural materials that were customarily used in the Ming and Qing dynasties,” says Neri. “We’re trying to bring all of that back in a modern way.”

Eventually, they opened their own retail shop, Design Republic, to sell their products and to bring furnishings, lighting and accessories by such high-end manufacturers as Moooi and Classicon to China. The original store is now gone, but three other branches have opened in Shanghai, and each has sprouted auxiliary components, such as lectures, exhibitions and a magazine entitled Manifesto, making the venues more like hubs for contemporary culture.

The flagship store was not their first architectural project, though. Y+ Yoga and Wellness Center in Shanghai and restaurants in Bangkok and Beijing predated it. But the store established a house style that also appeared in the Waterhouse, a boutique hotel they designed in 2010, which became a tipping point for more international commissions. The hotel is housed in a 1930s former headquarters for the Japanese army during World War II.

“We saw a remnant of Shanghai that we did not want to get rid of,” says Neri of the site’s notoriety. The architects maintained many of its features, including the raw concrete exterior and interior surfaces, and they added weathered steel to the outside and filled the sparse interior with refined furnishings. It is topped off with a roof deck that offers views of the Huangpu River and Shanghai’s skyscrapers.

The Waterhouse gained attention locally and internationally for effectively merging the sensibilities of East and West. “We are conscious of getting projects abroad,” says Hu of striving to keep their work relevant in both worlds. “We need to be able to influence outside of China as well as inside.” To do so, the firm regularly employs foreign designers to bolster global discussions. “An international think tank is important in creating a new Chinese voice,” says Hu. Neri adds that other offices in China are contributing to this idea: “We don’t want to be doing it just ourselves. Hopefully, a group of people will come together and make a difference.”

As for the day-to-day running of the business, they say there are no strict divisions of labour. It’s their complementary personalities that help get things done. He is spontaneous; she is more structured. He’s emotional; she’s logical; he expresses himself in drawings, while she prefers concepts. “We think very differently,” observes Hu, “and that has really helped us to balance our work.” Neri adds, “If a project was led only by me, I think it would go crazy. If a project was entirely led by her, it would be completely monastic.”

Their working partnership, now nine years old, is taking on new directions. Last year, the firm completed its largest architectural project yet, a 100,000-square-metre Westin Hotel in Xi’an, the cradle of Chinese civilization. It has also broken ground on a residential and hospitality complex in Suzhou with 51 free-standing villas.

Two smaller offices have just opened in London and New York to manage projects in both cities. And with new work in Brazil and Mexico, the global presence of Neri&Hu seems to have no bounds. “We want to maintain a healthy mix,” say Neri. “We’re consciously doing big projects, but we’re just as interested in small ones.”

The firm has been selected by IMM Cologne to create its 2015 Das Haus exhibit.