10 Provocative Designs Inspired By the 2016 U.S. Election
As America’s most colourful and controversial presidential election campaign nears its final hours, we look at the most comical, sad, satirical and poignant artworks, designs and concepts inspired by Hillary Clinton and Donald Trump. 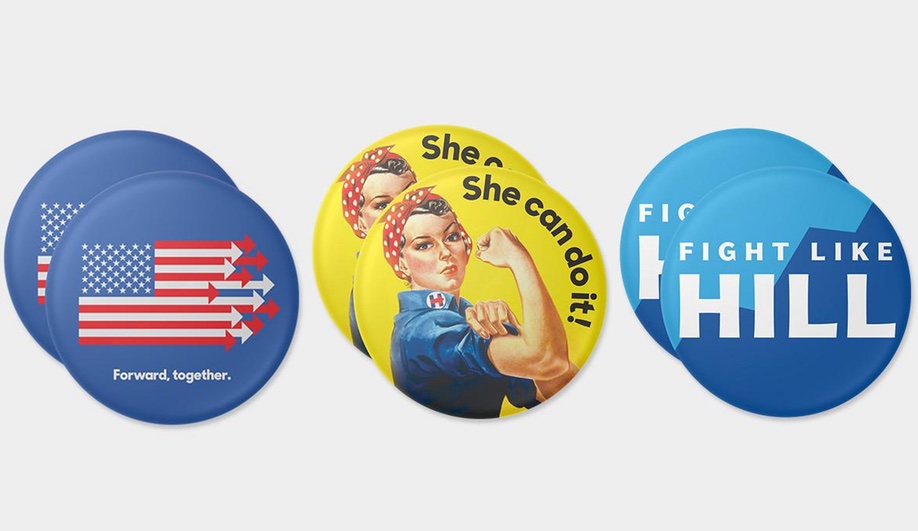 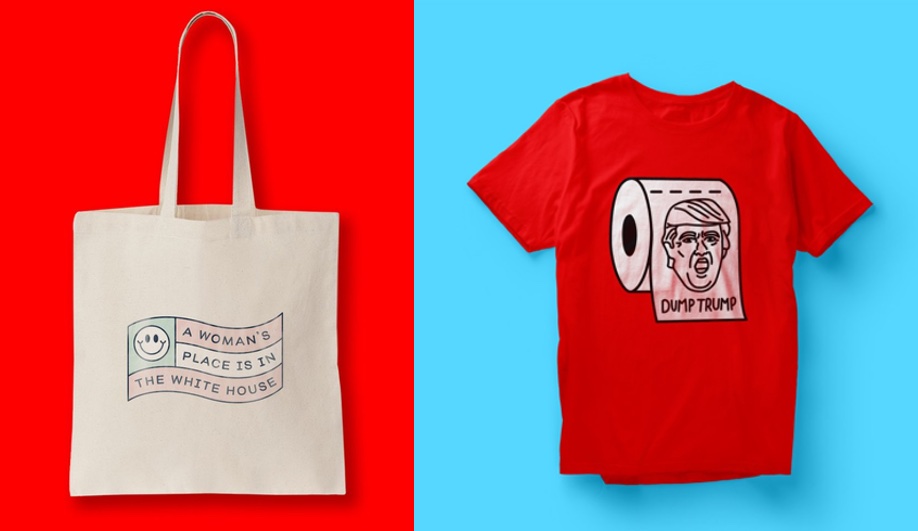 1 Pins Won’t Save The World by Sagmeister & Walsh
Clever pins and sassy t-shirts won’t save the world (or sway an election), but they are a fun way to wear one’s political tastes on their sleeves. NYC design firm Sagmeister & Walsh commissioned its friends and colleagues to create anti-Trump, pro-Clinton illustrations that they then turned into tote bags, patches, stickers and temporary tattoos, in addition to the tops and buttons. All profits raised will be donated to Amnesty International’s #AmericaIBelieveIn campaign. 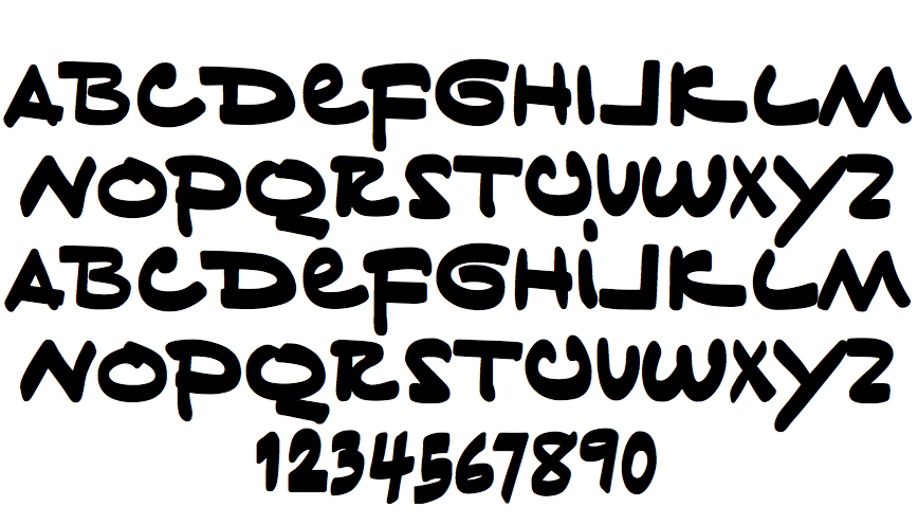 2 Tiny Hand font by BuzzFeed
Worse than Comic Sans? That’s the point of this Trump-inspired font by BuzzFeed graphic designer Mark Davis. After stumbling upon examples of Trump’s eccentric handwriting – he often scrawls at an angle, apparently, and in thick Sharpie, switching between upper- and lowercase at a whim – BuzzFeed deputy art director Ben King asked Davis to digitize the letters. The result is Tiny Hands, a free-to-download typeface. 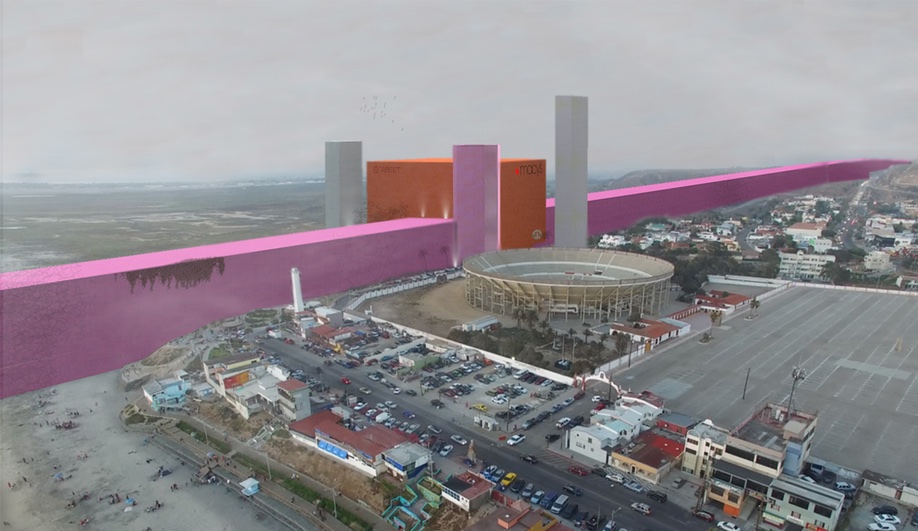 3 Trump’s Mexico border wall, imagined by Estudio 3.14
Trump’s proposed border wall has been imagined as a candy-coloured divider by interns at Mexican design firm Estudio 3.14, with the help of professor Hassanaly Ladha from the University of Connecticut. “Because the wall has to be beautiful, it has been inspired by Luis Barragán’s pink walls that are emblematic of Mexico,” the firm said of its concept. “We hope that these visuals will allow the public to imagine the policy proposal in all of its gorgeous perversity.” 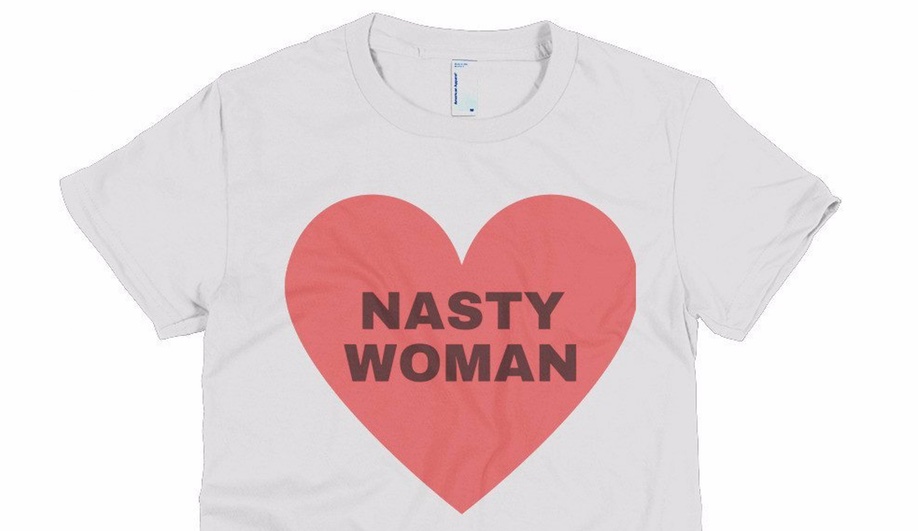 4 Nasty Woman t-shirt by Google Ghost
It was the debate soundbite that inspired a million tweets, memes and yes, apparel. It took mere hours for this online shop to pop up, selling only three items: a sweatshirt, t-shirt and tote bag emblazoned with “Nasty Woman” contained within a heart. Fifty per cent of proceeds raised benefit Planned Parenthood. As of October 21 – only two days after the quote entered the global consciousness – over 10,000 orders had been placed. 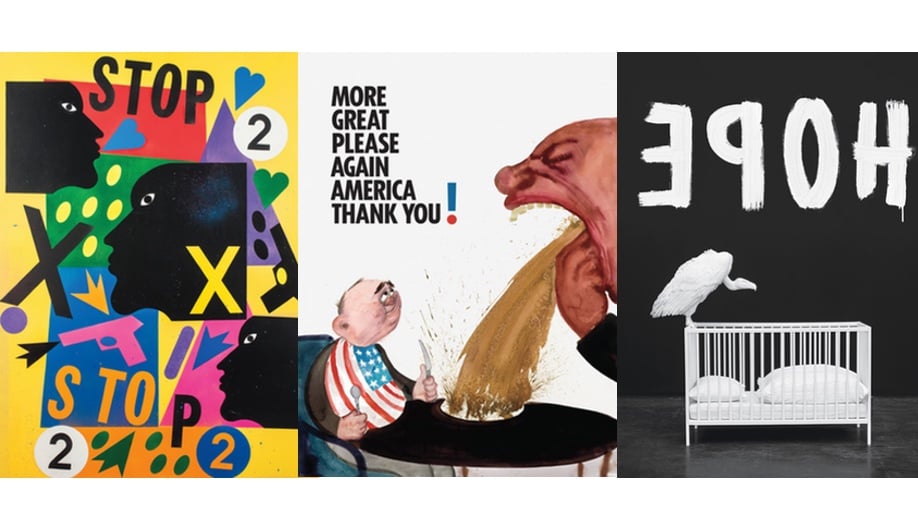 5 W‘s commissioned posters by various artists
For its 10th-anniversary art issue, the magazine asked 15 different artists to dream up their own versions of a campaign poster. On the left, Nina Chanel Abney draws inspiration from Matisse to illustrate the Black Lives Matter movement and the relationship between people of colour and law enforcement. Painter Sanya Kantarovsky employs dark humour and retro poster design in his creation, centre. And on the right, artist duo Elmgreen & Dragset leave room for interpretation (hope? or hopelessness?). 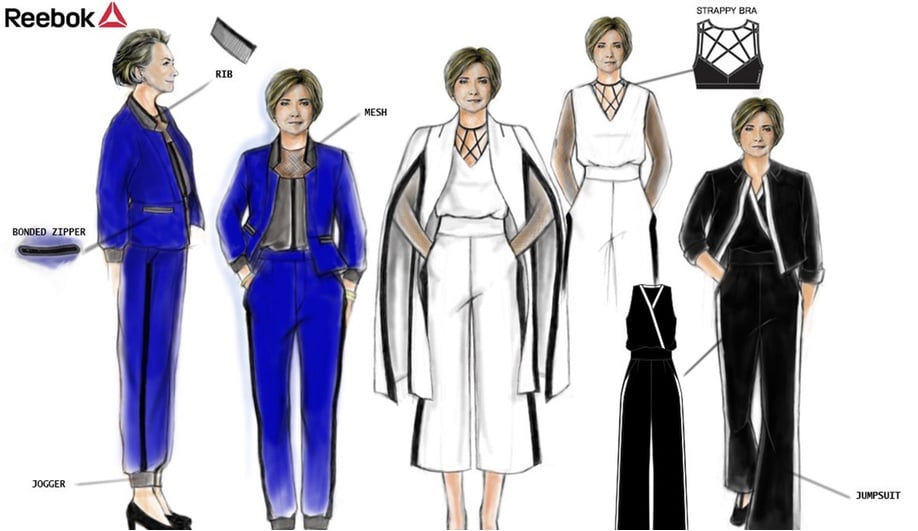 6 Pantsuit concepts for Hillary Clinton by Reebok
Ahead of the final presidential debate, Reebok imagined a chic, leisure-inspired wardrobe for Clinton. The collection of “performance pantsuits” would be spun from ActivChill, a high-tech fabric that would help Clinton keep cool (literally and figuratively) on stage. A royal blue option features a jogger pant, while an on-trend caped style includes a strappy bra that peeks out from beneath a white blouse.

7 The Forty-Five Pin Project by the Clinton campaign
Clinton’s team invited 45 artists and graphic designers to create a campaign button that embodies their support for the Democratic candidate. The pins are available for purchase online, in sets of two or three for $4 or $5. 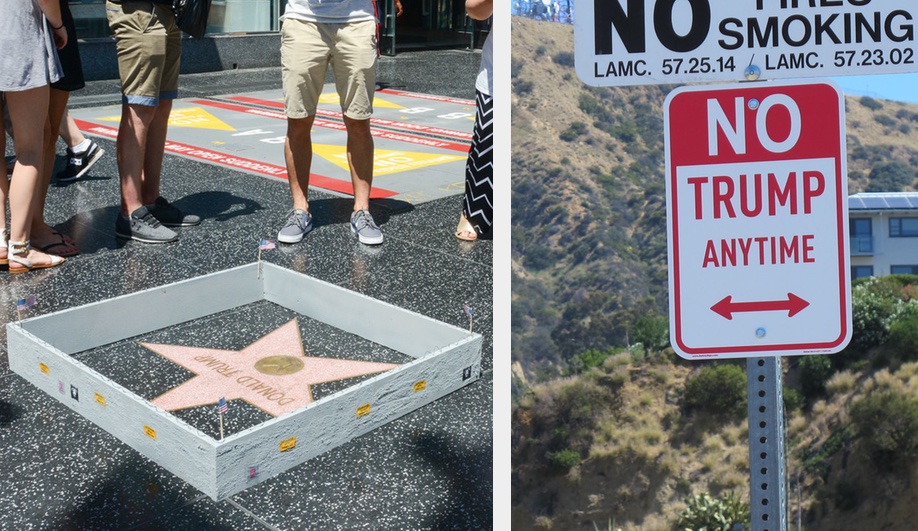 8 Street art by Plastic Jesus
Political and satirical artworks are the specialty of Los Angeles-based street artist Plastic Jesus. He made the social media rounds with the wall he constructed around Trump’s star on the Hollywood Walk of Fame; details include barbed wire fencing and vandalism that reads “Stop Making Stupid People Famous.” Other election-inspired works include his anti-Trump twist on parking signs, sneakily installed in New York, Chicago, Miami and L.A. 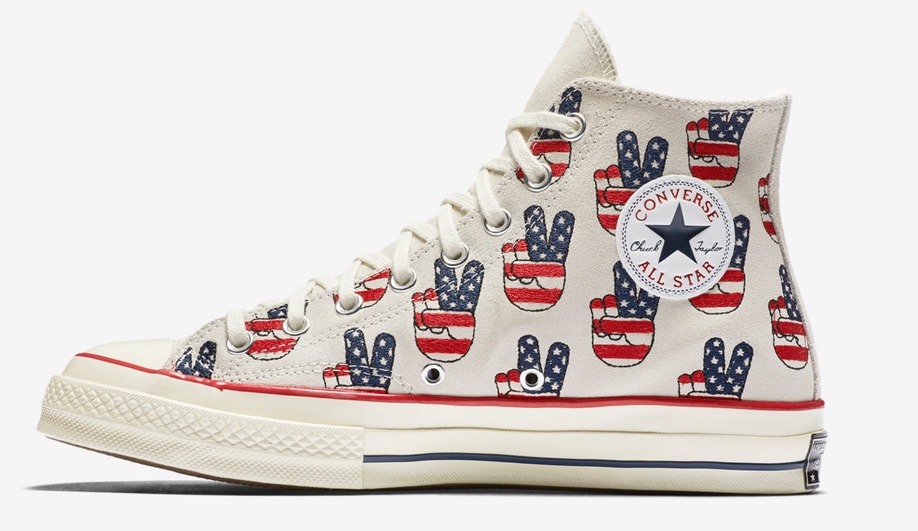 9 Election Day High-Top by Converse
The 70s-era high-top is given the presidential treatment, with Americana peace sign embroidery on the shoe’s suede upper. No word on whether the kicks will be available post-election. 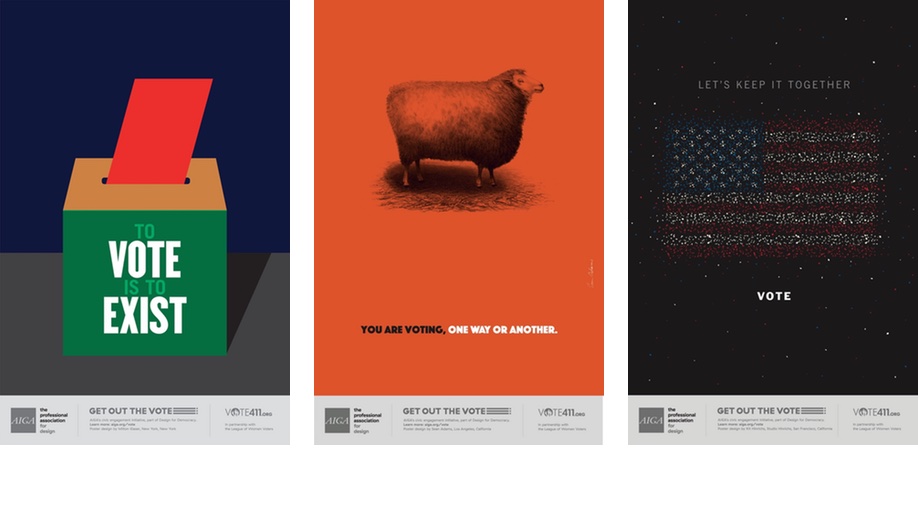 Left: ‘To Vote is to Exist’ by Milton Glaser. Centre: ‘Don’t be a Sheep’ by Sean Adams. Right: ‘Coming Together or Coming Apart?’ by Kit Hinrichs.

10 Get Out The Vote posters by AIGA designers
Since 2004, the American Institute of Graphic Arts has invited designers, artists, typographers and students to create campaign posters that motivate and inspire the American public to vote in elections. The AIGA’s 2016 campaign, Get Out The Vote, now has a gallery of over 670 original and non-partisan posters, available for printing and distribution. Renowned designer Milton Glaser is one famous participant; his design can be seen on the left.